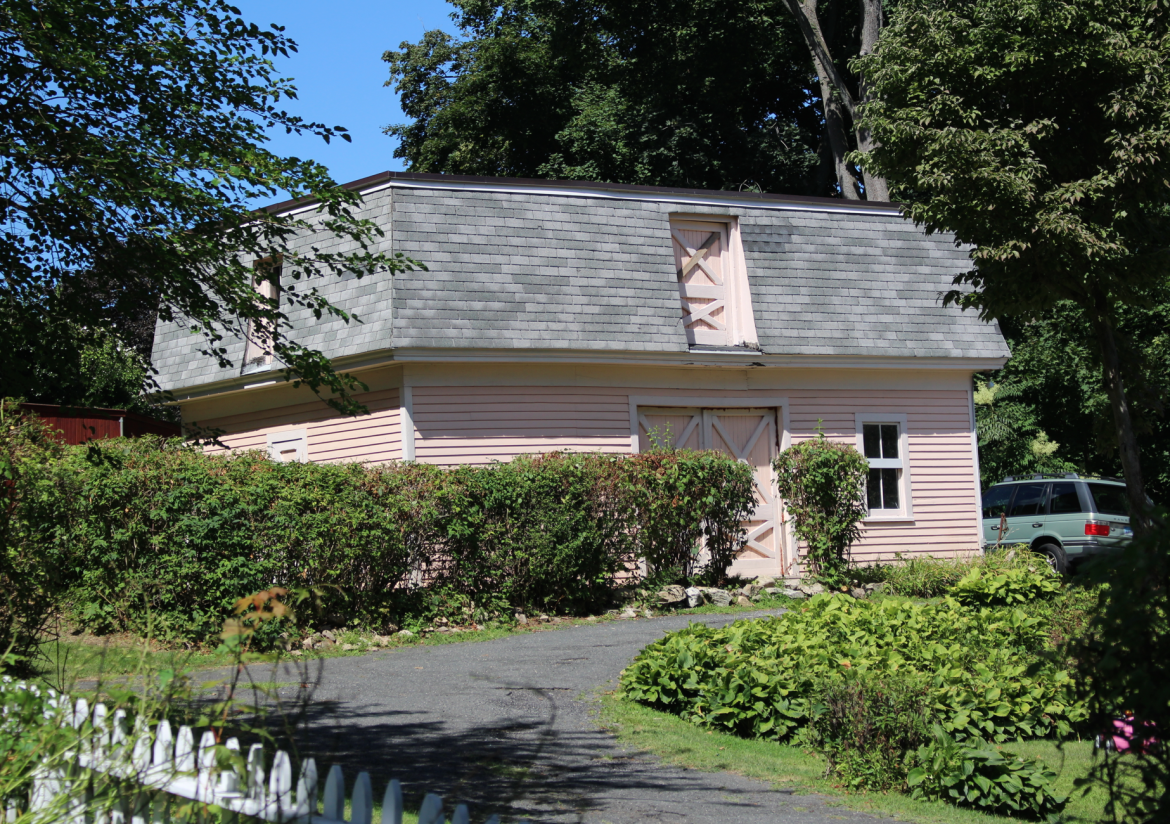 E. Don and Eileen Smith, owners of property at 35 Strickland Rd came before the Zoning Board of Appeals on Wednesday night with a request for a variance to permit an accessory structure to remain on a lot without a primary structure.

The structure in question is a two-story barn that dates back to 1870.

The Smiths, who are in their 80s, wish to sell the property, which they have owned for 32 years. The couple want to retire away from Greenwich, but they’ve been in a bind for many years because zoning does not allow an ancillary structure to exist on a lot without a primary structure.

The couple already received permission for a lot split into two, and a stucco one-story house dating back to 1915 is separate from the lot with the barn. The Smiths said they originally sought to split the lot into three, but were declined by P&Z who wanted to preserve the historic streetscape. 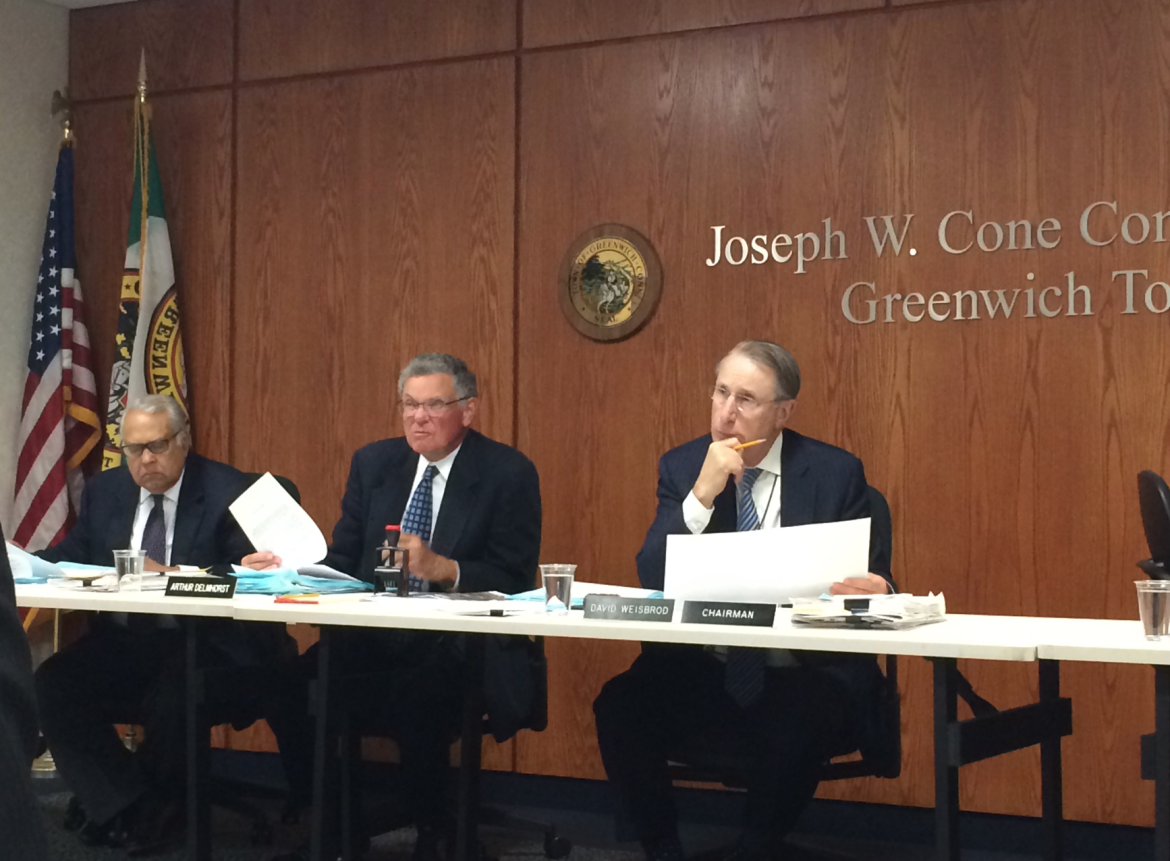 The 1870 historic barn, which has double doors on three sides for horses and is painted pink, was built at the same time as the yellow Victorian next door. The entire property was originally 4.5 acres, but about a dozen parcels were sold off over the  years. The barn, which was originally the horse and buggy barn for the yellow Victorian, to this day has no running water, no sewer line, no gas, no electricity.

The barn retains its original floor. Even the foot troughs for horses are still in tact.

Mr. Smith said that up until the turn of the century, there were only 3 or 4 houses on the whole street, which was named Sinoway Drive but was renamed Strickland Rd in the late 1890s.

Mr. Smith defined the authority of Historical Society as one of “keeper” for the historic district, but said they have no legal authority or jurisdiction over it. Only the Historic District Commission has authority over demolitions or new construction of historic properties. 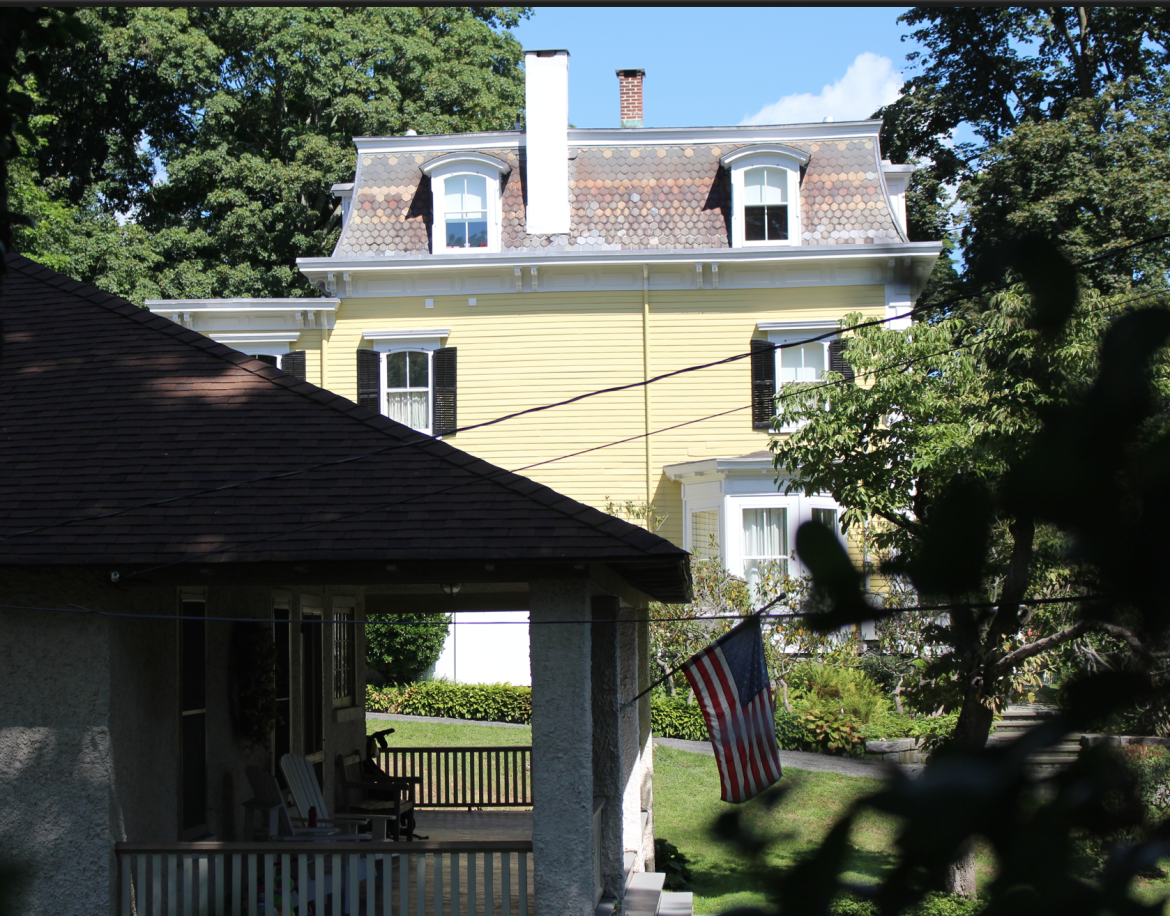 The 1870 pink barn was originally for horses and buggies belonging to owners of the adjacent yellow Second Empire style house on Strickland Rd, The Amos Brush House. The stucco house in the foreground, belongs to the Smiths, but was split off from the barn in a lot split they were given permission for.

Mr. Smith said he is in a quandary because the barn can’t be sold as an accessory structure.

“If you deny the variance, you are in effect asking me to demolish the structure,” Smith said, adding that that was the last thing he and his wife wanted. He explained that even if they were to try to demolish the barn, the Historic District Commission would decline permission. “That puts me in a quandary,” he said. “The way this is written by Planning and Zoning ties my hands.”

Mr. Weisbrod said his board was in receipt of a letter of opposition from three different neighbors — Faith and Darius Toraby and Suzanne Branch. The neighbors requested the matter be taken before the Historic District Commission next month (Sept. 9) prior to being adjudicated by ZBA.  “If you want to turn it into a house, then you go to HDC. That is their mission, no question,” Mr. Weisbrod said. 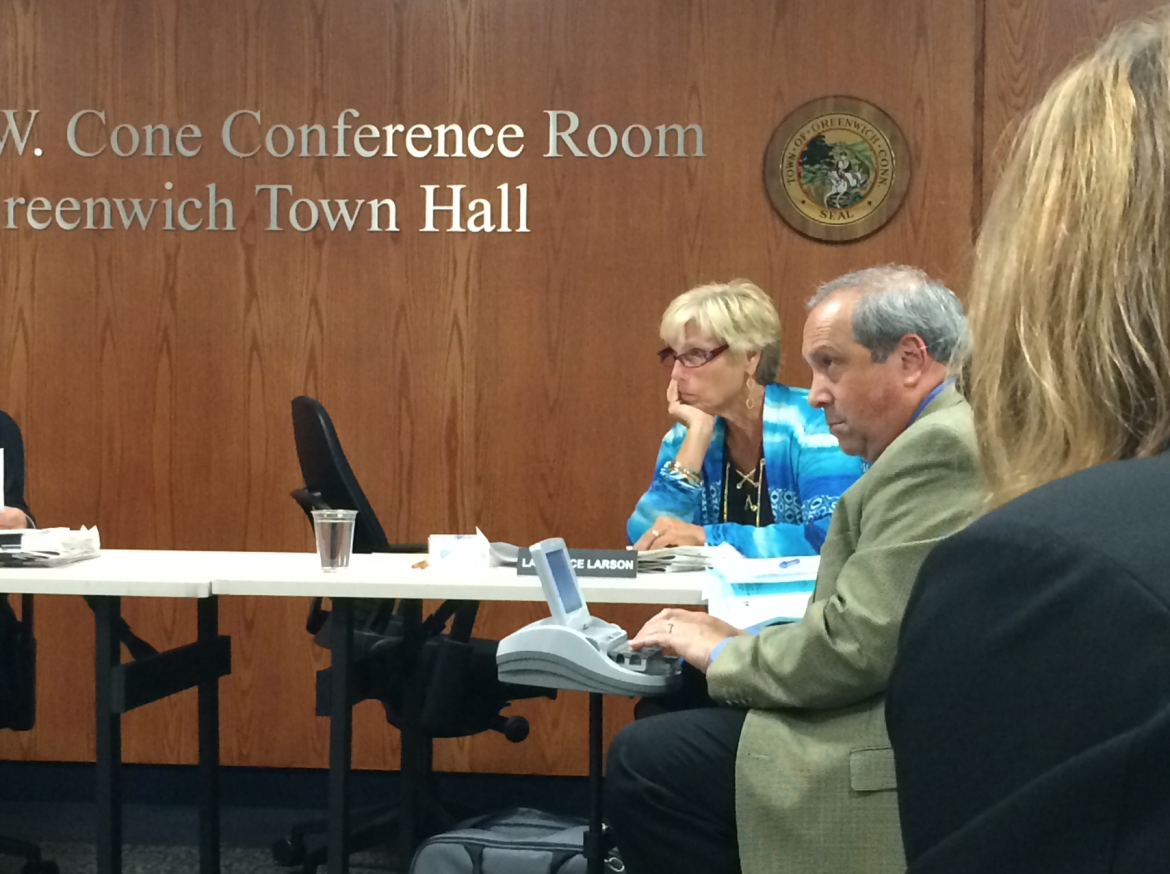 Patricia Kirkpatrick of the Zoning Board of Appeals listens to testimony on Aug. 12, 2015.

“I can’t sell the property. Period. As one piece or two pieces,”  Mr. Smith said. “Unless you grant that it can exist.”

Smith said he had approached the Historical Society asking if they’d like to buy the property. “They have seven properties already. It would seem logical. They liked the idea but had their hands full with another big project,” he said.

Davidde Strackbein, chair of the board of the Historical Society spoke of the value of the barn. “The barn is a pristine building and it would be wonderful if it could be preserved,” she said.

“None of us want to see such a treasure destroyed,” Mr. Weisbrod agreed. “This is really more of a zoning question. What can be done by this owner or subsequent owner without getting approvals of HDC or landmarks authorities. Our variance is simply about allowing it to exist in order for it to be relinquished, or sold. Who has the authority to preserve it? It’s not us.  It’s completely murky. Our decision does not effect whether the building is demolished or not.”

“It’s a real dilemma,” Mrs. Strackbein said. She explained that Bush Holly House is a national historic landmark, but the barn is not. “It is in the historic district. They have to preserve it as it is, ” she said.

Mr. Smith said there was no reason to put the matter before the HDC because the commission’s desire to preserve the barn is a given, and any plans for the barn in future would go before the HDC.

“We want to keep the barn. We want to sell the property. We’ve been through a lot with this property in Greenwich. You’re saying develop it. We’re too old to do that. We want out. Please help us,” said Mrs. Smith.

“We’re trying to sell the property so we can go away. What you’re doing is stopping me from being able to sell it any any way because of this variance. It’s a catch 22,” Mr. Smith pleaded. “We want to sell the lot with the structure on it.

Jodi Couture explained that the Smiths can’t declare the barn “a dwelling” without first getting a certificate of occupancy.

During deliberation Ms. Kirkpatrick said similar situations around town set precedent. “If we were matching it up to other lot splits where we’ve been asked to keep an accessory building we’ve said, yes it can stay. It’s the new owner’s job to figure out how to deal with the accessory.”

“I’m in favor of HDC keeping the building alive, but in this case I would make a motion and vote to approve based on precedent set in the past,” Ms. Kirkpatrick said.

Ms. Kirkpatrick made a motion to grant the variance.

The board agreed that although the lot split caused the problem and the lot split was granted after the existence of zoning, the applicants did have “hardship” earning them the variance based on the structure predating zoning and the odd shape of the lot.

“The best thing is to leave it up and see if someone can do something with it,” Mr. Weisbrod said.

The ZBA voted unanimously to grant the appeal for a variance.