The fireworks arrived close to midnight on Monday’s Wetlands Agency meeting at Greenwich Town Hall to consider construction of a 355-unit apartment building 105 feet from wetlands, and driveway 10 feet from wetlands. The meeting, a continuation from April 5, was another long one, running almost 5 hours. 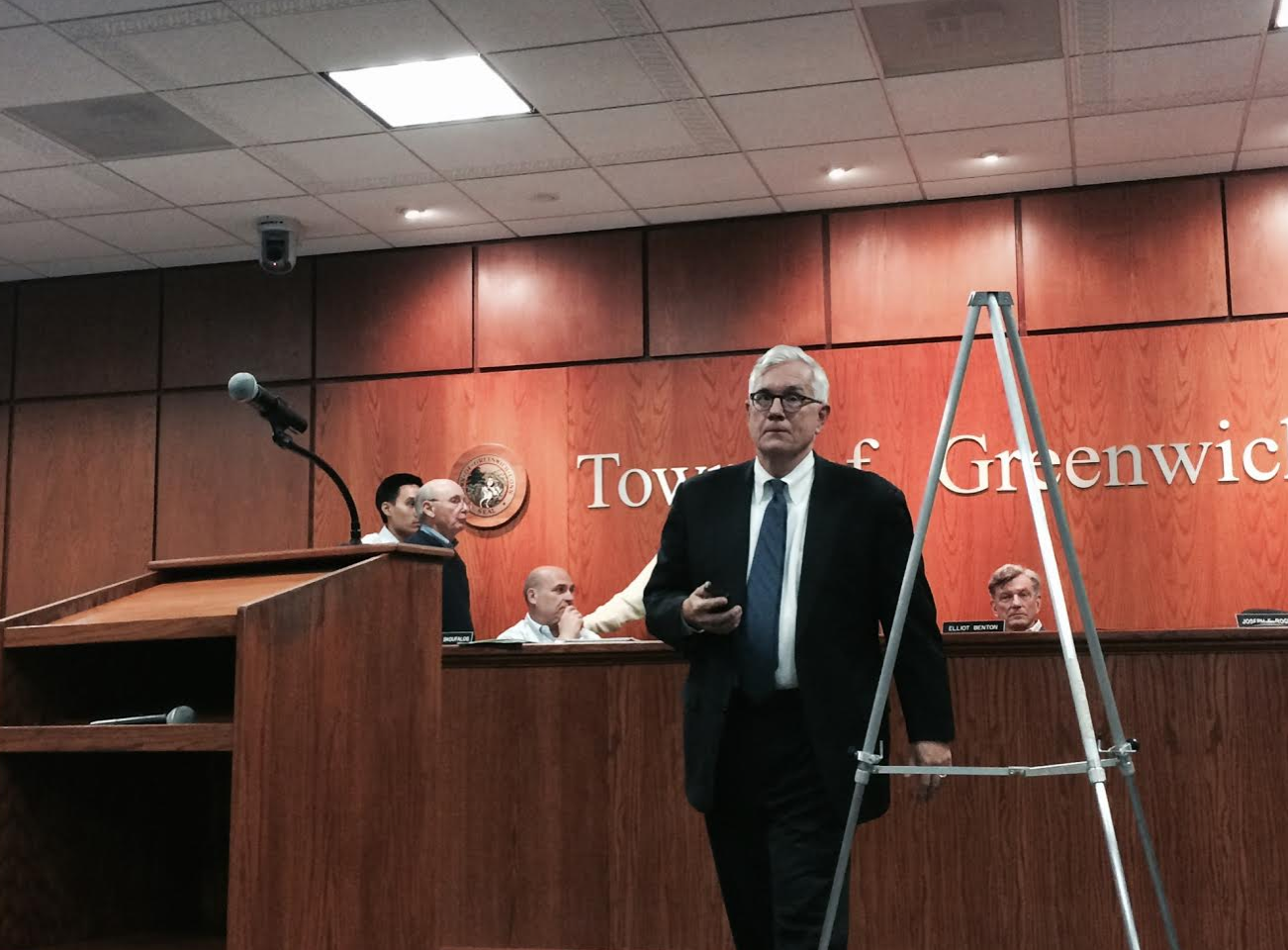 A moment of levity came close to 11:30pm when an agency member told the applicant’s attorney, “Now you know why we objected to a fee reduction.” The comment was a reference to the applicant’s attorney Steven Studer’s first appearance before the agency requesting a reduced application fee from about $35,000 to $12,000. The request was roundly denied. The Agency is set up so that the fees cover the costs of running the department, and the proposal is consuming a great deal of staff hours.

Unlike April 5, however, many of the residents who have attended earlier meetings were absent, likely to attend the RTM vote on the municipal budget. Nevertheless about 25 people sat patiently from 7pm until about 11:30pm. 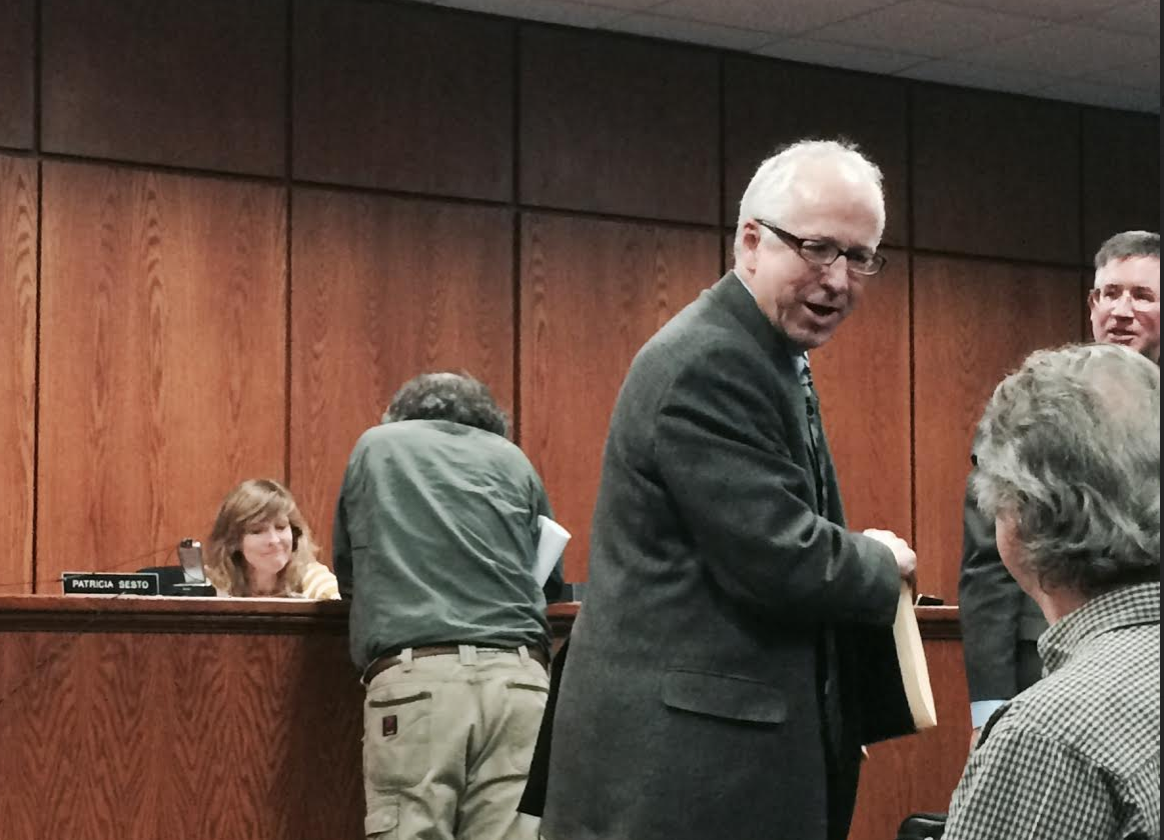 The elephant in the room was the 355-unit apartment building the applicant seeks to construct on the Post Road Iron Works site, which continues to fabricate steel after nearly a century.

Unlike the Planning and Zoning meeting, there was no talk about where the children would play considering there are no outdoor amenities, but for 5 ft balconies and two small indoor courtyards. In fact the proposed 400,000 sq ft, 5-story, 355-unit apartment building with two levels of underground parking, was hardly mentioned except for details on the gravely soil medium and mostly sedum that would grow there.

Remediation
Carver Glezen, of Titan a Licensed Environmental Professional with Triton Environmental said Phase 3 testing of groundwater samples were below all standard criteria and require no remediation. Also, he said, “The presence of the soil release areas has not resulted in any measurable groundwater impact that would require remediation.”

Glezen said an environmental professional would be present during soil removal and contractors are instructed to stop if they see stained or dark soil. Glezen said there would be a professional on site or on call at all times. 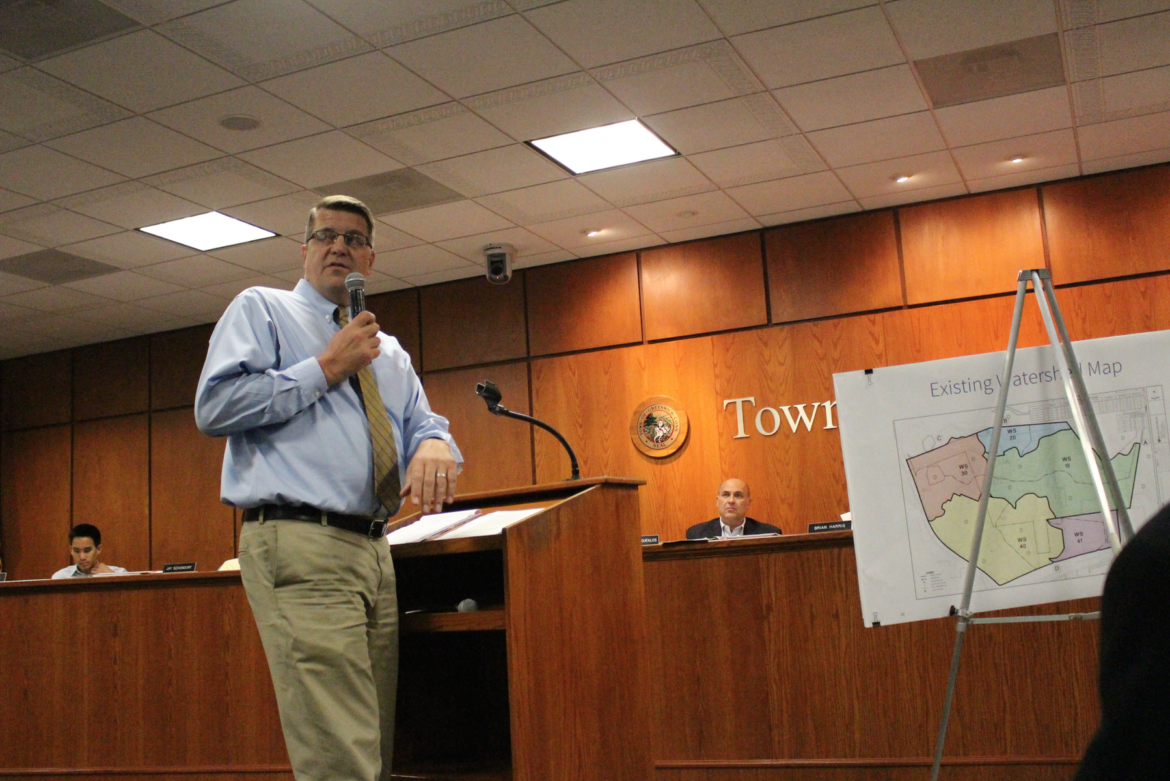 Disposal Records
Asked Glezen was asked about testing of the pond and culverts. He said there were detentions of metals in the samples and outfall location that receives road runoff and a lower level. Additional sediment sampling and statistical analysis would differentiate impacts from site versus road runoff.

“The questions is whether there is risk for the flora and fauna. There are no set cleanup standards,” he said.

“Zinc, lead and arsenic are naturally occurring,” Glezen said. To compare, he said, “We’d have to go to a nearby area where you’d expect no impacts from human activity.”

Mr. Carr asked Glezen about ETPH (extractable total petroleum hydrocarbons). Mr. Glezen said the pond was further from iron works than the road,which he suggested was the source of motor oil, gasoline and exhaust.

Glezen agreed that more sampling needed to be done.

“I’m looking at ETPH levels, lead, selenium, cadmium, arsenic, zinc – all extremely high in that pond at the edge of the drainage pipe, and seems reasonable it came from the pipe,” Carr said. “It would be the burden of the applicant to show the contamination came from the roadway.”

Mr. Studer said site could be safely remediated and contamination removed. “We are not walking away from our legal responsibilities as a good citizen. But this is not something we need to fully characterize now.”

“Why didn’t you test the pond then?” Mr. Harris asked.

Glezen said the pond remediation is not part of the scope of the project, as it is on an adjacent piece of property.

Waste Disposal
The agency pointed out that in 2012 there was a change in waste disposal procedures, and prior to 2012, there was very little documentation of disposal records. Mr. Glezen said the underlying assumption was that the rate of generation of waste was constant, and that he’d the calculated rates of waste generation using manifest information and purchase orders.

Mr. Gleezen said there is a monitoring well on site, and that it’s unlikely a leak from a storm water line would cause enough contamination to require a soil clean up.  But he recognized the wetlands had yet to be tested.

Joe Rogers said there was no knowing what contamination went out through the culvert. “It’s a significant question mark,” he said.

The applicant responded to wetlands senior analyst Bob Clausi’s comments about phasing plan for construction sequencing, saying mass earth work and rock removal would be completed prior to construction of the building foundation. They also offered to  eliminate overlap of construction activities keep it “simple and defined.”

“The redevelopment of the site will replace existing uses and replace the outdated storm water management system with a new design that will meet requirements of the drainage manual,” Hart said.

Mr. Studer said he took umbrage at the “insinuation and innuendo.”

“Frankly it’s a little bit annoying,” Studer said. “There is no threat to the wetlands or watercourses.”

“Of course there is,” Mr. Skafoulas said.

Mr. Studer said the solution is to “sleeve the pipe.”

“We’re not proposing to surcharge a line that’s already surcharged…. but to provide a liner that would fix the existing overflow. We proposed a solution to repair the line, fix the overflow, and provide the capacity to accept the flow,” Studer insisted.

The applicant’s biologist/soil scientist Michael Klein said that in his experience, conditions that people think are detrimental to wildlife, “in general in wetlands often don’t seem to effect wildlife as much as they effect us,” he said, using the example of Silver Sands Landfill, a former dump turned into a park.

“Ducks and geese were breeding in them. I don’t know if it affected their progeny, but it certainly didn’t affect their choice of breeding habitat,” he said.

AECOM Hired by Town of Greenwich

AECOM’s Mike Doherty testified, suggesting that additional testing be done. “But for the most part their work was done within industry practice,” he said.

“In the long term, it’s probably a benefit to remove that contamination, but there’s probably other factors more significant in effecting the ecology of a wetland,” Doherty said.

Around 11:30pm, Studer and O’Hanlon both sought the microphone at the same time to express their “umbrage” with the other. Mr. O’Hanlon said his experts were on hand but were not prepared to testify because they had only received Mr. Klein’s report as of Friday afternoon, and overall the application remained incomplete.

“You’re supposed to have a complete application presented and then responded to,” O’Hanlon said. “The approach of the applicant has been to trickle this in, and tonight so much information hasn’t been provided.”

Mr. O’Hanlon urged the agency to deny the application. Noting the 12″ pipe that goes from the catch basin in which contaminants were found and flows directly into an upland review of a wetland, the applicant was in “violation status.”

“You haven’t analyzed the wetlands to see what contamination has been done to date,” O’Hanlon said.

“That’s not the focus of this application — it’s the impact of this building on wetlands,” Stephan Skoufalos said.

“What Mr. Studer is telling you, is we’ll do that later. Ask yourself, when is later? If you give them a permit, at what point would this applicant ever come back to you and tell you what they found later? You are being asked to be arbiters of a contamination issue,” O’Hanlon said, adding that the intervenors have no access to the site, and are forced to rely on the applicant’s information.

Mr. O’Hanlon asked the agency if his engineer could join the meetings at town hall between the applicant’s engineers and town engineers. Mr. Harris asked Mr. Studer if that was acceptable. “No,” he replied.

“Ask your lawyer… town counsel will tell you that our analysis is correct, and that you have no obligation to look at this now is incorrect,” O’Hanlon said. “It’s bad law, bad science and bad policy.”

O’Hanlon described the applicant as “clearing the path” and “creating a battle space” in order to transfers ownership of the LLC that owns the property to another entity, and avoid the Transfer Act, which regulates the transfer of polluted properties.

He said the applicant is following a process will allow them avoid review of the contamination and remediation by anybody except the Wetlands Agency. “That’s not fair. That’s not your job.”

“I will be referring your memo to the town counsel,” Ms. Sesto promised.

The next meeting is May 23 and there will be opportunity for public comment. 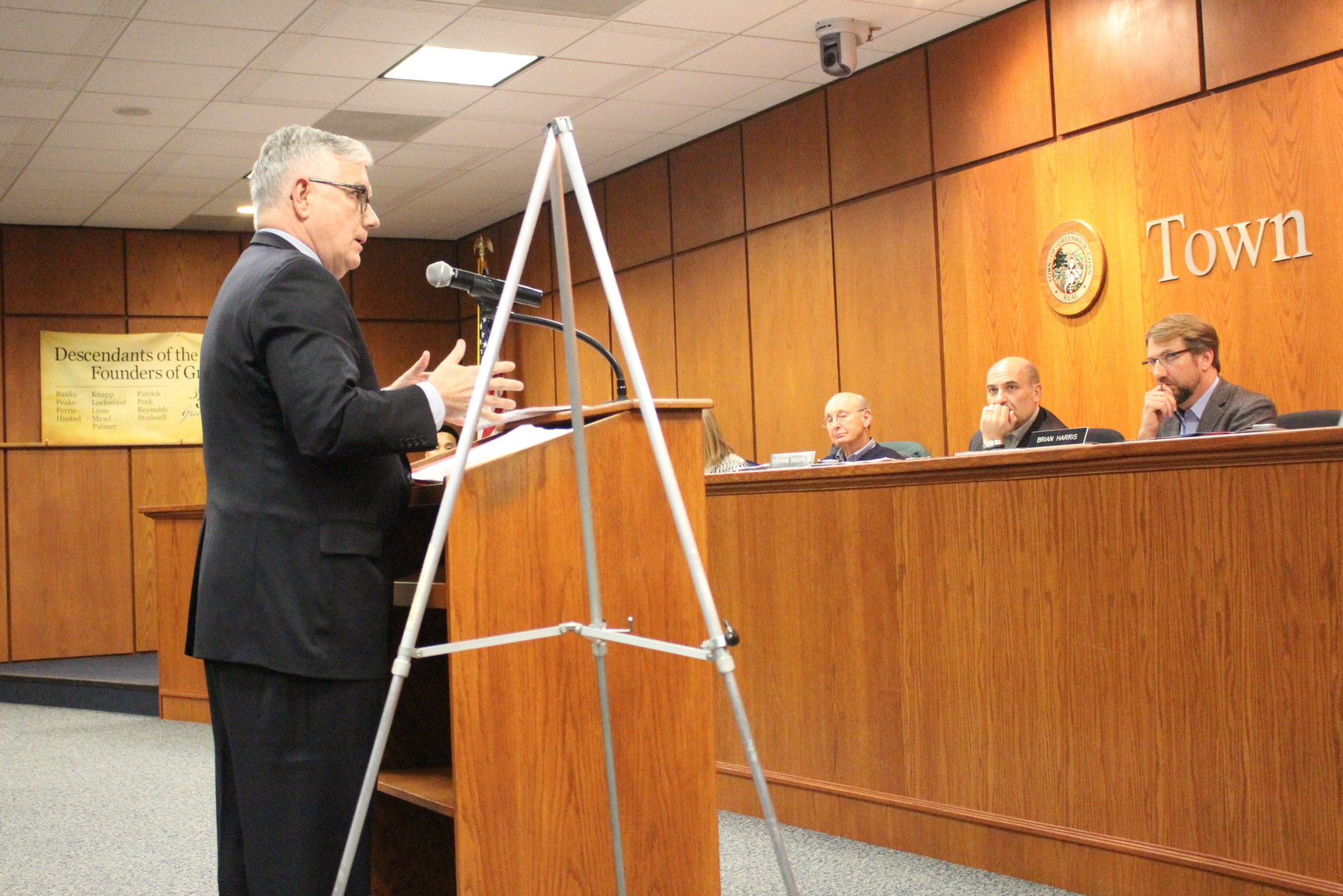 Attorney Ted O’Hanlon testifying before the Wetlands Agency back in March.Credit: Leslie Yager