Mr. Studer’s clients, who seek to develop the site with a 355-unit apartment building, requested that the Wetlands Agency reduce their application fee from $35,000 to $12,000.

Back in 1927, William Gasparrini Sr opened Post Road Iron Works. The property is owned by the next generation the family, who include Gasparrinis and Carrieros.

Though the application itself won’t be presented to the public until a hearing can be scheduled, likely in the Cole Auditorium at Greenwich Library in March, Monday night’s conversation gave a hint at what’s to come, as well as reminders of the “Greenwich Tollgate” controversy of 2013. 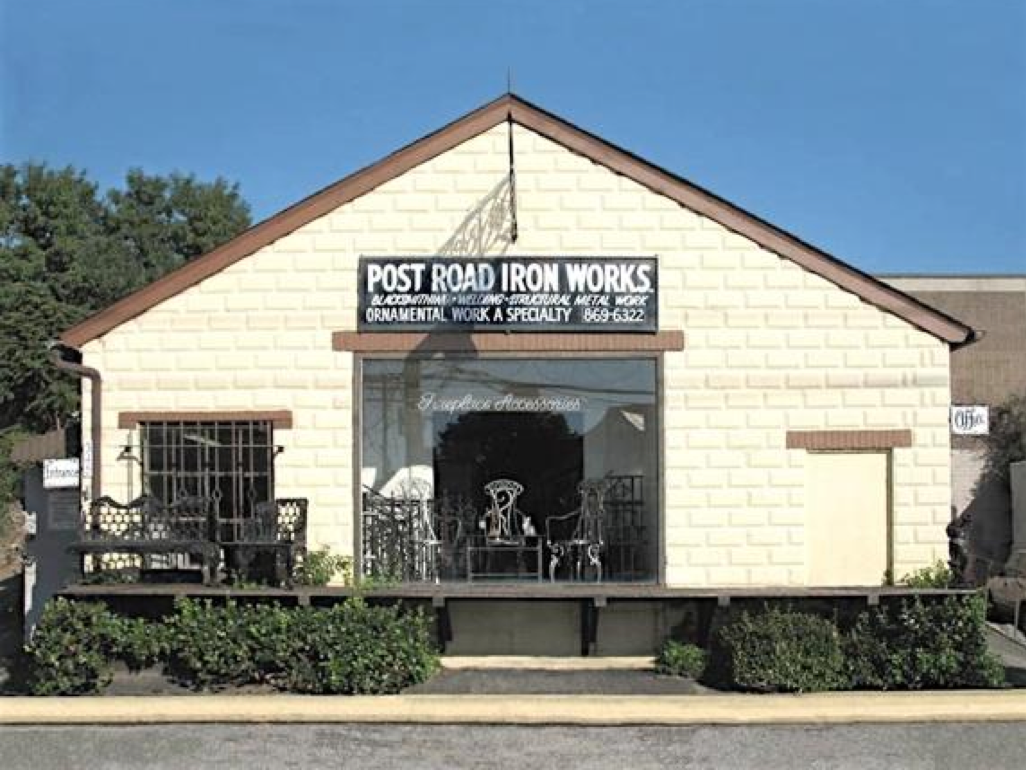 Three years ago, a proposed retirement community was proposed for a 15-acre area. Area homeowners formed a group, hired an attorney and objected to the sheer size of the proposed  660,000-square-foot five-story building, as well as elimination of trees and blasting in the process. Ultimately, the Wetlands Agency unanimously rejected the plan.

On Monday night, Mr. Studer previewed the proposal as he outlined his reasons to seek a fee reduction. He said that this time around, the site being considered is a little over five acres, comprised of a single family house on the westerly portion, and the the Post Road Iron Works site on the easterly portion.

“It is my respectful suggestion to you that this fee is clearly excessive when one looks at the cost of the reviewing process of this application,” he said. “This is not a critique of the fee schedule you just recently adopted, but to point out that Section 19.7 of your regulations does recognize that on occasion, the literal application of your fee schedule to an application could create a hardship. Therefore you have developed a mechanism to address that.”

Limited Wetland Area, Limited Disturbance
Mr. Studer said the site features approximately 87 sq ft of on-site of wetlands – “less than 2/1000 of an acres” – with some offsite wetland areas whose 100 ft radius does encroach upon the proposal.

“We are proposing some limited site work in those areas,” he continued, adding that on site wetlands over by Oak Street, are “essentially lawn – turf grass – areas which are mowed.” Mr. Studer categorized those wetlands as “relatively low functioning,” and said most people don’t even know they are indeed wetlands.

The attorney said that within the Upland Review Area, his client is proposing about 2/3 of an acre of site disturbance to regrade an existing driveway down to Oak St to construct a gated emergency access, and for grading behind the proposed building to construct an internal driveway, build retaining walls and create storm water management facilities.

Mr. Studer said that because the disturbance to the site is limited, the fee reduction is justified.

Mr. Studer challenged the agency’s calculation of the $6,000 per acre fee for the entire amount of disturbance, plus an $8,000 surcharge for disturbing more than 50% of the site. He suggested a more reasonable $12,000 fee would reflect the amount of work to process the application.

The attorney for the applicant said there are no direct impacts on any wetlands, on or off site, for three reasons. First, he said his client’s proposal includes a substantial soil erosion plan which meets state and local requirements. Second, he said the proposal includes low impact development features, including a green roof. Third, he said  there is an extensive storm water management plan.

“It’s an intense use of the site, admittedly,” Mr. Studer said. “But it’s low impact with respect to the areas of which you have jurisdiction – the wetlands.”

Inland Wetlands Director Patricia Sesto said that although Mr. Studer was correct that there is a limited amount of wetlands on the site, the agency has to also look at variables outside that limited area to make sure they are not affecting Town resources.

Brian Harris pointed out that the Greenwich Tollgate application resulted in public hearings that went on for months, with one memorable hearing continuing until well after 2:00am. He said that the application took up many hours of staff review time.

“Without having looked at the application that you are proposing, I am uncomfortable reducing the application fee as defined by our revised regulations, knowing full well how involved the previous attempt to develop this property was,” Mr. Harris said.

Vernal Pools, Possible Contamination, and Neighborhood Opposition
On the topic of the requested fee reduction, other agency members reminded Mr. Studer that there were significant issues with vernal pools when the previous application came up, and that the areas is possibly contaminated.

Mr. Studer said the scope of the Agency’s review would be significantly less as the scope of the focus is on a smaller parcel than the previous proposal. He characterized the new proposal as “benign and low impact upon the wetlands.”

Mrs. Sesto, who was not the agency director at the time of the Greenwich Tollgate proposal, pointed out nevertheless that this type of proposed project results in numerous public inquiries that the agency must field, and that the agency is set up so that the fees cover the costs of running the department.

She said the agency has already been contacted by numerous residents and that each time a person comes in to inquire in person about the proposal, significant time is required to pull out the application and answer questions.

Indeed, the public’s interest was evident inasmuch as a half dozen neighbors waited for almost four hours just to hear Mr. Studer to present his request for the fee reduction.

“This is by definition a high profile project,” Mr. Galvin said, during the conversation about the amount of the fee, which has already been paid by the applicant.

“My inclination is we’re going to earn every dollar of that fee,” Mr. Harris said, adding that he felt uncomfortable reducing a fee for an application he had yet to see.

Around 11:00pm, the Agency decided to keep the request for a fee reduction open, and take it up at an upcoming meeting after having time to sufficiently review the application.