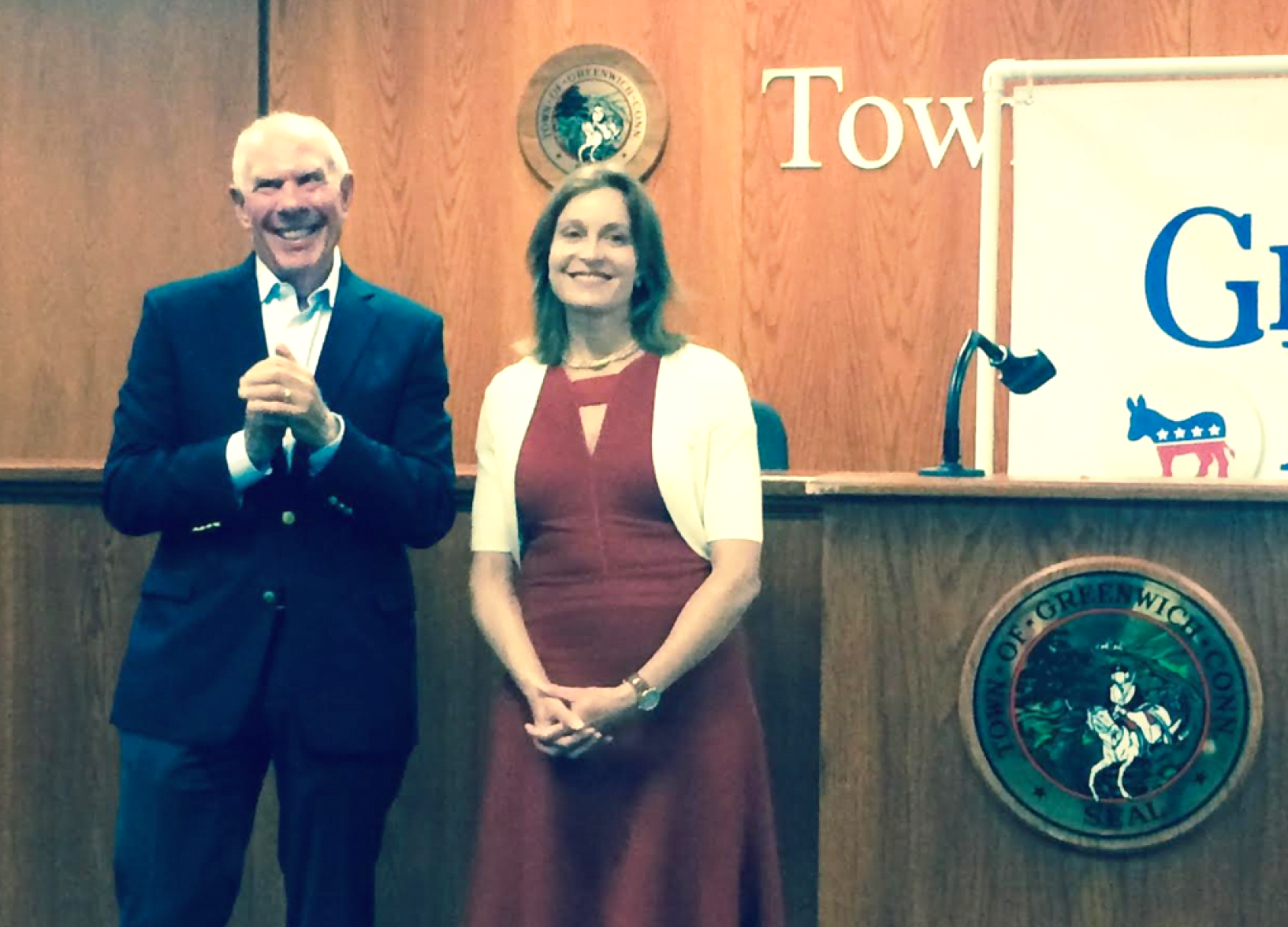 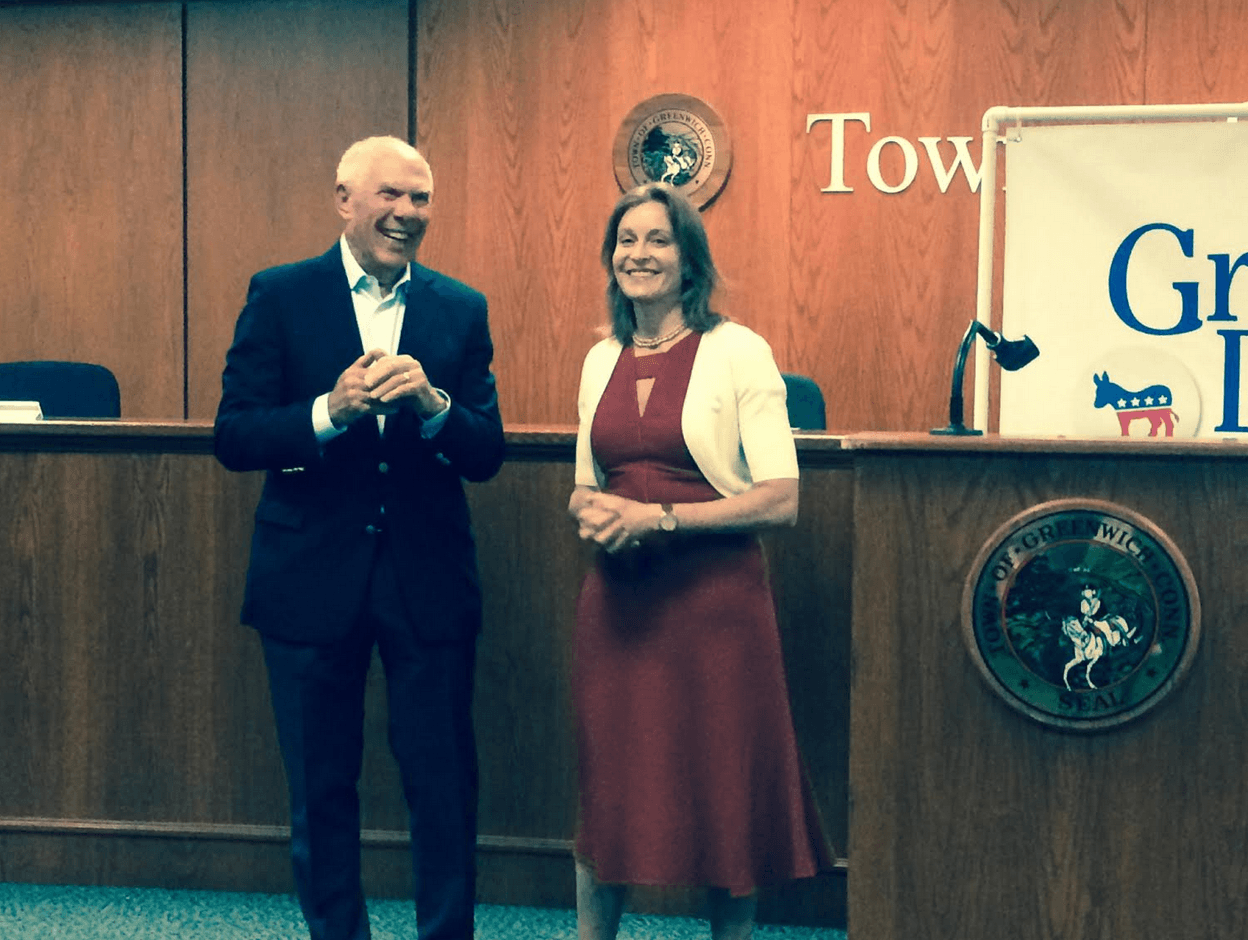 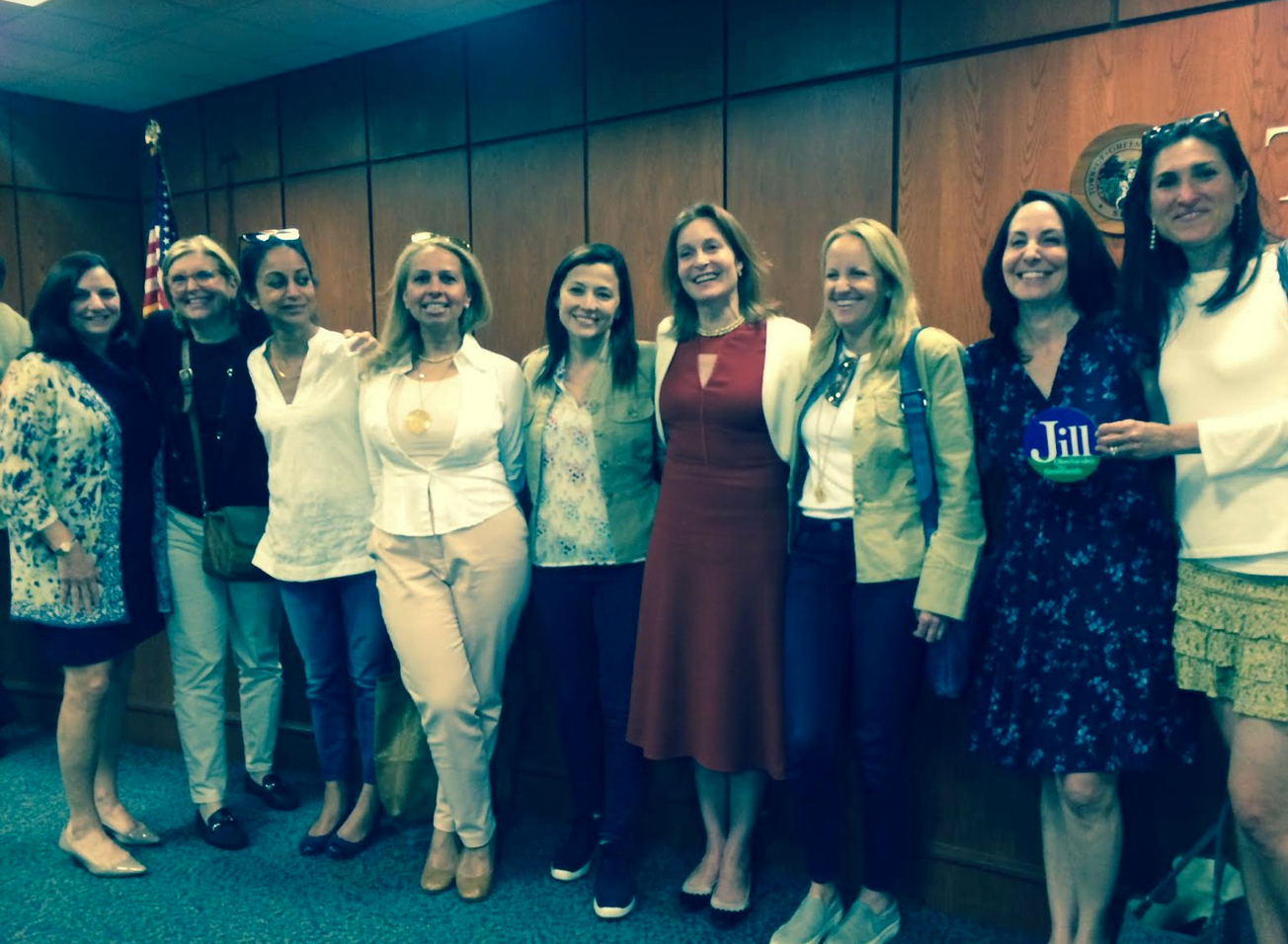 Greenwich Democrats kicked off the campaigns of Jill Oberlander for First Selectman and incumbent Sandy Litvack for a second term as Selectman on Tuesday night at Town Hall before a standing room only crowd.

Gina Gladstein, chair of the Greenwich Democratic Town Committee, described the event as a “coming out” of “the best of the best.”

“They are highly educated and have had impressive careers in business, law and government,” she said of Litvack and Oberlander. “The issues the Town of Greenwich must face have become increasingly complex. We love our traditions and way of life, but in order to preserve all that we love we must look for new and creative ideas to maintain them.”

Here in Greenwich, Oberlander served on the Representative Town Meeting (RTM) for several years, followed by the winning a seat on the Board of Estimate and Taxation (BET) where she has served since 2016, and currently serves as its Chairwoman.

Mr. Litvack attended University of Connecticut and Georgetown Law School. He was appointed by President Jimmy Carter as Assistant Attorney General in the Antitrust Division where he served from 1979-1981. Later he served as vice chair of the Board of Directors at the Walt Disney Company.

Litvack, who introduced Ms. Oberlander, said he understood why some people might wonder why he was running again.

“As most of you know, when I ran for First Selectman back in 2017 and did not win, but won the job of Selectman, I debated long and hard whether to serve,” he recalled. “It came from the conviction that as a Selectman I really couldn’t influence policy, get things done, or start the process that I wanted to. Nonetheless I decided to do it because I thought I owed it to the people who voted for me.”

Litvack said as Selectman he learned about the Town and its operations, as well as about the office of First Selectman, which he joked he had stood outside that office’s door and listened.

He also said that as a Selectman there is no job description.

“As a Selectman you have no budget, no staff, and no one reports to you,” he said.

“And this is not criticism of Peter Tesei or anyone else. It’s the way the job has grown over the years. And if you look at it, every committee is the committee of the First Selectman, and I thought what sense does that make if we have a Board of Selectman? Wouldn’t it be better to act as a team? Aren’t two heads better than one?” he asked, gesturing to Ms. Oberlander.

As far as economic development, Litvack said Greenwich is no further along today than it was two years ago.

Litvack said Oberlander her has proven herself as a leader, describing her as his running mate, team mate and friend.

After a standing ovation, Oberlander said she and her family moved to Greenwich 13 years ago.

“That was an easy decision,” she said. “Greenwich had so much to offer: Excellent schools, a beautiful shoreline; access to open space and recreation, and low taxes.”

“It has become clear to me from my government service that the issues facing Greenwich have grown more complex. As much as we like to think of ourselves as a typical New England town, we more closely resemble a small city with a multi-faceted population and wide-ranging needs,” she said.

Oberlander said her campaign will focus on the “three Es.”

Oberlander pledged to eliminate the stumbling blocks to starting a new business.

“I will spend time cultivating relationships with existing Town businesses to ensure we are meeting their needs. I will work to re-invigorate Greenwich Avenue and develop proposals to enhance other community centers with place-making designations such as arts and culture or design zones. Economic growth will increase our tax base, support our low mill rate, and preserve our enviable bond rating. These actions will preserve and grow our home values and attract new residents.”

On education, Oberlander said infrastructure needs to be brought up to 21st century standards. And, she said, “We need to eliminate the achievement gap. We need to improve management, operations, and administrative record-keeping to reduce unexpected costs and damages.”

Lastly, she said by focusing on Greenwich’s environment, the Town can move toward sustainability, saving taxpayers money and protecting parks and natural resources.

“By adopting policies that reinforce energy efficiency and resiliency, improving access to green spaces, recreational resources and coastline, we can truly revitalize Greenwich for generations to come,” she said. “Greenwich needs a leader who has the expertise and experience to address these issues and who will move beyond the status quo.”

She pledged to operate transparently, and work collaboratively and proactively with an eye towards the future.

“We need a leader who puts policy before politics, who will reach across the aisle and across Town to find solutions and bring our community results,” she said. “I have the experience and knowledge to preserve what Greenwich does well and to challenge the status quo when necessary.”

Granit Balidemaj to Kick Off Campaign for Selectman