Dan Quigley recently announced he is seeking the Republican Town Committee’s endorsement as candidate for Selectman.

Quigley, whose family lived in France and moved back to Greenwich when he was 5, attended North Street School and Central Middle School, and graduated from Greenwich High School in 1990.

“All those kids from North Street School are still my friends to this day,” he said on Thursday over a coffee at Coffee Luca inside Something Natural Greenwich.

Quigley went on to graduate from Syracuse in 1994 and, after graduating worked for Merrill Lynch through 2009. After that he escaped the commute to New York City and for a few years worked at Chatsworth Securities in Greenwich before becoming what he describes as “Max Quigley’s personal assistant.” 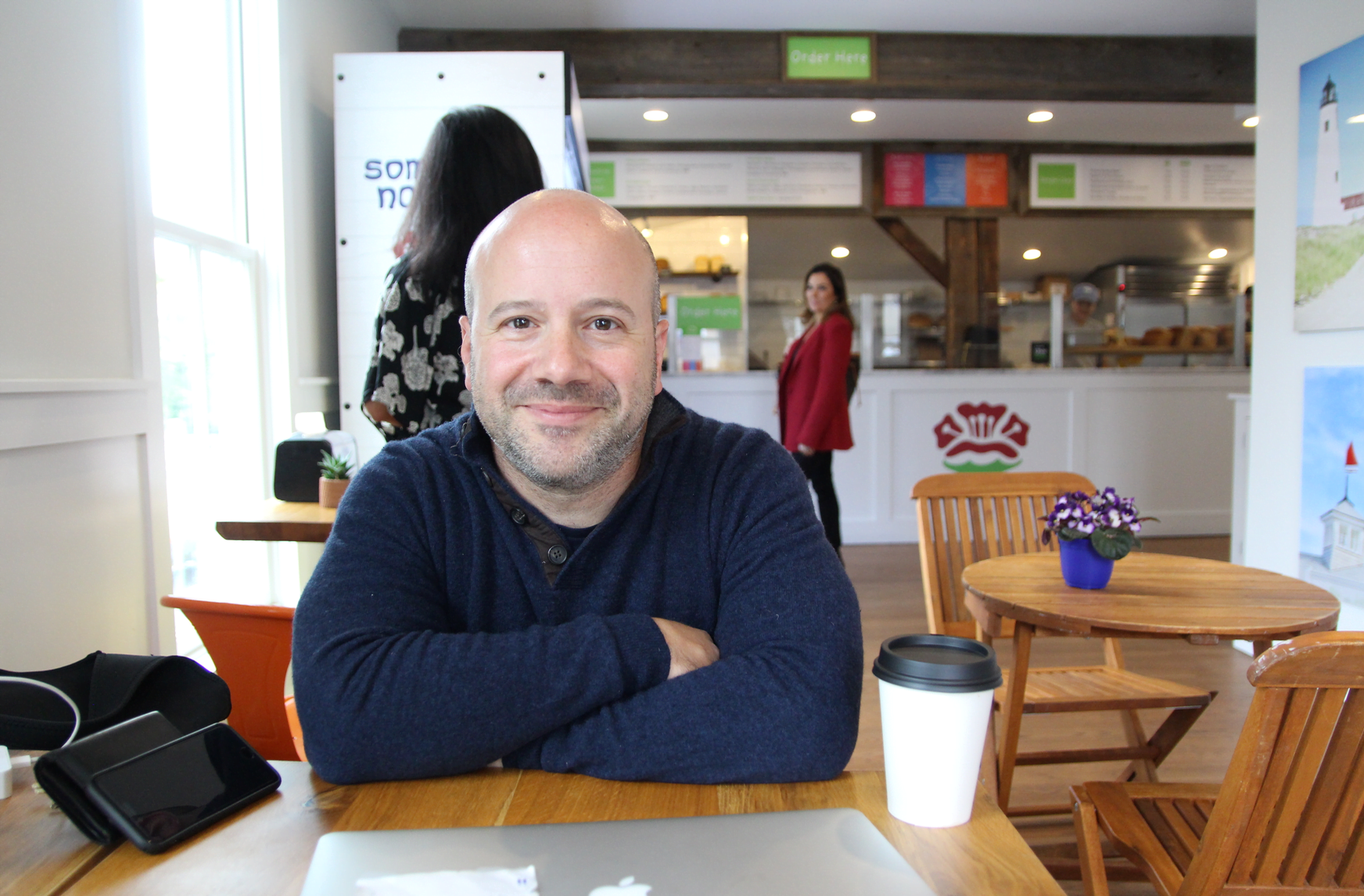 After all those years living in mid country, Quigley and his wife made their home in downtown.

Today, as president of Homeowners Association at 25 West Elm, a downtown condo building that was built in 1938, he serves with two women on the three person board.

“Having grown up in mid country, and the last 17 years living downtown, I’ve seen the face of Greenwich change from both perspectives,” he said.

Quigley, who in 2005 married his French wife, Antoinette, at St. Mary’s Church on the Avenue, said they are excited for their 5-year-old son Max to start kindergarten in the fall at Julian Curtiss, a Title 1 magnet school offering world language instruction in grades K-5 in either Spanish or French.

“We’re excited he can take French there,” Quigley said. “And they have the Parade of Nations. He’ll love that.”

He said Antoinette was educated in France and came to the US after college. “She made her way with no connections,” he said. “She has a very different perspective.”

In fact, Quigley said the timing for his run for selectman is ideal as his wife is the “bread maker,” working in finance, while for the past three years he has primarily looked after Max as an “at home” parent.

Quigley, who has served in District 1 on the RTM for 2-1/2 years said the Town has historically been well run and he believes most residents have trust in and believe Greenwich is well managed.

But, in his mission statement, he says up front, “I fear that we are facing a series of challenges that could cause lasting damage to our community. Some of these challenges are courtesy of Hartford, some are rooted at the local level and some are part of broader national economic and demographic issues.”

Describing the challenges as “issues at the fringe,” Quigley said,  “We could do better in communicating to residents and getting them involved. People still ask ‘What is the RTM?'”

“I think RTM was sleepy and is less sleepy now. You can thank the upheaval of the past couple years for that,” he said, referring to the shakeup in 2017 that resulted in a more equal balance in the ratio of men to women.

“Sometimes things happen for a reason. Though I don’t always agree with some of the things Indivisible Greenwich has pushed, sometimes sleepy organizations have to be shaken, so it’s not a bad thing,” he said.

Quigley gave three examples of issues the Town is facing.

Starting with the need to revitalize Greenwich Avenue, Quigley said the vacant retail stores on Greenwich Avenue need to be addressed. He said he’d like retail owners to get together with Town officials to come up with ideas.

“We need to try to figure out what we can do to help them rent their places out,” he said. “Obviously there is a disconnect on rents. There are more retail openings in Greenwich Ave now than the day Lehman Brothers collapsed in 2008.”

Living downtown, Quigley said he counts the vacancies every month. “You have some big ones – the Ralph Lauren space is vacant,” he said, adding that that space is quite large and might be ideal for an Apple store, but that company already has a space on the Ave. “It might be hard to find the right tenant for that space.”

Another challenge to the Town, Quigley said, is the impact to Greenwich Hospital of the closing of Port Chester’s United Hospital Medical Center.

“My dad passed away 10 years ago, but he was in and out of the Greenwich Hospital for things like falls. The ER is always packed with people not there for emergencies.”

“The Town should talk to Port Chester leaders and see if there is there’s anything we can do to help them facilitate the reopening of the hospital or work in a public-private way to open a medical facility,” Quigley said. “Maybe Greenwich could grease the wheel a little bit. It’s the (hospital) staff who have this on their radar, not me as a customer. They have to treat everyone.”

Another suggestion of Quigley’s is to explore the idea of working with the Greenwich Land Trust to procure some property for a town farm.

“It would be a place to grow vegetables and dairy products,” he said. “We could get the kids to work there in the spring and summer. Maybe have some paid internships, and offer community service.”

Quigley said Greenwich Schools could procure all the greens and dairy from a town-owned, local, organic dairy farm.

“They do this a lot in France,” he said. “I’m all for being budget conscious, but this worth exploring.”

Quigley, who is brimming with ideas, said he loves challenges and loves his Town.

“I love doing things that lead to progress for a community. That makes me feel good,” he said using his position as president of the Homeowners Association at 25 West Elm as an example.

“As selectmen you have the ear of people. The job is what you make it,” he said. “And if you have ideas to push forward you can. That’s what I want. If you get new people in there who see it as something more meaty, it would be for the betterment of the Town.”

As for his prognosis on the challenge of back country real estate versus the increasingly popular “front country” (to borrow a term coined by Mark Pruner), Quigley said, “I think the market will self correct. Housing prices are going down, but Greenwich will always be a destination.”

The candidate said people will always want to come to the suburbs when they tire of living in New York or other cities such as New haven.

“Greenwich is on the radar, and it is a place that offers more than other Gold Coast towns,” he said. “But we have to be careful with what we do with the mill rate and taxes because once we become comparable to Town like Rye or other towns in Westchester, we’ll lose what’s made us so attractive all those years: a low tax rate, great public schools and a great independent school system as well.”

Overall, Quigley is rosey on Greenwich.

“Any time I think Greenwich is having issues, just go to an RTM meeting. There are 230 people volunteering there. That speaks volumes to the Town. The BOE, BET, RTM – these are all volunteers giving up their free time.”

Asked to comment on the divisive political climate in the nation and Greenwich, Quigley said, “We all shop at the same stores. We eat at the same restaurants. We go to the same parks. I don’t think it’s feasible for Town officials to be too extreme in their beliefs. Locally our differences are more peripheral.”

Granit Balidemaj to Kick Off Campaign for Selectman