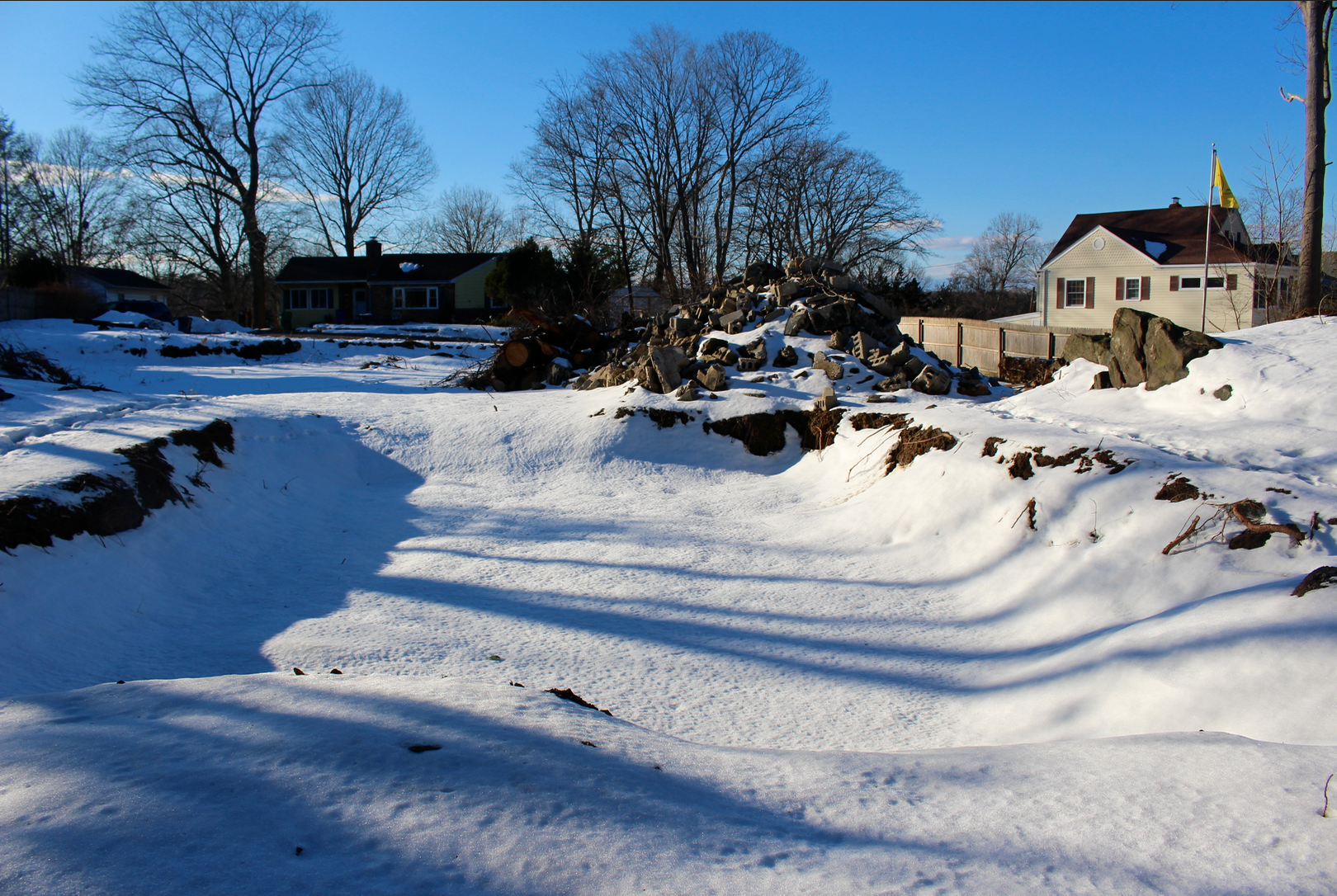 Specifically, the property is .551 acres in R-d zone. The and five units would total 12,649 sq ft, along with driveway and parking areas. 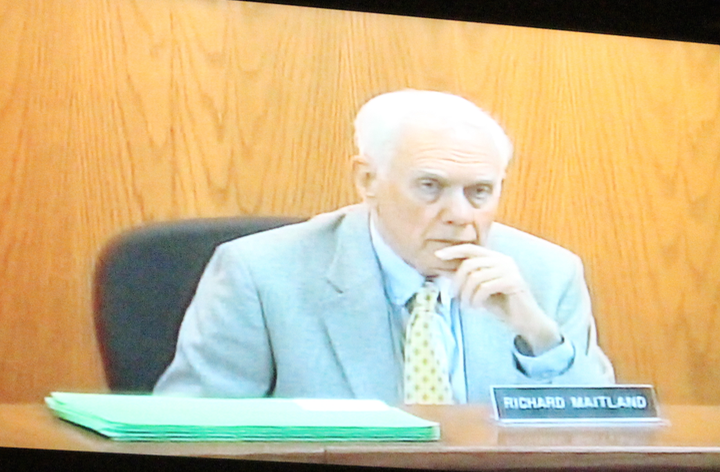 The developers were not present, but attorney Casey O’Donnell, along with architect Tim Peck and engineer Tony D’Andrea, were there to defend the project to skeptical commissioners and the concerned neighbors.

O’Donnell said the cluster of homes would “reduce bulk and clutter in the neighborhood,” and that each of the five proposed units would have 4,809 sq ft of lot area. He referred to a stated goal of the Plan of Conservation and Development of  creating a wide selection of housing, and the problem of illegal multi-family homes. He said the proposal represents a unique chance to meet the goals of the POCD.

“There are a lot of two family houses,” acknowledged Commissioner Margarita Alban. “What you propose would be perceived to be very different.” She challenged Mr. O’Donnell’s comparison to a development on Moshier St with two buildings of 2 units each, pointing out that that is in a different neighborhood.

“We’re not so much asking you about the density issue, but character – where there’s two-family, they aren’t turned sideways to the street,” Alban said, asking, “What happens to the feeling of a neighborhood, and community character, when you turn away from the street?” 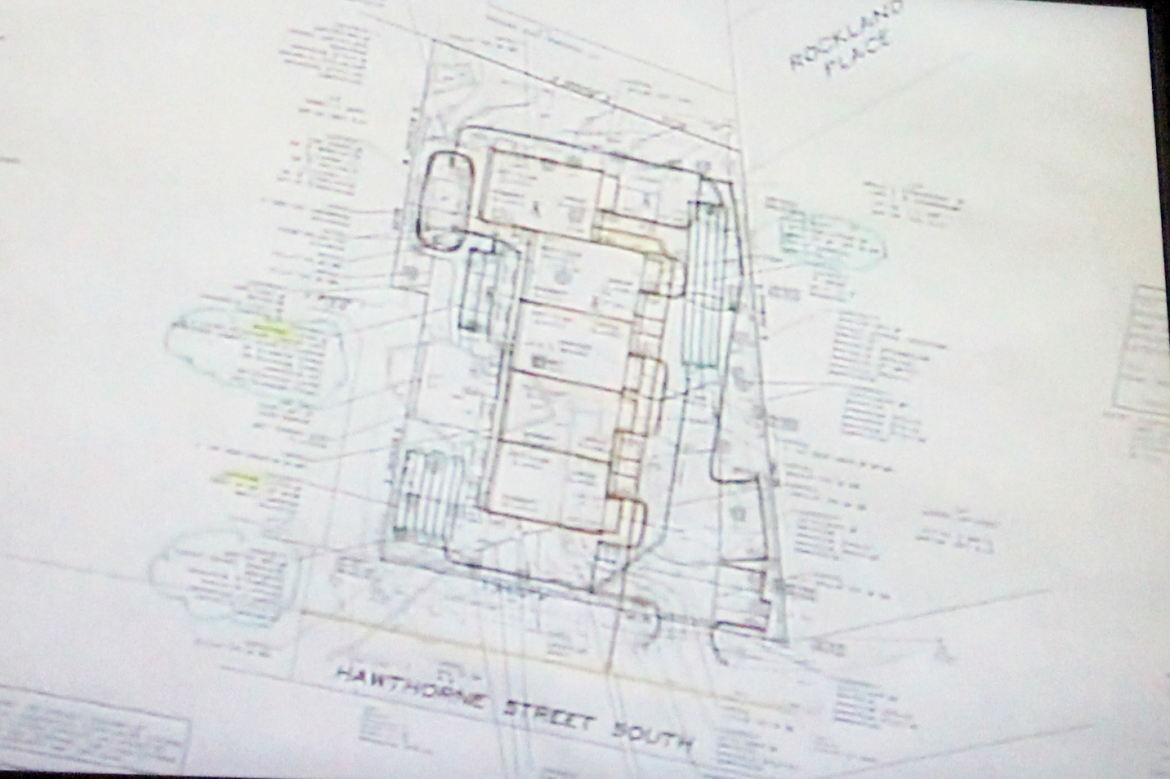 Rendering of proposed row of 5 townhouses at 16 Hawthorne Street South.

“We’re questioning having a single, long building with its side to the street,”Alban said.

When Mr. O’Donnell said he and his law clerk had driven around the neighborhood earlier in the day to see if properties were using front yard parking, and whether properties were oriented sideways, Mr. Maitland interrupted to point out that those may have predated regulations.

Mr. O’Donnell said he’d seen a lot of properties with parking in the front yard and started to segue to “character,” when Mr. Levy interrupted to clarify, “Character that we like,” to a round of laughter. 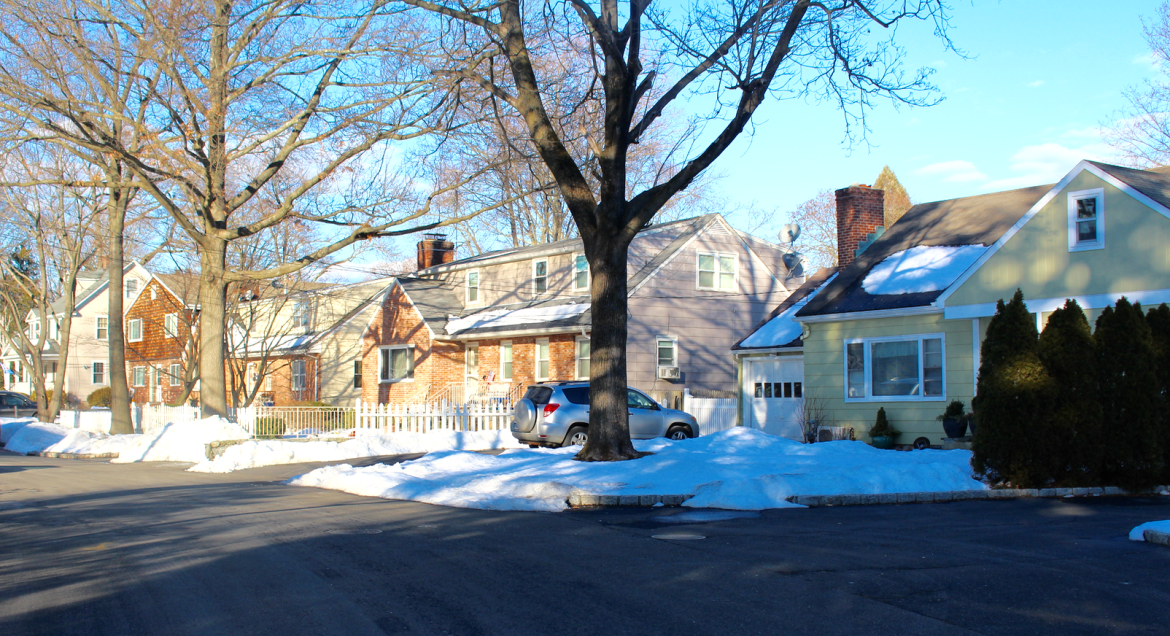 Homes along the opposite side of Hawthorne Street South

When Mr. Fox said he couldn’t recall P&Z having given permission for parking in a front yard, Mr. O’Donnell said pointed out the regulations permit it if when  adequately screened and landscaped.

O’Donnell said that in the past, many masons lived in this neighborhood and liked to show off their craft. He said one of the project’s developers is indeed a mason and wanted to follow that tradition.

O’Donnell said the proposal is to build a masonry wall, 3 to 4 ft tall, that would follow the topography, and that the wall would screen parked cars, but not rise so high as to preclude interactions between neighbors.

He said that by parking cars in the front yard, the amount of impervious surface on the site is decreased.

Mrs. Alban pointed out that the existing conditions report does not match current conditions. “What we’re looking at, the dwelling is still there. The trees are still there,” Alban said, adding that had not the trees been removed, the commission might have come up with compromises to save some of them. 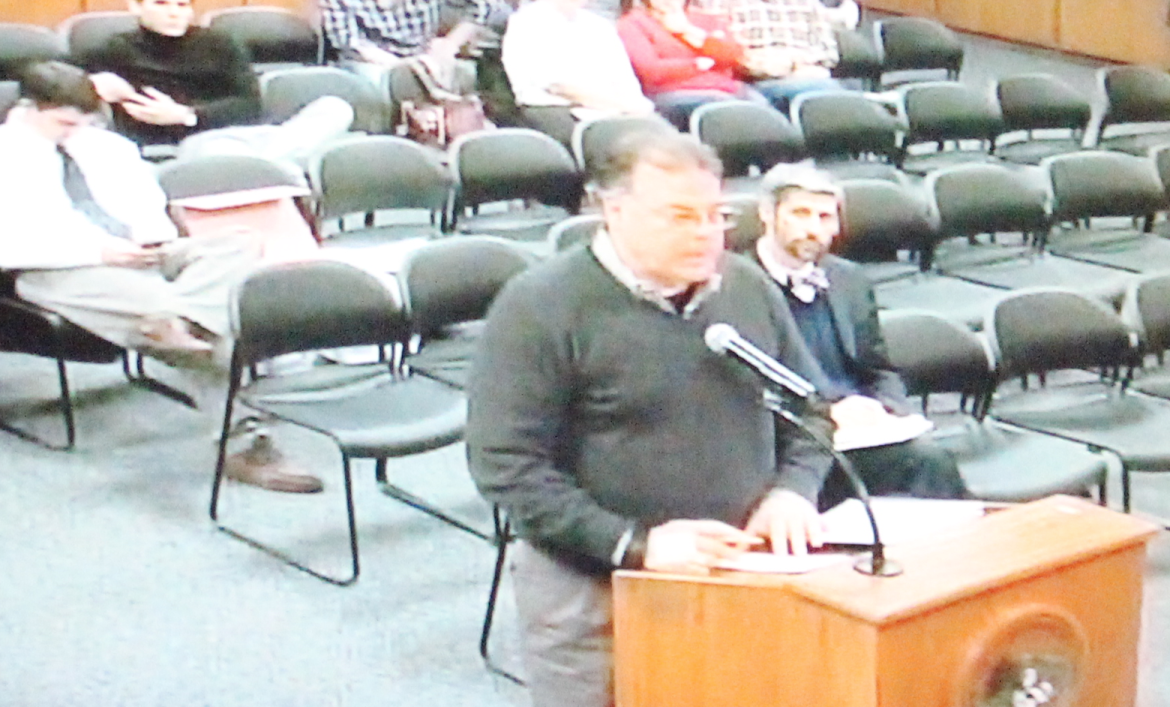 “We appreciate the desire to preserve mature plantings. The neighbors were requesting and grateful for any cleaning up of the site,” O’Donnell said. “Perhaps in retrospect it would have been better to leave those plantings existing until we have these conversations with you.”

Circling back to streetscape and community character, architect Tim Peck said, the screetscape issue would be addressed with landscaping in front. “The impact on the neighborhood – you see many of the gable ends…  Granted we don’t have a main door facing the streetscape.”

Mrs. Alban asked about the rock outcropping, which continues to the neighbor’s property and forms part of her basement wall. “When you go to break it, the vibration could impact the neighbor,” Mrs. Alban said. 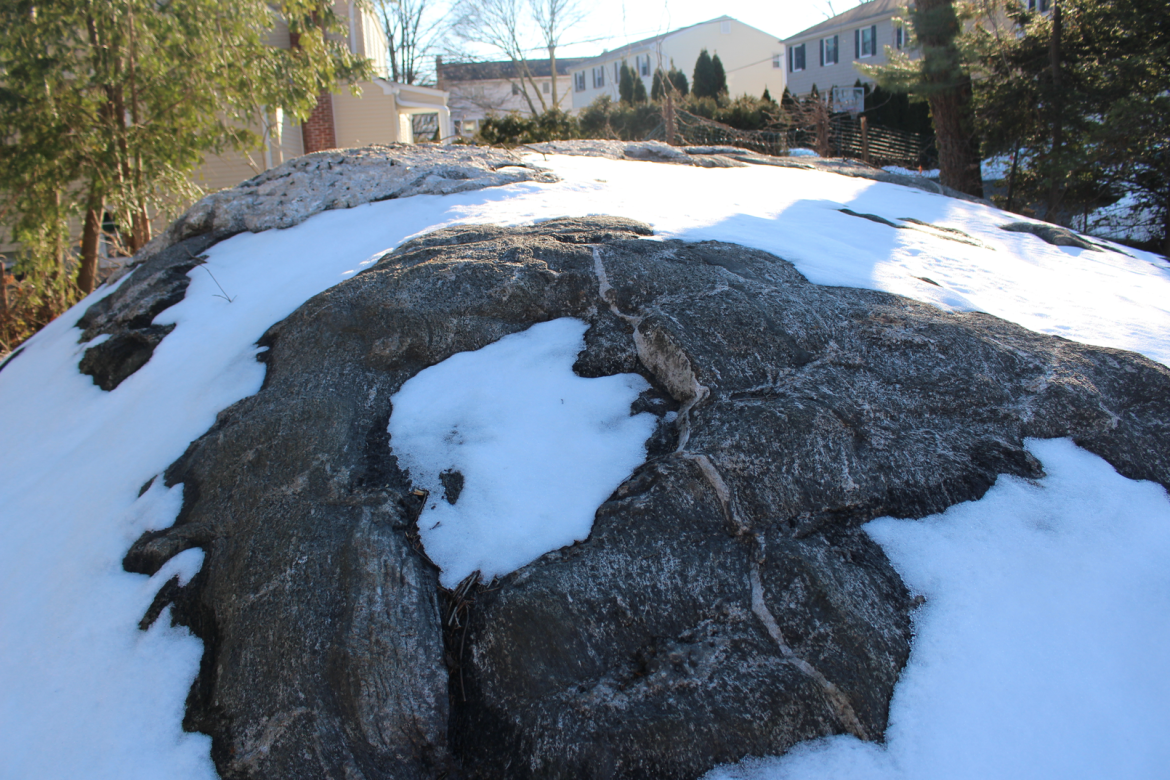 Mrs. DeLuca said there was concern about the hydrology of the neighborhood. “What is the nature of that rock? Have you considered that in this design?” asked Mrs. DeLuca

“I don’t have an answer to that,” engineer Tony D’Andrea said. “I don’t know that it shouldn’t be applied to every site that you develop. ..The removal of rock is a science today. Those who champion hammering the rock I think are making a mistake. I would drill and blast.”

Mr. D’Andrea said that regulations, including setbacks for yards meant this development’s 5 units must be configured in one long line, rather than jogged.

“Could the size of the buildings be reduced?” Mrs. DeLuca asked.

“Why five units? Why not two and two? Are you just trying to squeeze in as much as possible?” Mr. Macri asked, pointing out there are many duplexes in the area, which could be achieved if the center unit were removed, and that would allow them to eliminate the parking spaces from the front yard and bring in air. 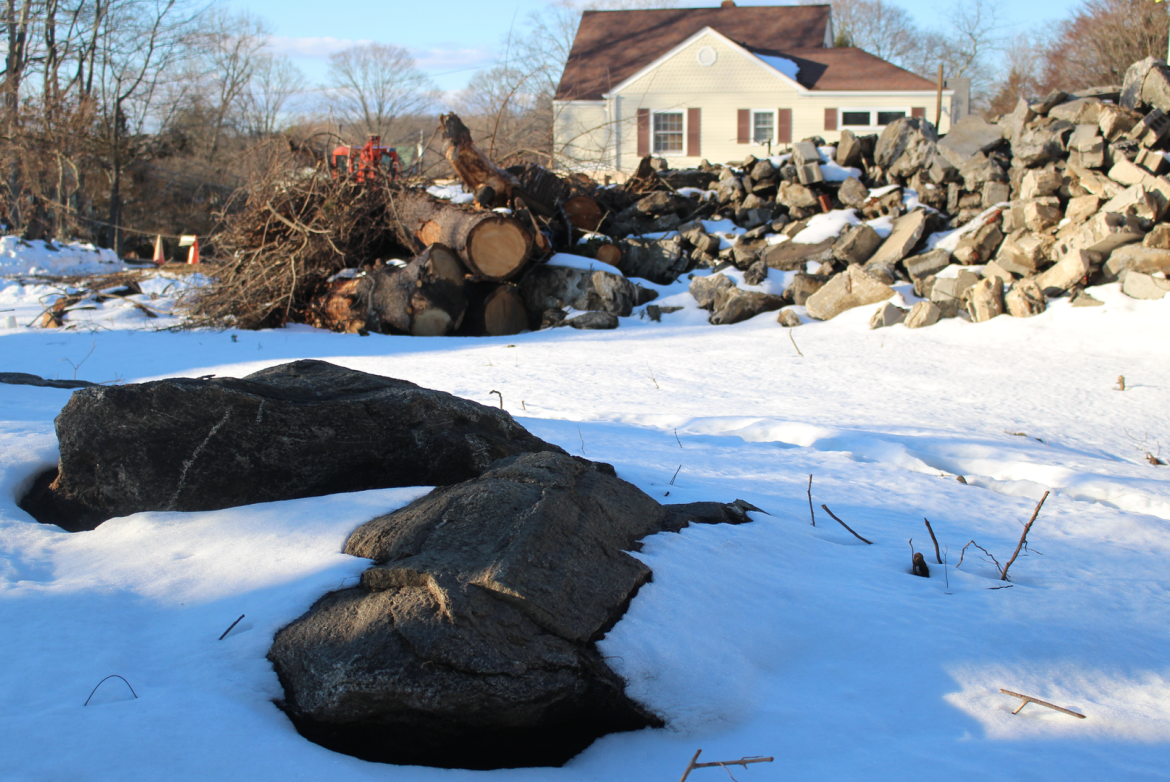 “For clarity, we think this is a single family and two-family neighborhood,” Mrs. Ramer said. “This is one of the few neighborhoods in town that has not been adulterated. this commission is trying to focus on the preservation of neighborhoods… It’s a lovely old neighborhood.” She asked that they return with something with units that face the street, and, if possible split the building into two.

“I appreciate that perspective, but do not share it,” Mr. O’Donnell said. “This property is unique.”

Ms. Alban said that during the POCD process, there was much negative feedback from the community against “double sideways” development, which she said prevents predictability in a neighborhood.

Neighbors Have Their Say

Judson Van Ingen, from 20 Hawthorne Street South said he was concerned about removal of old growth trees, parking and traffic flow. He pointed out that Hawthorne street is very narrow, has no sidewalks and that children walk up and down the street to the school bus. “There are no sidewalks in the neighborhood at all,” he said. (See also: Neighbors Bristle Over Speeding Traffic on Almira Drive) 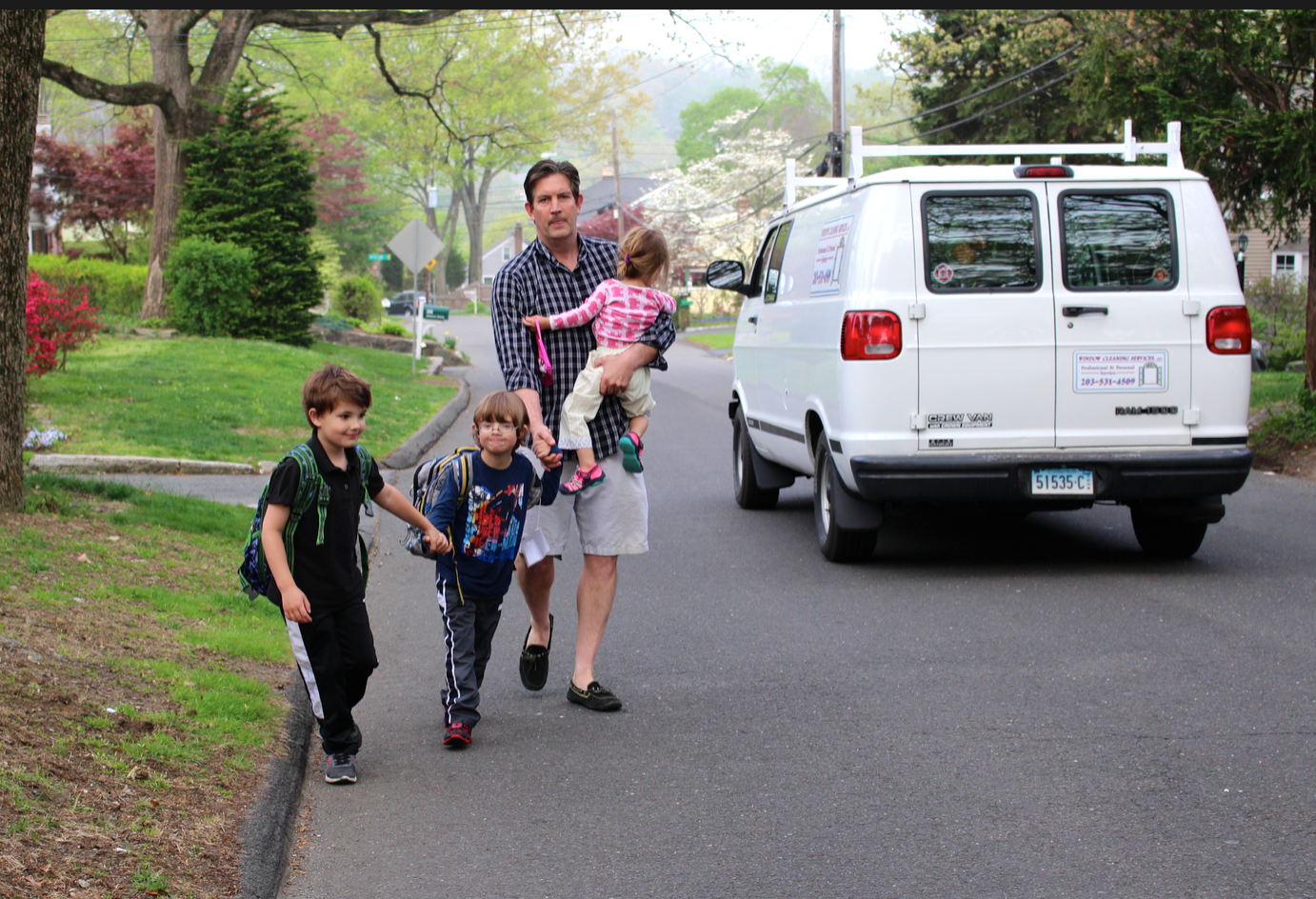 “I don’t think Hawthorne Street is ready for a row house yet,” said Mr. Van Ingen, adding that the character of the neighborhood couldn’t be summed up in a “half hour lunch drive by.”

“I am also an owner of a pet rock in my basement,” said Carol Larusso, of 14 Hawthorne Street.

“I am very concerned although Mr. D’Andrea, who I respect, thinks that would not be an issue. I am not going to take his word for  it,” Larusso said. “I already have, from what they have done,  some damage in my living room.”

Larusso said the wall would not be conducive to her traditional neighborhood.

“The patios would abut my driveway. Five patios of people all behind a wall would be a lot of people congregating in one area right next to our condo,” she said, adding that having a wall along her driveway would prevent neighbors from communicating. “The 5 units, the way they look there don’t feel right.” 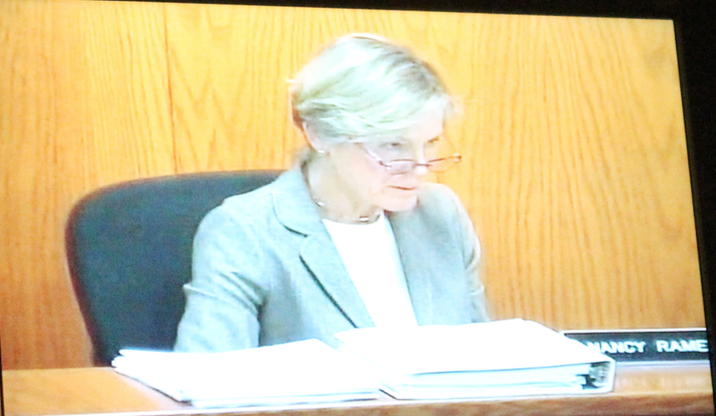 Lynn Cunningham, a neighbor on Rockland Place, said, “It’s the rock and the blasting that really bother me. I only have half a basement – it’s all solid rock…I’m too old to deal with damage done to the house. That really bothers me that they’re going to blast it. We’ve been there 50 years, so just the thought of them blasting that rock and vibrating the house – the house is old. So am I. I don’t want to have to start repairing damage – It would be the cost and the fighting. The blasting that’s really upsetting my husband and I.”

Bea Carriero, who lives directly across the street at 17 Hawthorne South, said, “My concerns are basically that it’s too congested…It brings up concerns with snow removal and concerns with water. She said her mother’s house on Hawthorne Street was built 63 years ago. “I heard stories they literally sunk a steam shovel because the properties are either rock or water. I’m really concerned about the water situation. Most of us have basements that flood. We have sump pumps. People are pumping water out for days after a big storm.”

At the end of the discussion, the Planning and Zoning commission decided to keep the application open, and have the applicant return. Mr. LaRow told Mr. O’Donnell that the plans would need to be submitted by Feb 9 in order to get on the agenda for Feb 23.