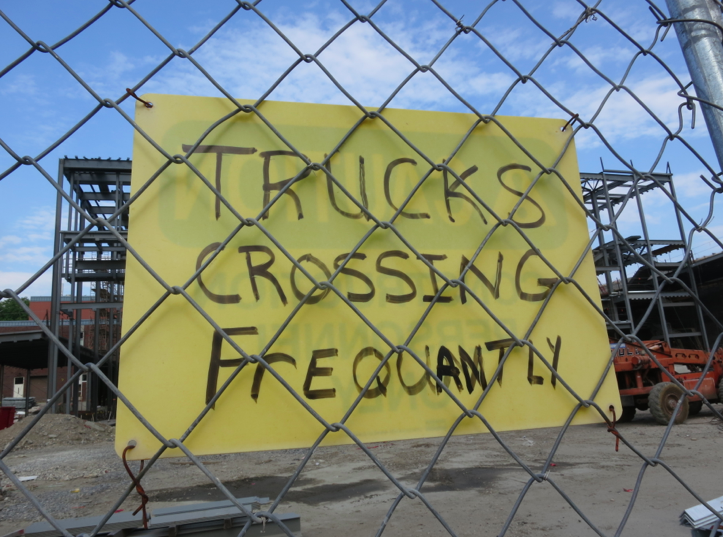 It was a timeless scene.  A father taught his teenager to drive in the empty parking lot. Middle schoolers pedaled 10-speeds up the sidewalk. Joggers and power walkers circled the track while a glutton for punishment did pushups on the stadium bleachers. Though there wasn’t a dump truck or worker in sight, the warm July weather on Saturday drew residents to the GHS campus. 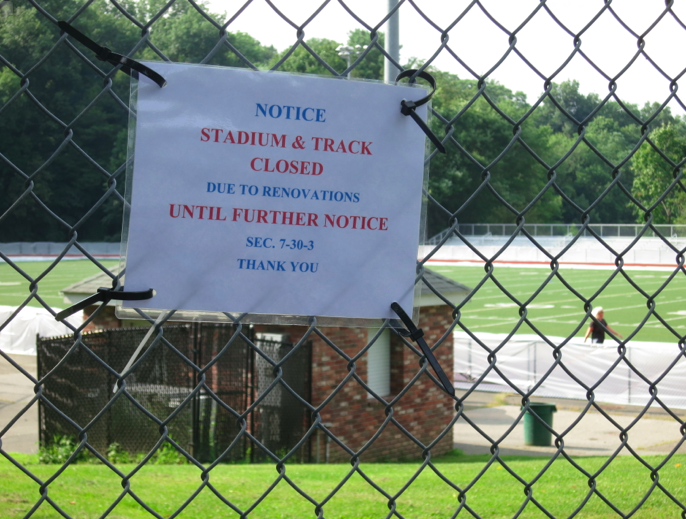 Trucks Crossing “Frequantly”
Small signs printed in red and blue ink warned that areas of campus are off limits due to “construction” and “renovation,” euphemisms for remediation of contaminated soil, yet the campus were hardly deserted.

A walk around campus from Cardinal stadium to the west parking lot revealed visible changes. 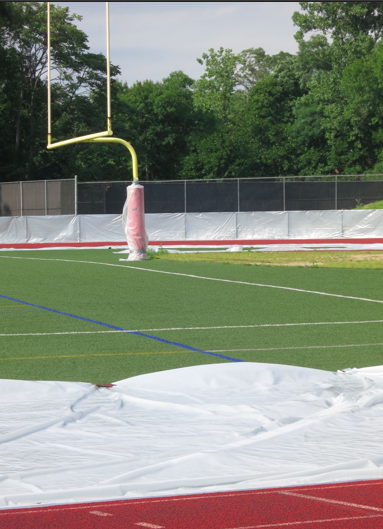 Cardinal Stadium Shrouded in Plastic
Much of Cardinal stadium was wrapped in plastic, including the goalposts.

As both remediation and MISA construction paused for the weekend, enough of the steel framework was in place that one could envision students  congregated in a new, state-of-the-art auditorium.

Auditorium Takes Shape
That the massive auditorium has taken shape at all belies the drawn out and unfortunate back story of the MISA (Music, Instructional Space and Auditorium) project. Greenwich High School, which sits on 55 acres along Hillside Rd, was built in 1969, prior to PCB’s being banned under the Toxic Substances Control Act of 1976. 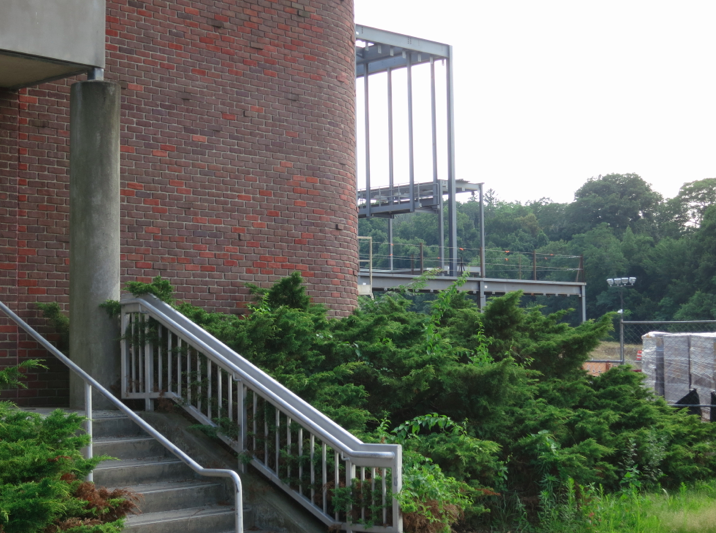 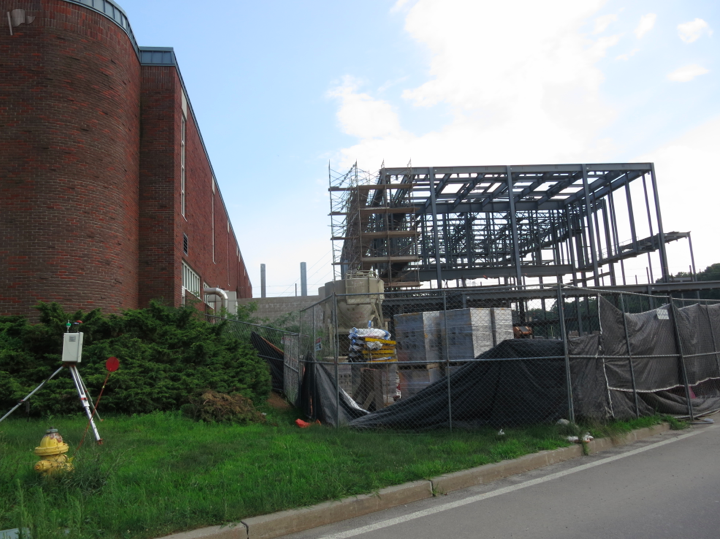 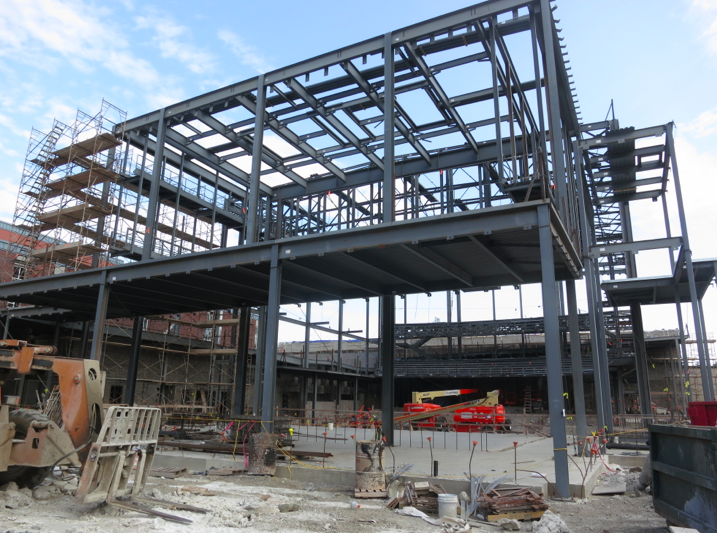 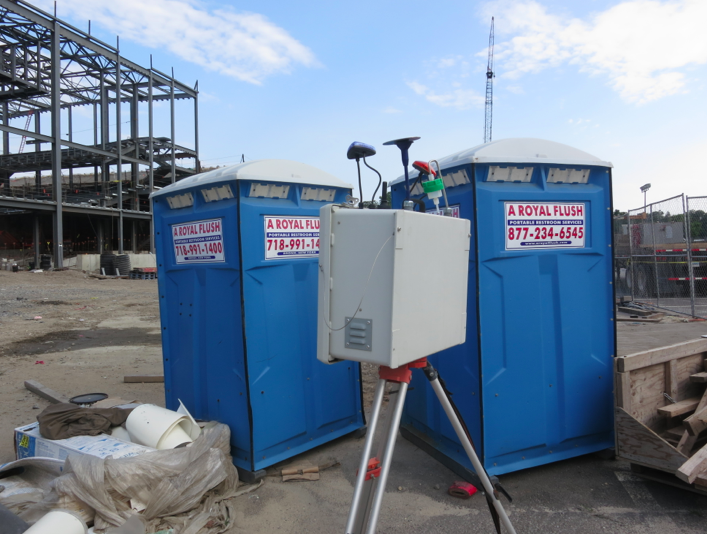 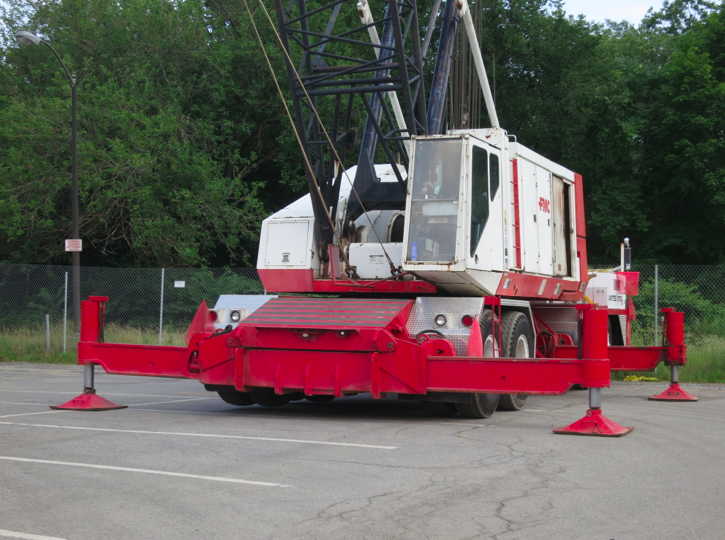 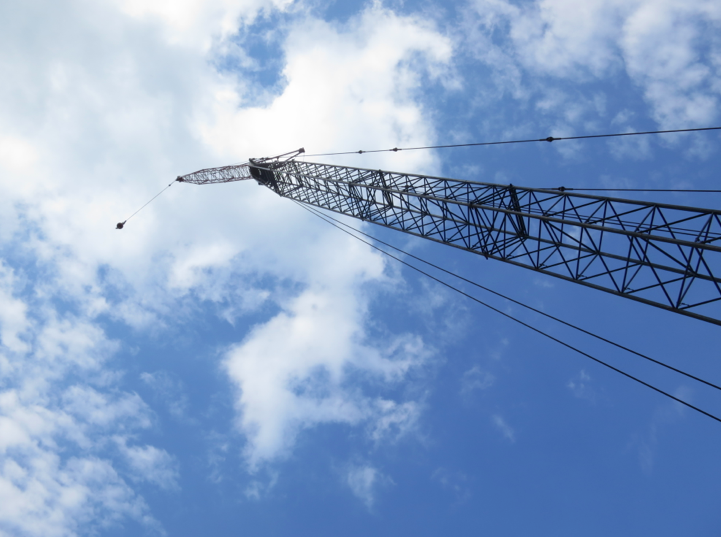 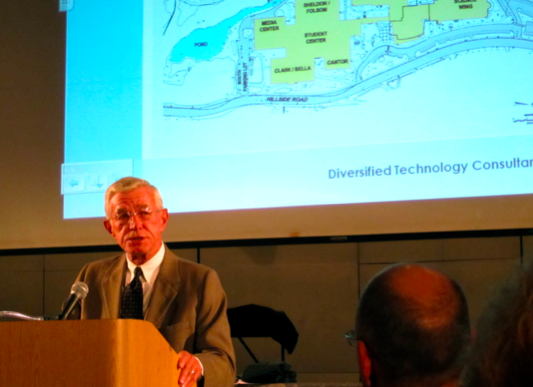 The then interim Greenwich Schools Superintendent, Roger Lulow, speaking at a parent information night the first day of school in 2011 where members from EPA, AECOM and the building committee put parents at ease about the discovery of toxins in the soil at the GHS Campus over the summer. Credit: Leslie Yager

In 2011, when preliminary work began, a backhoe operator noticed suspicious looking soil when he started digging.

The project was halted when the soil was discovered to be contaminated. As more testing was done, maps of hot spots on campus were issued, fields were closed and young people learned a new vocabulary word: remediation.

On the first day of school in 2011, the GHS PTA organized  a public information forum on the environmental impact of the MISA construction.

And, while back in 1969 the “new” high school cost $15 million, today the cost of the RAP (Remedial Action Plan) is set to eclipse the school’s original cost. 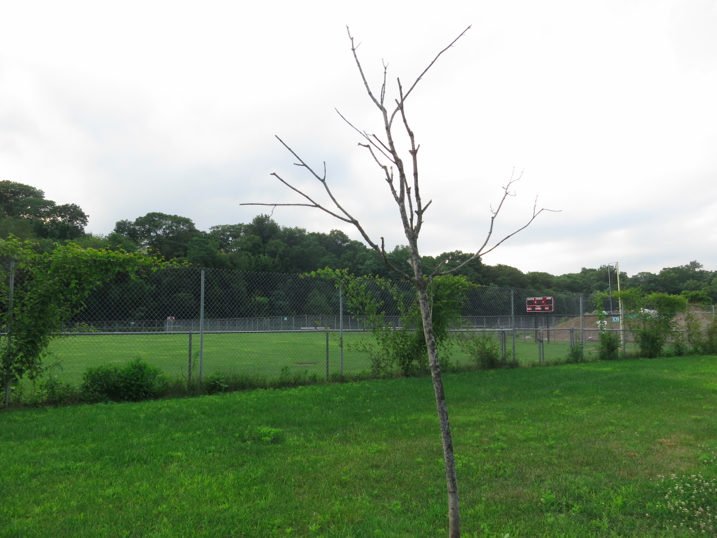 Going back further in time, the heart of what would become the GHS campus was called “Ten-Acre Swamp” where residents ice skated in the winter. Others have a more recent memory of the site’s use as an unofficial dump.

When it opened on Oct. 25, 1970, no one was surprised when the playing fields became submerged after heavy rain. For years students joked about needing flippers for PE.

Finally, though, the project has taken on momentum and the new auditorium is taking shape.  An enormous crane has towered over campus for months. The 180 ft crane loomed large over 200 young triathletes at the 8th annual Kids Triathlon on June 8 and punctuated the sunset on June 23rd as 646 graduates of the class of ’14 flung their mortar boards toward the sky. 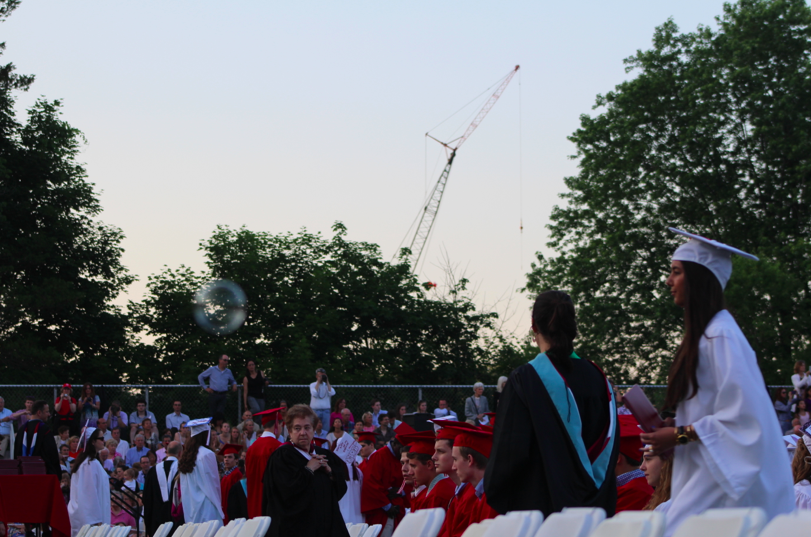 In about a year’s time, after the new auditorium is finished and able to accommodate half of the 2,700-strong student body, work will move to the demolishing the existing auditorium and focusing on the classroom space aspect of MISA. The goal is to ensure adequately sized band, choral, orchestra and electronic music classrooms: 11,800 sq ft of new classroom space and 9,700 sq ft of renovated space. The classroom construction should take another year, with the entire MISA project completed in 2016.

Asbestos
In the meantime, while summer remediation work is taking place on the south side of campus and the building is closed to staff, students and visitors, and auditorium moves swiftly on the west side of campus, it’s a fitting time to remove asbestos too. 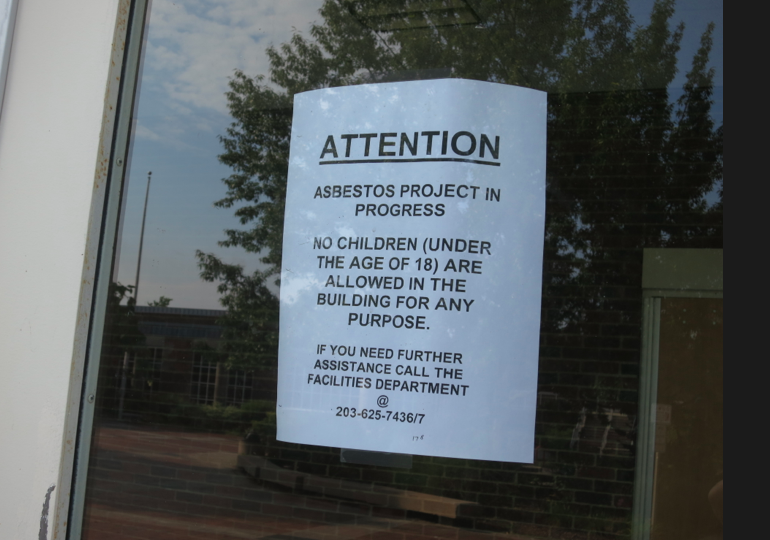 Rendering above reflects a view of the new Auditorium from the West parking lot. Science building is on the left and gym is on the right. -Greenwich Public Schools website

Greenwich DPW: We Will Mitigate for Loss of Trees at GHS in Accordance with Town Tree Warden