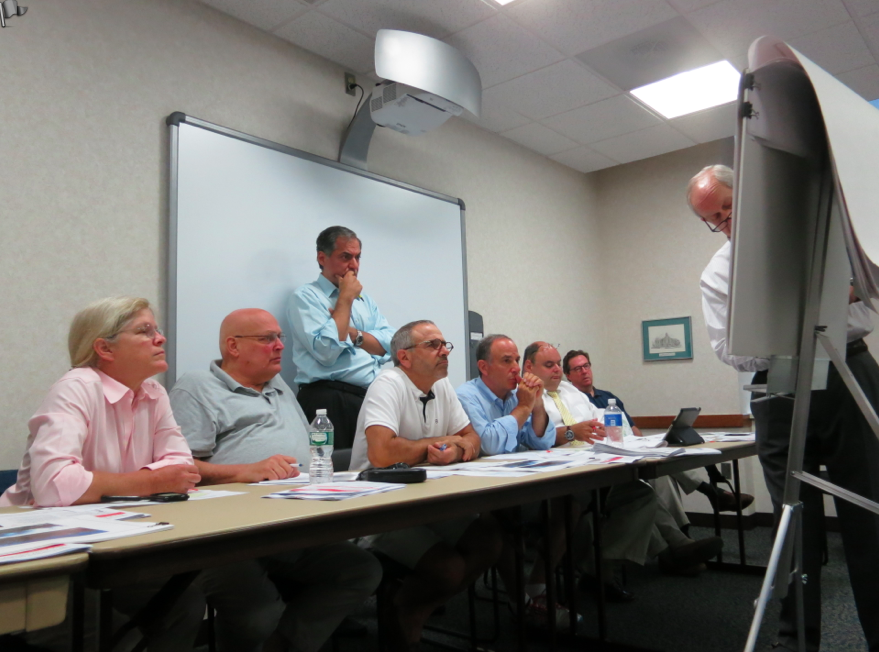 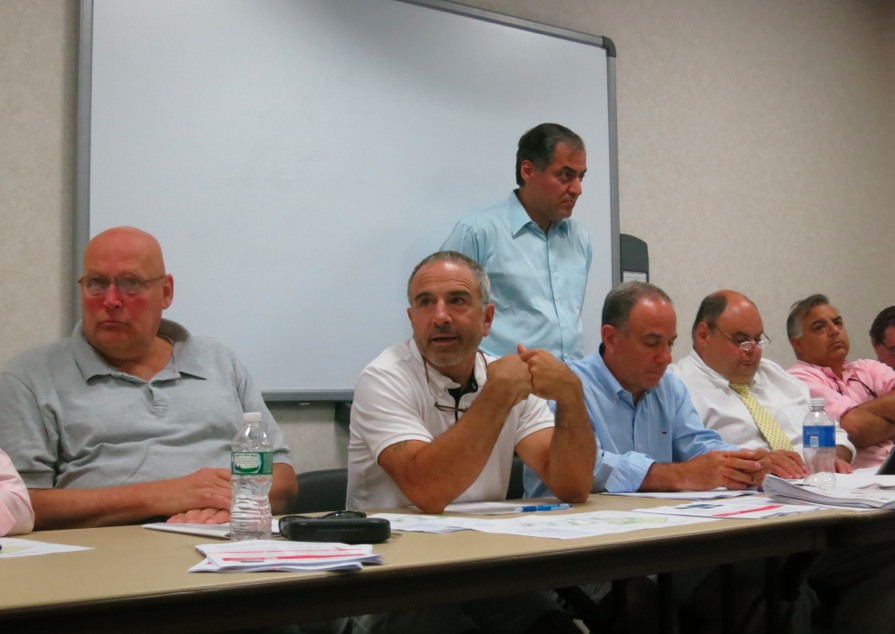 Thursday’s Architectural Review Committee (ARC) meeting in the Mazza Room was, if nothing else, a big meeting in a small room. With a capacity of about 50, the room brimmed with people for a lengthy discussion of what ARC Chair Paul Pugliese characterized as “the fine details” of the Greenwich Reform Synagogue’s plans for a house of worship in Cos Cob. 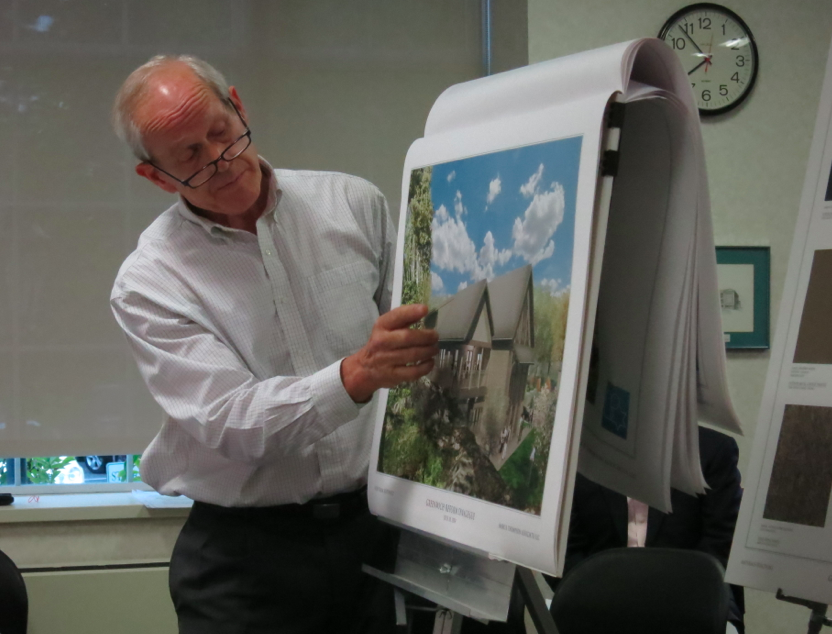 Although the GRS filed a federal lawsuit against the Town on Monday, claiming discrimination after their proposed plan for an Orchard Street synagogue was denied by default after a two-to-two ZBA vote with one abstention, the ARC nonetheless convened to review 14 finer points:

No sooner than Cindy Tyminski, a planner on staff at Town Hall, had read aloud the 14 points of review did Chris von Keyserling stand up and object to the meeting being held at all. 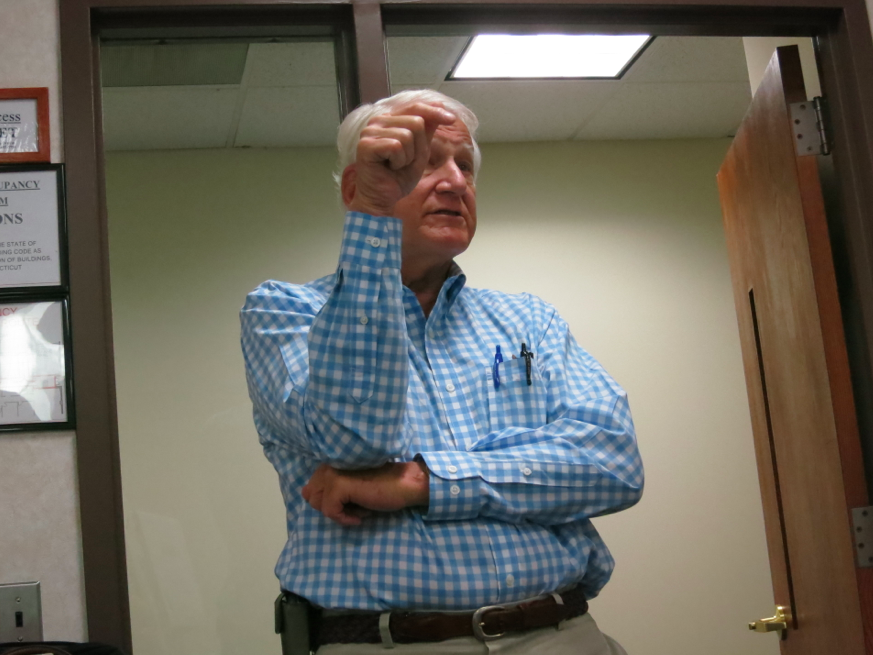 Chris von Keyserling objected to the ARC meeting being held, in light of the GRS lawsuit against the Town of Greenwich. Credit: Leslie Yager

“As you well know the Town is under a lawsuit by the applicant on a RLUIPA federal claim of discrimination. It is a very serious charge. It’s going to take a lot of difficult defense by the Town. It’s going to be very emotional,” said von Keyserling.

“The project is basically at this point in time, barring any outcome of the lawsuit, is a dead project. To go on doing this is reckless and irresponsible.” – Chris von Keyserling

“Therefore there is no necessity for the ARC to involve themselves. I think it would be unwise because if we are in a lawsuit we’re opening up a possibility of something being said, that could be a legal liability. Therefore all action on this project should be suspended until the RLUIPA lawsuit is settled,” he concluded. 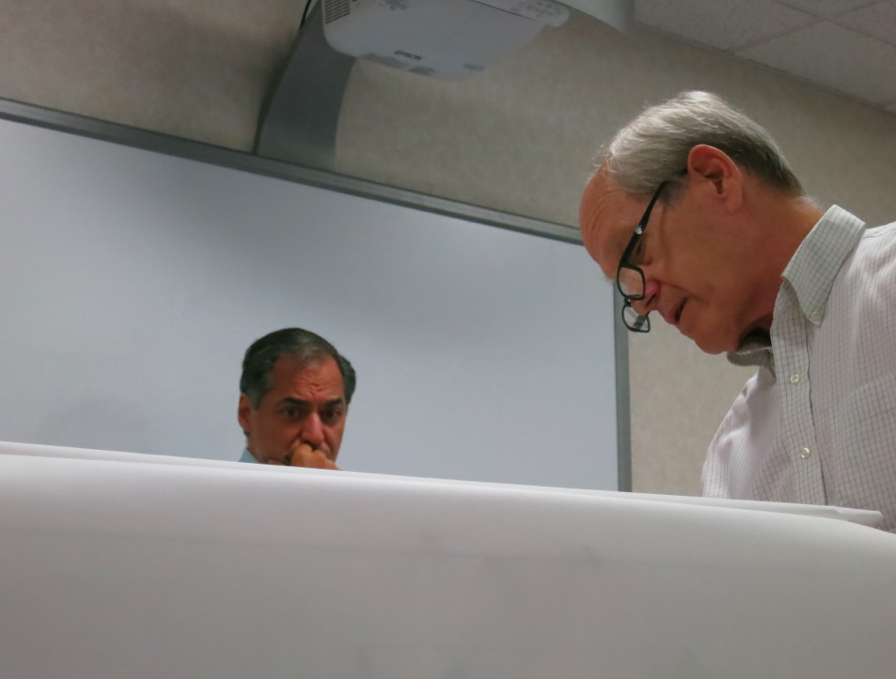 ARC chair, Paul Pugliese, said he had specifically asked the Town attorney and P&Z about continuing with the meeting after the ZBA declined the project. He said he had been told to go ahead, and issued a reminder that the ARC’s role is strictly advisory. “And we don’t determine our agenda either,” Pugliesi said.

Discussion turned to the 14 points of action, ultimately boiling down to what Pugliesi later described as the “finer details” for follow-up. 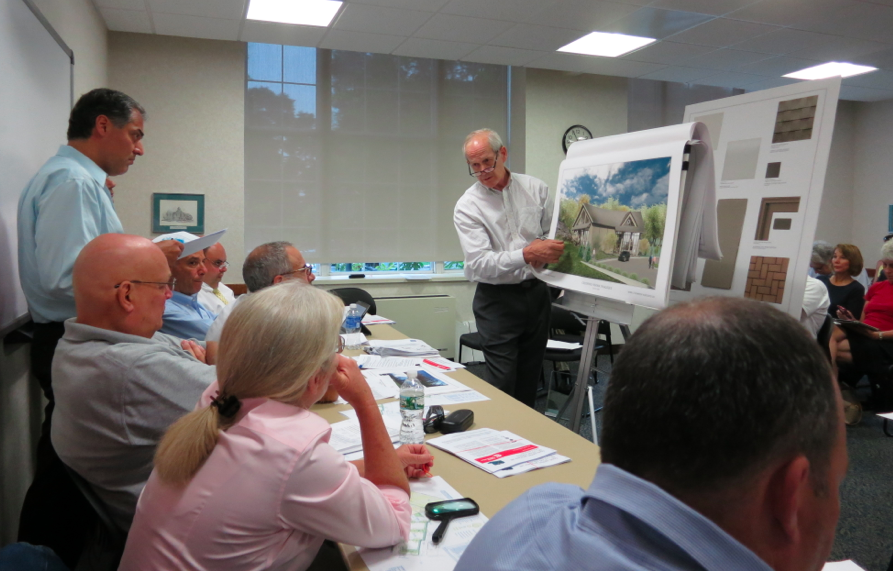 There was considerable frustration on the part of the committee members that the attorney for GRS, John Slane, standing in for Thomas Heagney, and the architect, Mark Thompson were unprepared, neither having provided updated copies of the plan to the ARC members.

Throughout Thursday’s meeting, there was a single enlarged set of architectural plans displayed on an easel that faced the committee. And, despite the presence of a jumbo white screen on the wall, ARC members angled for a view of the single set of plans, while most of the audience members were unable to see the plans at all.

“We asked you at the last meeting to bring them to the meeting,” said committee member Tracey Brown of the plans. “It’s very explicit what the requirements are, what you’re supposed to bring to the meeting. This drawing is so small it’s hardly readable,” she said of a landscape plan she had been given by the architect that was printed on 8-1/2 x 14″ paper. “The landscape plan is unreadable,” she said. “This is ridiculous.”

Tyminski said the attorney had provided a list of answers to the 14 points, but only one copy for the file, and not the sets of 10 copies of actual architectural plans or any other material for the meeting.

Cos Cob neighbor Mr. John Timm complained that he had come to Town Hall to review copies of the plans that are supposed to be submitted 3 weeks in advance, but had found none available.

A single copy of the enlarged the architectural plans was shared as best as possible by everyone in the room, and point by point the architect, Mark Thompson, responded to the 14 items. 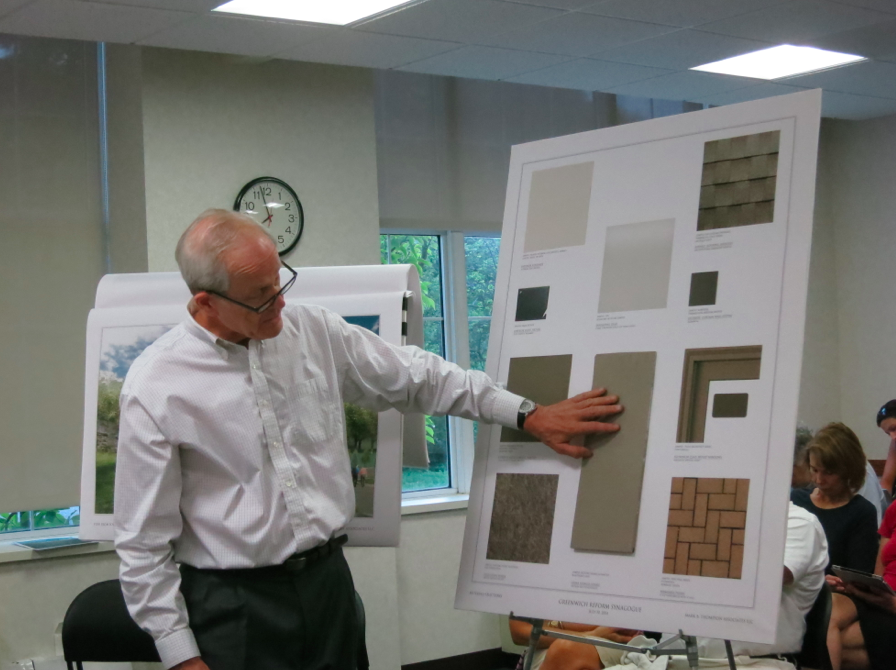 As the committee moved down the list of 14 issues, the topic of color choices for fascia, molding and trim was discussed at length.

ARC member Tracey Brown said she felt it would benefit GRS to have more contrast in the colors of the molding, trim and fascia. “The value of the density of the colors is so close,” she said.

“There is a theme of that,” said architect Mark Thompson of the “reserved” dark colors on the proposed synagogue’s exterior. “And then there is exuberance” said Thompson, referring to the blue palette inside.

After several more minutes of conversation about colors, GRS attorney John Slane objected to the conversation.

“The appearance of the building cannot be the basis upon how you approve the application.”

“That’s all we’re looking at,” said several members of the committee in unison.

From there conversation turned to placement of trees, types of trees, the inadequate harscape plans (including request for an accurate rendering of brick-look pavers, asphalt and trees that comprise the parking lot), outdoor lighting, and noise attenuation for the generator.

Barbara and Tony Lovallo expressed their frustration with the proposed placement of the GRS driveway and the hardwood tress offered to screen the Lovallos from the lights at the synagogue. The Lovallos said they didn’t want to have to start raking leaves and would prefer to see Hemlocks put up for screening. They also said they were concerned with the curb cut and hoped the proposed driveway could be moved so that congregants don’t mistake their driveway for the synagogue.

At the close of the meeting, Mr. Slane asked Mr. Pugliesi directly, “So there’s nothing preventing them from going forward?”

The next opportunity for the GRS proposal with ARC isn’t until September, but Planning & Zoning is scheduled to review the proposal on July 29.