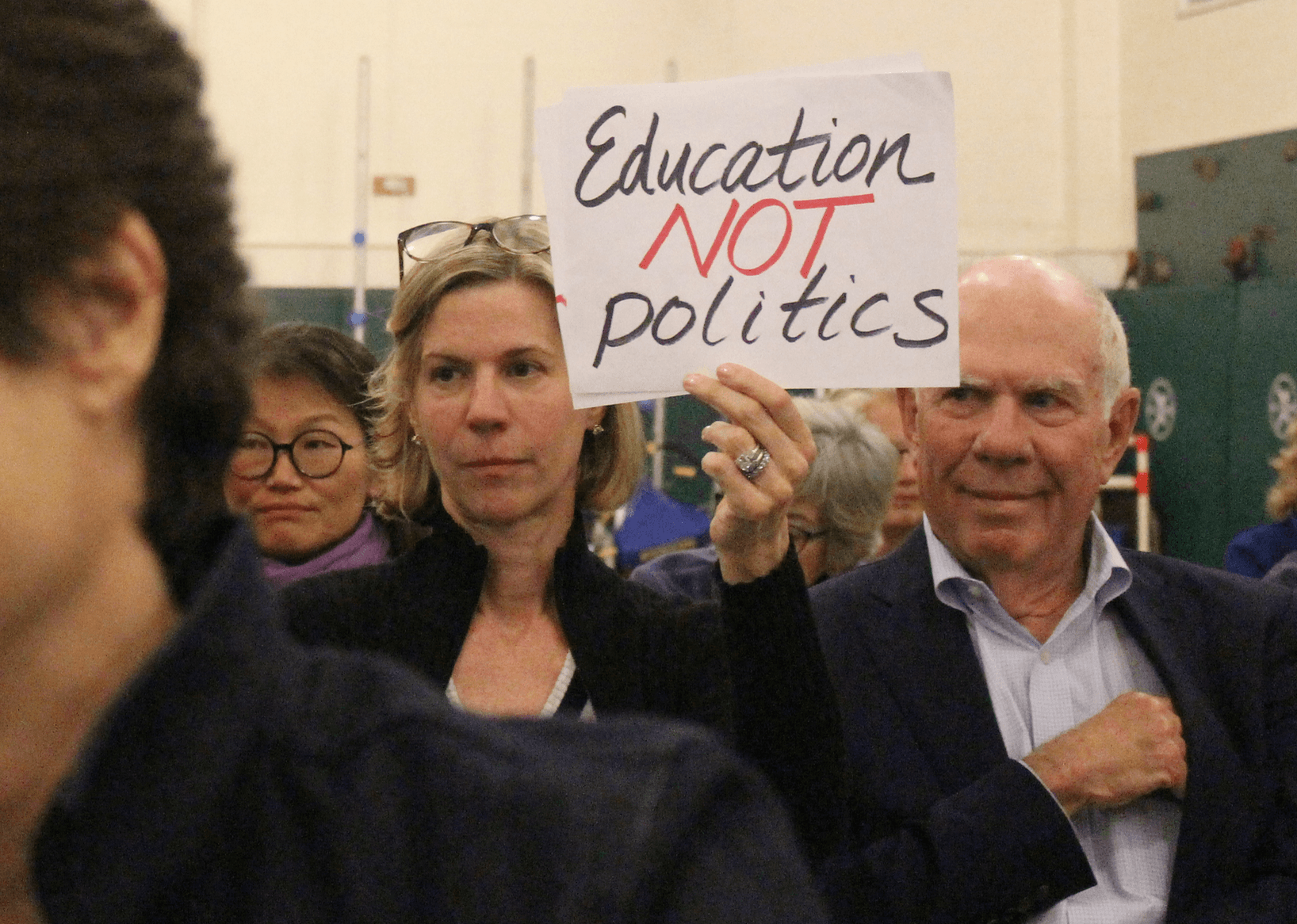 Sandy Litvack and his wife Joanna Swomley with a sign indicating opposition to BOE charter change. May 25, 2017 Photo: Leslie Yager 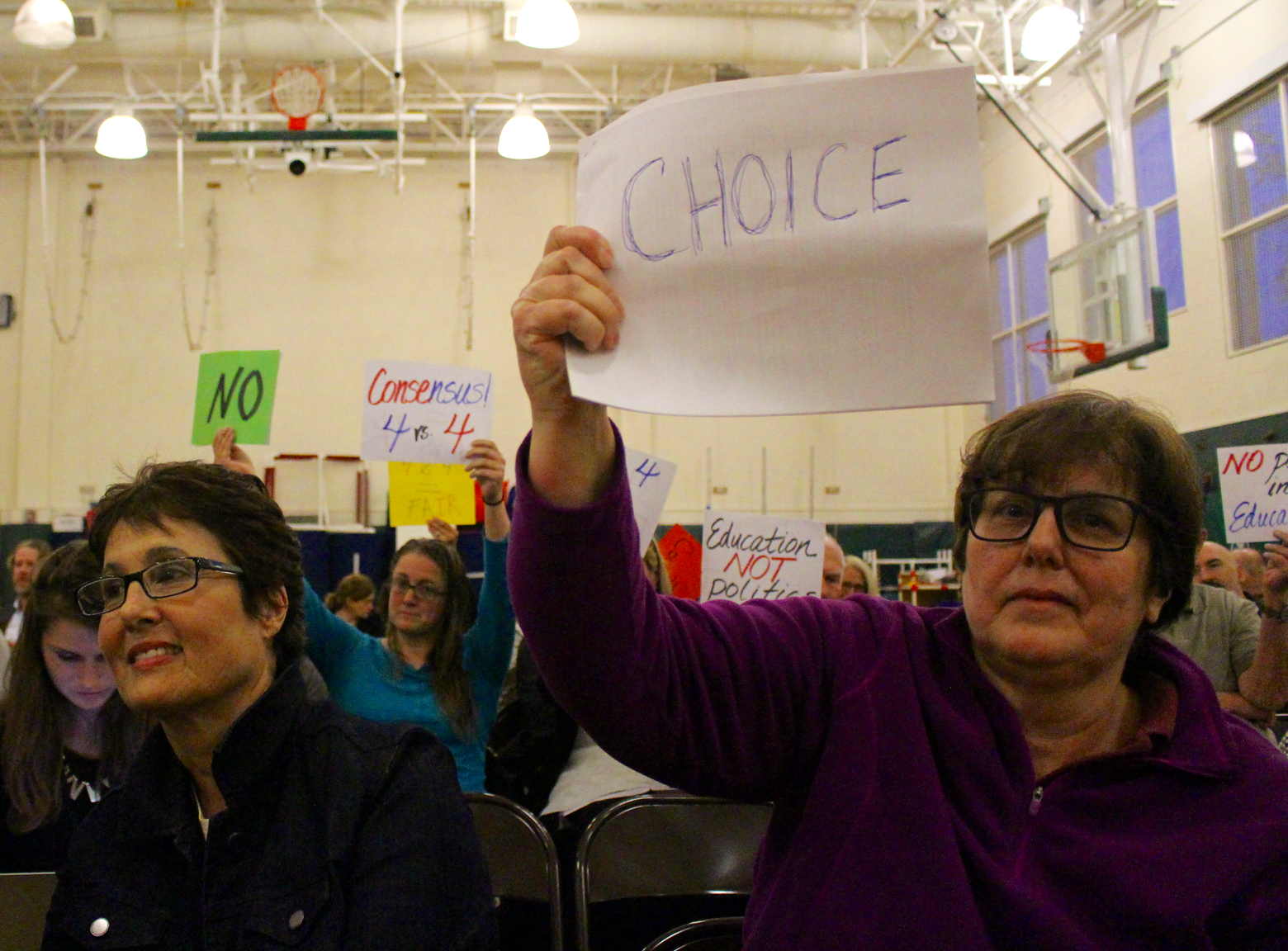 If there was one thing Peter Bernstein is known for other than his perseverance to stay on the Board of Education, it is his opposition to educational charter change. The change, if made, could result in one party having a majority of 5 on the board, which is comprised of 8 members, whereas the board has for decades been split between four Democrats and four Republicans.

He said that earning a spot on the ballot was amazing, and that feeling was only exceeded when he learned he was the top vote-getter to earn a spot on the board.

Then, to boot, Bernstein said he was happy that the majority of his colleagues voted for him as their new chair on Monday night.

Over the summer the situation heated up following incidents at the dump and train stations and Bernstein took Sherr and Auerbach to Stamford Superior Court over their alleged attempts to distract and interrupt his petition campaign.

Though the judge ruled against Bernstein, saying his opponents were exercising their free speech, it wound up not hurting the petition candidate in the end.

Bernstein would go on to far exceed the number of signatures needed. In many ways the high number of votes for Bernstein was a referendum on the voters’ opinion on charter change: They don’t want it.

Last May dozens of people said as much at a BOE hearing that went until about 1:00am.

More recently, a charter change hearing was conducted by the Selectmen’s Charter Change committee on Nov 14 at Central Middle School and chaired by Barry Rickert. The hearing was held the same night the BOE held a hearing on potential litigation against a GHS neighbor of Greenwich High School.

At that hearing, over a dozen speakers voiced their objection to charter change, and many specifically objected to the idea of a town referendum on the issue.

Mr. Rickert’s most memorable moment was when he made a dismissive comment during Meghan Olsson’s remarks.

Ms. Olsson, newly elected Democrat to the BOE said she was elected in part due to her opposition to charter change. “Frankly the charter works as drafted, and the board works best as a balanced board,” she said.

Rickert snapped at Ms. Olsson, saying, “Do people know that you were appointed?”

After a round of boos, Ms. Olsson suggested the committee was out of order.

Carol DeSalvo, a former RTC member and 26+ year employee of the the BOE and superintendent said, “It would seem to me that after the election results in town, it should be obvious that our voters have voted against charter change,” to which Rickert replied multiple times, “You’re out of order.”

Rickert clarified that his committee was appointed by the Board of Selectmen. “We’re not choosing what to pursue. We were appointed to address an issue.”

“I think the voters spoke loud and clear when myself and the two Democratic colleagues got more votes than anyone else,” Bernstein said on WGCH, referring to charter change.

Educational charter change is on the Board of Selectmen’s agenda for Thursday morning, Nov 30.

The meeting will include time to recognize the contributions of Drew Marzullo who served for 8 years as Democratic Selectman.

Marzullo, who did not win another term, has, like Bernstein, been a vocal opponent of charter change.

“It is my hope that they put this to bed for the foreseeable future,” Bernstein said, of charter change. “I don’t think this is something that anyone needs to talk about again. I don’t think it’s anything that’s necessary. It certainly doesn’t help meet the needs of students.”

Sherr out; Bernstein In as Chair of Board of Education. GHS Neighbors Balk at Litigation, Say GHS is “Maxed Out”

James Waters: Time to Put the Charter Change Zombies Away