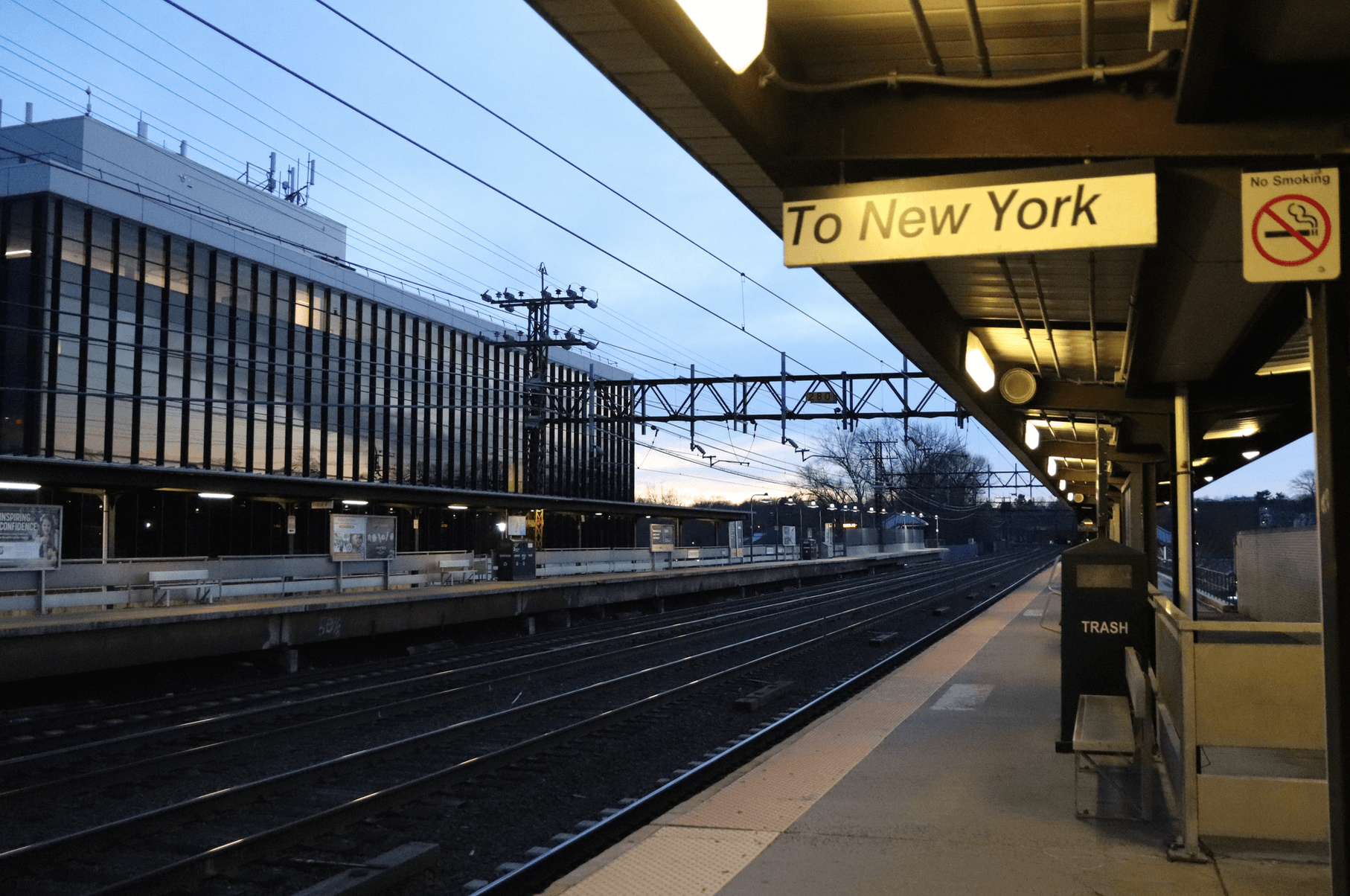 On Tuesday the State of Connecticut updated numbers for COVID-19. The State has 618 confirmed cases, and Fairfield County represents 384 of them. Fairfield County has 7 of the state’s 12 deaths.

As of Tuesday, Greenwich has 41 confirmed cases of COVID-19.

On a press conference call with Greenwich First Selectman Fred Camillo Tuesday he said 133 total patients had tested positive at the Greenwich Hospital outpatient site, and 33 COVID-19 positive patients are in the hospital.

Camillo tried to put the pandemic in perspective.

“This is a tough time. It’s economical. It’s livelihoods. And it’s public health. It’s a trifecta of worry,” he said. “But we’ve had crises before in our country. We all lived through one in 2001. We’ve had world wars. And, in 1918 – the last great pandemic – we lost 200 people in Cos Cob, including my grandparents.”

“Those six kids had to raise each other,” he said. “They were young. One was my grandmother. As teenagers, they raised themselves. If you look at it that way, we are much more advanced as a society now, with technology with more tools at our disposal.”

“American people are at their best at times like this. We’re starting to see that already in Greenwich. People are stepping up.” – Greenwich First Selectman Fred Camillo 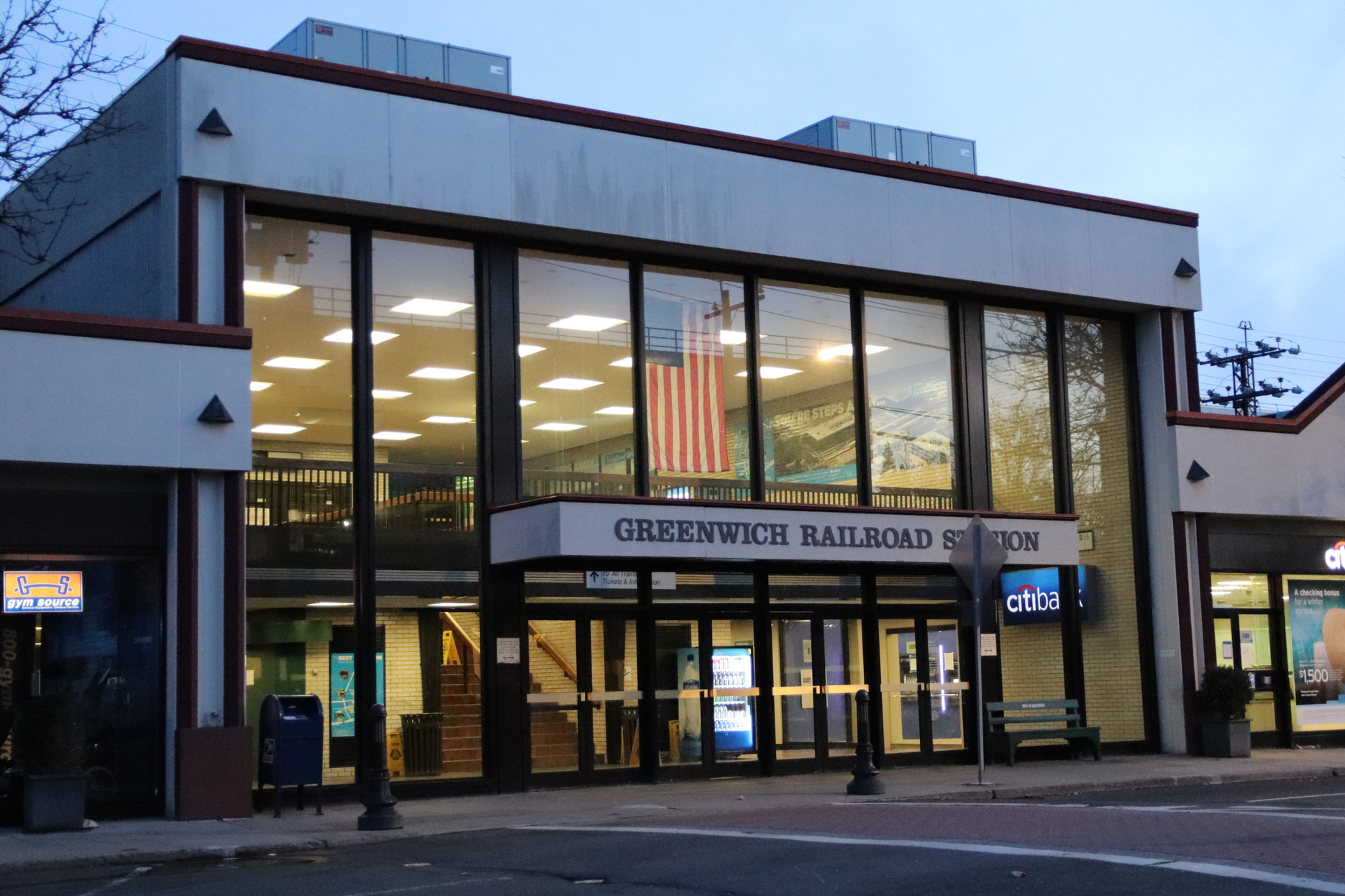 Camillo announced that Greenwich Plaza train station building, which is privately owned by Ashforth Company, will close as of 8:00pm on Tuesday.

He said the decision was made because the waiting room has an elevator, which does not allow for the minimum of six feet for safe social distancing.

Camillo said ridership has dipped because so many businesses and organizations are closed, but the trains continue to run on existing schedules. Pedestrians will be directed by signage to the Track 4 side of the complex.

Patrons needing elevator access to Track 3 side of the complex are instructed to use the pedestrian bridge crossing.

Town-operated stations in Cos Cob, Riverside and Old Greenwich remain closed to the public, and the closures do not impact train schedules.

Camillo urged residents to maintain social distancing, but he pointed out that the town has about 90 miles of sidewalks adjacent to pubic roads and many trails.

As far as enforcement of the Town parks closure, Camillo said police will respond to groups who are congregating, but residents are encouraged to talk walks through the parks. Violators  may be cited for Trespassing.

“We’re not looking to throw people in jail. If you’re walking, say through Bruce Park,nobody’s going to bother you. If you stop and congregate with others you’re going to get thrown out. The parks are closed for gatherings. We understand some of these parks are cut through and walking is vital, but do not hang around the parks.” – First Selectman Fred Camillo on his directive to close Town Parks

As for the recent leaf blower ordinance modification, Mr. Camillo said he’d received no complaints about a lack of enforcement.

He said anyone with a complaint about violations should direct their calls to his office.

“We have not had one complaint yet,” Camillo said. “You can call this office and we’ll direct personnel over there to the alleged violators. I haven’t seen anything. It may be a case where they don’t know it’s in effect.”

Nearby in Darien the First Selectman Jayme Stevenson approved at least one market suspending the State’s plastic bag ban. 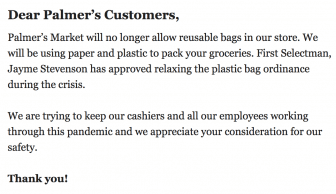 On March 20, Palmer’s Market in Noroton Heights sent customers an email instructing them to leave their reusable bags at home in order that the market could keep their cashiers and employees working during the pandemic.

“Palmer’s Market will no longer allow reusable bags in our store,” the emails said. “We will be using paper and plastic to pack your groceries. First Selectman, Jayme Stevenson has approved relaxing the plastic bag ordinance during the crisis.” 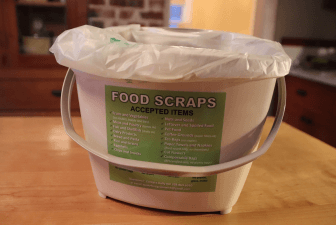 Camillo said the Town’s food scrap recycling program may have to be postponed. It is due to commence on April 1.

“I am going to start my own personal composting,” he said. “We’ll encourage people who can to start their own composting piles to do so in April.”

As for the Governor’s executive order allowing boards of selectmen throughout Connecticut to be their towns’ final authority on municipal budgets, Camillo said he’d received an opinion from the town attorney on Tuesday and has a meeting on Wednesday with “interested parties.”

Greenwich Police say anyone experiencing mild symptoms of illness and are not in a high risk group that you contact your personal physician rather than call 911. If you have mild symptoms, do not go to the emergency room before contacting your doctor for direction. If you have any serious symptoms, please do not hesitate to call 911. Please save 911 for real emergencies.

For those residents experiencing challenges with food, finances, and living arrangements, please call the Department of Human Services at 203-622-3800.

If you experience price gouging, please contact the State Attorney General’s Office, which has a dedicated phone line and website to collect information: 860-808-5318 or online at https://www.dir.ct.gov/ag/complaint/