Saturday, Nov 5 9:45 am:This post has been updated to include feedback from Fred Camillo.

Specifically, a typewritten message from someone identifying themselves as an anonymous Republican. The letter, which was attached to Bhargava’s postcard mailer said to, ‘Go back to where you came from.’ The writer, who also drew a mustache on Mrs. Bhargava’s photograph, signed off on the letter, “A very happy Republican.”

At the foot of the note the sender wrote in longhand, “Go Trumph!” 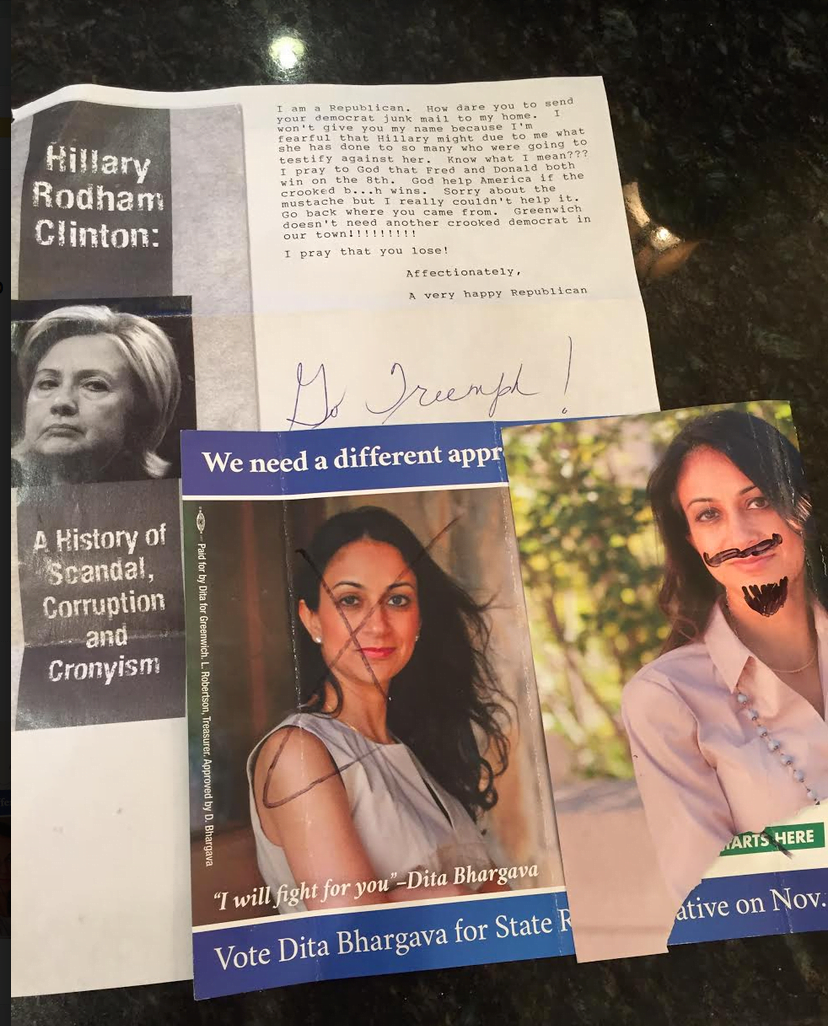 “In my opinion piece, which was very heartfelt, I explained why elected leaders should be held accountable for supporting Donald Trump,” Bhargava said on Friday. “Support for Trump implicitly condones his ugly rhetoric and gives others an okay to engage in it too.”

Bhargava said that is exactly what happened, and that as she was sending out her op-ed piece, the disturbing letter addressed to her was on its way to her home.

“This racist attack turned the clock back for me over three decades,” said Bhargava whose mother immigrated to Canada from India, and moved with Dita to the US in 1995. “As a child, growing up in a community lacking in cultural diversity, these horrible piercing words were often spoken to me.”

Bhargava said it’s disheartening after all the progress that has been made in the US, to hear such words in Greenwich, which, Bhargava said is filled with decent, warm and accepting people of high moral standards.

“Regardless of what happens in this election, we must rise above this ugly rhetoric. It’s so important that we come together as American and Greenwich residents to continue to create a world for our children and future generations that embraces tolerance and unity and not hate and divisiveness,” Bhargava said.

On Saturday, Fred Camillo said, “I was made aware of this note Friday morning and can’t stress enough that people should be passionate without letting it get to a point where anger gets the better of you. As someone who has been on the receiving end of a few very ugly notes years ago, all having to do with politics, I know that we are better than that.”

“I have heard from people in my travels, both Democrats and Republicans, that my opponent’s mailings, which have featured unflattering pictures (the epitome of dirty campaigning) and a complete distortion of quote made by me, have appalled them,” Camillo continued, adding that his campaign had received a mailer featuring a Photoshopped photo by one campaign, which he said was something that he hadn’t experienced before.

“What I am asking people to do when they receive such mailings is to just throw them in the recycling basket. That is where they belong. They do not speak to the issues, and just seek to distract and attack,” Camillo concluded. “Historically, we are known as a town that has civil debates on the issues, so I hope that we never see the likes of a campaign waged like this again.”

Earlier in the week, Camillo said in his op ed piece that he had been offended by Ms. Bhargava’s recent mailing that featured a photo of him opposite an unflattering photograph of Donald Trump. The mailer quoted Camillo saying of Trump, “He’s spot on.”

Camillo, in his op-ed piece published the same day as Ms. Bhargava’s, spoke of “taking the high road,” and vowed to rise above his opponent’s negative campaigning.

Camillo: Despite nasty and distorted mailings, I chose to take the high road.