At Tuesday’s P&Z marathon that ran from 6:00pm until after 1:00am, the commissioners entertained the final site plan proposal* for Watsons Catering’s anticipated move to the newly constructed building at 1 Glenville Street.

On behalf of Watson’s Catering, Eric Brower said that after the May 20 P&Z meeting, he and the owner of Watsons had met with neighbors at the proposed location. 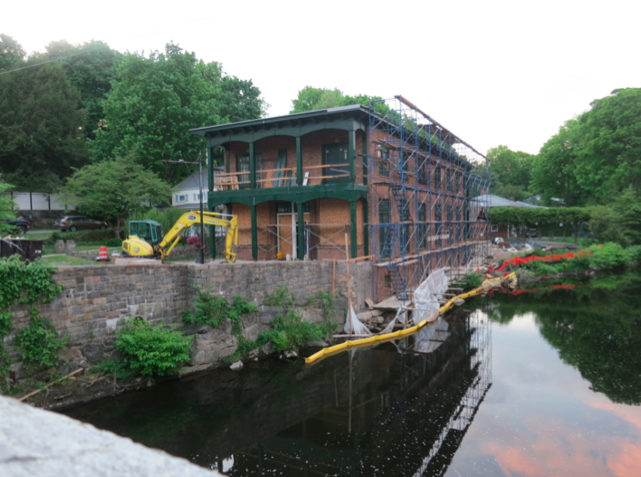 One Glenville Street in June, 2014. The site is approved for two retail units and two apartments upstairs. Credit: Leslie Yager

Also, he reminded commissioners, “Prior site plan approval actually requires the installation of a pedestrian crosswalk from one Glenville Street, directly across, to place you directly at the driveway to The Mill.”

Brower explained that invitations to Watsons tasting events would feature information about where to park and cross the road from The Mill to One Glenville St.

Caterer or Restaurant?
Brower and commissioner Nancy Ramer again disagreed about regulations, with Ramer insisting the proposal puts Watsons in the category of a restaurant rather than retail food establishment.

Brower said of the site plan, “Clearly it contemplated more than 12 people or we wouldn’t have had to have this elaborate, restrictive parking requirement that is even more restrictive than that of restaurants.”

Longtime Neighbor Cites Traffic, Parking and Incompatibility with Local Business Retail LBR-2 Zoning
During public comments, Siegrun Pottgen, Co-Chair of the Glenville Preservation Association, who has lived at 9 Glenville St for 51 years, recounted last week’s meeting with attorney Brower and Susan Scully of Watsons who she described as a very nice lady.

“I have seen the destruction of Glenville,” Pottgen said, quoting the Municipal Code and the LBR-2 Zone goal as, ‘to protect and encourage neighborhood oriented retail development and provide central but limited concentration of personal services at convenient locations of to meet the frequent recurring needs of nearby residents.’

“I don’t think we need catering on a steady basis. Does invitation only wine tasting meet this goal? No,” Pottgen said.

Pottgen said there are many times she has difficulty pulling out of her driveway due to heavy traffic, and has concerns that Watsons events proposes a 6:00pm start time that coincides with rush hour.

Pottgen, who is a state marshal for Fairfield County, said that last week’s meeting with Brower and Scully resulted in a compromise that Watsons  events would end by 10:00pm instead of 11:00pm, but, the earlier end time would be difficult to enforce.

“Enforcement. Without that, you got nothing,” Siegrun Pottgen, Glenville Street neighbor,  Co-Chair of the Glenville Preservation Association and State Marshal for Fairfield County

“Valet parking creates more problems. Most people are gong to avoid it and park wherever they want. It is also dangerous to be moving cars across a busily traveled road,” Pottgen said. “I had three accidents right in front of my house on 4th of July.”

Pottgen said she also had a major concern about a crosswalk placed in the short stretch on Glenville Street between the traffic light at Riversville Rd and the light at Glen Ridge Rd (outside Stop & Shop). “There is a very short distance between the two traffic lights. There’s too much traffic. It’s impossible.” 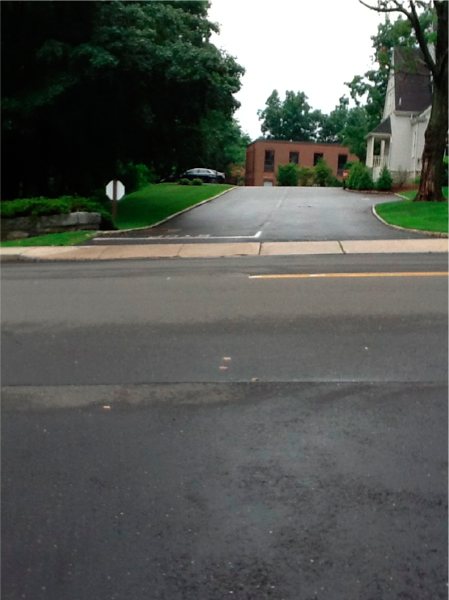 Entrance to The Mill complex where Watsons has an arrangement for parking during invitation-only tasting events at their proposed One Glenville Street location.

“Lastly, the 30 condo owners across the street, on their own, know nothing about this and there is only one driveway,” Pottgen said.

Attorney Brower said, “She doesn’t fully understand the details of the application. The crosswalk was mandated as a term of the proposal. There will be a crosswalk. It’ll say stop. Traffic will have to yield.”

“The other part is the wisdom of the non-valet parking and simply have people walk across,” Brower continued. “We’re not going to have the kind of traffic that she says. Other neighbors don’t have the objection that she does.”

“There is potential for coffee shops and pizza places. You’re looking for demand for 24 spots, which would be much greater than what we’re proposing,” Brower said. “With liquor, she is allowed at her catering facility to allow people to bring liquor or provide it for free. We’re happy to explore further with the neighbors.”

Maitland noted Brower had added two items to his revised letter, which the attorney acknowledged.

“One is to place our curb cut facing the entrance to Angelus Drive,” Brower said, “And a sign stating parking for Watsons is not allowed and post Angelus Drive, which is resident parking only.”

Brower requested an extension, which was granted. Watsons is on the agenda for the ZBA meeting on Wednesday, July 23 and on the P&Z agenda for July 29.

*Riversglen LLC; application PLPZ 2014 00174 for a final site plan for changes to the approved final site plan special permit mixed use building with ground floor retail and two apartments above; proposed is to occupy the entire 4,327 sq.ft. building with a catering company including Liquor License (variance required) on a 9,278 sq. ft. property located at 1 Glenville Street in the LBR-2 zone. (Staff:PL)(Must decide by 7/16/2014) (Maximum extension available to 8/16/2014) (Continued from the 5/20/2014 meeting, and listed on the 6/17/2014 meeting, but postponed by Applicant) (Seated: Heller, Maitland, Alban, Brooks, and Levy)