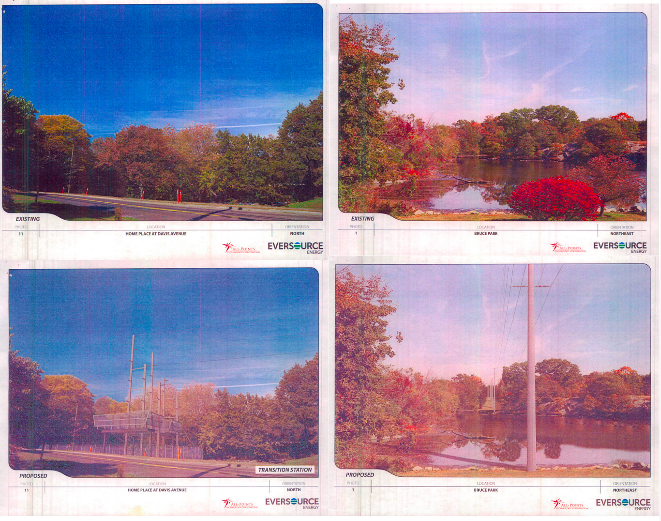 In her letter and report, DeLuca states that Greenwich has repeatedly asked Eversource for evidence to support their claim that there are no alternatives to their proposal. She says that, to date, none have been provided.

The letter and document were sent to the media at 5:00pm on Nov. 24. Asked for comment over the Thanksgiving holiday, Eversource spokesperson Frank Poirot, said Eversource would like to give a thorough and thoughtful review before responding. 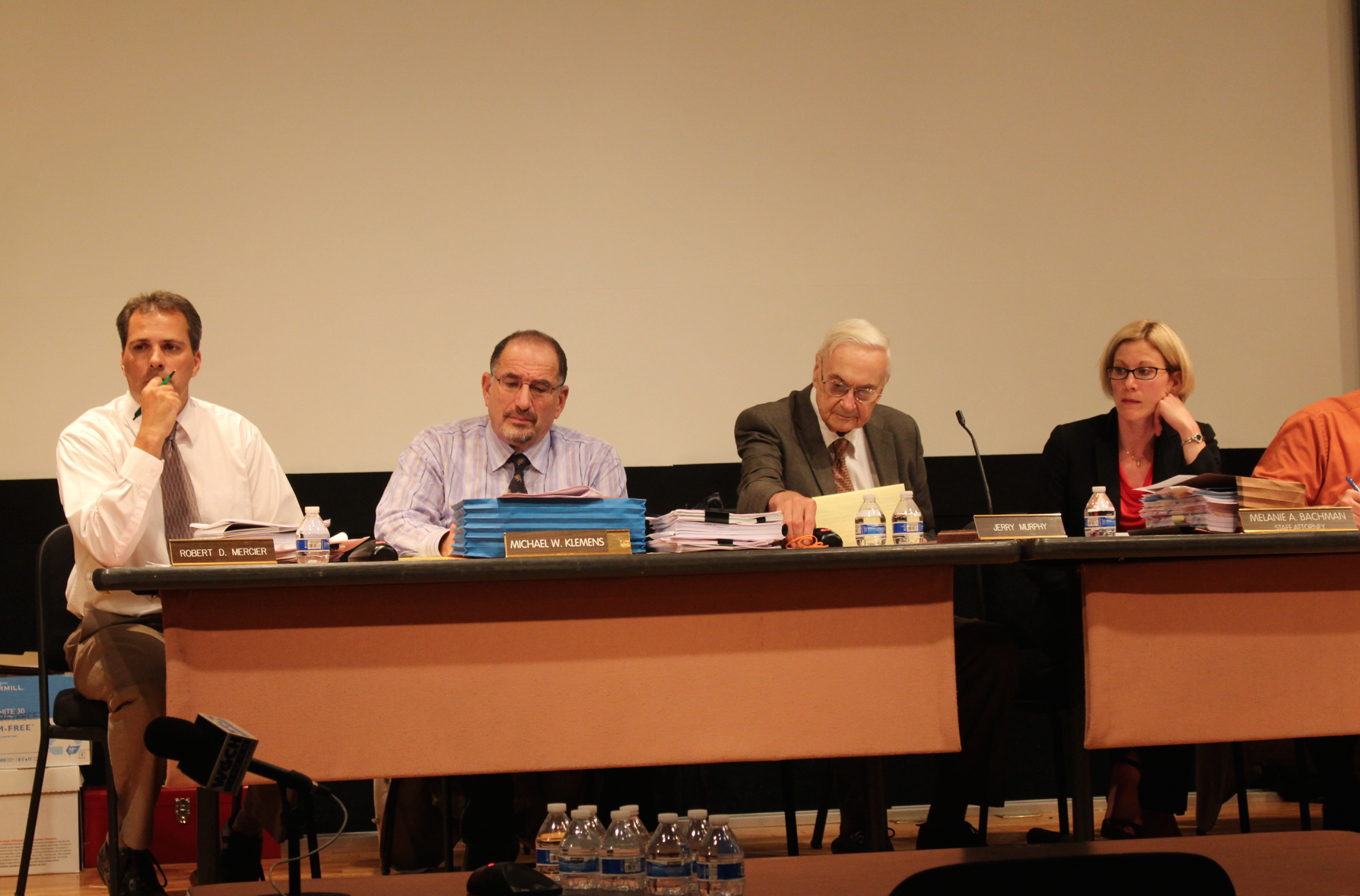 Specifically DeLuca said explanations why transformers at Cos cob can’t be upgraded and why they can’t continue along the Metro North right-of-way, have never been provided.

In her letter, DeLuca elaborates on a host of concerns about the environment, and impact on Bruce Park.

“The Town’s communication with Eversource never reached conclusion and to suggest that we are in favor of lines through our Park, or that the Town has agreed to such a route is simply incorrect!” DeLuca states in her letter to the Siting Council.

“This contradiction regarding process and procedure has tested our trust and left us, even more so, wanting to ensure our interests are protected,” DeLuca states in her letter to the Siting Council. 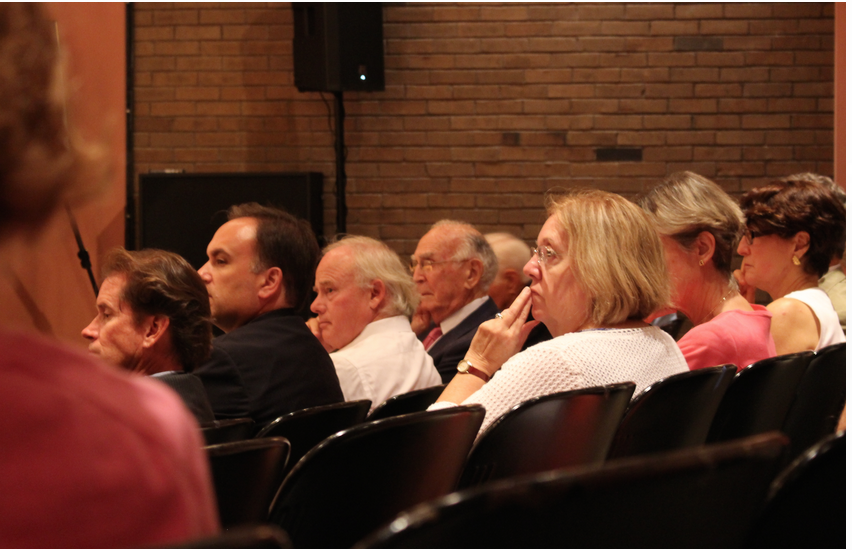 On Sept. 1, local officials turned out for the CT Siting Council public hearing on Eversource’s application for a new substation at 290 Railroad Ave and 2.3 miles of underground transmission lines connecting to the Cos Cob station. Credit: Leslie Yager

DeLuca’s letter goes on to say that Greenwich wants to work with both Eversource and the Siting Council on an economical, responsible solution that doesn’t put the public or the environment at risk during construction and eventual operation.

She outlines four points of concern, starting with the question why can’t Eversource put poles on both sides of the railroad right-of-way with arms hanging into the right-of-way to allow the lines to go overhead.

“It seems Eversource is still unwilling to examine alternate designs, at least with the Town, one of which would run the new feeders along the existing Metro-North railroad tracks,” she writes. “It is unfathomable to the Town that State controlled property, that supports this technology throughout the State, is being dismissed out of hand without proper consideration of such options.”

DeLuca’s also questions Eversource’s numbers on Greenwich’s consumption data, and their declaration that as early as 2017, the Town will exceed existing capacity.  She objects to the assertion that Greenwich’s growth will mirror that of Stamford, and ultimately exceed capacity by 6.8% by 2024.

Her third point is that the proposal is for far more capacity than necessary. “To overcome a 6.8% deficiency (in 2024), the utility is proposing a 100% increase in their available capacity.” 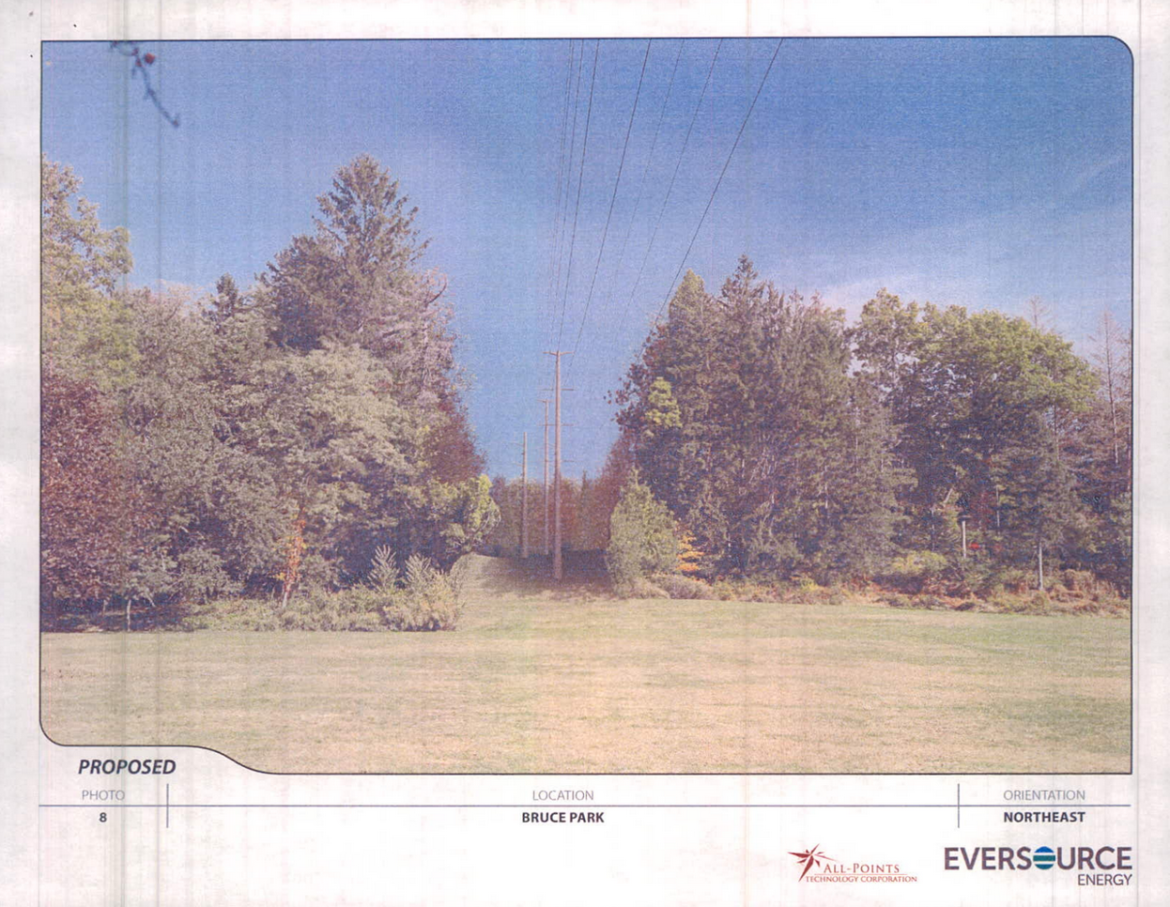 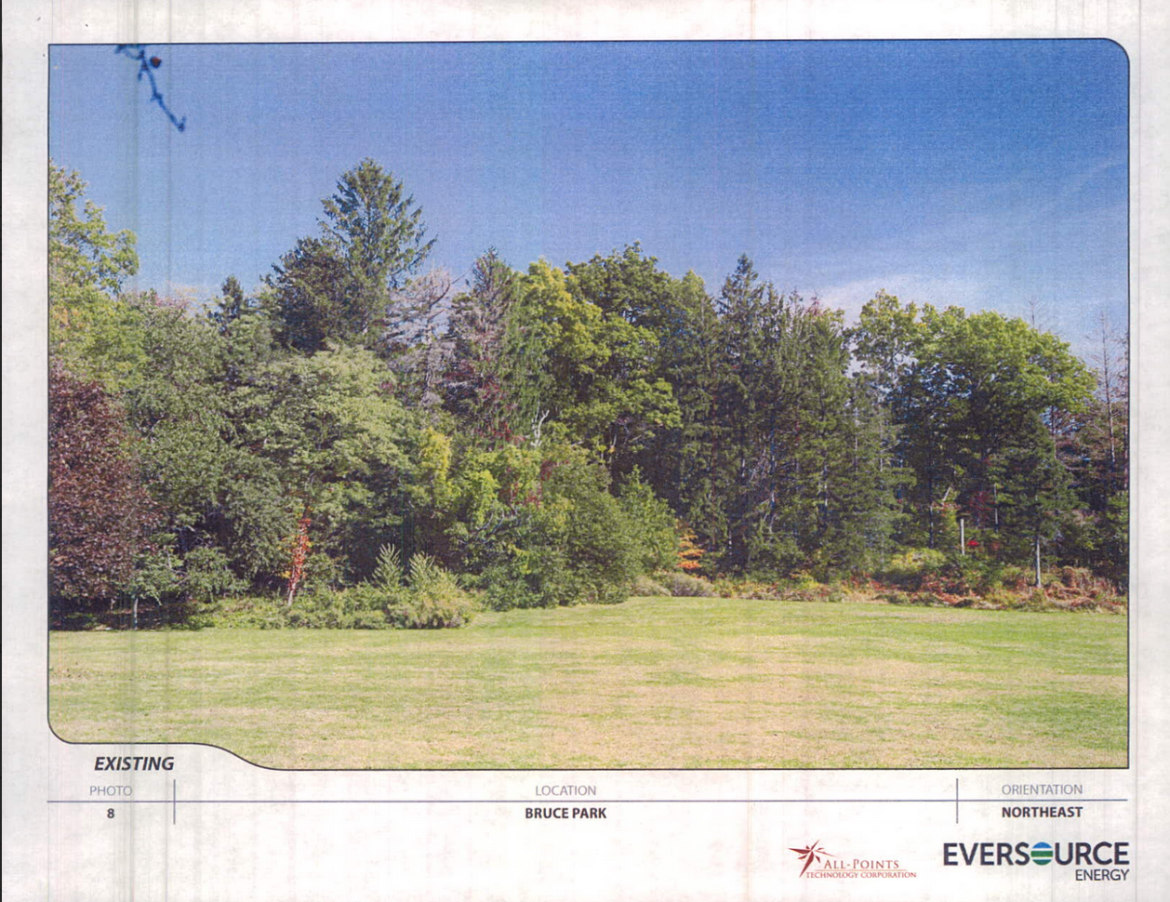 DeLuca said the town has reservations about safety and inconvenience of running two 115kv lines through Bruce Park during the lengthy construction process and when the feeders become operational.

Finally, DeLuca said Eversource’s cable technology employs a petroleum-based fluid to insulate the cables, and describes that as problematic from an environmental standpoint. She said the system has the potential to leak, and suggests Googling “Long Island Sound clean-up of failed power cables.”

She said that per Eversource’s plan, 2.3 miles of these cables running between Cos Cob and Railroad Ave would contain more than 100,000 gallons of this fluid.

DeLuca writes that as an alternative to the pipe type cable through Bruce Park and Museum Drive, Eversource has proposed installing overhead wires on 100 + foot high steel poles. “Although Bill 5418 prohibits the Siting Council from siting certain overhead lines carrying between 345 and 495 kilovolts within 250 feet from any school, day care facility, camp or playground, which is 1/3 of the voltage being discussed in this instance, it would make most sense to site overhead lines away from the well-used Bruce Park if there is a viable alternative.” 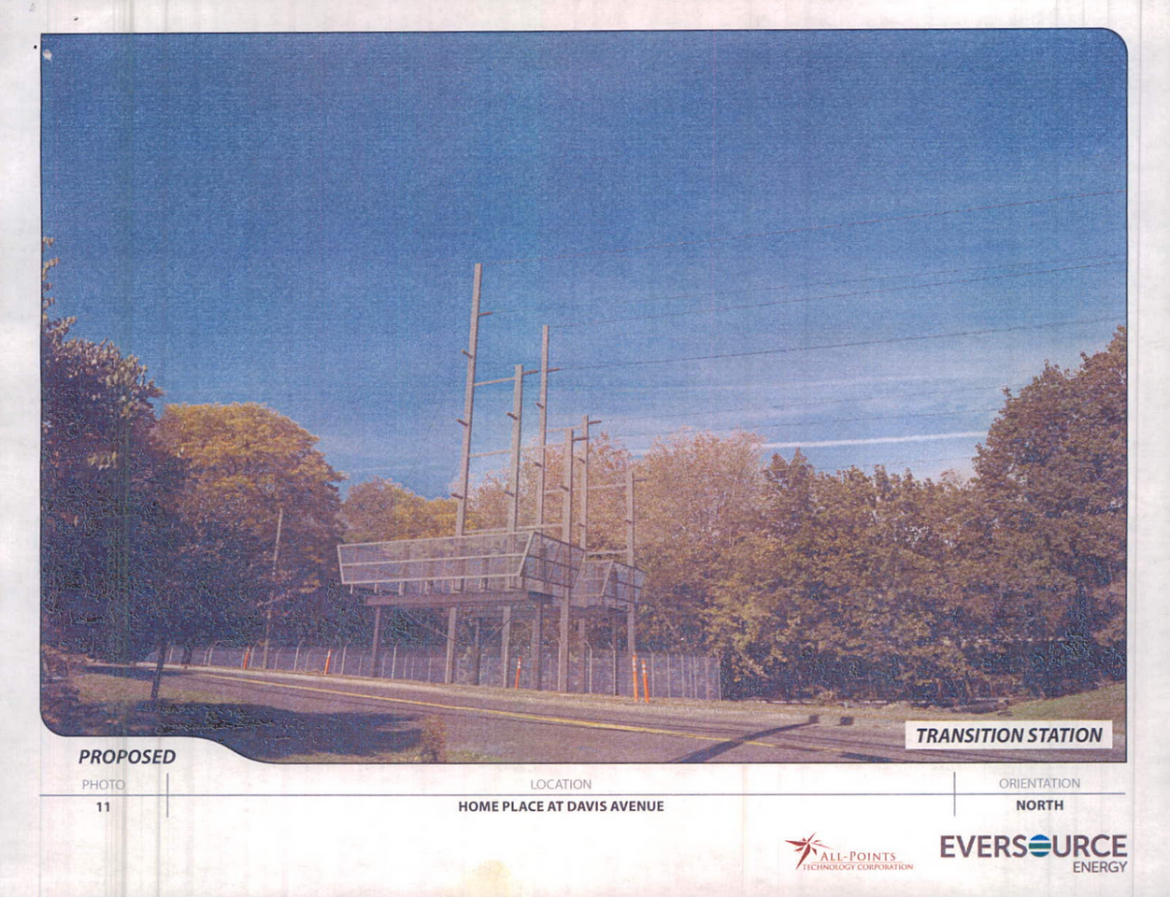 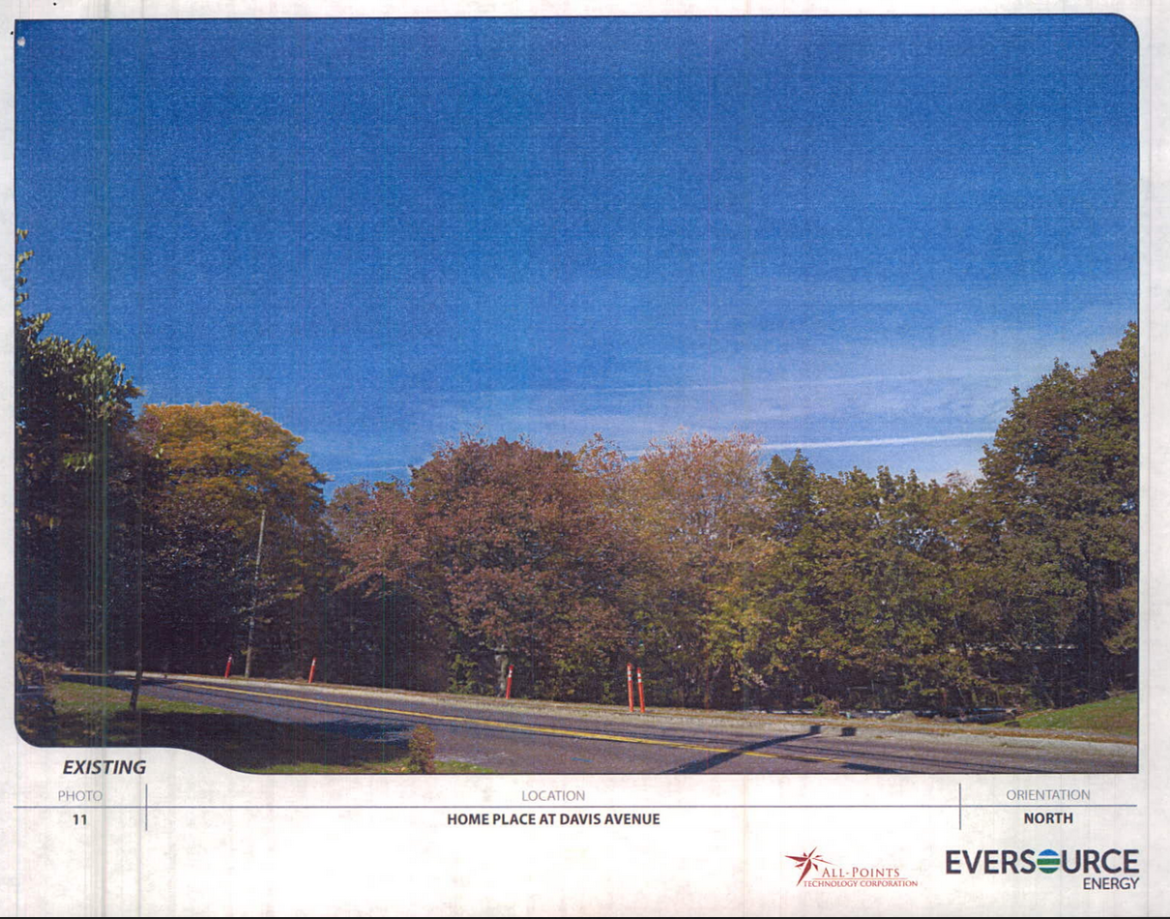 Back on Sept. 1, residents filled the Cole Auditorium at Greenwich Library for the Connecticut Siting Council’s public hearing on Eversource’s application for their Greenwich project. Greenwich residents turned out in force and voiced their objections.

“At present, nothing offered by the Ct Light & Power company, DBA Eversource, confirms the necessity of the project, which as proposed is expected to cost $140 M and would dramatically affect electric rates in Connecticut,” Tesei said in his letter, pointing out that Connecticut rates are the highest in the contiguous 48 states.

“I respectfully urge you to withhold any support of such an undertaking until a careful, thorough review of the project, based on the most current and accurate data is completed,” Tesei wrote. 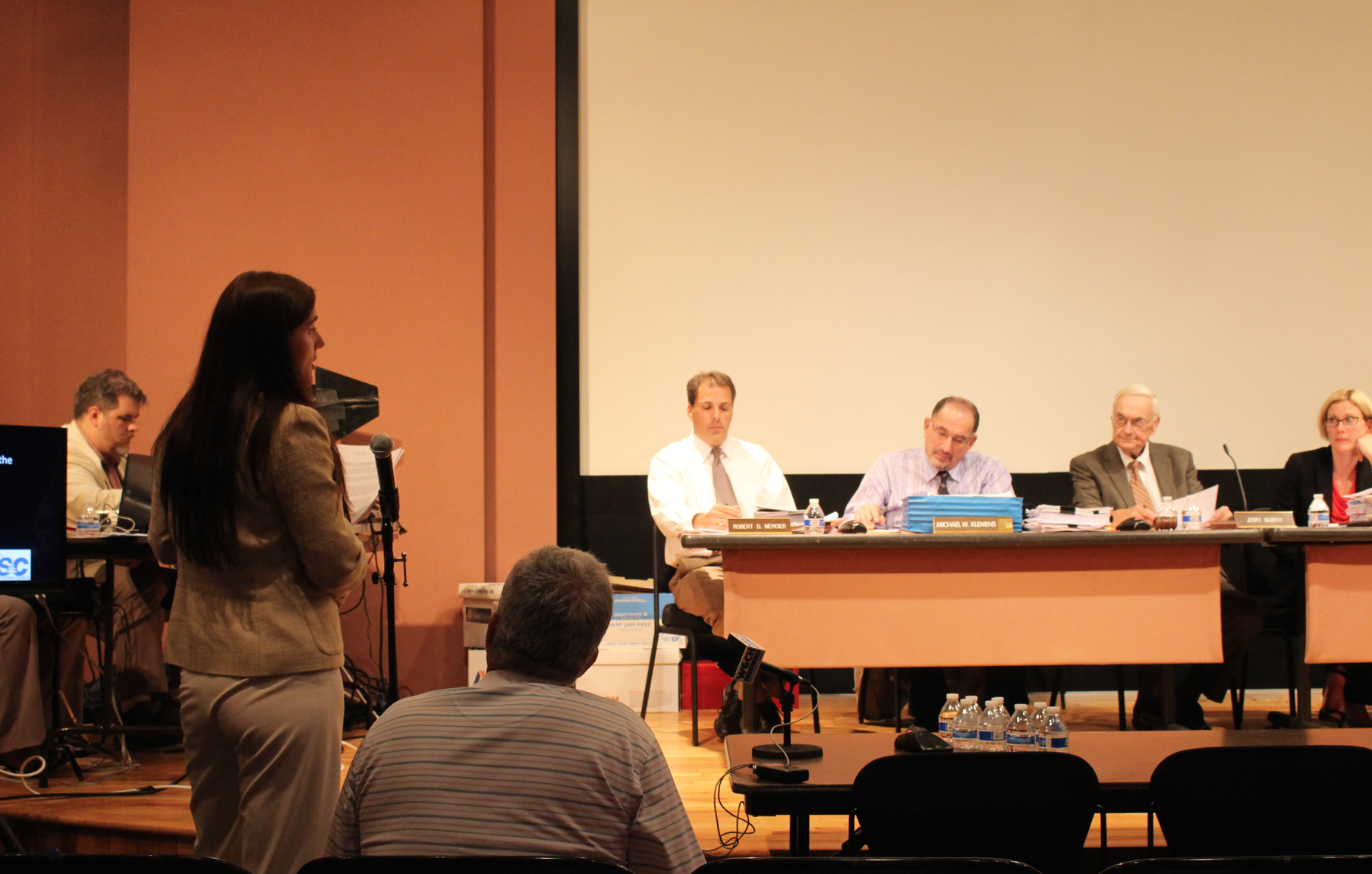 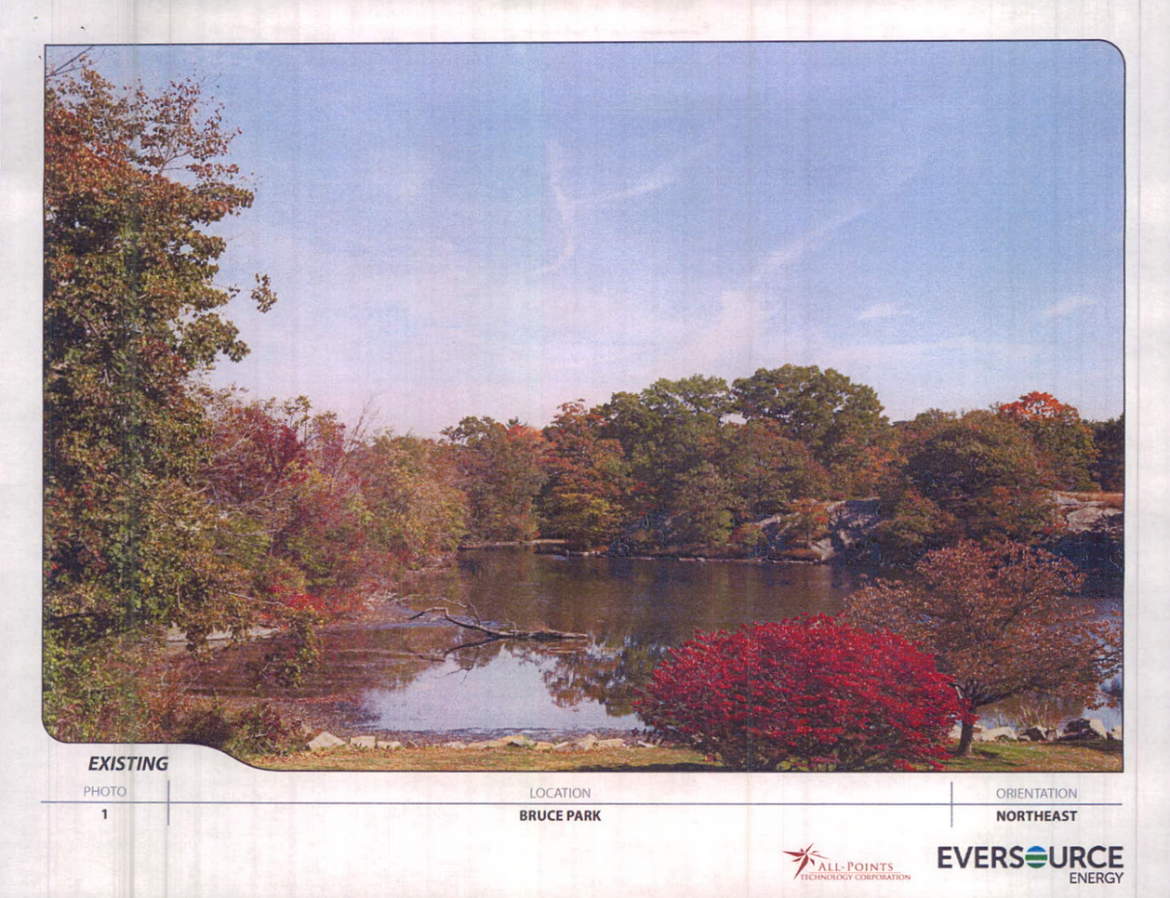 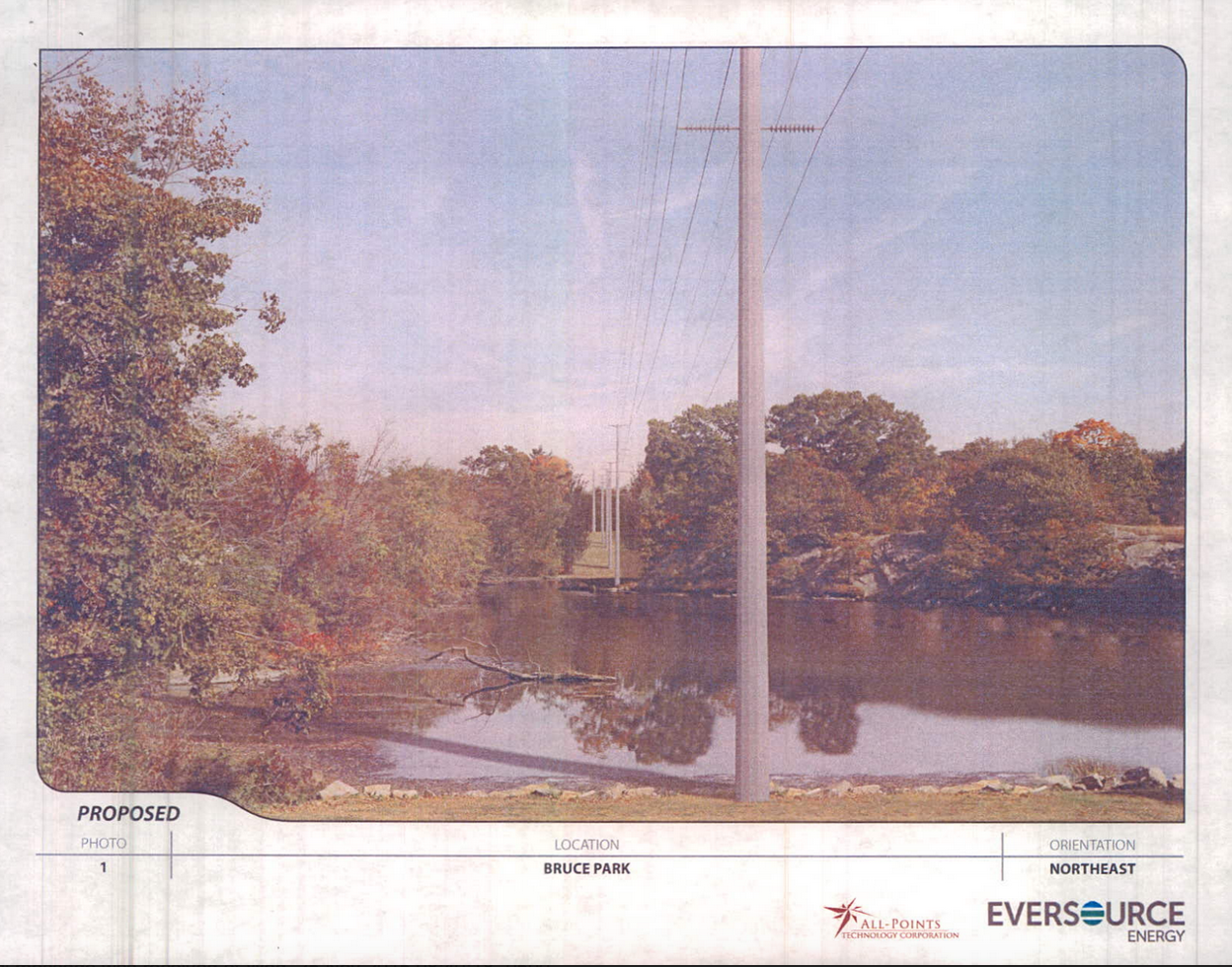 DeLuca elaborates on a host of concerns about the environment, and impact on Bruce Park. 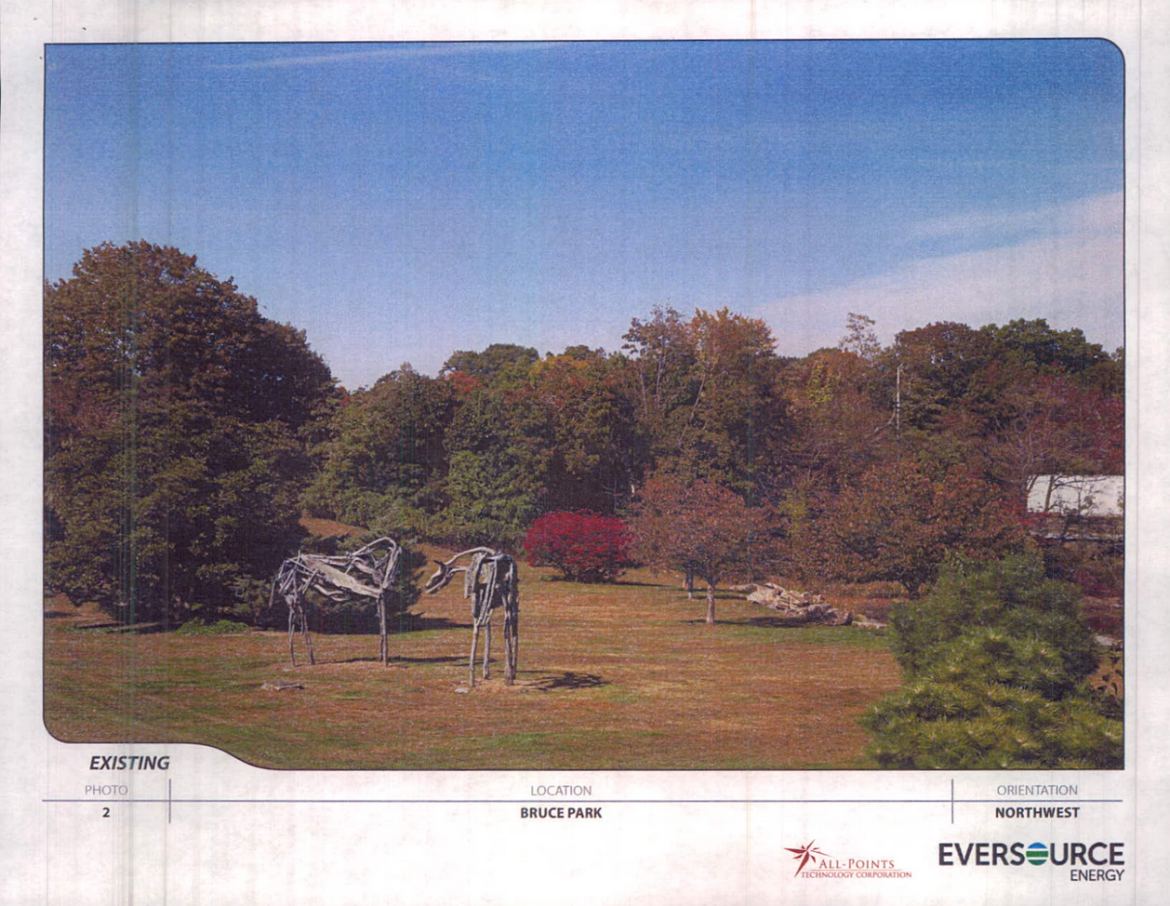 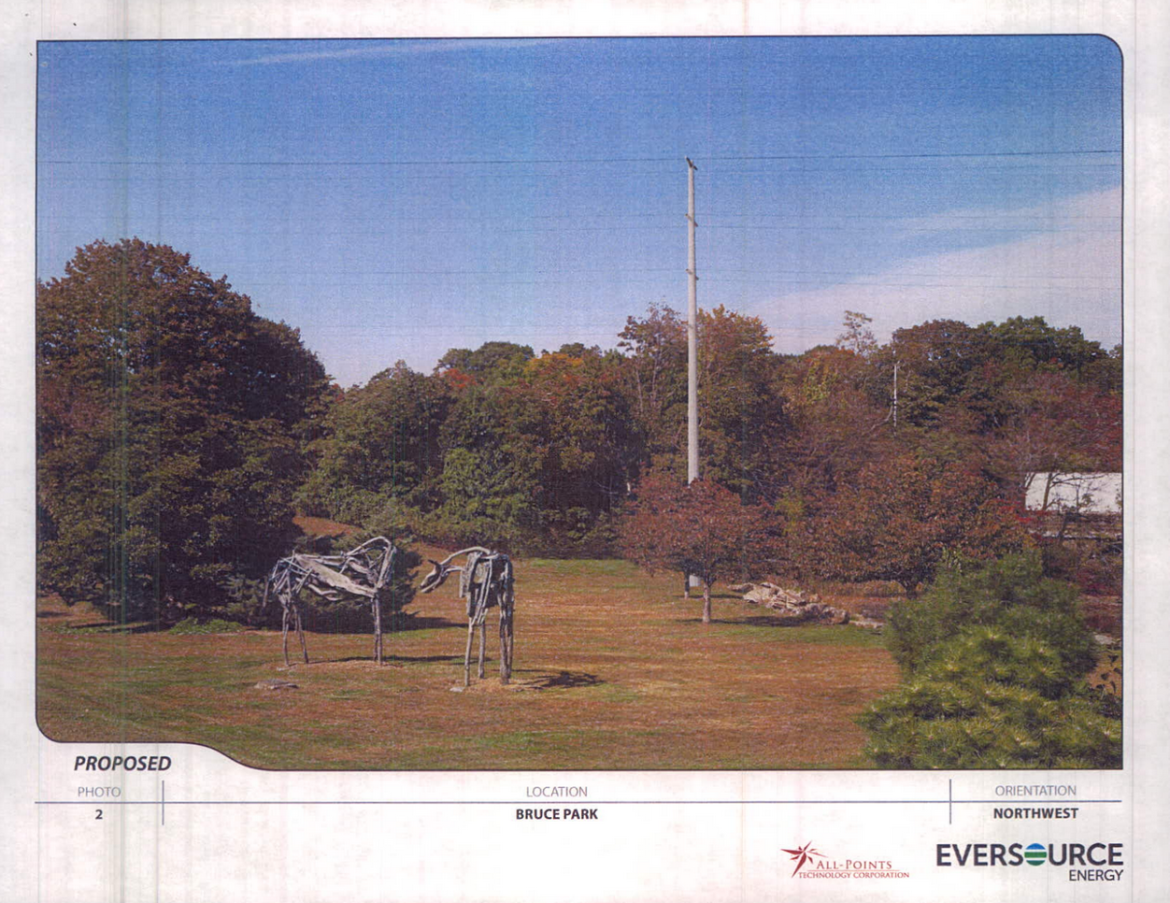