Correction: This article has been updated to reflect that the Connecticut Siting Council is comprised of nine members, not five as originally published.

The utility company scheduled the additional open house as a courtesy because the first one, back in March, coincided with a snow storm.

Although the Architectural Review Committee (ARC) bristled with criticism over the proposed substation aesthetics during their meeting in the Cone Room, downstairs in the Town Hall meeting room residents asked good questions and everyone was civil.

The proposal is now in the hands of the Connecticut Siting Council.

According to Peter Tesei, the nine-member Siting Council is planning a public hearing in early September, tentatively in the Cole Auditorium at Greenwich Library.

“That is the most important meeting for people who have issues with the project because that is the adjudicating body that will make the determination. That’s where you want to direct your comments, concerns and questions,” Tesei said. 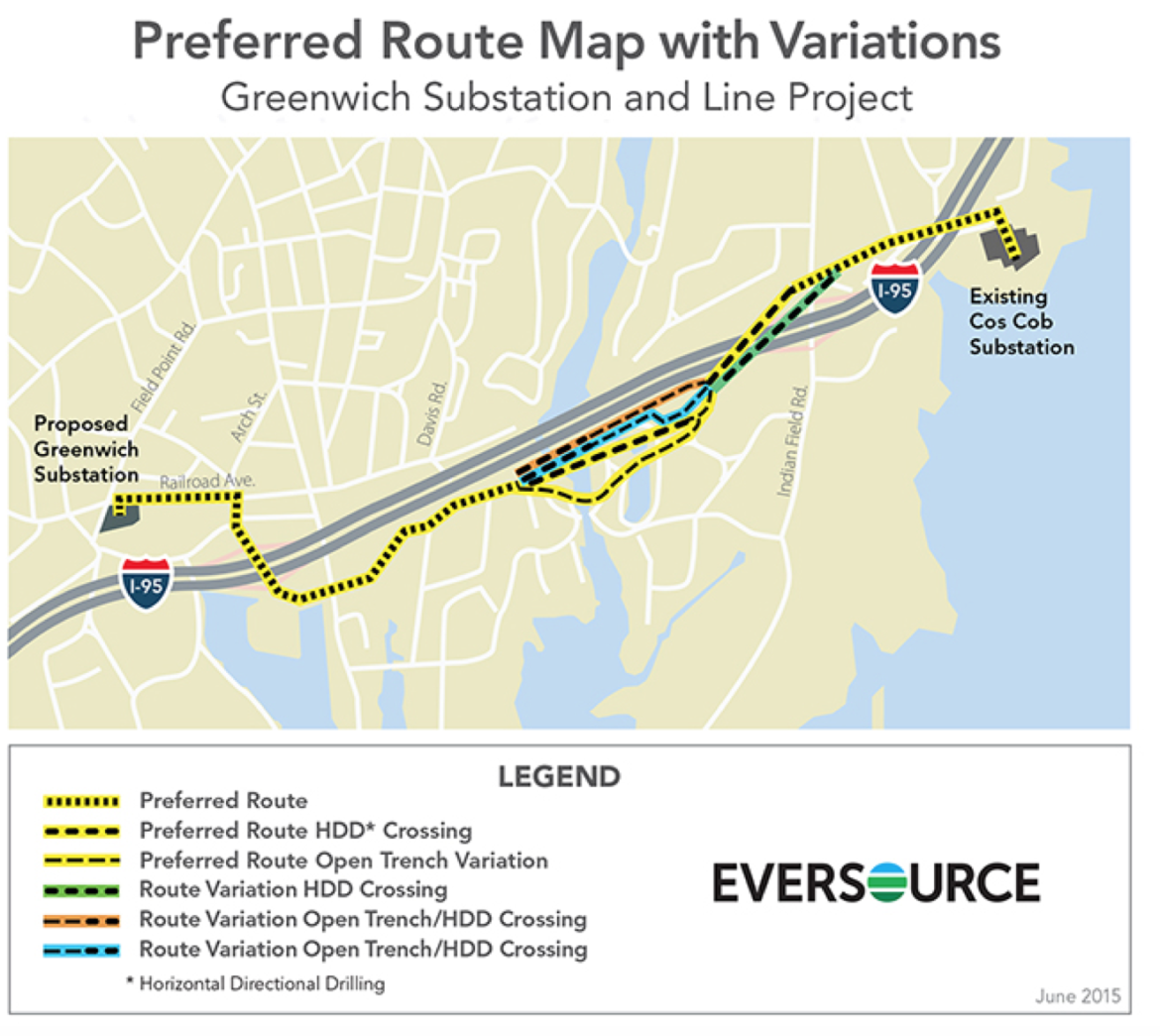 The first selectman said he and several Town department heads had met in the field with representatives of Eversource on Wednesday. He said they’d learned about the alternate routes and techniques for the lines project, including trenching vs HDD (Long Distance Horizontal Drilling).

“At least Eversource has been amenable to our comments that we’d like them to avoid certain areas,” Tesei said on Friday.

Residents interested in commenting on the proposed Greenwich substation should direct comments to [email protected] or call 800-793-2202.​

Some fun facts about the project emerged on Wednesday night.

Work on the new 2.3 miles of transmission lines connecting the new sub station to Cos Cob will be timed with the goal of minimizing impacts to neighborhoods.

The proposed route from Cos Cob will come through Bruce Park, along Arch Street and around to Railroad Ave, though, the utility has yet to finalize the route through the park. 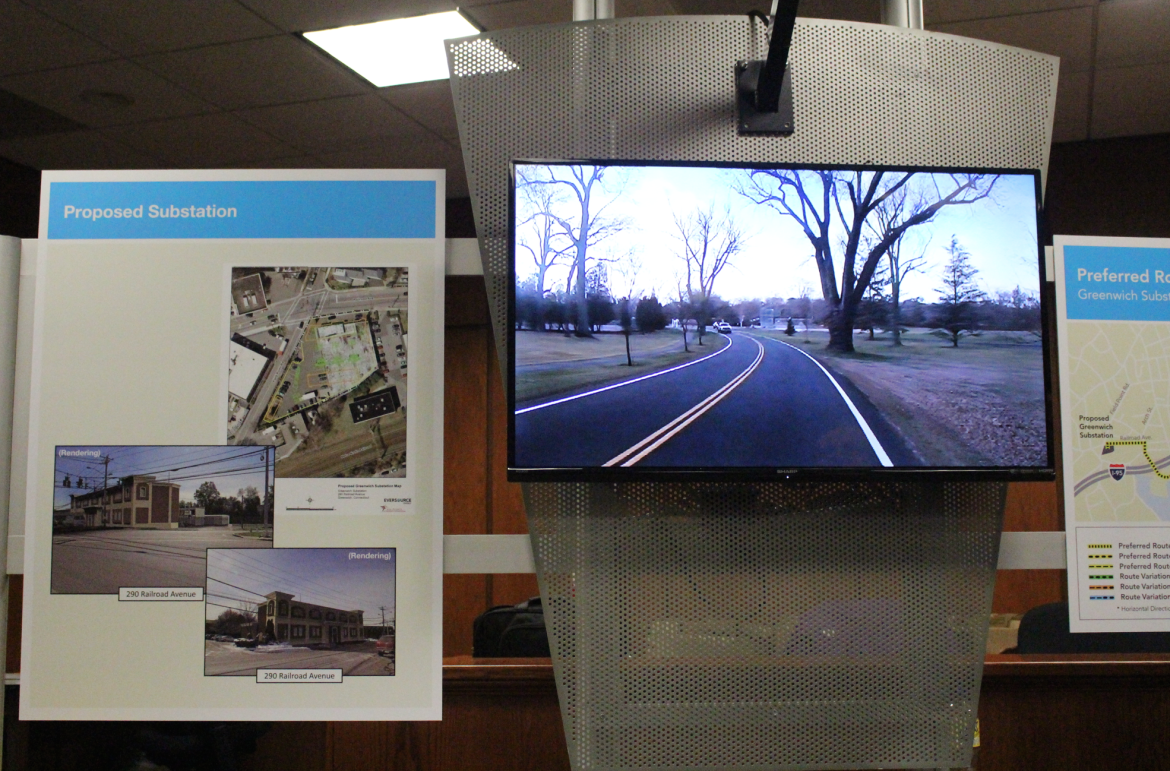 Work on Arch Street and Railroad Ave will be done at night. “That’s got to be night work,” said Marcia Wellman of Eversource. “We can’t hinder access to the railroad station or the plaza. The work gets plated during whatever our off hours are.”

Wellman said that although the route for the 2.3 miles of transmission lines is not finalized, Eversource would propose work hours tailored to each portion of the route. For example, she said that in Bruce Park, “depending on the route, if we’re able to move to the back of the park, I expect we’d get longer hours than if we’re right up alongside Bruce Park Drive.” 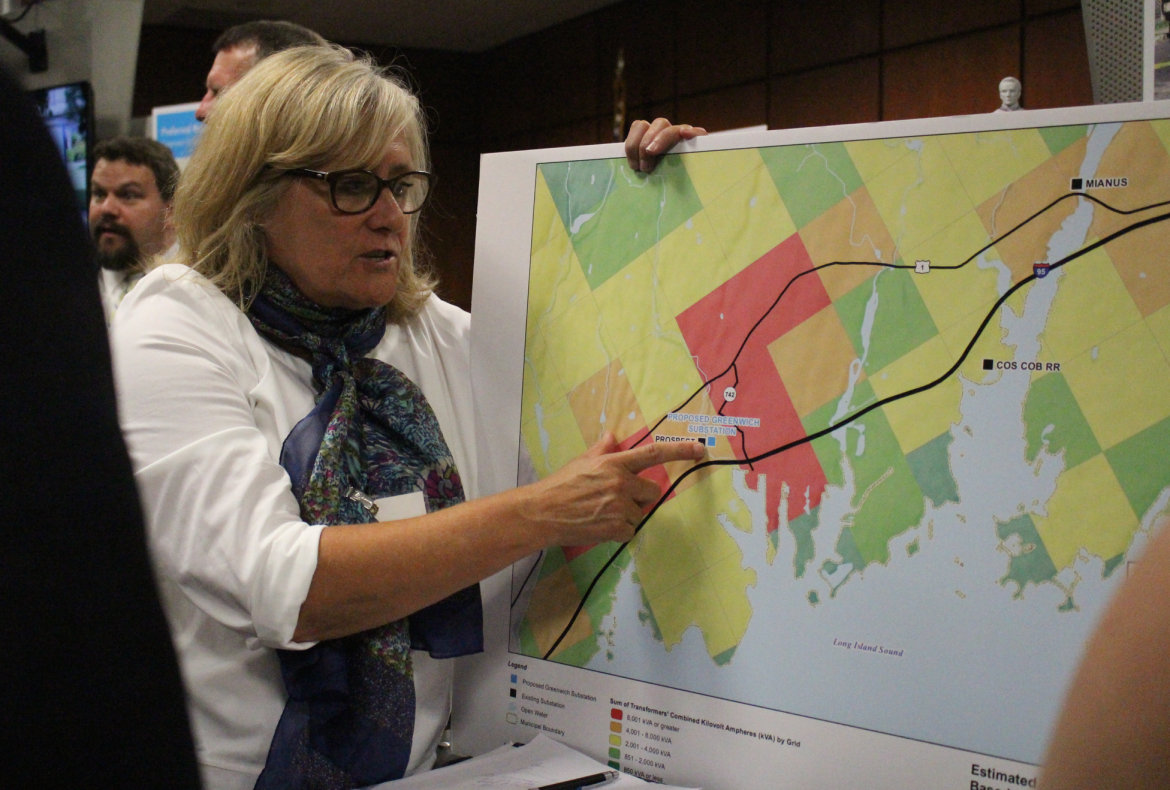 Marcia Wellman explained the challenges of putting down transmission lines without impacting residential neighborhoods or curtailing the major transportation hub formed by the train station and I95 exit 3 hub. Credit: Leslie Yager

Asked by a resident why Eversource settled firmly on the 290 Railroad Ave location, Wellman said, “You draw a line around where you need to be to meet the major power source.” From there, she said the utility seeks to avoid wetlands, watercourses, and flood planes. She said Eversource seeks to avoid having to obtain easements to get down the private roads.

A key plus to the 290 Railroad Ave location is that no residential properties abut the site.

“We have other sub stations in residential neighborhoods,” Wellman said, adding that in fact, “We have them all across Connecticut. But when you have a chance to not do that, it’s better for community relations.”

The proposed enclosed substation would be a “Gas Insulated substation” or “GIS.” That means the transmission lines come in and gas cools the equipment, versus open air.

Wellman said Eversource is proposing an enclosed building for its new substation, as opposed to an “open air substation,” because there simply isn’t enough land in downtown Greenwich for an open air sub station. “There’s not a lot of open air sites that aren’t surrounded by residential properties.”

As for the transmission lines connecting 290 Railroad Ave to Cos Cob, Wellman explained that Eversource can’t locate the lines parallel to the train tracks. “It’s not a very wide situation there,” she said, adding that doing so would impact a number of private properties.

“Particularly in the Circle Drive area, where there is the railroad in their back yards and we’d have to clear a lot of vegetation that gives a maximum amount of buffer,” Wellman explained.

At the first open house, Frank Poirot, Eversource spokesman explained the trenching process for burying the 2.3 miles of transmission lines. He said the project involves trenching to a depth of about 6 ft, and in older towns such as Greenwich, the utility company anticipates various contingencies for contaminated soil.

Mr. Poirot said that any soil that is suspected is taken out of the trench, put in lined dumpsters and taken to a licensed facility to be processed.  After dirt is removed, the trenches are filled with a weak concrete mixture that doesn’t settle. Mr. Poirot explained that the mixture prevents “cupping.” 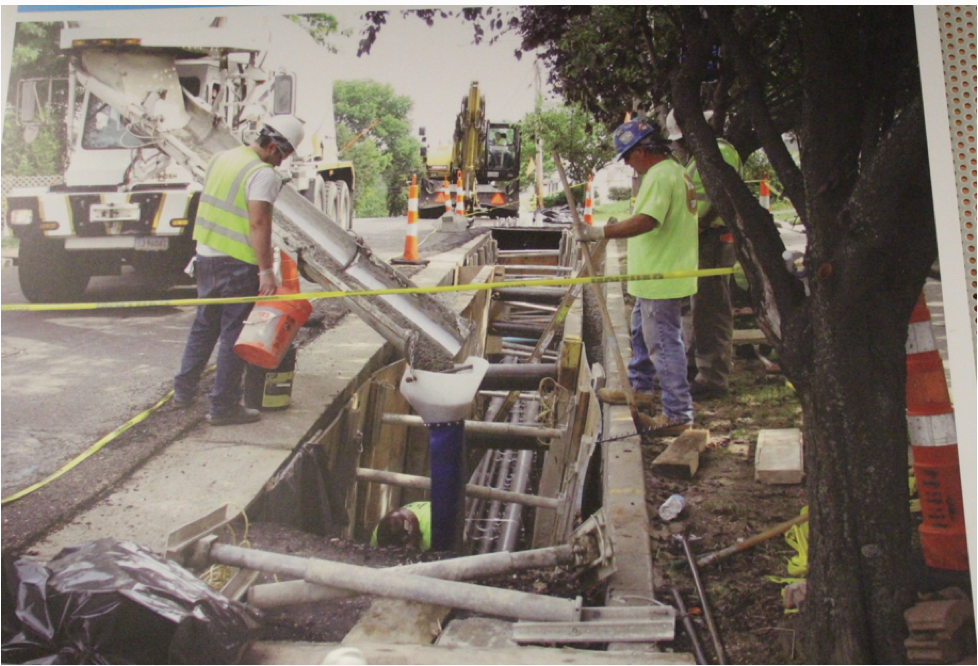 Workers laying transmission lines in trenches under a sidewalk. Workers are pouring a weak mixture of concrete into the trench in order to protect the lines. “If we had our druthers we’d go along the side of streets, but that’s not always possible. There’s about 100 ft open at any one time. About every 2,000 ft we put in a splicing vault,”said Frank Poirot an Eversource spokesman. A splicing vault is a concrete enclosure buried in the street and used to house the connections (splices) of an insulated under-street cable. Generally 8 ft high, 8 ft wide and 28 ft long. When the cables are spliced together during the installation phase, a controlled atmosphere is created by an enclosure or vehicle over the manhole. These vaults must be accessible at all times for maintenance purposes. 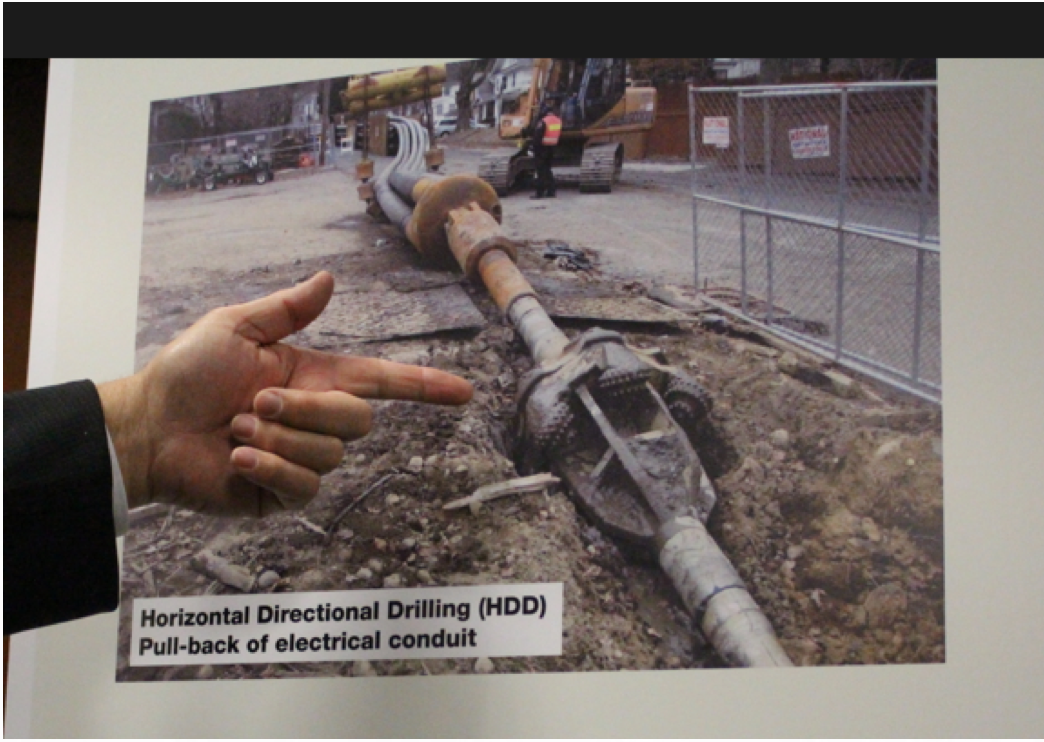 “I’ve seen a drill a mile under a lake come out the other side. They can go great distances under the ground. Part of this involves a HDD 1,400 ft long,” Novak said, adding that the downside is the process is very expensive and therefore done in a situation that warrants it. For example, he explained the method would be used to run a line under water.

With the aid of GPS, drills correct themselves if they go off course. It starts with a pilot hole and then a drill cuts a bigger hole as it goes through. “Hopefully you do it just once and thread the line through,” he said, adding that all the lines are set up on platforms on saw horses.

Residents interested in commenting on the proposed Greenwich substation should  comments to director call 800-793-2202.​ or email [email protected]

To get more information on the Greewnich Substation and Line Project click here: Eversource.