On Tuesday night an application from Étourdissant LLC for a Final Coastal Site Plan to use a 25,000 sq ft portion of a 50,000 sq ft warehouse at 50 Chestnut Street in Byram to store exotic, antique and collector cars went before the Greenwich Planning & Zoning Commission.

Present were commissioners Macri, Fox, Alban, Maitland, and, sitting in for Peter Levy, was alternate Victoria Goss. Also, Mr. Yeskey was not present.

According to the CT Secretary of State’s office, Étourdissant LLC, business ID 1251486, is registered to Sam Klein, whose business and residential address are both listed as 50 Chestnut Street in Greenwich.

Representing the applicant was attorney John Tesei, who made clear the business was not a car dealership but rather a car storage facility geared toward “very high end automobiles.”

Tesei said that in addition to storing cars, the business, which would employ 5-6 employees to shuffle the cars from their stacked storage decks to their owners would also offer detailing. He said the business will also provide a “high end”  lounge area of about 1,000 sq ft.

Tesei also said the cars will be be driven in by owners, though occasionally they would be transported on a flatbed trailer, one at a time, but that there would be no multiple car tractor trailers.

“I’d be worried a tractor trailer driving off the exit onto the street and cars being shuttled back,” said commissioner Nick Macri.

Tesei said his client was amenable to all the stipulations of the settlement made in court between the ZBA and the applicant, including the limit of 296 cars, that  access to the building be exclusively from Byram Road (not Chestnut Street), that no more than an average of 50 cars leave the property per day computed on an annual basis, with a cap of no more than 65 cars leaving the property on a single day, and that cars exiting onto Byram Rd only turn right.

The commissioners pointed out that as far as the applicant’s traffic studies, there were no comparisons to other car storage facilities.

Asked how his client could comply with the stipulation that no more than 65 cars exit, Tesei said his client would be willing to complete a log. Chair Richard Maitland suggested they submit the log after 6 months and again after six more months. P&Z chair Katie DeLuca asked that that log be available to the Zoning Enforcement Officer to verify after even 5 years.

The commissioners questioned the applicant about their website’s references to a “club” with a private lounge.

Mr. Tesei said members sign a vehicle storage agreement. “That’s the only agreement. When there were references to things like track day and events, those have nothing to do with these premises.”

“Advertising is advertising. Promoting is promoting,” Tesei said. “If someone has a friend they want to take down to see his Bugatti – or Toyota – they have a small lounge area which allows people waiting for their car to get detailed. To say you can’t bring a friend to look at your car is silly.”

The commissioners were very concerned that the lounge could turn into an event venue, perhaps with alcohol.

“We’re making it clear this is not a social club,” Commissioner Alban said.

Alban said since the facility is for vehicle storage only, the commission would like to stipulate that no alcohol shall be served on premises.

“No alcohol shall be served,” Alban said.

“I don’t think you can make that a condition,” Tesei said. “I don’t know if it’s a big deal for the client to have some wine there.”

The commission asked the applicant to agree to a no alcohol condition and a limit on the number of members and guests at any given time.

“The room is the concern,” Katie DeLuca, Director of P&Z said, referring to the lounge. “Because that’s what they’re promoting.”

It was noted that there are other businesses that have an easement to share the driveway that exits to Byram Road.

Tesei said there are several classes of cars that will be stored on site, including collection cars, track cars, and street cars.

Tesei also said his client was not proposing any lighting. “The facility won’t have evening use,” he said. “We propose no changes to the site.”

However, he said, “I assume they’ll want a tasteful sign.” Any signage would need to go before the Architectural Review Committee.

Tesei said his client would indeed prefer a Byram Road address. The commissioners said that process would involve working with the US post office and Greenwich fire department.

In further discussion about limits on the number of members on site and number of guests, Tesei said, “I didn’t want to feel we have to give members a bunch of rules.”

During public testimony, Romulo Samaniego of Ocean View Ave (off Byram Road), who is a member of RTM District 4 said, Byram Rd is dangerous and always heavily trafficked.

“There’s a lot of children in the area. It’s scary going over the railroad bridge. Consideration needs to be made on the safety of the are,” he said, adding that  he felt the ZBA’s original denial should be reconsidered. That was a reference to the April 16th ZBA denial, that triggered legal action by the applicant.  Ultimately Étourdissant settled with the ZBA and court retains jurisdiction over any future disputes of the stipulation of settlement.

Philippa Orszulak of 2 Hartford Ave said her property oversees the proposed site and that she has many safety concerns for pedestrians, especially school children. She said that on Frontage Road and Byram Road there is speeding and long lines of cars.

She described the Byram Rd driveway as vertical, and said that in winter the trucks from the existing businesses slide and she can hear their wheels spin.

During public testimony, neighbors brought up the issue of children walking to school or bus stops. It was pointed out that there are no sidewalks in the area of the proposed Byram Rd exit or the narrow railroad bridge.

Lucy von Brachel who lives on High Street, which is off Byram Rd, said the Town has published multiple reports indicating that Byram Road is hazardous, including the 2003 Byram Neighborhood Enhancement Plan, 2007 Byram Comprehensive Plan, 2009 First Selectman’s Pedestrian Advisory Committee’s report where Byram Rd got a priority and need determination score of 100%, the 2009 POCD Implementation Summary, the 2009 POCD, the 2011 Byram Comprehensive Plan Update, and the 2012 Town of Greenwich Traffic Safety Study. “They all mention Byram Road,” she said, adding that dating back to at least 2005-2006 there have been plans to improve Frontage Road and its intersection with Byram Rd.

“There’s constant traffic at all times of day,” she said.

“If you’re not looking at the POCD and other plans, that’s not fair to people who have been living there waiting for changes: site distance, narrowness of the road, etc. It’s distressing to hear all you need is someone in a room saying this is fine. We’ve been waiting for help.”

Mr. Maitland said the commissioners can only deal with what is submitted to them, and that the town’s Traffic Operations Coordinator Melissa Evans said the Tighe & Bond traffic report in April “is acceptable.”

“Tighe & Bond says the analysis shows that the trip generation of the existing and proposed land uses on the site are similar, and the site traffic of the proposed use will not have significant impact on surrounding roadway,” Maitland said, adding that the commission’s traffic consultant said the “traffic impact for these potential trips would be minimal.”

“But the Town has eight and counting reports saying there is always a huge problem,” von Brachel said, adding that there are dozens of collisions recorded on  Byram Rd and Frontage Rd.

“I’m concerned that if you’re not looking at the POCD, it’s not fair to the people who live there and have been waiting for promised changes to deal with sight distance, speeding, narrowness of the road, sidewalks… Its distressing to me to think that all you need is someone in a room looking at a report saying, ‘It’s fine.’ We’ve been waiting.”

“I’m concerned that you’re ignoring the reality of the situation of us who live there and have to deal with this every day,” von Brachel said. “We’re residents and tax payers.”

Patricia Kantorski said that the building  at 50 Chestnut would have never been built with today’s regulations and that she was concerned about noise.

“These type of cars tend to have engines that have been revved up. I hear them on the highway and stopped at a red lights and then when they’re idling. They’re loud,” she said.

The commissioners disagreed with Mrs. Kantorski, saying that the site is actually large enough to accommodate a second facility of equal square footage.

Joe Kantorski said he was also concerned about noise and asked about the alarm system for the cars worth millions of dollars. He was assured there would be a silent alarm system connected to the police department.

After public testimony, Ms. Alban reviewed the conditions agreed on during discussion, including: a maximum of 12 guests on site at any time, no backing out of the driveway, external access via Chestnut Street will be blocked, applicant will attempt to change the business address to Byram Road, keeping a log on the number of cars in and out after six months and again after 12 months, that the hours of operation be 8:30 to 6:30 (instead of 8:00am to 6:00pm) Monday to Friday and by appointment 9:00-5:00pm on weekends April through October, no trucks in excess of SU30, no events for vehicle display, no social events, the site shall be used by contractual storage users with occasional small number of guets with no more than 12 guests on site at any time, no club use, no alcohol served, any change in lighting or signage shall go before ARC, and applicant will work with the Highway Dept to configure the exit to discourage left turns.

Tesei said it would be standard to work with the Sewer Dept on maximum flows as far as the detailing service.

Commissioner Macri requested the application remain open, which meant that the commissioners would not take a vote. Mr. Maitland agreed.

Mr. Tesei expressed surprise, saying he felt he had addressed all the neighbors’ concerns and answered everyone’s questions.

Mr. Macri repeated that he wanted the applicant to return with data on other car storage facilities.

Mr. Tesei said the members generally don’t like other people driving their cars. He said they would likely use an app to contact the facility to have the car ready to pick up. “People don’t like to wait, they’ll call ahead of time.”

He added that most people would come drop off and pick up their car versus having them moved on flatbed trucks, which would be relevant when they are being moved form another storage facility.

He also said the applicant would not own their own flatbeds, but would contract for them.

“I’d like some more information about the other sites that are  typical to this – that the property owner has. Their typical use day-to-day in terms of client access. Is it more clients showing up to get their cars, or is it more clients and having the cars delivered to their home?”

The application was left open. Mr. Tesei asked if it could be on the agenda at the next meeting. Ms. DeLuca said that would be possible. 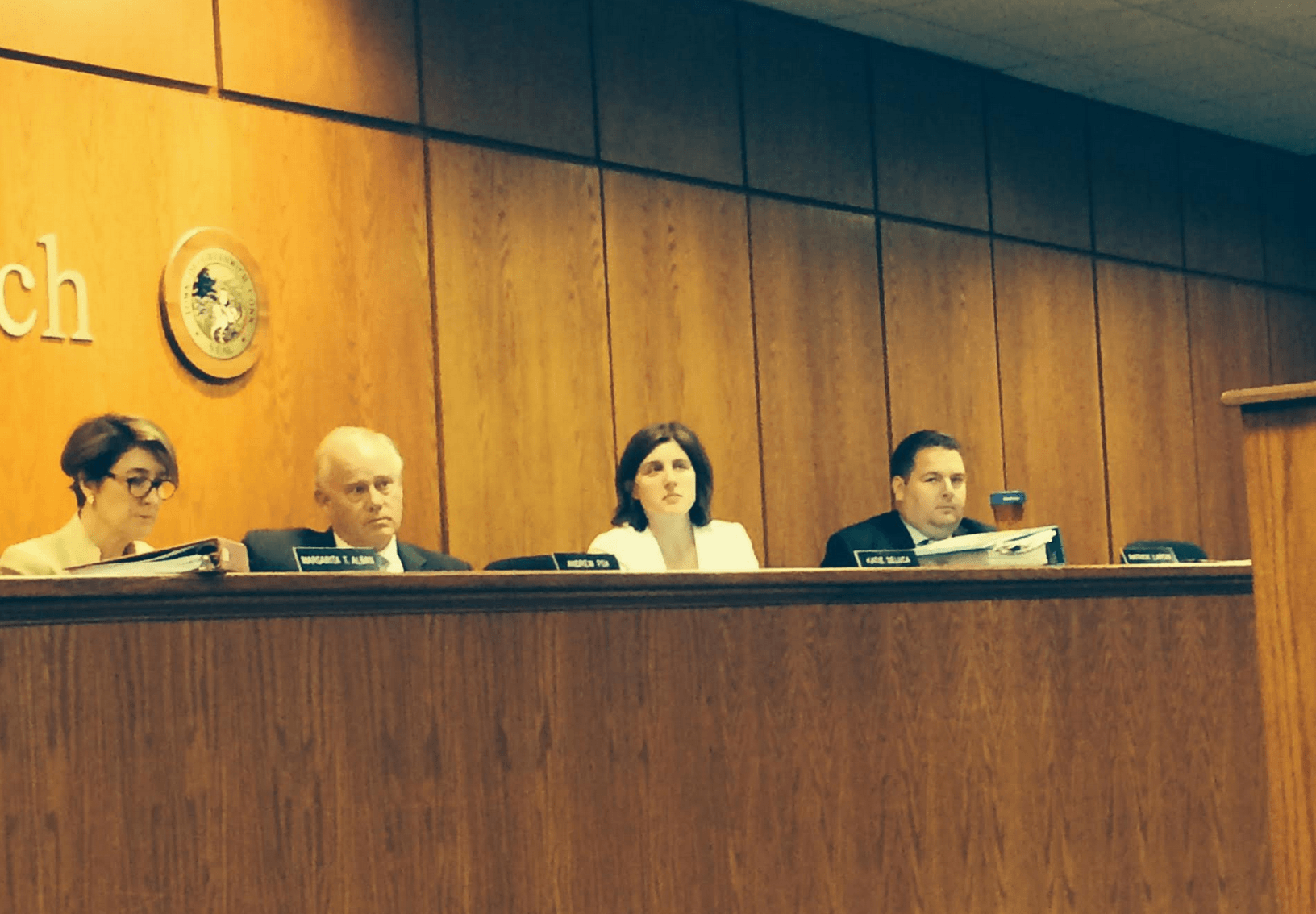