Acting Tree Warden Steve Gospodinoff held a tree hearing at Greenwich Town Hall on Thursday on the fate of six mature Pine Trees posted for removal at the request of Pecora Bros, who are developing a housing complex between Hamilton Avenue School and the Two Door Restaurant.

The Pecoras seek to remove the mature Pines on Town property at Hamilton Ave School, and plant 10 Armstrong Maple Trees.

The Pines were posted with notices on March 15 and include five Black Pines 13” 16″ 17″ and 18” in diameter, and one Colorado Blue Spruce with a 12” diameter, which is measured at breast height. 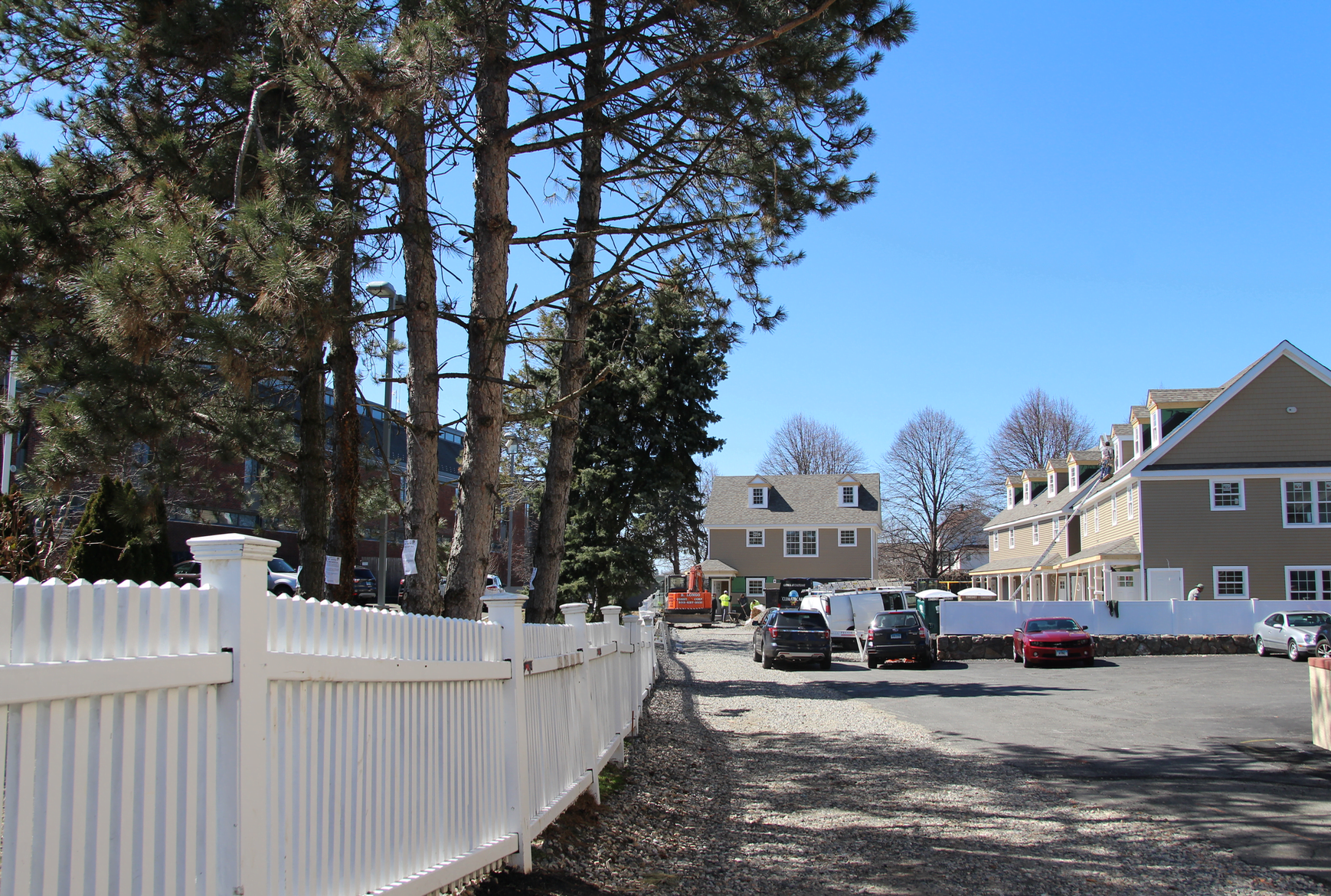 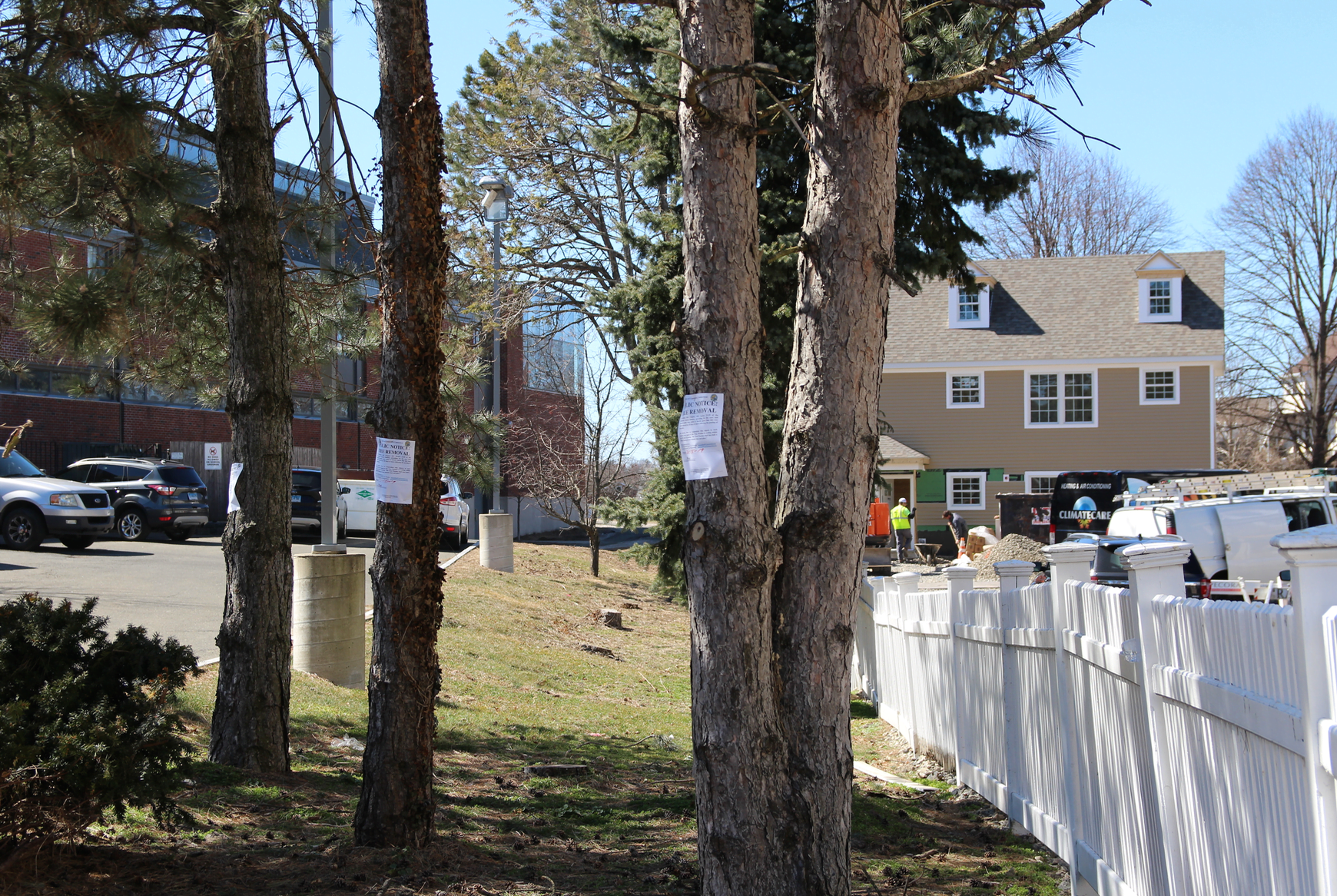 Acting Tree Warden said he had inspected the trees and that they are healthy.

“I don’t see anything that predisposes them for failure at this time,” Gospodinoff said adding that he checked the root flare, structure of the trees, and looked for decay or damage, but found none.

As per state statute because there were written objections, a public hearing was triggered.

Gospodinoff read aloud several letters and emails he had received objecting to the removal of the mature trees, including one from Schools Facilities Director Mr. Watson.

“In future the board’s Facilities Dept should be notified in writing when it is requested a tree be removed from Town property at a public school,” Watson wrote.

Watson said that last fall a row of tall arbor vitae were removed by the Tree Dept which is part of Parks & Rec, from Hamilton Avenue School before he had time to act.

“There should have been serious notification between the Parks Department and the school,” said.

“If it’s a screening issue, that is our issue, not Parks,” Watson added. “We were never notified what would be installed, how many, or who was installing, which is another issue.”

Also, Watson said Greenwich Schools were never notified about a contractor or whether they had proper insurance or vetting.

“These are all Town of Greenwich requirements, not just the Board of Education. As far as the new trees being posted we heard PTA and administration concerns. They provided a natural boundary and shade. It’s unfortunate the screening trees were taken down and the new property is right there.” 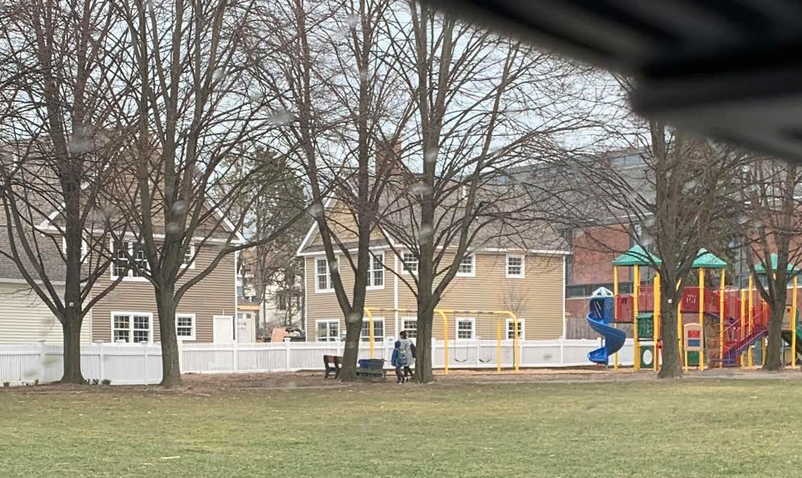 The playground at Hamilton Avenue School is only separated from the new Pecora development by the white picket fence originally paid for by Rene Anselmo. Gone is a row of tall, mature arbor vitae. Contributed photo

“We are strongly opposed to the trees being posted,” Watson added, of the six Pine Trees.

Mr. Gospodinoff said he had believed the mature row of arbor vitae were a safety issue inasmuch as someone could hide behind or in them and be a threat to children.

Mrs. Fiorito-Brunetti said, on the contrary, the trees had kept prying eyes off children and provided much needed screening to the playground.

Greenwich Schools Superintendent Ralph Mayo called it a sin the trees were removed.

“I’m not happy those trees are down,” he said. “We didn’t think it was a safety issue.”

Mayo said several people had written letters objecting to the removals and the letters and emails were somehow either lost of misfiled.

The Superintendent said the health and safety of students of the school is paramount.

“Now there is no barrier between the school and the apartments that went up,” he said. “We want those trees.”

Mr. Gospodinoff said, “I felt they were a place where someone with ill intent to watch or grab children, but learning from this meeting, I’ll confirm with Mr. Watson and the Board of Education before any other work is done.”

Mayo also complained that in addition to losing that barrier that dust and dirt from the Pecora Bros demolition of the two houses had blown onto Hamilton Ave School property.

“One was a big drug house. When we brought the property the residents were arrested and we evicted them,” he said, adding that his workers did their best to hose down the debris during demolition.

Pecora said he has 10 Armstrong Maple Trees with a 3-1/2 caliper on hold at a nursery.

“They’re not even green except at the top,” Pecora said of the Pines he wants cut down. “I don’t see the beauty.”

Greenwich resident David Wold testified that he couldn’t understand why a private contractor would ask to plant on Town property.

Pecora said he had worked with the Town in the past, and, for example, planted trees on Town property on Bible Street.

“But it’s to enhance your own property, next to your own developments. Correct?” Wold pressed.

Mr. Watson pointed out it would probably take 10-15 years for the new trees to mature enough to provide shade equal to the existing trees.

JoAnn Messina of the Greenwich Tree Conservancy said, “Gifting the Town trees is not something you can not do without going through RTM unless you go through the Tree Conservancy.”

The Tree Conservancy has a public-private partnership toward that end and have planted over 3,500 trees in 10 years with the Town, including trees on school grounds.

“We’ve always said if a tree is doing well we don’t take them down,” Messina said. “We don’t want to get into a situation where because of a private development we’re taking down public trees.”

“We can only replace trees by going through a donation process,” she said, adding that she has been in talks with Mr. Gospodinoff about adding trees at Hamilton Avenue School and will contact Mr. Watson.

Francia Alvarez of the Greenwich Tree Conservancy said it is critical to protect the Town’s tree canopy.

“We all know what is going on with Dept of Transportation. We’ve lost a tremendous amount of trees along I95 and the railroad tracks, to the detriment of the Town, adding more pollution and noise pollution. WESTCOG reported in 2015 we have less canopy than Stamford. That doesn’t even include the trees lost along the transportation corridor.”

To Mr. Pecora’s comment that the trees are only green on top, Dr. Kramer the incoming Tree Warden said there are two types of Pine Trees – hard and soft.

“Hard Pines, like these, as they grow it’s a natural progression to have a high canopy and be bare on the bottom,” he said.

Robert Roina who owns the Two Door next door to the school said Rene Anselmo paid for the trees and left a fund to maintain them along with the picket fences at many public schools including Hamilton Avenue School.

“Rene put the trees in too,” Roina said. “He’d probably not be happy for them to come down.”

“Only God can make a tree,” Roina added.

The acting Tree Warden will announce a decision on the fate of the trees in three business days.