On Thursday Dr. Greg Kramer, Greenwich’s Superintendent of Parks & Trees and Tree Warden, held a public hearing on the fate of five trees posted for removal in different parts of town.

The proposed removal of a 50-inch caliper White Oak at 15 Sunshine Ave, and two others at 19 Sunshine, near ISD, drew multiple objections from neighbors.

The Dept of Public Works and the First Selectman’s Committee for People with Disabilities requested removal of the trees.

James Michel, Deputy Commissioner of Public Works, said, “(The request) came as part of the sidewalk replacement project we were doing along Sunshine Ave.”

But neighbors quickly pointed out the sidewalks were done before the trees were posted for removal.

The sidewalks are asphalt and are lined with granite curbs.

“We don’t have enough space to fit both the sidewalk and the tree,” Mr. Michel explained. “The tree roots are coming through the sidewalk. We have 21 inches (wide sidewalk) and need at least 32 inches.”

“Moms who push strollers or walking a small child hand-in-hand, you take up more space than 32 inches,” Mr. Michel said.

Alan Gunzburg, Chairman of the First Selectman’s Advisory Committee for People with Disabilities, said the sidewalk was not built for everyone.

“It goes against the ADA, which is a federal law,” he said. “It doesn’t allow me to use the sidewalk safely with a service animal, or someone in a walker or wheelchair.”

Stefanie Cowie, a paraplegic who uses a wheelchair, agreed with Mr. Gunzburg and Mr. Michel, saying, “These are not ‘nice to haves,’ but required by law.”

Neighbors said they supported people with disabilities, but hoped a compromise could be found.

“Your obligation is to protect these trees. If they do not agree, let them challenge your authority, go to court and spend a few years wasting the town’s money.” – Peter Malkin, Greenwich Tree Conservancy

“This is not the greatest use of tax payer money since we just finished the sidewalks,” said Kevin Sterzinger.

“We have multiple school buildings that are not ADA compliant,” he continued. “If anything should be a priority it should be government buildings.”

“I understand the ADA and compliance issues,” said Jamie Hitel, from Griffith Road which backs up onto Sunshine. “It’s been in existence for 30 years. Why do we consider removing completely healthy trees now?”

As for the sidewalks, she said, “It’s not in the process of being completed. It seems completely ridiculous to complete the sidewalk and then remove the tree.”

Isabelle Abbasi, a Greenwich High School senior, said removing the trees would destroy both its environmental and economic benefits. She said the trees improve air quality and provide a habitat for wildlife.

“Our property is on filled swamp land,” said Martina Doshan of Griffith Rd. “All waters falling on 15 Sunshine cascade into our yard. Their removal will add to flooding in our basement.”

Mr. Michel of DPW said neither property values nor environmental concerns factor into their request.

But, he said, “There might be a creative solution if an engineer like Mr. Michel looked hard for one.”

Mr. Berg noted that DPW had found a solution in a similar situation on Strickland Road near the Cos Cob train station where four trees were marked for cutting.

“He shifted the road to the north by several feet,” Berg said.

“The road is quite wide at this spot,” Berg added, referring to the tree on Sunshine Ave. “It looks wide enough for a car on each side of street, plus two lanes of travel. Is there a way for traffic calming – to take the sidewalk out to roadway and come back in? I know the engineers are infinitely creative in finding ways to avoid cutting down trees.”

Joe Dowling said he uses a wheelchair and served on an ADA committee. His opinion was that arguments about beauty, water and safety were “red herrings.”

But, he said, “I don’t understand why someone was allowed to repair the sidewalk when it violates both the width and grade. To make it even more impossible by installing the hand railing to comply with grade requirements totally violates the width requirement.”

Mr. Dowling said he had fallen out of his wheel chair on West End Ave in a similar situation.

“Nobody should have made this modification to this sidewalk in the first place,” he said. “They should look at a better solution than to arbitrarily to cut down the tree or take an unsafe path.”

Mary Hull, director of Greenwich Green & Clean said, “If you looked at the percentage of streets with sidewalks, it would be small. Many of us walk on the sides of the road and push strollers where there are no sidewalks.”

Hull also said trees are harmed by the installation of granite curbs.

“We have lost many trees to death because of the granite curbing,” she said, adding that not only is granite curbing expensive, but it creates hazards with its sharp edges, including cutting tires.

“Maybe Mr. Michel, we can reconsider the granite curbing that is very hard on our town trees,” she said.

JoAnn Messina, director of the Greenwich Tree Conservancy urged the town to find an alternative solution that would spare the tree.

“There are many roads in town that are not ADA compliant, and we should begin with those that do not have this amazing White Oak, our state tree,” she said.

Francia Alvarez of the Greenwich Tree Conservancy said Mr. Michel’s mention of a minimum of 32″ sidewalk was just 11″ more than what exists.

“That’s a small amount of adjustment in the sidewalk,” she said. “Why not extend it out a little and put a bump-out there. It would be a crime if that tree came down because of 11 inches.”

Susie Baker also pointed to the example of West End Avenue, where pedestrians can cross to the other side of the road.

“Just cross over to the other side,” she said.

Peter Malkin of the Tree Conservancy urged Dr. Kramer to remember his mission.

“You are not controlled by the DPW,” he said. “You have a mission and your mission is the protection of threes, especially unique trees like these.”

Mr. Malkin told Kramer to urge DPW to come up with an alternative solution. 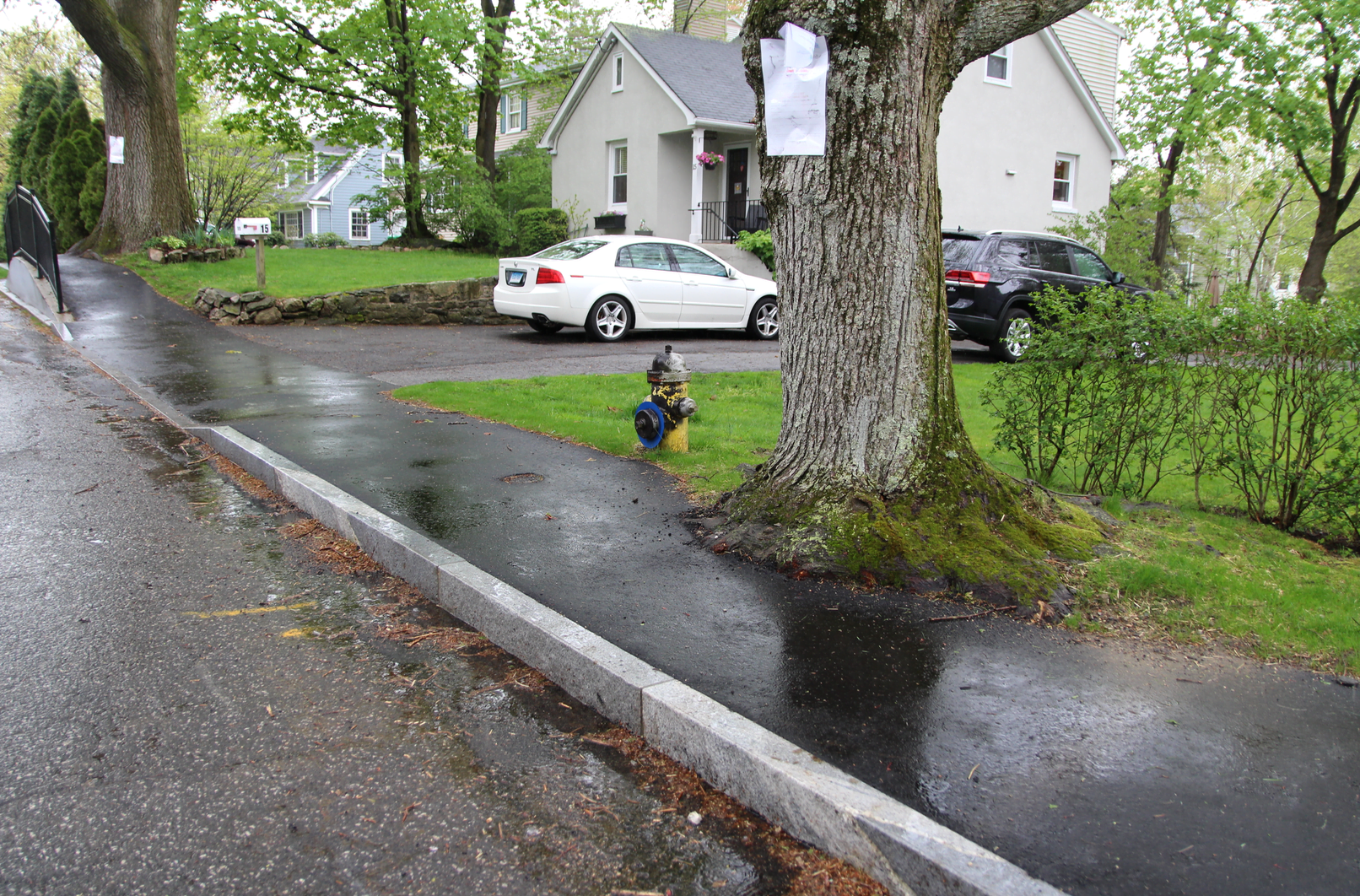 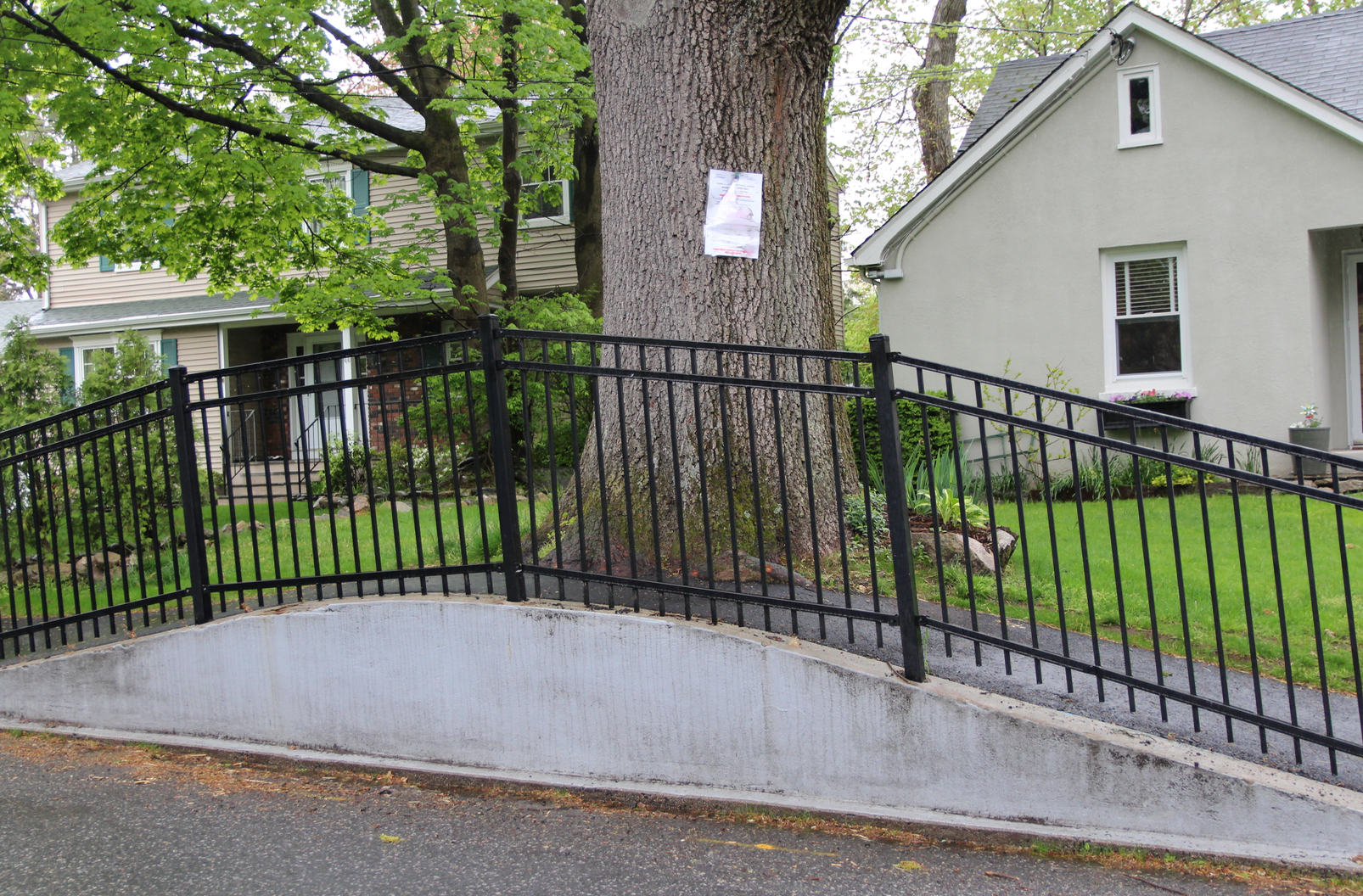 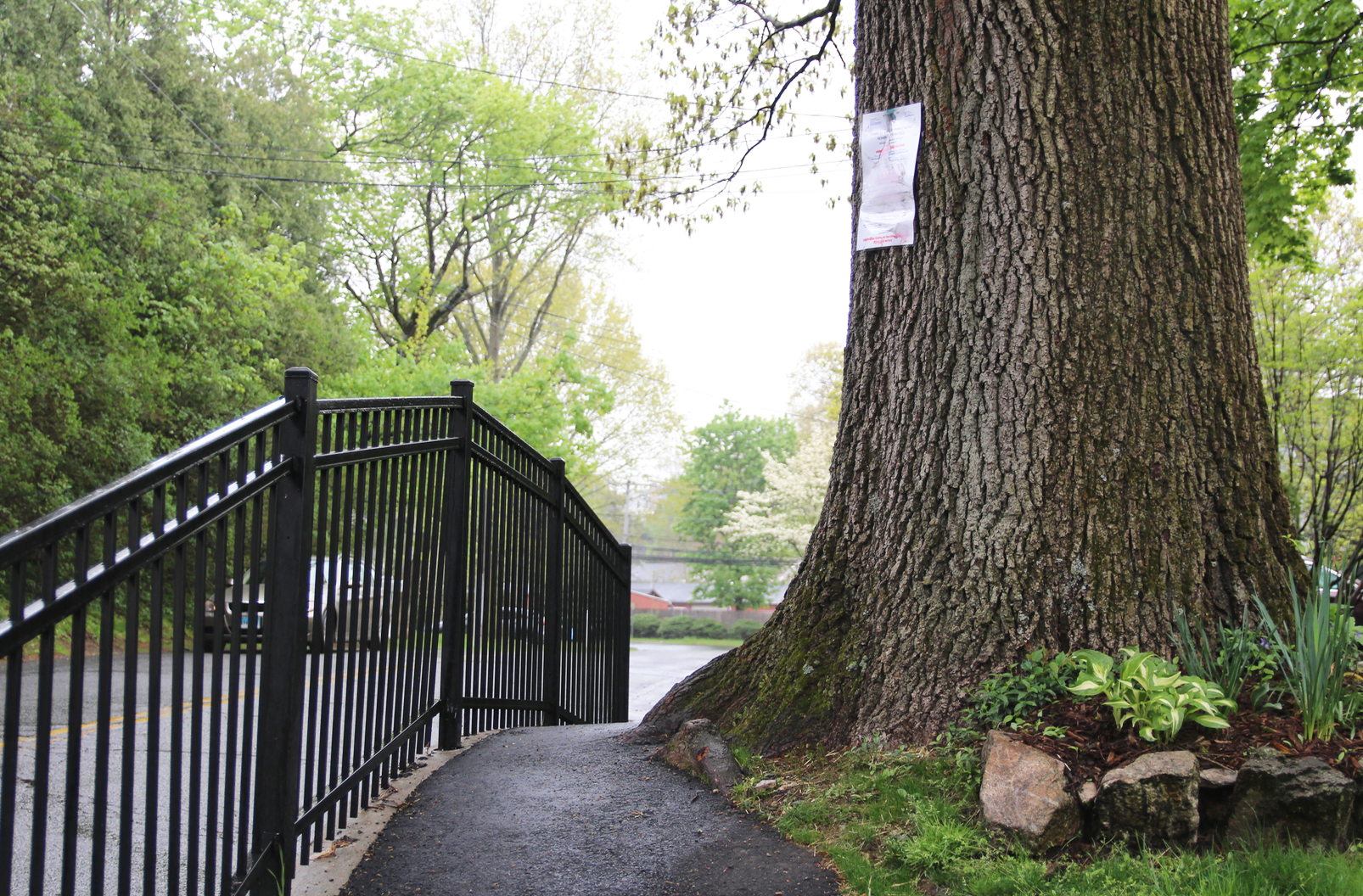 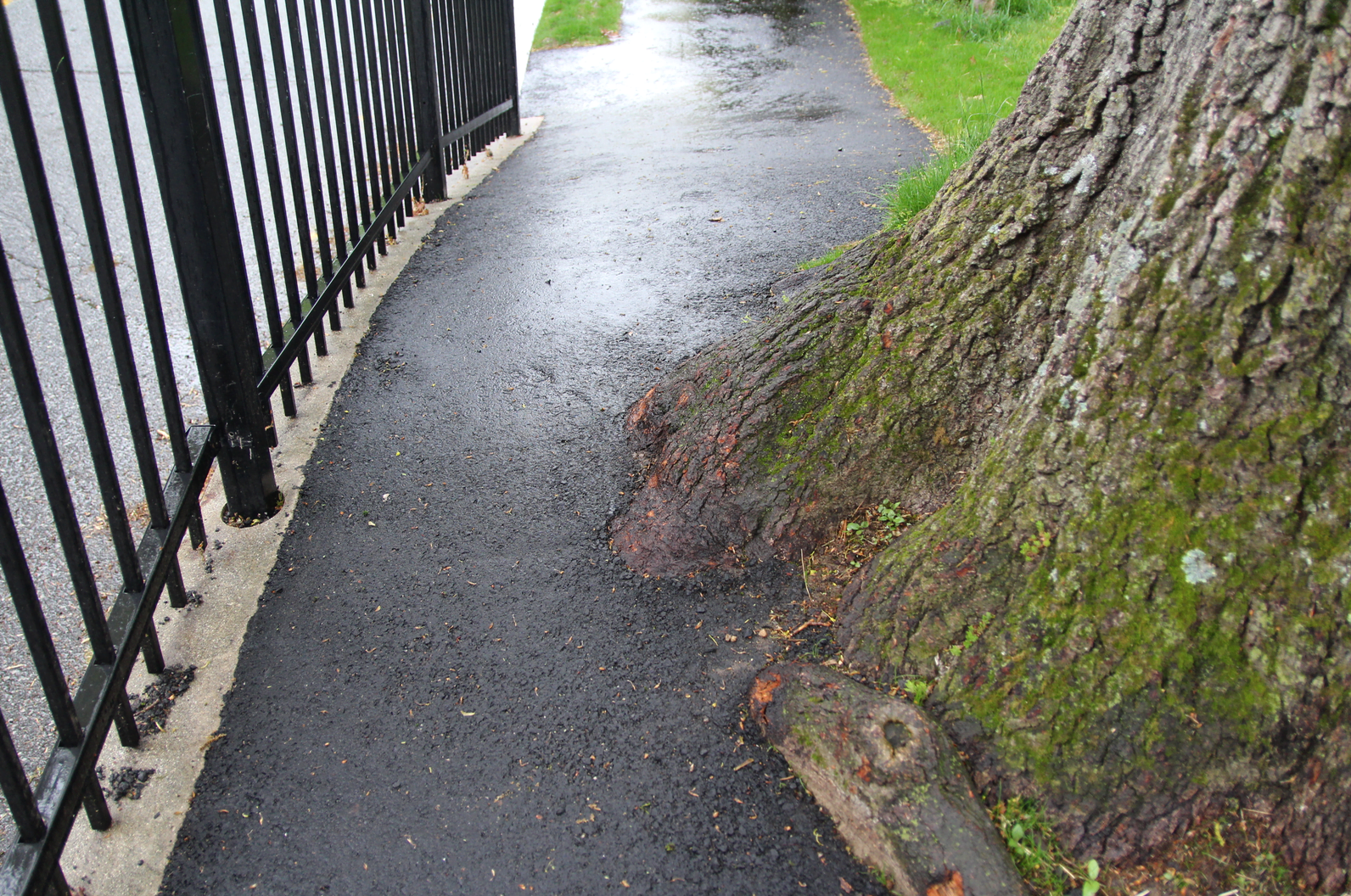 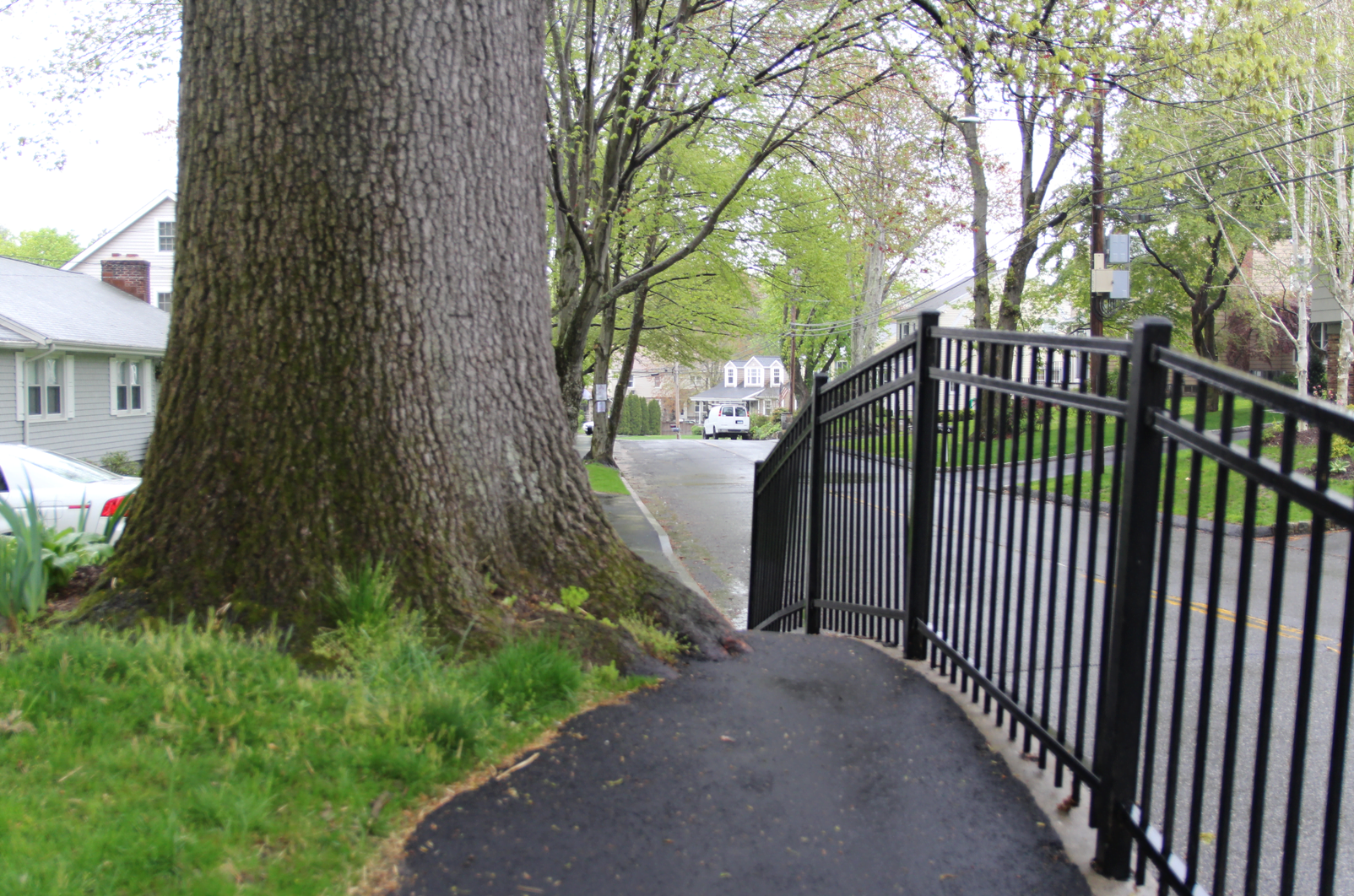 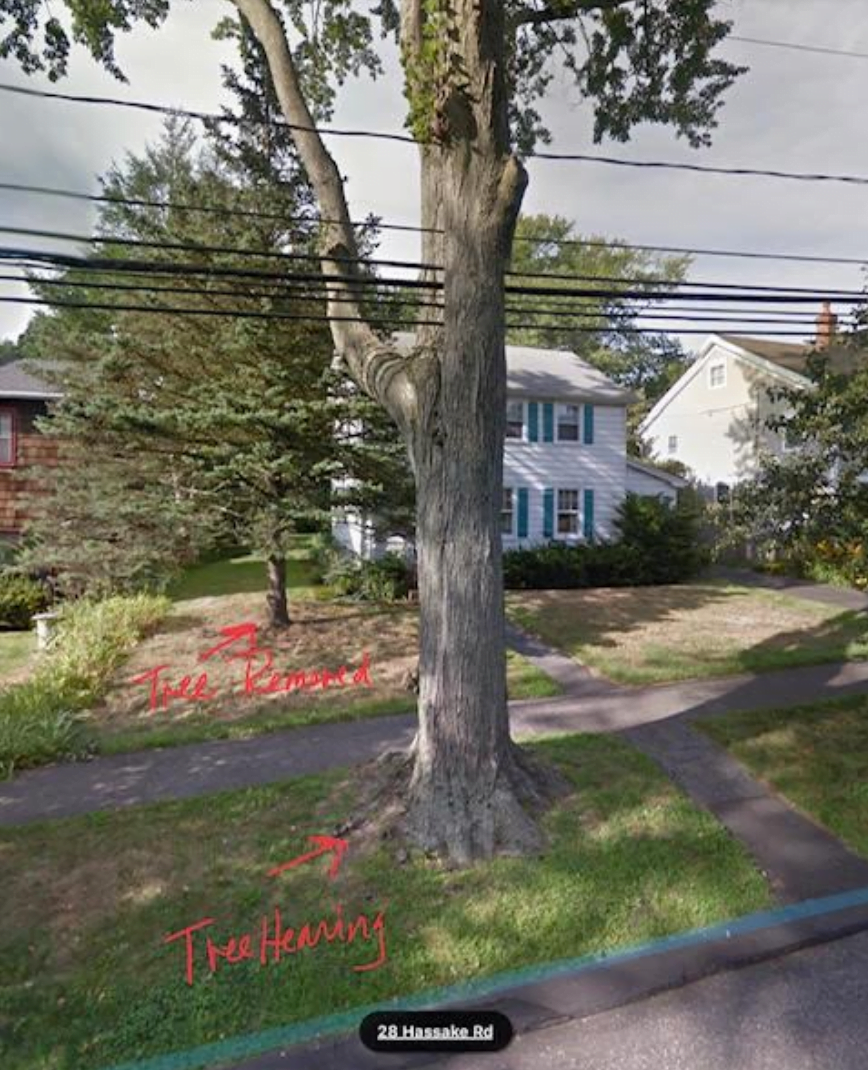 28 Hassake in Old Greenwich before being demolished and the pine tree in the yard cut down. the tree between sidewalk and roadway is the one subject to Tree Warden review. Contributed photo

A second tree posted for removal is in Old Greenwich at 28 Hassake Rd, where a house has been demolished and a large pine tree has already removed to make way for a spec house.

“My understanding is this is a large healthy tree and that removing it could be avoided by relocating the proposed driveway,” said Mr. Malkin.

“It’s commonplace at tree hearings to hear from the person asking for the removal first,” said Ms Messina. “Is that person on the call and can they state why the tree needs to come down?”

There was no reply. 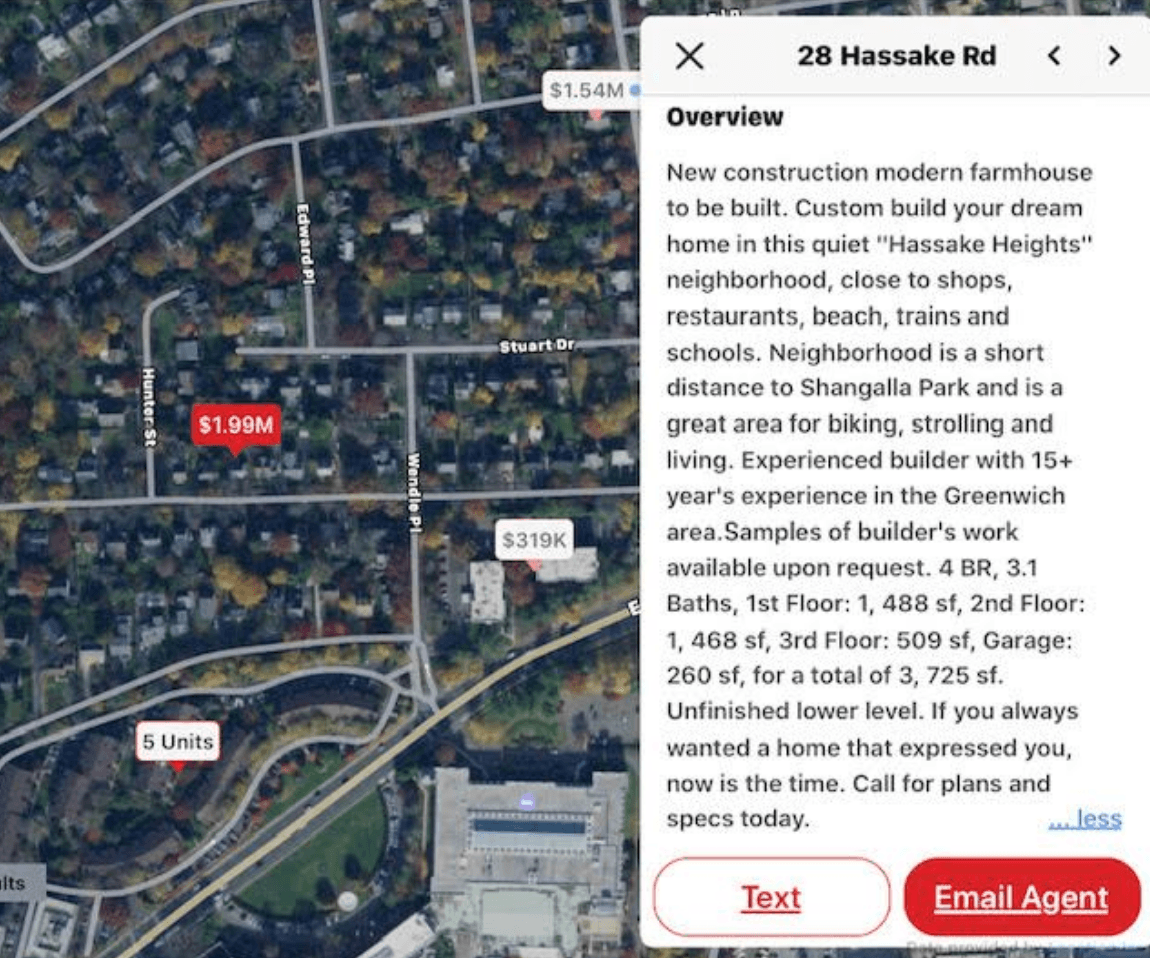 Ms Alvarez said the owner was building a spec house, not a home for their own use. “It seems to me you can move the driveway back to original side. No one is demanding it be on the left side.”

Ms Alvarez pointed out the property had already been clear cut, and that the town tree was large and healthy.

She said there was no apparent need to move the driveway from the right to the left of the property, and keeping it in place would spare the tree.

Further, she said, “We are talking about two trees. There was a nice size tree on the property that was already cut down.”

“Even though I know we’re talking about one application,” she said. “The mature roadside tree canopy is being assaulted and basically dying a death by 1,000 cuts.” 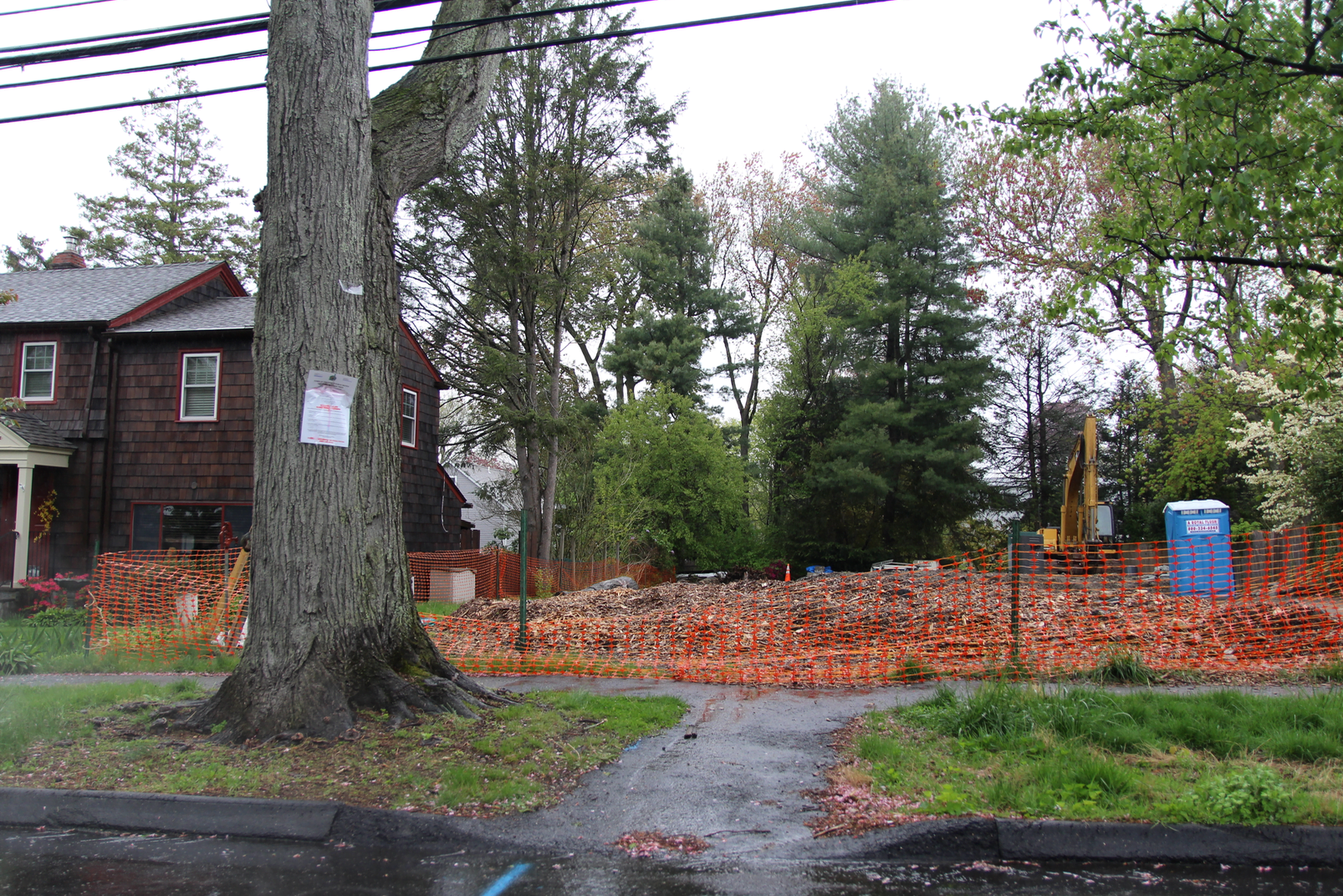 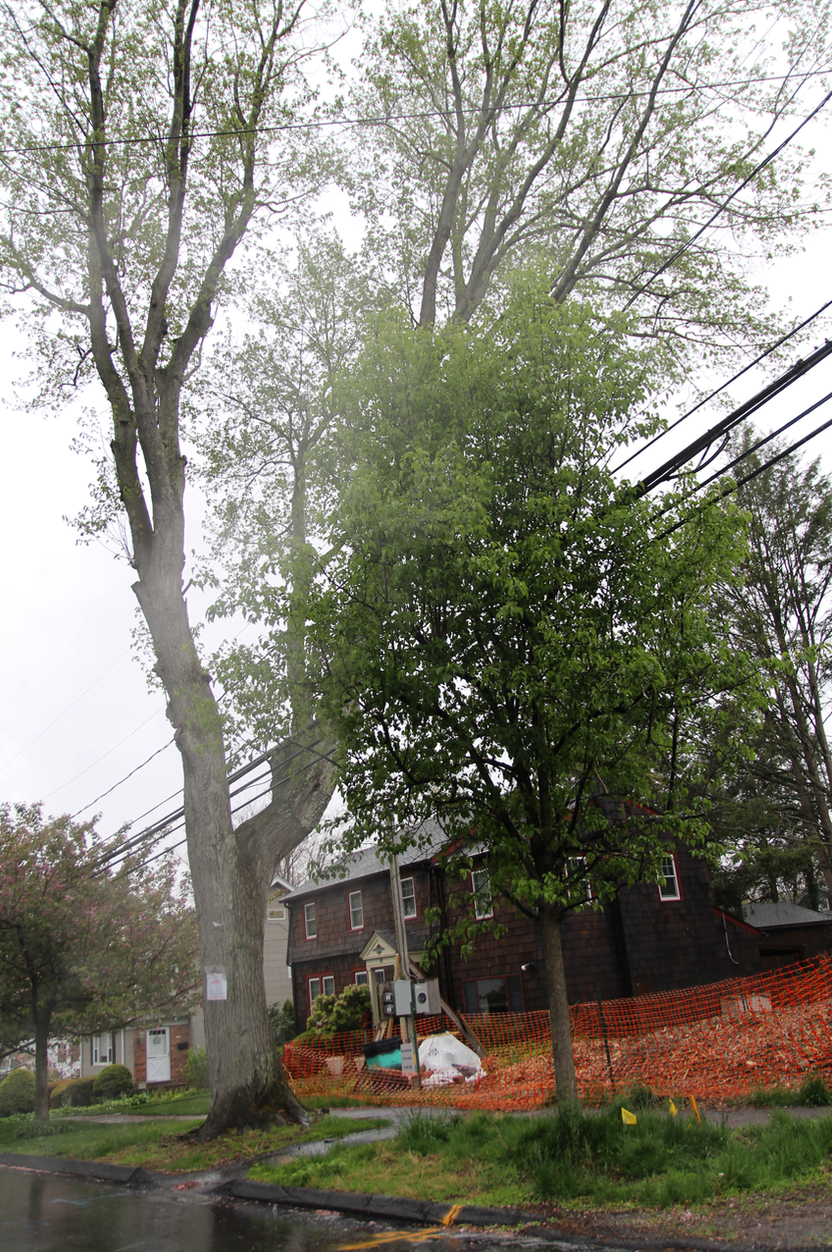 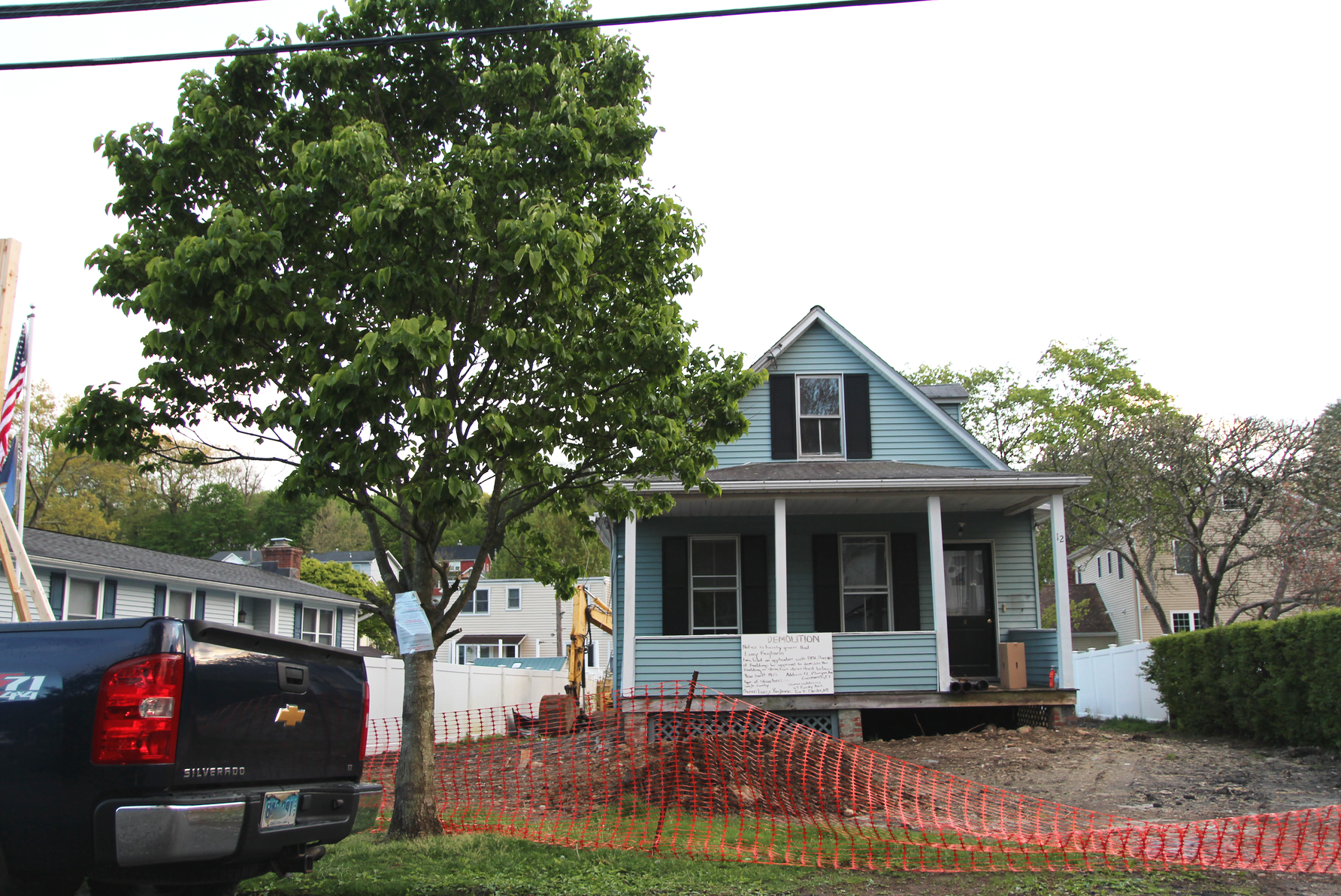 12 Morgan Ave is posted for demolition. The owner wants to remove a town tree, a Lilac. May 9, 2020 Photo: Leslie Yager

A third tree posted for removal is at 12 Morgan Ave in Pemberwick. The developer, Luigi Rogliano, lives down the street said wants to build a new house for his parents on the lot.

The house is posted for demolition. Mr. Rogliano was present on the call.

Rogliano said he needed to cut down the tree because the sewer line needs to be replaced, and it about 1-1/2 to 2 ft away from the tree.

“The house has been abandoned for 10 years. This is just delaying the removal of an eyesore.” – Luigi Rogliano

“We can’t work safely with the tree there to replace the sewer,” he said.

Members of the Tree Conservancy asked why the issue of the sewer line was not mentioned on the site plan.

“When I viewed this tree there was no talk of a sewer line,” said Ms Messina. “There was just talk about moving the driveway. The site plan was submitted on April 17.”

“Maybe my engineer didn’t put that the tree needs to be removed (on the site plan) because of sewer line,” Rogliano said. “But if I had personally dropped them off, I would have.”

Rogliano said he couldn’t drop the plans off in person because town hall is closed due to the pandemic.

He assured the members of the Greenwich Tree Conservancy that the sewer inspector was on the property before the plans were submitted.

“My engineer might have made a mistake with not putting it on the site plan. It might have fallen through the cracks with everything going online during the pandemic,” he added. “We lose the personal connection and ability to talk to people.”

Peter Malkin urged the tree warden to bring in the sewer commissioner to see if the infrastructure work can be done without removing the tree.

The Tree Warden will issue his decisions on all five trees within three business days.