Birdie’s Auto Spa comes to your home or office with their mobile spa that cleans with steam for an efficient eco-friendly clean up.

When the crew arrives, the contents of the Birdie’s van are simple: the green steam machine with its detachable steam chimney, polishing machine, 50 foot hose and a vast quantity of towels. 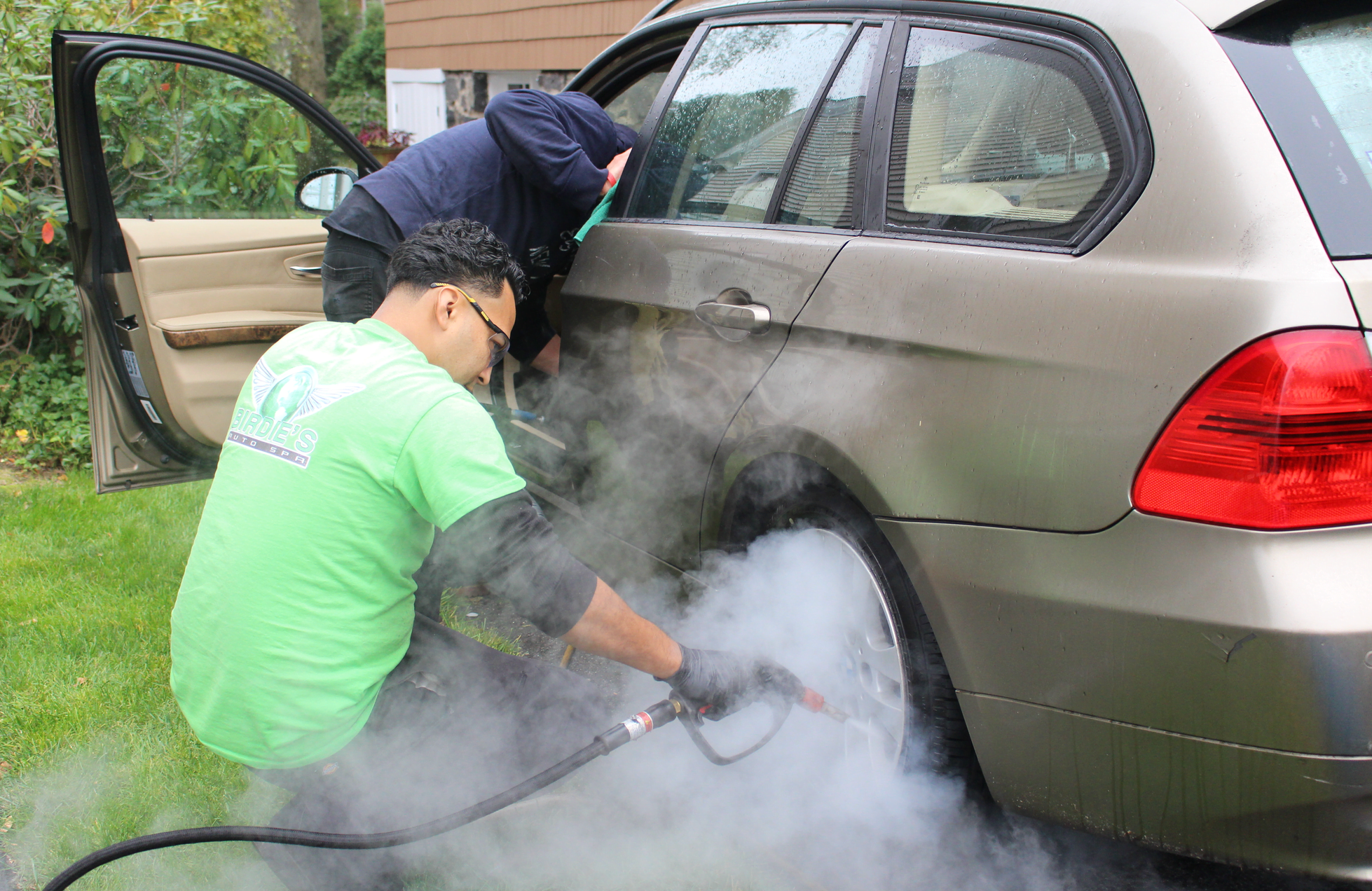 At the end of the 50 ft hose attached to the machine inside the Birdie’s Auto Spa mobile van is a gun that cleans with a safe stream of steam for an efficient, and eco-friendly clean-up. Not only does the steam method produce amazing results, but it requires less than one gallon of water to clean a car. Credit: Leslie Yager

Not only does the steam method produce amazing results, but it requires less than one gallon of water to clean a car.

The idea of steam cleaning cars began for Eric Birdsall, “Birdie,” when he had a side job in college detailing cars for friends. Birdsall, who grew up in Rye and is married to Christine Sena who grew up in Greenwich, said he’d always dreamed of being self-employed.

“I saw these steaming machines online and they were so compelling,” Eric said. “I flew to California for a demo and that was it.”

“I remember scaring my wife and her father, telling them I was going to get one of these machines and quit my job,” he recalled.

Since he started five years ago, Birdie operated his steam detailing business out of a former gas station in Rye near Playland.

“When I got approved for zoning in Rye, I was the first stand-alone car wash that did not have drains as a requirement,” Birdie recalled. “Traditional car washes use 30-50 gallons of water per car. People who use their hose to wash their car in the driveway can use 80-100 gallons of water.”

“We found a former gas station with an old old brick building we fixed up. We had a nice sofa for people to sit and wait while we detailed their cars,” he said, adding that the process takes about 90 minutes. ”

“But customers, primarily women, kept asking for a ride home rather than wait in the shop,” Birdie recalled. “I was spending so much of my day interacting with customers and giving people rides,” he continued, adding that the rent was high and the busy shop was open six days a week. “Then I realized I just didn’t need the shop.”

Birdie then transitioned his operation to a mobile service, available by appointment.

Though the business model has evolved, the gamble has paid off. 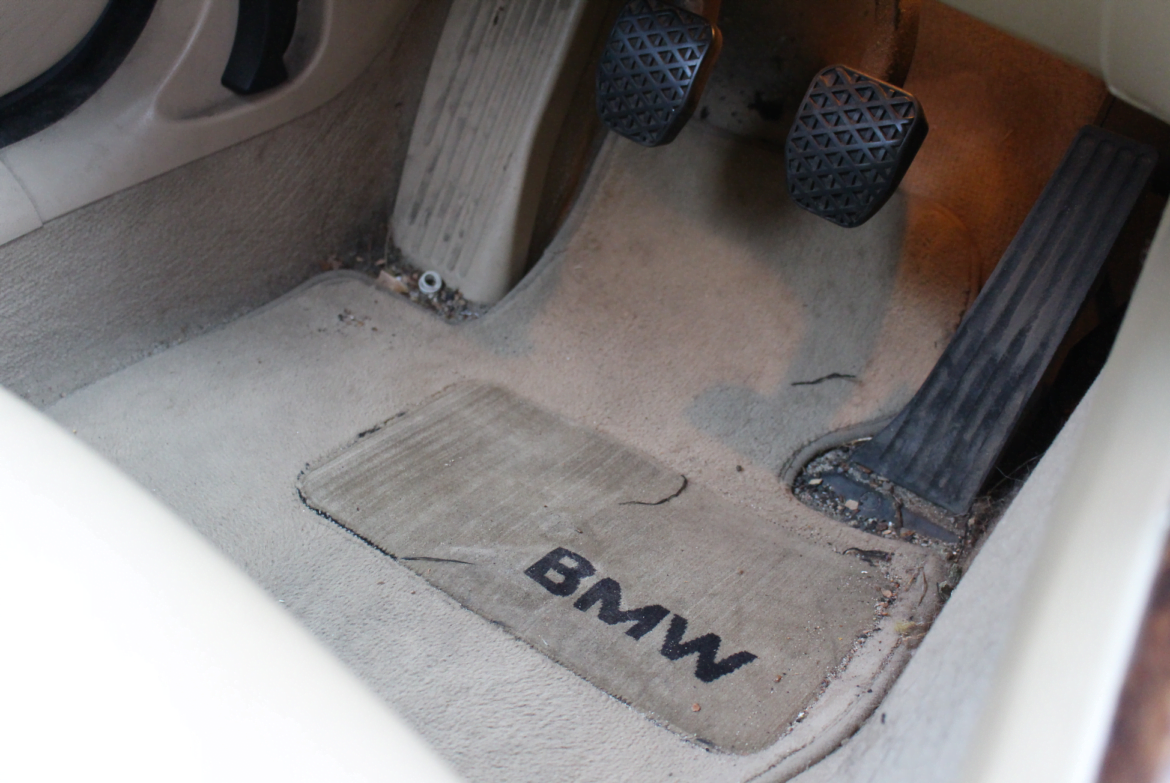 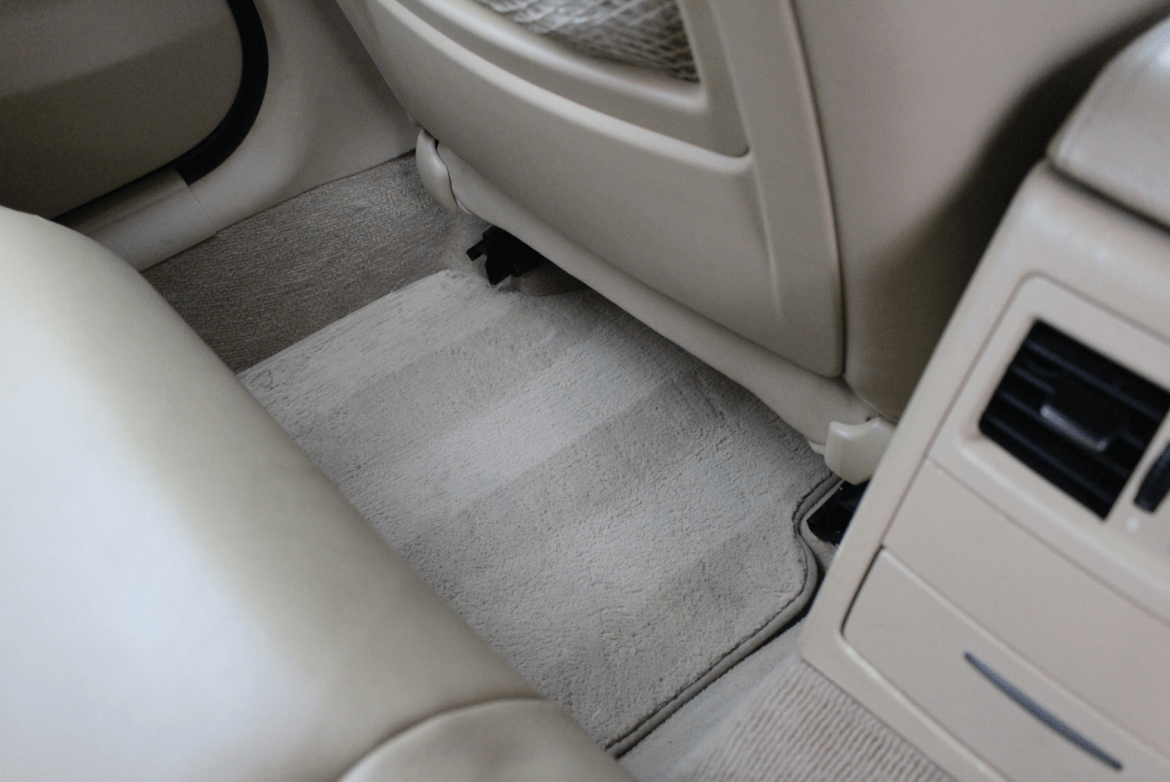 Customers are increasingly comfortable having service workers come to their homes. “We often find ourselves sharing the driveway with the mobile dog groomer,” he said.

In fact, he said quite often there is no interaction with the customer. “People leave the car in the driveway and either use a different vehicle that day, or walk to the train,” Birdie said, adding that services take place mostly in driveways or garages, though his crews also visit parking lots at office building by arrangement. He even counts professional sports teams among his regular customers.

Birdie said a huge chunk of his regular customer base is families with kids.

“We see a lot of Cheerios and spilled milk,” he said, adding that they can also steam sanitize strollers and car seats. “We have a lot of moms, but a lot of dads call us to clean  their weekend car,” Birdie said.

In fact, he said a popular auction item he donates to local school fundraisers is called “Mom’s Dream,” which includes interior detailing and exterior steam clean.

“In this line of work I don’t get a lot of complaints. It’s a service people appreciate and tell us how happy they are,” Birdie said. “We follow up with every customer and almost invariably they are thrilled.”

More information about Birdie’s Auto Spa is available online. Call, text or email (914) 438-5729 for an appointment 7 days a week. Find them on Facebook. 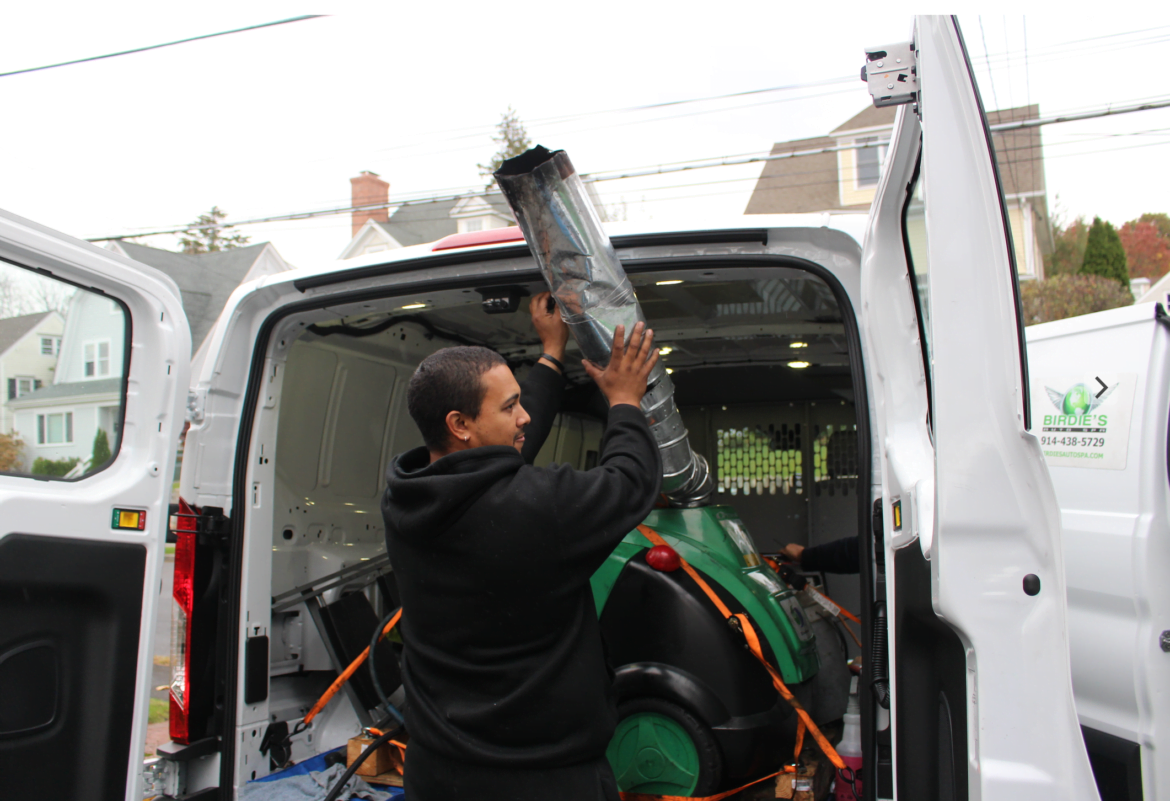 In Greenwich, Birdie’s Auto Spa van arrives with the crew of three who took 90 minutes to detail the interior and exterior with steam, as well as apply apply a cream compound with a polishing machine. Inside the van a big green steamer has a detachable chimney. The machine is connected by a 50 foot hose to a gun that emits a cleansing stream of steam. Credit: Leslie Yager

In addition to steam cleaning the vehicle’s exterior, Birdie’s team will compound the automobile with a cream they apply with polishing machine.

Another service is a hand wax, which winterizes a car. “It’s like getting a clear coat on your nails. The wax protects the paint and clear coat from the salt eating away at the clear coat.”

Birdie said that often people with older vehicles, or people returning a car at the end of its lease, often just want the car detailed inside and remove little scratches. People with new cars often opt for hand wax. 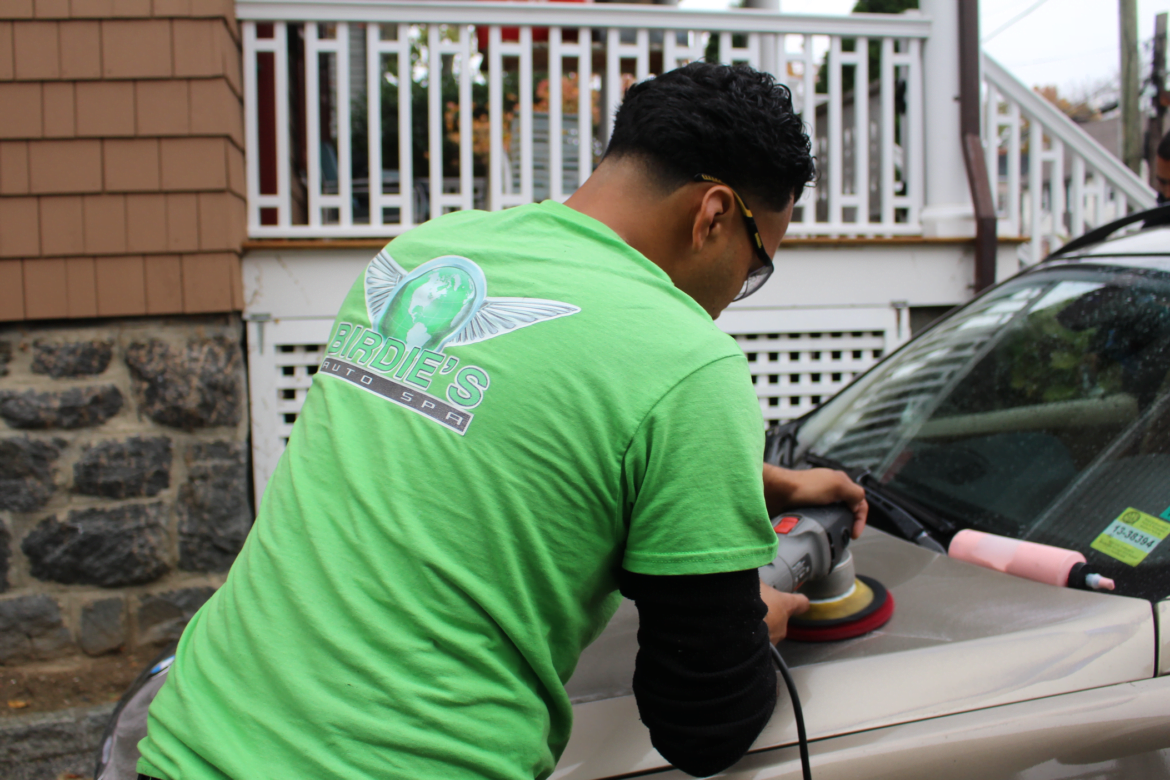 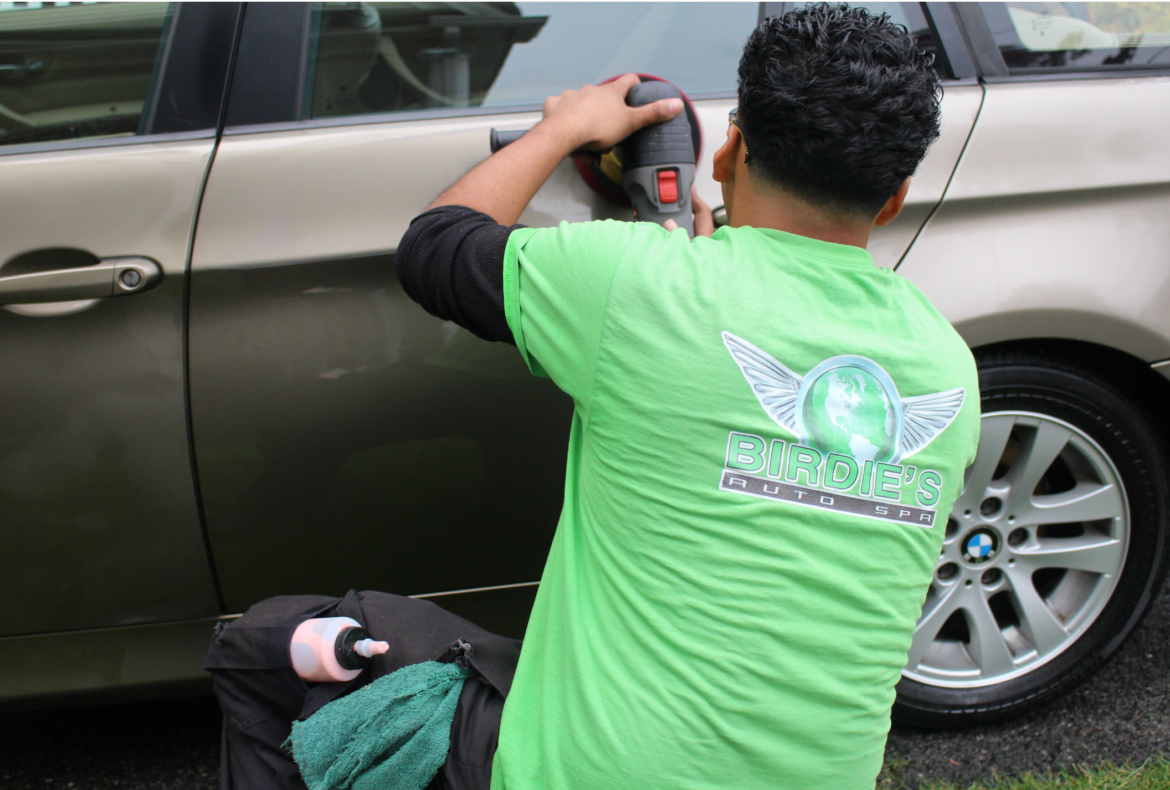 Applying the compound with a polishing machine. Credit: Leslie Yager 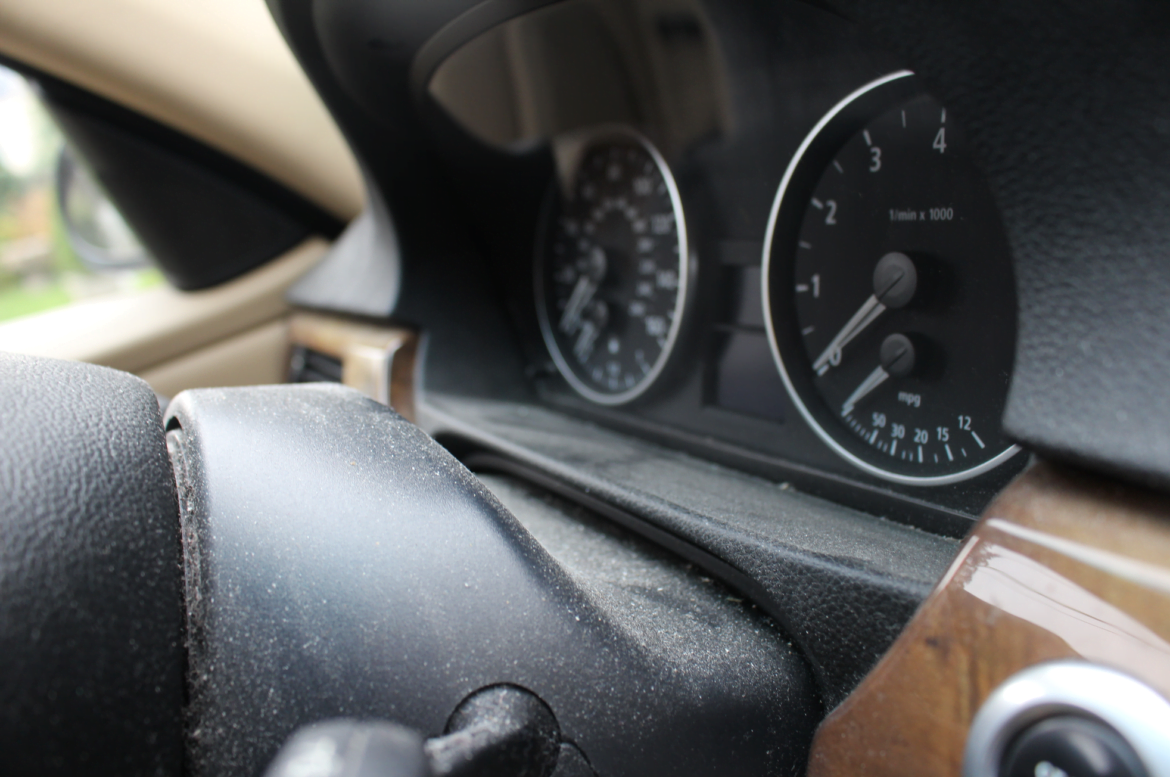 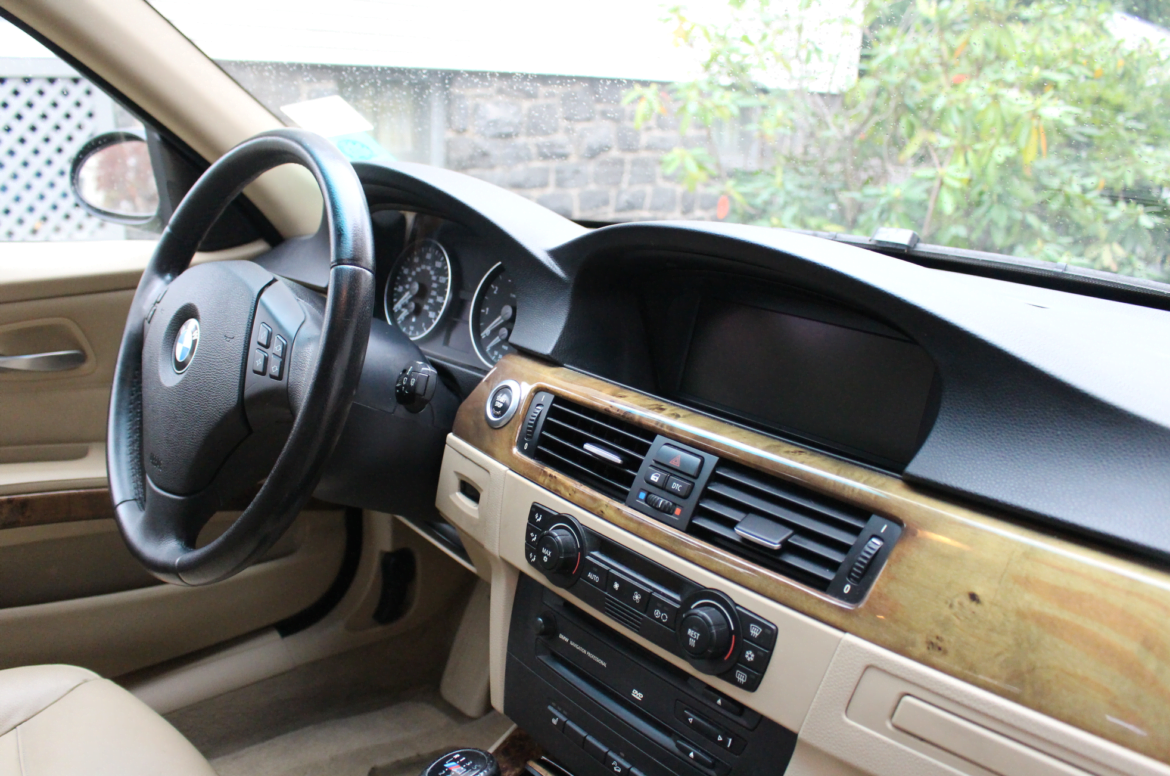 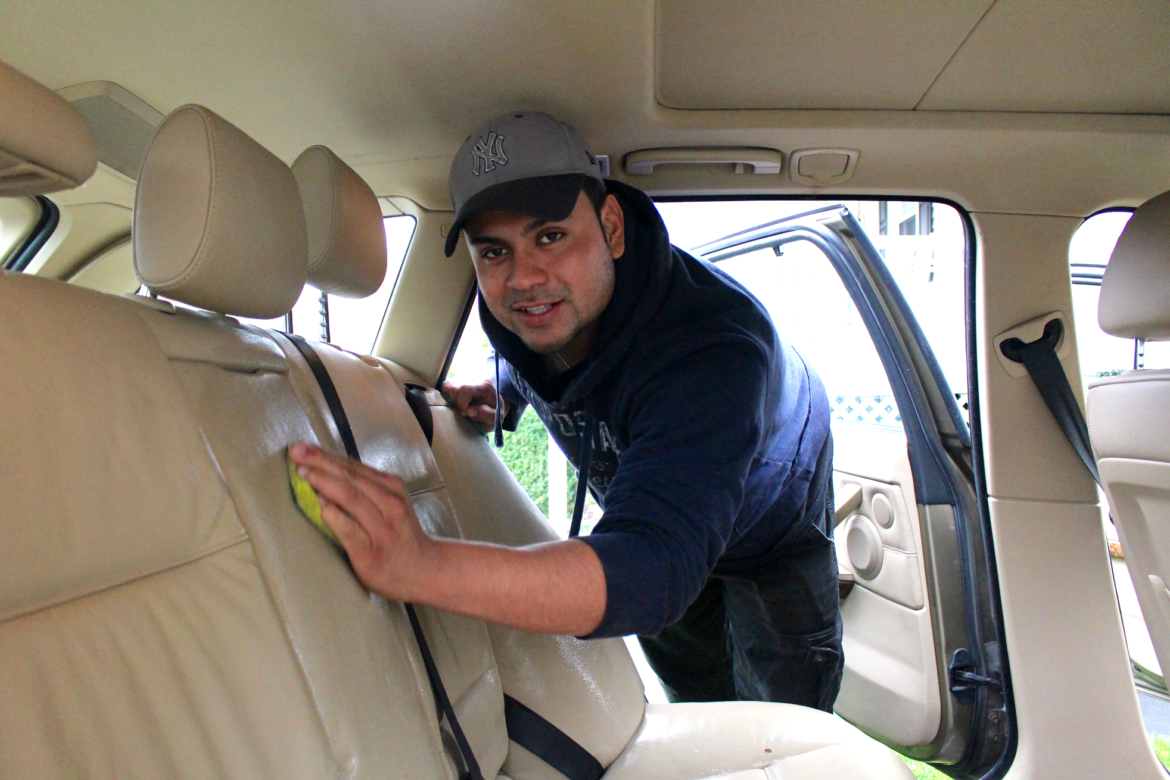 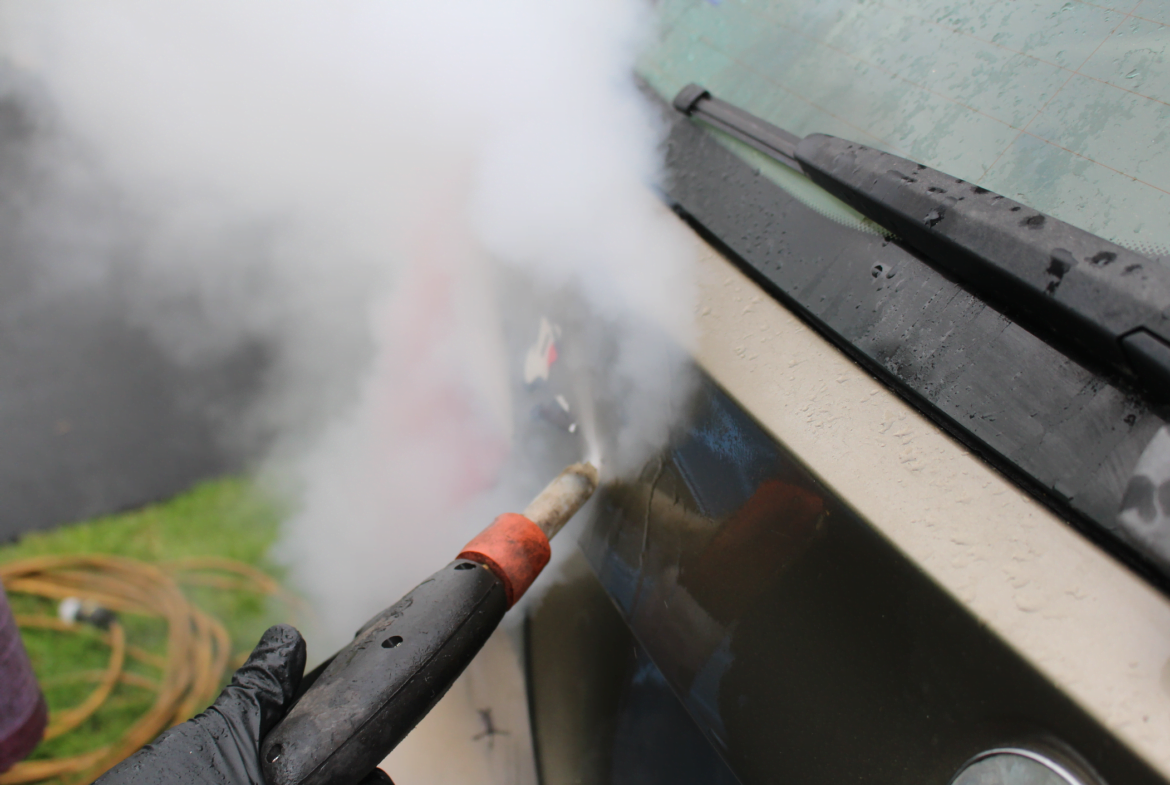 A magnet that had been on the car for several years wouldn’t come off until the crew from Birdie’s Auto Spa used their steam gun. Afterward, there was not a trace left.  Credit: Leslie Yager 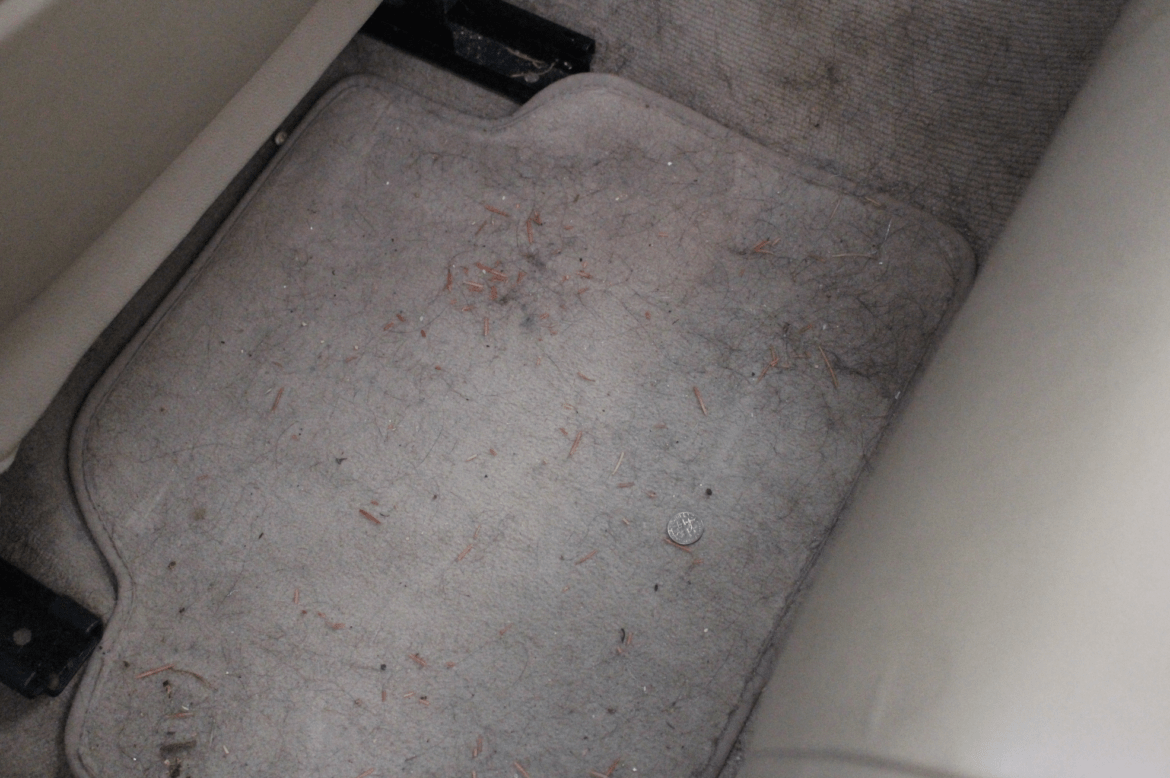 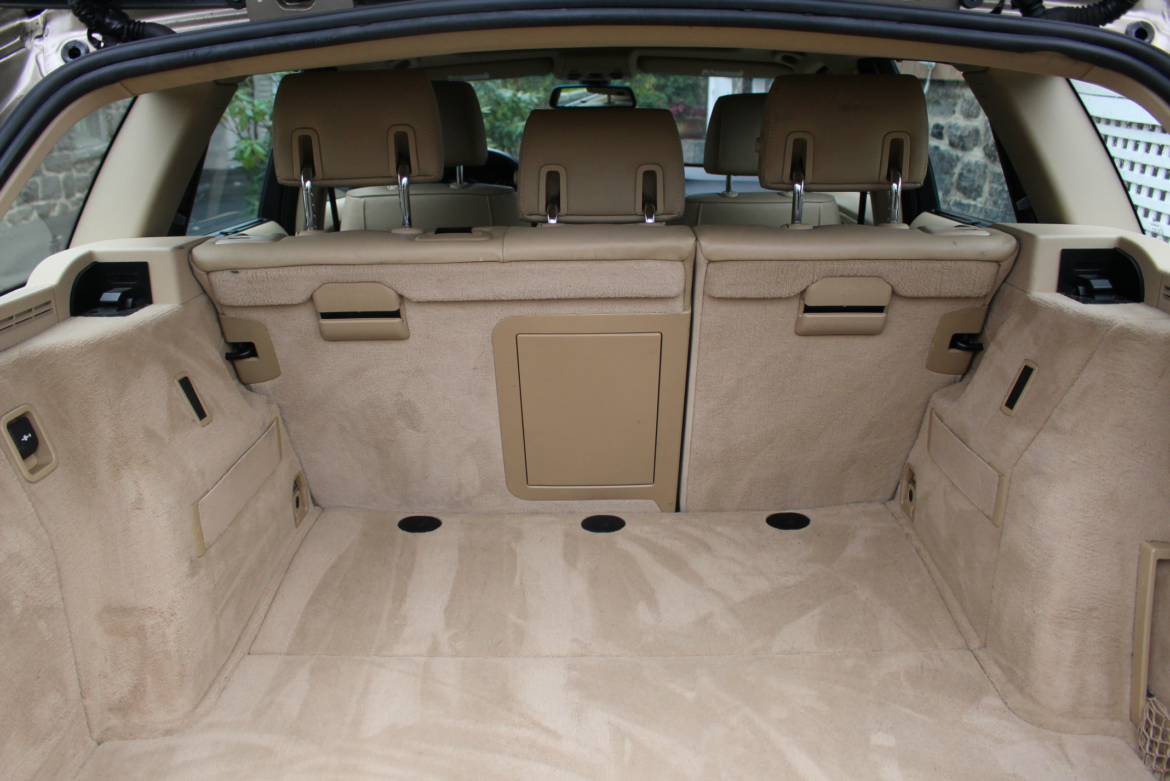