Between the recent New Yorker article about Greenwich in the era of Trump and the May 5th BET meeting, I imagine many from my community are feeling like we have a layer of scum on us that can not be scrubbed off.

387 parents and students from the Greenwich community logged on to the BET Zoom meeting on short notice in the middle of a work and school day in the hopes of coming together on the top of kids in our community. Dems from the BET requested this meeting to review potential compromises to the schools budget cuts.

Mike Mason, chair of the BET, stated in the New Yorker article that he cares about the 60,000 people in Greenwich. Oh really? He pulled the meeting shut on a rule that required the fine print analysis of the town lawyer. If he cared about his community he would have taken the time to hear and consider the pleas for compromise. 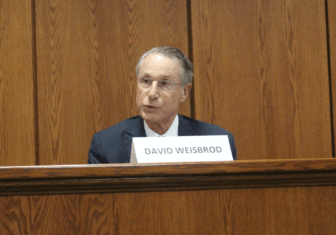 Do you know what rules do not require a lawyer? The rules of human decency! The real leader in the special BET meeting was David Weisbrod, who spoke on the behalf of the community – demanding that the points should be heard, and if it works – it works, and if not, so be it.

New Yorker, you hit the nail on the head. Today’s GOP have a thirst for power without any of the bother of a moral compass.

National leadership and the lemmings that followed suit created a space that is free from the mess of accountability and conscience.

That could be understandable (not acceptable) in federal government – but shameful in local government where every constituent has a name or a face that you recognize. In particular, there must have been some awareness that the call’s listeners were also children.

We are probably one of the most “branded” towns/cities in the country. Articles like Evan Osnos’, New Yorker article and Googleable controversies such as this one weigh heavy on our community and prospective home buyers. What does this messaging say to outsiders who are considering Greenwich? Young families in the New York area have values that go beyond purse and power. That is very obvious by the diversity and political affiliation of people who have moved here in the last 10 years.

The country is fractured – why must we be?

Greenwich students – do not feel defeated. Thousands of people in your community are fighting for you, writing letters for you, showing up to Zoom meetings for you, starting Facebook groups for you.

Thousands of us are showing up and saying that we will fight tooth and nail to make sure we can avoid cuts to education – the most important thing a child can have; while a sad 6 did not.