On Saturday, October 12th, the Hispanic Advisory Council of Greater Stamford hosted its annual Honor Your Health fair at its campus in UCONN Stamford. Featured at the event was Gizmo, a 9-year-old therapy dog for mental health, who was there with his owner, Jenifer Adams, to read their story, Gizmo’s Pawesome Guide to Mental Health. Along with Gizmo was Gadget, another therapy dog brought to the event, who is just 2 years old and who lives with Gizmo. 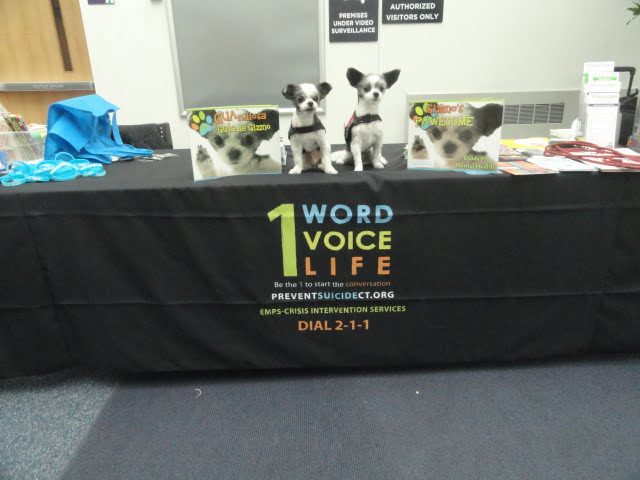 Gizmo and Gadget sit atop the 1 Word, 1 Voice, 1 Life booth at the fair at UCONN Stamford. Photo: Melanie Leguizamon.

In the book, which is free of charge on Gizmo’s website, Gizmo informs his readers about how to take care of their mental health and wellness both individually and with help from others, including trusted adults. Through the book’s child-friendly approach to discussing mental health, kids learn how to communicate their feelings with those around them and how to cope with them. 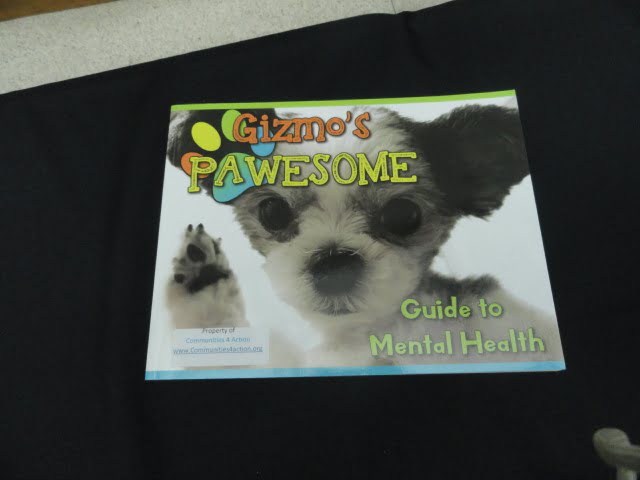 “Gizmo’s Pawesome Guide to Mental Health” book featured in both Spanish and English was passed out for free to guests at the fair. Photo: Melanie Leguizamon.

“It’s really awesome to see the dogs be able to make the connection between the kids and mental health,” stated Jenifer, who was at the fair telling guests about her dogs. 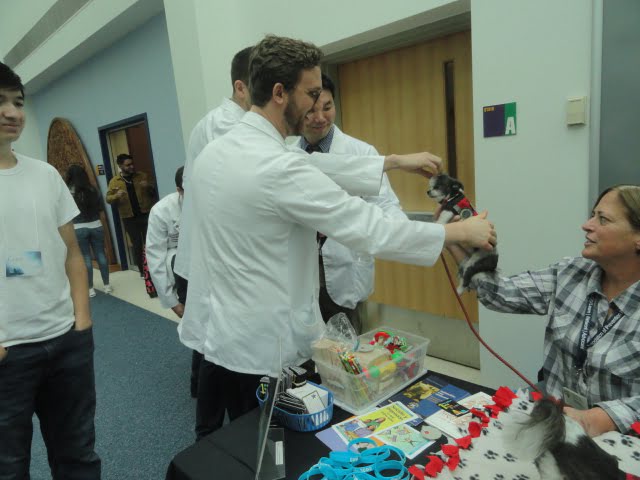 Doctors from other booths at the fair stop by to learn about Gizmo. Photo: Melanie Leguizamon.

Gizmo, aside from being an adorable Miki dog, is also a K-9 First Responder and the mascot for the Connecticut Suicide Prevention Campaign: “1 Word, 1 Voice, 1 Life… Be the One to Start the Conversation.” 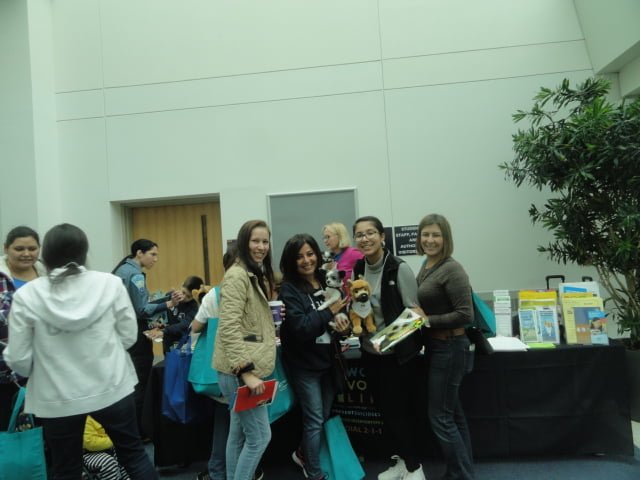 Guests pose with Gizmo in front of the Communities4Action booth at the fair. Photo: Melanie Leguizamon.

While she had not initially intended for Gizmo to be a mascot for mental health, Jenifer was approached by Andrea Duarte, the Co-Chair of the Connecticut Suicide Advisoty Board for 1 Word, 1 Voice, 1 Life, and accepted the opportunity for Gizmo to help others.

In fact, when Gizmo was a puppy, Jenifer knew that he would soon be helping people with trauma, so she got her own masters degree in trauma in order to use that education as a base for her work with mental health. 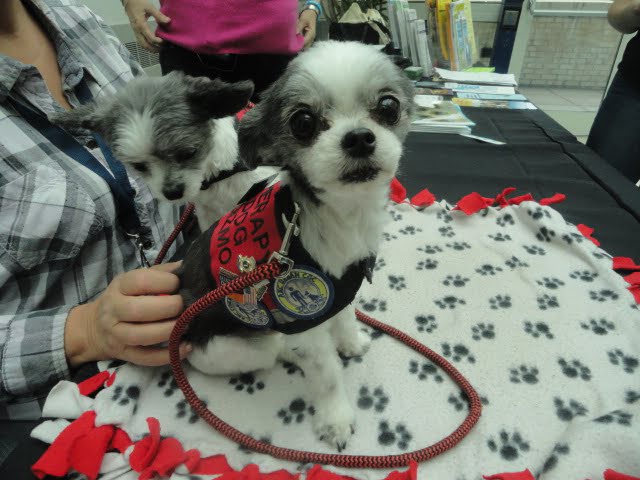 Gizmo sits on his blanket on at the Communities4Action booth to greet kids. Photo: Melanie Leguizamon.

In addition to coming to the fair on Saturday, Gizmo and Gadget have also traveled to other events such as Belief 208, Earth Animal, the State Suicide Prevention Conference, and much more. They also frequently visit hospitals and nursing homes, and Gizmo, being a community emergency response team comfort K-9, even goes to police and fire departments to aid first responders after a trauma.

On Saturday, Gizmo’s story was read aloud in both English and Spanish to children passing by, and was also given out for free to anyone who wanted a copy. 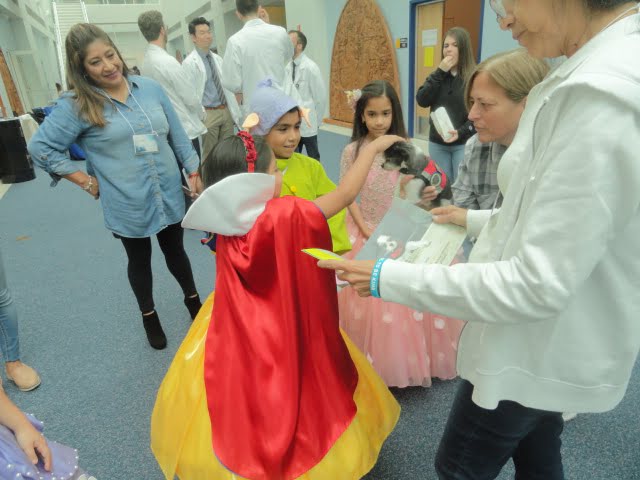 “The book is based on research on adults, but for the first time it is being geared down for children,” noted Jenifer. Today, the book is being used nationwide in hospitals, schools, and many more places to teach children about their mental health.

Gizmo’s published story can be found on his website or with the link to its pdf version below: https://www.gizmo4mentalhealth.org/wp-content/uploads/2017/09/GizmoPawesome.pdf 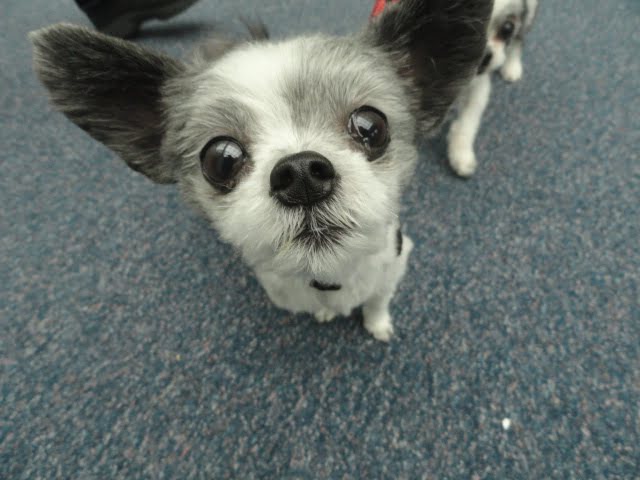 Gadget comes right to the camera for his close-up. Photo: Melanie Leguizamon. 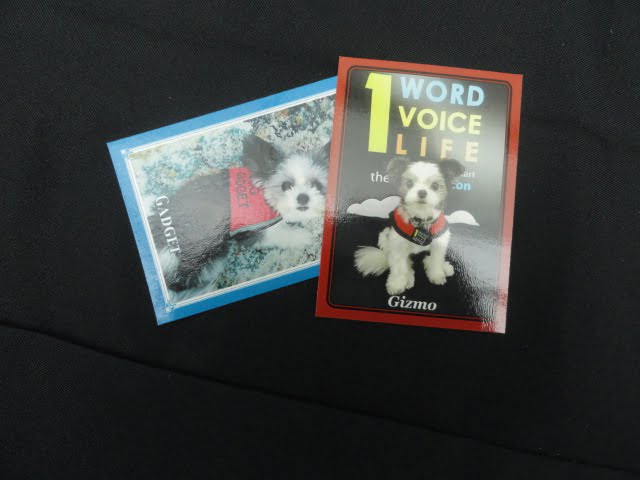