On Thursday the Board of Selectmen voted in favor of a September 13 event being organized by the Greenwich Police Emerald Society and the Combined Organization of Police. 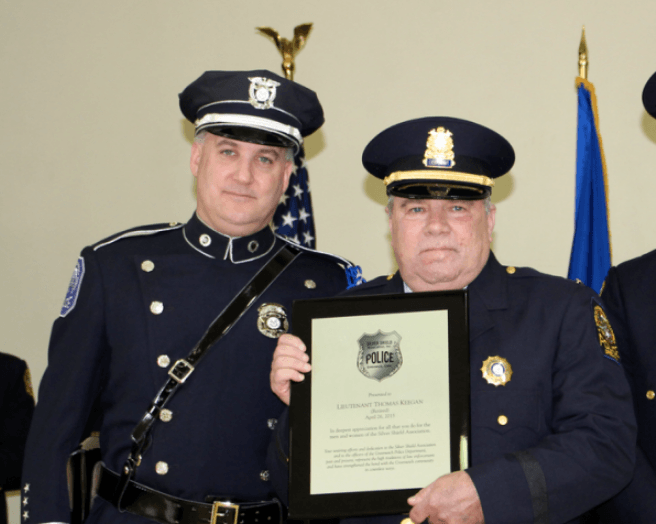 Detective Bonney noted that bagpipers practiced all year for the St Patrick’s day parades, but they were canceled to slow the spread of COVID-19.

The Sept 13 parade, which will be led by the Board of Selectmen, will feature numerous bagpipe bands and honor first responders, health care workers, and everyone who has been on the front lines during the COVID-19 pandemic. It will include some classic police cars and fire trucks. The Selectmen will ride in convertibles.

The route will initially follow that of the canceled Greenwich’s St. Patrick’s parade, beginning at Greenwich Town Hall, moving up Field Point Road, and turning right on Putnam Ave. The parade would move south on Greenwich Ave, which would feature a small reviewing stand.

At the bottom of the Avenue, the parade will turn right on Railroad Ave and then split, with vehicles taking a left to finish in Horseneck Lot, and everyone on foot moving up Arch Street, and taking a left on Bolling Place to finish in the field between Town Hall and the Havemeyer building. 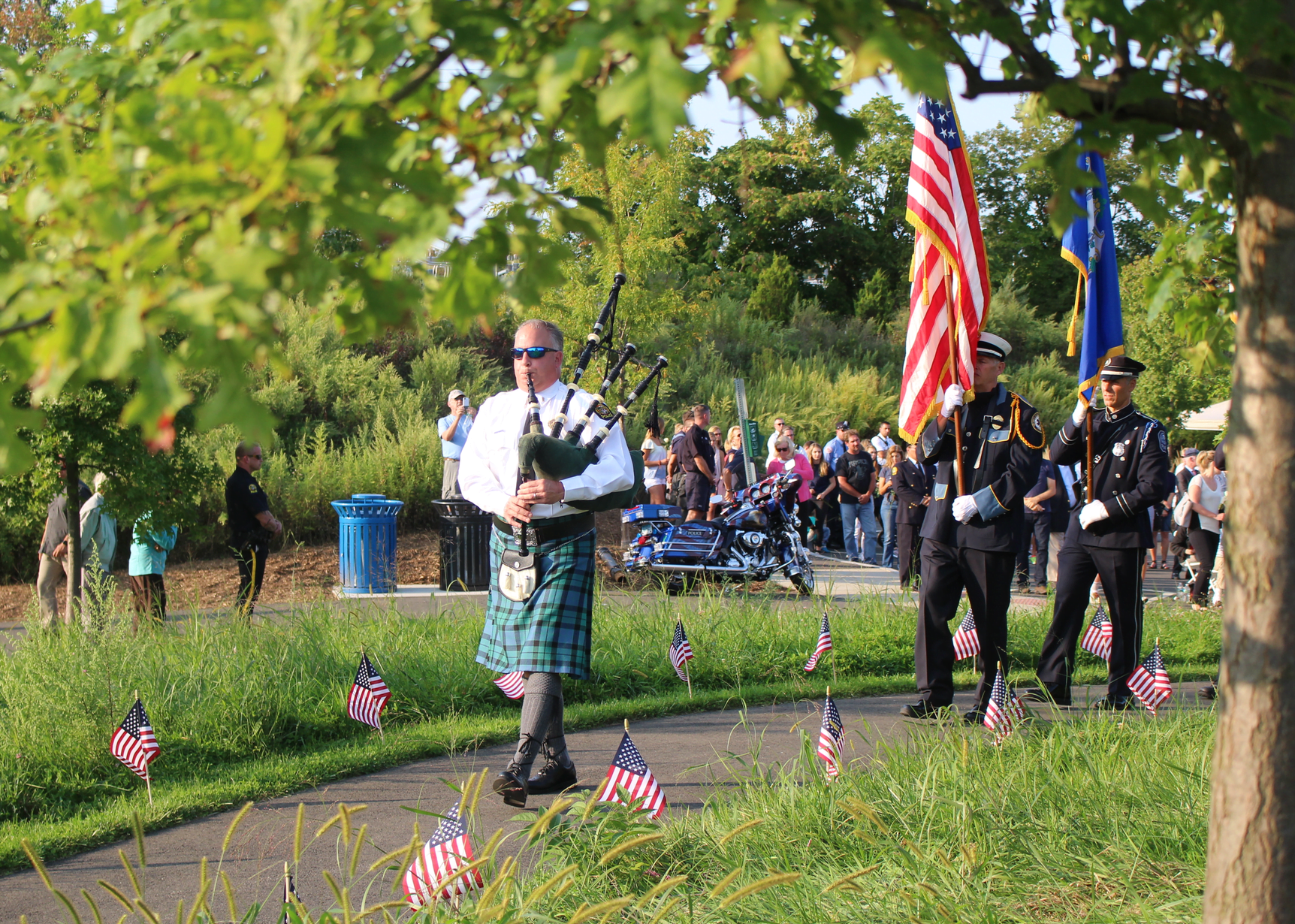 Lt James Bonney played the bagpipes as he led multiple honor guards to up the hill to the September 11 memorial in Cos Cob Park. Sept 11, 2017 Photo: Leslie Yager 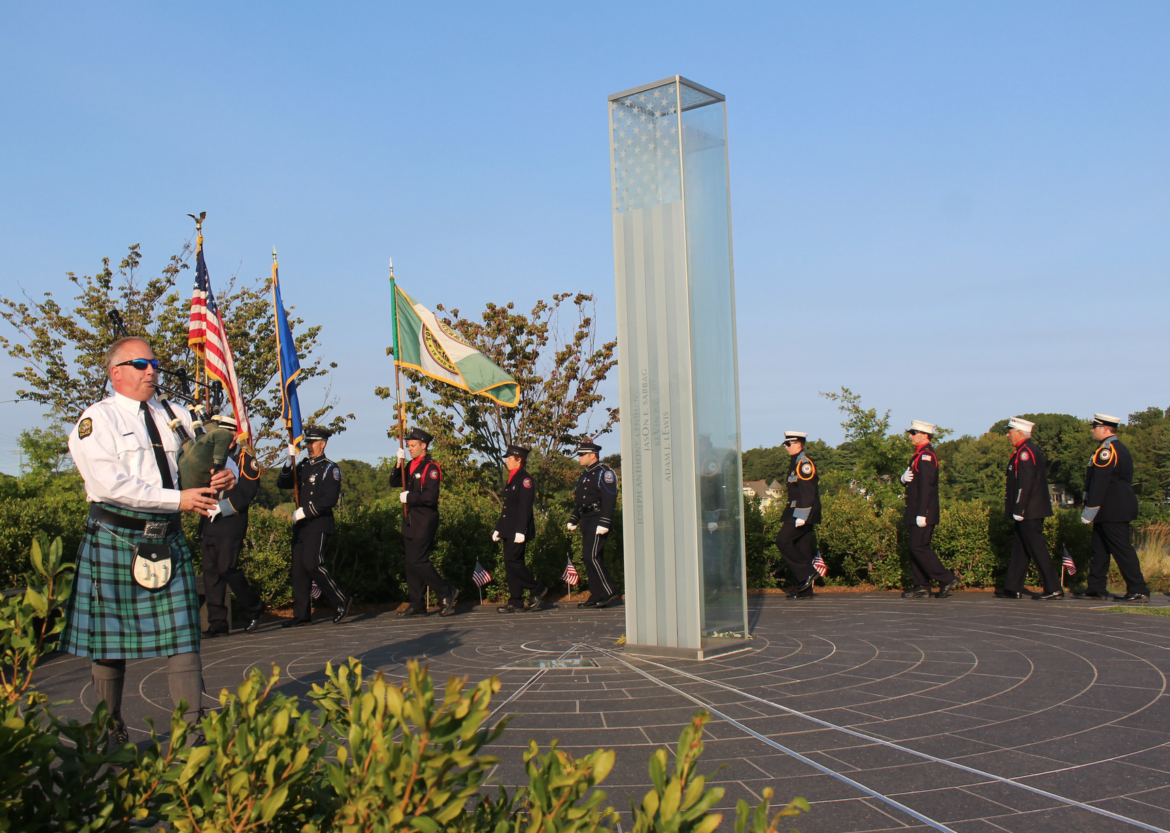 Lt James Bonney played the bagpipes as he led multiple honor guards up the hill to the September 11 monument in Cos Cob Park, Sept 11, 2017 Photo: Leslie Yager

Following the parade there will be a mass band of bagpipers playing at the same time.

“I challenge anyone to keep a dry eye when 30 bagpipers play Amazing Grace together,” Lt Bonney said, adding that the event will have a Celtic theme and people will be encouraged to wear kilts.

“Also, it will be a moving and a good tribute to those we lost in Town,” he said.

After the mass band plays, each bagpipe band will have a chance to play, and there will be trophies.

Lt Bonney said police honor guards from all over the country would be invited. 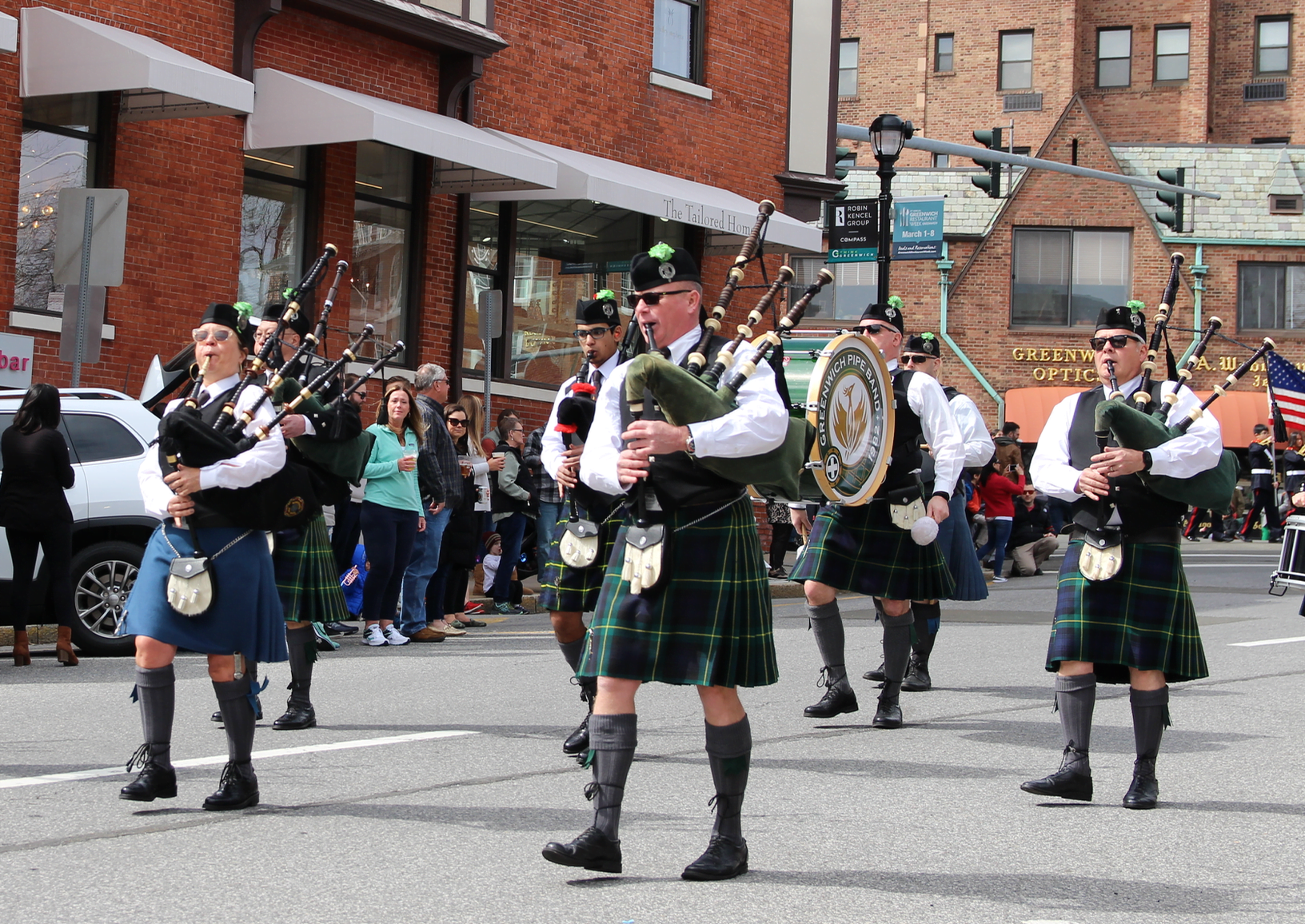 Food trucks will be positioned along the track in order not to damage the grass, and Detective Bonney pointed out that spectators could wear masks and spread out in the field looking down to the “bowl” at the bands.

Bonney noted that Sept 13 is a Sunday, and should the  Greenwich Town Party be rescheduled on Saturday, Sept 12, bagpipe event won’t be in the way of trucks and equipment being moved out of Roger Sherman Baldwin Park.

Also the event is on the last day the town ferries operate, but the bagpipe event would utilize Horseneck lot rather than the Island beach lot.

Lt Bonney and Captain Keegan have partnered on multiple projects over the years, including block parties and concerts in the park.

Bonney, himself a member of the Greenwich Pipe Band, said he has many friends who are bagpipers.

“For the last few years I’ve been pitching idea of bagpipers from all over coming to Greenwich for a competition,” he said. “I thought it would be a great draw, and a great community event.”

Bonney said he bounced the idea off Keegan, who suggested the event support hospital staff, doctors, and nurses, who have been helping during pandemic.

“It would be a great way to show appreciation for everything they’ve done,” Bonney said. “They put themselves in peril to help the town and the town would show up in force.” 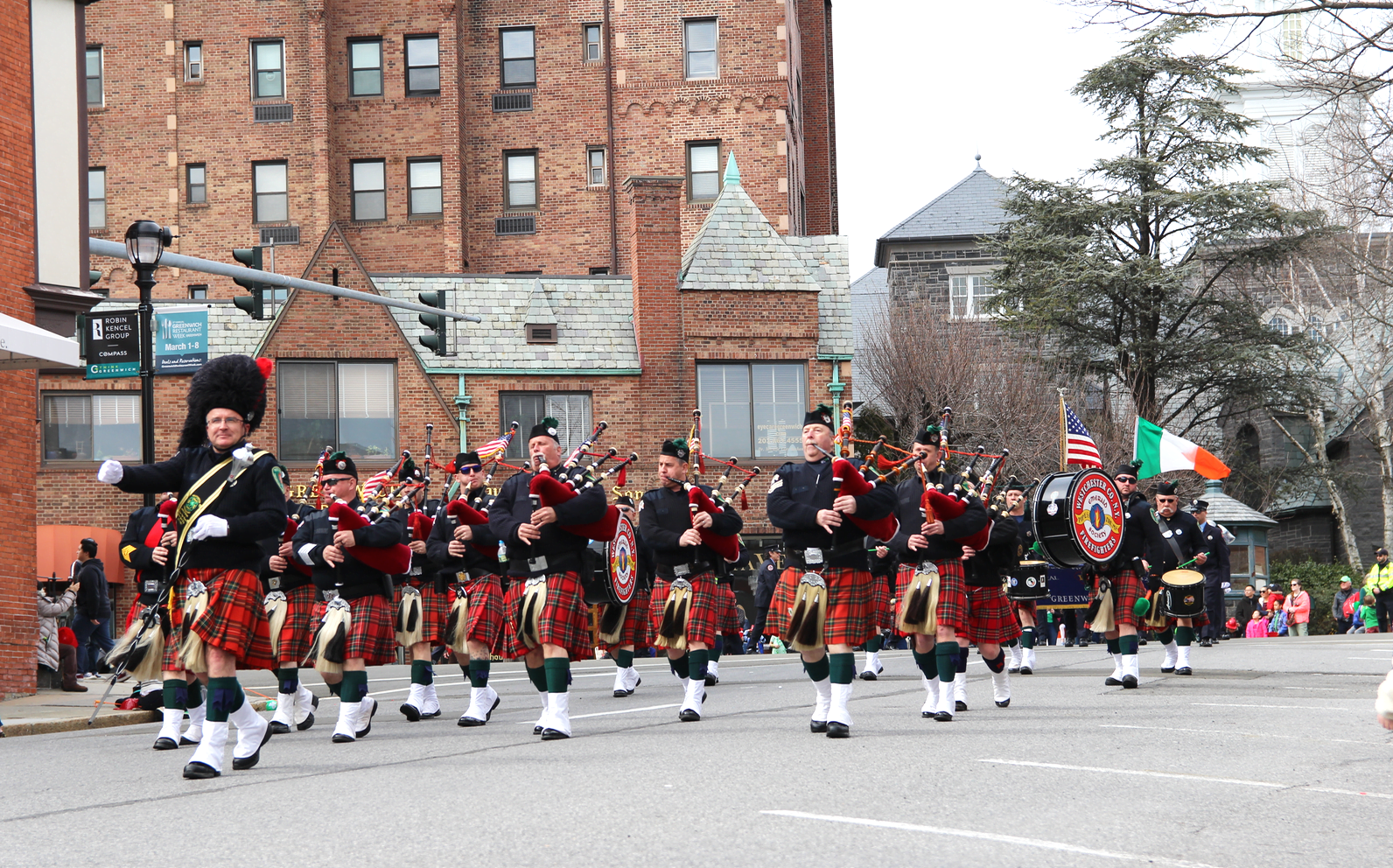 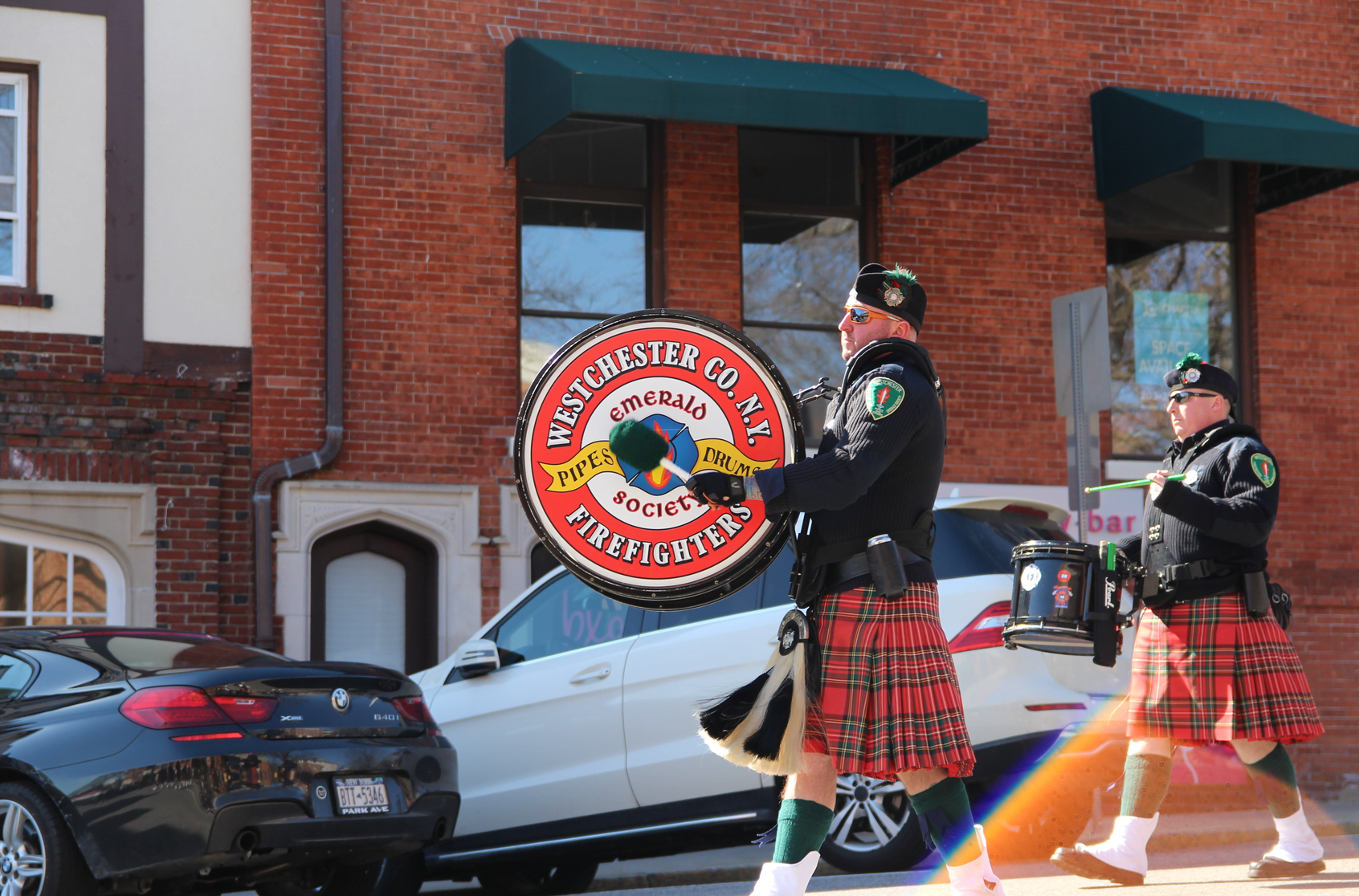 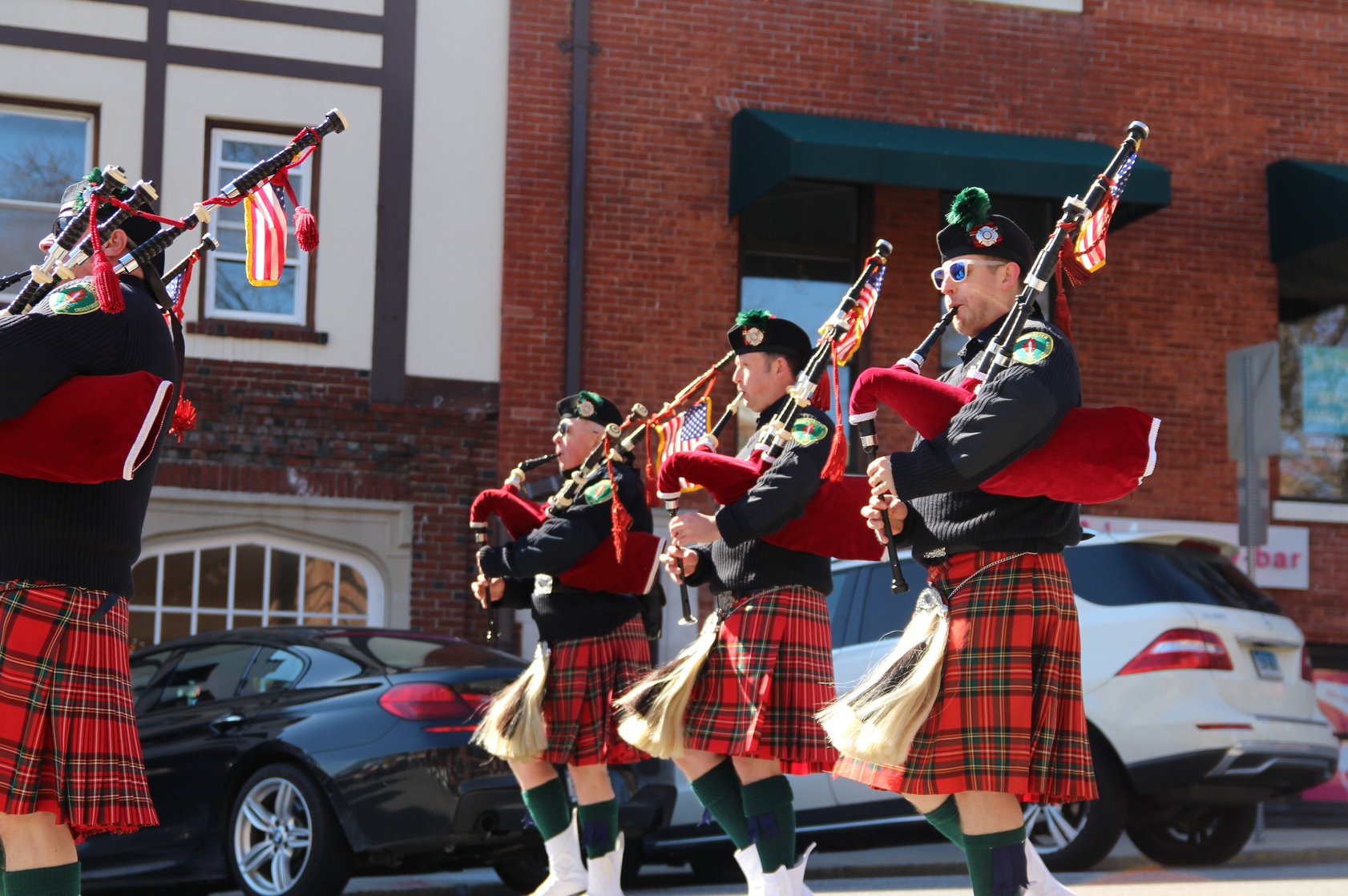 “I think the idea is great,” Keegan said. “It’s not just a re-creation of the St Patrick’s parade, but an opportunity for all of us to say thank you and celebrate the great work done by the people on the front lines of Coronavirus – not just Police, Fire and EMS. It would also honor people from the Parks Dept and the Tree Dept, and have them walk in the parade with cops, firemen and paramedics.”

“It’ll probably be time for all of us to let it all out and celebrate because everyone has been sitting on the edge of their seats for the last several weeks,” Bonney said. “Hopefully this will be all over by then.”

Lt Bonney said he had spoken to the Parks Director and assured him the grass will not be damaged.

In addition to food trucks stationed on the track, there might be some tents and tables. But, he said, “There would be no heavy equipment or trucks that would cause damage. He seemed to be satisfied. We have insurance. We’ve done many events in the past.”

He described the event as free and kid friendly.

“We don’t know what the future holds for us. People might be wearing masks and keeping distance, but it’s an outdoor event and there is plenty of space to stretch out,” Lt Bonney said, adding that the event is five months down the road, and hopefully not need to be canceled due to COVID-19.

“How can I say no to the guy who taught me how to skate and gave me my first ticket?” Camillo joked with Tommy Keegan.

“I think it’s a great idea. God willing we’ll be on the other side of this,” Camillo added. “Maybe this could be the beginning of a tradition here in town.”

The Selectmen voted unanimously in favor of the proposal.