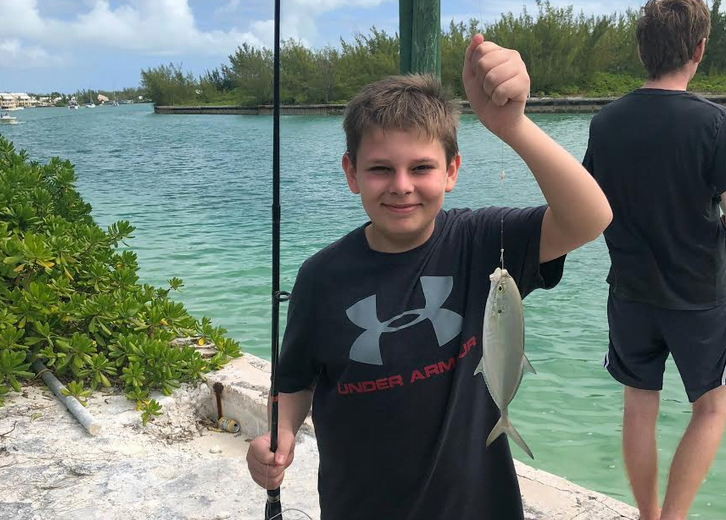 Steven Sudell passed away in 2018 and is still raising funds for  Make-A-Wish Connecticut.

Steven (nicknamed Weev by his family) was 13 years old when he was diagnosed with a rare cancerous brain tumor in April 2017. He went through proton beam therapy and chemotherapy during the summer of 2017 to treat the cancer. Following his treatments, he went for weekly blood and platelet transfusions while being homeschooled to keep up with his classmates in 8th grade. After some time, Steven was able to return to school and was happy to be back with his classmates.

In February 2018, Steven was well enough to travel so he and his family went on a vacation to the Bahamas, a wish granted by Make-A-Wish Connecticut. While away in the Bahamas Steven and his family enjoyed deep sea fishing and playing golf.

About a month after the trip, Steven wasn’t feeling well. Tests showed that the cancer had returned and this time there were additional tumors in his spine. Steven underwent more surgery and immediately following, began another round of radiation. Despite 19 months of valiant fighting, the treatments were unsuccessful, and he passed away at the age of 14 at the end of November 2018.

Inspired by his love of art, Steven created a YouTube page where he documented his drawings and gave updates on his illness. It went viral on reddit, was mentioned on celebrity YouTuber PewDiePie’s channel and garnered local media attention. Steven’s most popular video currently has 317K views and, to date, the page has close to 450,000 subscribers.

Because Steven and his family were so grateful to be able to spend valuable time as a family and create lifelong memories in the Bahamas, Steven shared early on that he wanted to help other kids and families have those same experiences.

While he was still alive, he made the decision to raise funds for Make-A-Wish and requested that his family continue to support the organization after he passed. Steven created a fundraising page for his followers and also asked that donations be made to Make-A-wish in lieu of flowers at his funeral. To-date, Steven has raised more than $30,000 – the equivalent of 3 wishes – and counting.

The Sudell family will continue honoring Steven’s legacy by hosting the first annual Weevster 18 Golf Outing at 11:00am on May 6th at the Griffith E. Harris Golf Club in Greenwich.

They still post on his YouTube pages and you can find #teamsudell on many painted rocks scattered across their town.

Even during the worst of his illness, Steven had a constant smile on his face and a big, giving heart. He was known for being “really funny and creating amazing drawings.” Because he continues to inspire hope, strength and happiness, Make-A-Wish Connecticut will be presenting him posthumously with their Youth Spirit Award at Wish Night on November 2, 2019.

Steven is among the largest individual youth donors in the organization’s almost 35-year history.