Brunswick seniors Addison Albano and Owen Gerber are busy planning an innovative fundraiser on April 17 that features a night of teenage go-kart racing at Grand Prix in Mt. Kisco.

The event is a 90-minute endurance race among some 20 or so teams, each comprised of 2 to 5 members. The goal is to raise awareness of the perils of distracted driving, and follows in the footsteps, or rather tire treads of Addison’s brother Ben, a winning race car driver.

“Distracted driving is a leading cause of death among teens. When you are a new driver, you don’t realize how dangerous it is,” Addison said, but he added that it’s getting easier among friends to talk about.

“I feel like our peers are more willing to hear it from each other. If a friend starts texting (while driving) I’ll just grab the phone from them,” he said. “I always ask them whether it’s urgent, and 95% of the time it’s not urgent at all.”

For Addison, who will head to University of Richmond in the fall, the decision not to drive while distracted was always a given. He said that knowing Julie Garner’s story had an impact on his decisions. Garner founded Project Yellow Light in honor of her son, Hunter Garner, who died in a car crash in 2007 at the age of 16.

Owen Gerber, who is looking forward to attending Wake Forest in the fall, also knows someone who was impacted by distracted driving. In his case, one of his grade school teachers in another town had shared her story of a tragedy that happened when she was distracted behind the wheel.

“She said she reached back and changed the DVD for her kids and killed an old man,” Owen said. “Getting my license and starting driving myself showed me how real that was.”

Owen and Addison described an assembly for students in grades 9-12 at Brunswick last year where texts to and from a girl and her friends appeared on a large screen. The sequence of texts recreated the teen being compelled to join her friends at the movies.  The lights went dark at Brunswick at the last text saying she was on her way in the car. “It was powerful,” Owen said.

Still, Owen and Addison, who both drive to school every day, insist that the anti-distracted driving message is most meaningful when it’s peer-to-peer. And while the danger of drunk driving seems to have gotten through, and, they say, young drivers do wear their seatbelts, both teens say they hope the anti-distracted driving message gets through and the habit can likewise be broken.

“Now people know drunk driving is very dangerous. We want to get the stigma focused on distracted driving because it takes your attention off the road and away from driving,” Addison said. “Especially guys think they’re such good drivers,” he added. “They think they’re fine, until something happens.”

“You really can’t focus on both the road and the phone,” Owen said. “In a millisecond, you’re not focused, something happens.” Own recounted how recently a deer had darted across the path of his car. “If I’d been distracted it wouldn’t have had time to jam on my brakes.”

Addison, who got his driver’s license the summer before his junior year described his younger brother Austen as a newly-minted driver.

“He literally got his license today,” Addison said. “In my house we know it’s not okay to ever pick up the phone in the car. We know the founder of Project Yellow Light,” he said. “That made a huge impact on all of us.” 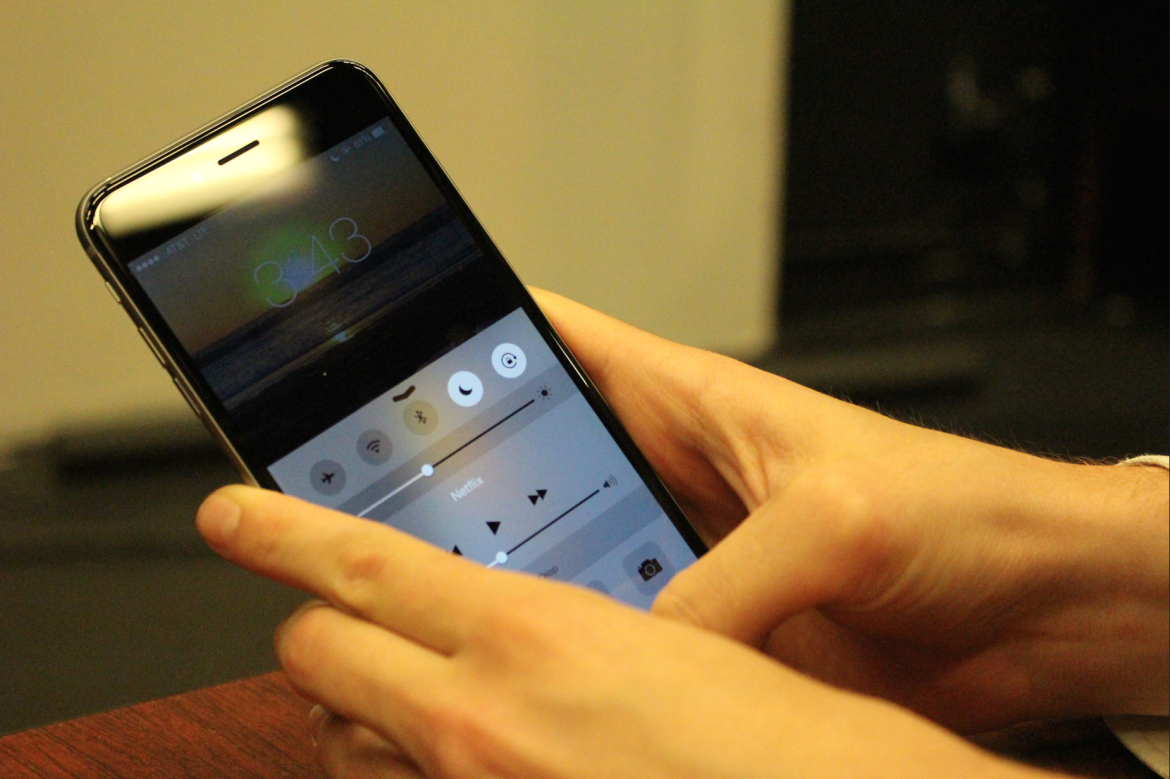 Addison shows how easy it is to set an iPhone to “Do not disturb mode” before driving, which means the phone won’t ring or vibrate. He said it is still possible to use the phone to play music in a car. “Teens don’t listen to the radio,” Addison said. “They use their phones to play music through the car.” Credit: Leslie Yager

Addison said that teen drivers are especially attached to their phones. “Phones have produced a whole new issue,” he said. “But also newer cars with their giant dashboard screens are a distraction. Some cars are programmed so you can’t use the computer in your console when you’re driving.”

This is the third year the Albano boys are involved in the race to benefit Project Yellow Light. A unique aspect of the race is that it draws teams from both private and public schools in Greenwich since Ben, who started the fundraiser, went to GHS, Addison attends Brunswick and Austen goes to King. Ben, who was featured last month on Greenwich Free Press, is currently running in the Battery Tender Mazda MX-5 Cup series. He has been involved with Project Yellow Light since 2012.

“Texting at a slow speed may seem easier than driving 130 miles an hour, but it’s not,” Ben said in a GFP interview last year. “And, If you’re driving 55 or 60 miles an hour, during the time it takes you to look down to check a message you’ll have had your eyes off the road long enough to cross the entire length of a football field.” 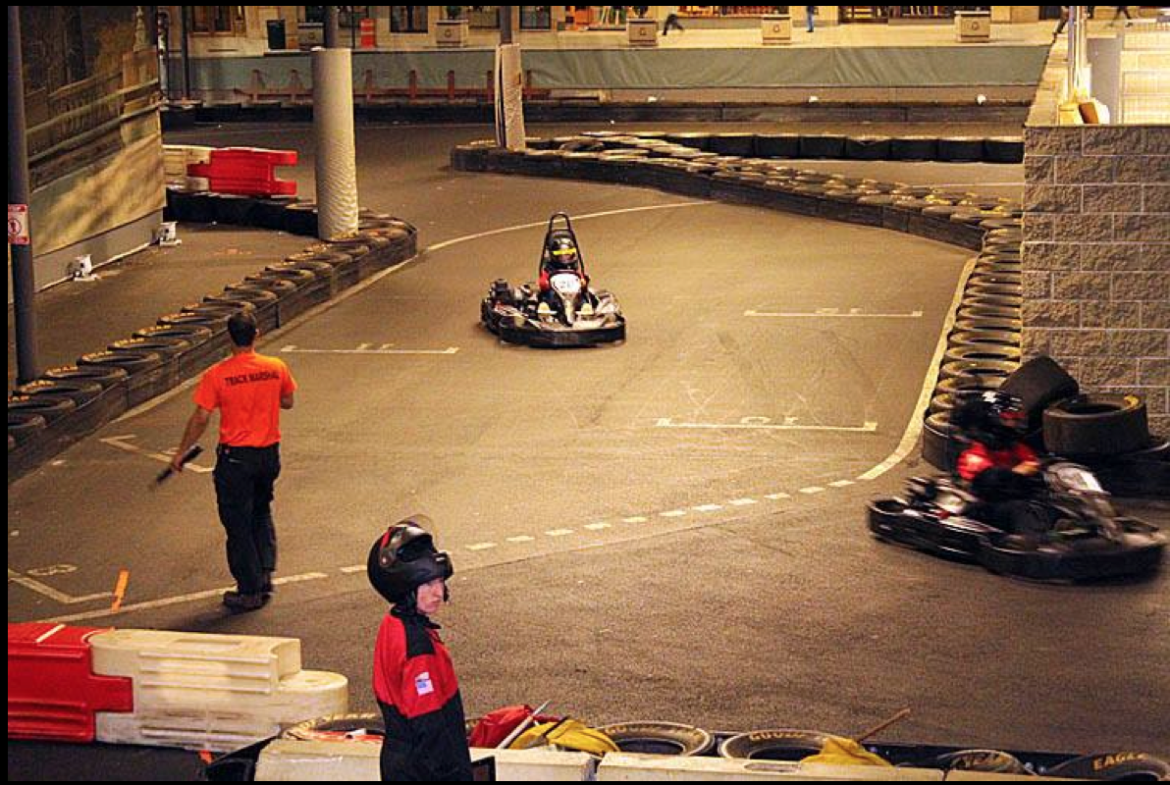 Project Yellow Light runs a competition for high school and college students who can submit video Public Service Announcement videos in a competition for scholarship prize money. The winning PSAs are adopted by the Ad Council and run on television. The goal of the videos is for entrants to create a video to encourage their friends
to avoid distracted driving.

Last year’s event raised $1,000 more than the 2013 race, garnering a total of $3,200 for Project Yellow Light. Teams of 2 to 5 drivers race to complete the most laps in the allotted time. Teams will compete for prizes, including seats in the Skip Barber Teen Safety and Survival School.

Project Yellow Light is a national scholarship competition designed to bring about change, in partnership with the Ad Council, Mazda, National Highway Traffic Safety Administration, National Organizations for Youth Safety and U-Haul. Applicants have a clear mission: encourage peers to develop and embrace safe driving habits. For both the high school and college contests, the first-place winners receive a scholarship in the amount of $5,000, second-place finishers receive $2,000, and third-place finishers receive $1,000. Project Yellow Light was founded in memory of Hunter Garner – a 16-year-old with a dry wit, wicked sense of humor, interesting creative mind, who loved music, running, and had lots of friends from all walks of life. Hunter died in a car crash on June 10, 2007 at the age of 16.

Ben Albano: Good Citizen Rests before Racing off to College