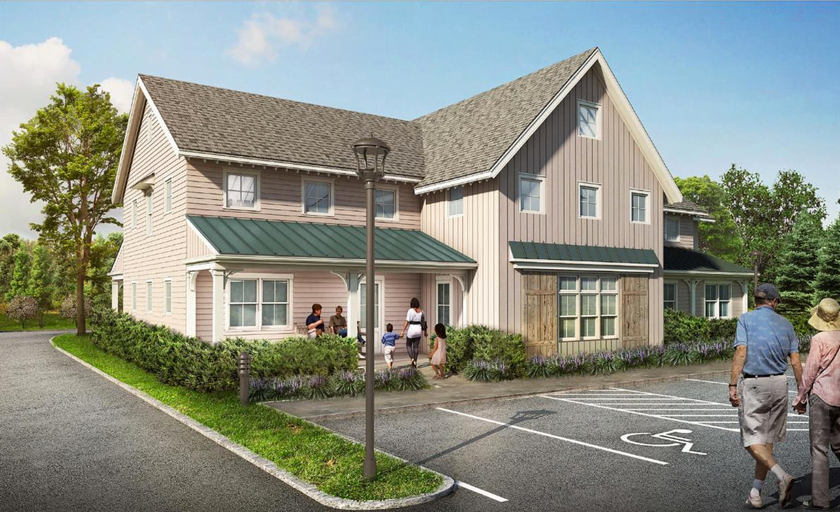 Neighbor to Neighbor announced that since they were cleared by the courts to proceed with plans for a new building at 248 East Putnam Ave, steps away from their current location, they anticipate breaking ground in spring 2020 and opening the doors of the new building by year-end 2020.

The 6,400 sq ft building will replace Neighbor to Neighbor’s current space, which is cramped and inadequate, with steep stairs and periodic flooding.

Operations will continue in the existing space throughout construction.

The building will house Neighbor to Neighbor’s food and clothing collection and distribution operation.

Back as far as 2015 neighbors from Putnam Park and Putnam Hill voiced objections to the proposed building, turning out in numbers at P&Z hearings, expressing concerns about noise from mechanicals, lighting at night, smell of dumpsters, noise of garbage trucks.

Melissa Klauberg, representing residents of Putnam Park, said the close proximity of the building would include loss of green space, increased chance of flooding, increased noise from the 300,000 meals provided annually, increased traffic from the 250 volunteers coming to the site, and decreased real estate values.

After neighbor after neighbor characterized the proposal as a “commercial operation” in a residential neighborhood, Nancy Coughlin, Executive Director at the time, disagreed, pointing out that the activities had already been taking place for 40 years at the church.

Ultimately the Planning & Zoning commission approved the proposal in October 2016, with conditions. Then chair Richard Maitland said the use in the building was for a charity permitted as a special permit use, under 6-94(b)(1).

Since Tomes Higgins House is located on the National Register of Historic Places, Putnam Hill District, the commission received comments from the Greenwich Historic District and the State Historic Preservation Office (SHPO) who found the design acceptable, and said the location would constitute no adverse effects to historic resources.

Neighbors filed a lawsuit that dragged on in court for two years before being dismissed, losing both in State Superior Court and in Appellate Court.

The modular building will be largely be prefabricated off-site and transported to Greenwich to expedite construction.

In a release, Neighbor to Neighbor said the building and landscaping design will blend with the Christ Church campus.

“The friendly, welcoming architecture of the new Neighbor to Neighbor building has been designed to be compatible with the surrounding neighborhood,” said Pam Kelly, Board Member and Chair of the Building Committee in a release. “We want to treat everyone with the utmost respect. That includes our neighbors, the environment, the church and our clients.”

The new building will be fully compliant with the Americans with Disabilities Act and will have sustainable design features, including energy-super-insulated building envelope, high-efficiency heating and cooling system, and LED lighting throughout.

The wallboard, flooring, cabinetry and most other building materials are made from recycled content.

Plumbing fixtures are all specified to be low-flow.

The house-like structure will be set back on the 10-acre Christ Church property, behind what used to be a carriage house.

The windows and some other elements match the historic Tomes-Higgins House, farther over on the property, with the intention of complimenting, rather than mimicking that building.

“I am thrilled to see the new Neighbor to Neighbor building proceeding ahead with construction,” said architect Rich Granoff in the release. “This important local organization will finally have a proper home to serve our community.”

Landscape Architect, Eric Rains said, “The edges of the property will be heavily vegetated with mature evergreens and deciduous trees.”

Rains and his team designed landscaping not only to screen and buffer between the neighbors, but to seasonally enhance the area.

“The blooms and leaves will mature and add visual interest all year round, blending beautifully with the Christ Church property,” Rains said.