The Greenwich Library Oral History Project has just published Arch Street Teen Center – Twenty-fifth Anniversary 1991-2016, a collection of interviews with State Senator Scott Frantz, Judith Donahue, teen center Director Kyle Silver and President of the Teen Board Alex Gibbons to mark the 25th anniversary of Arch Street Teen Center, which is the longest running teen center in the US. 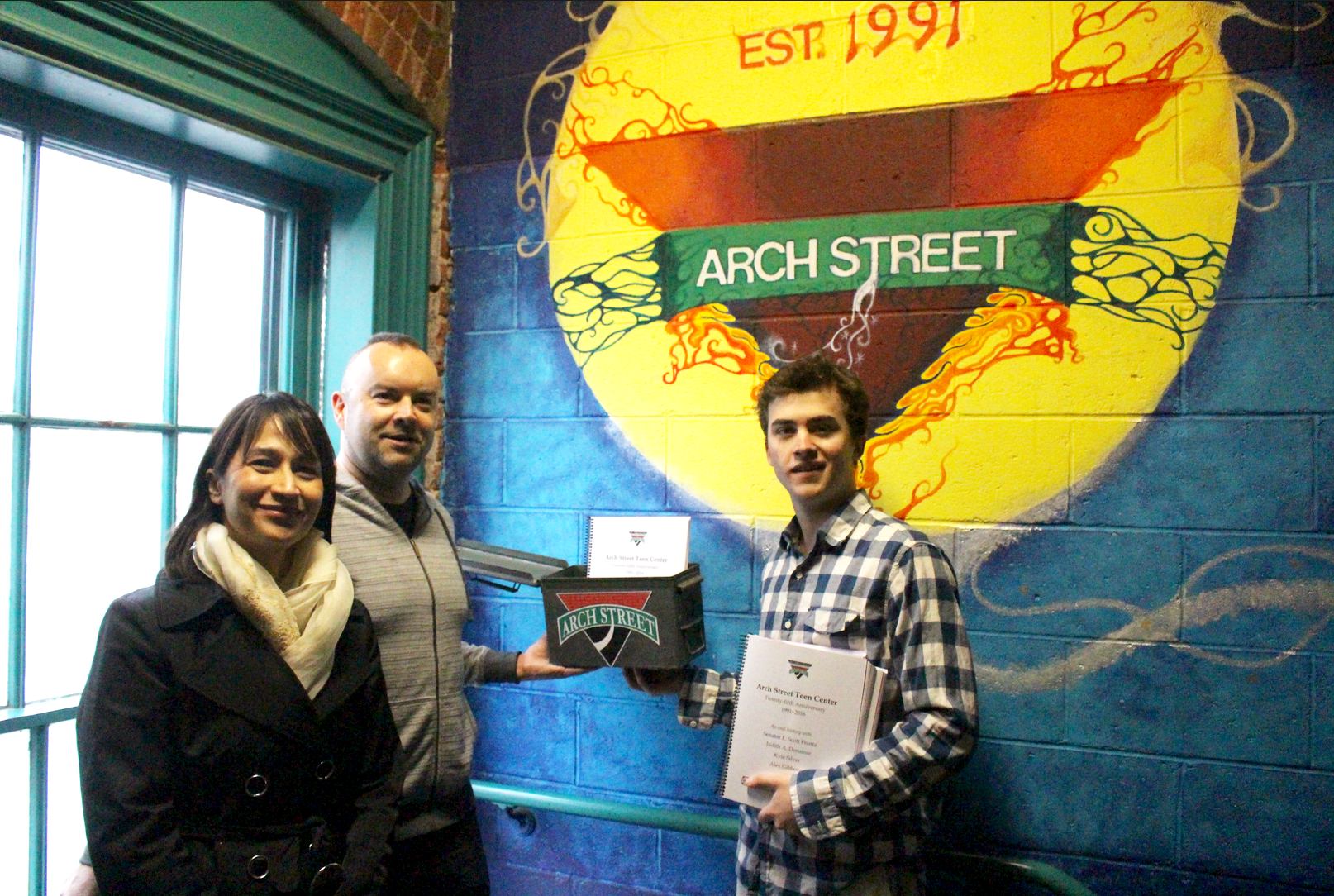 According to Senator Frantz, who championed the creation of the teen center in Greenwich, many teen centers have been created, but, sadly they often shutter after two or three years.

Not so for Arch Street. Dances often sell out and Mr. Silver estimated there are about 15,000 teens visits a year.

Arch Street opened in October 1991 inside the 1870 building that was originally a horse barn for the Bruce Family estate. More recently it had been used by Greenwich’s Dept of Public Works.

State Senator Scott Frantz said his involvement in bringing the teen center to life was personal.

Mr. Frantz’s brother was killed in an aviation accident when he was 22. Before he died, he had been moved by the impacts of risky teen behavior, having lost a girlfriend to a drug overdose.

“He had wanted to improve life for teenagers in town and not lose another friend to drugs or alcohol,” Mr. Frantz told Ms. Lux in his interview. “It was essentially suicide, and so that really got him angry about drugs and alcohol. So he, in addition to being his own vigilante in the parking lot of the high school, decided that there had to be some kind of alternative for kids other than on the weekends and after school engaging in real bad behavior in either vacant home or on the streets or whatever.”

Mr. Frantz became part of the group who pushed to create a teen center, partly in memory of his brother’s wish.

Judith Donahue, a fundraiser and longtime board member of the teen center, told Lux she had been recruited in 1985 to be part of a six month feasibility study, but that six months turned into six years.

She reflected the challenge of securing the building on Arch Street. “It lacked a functioning heating system and needed all new windows for starters. But DPW wasn’t eager to give it up,” she said. “Public works didn’t want to give up this building even though it was tremendously under-utilized and in terrible shape.”

Donahue said the project also had to go through Greenwich’s Parks and Rec Dept, which was run by Frank Keegan at the time.

“Frank Keegan was at first very much opposed to the teen center,” Donahue recalled. “I think when we had our first meeting with him he sort of threw us out on the street. ….but then he became one of our best supporters, and it was really quite wonderful to see that.”

Donahue said that in the 1980s, teens were loitering and getting into trouble on Greenwich Ave, which they made as their destination. “…they would just hang out on Greenwich Avenue to the point where the police were constantly shooing them, but where? To a house where there was nobody at home?”

“…you have so many kids that are just going off to vacant homes when they decide that someone’s going to have a party and they’re drinking and binge drinking,” Mr. Frantz recalled. “… And that we desperately need some kind of place like Arch Street to handle this problem.”

First Selectman John Margenot tried to broker a compromise and suggested building a new building in the existing parking lot.

“We raised funds to hire an architectural firm who did a beautiful model of a building right there in the parking lot and then there was a great deal of resistance to that because the park is there; we’re taking up space,” Donahue recalled.

Ultimately a compromise was brokered with with Public Works. Teen center dreamers built DPW a new building in Cos Cob in exchange for the one on Arch Street.

As for the Arch Street Teen Center’s longevity, Frantz said, “Teen centers don’t last. We did our research and it showed that the average length of a teen center’s existence was about two – less than three years because there would be a bad incident, there’d be no use, there’d be no interest with the kids and people wouldn’t go, and so they’d shut it down and use it for something else.”

Teen Center executive director Kyle Silver, in his interview with Ms. Lux, said “The building is a town-owned building, but the operating entity is completely raised by a board of directors.” In addition to paying for a new DPW building, the renovation of the1870 horse barn was costly, and included all new windows, a new heating system, and an alarm system. He said all programming and maintenance of the building are expensive and are paid for with private donations.

Donahue attributes success of the teen center to letting the teens drive the programming and that the center has stayed true to its mission of providing a safe, drug and alcohol free venue.

“Come on, we all know the nature of the beast,” Donahue told Ms. Lux, adding that the feasibility study identified the fact that teens had no place to go. “They (teens) are going to push the envelope and that’s their job. They just are. They’re going to test the limits. So it’s our job as parents to provide that safety net.”

Donahue said some incidents will be inevitable at the teen center, but that there are adults present and GEMS is on standby.

“I think, something that was not well understood is that sometimes the kids would come to the teen center and be… Have gone before somewhere and had something to drink. Some of them have come and they’ve been so intoxicated that the ambulance had to have been called a couple of times. And I think there are probably a dozen kids today who are alive because they came to the teen center,” she said. “I mean, if they hadn’t, if they’d gone off somewhere else, you know, they could be dead, because they ended up in the intensive care unit at Greenwich Hospital.”

Mr. Silver told Ms. Lux that there is a zero tolerance policy at the Arch Street. “It’s the one policy that we are not flexible on at all,” he said. “If you’re caught…if you arrive intoxicated or if you arrive under the influence, or if we feel that that’s the situation, we have a safety net that we provide.”

Mr. Silver said there is an “odd rule” in Connecticut where it is not illegal in CT to be intoxicated at any age, but it is illegal to possess alcohol or to purchase alcohol before the age of 21.

“So a student could have been at a sweet 16 party and had a glass of champagne there, arrives at Arch Street and then at the time if they’re not in possession of alcohol, it’s not illegal for that alcohol to be in their body,” Silver said. However, he pointed out that that scenario violated the Arch Street policy. Parents are called to pick up the child. If there is a safety situation outside the window of time for parents to arrive, they immediately send them to the hospital for evaluation.

Mr. Silver started working at Arch Street in 1991 as assistant director and moved into his position as executive director in 1997. He has overseen a transition from dances attended by 40 kids to dances that sell out at the fire code maximum of 400 kids.

Silver said a big challenge is creating programming that keeps up with the changing whims and tastes of teens.

“They have to be the ones that initially are engaged in creating it and being involved and making it happen, because if they don’t take ownership of it, then they’re not going to come,” Silver told Ms. Lux.

Silver said recently the teen center has been appealing to a younger demographic. In turn, there is early outreach to parents of 7th and 8th graders.

Mr. Silver said the opening of the teen center coincided with arrival of the internet and that teenagers are accustom to instantaneous, 24/7 communication and have an ability to multi-task. He said Greenwich teens grow up with tremendously high expectations and privilege that other may only dream about, both in terms of material and education. “College isn’t if it’s when,” he said.

Alex Gibbons, who was interviewed last May by Ms. Lux, is the President of the Teen Board at Arch Street. He started attending the teen center dances in 7th grade when he was at Greenwich Country Day School and enjoyed the chance to interact with people from other schools.

He said the paddle boarding and yoga and coffee shop attract public school kids, and that the high school dances are more popular among private schools.

“That’s just the demographic that it’s kind of fallen in with,” he told Ms. Lux. “We’ve got a dance this upcoming week, and if we sell out tickets, chances are most of hose are going to be Brunswick and GA students. That’s great because we get to sell out and we get to help all those kids, but there’s also a lot of kids that doesn’t speak to as much, and a big part of expanding our programing is trying to reach people at GHS. …we’re not going to the same sporting events or the same parties, and we don’t go to school together.”

The teen center oral history features four interviews conducted by by Renée Lux. Copies will be bound and on display in a carousel on the first floor of Greenwich Library. (For now, anyone who wants to read a copy should email the OHP office at [email protected]greenwichlibrary.org or call (203) 622-7945  and request a copy.