Jake Montgomery’s school bus picks him up across the street from Ada’s Kitchen + Coffee at about 6:45am, so he made sure to arrive in time for the eatery’s 6:30am opening to grab a quick hot breakfast.

The Greenwich High School junior was a frequent customer of Ada’s Variety when he was a little boy growing up around the corner on Chapel Lane. “I came here all the time for candy in grade school, but my mom cracked down a bit when I was at Eastern Middle School,” Jake said.

Jake was one of three people waiting in the semi-darkness outside Ada’s Kitchen + Coffee on Monday morning. When the front door was unlocked at 6:30am, the smell of fresh brewed coffee wafted across the porch as the trio stepped inside for their first glimpse at the renovation. 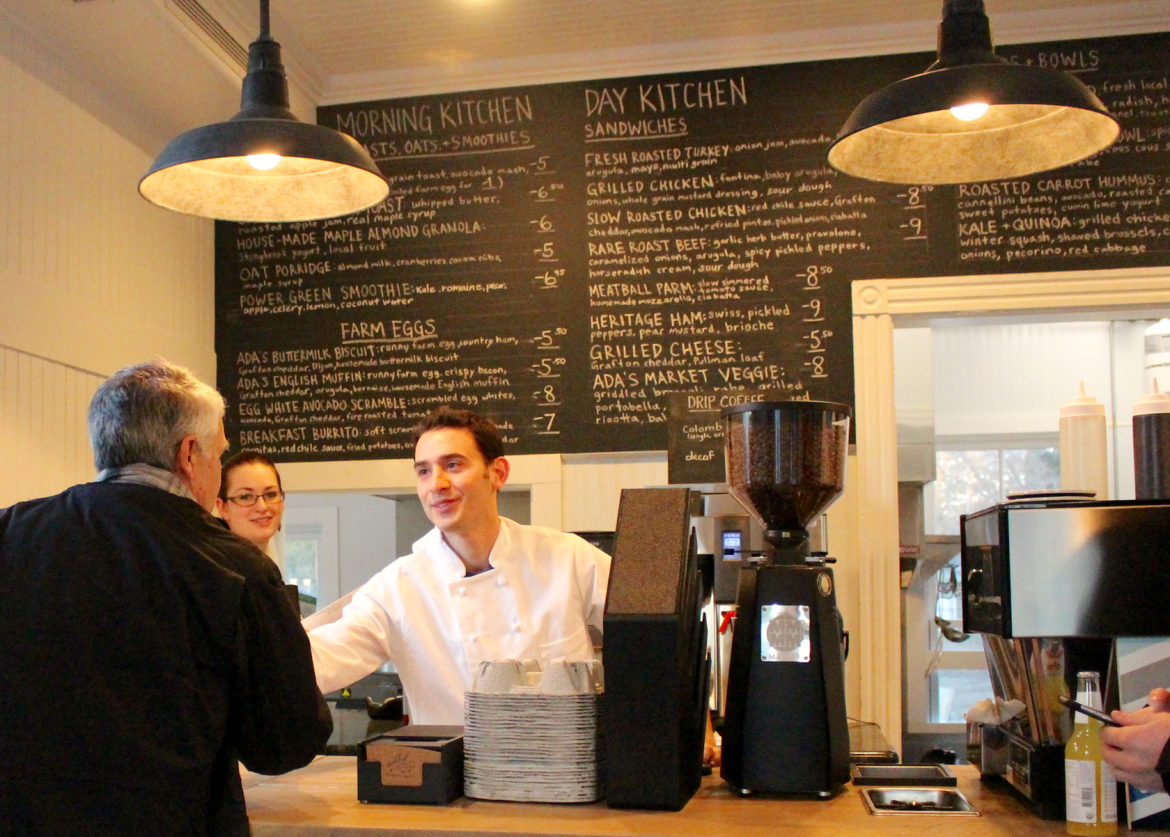 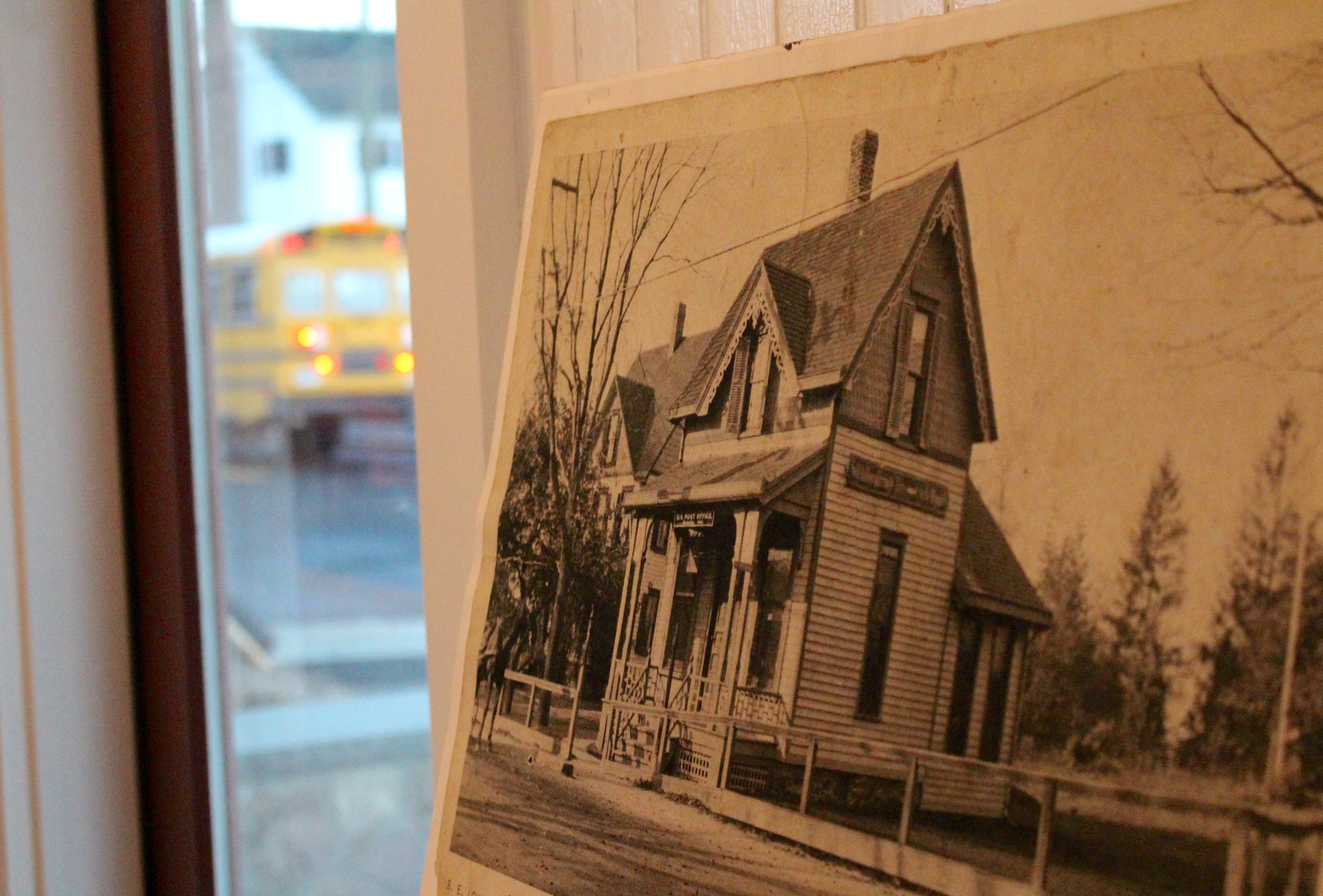 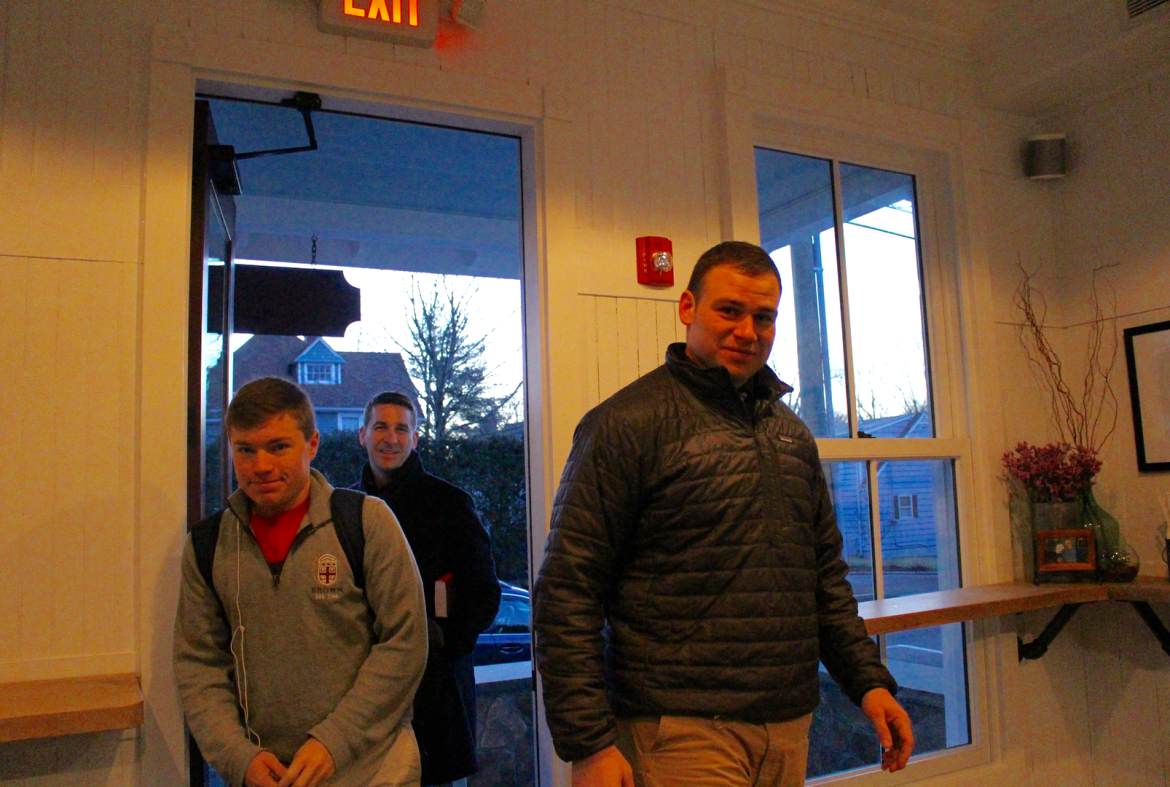 Jake Montgomery, Mike Schacter and DJ Stewart were all waiting in the semi-darkness in time for Ada’s Kitchen + Coffee to open at 6:30am on Feb.22.

“I grew up here and bought my penny candy from Ada,” Schacter said, recalling vividly his fondness for Sour Patch Kids.

The third customer through the door was DJ Stewart, who braced for the February cold in his navy pea coat, paperback in hand for the train ride to Grand Central Station. “I’ve been following the renovation,” Stewart said. “I’ve been waiting to see the inside.” 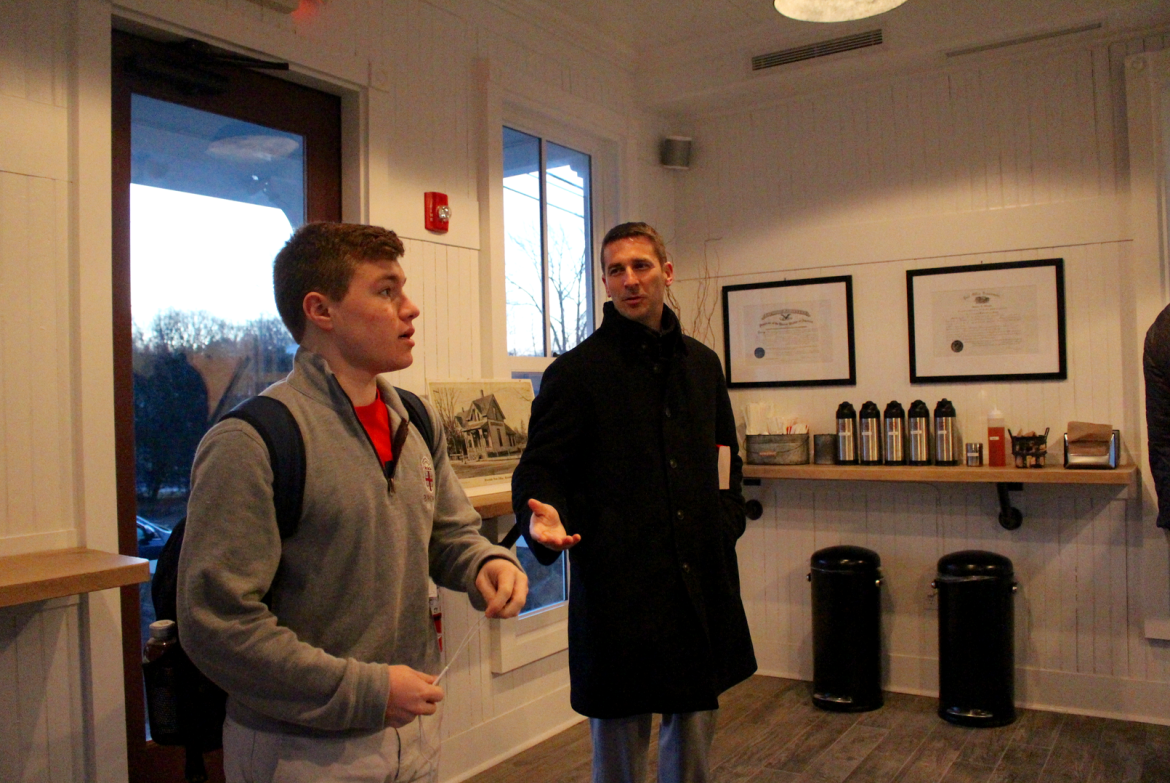 “The rosettes and wainscoting in the front room are all salvaged wood from the building,” said Ron Romaniello, Ada’s nephew, who oversaw the painstaking two-year renovation. As customers admired the historic post card of the building at 112 Riverside Ave when it was a post office, Romaniello shared a bit of history.

“The certificates of authorization for the post office were signed by five presidents including Teddy Roosevelt and Warren Harding,” Romaniello said, pointing to the framed certificates on the wall.

“Mike Gavan made the sign over the front door,” said Romaniello, referring to the retired wood shop teacher at Greenwich High School who stopped by several times during the renovation.

The interior was designed with the help of Chef Mike Pietrafeso’s friend and local interior designer, Katie Watson, owner of Watson Interior Design.

“I was so excited when my friends, Mike and Krista approached me to help them with this project because I grew up going to Ada’s,” said Watson. “My goal for the design of the space was to create an updated rustic interior with some industrial touches. I think we achieved the perfect balance of preserving the historic charm of Ada’s while adding modern touches.” 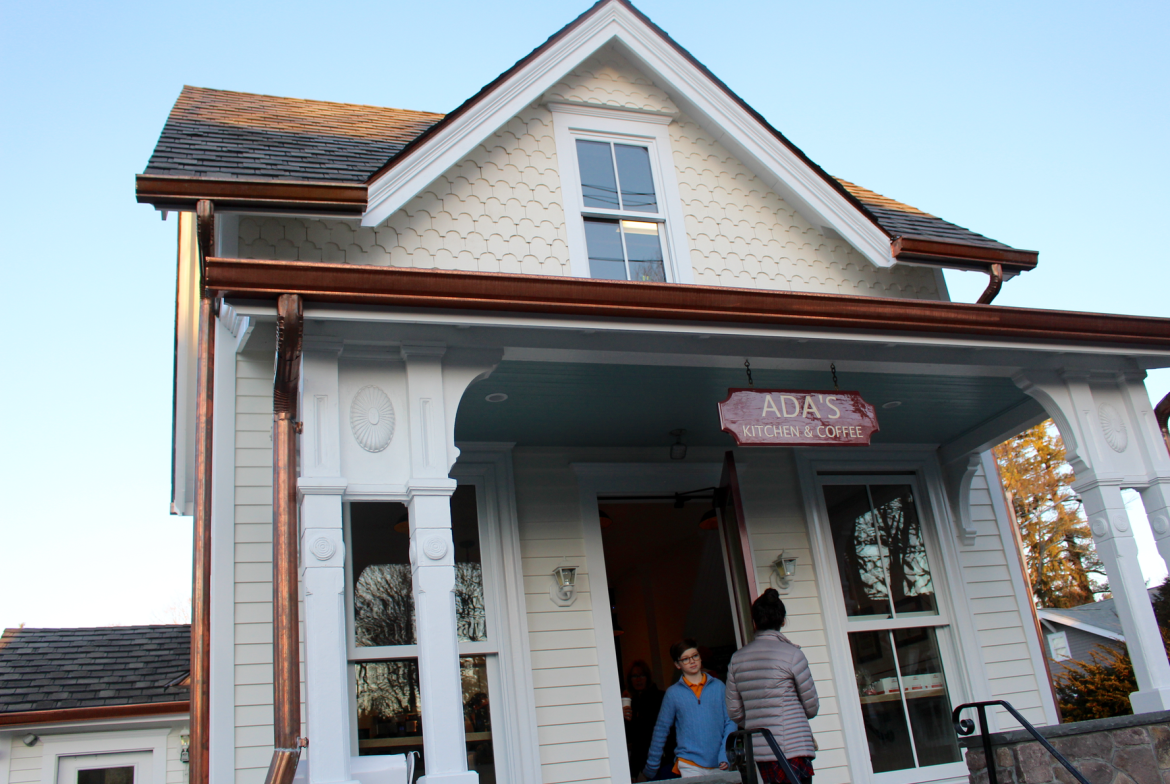 “He made another plaque we’ll display that says, ‘Take your time, hon,'” Ron added, referring to Ada’s reassuring words to children selecting their penny candy in the shop she ran for 58 years.

The renovated building has a storied history even before Ada sold newspapers and penny candy. “They built the post office in order to get the train station built,” Romaniello said. “If you look on the historic post card there is a sign on the side that says, ‘Solid rubber carriage tire and cycle repair,’ so they doubled it up as a post office.”

Augustino Cantavero, who was Ada’s father, (Ron Romaniello’s grandfather), bought the property from a woman named Louise McDonald in 1949, and converted it a convenience and variety shop. “We all called him, ‘Pop.'”

“He was a stone mason and a free mason,” Romaniello said. “I still have his stone mason tools. He  did a lot of the work around Connecticut, including the Guinea Road bridge on the Merritt Parkway,” he continued, adding that the new stone work that replaced the concrete slab out front does homage to Augustino. 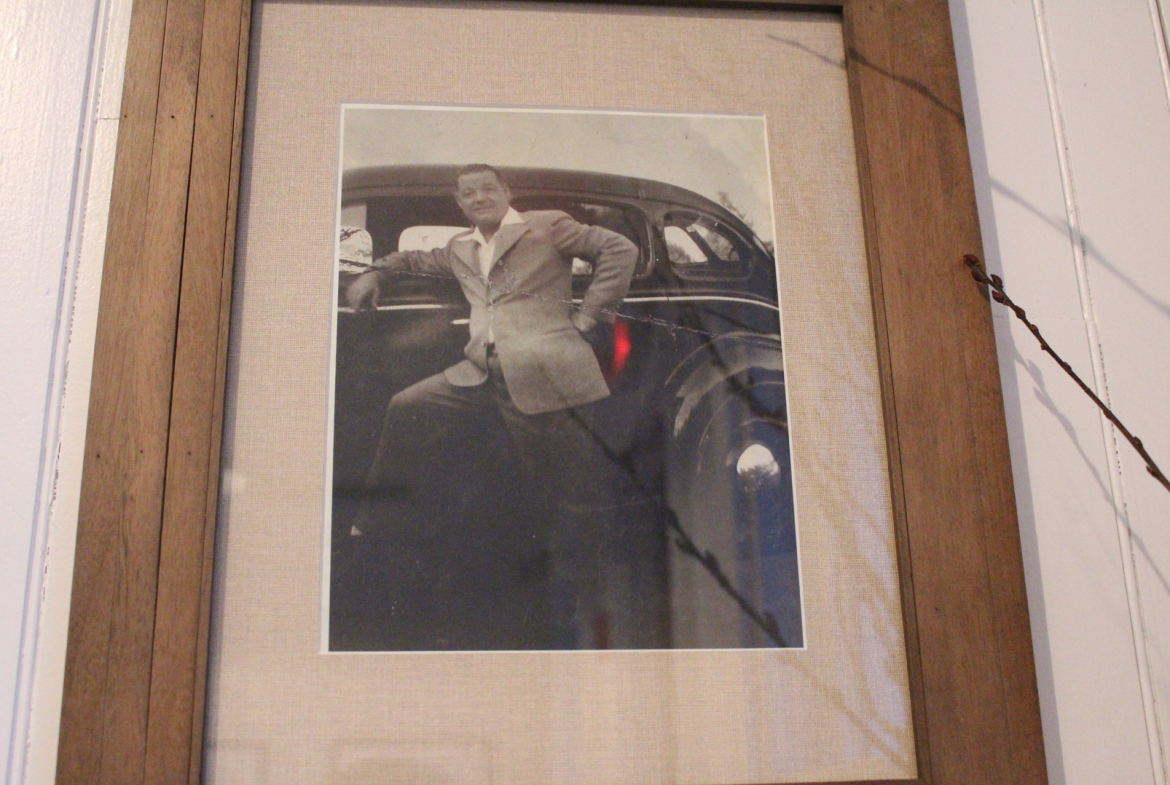 Riverside resident Leslie Bacon said she too had been watching the renovation unfold for the past two years and, along with friend Amy Friedman, was at Ada’s Kitchen + Coffee Monday morning for coffee and breakfast to take on a road trip. 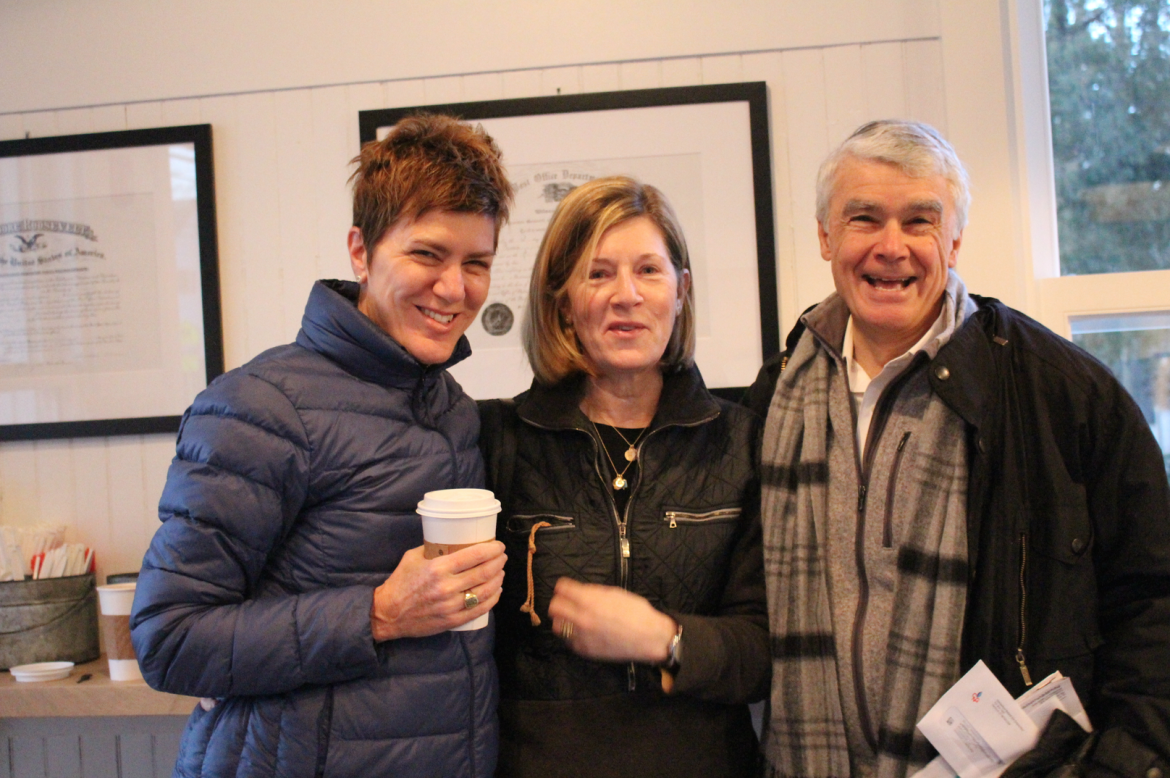 Amy Friedman, Leslie Bacon and Ron Romaniello were all smiles when Ada’s Kitchen + Coffee opened at 6:30am on Feb. 22, 2016 Credit: Leslie Yager 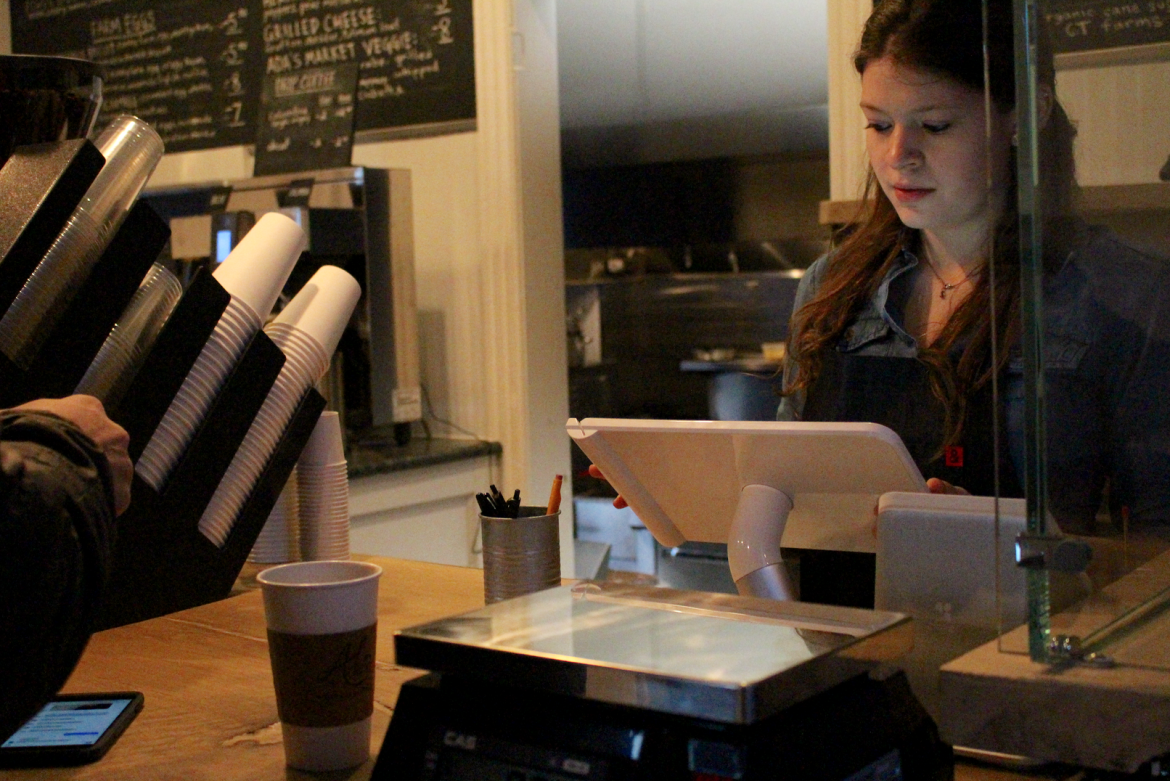 Behind the counter Krisztina Kocsis takes an order. She and Rhiannon Simpson were both busy the moment the doors opened to Ada’s Kitchen + Coffee on Monday, Feb. 22, 2016 Credit: Leslie Yager

Halloween at Ada’s: The Tradition is Alive and Full of Surprises