On Tuesday May 21, the managing director of Sandy Hook Promise Nicole Hockley joined a staff member and two Greenwich High School students on a panel hosted by the League of Women Voters.

Sandy Hook Promise is a non-profit organization created to see the signs and possible ways to prevent school shootings and suicides in high schools and middles schools across America. This organization is grassroots based, funded by generous donors.

Nicole Hockley said, “money shouldn’t get in the way of saving lives.” She explained that Sandy Hook Promise primarily works with students in grades 6-12 because this is an epidemic commonly happening within this age range.

The process is more a presentation that includes a 45-minute Powerpoint that goes over the do’s and don’ts when dealing with serious situations at school and how to tell an adult when something is wrong.

At the end of the presentation, every student is required to say the “Say Something” pledge aloud, where they promise not to keep quiet if they see or hear about something dangerous.

Arecco and Hockley enlightened the audience on two possible tactics to anonymously tell a trained professional. Sandy Hook Promise has an anonymous reporting system that is used frequently and seriously. Hockley said there are scarcely any false tips, and when there are, they’re obvious. 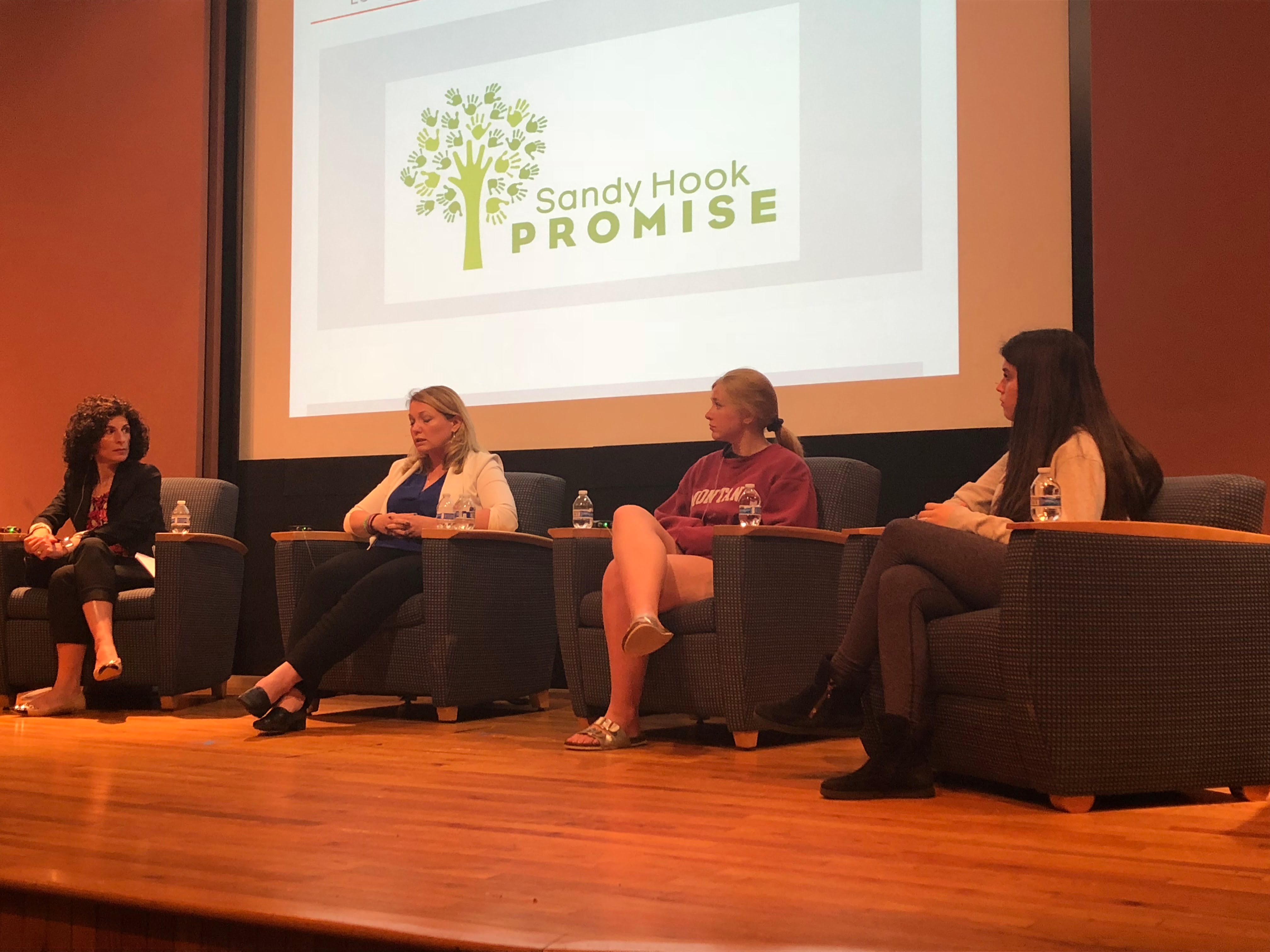 Similarly, Greenwich High School has “Anonymous Alerts.” Easily accessible through the school website, anyone student or staff can use this to report on any suspicious behavior that may be seen.

One of the students on the panel, Isabelle Harper, explained how she knew someone who used anonymous alerts once after a person in her class was spotted frequently looking up ways to purchase firearms during class.

Social media seemed to be agreed upon as the most valuable tool for a topic like this. Hockley explained how children use several different forms of social media on the regular and there are dangerous warnings posted that adult just simply won’t be able to see. She said that every time a school shooting occurs or is stopped, they wait to capture all the details because there is always at least one person who will post “I knew this would happen,” “I saw this coming,” or anything of the like.

Isabelle Harper addresses this saying that teenagers will either brush off warning signs as none of their business or not want to stereotype those with a mental illness. Hockley assures the audience, “[Sandy Hook Promise has] no desire to stigmatize people on the autism spectrum or those with disabilities.” Hockley doesn’t even use the word, “Mental illness,” believing it is quite offensive and misleading. She even says that most of the time those with mental illness are more likely to become victims rather than a perpetrator. Hockley says she would describe the people Sandy Hook Promise works with more as people who lack “mental wellness” rather than lumping them all in the category of “mental illness.”

The two students on the panel then recalled the moment two years ago, where Greenwich High School had an actual lockdown.

There was no active shooter in the building, but the students (and even most staff) were not aware of that yet. Emilia Thorton, a junior at GHS, said that experiencing the false lockdown was a slap of reality for her. She said she always envisioned herself as the brave hero who would knock down a shooter and save the day, but in that moment she felt scared and helpless.

Thorton praised the work Sandy Hook Promise does, saying she feels safer now that she is properly equipped with the skills and knowledge the “Say Something” training provided.

Thorton expresses that her only worry is the lack of action in terms of legislation, due to the current political divide in America. She understands that both Republicans and Democrats believe the issue is something that must be addressed, however with the lack of cooperation, nothing is getting done.

Nevertheless, when asked what they hope students and parents take away from this panel, every person seemed to have the same answer. That there is hope, and even if the government isn’t able to come up with a compromise, there are regular citizens and students working to resolve this issue and make the world safer. Hockley ends by saying, “It’s not just about fighting, it’s about keeping them safe.”