Boarding or day? Close to home or far afield? Coed or single sex? Big or small? These were some of the questions families were asking admissions reps from dozens of private secondary schools at Greenwich Education Group’s 9th annual secondary school fair at the Eastern Greenwich Civic Center on Tuesday night. 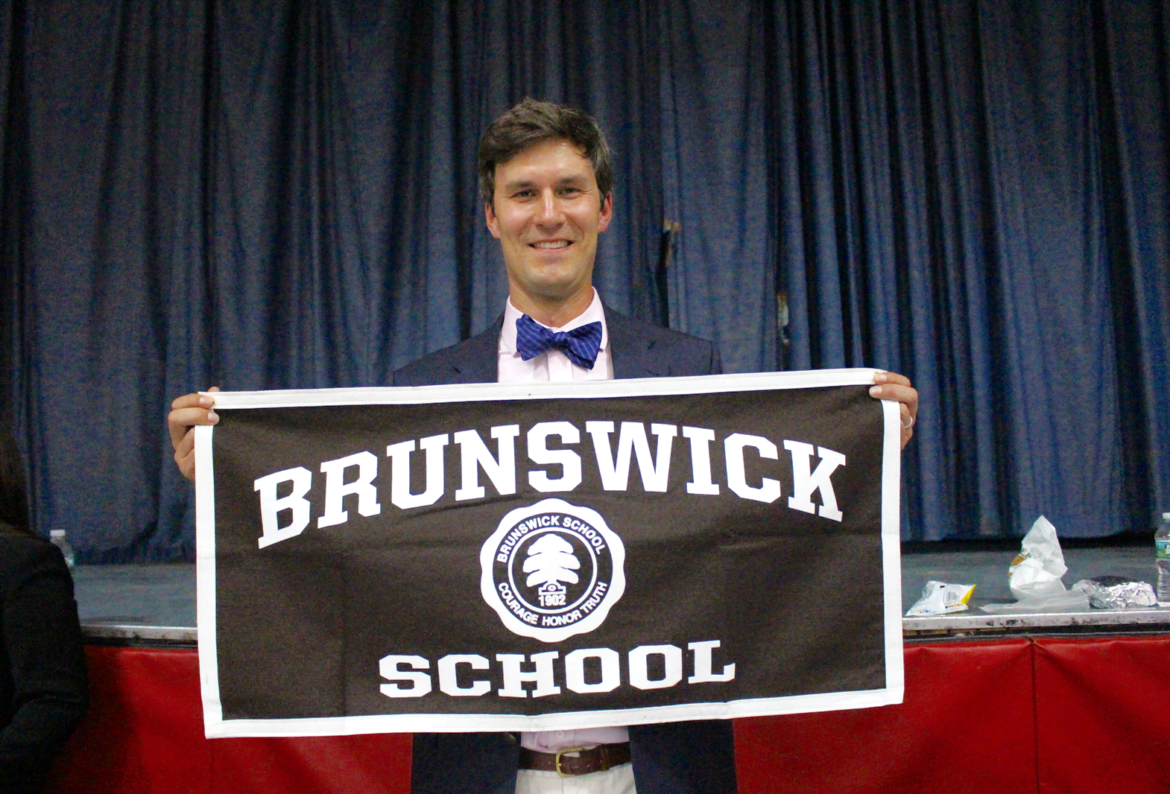 Founded in 1902, Brunswick School, a day school in Greenwich with an upper school enrollment of just under 400 students, 9th grade is typically the biggest entry point.

“Once in a blue moon we have space for a new senior,” said Rob Follansbee, the school’s Dean of Upper School Admission. Each class has about 100 students, but the freshman class is a little smaller, with about 92 or 93 boys.

“We don’t hold back spots for sophomores like other schools do,” Follansbee said.

At Brunswick, where the acceptance rate has been in “the teens” for many years, the ideal boy is someone who is properly motivated. The school’s motto is Courage. Honor. Truth. and an outsize emphasis is placed on character education.

“There is no cookie cutter definition of what that means,” Follansbee said.

Having taught previously at boarding schools, Follansbee described Brunswick as having the same sense of community as a boarding school. “At random times there are always students and teachers working on projects,” he said. “You don’t have to ask for extra help.”

Follansbee said that as Brunswick’s popularity has increased, so has their radius. Though the majority of boys are from Greenwich, there are students who travel from the Bronx and all the way up the line to Wilton and Ridgefield. “That they travel that distance makes you realizes how much they value the school,” Follansbee said.

As for single sex education, Follansbee said boys are behind girls during most of the development milestones from Pre-K to grade 8.

“The boys start catching up as teenagers,” Follansbee said, adding that Brunswick offers coed classes with all-girls Greenwich Academy during upper school. “It’s still a boy-centered environment even in the upper school.” 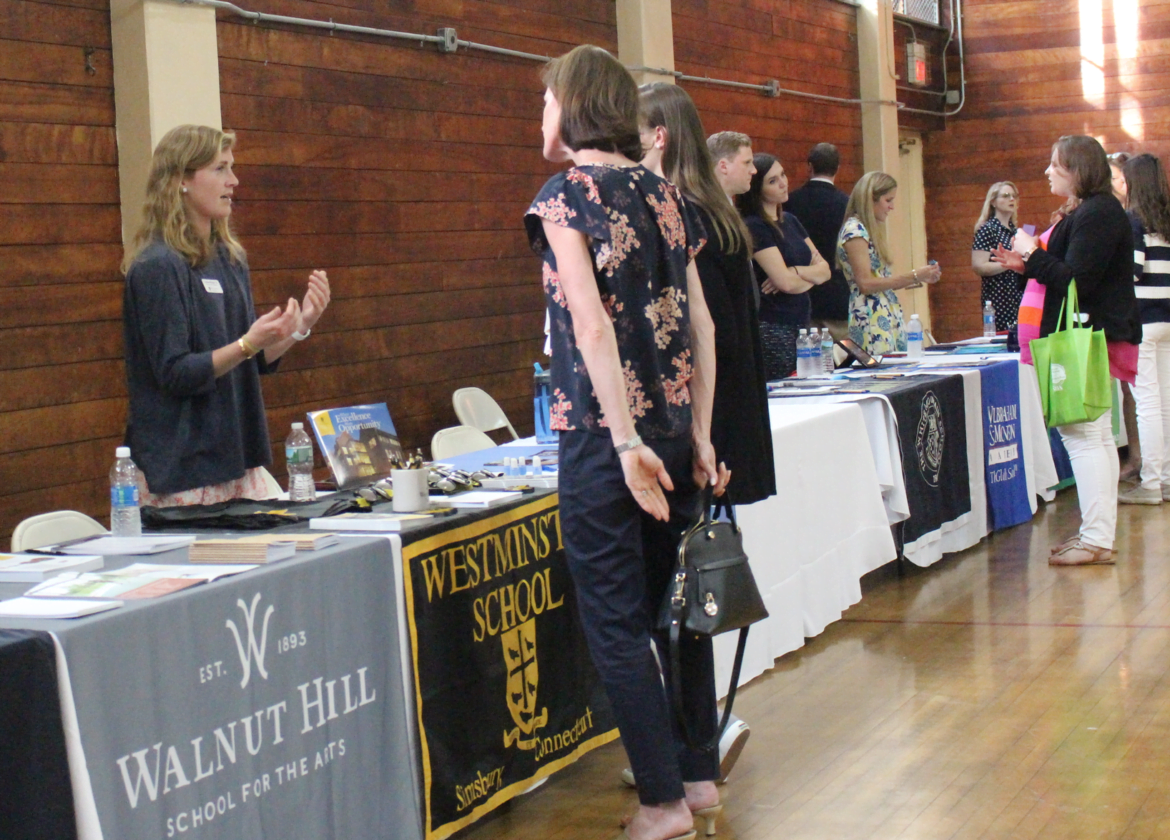 Families had a chance to meet representatives from dozens of private day and boarding schools at Greenwich Education Group’s secondary school fair. May 16, 2017 Photo: Leslie Yager

Kimberly Bastian said that at The Thacher School, located about an hour north of Los Angeles, California, where 90% of students are boarders. The school, which has an enrollment of 250 students in grades 9-12 including five or six from Connecticut, pairs every freshman with a horse.

The school is super competitive, with an admission rate of just 13%. The Thacher School is highly rigorous academically and puts a strong focus on character. Ms. Bastian said that is where learning to ride and take care of a horse comes into play.

Though 90 % of students have never ridden a horse before coming to The Thacher School, “We give every kid a horse in n9th grade,” Bastian said. “Some are excited. Some are terrified. But horses are smart. They meet adolescents right where they need to be met. None of your little tricks will work.” Bastian said that experiences teaches humility and cooperation.

Ms. Bastian said The Thacher School is similar in some ways to traditional boarding schools.

“It appeals to kids looking at places like Exeter and Deerfield, but have that spirit of adventure, and whose family is willing to consider schools beyond ‘the ten,'” Bastian said. 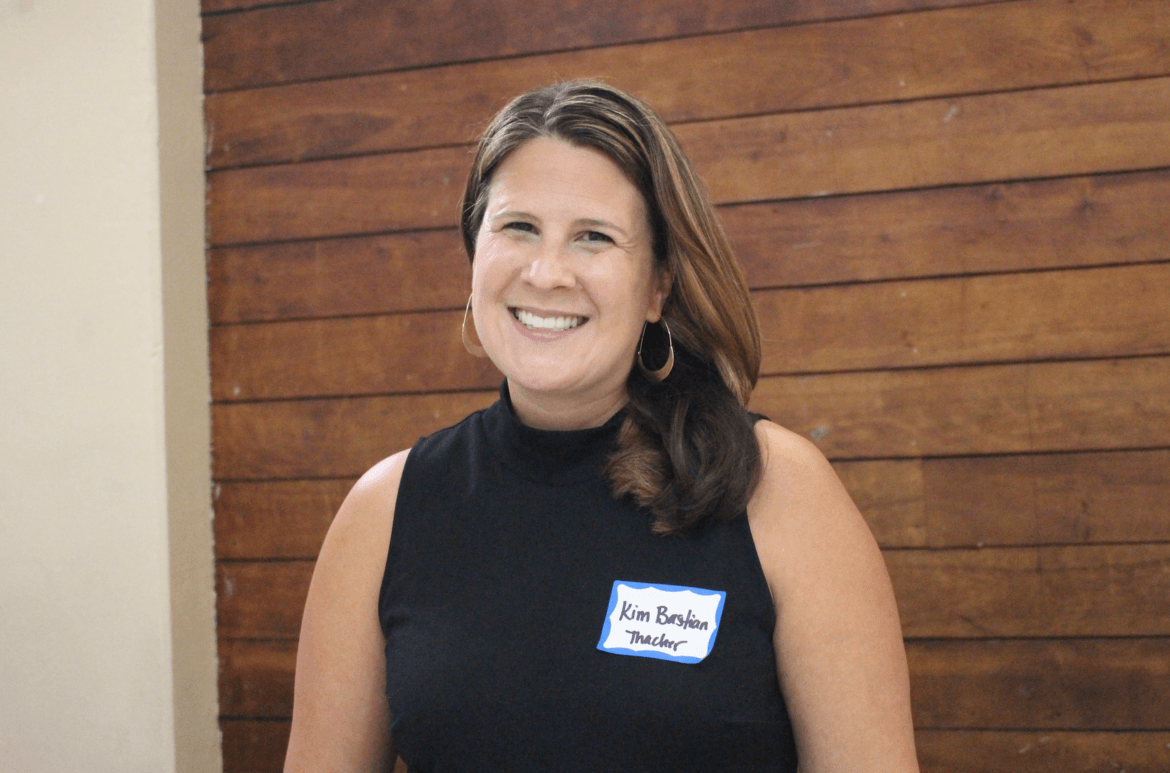 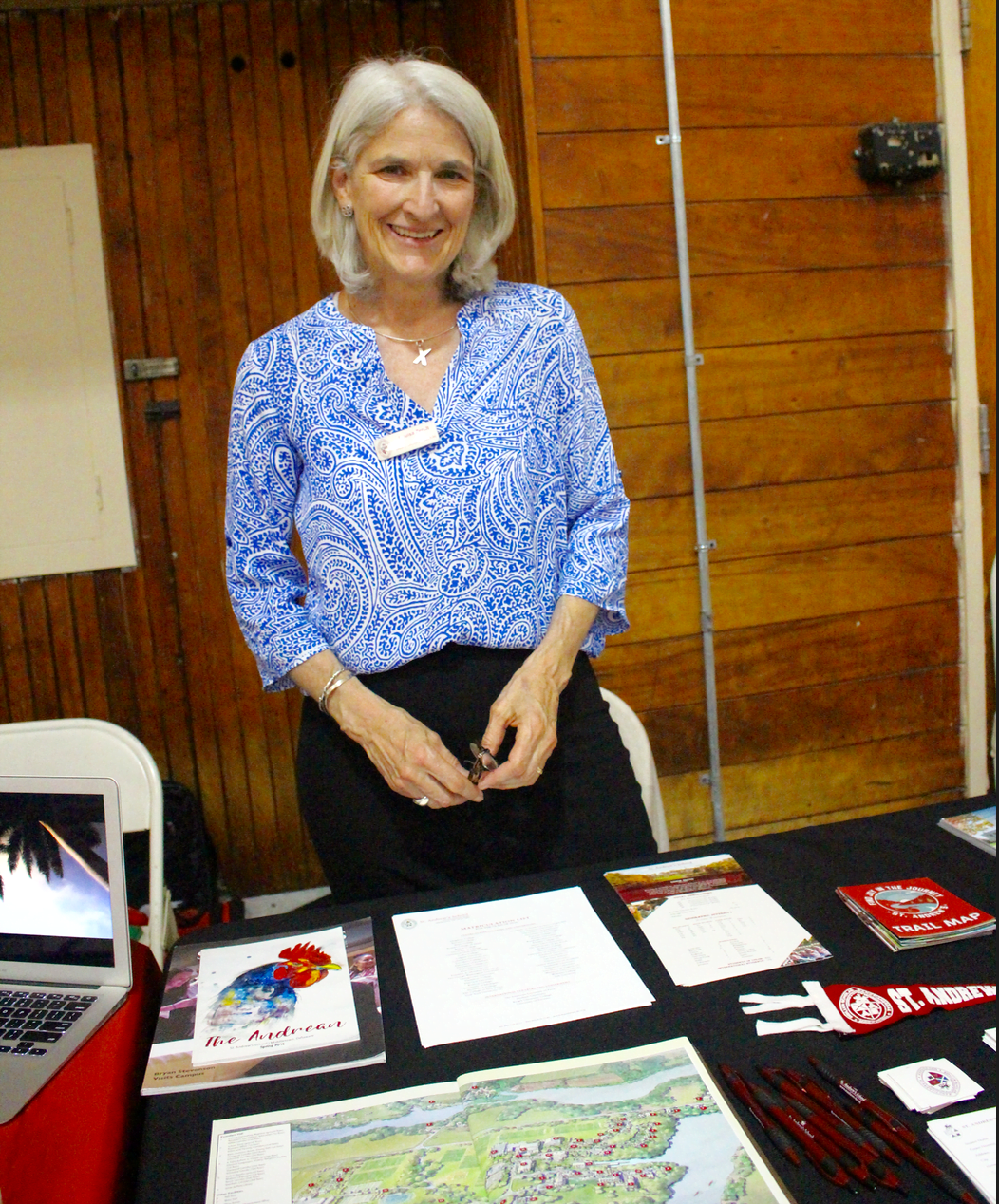 At St. Andrew’s School in Middletown, Delaware, Louisa Zendt, Dean of Admission and Financial Aid, said that though the campus is expansive, encompassing 2,200 acres and a large pond that has a six lane rowing course, the enrollment is small, with just 310 boys and girls.

“We are a school for all,” said Zendt. “We have needs blind admission and a culture of kindness.”

Zendt said children learn to take their great education and use it for good,” Zendt continued. Students are encouraged to be kind, committed members of the community at St. Andrews School.

The student body is small but very diverse. “The kids get to know everyone because the school is small,” Zendt said, adding that there is a 24% admission rate.

Since its founding in 1920, St. Andrews has had just four headmasters. The current headmaster, Tad Roach has been at the school for 37 years. 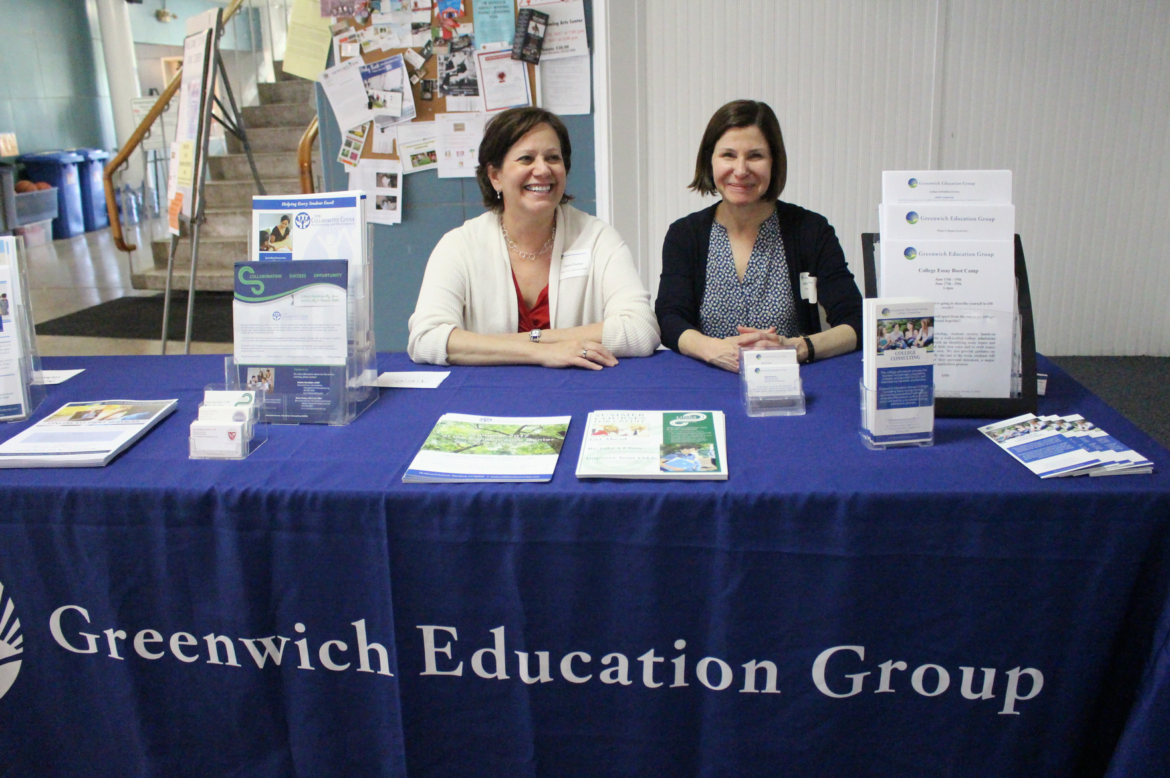 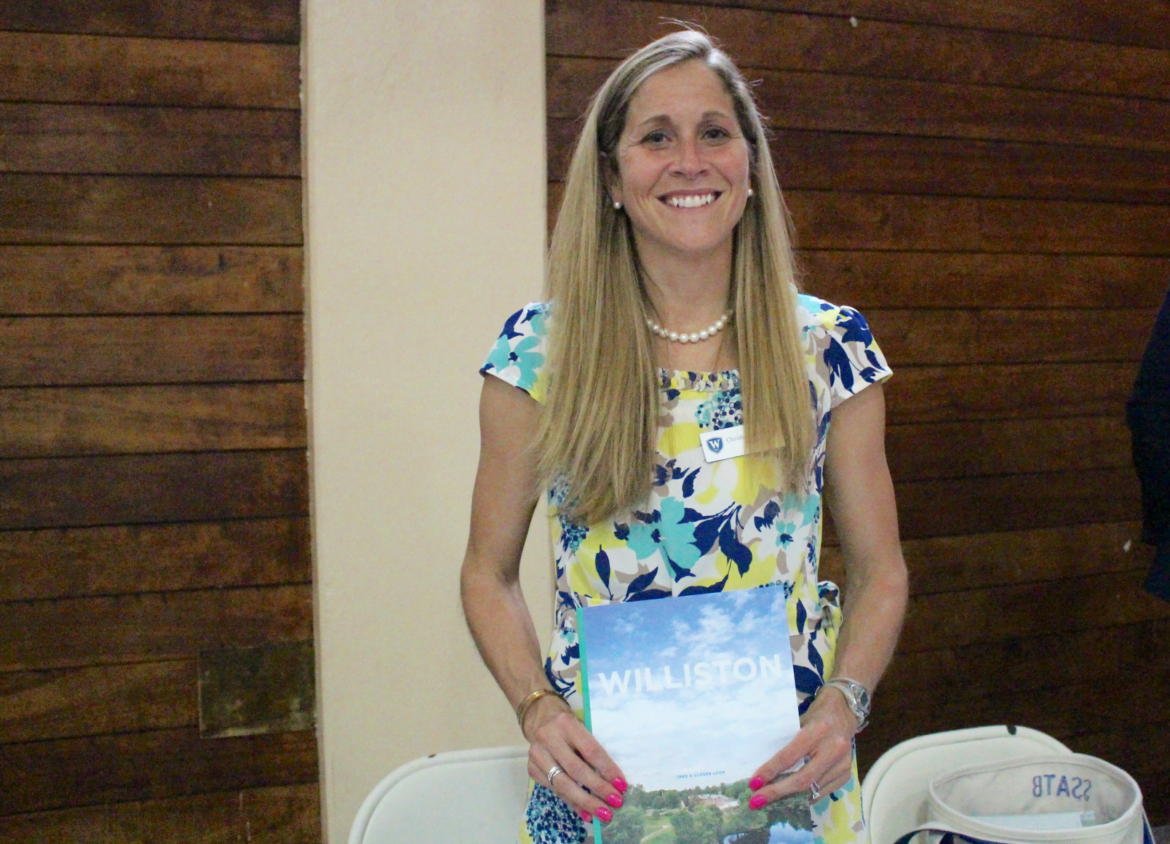 At Williston Northampton School in Easthampton, MA, Associate Director of Admission Christa Talbot said 70% of students are boarders and 30% are day students. Most students arrive in 9th or 10th grade, and there is a small post graduate program of 12-18 students.

The school’s location near several colleges – UMass Amherst, Amherst College, Mt. Holyoke, Smith College and Hampshire College – means students have the opportunity to do independent projects that connect them to a college professor. The colleges also provide a stream of expert speakers.

The School’s CORE program, which stands for curiosity, organization, reflection and empathy, supports students new 9th graders with an orientation trip when they arrive, followed by monitored study halls with a group of teachers who only teach 9th grade.

The CORE program also features class assemblies on topics such as time management, and health & wellness issues. There are also multiple social opportunities.

Ms. Talbot said the school’s financial aid budgets is generous, but that adds an additional layer of competitiveness for admission. 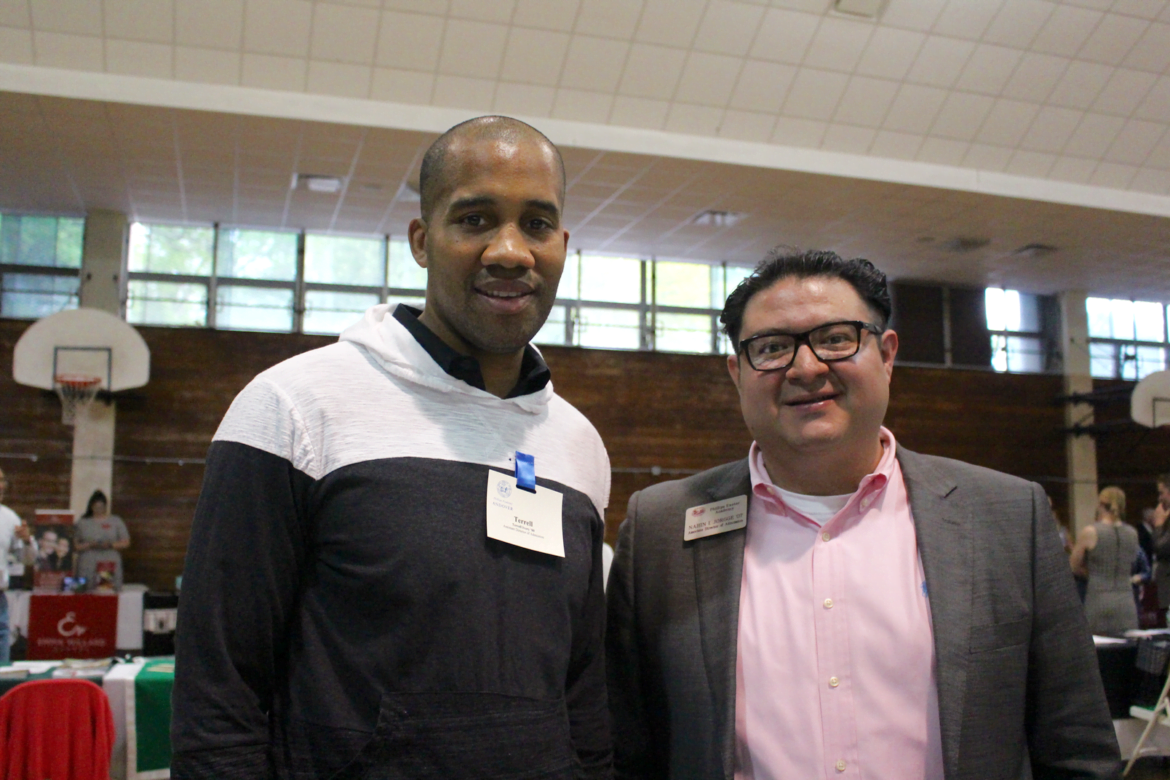 Terrell Ivory, the Assistant Dean of Admission at Phillips Academy Andover said his school, located in Andover, MA is just 45 minutes away from Phillips Exeter Academy in Exeter, NH. Both are members of the Ten Schools Admission Organization and share a website with Choate Rosemary Hall,  Deerfield Academy, The Hill School, The Hotchkiss School, The Lawrenceville School, The Loomis Chaffee School, St. Paul’s School and the Taft School.

Nahin Jorgge, Associate Director of Admissions at Phillips Exeter Academy said the school is coed and enrolls 1,060 students from 34 countries and 46 states, with the option of a post graduate program. The majority of students are boarders (80%), with 20% day students. The school, which has adopted the Harkness System, has 200 students in 9th grade and grows to 260 in 10th, 290 in 11th and 320 in 12th. The admission rate is 17%.

“If you’re looking for a wide range of opportunities, we have over 100 student activities,” Mr. Jorgge said. “We have 20 different sports and over 400 courses, including courses at college level, thought we don’t have AP courses per se.”

Mr. Jorgge said Phillips Exeter Academy is ideal for students who push themselves academically. The student to teacher ratio is five to one, with about 13 students per class. 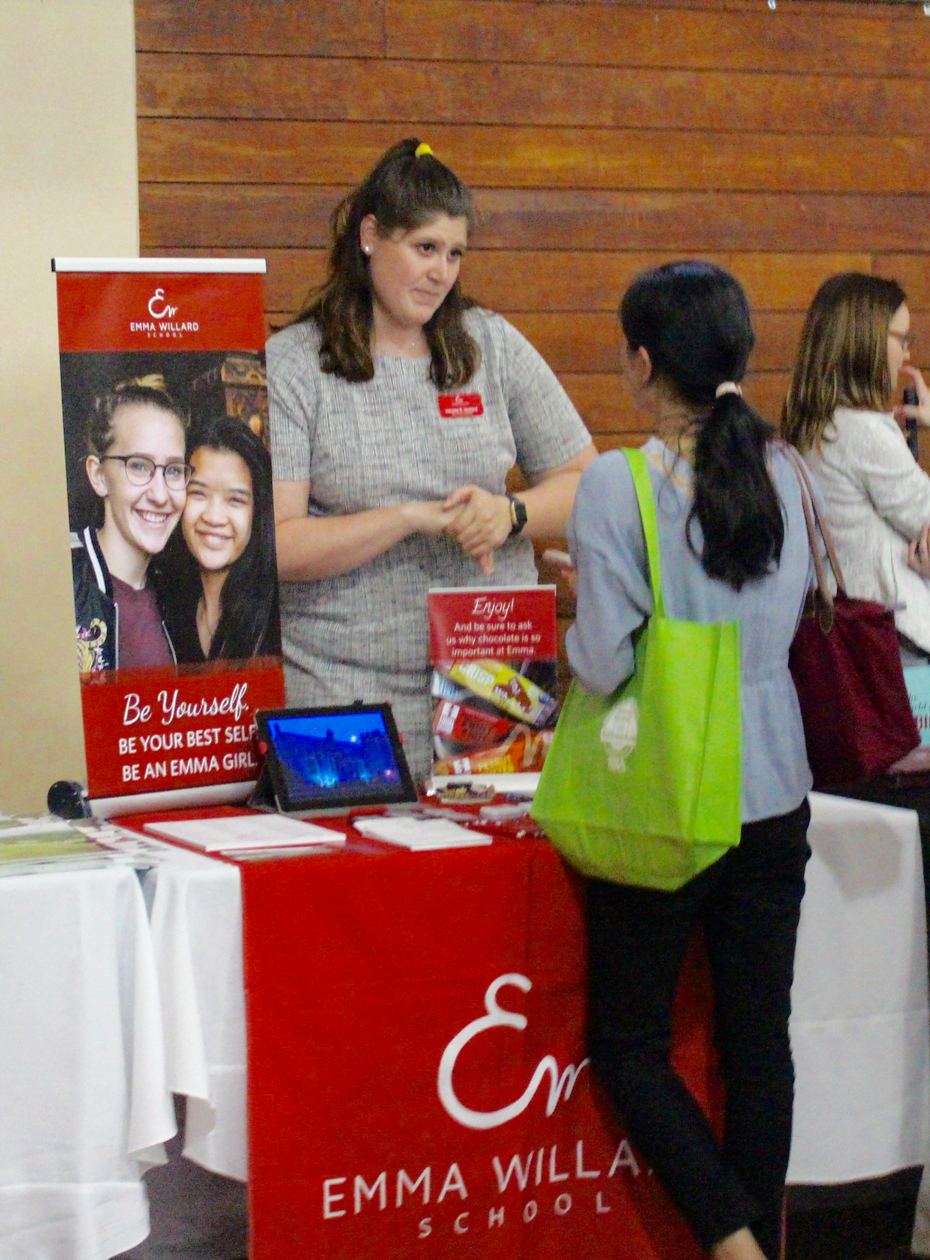 Mr. Ivory, from Phillips Academy Andover said there are 1,150 students in grades 9-12 and a post graduate program. “We’re a little bit bigger. We have about 300 students per class,” he said, adding that the admission rate is just 13% taken from about 3,000 applicants.

Of the school’s diversity, Mr. Ivory said there is a spectrum not just geographic – students hail from45 states and 45 countries – but also socio-economic, cultural, religious and ethnic.

“We look for kids who are motivated and talented in a lot of different ways,” Mr. Ivory said. “We have a little less structure because our kids are more ready to deal with responsibility.”

Mr. Ivory said that the ability to live away from home and experience diversity means students encounter others with different beliefs on certain issues. “It makes it a much more dynamic place,” he said. “The benefit is they are either independent or become independent. The preparation they get is so much better for college – you learn to speak up and advocate for yourself.”