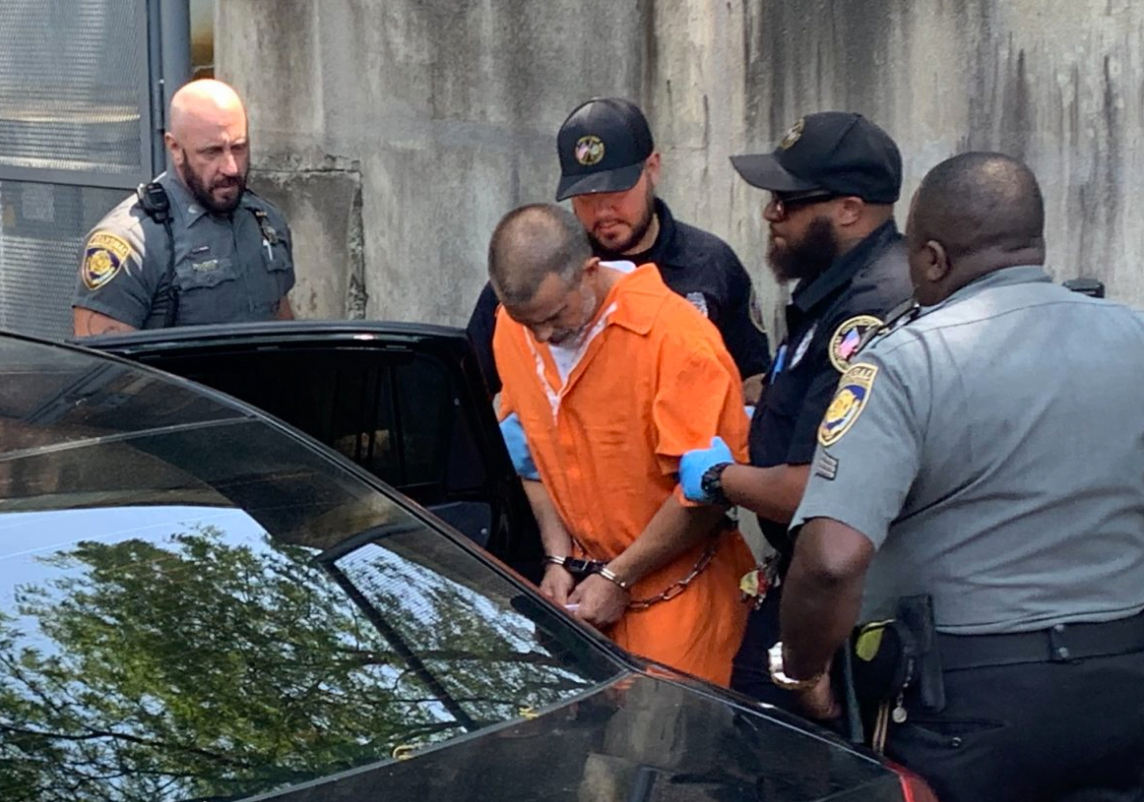 On the same day that police found evidence that Jennifer Dulos had been assaulted at her New Canaan home, phone location and video surveillance evidence shows that her estranged husband and his girlfriend steered a black pickup truck through north Hartford, making 30 stops to dump bags in trash cans and storm drains, including items that later tested positive for the missing woman’s blood, according to a state police affidavit.

In an arrest warrant application for felony charges brought against Fotis Dulos and Michelle Troconis, Connecticut State Police Detective John Kimball said that investigators on May 24 searched Jennifer Dulos’s New Canaan garage after friends reported her missing and found “multiple blood stains on the garage floor which tested positive for human blood” as well as “multiple areas of suspected blood spatter” and “evidence of attempts to clean the crime scene.”

They determined “that a serious physical assault had occurred at the scene, and Jennifer Dulos was the suspected victim” and the following day seized an iPhone belonging to her estranged husband, Fotis Dulos, during a meeting at New Canaan Police headquarters, according to Kimball, a 25-year veteran of the state police who works with the Western District Major Crime Squad.

A forensic search of the device, conducted with help from the U.S. Marshals Service, helped investigators sketch out the following timeline for Fotis Dulos and Michelle Troconis for May 24:

In some cases, “video showed items being discarded which appeared to be stained with a substance consistent with the appearance of blood,” he said.

“One video clip showed what appeared to be a Caucasian female with a thin build leaning out of the passenger seat of the Ford pickup and either placing something on the ground or picking up an item,” he said in the arrest warrant application. “This female was consistent with Michelle Troconis.”

In another video clip, the man can be seen dumping an item into a storm drain grate at Albany Avenue and Garden Street, Kimball said. Detectives were able to remove the grate and recover a FedEx mailer box that contained two Connecticut license plates that had been altered using tape and adhesive, he said. The original license plate—‘516WDJ,’ which belonged to a black SUV registered to Fotis Dulos—had been modified to read ‘5T6WBU,’ according to Kimball.

“Detectives checked the trash receptacles shown on surveillance and recovered garbage bags consistent with the bags shown on C4 video, closing with a blood-like substance, other items and household goods (e.g. kitchen sponge) with blood-like stains, and other items,” Kimball said in the affidavit.

At about 8:12 p.m., according to video captured on a next-door neighbor’s surveillance system, a “[m]ale matching the description of the male depicted in Hartford” pulled into the driveway at 4 Jefferson Crossing, walked to the mailbox, got the mail and “then got back into the Raptor and pulled further onto the property and out of camera range,” Kimball said.

A second video from a different neighbor showed the same, the affidavit said.

Many of the items recovered from trash receptacles in Hartford were sent to a Meriden-based Department of Emergency Services and Public Protection forensic laboratory for testing and they were “found to contain Jennifer Dulos’s blood,” Kimball said.

Neither Fotis Dulos nor Troconis have cooperated with investigators, he said.

A judge on Saturday signed a warrant based on Kimball’s application and New Canaan Police arrested Fotis Dulos, 51, and Troconis, 44, on felony changes of tampering with or fabricating physical evidence, and first-degree hindering prosecution.

New Canaan Police and Connecticut State Police are conducting joint missing person and criminal investigations, aided by local and federal law enforcement agencies. At the time of Fotis Dulos’s and Troconis’s arraignments in state Superior Court on Monday, investigators had not reported finding Jennifer Dulos. FBI officials could be seen helping with an ongoing search of Waveny on Monday.

Fotis Dulos and Troconis must surrender their passports and wear GPS tracking devices in order to be released on $500,000 bond, a state Superior Court judge ruled Monday.

Shackled and appearing small in stature among the marshals who escorted him into a crowded courtroom, Fotis Dulos said only “good morning” in reply to McLaughlin during his brief arraignment. He wore an orange jumpsuit that appeared several sizes too large for his wiry frame. 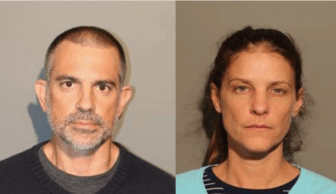 Troconis, who was arraigned after Fotis Dulos and also was shackled, appeared to be wearing the same horizontally striped shirt she wore in a mugshot released Sunday by New Canaan police, as well as black pants and sneakers.

Neither entered a formal plea. Their cases were transferred to state Superior Court in Stamford.

Bowman requested that Troconis’s bond be reduced to $150,000, and said her family had “come up here from Florida to be with her.”

In response, Vieux noted the “serious nature of the allegations” against Troconis and that there there’s “no difference” in seriousness between the two cases.

Jennifer Dulos, 50, dropped her kids off at school on the morning of Friday, May 24, and then disappeared. Her friends reported the mom of five missing at 7:30 p.m. and police quickly found her car parked Lapham Road near Waveny, just north of the Merritt Parkway.

Married in 2004, the Duloses had been in a contentious custody dispute since Jennifer Dulos filed for divorce in June 2017.

In applying for emergency sole custody of their children at the time, Jennifer Dulos filed an affidavit with the court that described her husband as vengeful and dangerous, and also referred to Troconis.

“My husband recently informed me that he has been romantically involved with Michelle ‘Michi’ Troconis Arreaza for the past year,” Jennifer Dulos said in her affidavit. According to Jennifer Dulos, Fotis Dulos told her that he would take two of their kids to Argentina, where Arreaza “has significant ties,” in order to “to be with his paramour” and Arreaza’s own child. Specifically, Jennifer Dulos said in the affidavit, the father of Arreaza’s child owns a ski resort in Argentina, and “[i]n the past, my husband has made references to disappearing to a ski resort, ‘where everyone wears masks every day and are indistinguishable from one another,’ ” she said.

Fotis Dulos denied the accusation in filing his answer. In seeking joint custody, Fotis Dulos’s attorney said he “has not made an definitive plans” to take their children to Argentina, “nor has he ever threatened to hide the children at a ski resort.”

According to Jennifer Dulos, her husband had told her in April 2017 “that he decided to move Ms. Arreaza and her daughter into the marital home, and enroll the daughter in the private school that our children attended the last two years.”

“He informed me that our children and I will continue to reside in the marital home every weekend and during the summer, so that we all (his paramour and her daughter included) would be together,” Jennifer Dulos said in her affidavit. “He also informed me that he will come and go from my mother’s residence whenever he wants during the week. Essentially, he expects to continue to exhibit complete control over me and the children.”

In filing his objection to the custody order, Fotis Dulos said he “has no present intention of moving Ms. Arreaza and her daughter into the marital home.”

About one month after Jennifer Dulos filed for divorce, the court ordered a temporary joint custody agreement. Yet in early 2018, a judge awarded her sole physical custody of the kids, court documents show, in part because Fotis Dulos was found to have exposed his children to Troconis during visits when doing so was disallowed.

At the time Fotis Dulos and Troconis were arrested, police listed them as having the same Farmington address, the one on Jefferson Crossing—a 10,000-square-foot house listed at $4.3 million.

Bowman indicated that Troconis would be able to make bond in Norwalk. Fotis Dulos left the courthouse in police custody.

In New Canaan, members of the community have held multiple vigils for Jennifer Dulos, holding out hope that she will be located. On Monday night, residents of both New Canaan and Farmington are planning to put candles out front of their homes to show that they’re thinking of Jennifer Dulos.

National media outlets, including reporters and those who work for TV stations, camped on both sides of Norwalk courthouse Monday, setting up for live broadcasts and shots of police transporting Fotis Dulos and Troconis to the Belden Avenue building for their appearances. A sticker affixed to one TV crew’s camera tripod read “Greatest Show on Earth.”

Police are asking for the public’s assistance in the case by using the New Canaan Police Tip Line phone number at 203-594-3544.