On Friday morning on his Ask the Selectman show on WGCH 1490, Peter Tesei reacted to the lawsuit filed  by the parents of Bart Palosz, who committed suicide on the first day of his sophomore year Greenwich High School in 2013.

Anna Izabela Palosz and Franciszek Palosz filed the wrongful death suit in Stamford Superior Court on Wednesday. The suit names the Town of Greenwich and the Greenwich Board of Education. 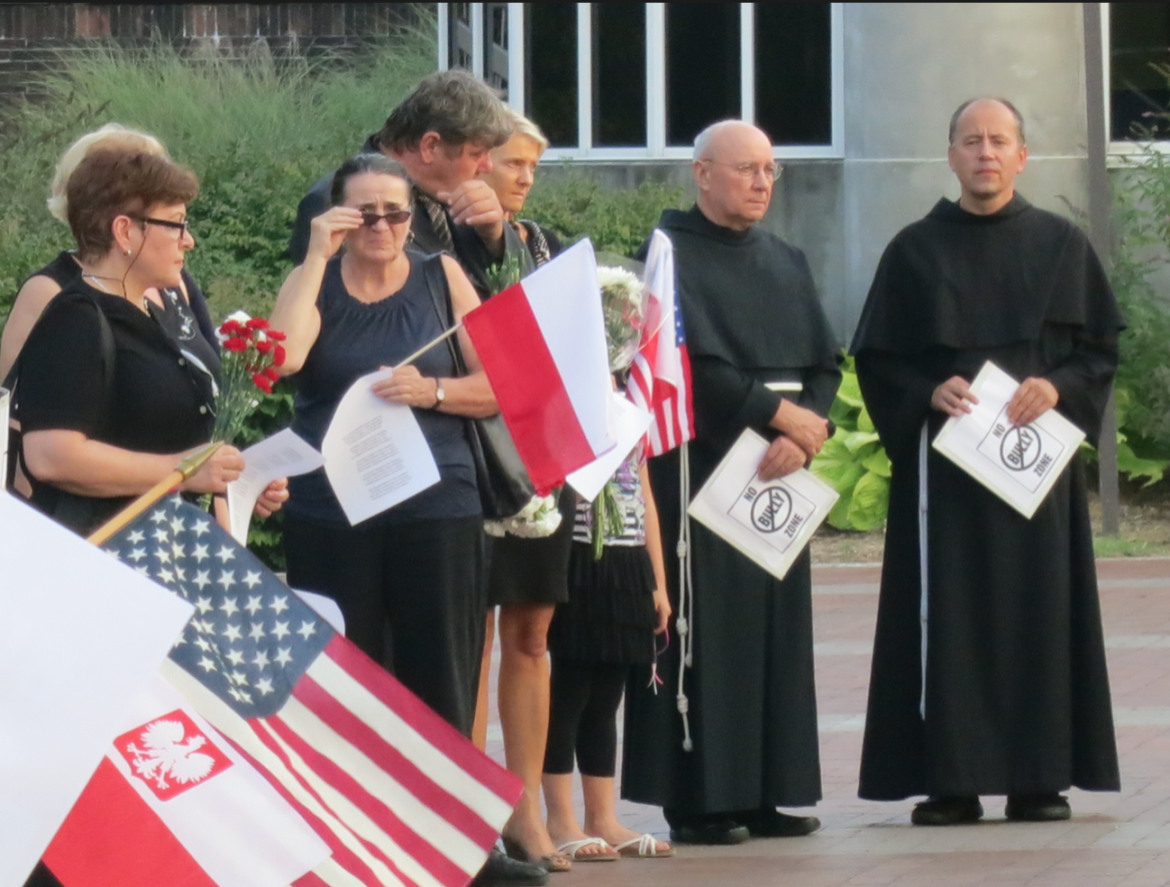 At GHS, hundreds gathered for a vigil in 2013 in honor of Bart Palosz. Credit: Leslie Yager

If Bart were alive, he would be a rising senior at GHS. The boy was bullied during his years at Western Middle School and Greenwich High School.

“The town continues to feel the emotional pain of such a tragedy with a young person,” Tesei said. “It’s a complex matter, with a lot of circumstances that have not been discussed in the public domain due to restrictions on dissemination of information related to a student,” he said, referring to Family Educational Rights and Privacy Act “FERPA.” Mr. Tesei said many of those details would come out if the suit goes to a trial.

The First Selectman said that a settlement with the Palosz family would require consensus among three of the Town’s governing bodies — the Selectmen, the BET and the RTM Claims Committee —  for a total of 25 people. Tesei said each of the three groups would have to come to majority decision on any matter of litigation.

“So far, looking at what they know about the case, which is not everything…. in decisions about litigation, each group has to, by majority, make a judgement one way or another,” Tesei said adding that in the case of the Palosz lawsuit, “there were those who felt the Town has a defensible position in the case and would like to see it adjudicated.”

Mr. Tesei said his understanding was that a statute of limitations was running out for the family to bring about a lawsuit, so the Town was not surprised this week by the timing.

“All I can say is it’s a complex matter and there is much more to this than has been reported. Those people on the other bodies (BET and RTM Claims Committee) want to have all of the facts discussed. It’s a very unfortunate time for our town, the Palosz family and the community,” Tesei said, adding that he was very limited about talking about the pending litigation. 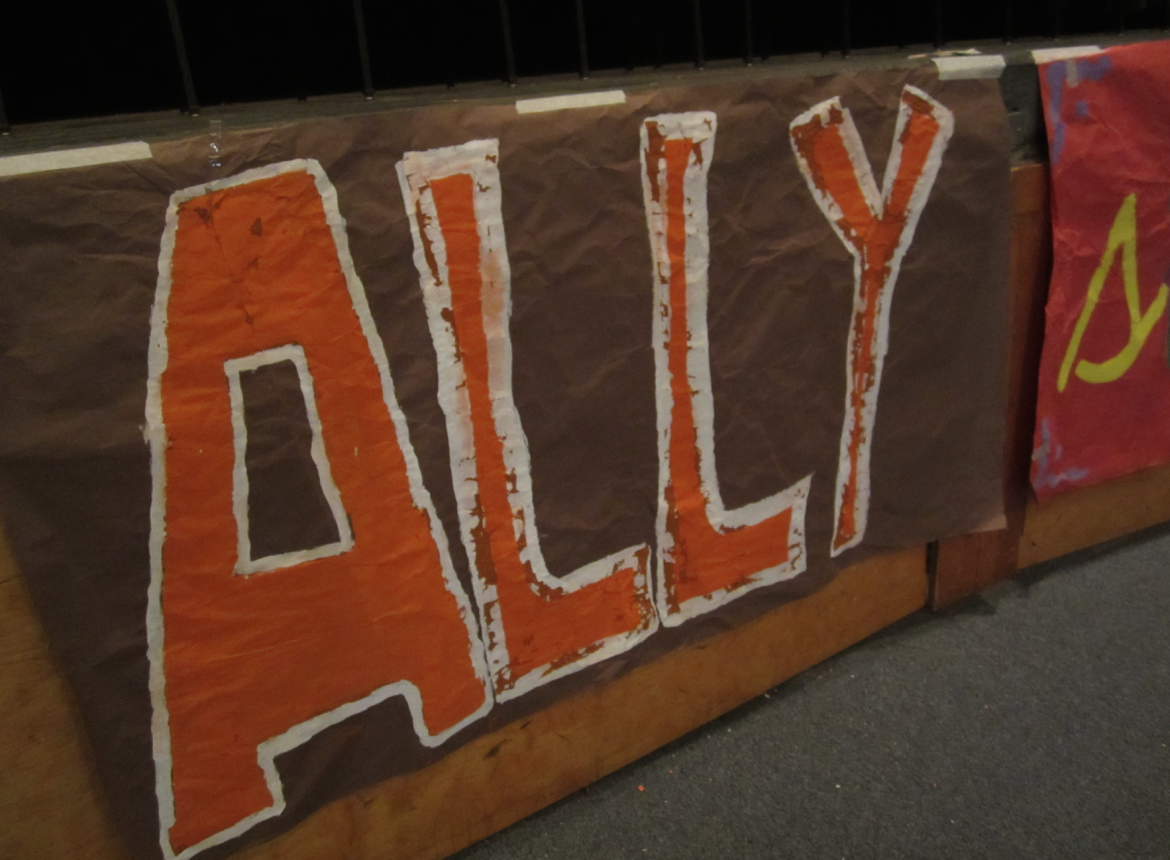 A poster in the auditorium on  Names Day at GHS in 2011. Credit: Leslie Yager

The tragedy of Bart’s death brought heightened awareness of the perennial problem of bullying, and the response gave rise to some encouraging anti-bullying efforts. The “District Norms” – Be Here, Be Safe, Be Honest, Care for Self and Others, and Let Go and Move on” – are ubiquitous. The Superintendent and GHS Headmaster Winters carry them on cards in their pockets. Events like “Be Here, Be a Friend Day,” were created to reinforce the norms.

At GHS, Elias Frank started a Facebook group called GHS Connections that blossomed into a club at the school. Elias’s goal was to work toward a bully-free environment where students feel safe to come to school.

Buddy benches at school playgrounds like the one at Julian Curtiss have popped up, and  a Facebook page was created called GHS Compliments.

At GHS, Names Day took on deeper significance after Bart’s suicide. The annual anti-bullying day, a rite of passage for freshmen, now in its 16th year at GHS, works to define perpetrators, targets, allies and bystanders. Names Day includes a session led by upperclassmen who relay their personal stories to an auditorium full of curious, but sometimes-suspicious freshmen. The event includes an opportunity for students to speak at an open mic. Many share the pain of having been bullied or apologize publicly for having been bullies. Some self-identified bullies even confess to having been bullied themselves. Others share their epiphany after realizing that playing the role of bystander can have almost as dangerous consequences as being a “perpetrator.” 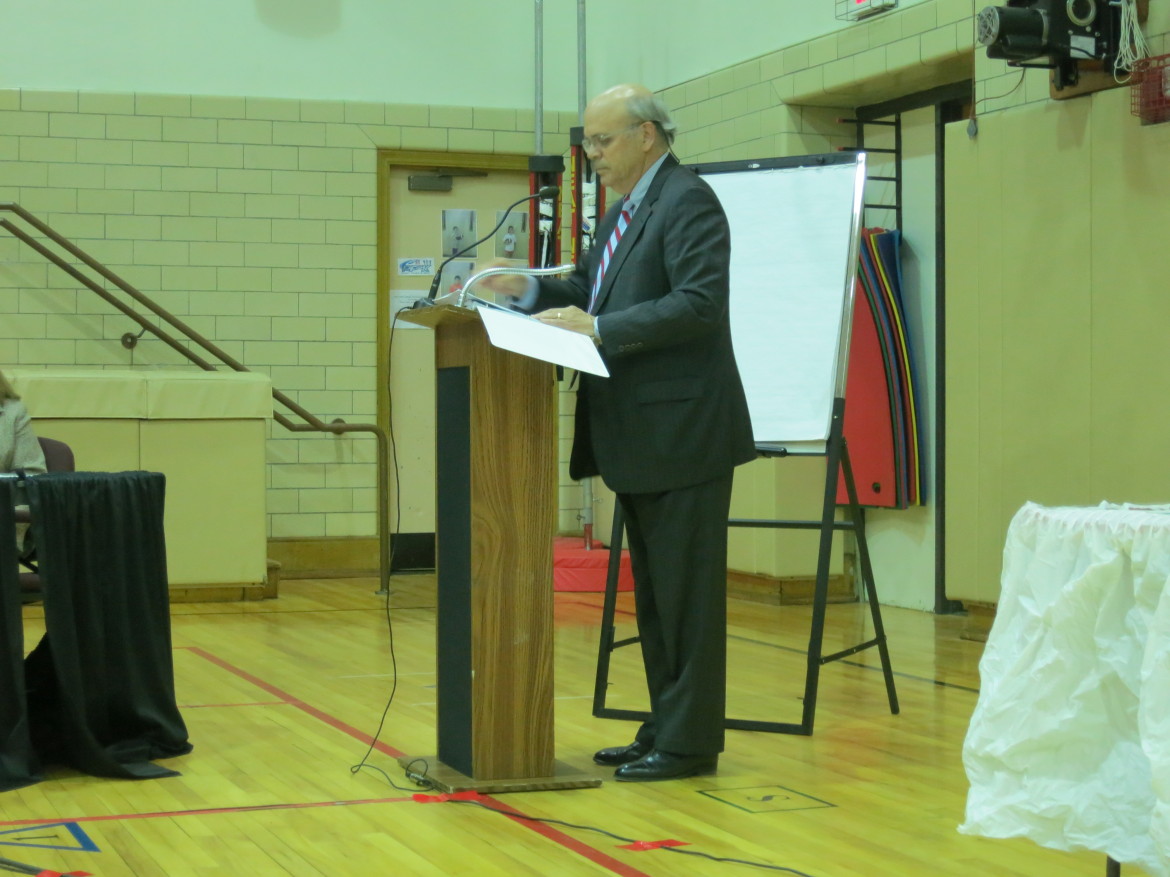 At the April 24, 2014 Board of Education meeting, Wayne Fox, Greenwich Town Attorney, presented his report on the investigation regarding the death of Bart Palosz. Credit: Leslie Yager

The Town conducted an investigation into Bart’s death and during the April 2014 Board of Education meeting, Town attorney Wayne Fox’s delivered a report.

“There have been many claims, suggestions and innuendos as to what occurred to this young man,” Fox said, but that his office had not set out to find fault or defend anyone. The town attorney said that the investigation revealed Bart was subjected to ridicule, humiliate and intimidation.

Mr. Fox said a number of documents pertaining to Palosz over his years in Greenwich Public Schools were routinely discarded as Palosz moved from grade to grade and school to school. About 30 to 35 people were interviewed “to verify and clarify information,” and hundreds of documents were reviewed, including emails, reports, memos and Palosz’s scholastic records.

Fox explained that FERPA protects the privacy of a student’s records, even in death and that the parents may exercise those rights as long as the records exist.

“We have not had the opportunity to speak with the family,” Fox said, adding that without the approval of the family, the Town cannot release the results of the investigation to the public.

Fox said it was clear after his investigation, however, that Palosz “was subjected to acts by students or groups of students directed against him with what I would define as an attempt to ridicule, humiliate or intimidate him.”

“The school system had been aware of the difficulties, was attentive to them and set up procedures and programs in attempt to address them,” Fox said back in 2014.

If the Palosz family’s lawsuit goes to trial, the school system’s procedures and programs will likely be elaborated on.

Bullying in Greenwich Schools: Is it Getting Better?

YikYak has breached the iPhones of GHS.