Congratulations to the seven PTA Council Essence Award Nominees for 2015 who were were honored on Thursday at the Havemeyer building. Mike Trogni, PTA Council president-elect, thanked everyone who took the time to write thoughtful nominations of volunteers. The turnout for the ceremony was larger than expected and once the seats were all taken, the audience stood across the back and side of the room.

Mr. Trogni called to mind a phrase Dr. McKersie uses, which he called the Three T’s.

“He talked about his appreciation of our parent volunteers and their donation of their time, treasure and talent,” Mr. Trogni said, referring to Dr. McKersie. 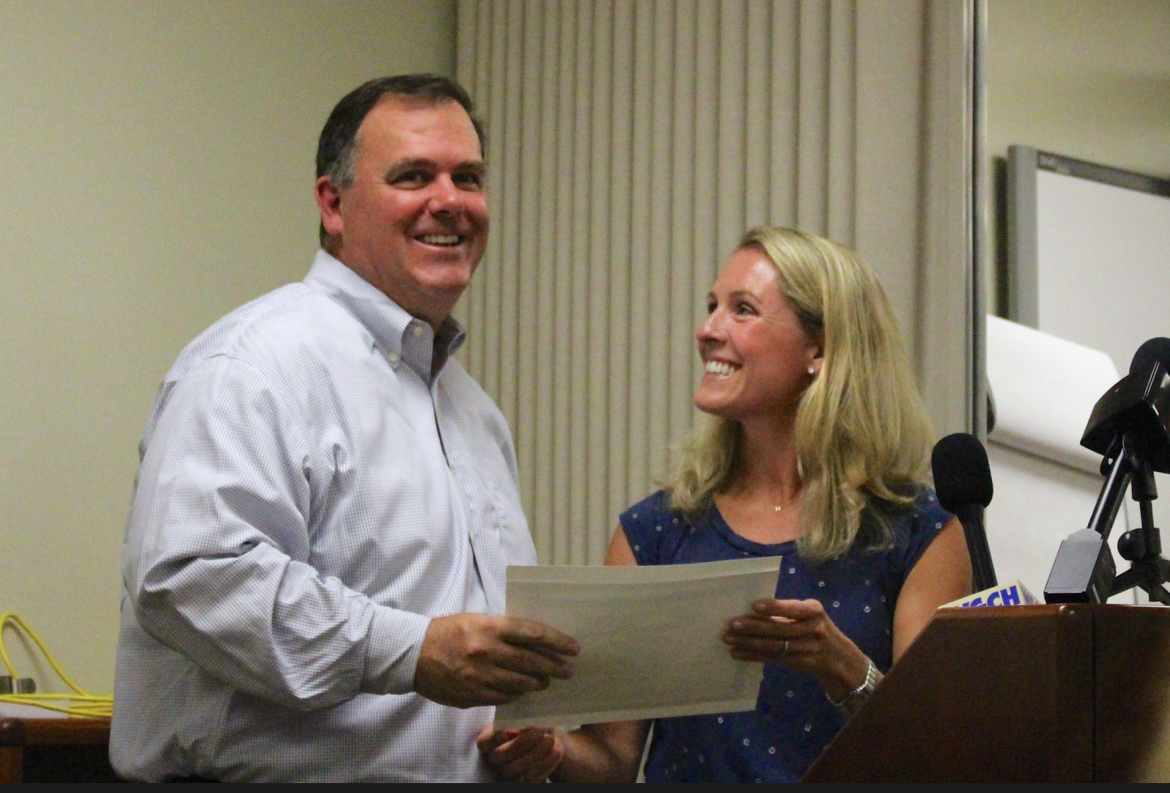 Steve Clark, half of the “dynamic dad duo” along with Rich Fulton at Old Greenwich School, was recognized at the PTA Council Essence awards on Thursday at the Havemeyer building. Credit: Leslie Yager

The qualifications that the Essence committee looked for include selflessness, ongoing involvement, willingness to work as part of a team, ability to motivate others, improving the school community significantly, and working in a way that reflects the PTA values of collaboration, commitment, respect and integrity.

The PTA Essence co-recipients started with Jessica Capozza from Hamilton Avenue School. Capozza’s whose motto is, “Don’t worry, we can get it done,” worked for five years running fundraisers at her school. She spearheaded the school’s Springapalooza, a profitable school fair and working on the teacher auction raffle.

Gaetane Francis, a volunteer at Western Middle School, and PTAC ALP chair was recognized for  contributing a lasting effect on curriculum of schools overall. 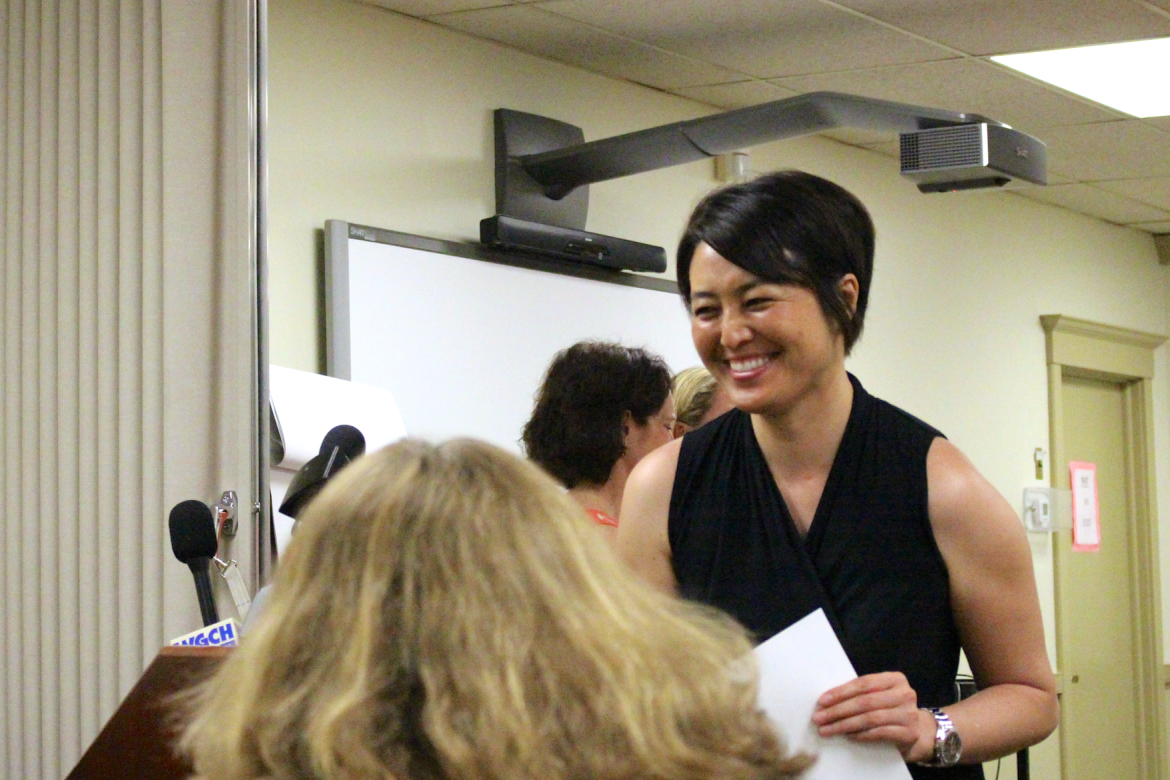 Kyomi Freeman from North Street School was recognized for going out of her way to make all new parents at her school feel welcome, even crossing the room when she noticed someone alone. She built Cherry Blossom Bridges to help newly arrived Japanese families with the culture gap. 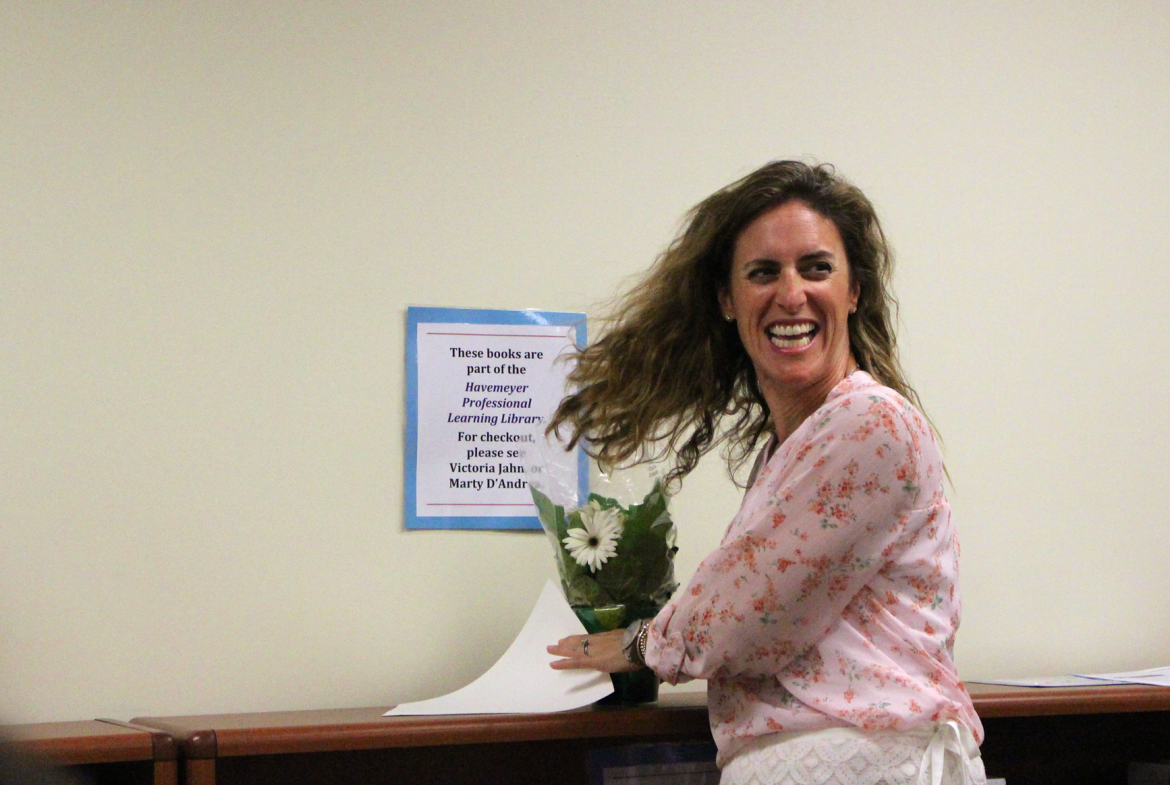 Anne Vranos was recognized as an outstanding volunteer for her work at North Mianus School and Easterm Middle School at the PTA Council Essence awards on Thursday. Credit: Leslie Yager

After the GHS PTA realized that the successful use of social media would require a dedicated volunteer, Andrew Sinclair was the right candidate for the job. Mr. Sinclair who has averaged 2.5 posts a day, even during weekends and school vacations, had made particularly good use of Twitter.

Anne Vranos, a PTA volunteer at North Mianus School and Eastern Middle School, was key in launching the popular NMS Monster Mash, a Halloween event where costumed children dance the night away. 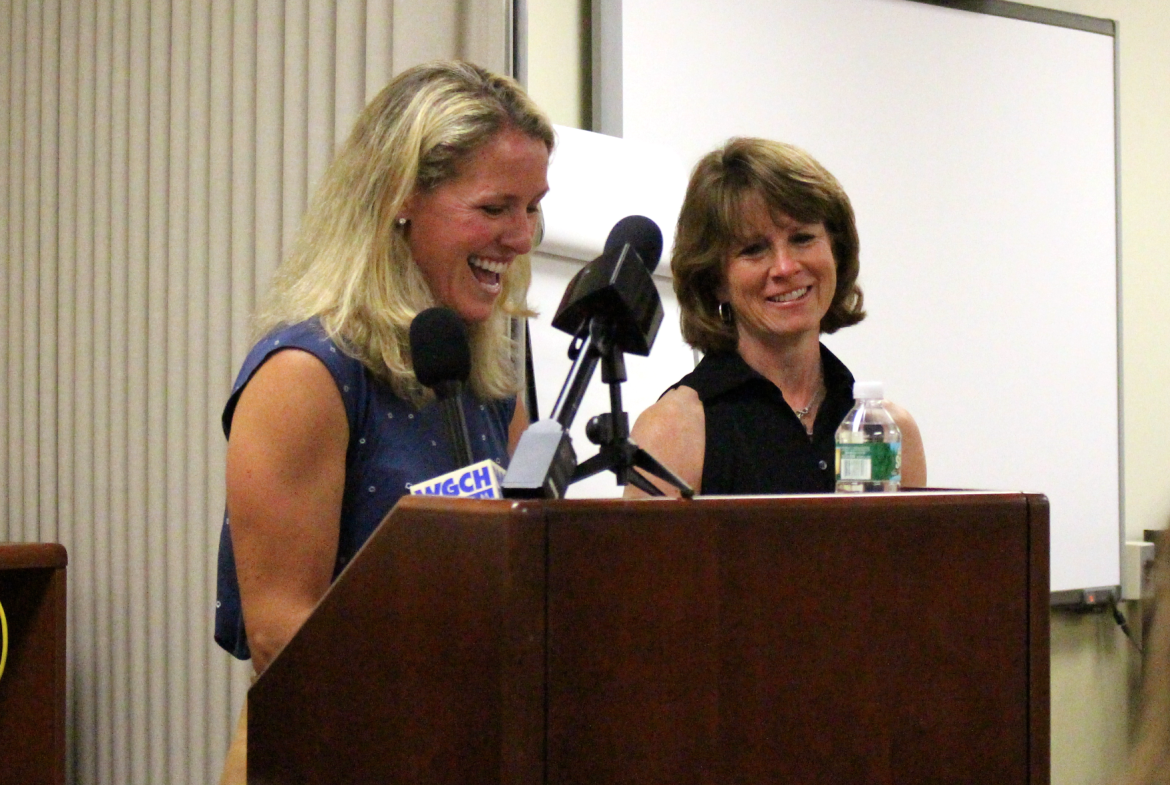 Ultimately the Essence Award  for 2015 went to Julie Faryniarz who was described as a lifer in the PTA world and “volunteer extraordinaire.” Faryniarz has been co-president of Riverside School PTA, president of PTA Council and served on the GHS PTA executive board.

Through the Greenwich Alliance for Education, Faryniarz was key in launching the successful AVID program at GHS.  AVID, which stands for Advancement Via Individual Determination, is a national program that began in California 35 years ago and has since expanded across the country and around the world. This year all 24 seniors who applied to college, are going to college and received over $2 million in merit-based scholarships.

And while many in Greenwich are familiar with Julie’s dedication to the Alliance for Education where she is Executive Director, and the AVID program in particular, for 17 years Julie has put her heart and soul into our community. 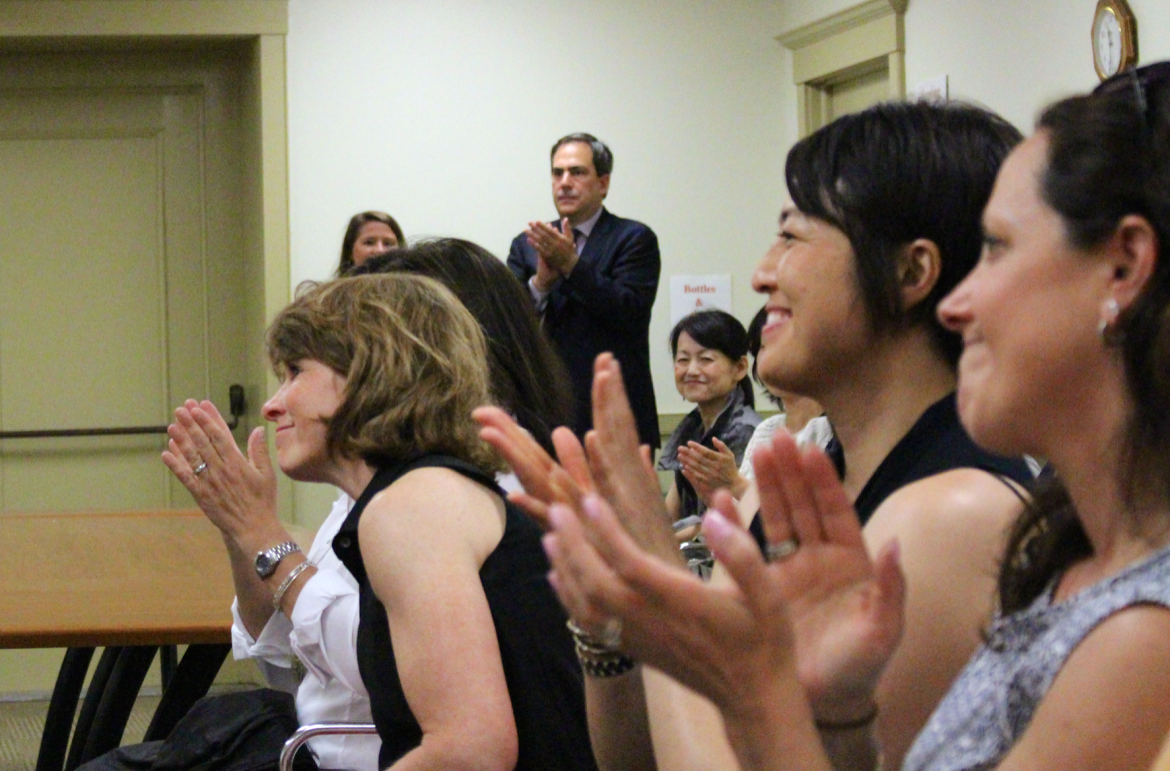 Just some of the other jobs she has undertaken over the years include Afters Coordinator, field trip chaperone, parent advisor for student council and student newspaper, parent volunteer for soccer booster club at GHS, Hospitality Chair for the 75th Anniversary of Riverside School, graduation party volunteer and student activities coordinator at GHS.

It was noted that Faryniarz dealt with bumps in the road over her 17 years volunteering, including mold being discovered at Hamilton Avenue School while she was president of PTA Council, the RISE Task formed, and yet another of several Greenwich Schools Superintendents resigned. Still she remains the volunteer who sees the glass always at least half full. 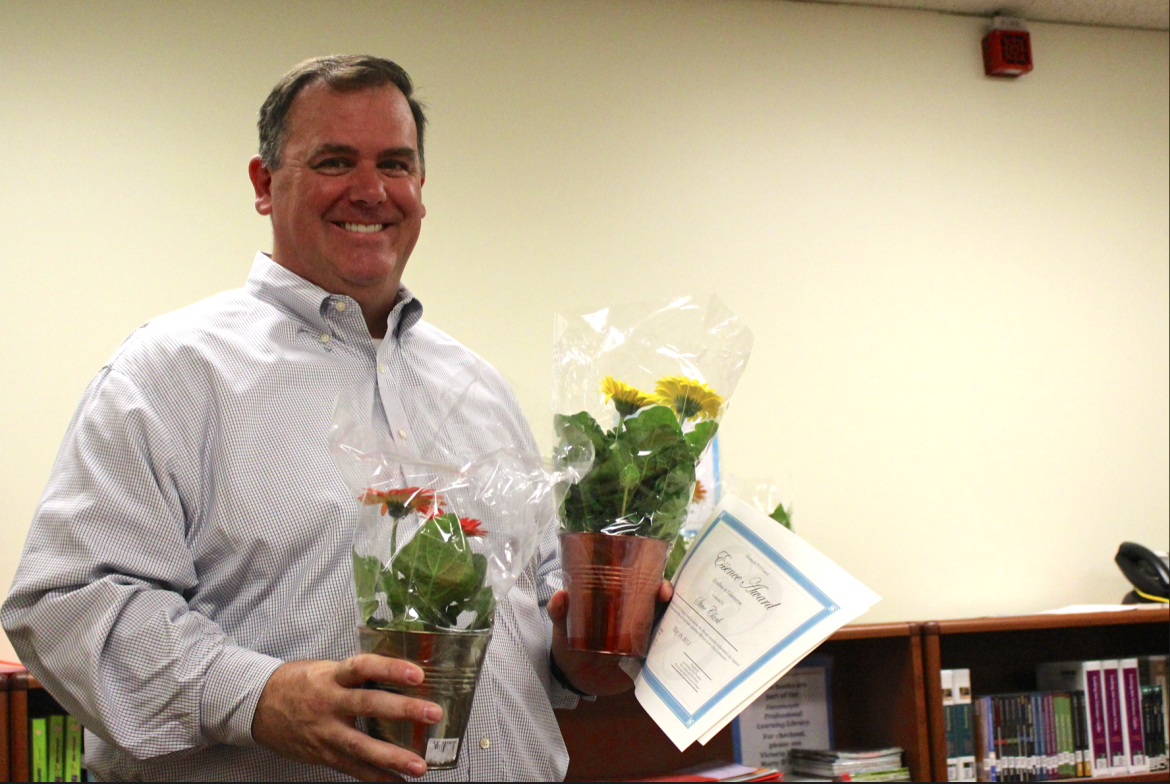 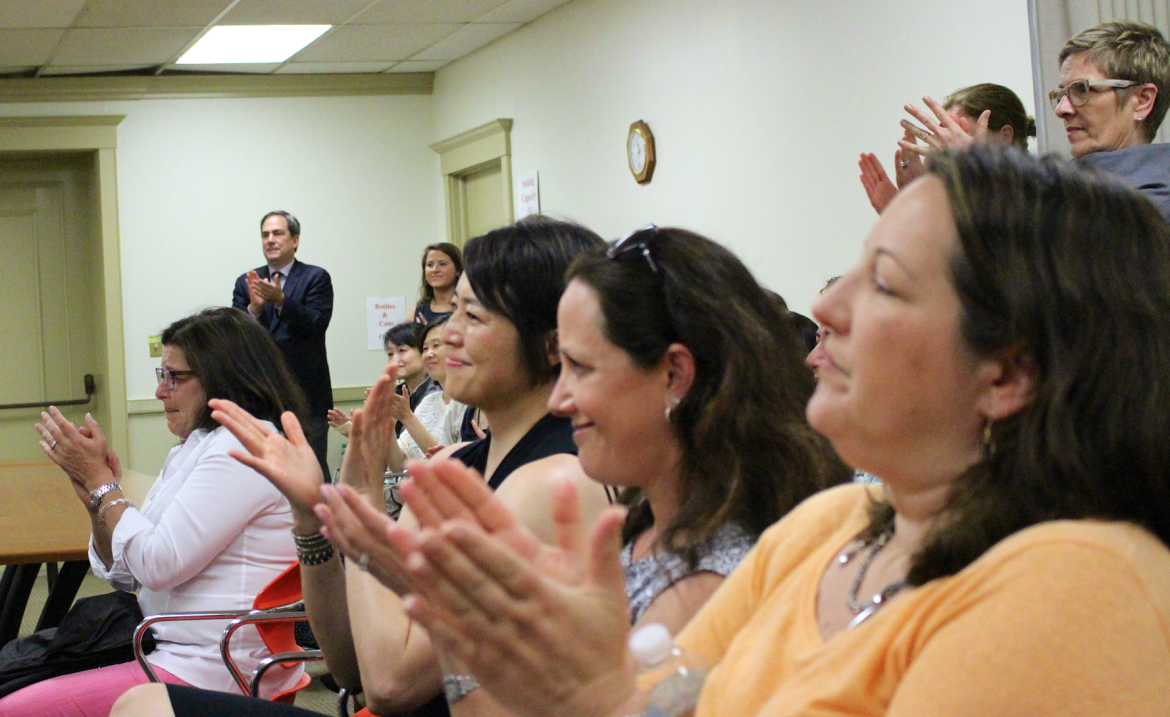