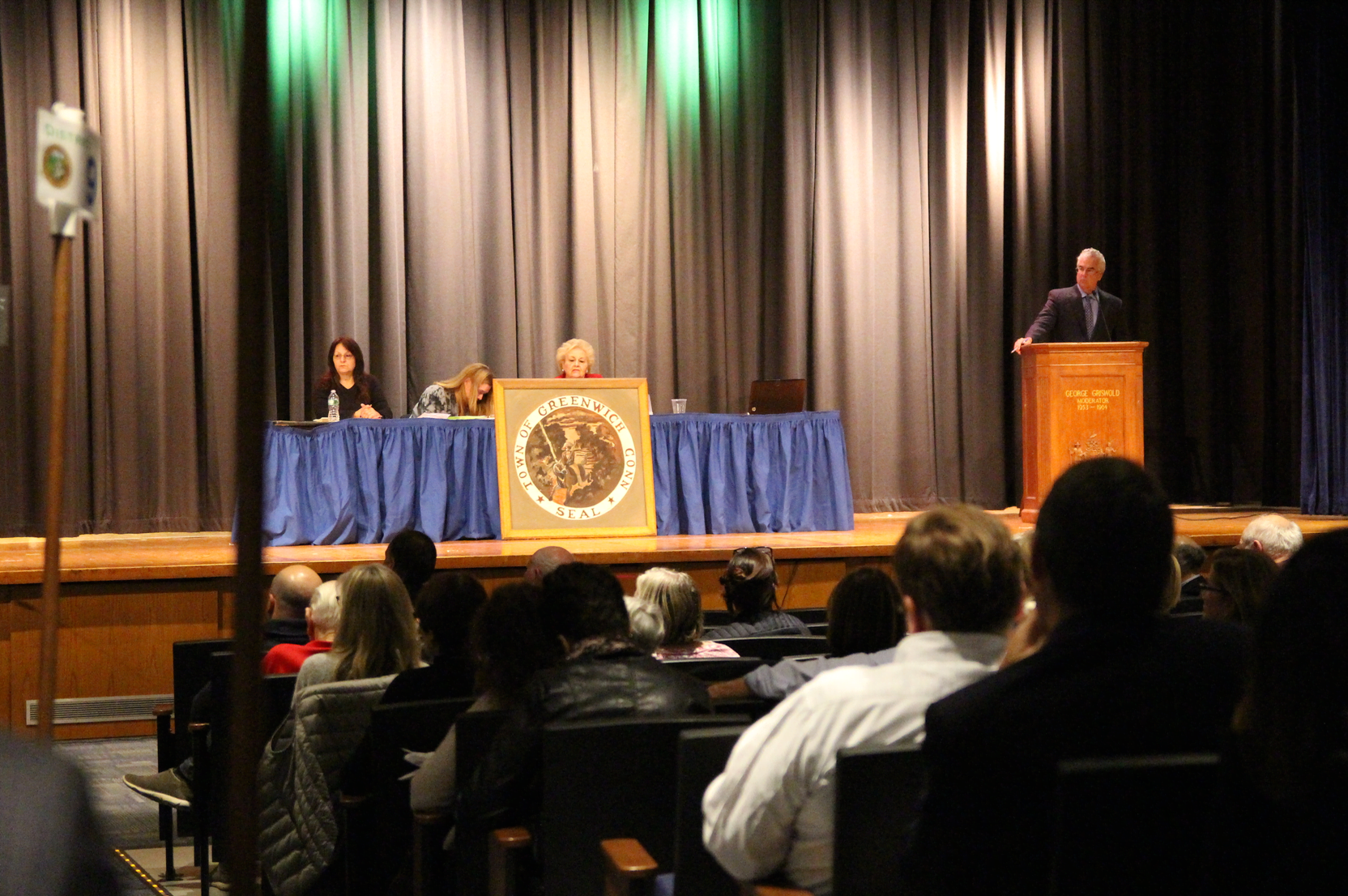 For almost a decade, Donald Heller presided over the Planning & Zoning commission as its chair without holding an election, a requirement of the Town charter.

After he left, the commission held an election. Members voted unanimously for long time member Richard Maitland, a retired Greenwich architect. He has since been re elected twice.

Now, up for reappointment for another 3 year term, Mr. Maitland went before the RTM Land Use committee last week and was bashed by members who blamed him for the commission’s perceived softness on developers.

Comments were made that residents have been marginalized and forced to pay for expensive attorneys in David versus Goliath battles against developers. Maitland  squeaked by with a vote 6 yes, 5 no and 1 absent.

Mr. Maitland explained that the commission had declined several large development applications including the Post Road Iron Works and the apartment complex at 143 Sound Beach Ave in Old Greenwich.

When a finger was pointed to a bulky new single family home at 138 Milbank Ave (recently sold for $4.1 million) Maitland explained that single family houses don’t even come under the commission’s purview.

(That particular single family house came before the ZBA, not P&Z. The applicant sought and received variances on the grounds the new house would be less non-conforming than the original 1904 house with grandfathered in dentist’s office. A half dozen neighbors spoke out against the demolition of the existing home on .15 of an acre and new three story French Normandy style house with a swimming pool and underground garage parking. The ZBA voted unanimously in favor of the new house.) 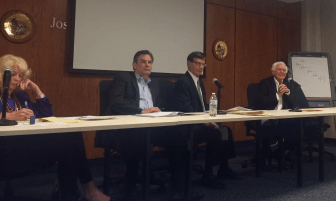 People complained at the Land Use committee meeting about development on Milbank Ave, but Maitland noted the  commission did reject a proposal for a 19 unit apartment complex at Havemeyer and Milbank that would replace five historic homes.

They also passed a regulation that limits new development in R6 including Milbank to single or two family homes – no more condo complexes.

It went largely unsaid, but there are state and federal laws that supersede town zoning regulations including the Religious Land Use and Institutionalized Persons Act RLUIPA and the state 830g affordable housing statute. Both have come into play in Greenwich in recent years. 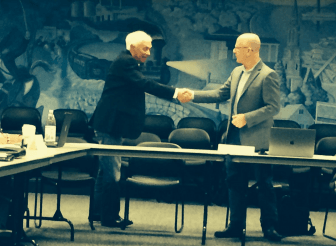 It seemed the tide was turning back in favor of Mr. Maitland during the Appointments Committee meeting, where just one member, Carl Carlson, took Maitland to task, raising his voice to decry the development along the Milbank Avenue and the P&Z decision on Neighbor to Neighbor for a food pantry building by Tomes Higgins House.

(The State Superior Court has affirmed P&Z’s approval of the Neighbor to Neighbor project and Putnam Park has appealed to the Appellate Court.)

Alice Duff offered a counterpoint when she said, “You can’t lay the blame at Mr. Maitland’s feet. If you really care, you have to go to the P&Z meetings and make your voice heard. P&Z listens and then deliberates within the law.”

But the RTM on Monday night had the final say, and any reprieve for Mr. Maitland vanished.

After each speaker at the podium complained about for example, Greenwich Academy encroaching on the residential neighborhood along Maple Ave, or the Stanwich Church encroaching on the historic Stanwich neighborhood with their Center for Hope and Renewal, or the Chabad Synagogue proposal to replace the majority of the historic Mason street Armory (will before P&Z on Oct 30), there were loud rounds of applause.

Selectman Sandy Litvack defended Maitland, though he received no applause. He said he and fellow selectmen Tesei and Toner took their decision in favor of Mr. Maitland very seriously.

“Lest you think there are people lined up to do this job, let me assure you there are not,” he said. “I think 18 years on a commission gives me pause for concern, but then I asked myself what kind of person do I want on the commission? You want someone dedicated, who spends the time and gives it thought.”

“He has no bias toward developers. He has a bias for what’s good for the Town,” Litvack said of Mr. Maitland. “In every case he’s exercising his best judgement. If you have gripes, that’s fair, but it’s not fair to tag it all on him. Peter, John and I all thought he should be renominated.”

But Litvack was the minority at the podium.

Charlotte Walker, president of the board at Putnam Park who had moved away from Old Greenwich and returned to Town after 20 years, said she was shocked by the rapid development in her absence.

“We have to rely on a strong P&Z commission that is proactive not reactive and to enact regulations that support our Plan of Conservation and Development, and I am here to tell you that I don’t think that is happening,” she said, adding that development of multi family homes on Milbank Ave took place despite considerable push back from neighbors.

She said that although P&Z did approve a new regulation in the R6 zone that limits buildings to single or 2-family, (That change came about under Richard Maitland’s chairmanship), the regulation change came “many years too late.”

“Some of you may think, ‘Not in my neighborhood,’ and have not been effected by these projects,” Walker warned. “With this commission your experience will be, ‘It’s coming to your district very soon.”

Ms. Walker was applauded after she said, “I can’t see how our current P&Z has done our town any favors. I’ve found P&Z conciliatory to developers and not to neighbors. …It’s time for a change.”

Jaysen Lee Medhurst of District 1, which includes Milbank Avenue, said many of his constituents had gone to P&Z meetings and said they had not felt listened to.

“It’s us on one side, and developers and their lawyers on the other. Who is listening to us?” he asked. “Not the Planning and Zoning commission. The citizens feel outmatched  by deep pockets. End up feeling cheated and it begins to tear at the fabric of the community and its shared values.”

Doreen Pearson who along with her husband Tog has lived in and owned the Stanton House Inn on Maple Ave for 32 years, said the bed and breakfast is a legally, historically non conforming property that was so designated some time before 1940.

Mrs. Pearson said Maple Ave is already overburdened with traffic, and noted how traffic backs all the way up Maple Ave from Putnam Ave. She said on one side of her inn is Second Congregational Church with its busy preschool, Act II Consignment Shop, and  “multiple businesses.”

She said on her other side, at 96 Maple Ave she is faced with a proposed Greenwich Academy preschool and daycare for 60 children and 16 staff, plus apartments on a historic property that already received a Historic Overlay back in 1979.

“It was a residential home that was on the market for some time at a much higher price,” she said of 96 Maple Ave. “The Academy waited and then, after making a bid for our property and being refused, turned to the next property and bought it at a bargain basement price.”

Pearson said, “Of course they can get it at a bargain basement price, because they don’t pay taxes. Those taxes get shifted to all of us. I totally oppose the reappointment of Mr. Maitland because he supports these tax exempt 501(c)3’s beyond the tax payers and resident of the town.”

“We’ve been told that Greenwich Academy can’t be beaten. They have extremely deep pockets – way deeper than the tax payers of Greenwich. They’re accumulating property off the tax roll at an unbelievable pace.”

Pearson received a big round of applause from the RTM.

And though Greenwich Academy’s application has yet to come before the P&Z commission Pearson and her neighbors have been frustrated with Greenwich Academy for some time. This summer they turned out in force to oppose the P&Z’s proposed 30% increase in Floor Area Ratio (FAR) for educational institutions.  The text amendment was eventually withdrawn.

At the end of the night, the vote on Maitland’s reappointment was 72 in favor, 98 opposed and 12 Abstentions.

Though the commission has acted to interpret existing regulations, the RTM vote may signal a change is needed in regulations to put the brakes on development.

The vote on Mr. Maitland, who did not attend Monday’s RTM meeting, failed to carry.

The P&Z commission will need to vote on a new chair before their next meeting on Oct 30.

Unlike Mr. Maitland who is a retired architect, more than one member of the P&Z commission is a practicing real estate developer.