Applicants seeking to merge 6 lots into one – demolishing 5 houses on Milbank and one on Havemeyer – and constructing a 19-unit building complete with underground parking for 19 vehicles, plus on-grade parking for 18 vehicles totaling 84,767 square feet went before the Planning and Zoning Commission on Sept 7.

This application was submitted prior to changes to the R-6 zone prohibiting more than two-family residences that went into effect June 1.

Tuesday’s meeting was not the first time the applicant has presented the application to the commission.

What was different was that about 25 neighbors, all but one opposing the application, attended the hearing, with about a dozen speaking, applauding each other’s condemnation of the development.

Eric Brower, AICP (American Institute of Certified Planners ), who represented the applicant, said the applicant had made changes since the July P&Z meeting. He said the driveways and garage doors had been narrowed from 20 ft wide to 18 ft. Also, he said his clients were setting the development further back, in keeping other homes on the east side Milbank that are located at the top of slopes. 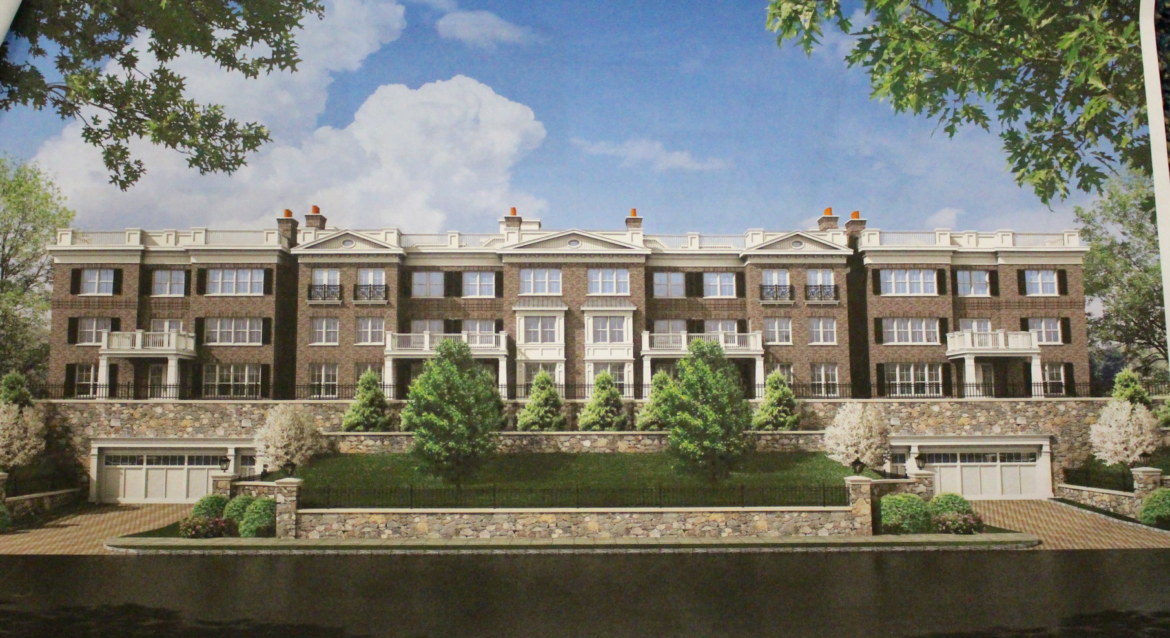 View from Milbank of proposed 19-unit building for the corner of Havemeyer and Milbank Ave.

Three of the six houses to be demolished to make way for the 19 unit residential development on Milbank Ave.

Third, he said, the applicant had lowered the entire building by 1-1/2 ft and raised the garage floor by 1-1/2 ft, for a total of three ft.

Brower said  the grading had also been revised so that instead of multiple 5 ft walls  there would be a free standing wall  sloping up at the street and a 3 ft wall going up to a terrace.

Lastly, he said that the end result would fewer curb cuts on Milbank and Havemeyer.

There were questions about access of garbage trucks and delivery trucks. The reply was that maintenance staff would wheel the garbage out from the garage, and that Fed Ex and other delivery trucks could make a three point turn at the back of the building.

Commissioner Nick Macri, who grew frustrated that the drawings provided were not up to date and were hard to follow, disagreed, as he had done in July, with the applicant’s premise that the corner of Milbank and Havemeyer is a transition area from commercial to residential.

“To that point and what was raised in the petition, and what was discussed in the last meeting, we’re in a transition area,” Brower said. “The photos taken by the petitioners highlight the area east of us. We highlight in our photos areas west of us. We’re right in the middle of two neighborhoods. …We’re not trying to replicate single or two family houses.”

Macri shook his head no. “As I stated in the last meeting, I believe you are beyond the transition,” he said. “You’ve crossed the street now. You’re really into the next step of the residences. . …once you’ve crossed Milbank, you’re beyond that transition.”

When Mr. Brower said the proposed development would be 25 ft from the Housing Authority’s Agnes Morley senior housing, which has 150 residential units in four stories. “You can’t say it’s not there. It’s our neighbor,” he said.

Despite Mr. Brower’s arguments that the proposed building shared the set back of other original houses on east side of Milbank and was no taller than them, Mr. Macri balked.

“The existing buildings have space between them,” Macri said. “It (the proposed building) will be perceived as a solid mass from one end to the other. That’ll be a disservice to the street if we approve that.”

The neighbors from homes on Milbank, Ridge Street and Havemeyer took turns blasting the development.

They also presented a petition against the project that was signed by 150 people, and submitted a page of signatures collecting during the meeting. The petition listed three main objections: traffic, drainage and overall character.

Mr. Maitland said there was no accounting for character, but that the applicant should provide expert opinion on the other two petition issues.

John Ferguson, a Greenwich resident of 45 years, said he bought his home at 250 Milbank Ave, directly across from the proposed development, back in 1983.

“It’s been renovated in the Victorian tradition of the street, and is an example of what should be done and has been done in many good cases,” Ferguson said. “This building is a travesty. It looks like Tremont Avenue in the Bronx.”

“This is not only unattractive, it’s environmentally distressing. …This is like the Berlin Wall,” Ferguson continued. “You have an environmental problem, a traffic problem and a water problem. You couldn’t have a worse looking building than this building.”

Longtime neighborhood resident Judy Goss was next. “I’m not happy about most of the development on Milbank, but I hope you agree this is of a scale that is totally inappropriate and I can’t think of any place in town where it would be appropriate.”

Goss said she was concerned about traffic, which she described as already “too much,” arguing that the occupants of the proposed development would be more affluent, and therefore require more services, and traffic, from babysitters to deliveries.

As for the corner of Milbank and Havemeyer, Goss said, “I have observed people run that red light more than any other light in town, and there is also a bus stop for Central Middle School on that corner.”

Debbie Cowley of 252 Milbank Ave said she wondered if the entire neighborhood was aware of the hearing and the scale of the proposed development. She said her single family home is right across the street and she chose the neighborhood ten years ago for its family feel with houses and townhouses. “This will take away from the character of the street,” she said.

Steve Galkin, a 28 year resident of 19  Ridge Street said he was concerned about traffic.

“Traffic will go down Ridge Street to the entrance to this structure. In the past years we’ve had three dogs killed because cars use Ridge Street as a bypass,” Galkin said. “It’s a go-through street especially in the morning for commuters to the train station.”

Hans Middelberg of 83 Havemeyer said he was in favor of the project.

“I’m an oddball because I’m for the project,” he said, adding, “After evaluation research and review, I came to the conclusion to support it because we live in a changing world.”

Middleberg said the proposal reflected a reasonable change and would result in a benefit to the community in terms of supplying vertical living, which he said was in demand, and would add to the tax base.

Middleberg said the proposal was both “functional and pleasing to the neighborhood, and adds positively to the character of the community.”

“The new building and greenery should be applauded because it ends a decade of neglected and crumbling houses in the center of our town,” he said.

Mr. Galkin returned for one last question at the end of the hearing. “What kind of weight does the petition get? We have over 150 signatures from a small neighborhood.”

“I’m asking the applicant to respond to the issues in the petition,” Mr. Maitland said.

“Our job is you guys,” commissioner Alban said, nodding to Mr. Galkin.

The application is scheduled for two Architectural Review Committee (ARC) meetings: September 13 and Oct 7, and will return to the Planning & Zoning Commission on October 14, 2017.

GFP will follow the course of the application. Watch for updates.