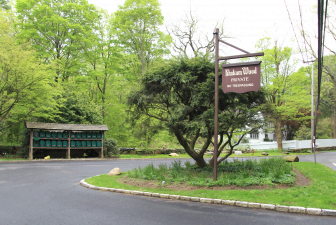 They called it Brae Tarn.

Back in the 1928, a group of ten members of the Real Estate Board of Greenwich worked with Country Life magazine to build a model country estate in the private community that would become Khakum Wood, located off Round Hill Road.

They commissioned the design of the home with architect Julius Gregory, and hired the landscape architecture firm of Frederick Law Olmsted. They even supervised the furnishings.

According to Sabine Schoenberg, who has the active listing for the property through her company PrimeSitesCT, the creators of Brae Tarn were thinking long term.

“The general perception of the Depression is that everyone lost their money,” Schoenberg said. “The Khakum example shows that some smart investors pulled their money out of the market beforehand, and put it into a Khakum real estate. In other words, they perceived an investment in a Khakum Wood property to be a sound one.” 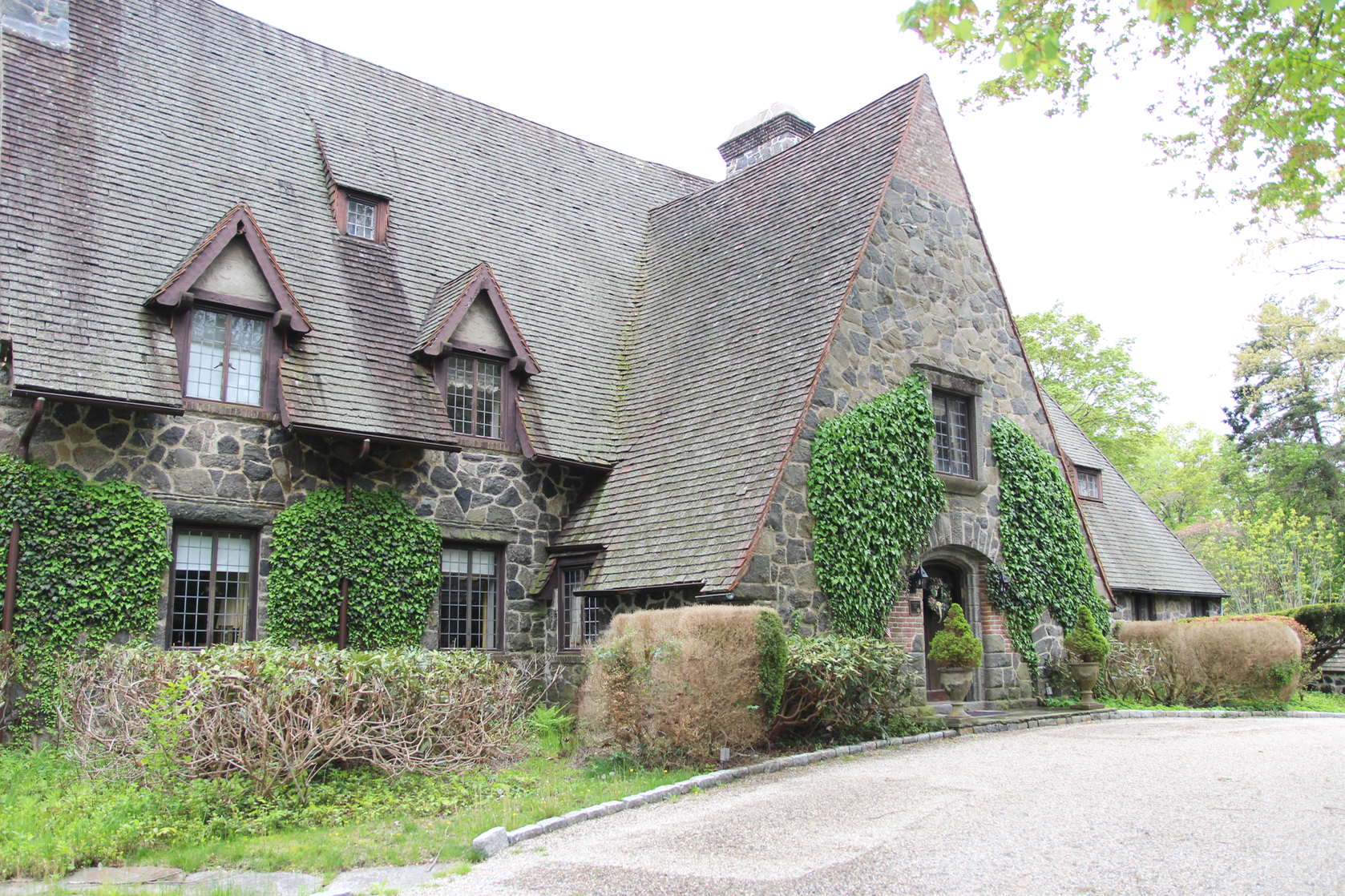 The illustrated feature on Brae Tarn in Country Life, published at the time by Doubleday & Co, made quite a splash when it hit the stands in January 1930.

According to the Greenwich Historical Society both the house at 76 Khakum Wood and the entire private community, are significant to the Town’s history.

Isaac Newton Phelps Stokes purchased about 180 acres of farmland in Round Hill in 1903. He worked with landscape firm of Olmsted Brothers, founded by Frederick Law Olmsted, to lay out the private community. The idea was to subdivide the land for a series of houses with a respect for the natural topography including natural rock outcroppings. The irregularly shaped parcels ranged in size from less than an acres to more than four. The designers recommended the general positioning of the houses and each driveway incorporated a circle.  The first general plan for the neighborhood was created in 1925.

According to the Historical Society, by fall 1926 road building was complete, and water and electricity were provided to each lot.

“The district, designed in the traditional image of the ideal American suburb – defined by winding drives and carefully placed houses screened by informal plantings – owes a direct debt to the Olmsted concept of civilized living.” – Historical Society of Greenwich 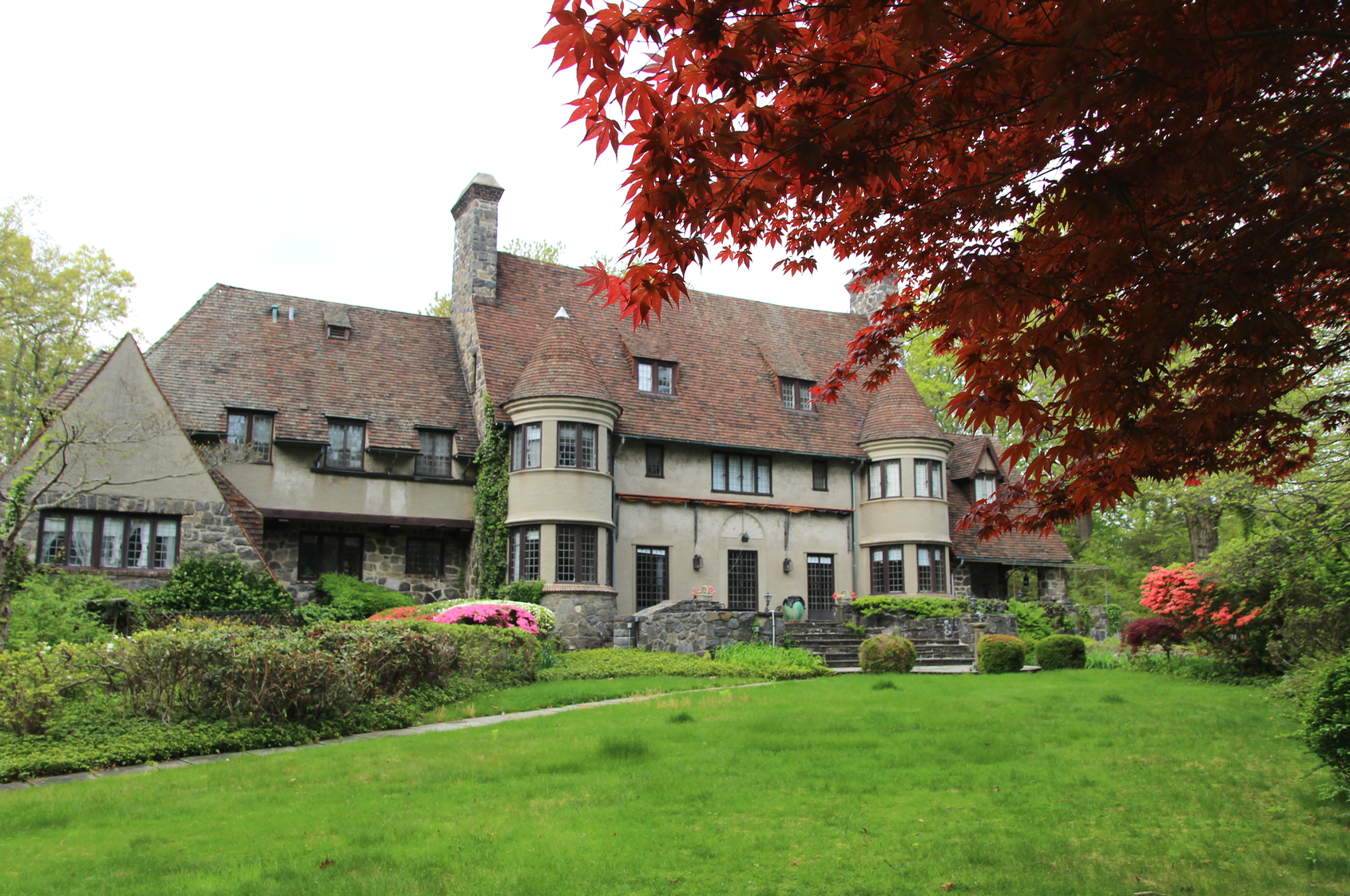 The rear of Brae Tarn at 76 Khakum Wood features a stone terrace that front the twin two-story towers with conical roofs reminiscent of a castle. Photo: Leslie Yager

Brae Tarn at 76 Khakum Wood has a sweeping rear lawn that borders the expansive lake. Gravel pathways meander along the lake past stone terraces positioned for their views. One path features a boat launch, where the current owners keep a row boat. The community of Khakum Wood allows canoes, kayaks and paddleboards in the lake – anything self powered  (no boats with gas-powered engines).

The house at 76 Khakum Wood was designed one-room deep so that all but the staff quarters benefit from views of the grounds and Olmsted-designed private lake.

The house features a library, living room, dining room, kitchen and staff quarters on the first floor. There are four bedrooms and a dressing room and staff rooms on the second floor. On the top level there are two bedrooms and a cedar closet.

The 4.15 acre property features a swimming pool of heavy stone masonry construction. The 23 ft by 75 ft.  pool, accessed by a double slate and wrought iron stairway is entirely above ground. It was constructed with mechanicals and changing rooms housed at the ground level. The pool, which has a depth of 4 ft to 10 ft, features wide flagstone terraces on one side and both ends.

The next owner of Brae Tarn has the opportunity to renovate this magnificent home and property to make it the trendsetter for the next century. 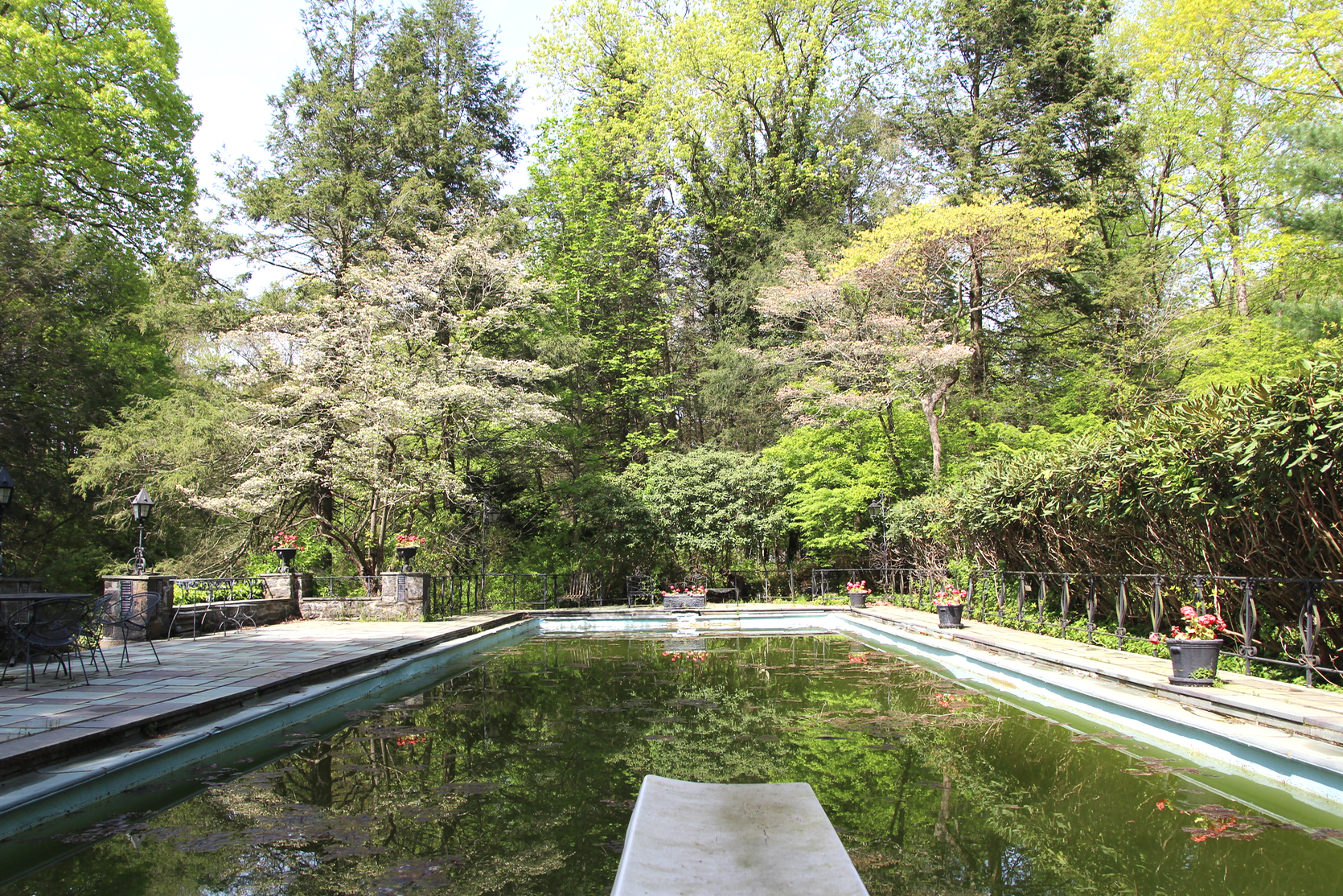 The original swimming pool of heavy stone masonry construction is entirely above ground. A double slate and wrought iron stairway leads to the pool, which is 23 ft by 75 ft. Photo: Leslie Yager 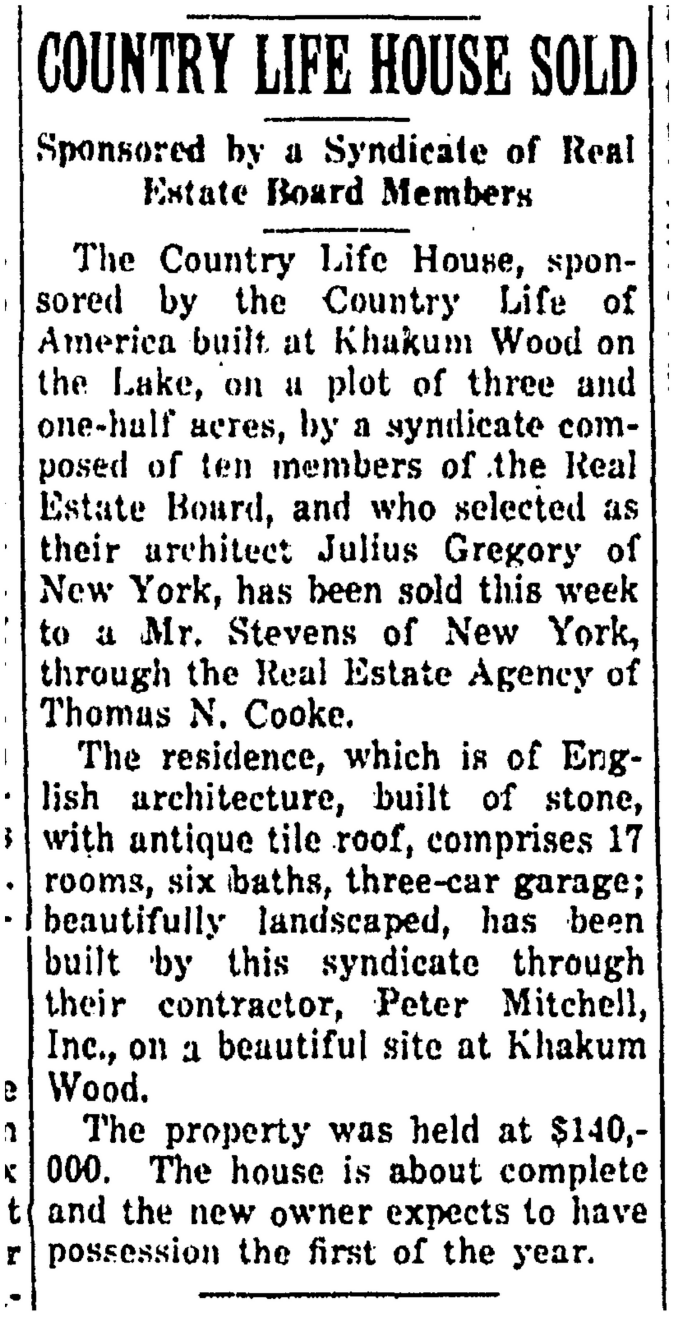 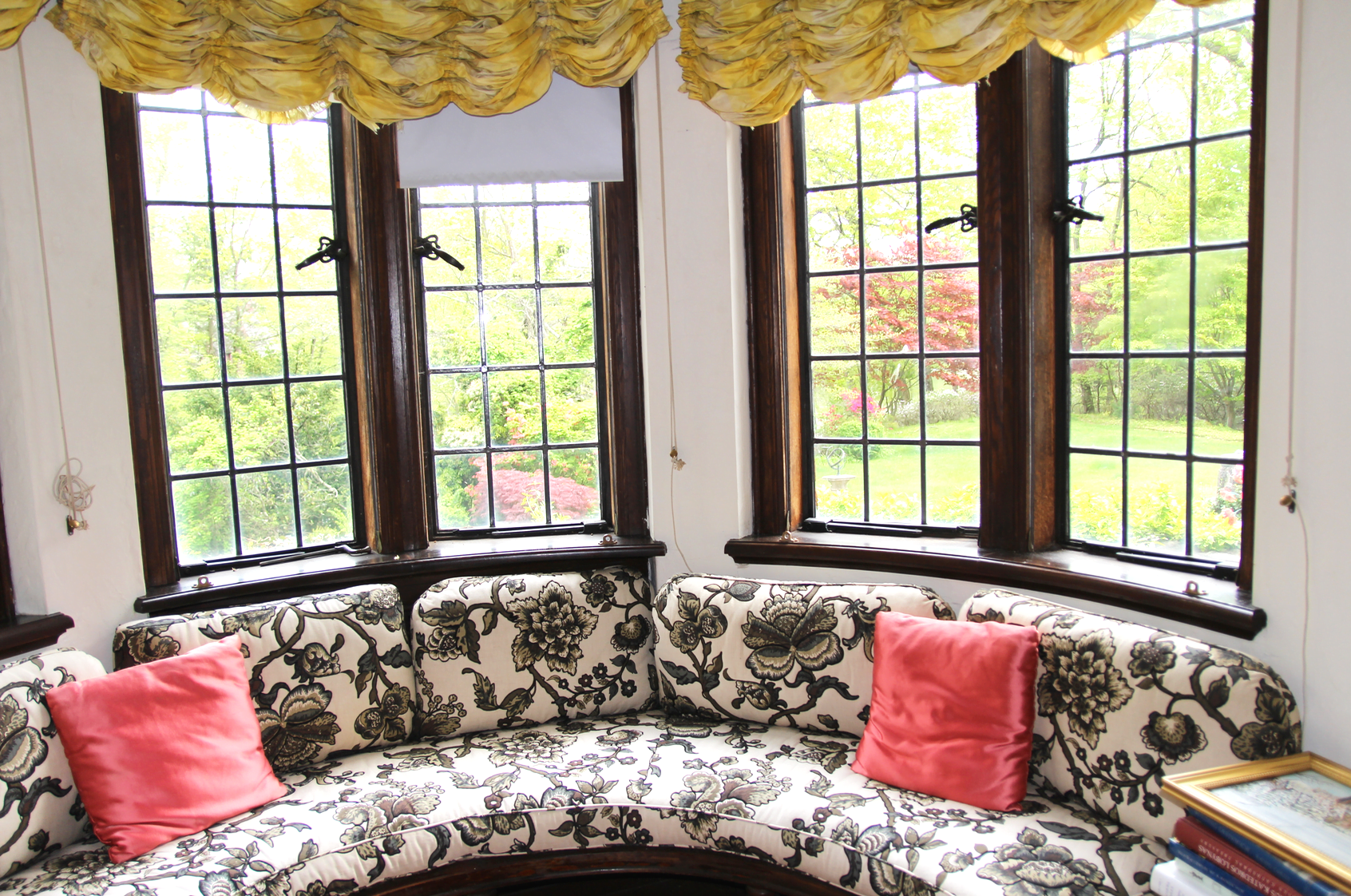 All the rooms at 76 Khakum Wood are one room deep so that all but the maid’s quarters benefit from views of the grounds and lake. Photo: Leslie Yager 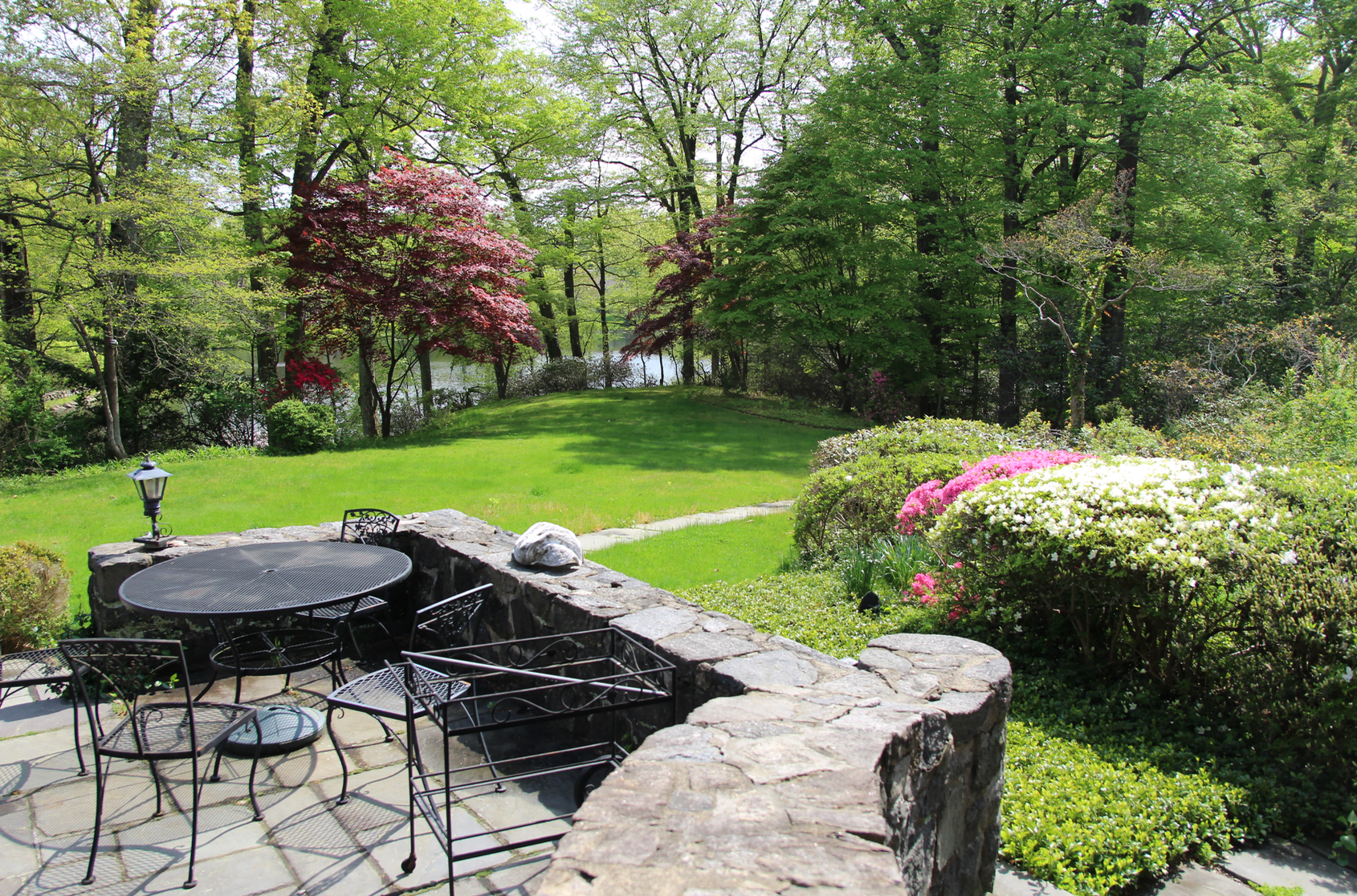 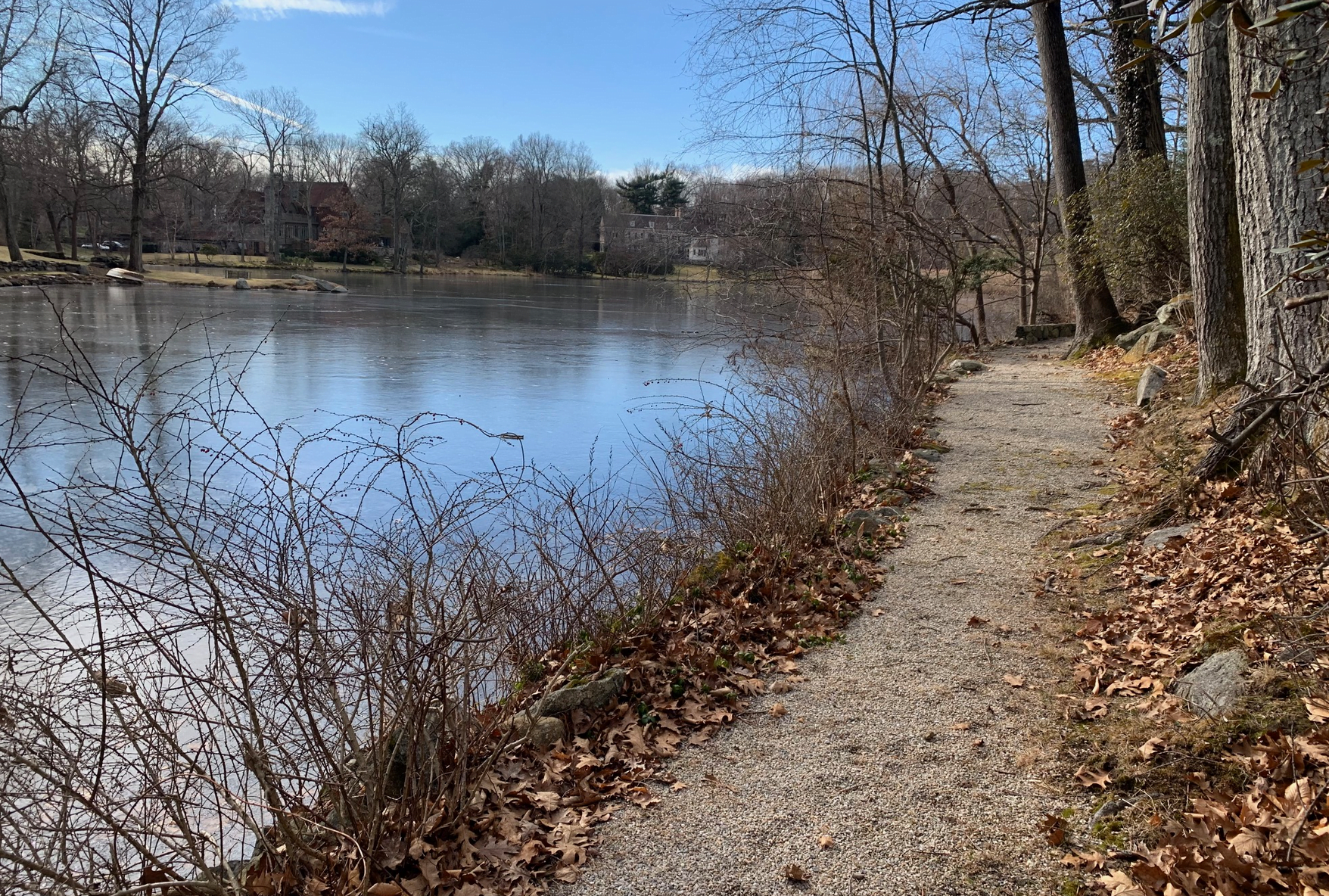 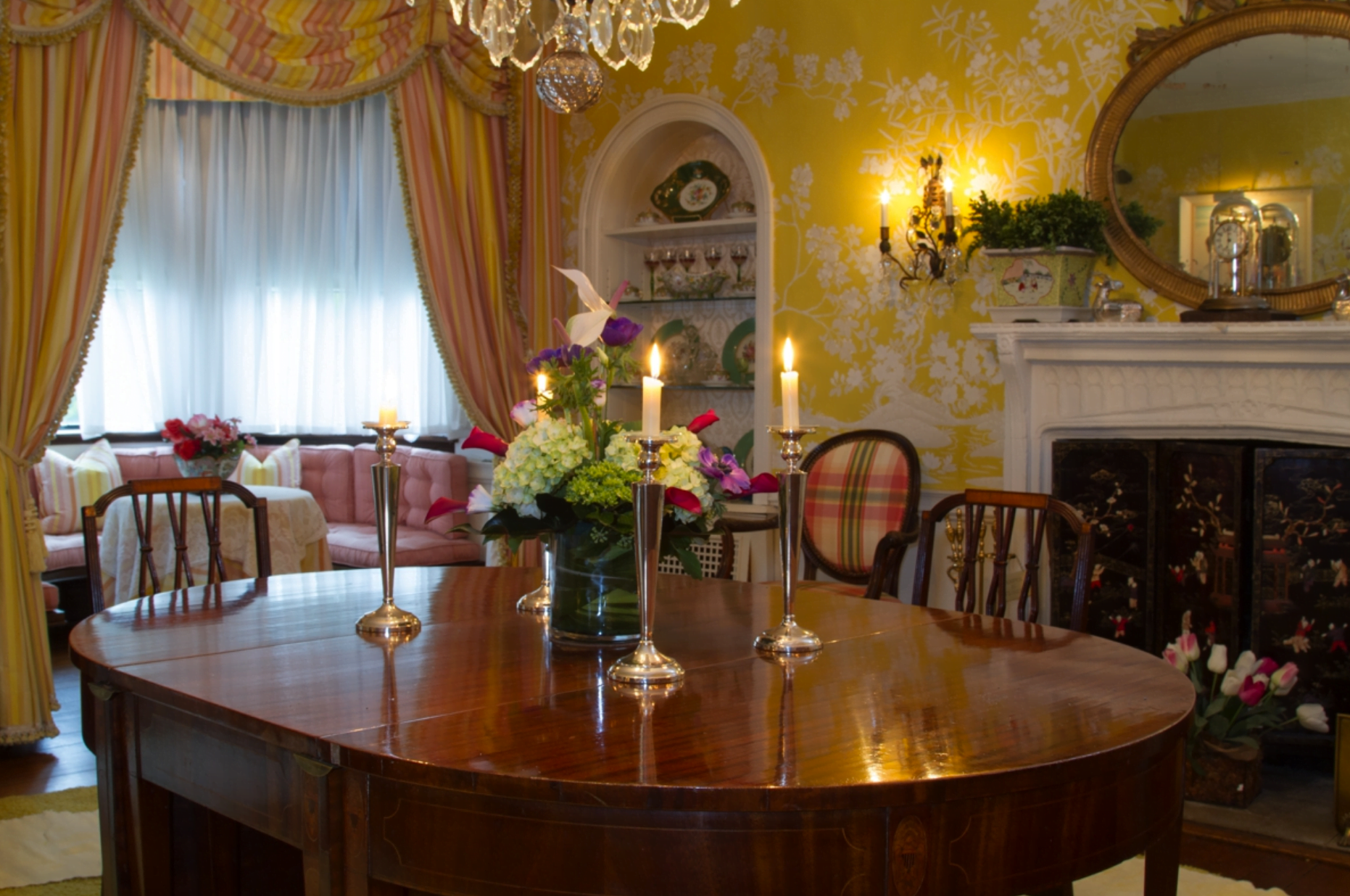 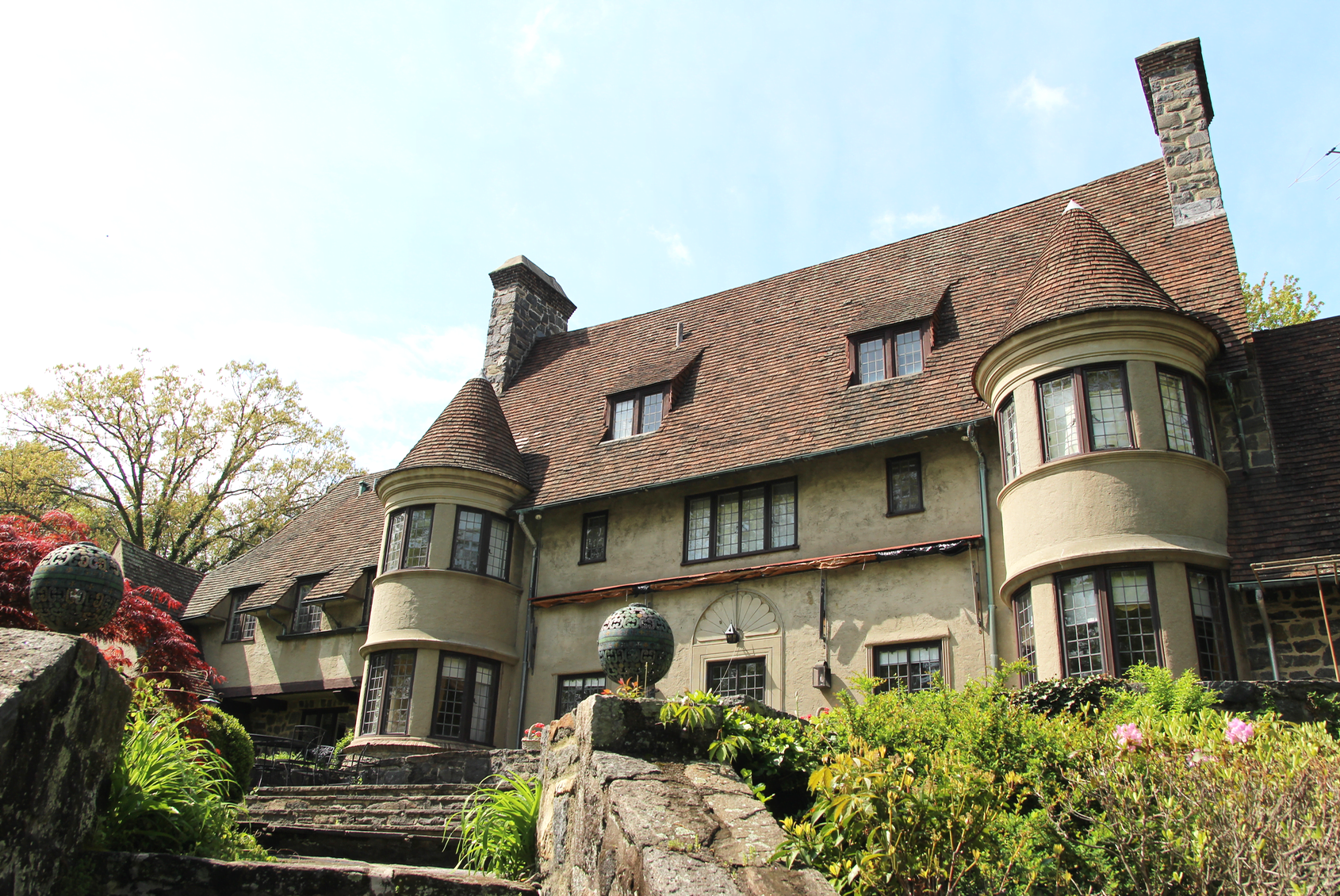 View of the rear of Brae Tarn from the path leading to the swimming pool. Photo: Leslie Yager 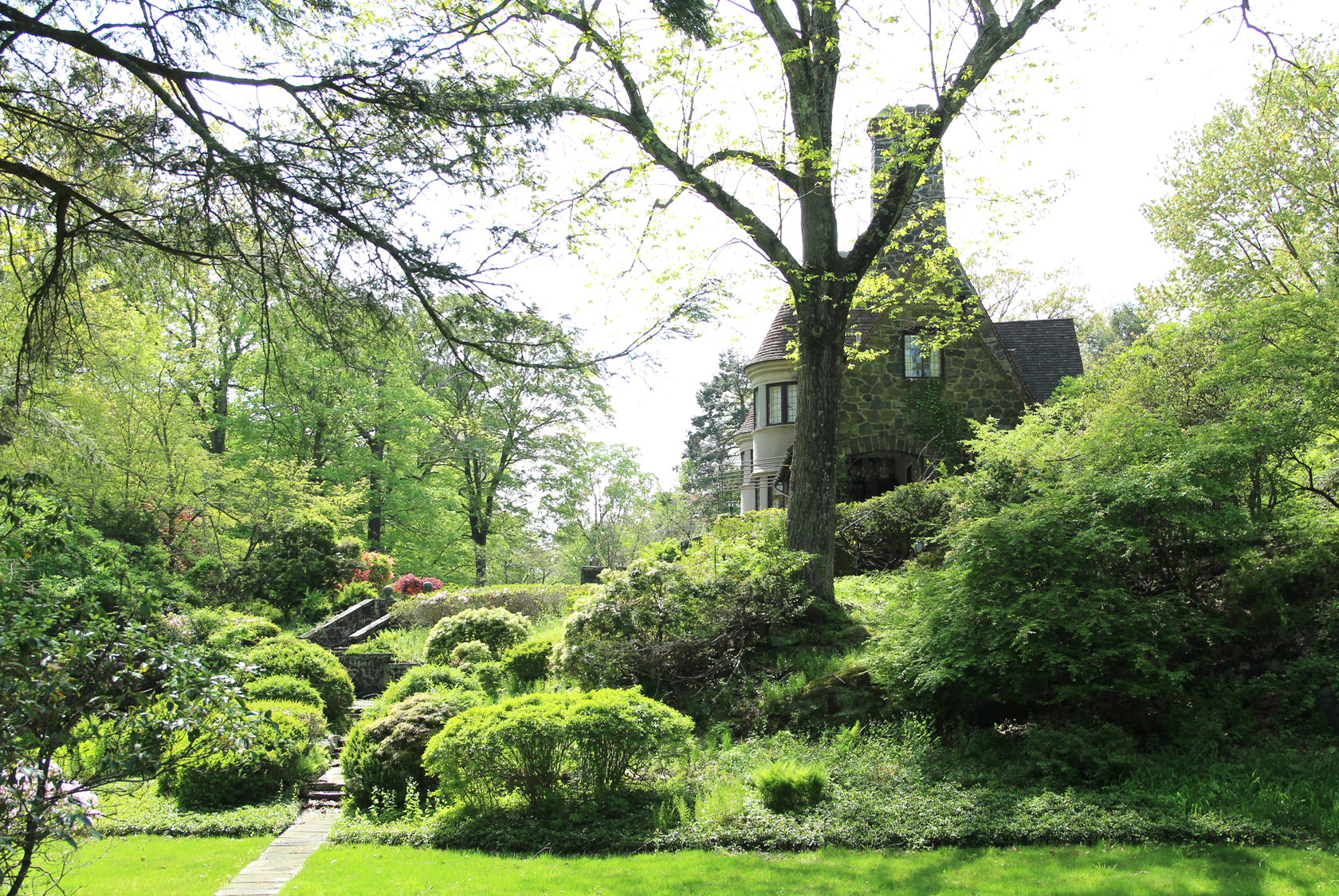 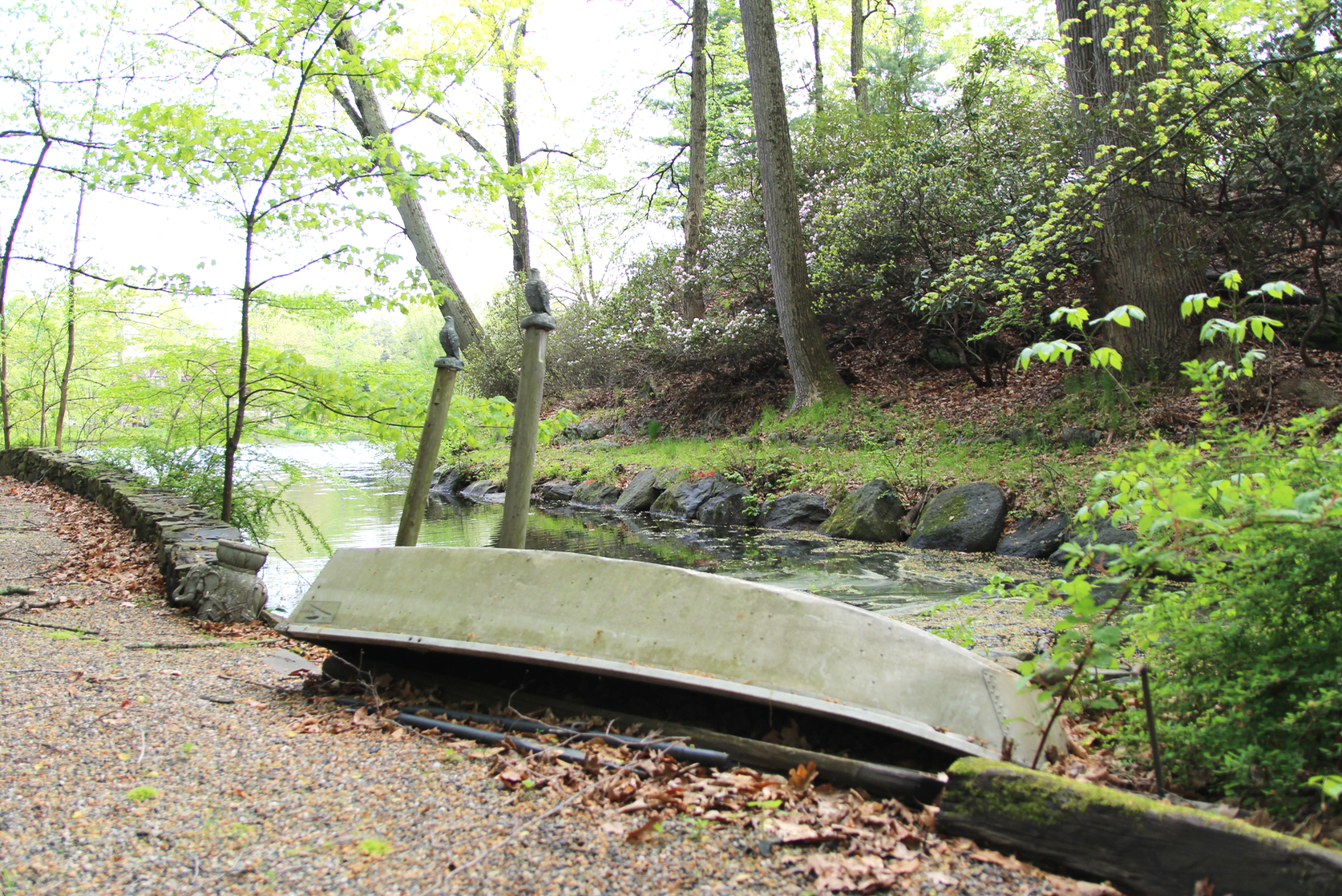 The community of Khakum Wood allows canoes, kayaks and paddleboards in the lake – anything self powered (no boats with gas-powered engines). Photo: Leslie Yager 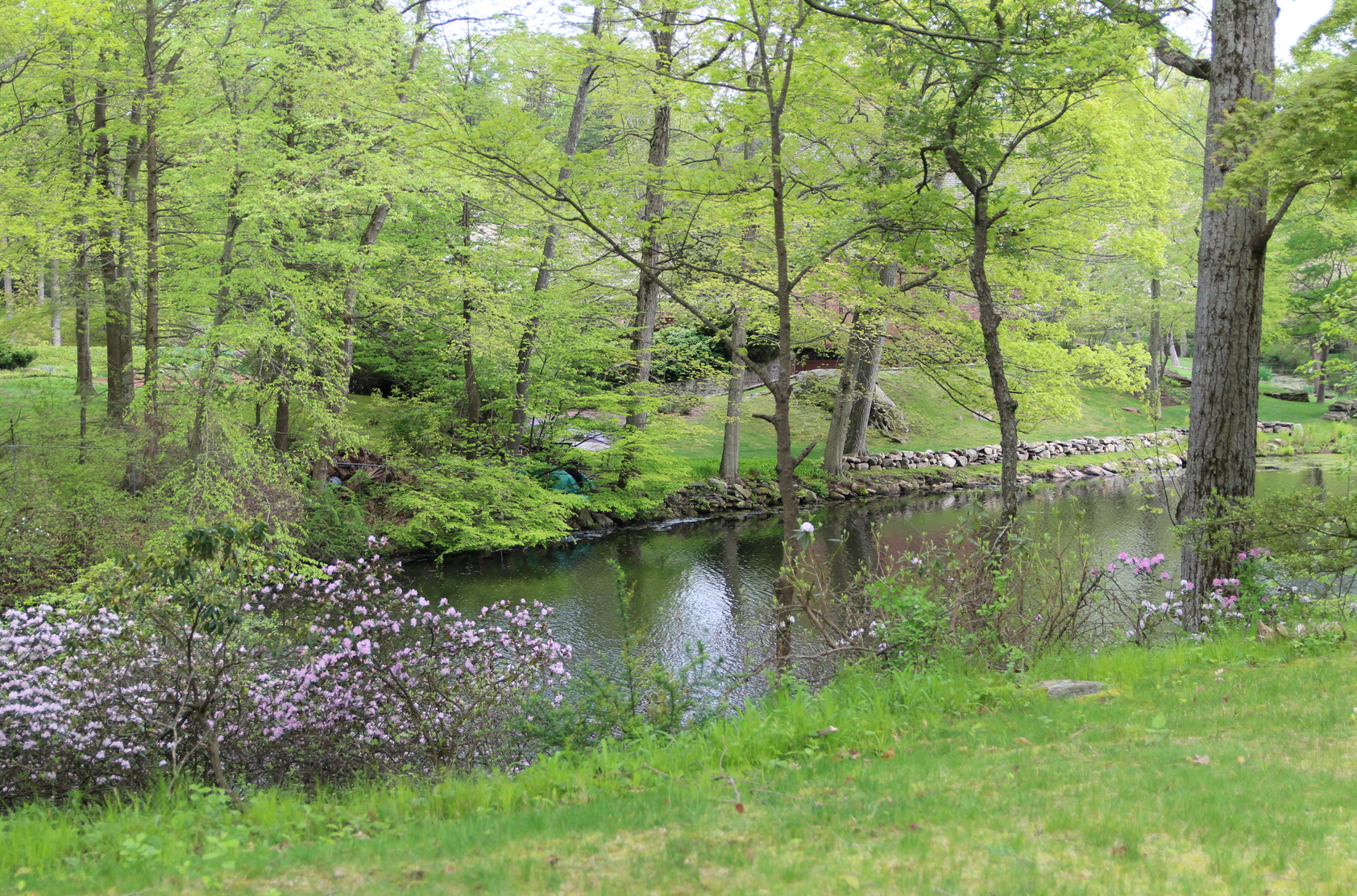 Facing the private lake, the lawn slopes to the water at 76 Khakum Wood. Photo: Leslie Yager 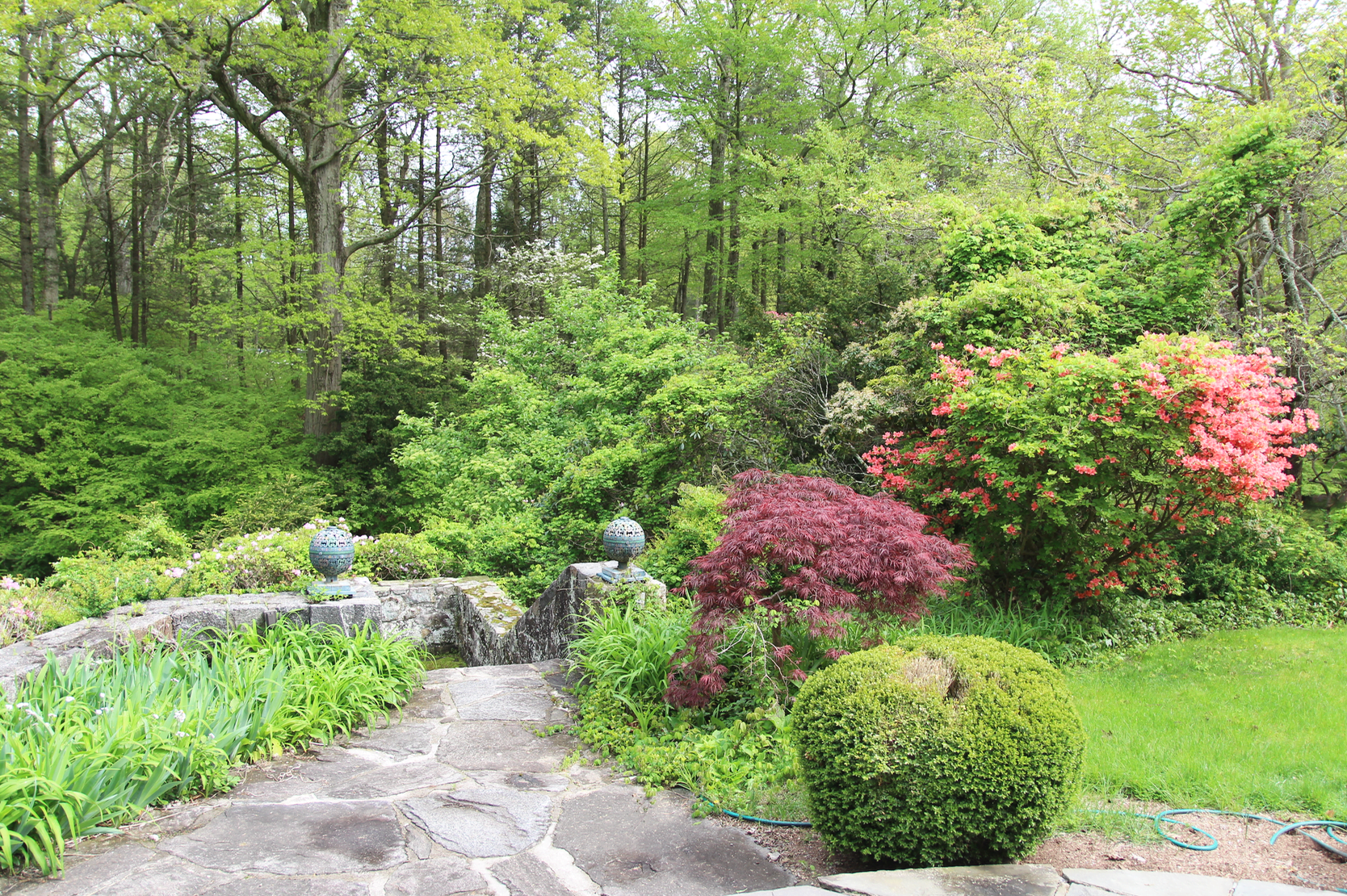 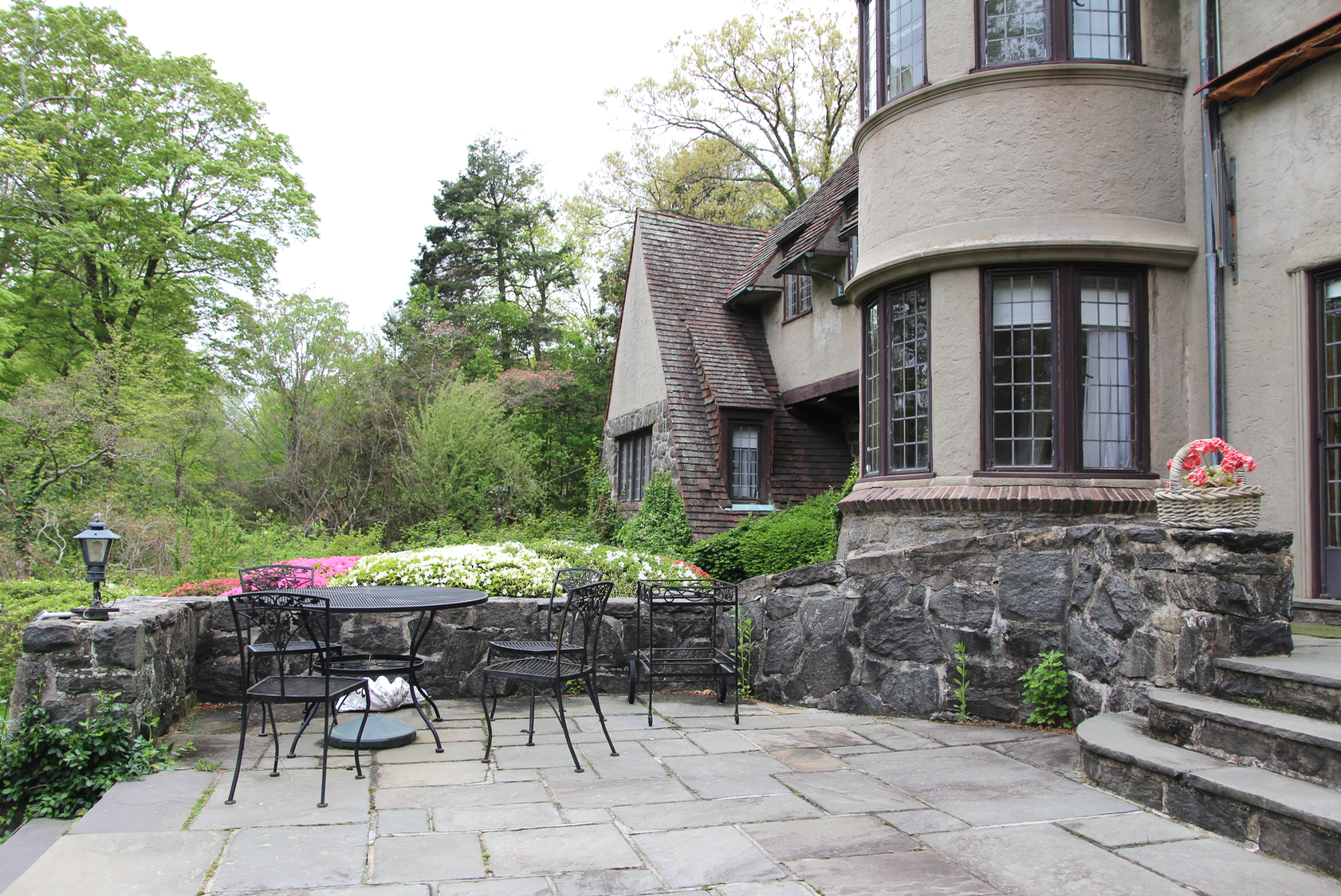