If you’ve ever wondered what it is, pickleball is a racquet sport that is fast growing in popularity.

Originated in the 1960s with a bit of improvisation on the part of Joel Pritchard, a congressman from Washington State, the sport came about after a bit of all-in-the-family improvisation.

One weekend, Pritchard’s family had nothing to do and used what was handy to make up a game on a badminton court. They used ping-pong paddles and a wiffle ball. Lowering the badminton net, they could include both young and old members of the family. The game caught on in the neighborhood and beyond. 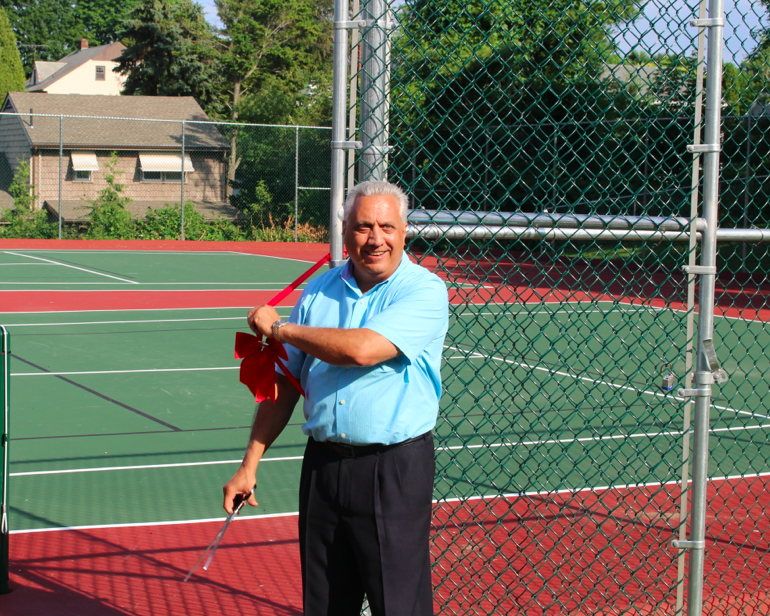 Joe Siciliano cut the ribbon on the resurfaced tennis courts at Christiano Field on Wednesday. The tennis courts are also set up for pickleball, a racquet sport growing quickly in popularity. Credit: Leslie Yager 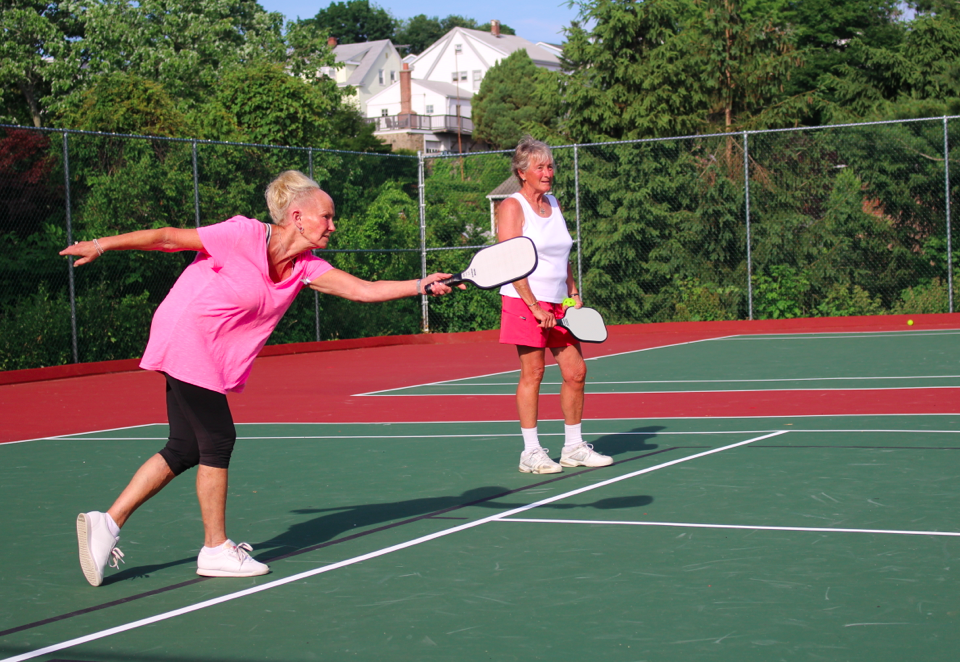 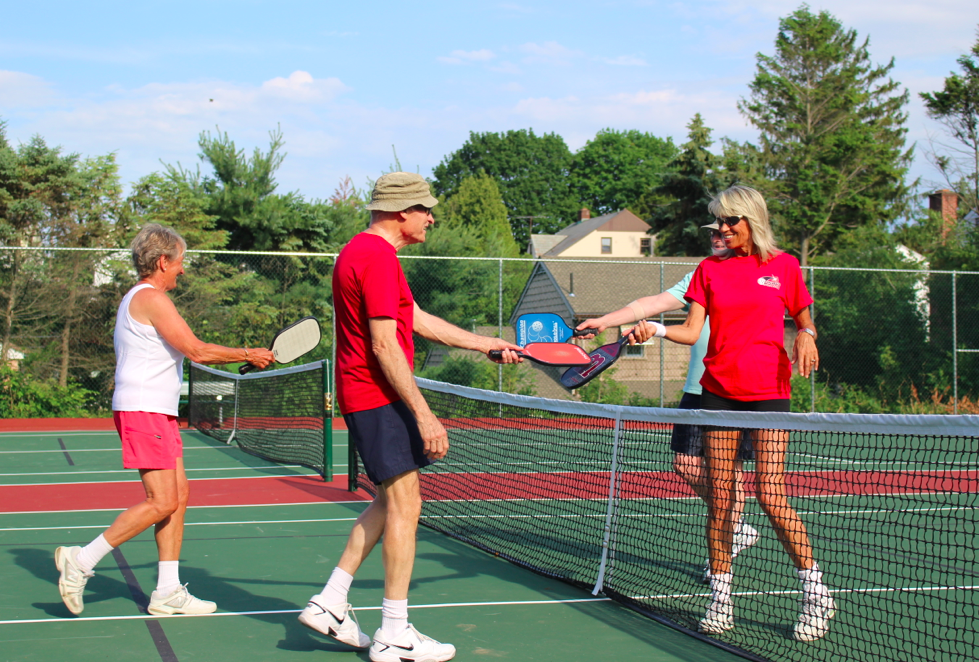 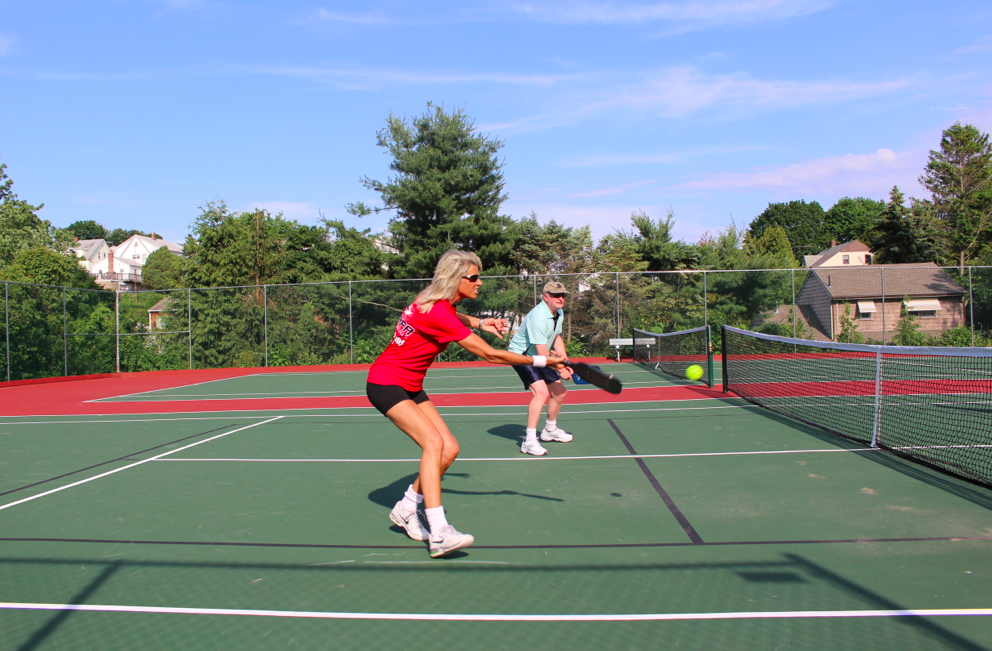 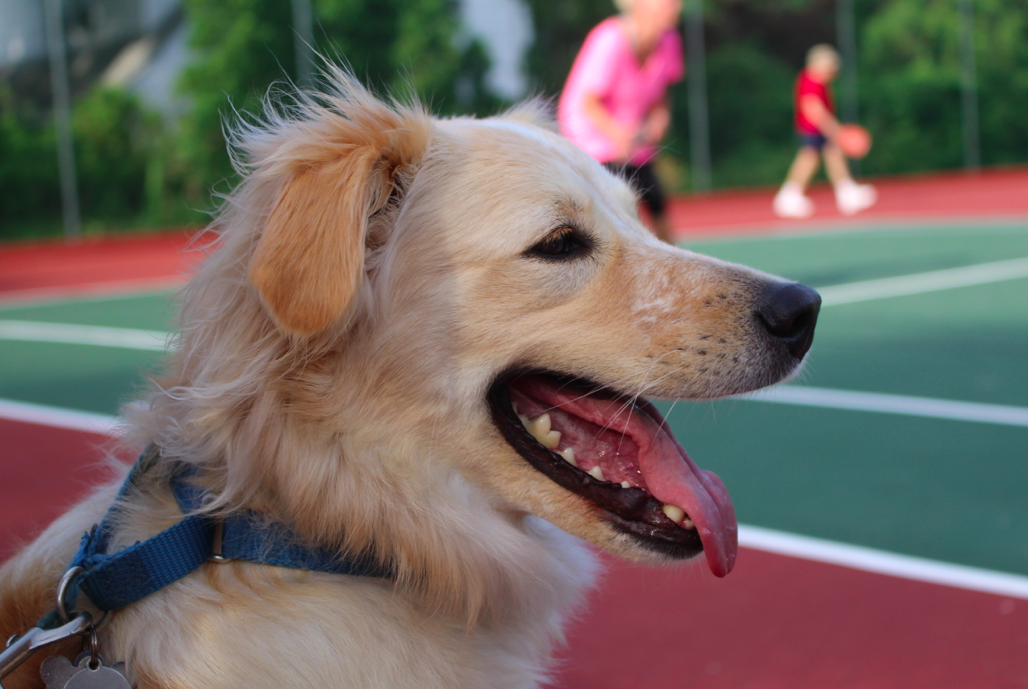 According to some lore, the name “Pickleball” was derived from the name of the Pritchard family dog, “Pickles,” which may or may not be true. Still, on a beautiful Wednesday afternoon at Christiano Field, it was a great excuse to photograph Mattie, a Georgia rescue dog belonging to Sara Rawson,who gave pickleball a try herself.

Joe Siciliano gave thanks to the Town and neighbors for their collaborative effort in making the pickleball courts possible. He said there was a need to restore the tennis courts, but that the neighbors helped move along the funding and approval processes.

“The process took probably about 1-1/2 years,” Siciliano explained just before he and Sue Snyder cut the red ribbon across the entrance to the courts.

“Pickleball brings in a new element for the use of the the courts,” Siliano said, referring to the courts at Christiano Field. “Plus we hope it’ll be infectious and that new people will come,” he said.

Snyder, the superintendent for recreation in Greenwich, welcomed a group of pickleball enthusiasts and neighbors to the ceremony.

“The town doesn’t normally make a big deal about the resurfacing of courts,” she said. “It’s actually done every few years, but this is a bit different. These are no ordinary tennis courts,” Snyder said, pointing out a set of darker lines that contrasted with the white tennis court lines.

“Joe worked with the Chickahominy neighbors,” Snyder said. “Just working through the budget and approval process and with the RTM, BET and putting a lot of time and effort into making it happen,” she added.

“Pickleball is popular with the older generation,” Snyder said. “But it’s also an ideal sport for children because the court is smaller. So if kids are too little to play on the full size tennis court —  if you’re young and small it’s easier to play on the smaller size court.”

Betsy Underhill gave brief overview of the rules of pickleball. She first pointed out the “kitchen line,” which is a line that keeps players at a distance from the net. “That’s the one major difference between tennis and pickleball,” she said. Scoring is more like badminton, she explained and serving is all underhand, which, she pointed out is ideal for anyone with shoulder problems.

For more on pickleball, check out the US Pickleball Association website.