In Monday night about 100 people wearing “RHA” stickers, short for Round Hill Association, attended the Inland Wetlands and Watercourses Agency meeting to object to an application for a development for cluster housing with a condominium arrangement, for 28 homes at 124 Old Mill Road, a property formerly owned by actor Mel Gibson.

The applicant proposes to re-subdivide 75.72 acres into two lots.

One would be 9.21 acres and would retain “Old Mill Farm,” the historic home formerly owned by the actor who had dubbed it “Wayne Manor” and lived there for 15 years.

The house is an Elizabethan Tudor built in 1927 by investment banker Charles L. Ohrstrom and architect Charles Lewis Bowman. The 15,800 square feet house has eight bedrooms, and according to an advertisement, features 16th and 17th century English oak linen-fold panel walls, a great hall/living room with a 40’ vaulted ceiling, museum quality stained-glass windows, quarter-sawn oak floors and a stone Rathskeller.

The second lot would have a Conservation Easement area of 31.24 acres, and if approved would feature 28 homes on 17 acres.

The 28 single-family houses would share a community center and pool, have a shared water supply and septic system, and be organized under a condominium type ownership, with a homeowner’s association.

The proposal is being submitted under two special sections of Greenwich’s Building Zone Regulations – the Conservation Zone and the Historic Overlay Zone for Historic Preservation. 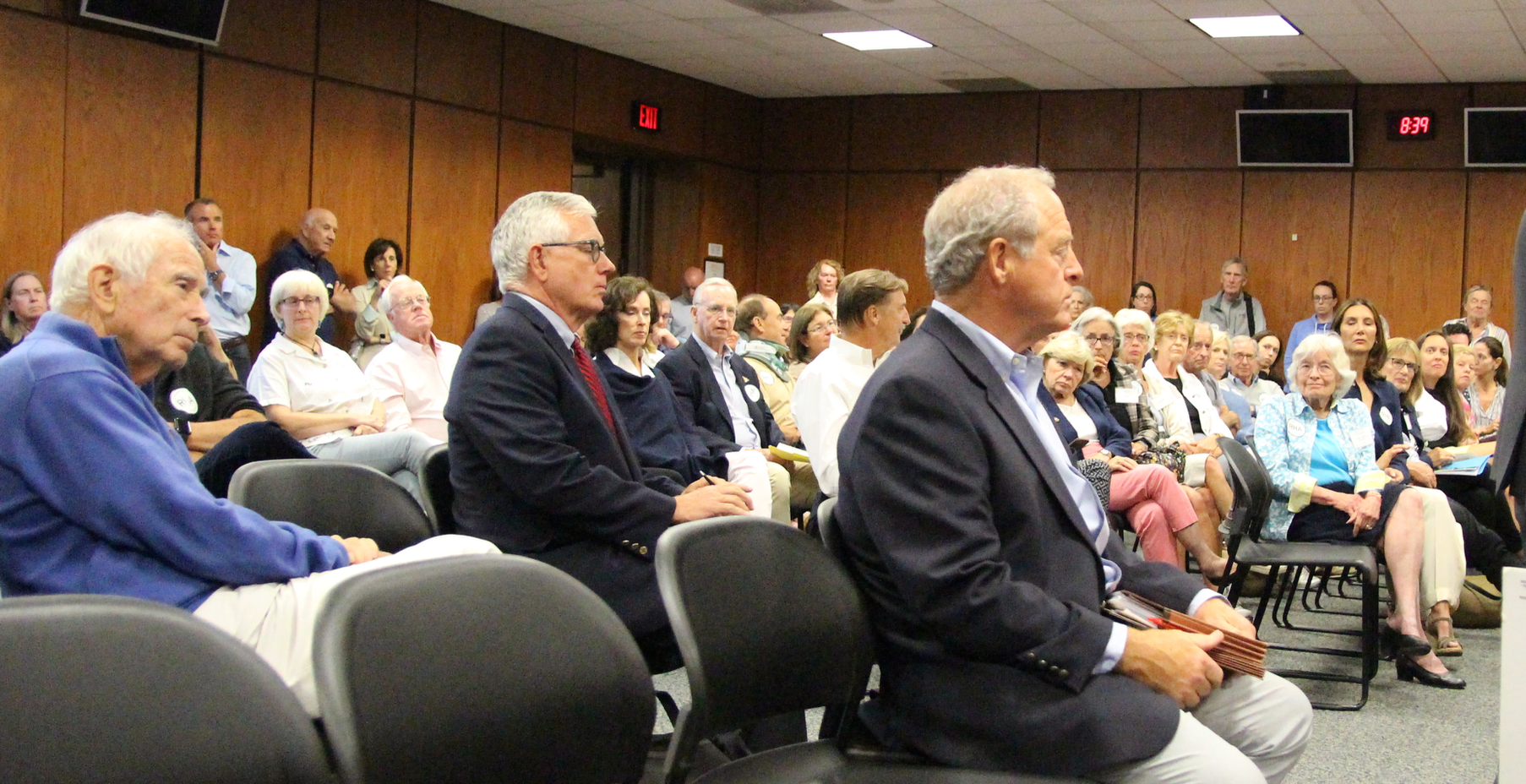 Vice chairman Elliot Benton asked members of the public to limit comments to issues regarding wetlands, and reprimanded them for loud applause more than once during the public hearing.

The site features a pond and watercourses associated with it.

The applicant proposes a community septic system, which is under review by State of Connecticut, as well as a series of rain gardens and retention basin.

Agency director Pat Sesto said the application was missing information and that the narrative lacked details about disturbance during construction.

She said that should have had far greater detail, and that alternatives with lesser impacts should have been submitted.

There were also concerns about unintended damage to the site including fragmentation of the forest and lack of a buffer plan.

Also, she said the application did not yet include construction plan specifics including where  construction vehicles would go, and what sites would be damaged.

Additionally she said there were concerns about the storm drainage system and noted the appropriateness of discharge points were inconsistent with state guidelines.

One member asked whether the detention basin would be interpreted by Amphibians as a vernal pool.

Attorney John Tesei said the  project will require approval of the Planning & Zoning Commission, who will consider the Historic Overlay, but not until after there is resolution with the Wetlands Agency.  He said the application is compliant under the HO regulations, and no variances are being sought.

“We appreciated Pat’s (Sesto) in depth analysis. …We believe that there is nothing really problematic for this project,” Tesei said to a round of laughter from the audience.

Tesei said the applicant appreciated the need for a robust sedimentation and erosion control plan.

“We believe the challenge is about how to handle construction. It’s very appropriate to receive a number of comments in this regard – for short term and long term impact. We agree a robust phasing plan is entirely appropriate.”

In response to Ms. Sesto’s comments about alternative plans, Tesei said that had been taken into consideration.

“You could have a horse farm, or a lot of impervious surface,” he said.

“The goal is to preserve the existing main dwelling, which has a lot of character,” Tesei continued. “There are other buildings, including a historic grist mill. The main dwelling is proposed to have a perpetual façade easement.”

“We tried to keep well away from wetlands. The buildings themselves are essentially 1-1/2 to 2 story buildings with footprints which are about 3,000 sq ft per unit in terms of first floor area,” Tesei added.

“Add it all up and compare it to what would be allowed under zoning regulations, you’d find this is actually a project that produces less potential impact than what could happen with other uses on the site.” – John Tesei, Attorney for applicant

Agency member Bill Galvin asked about the number of trees proposed to be removed from the property.

“There are supposedly at least 48 significant trees 12″ diameter or above, in the upland review area,” he said. “There are a lot of very big trees on this property, having walked it. Cluster housing supposedly has advantages – if the houses are going to be so close together I’d think you’d need to cut fewer trees. I think that would be a high priority, but I don’t get that impression.”

Tesei said the alternatives might involve loss of even more trees. 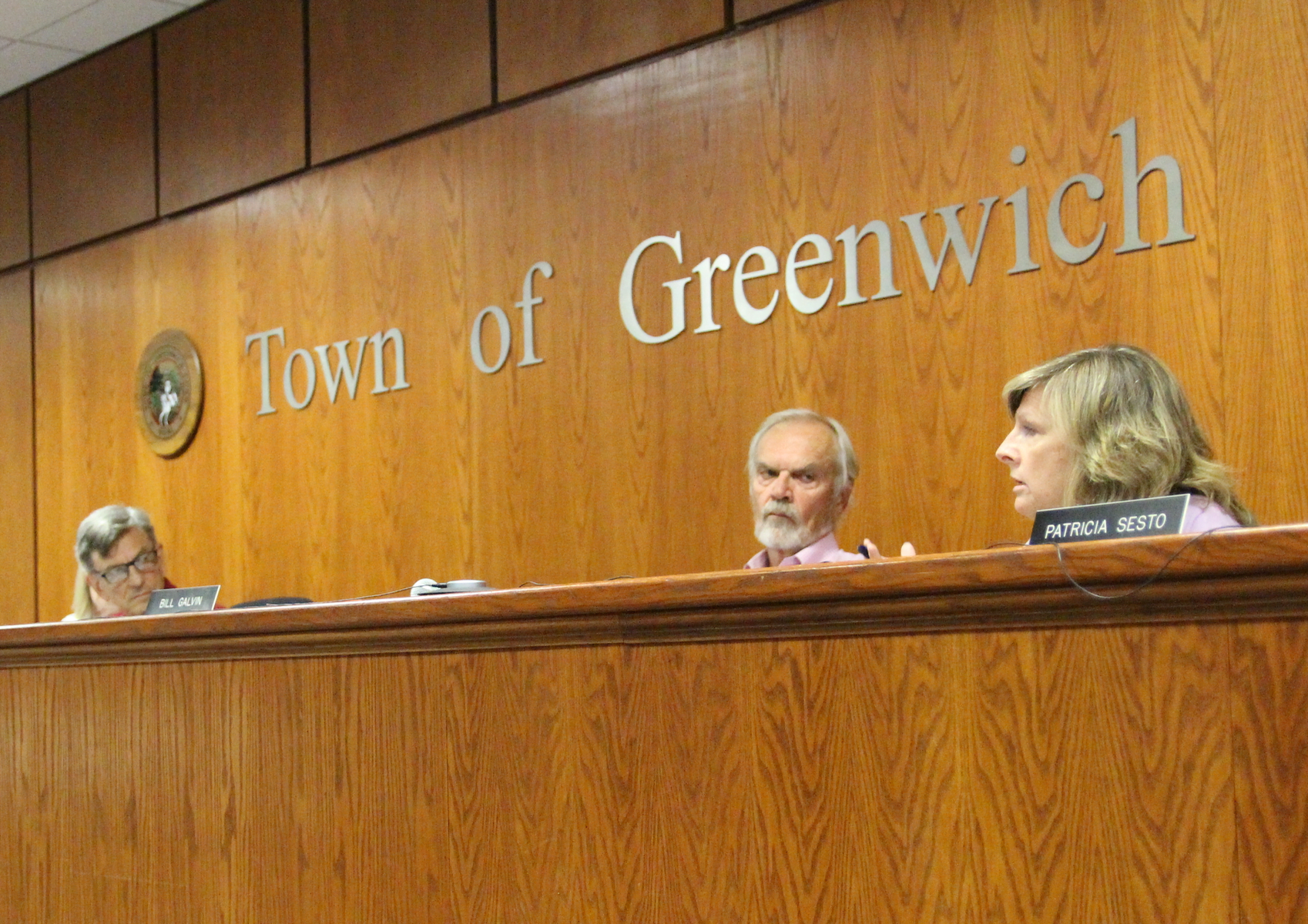 “We have catchment structures and basins, many of which I suspect are located in areas that will involve removal of trees,” Mr. Galvin. “The larger trees are a significant benefit to the ecology of the property.”

“I know we’ll show you a project that is a sound, good conservation project. But we’re not there yet. I know you’re not going to take the words of a lawyer.”

Director Sesto said the site plan should show trees as small as 6″ – not just 12″ and larger trees.

“You’re  providing water to these dwellings from community wells. How much water are you taking out of the ground?” he asked. “If you’re taking that water out of the aquifer, where is it being diverted from? Where would it otherwise go? To the ocean or wetlands?”

Tesei said the answer would come from Aquarion, who will manage the well as required by state laws. 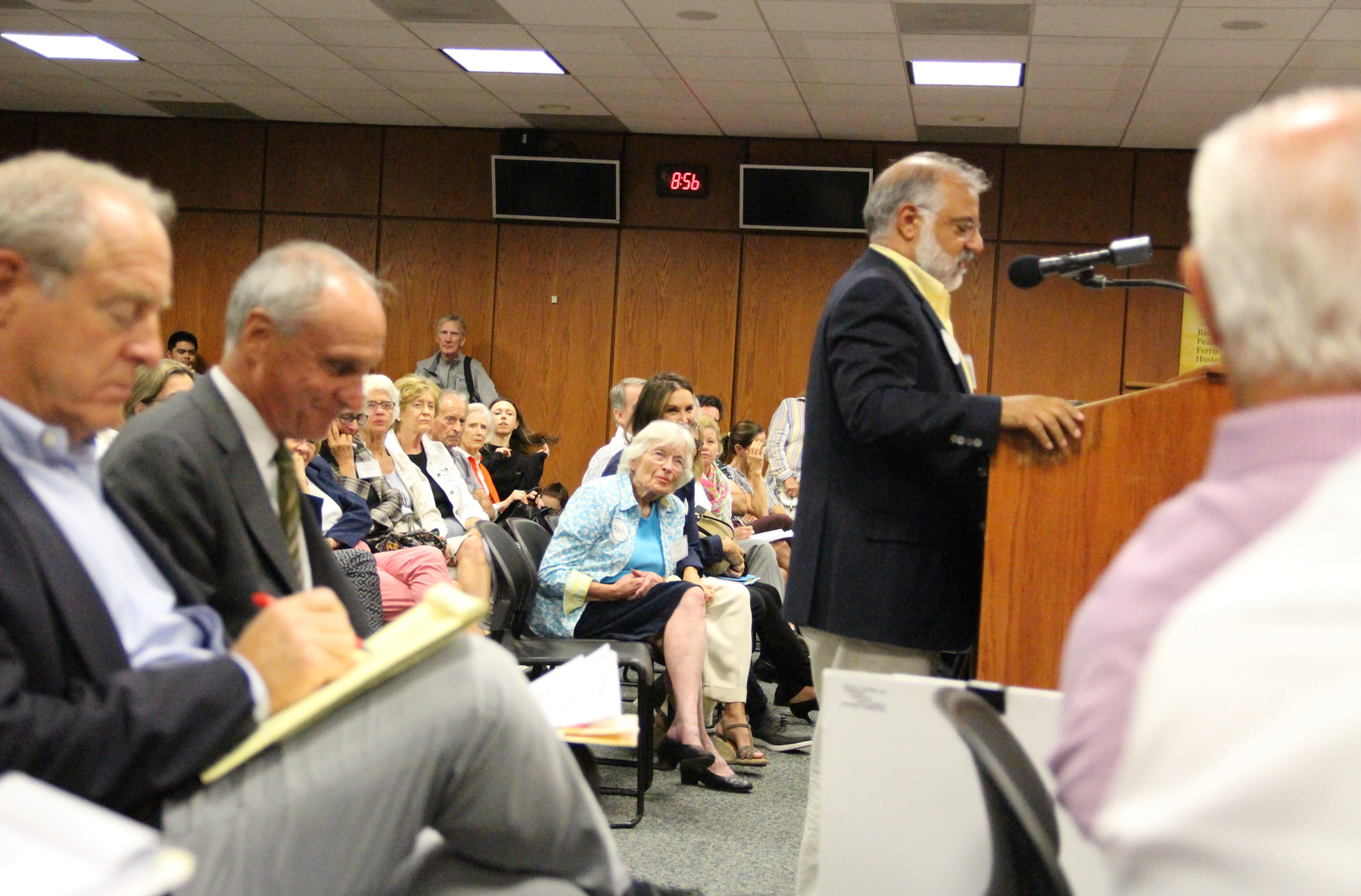 John Conte, a registered landscape architect, licensed arborist and past member of the IWWA introduced himself. He is also the president of the Round Hill Association.

Conte said his group held an emergency meeting with over 100 residents in attendance and received “a strong mandate to oppose the application.”

Though he said he would limit his comments to wetlands concerns, he noted that his board is “appropriately skeptical of developers’ broad-brushed claims.”

“There is a need for more analysis and alternatives that do not rely on what I consider outrageous density considering Historic Overlay incentives,” he added.

Conte said the application’s “colossal scale” had captured the attention of the entire town, and challenged the Agency to “see through rosy promises of an optimistic developer.”

“Hopefully you will send a message that this type of project is entirely out of sync. This type of density is not how to protect wetlands, even considering proposed set aside wetlands. It’s already protected by its topography.”

“Most of the land offered as a set-aside is already unsuitable for development. It’s a well crafted illusion.”

Conte said the applicant is developing 28 homes where there should only be a few, and that the septic system proposes a risk to ground water and wetlands.

“Failure of this system could be catastrophic. Sucking up enough water for 28 home and a wellness center, and an entirely new landscape is dubious at best. We wonder about groundwater depletion. I’ve experienced a dried up well. It’s a common theme in this neighborhood,” Conte continued, adding that storm water management would be an issue, with potentially polluted water discharged into wetlands including fertilizers, salt water and brine.

“Hold the line. Push back,” Conte urged the Agency.”Keep the public hearing open. Quantify the impacts.”

Johnathan Wong of Maple Avenue said he lived nowhere near the proposed development, but was concerned about the impact of upstream development on watercourses downstream including Horseneck Brook.

“If there were a failure of the septic system or detention system, water downtown could be adversely impacted,” Wong said.

Local realtor  Mark Pruner of Burying Hill Road said despite Mr. Tesei’s claim his client sought to be “fully transparent,” this application was on the agenda of the Historic District Commission in April, but the Round Hill Association was not advised of that meeting. “There was no information from the developer.”

Pruner said the space currently has four tax ID numbers. “That would allow four houses,” he said. “That is the alternative….Not 28.”

Pruner said he didn’t think the Historic Overlay regulations, passed as recently as February 2018, were being properly interpreted.

“It requires a high level of scrutiny. The Lake Avenue property owned by the water company has wetlands, as do the Helmsley and Warburg properties. All have major impacts on the wetlands,” Pruner noted.

The Agency members voted to approve a motion for delay. Mr. Tesei said the applicant planned to properly respond to the agency’s concerns.