On Monday night about 20 residents of Pemberwick and Glenville, in the area of Hickory Drive, attended a Wetlands meeting to express concerns over an application from Sound View Engineers & Land Surveyors for Yury Sofman.

The applicant also seeks to relocated a watercourse at 8 Hickory which has fringing wetlands.

The application does not propose a subdivision because the lots were already separate.

Clausi said the application requirements have been addressed, with the exception of there being only one alternative, and it does not show an alternative location for the proposed house.

“Perhaps a variance could be obtained from ZBA to allow the house be shifted closer to the road,” he suggested.

He said another alternative might to preserve all or some of the watercourse the applicant proposes to eliminate.

Clausi described the proposed elimination and creation of the watercourse as a very significant activity.

He said the applicant has an obligation to show there is no prudent and feasible alternative.

The applicant proposes to remove two dozen large trees from the upland review area, across the two parcels, to accommodate construction and grading, and to change the plantings from a large tree canopy to a low shrub situation with scattered trees.

“The change in cover type has not been justified by the applicant,” Clausi said.

Also, he said the applicant’s proposal to mitigate for the 1,009 sq ft of wetland watercourse proposed for elimination is to create 1,190 sq ft of new watercourse channel and emergent wetland.

“We need more information regarding the configuration of the watercourse channel. This channel is shown going down at a 15% slope. There are a lot of rock outcroppings on the slope.

“The slope is  uniform, so if the channel fails to contain the flows, there could be sedimentation to the eastern portion of the pond side watercourse,  impairment to drainage structures connecting the property to the Byram River, or adverse impacts to abutting properties down slope.” – Robert Clausi, Senior Wetland Analyst

Clausi said the existing watercourse channel near the house has eroded banks.

“I recommend this agency delay this application, but note that failure to bring alternatives in a timely manner may lead to the denial of application as incomplete,” he said. 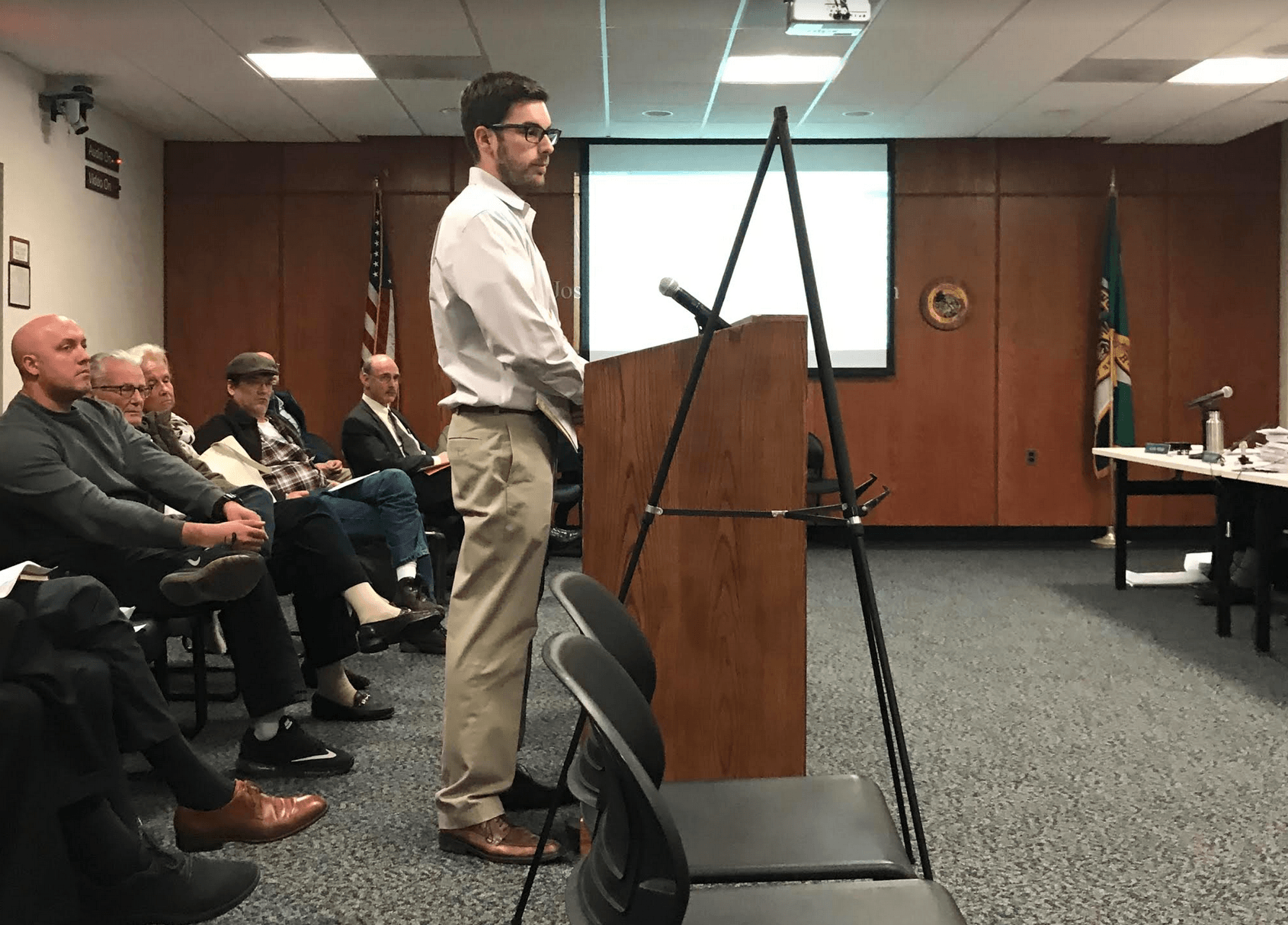 Licensed professional engineer with Sound View Engineers, Bryan Muller, representing the applicant, Yury Sofman, said, “We are going to be working diligently over the next month to bring in an additional alternative.”

“The existing stream channel’s placement is terrible and creates scouring and erosion and needs to be reworked. An alternative would also be to do nothing. We’ll take the delay and come back next month to answer your questions,” Muller continued, adding, “We’re making the new watercourse better than existing. We will analyze the whole watershed.”

During public comment, Cindy Lyall, whose home is behind and below the proposed houses, said she feared an adverse impact.

“The change in grading and elimination of watercourse are troubling,” she said. “My property and neighbors are in an incredibly vulnerable position.”

John Sayers of Caroline Place agreed and said any changes to the stream would be troubling.

“It’s a steep slope, and a lot of water comes down that slope,” Sayers said. “It’s a lovely little stream….Knocking down trees that have been there for 5o years is troubling to me. The water is coming right at us.”

Elana Gershon, whose property on Hickory Drive borders the proposed new houses said she trees would be irreplaceable.

“They are beautiful old trees. An amazing amount of wildlife lives in the trees,” she said, adding that there are night owls nesting in them. “I don’t understand how you can squeeze two properties in there without disruption.”

Scott James, also a resident of Hickory Drive, noted 20 neighbors were present at the meeting because the proposal represented a significant change for the neighborhood.

“We’re not experts on plans, but we know there are significant changes and repercussions, including removal of trees and large rhododendron bushes,” Mr. James added. “The stream runs 24/7 and there is a lot of water above…The previous owner was over there unblocking it all the time and was meticulous.”

“You’re testifying that the stream is not intermittent?” vice chair Elliot Benton asked.

“It flows 24/7,” Mr. James replied. “I guess there are springs further up because the people on the other side of Hickory also have issues.” 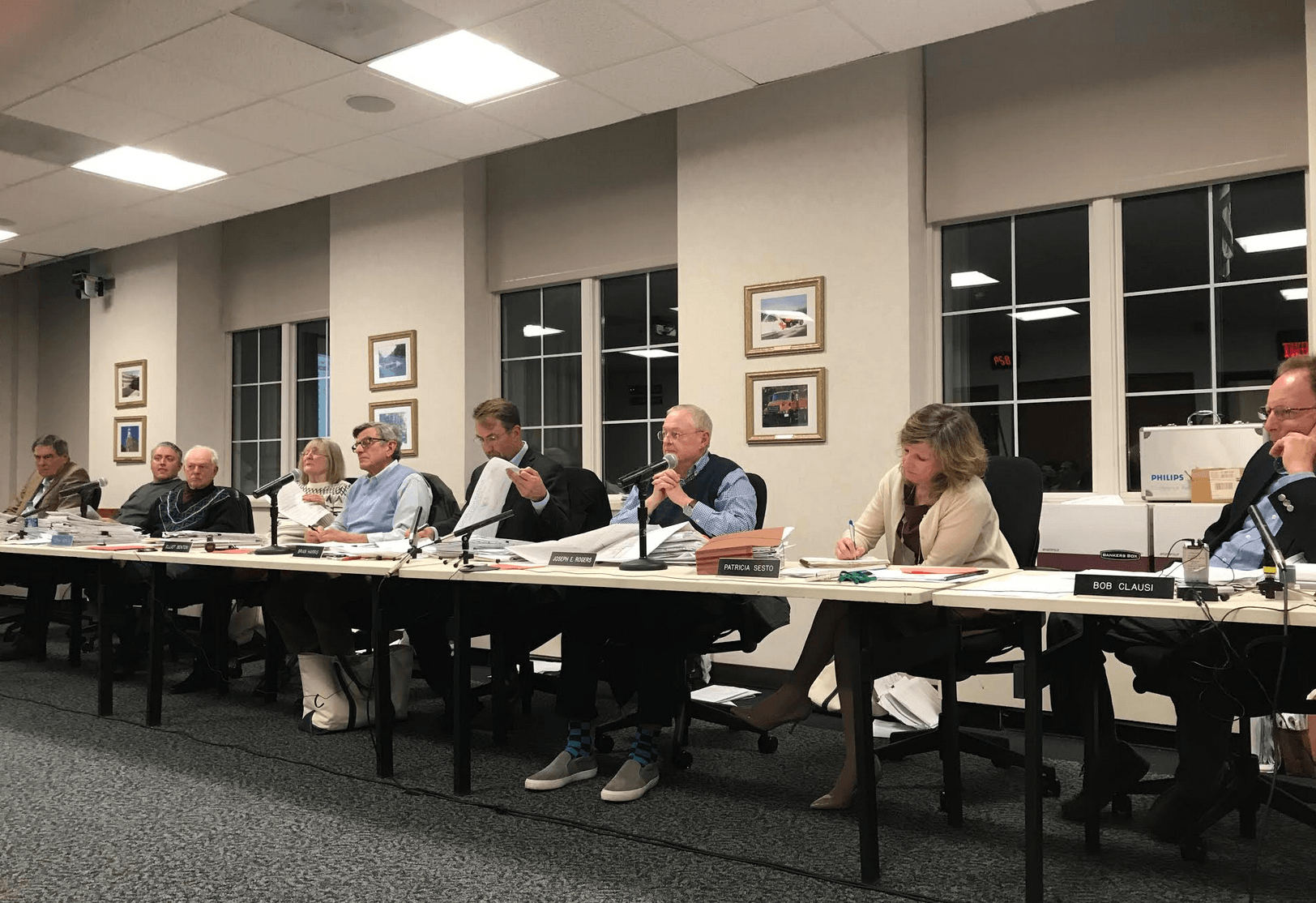 Mark Heminway said considering the Byram River is filling up, he was concerned about any waterway. “Please make sure anything they disturb doesn’t roll down into the river,” he said.

Bill Elam of Caroline Place said he had to rebuild a stone wall twice because of changes that had been made to an upstream property. “Even after a little rain storm, you can hear the water rushing,” he said.

John Kowalski of 1 Hickory Drive said more water comes from over the state line in Port Chester, and that one neighbor who made changes to his house created significant impact to the neighborhood.

After public comments, a motion to delay was seconded and the application will be continued, likely to March 23.