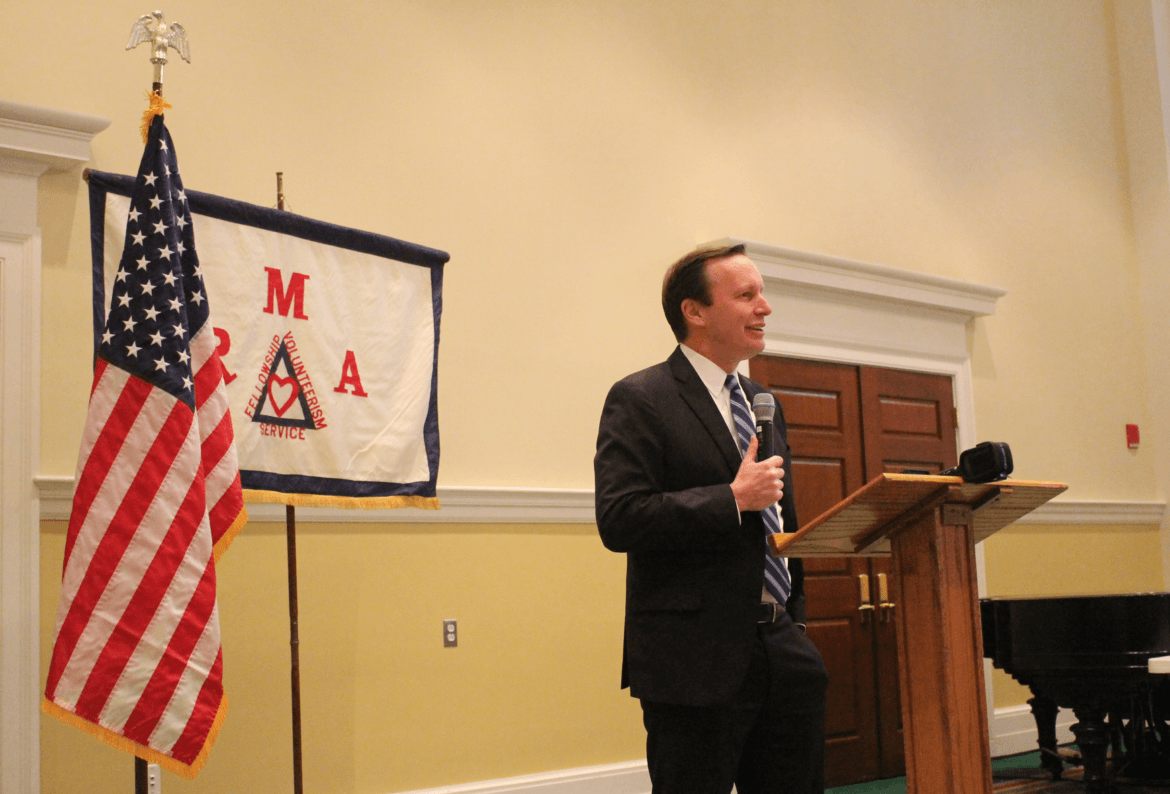 US Senator from Connecticut Chris Murphy addressed a standing room only crowd at the Retired Men’s Association at First Presbyterian Church on Wednesday.

Murphy, who attended Williams College after attending public schools in Connecticut opened his comments by saying, “This is a trying time, an unprecedented time.”

“There is a conversation happening in the American public about our faith in the American democracy,” Murphy said, adding that many citizens had become disappointed at how it takes a long time to get things done.

“A lot of Americans looked at democracy over the last 10 to 15 years …and thought it looked more inefficient as ever as they watched cable news cover the dysfunction of Washington,” he said. “Then they saw this economic recovery that seemed to accrue to only a small percentage of Americans, and their lives seemed more miserable even after the economy technically recovered.”

“And then they get a candidate who uses a ‘CEO model of government’ that looks different… and people gravitate toward that message in part because there is this tiring of democracy,” Murphy said. 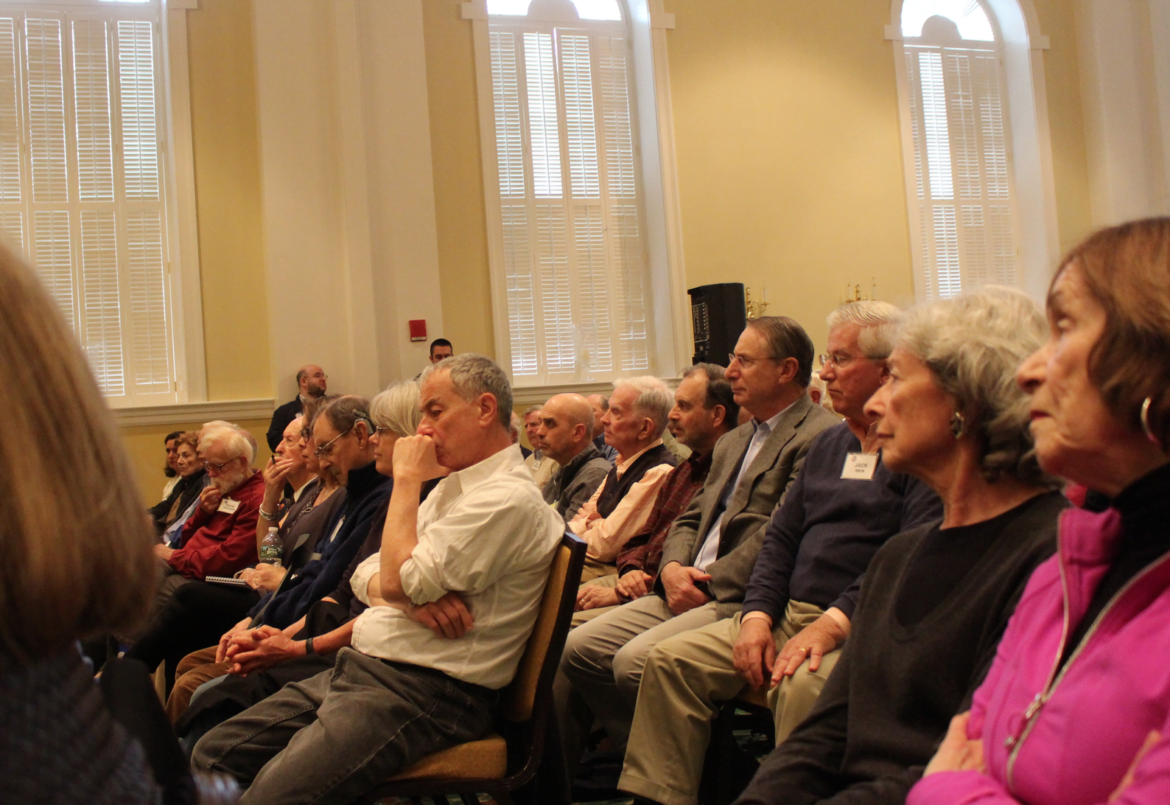 Murphy said there is evidence that the United States democracy’s system of checks and balances has worked in some instances, but not all.

He gave as an example President Trump’s immigration order that discriminated against people based on their religion or country of origin, and how it was ruled unconstitutional by courts.

“That important check by the judiciary held,” he said.

Murphy commented on the Trump administration’s proposal for a new health care bill to Congress to replace the Affordable Care Act.

“Republicans and Democrats both said my constituents will not re elect me if I vote for something that raised premiums and throws 24 million people off insurance,” he said. “That legislative check worked.”

The Senator said the system of checks and balances has not worked as well when it comes to foreign policy.

“Whatever you thought of that targeted military strike in response to the chemical weapons attack, there’s really no way to argue that was legal. There’s no existing authorization for that kind of activity,” he said, pointing out that there is a slow buildup of troops in Syria. Murphy, who described the situation as “incredibly dangerous,” lamented that Congress has deferred to the executive branch in the fight against ISIS and Bashar al-Assad.

Murphy talked about how the media has contributed to a “sorting of America” that happens when citizens visit websites that align to their political viewpoint.

As for President Trump, Murphy was blunt when he said, “I’m going to fight this guy like heck when I think he’s wrong or reckless.”

Asked about working in a conciliatory fashion, Murphy said much of his work under the new administration is “oppositional.”

Still he said, “I’m going to continue the spade work.” Murphy gave as an example the two years he spent working with Republican Bill Cassidy on the Mental Health Reform Act of 2016, which passed. 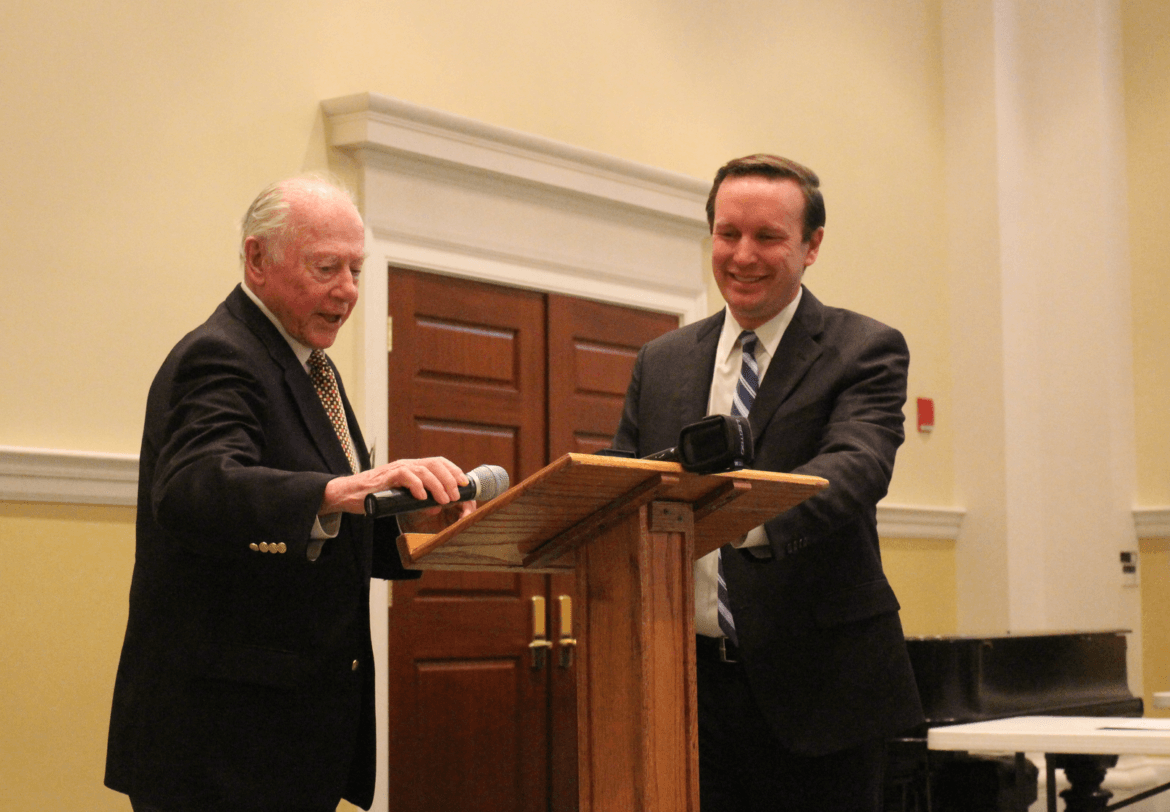 Asked to comment on gerrymandering of districts, Murphy said it’s important to work on process reform. “The people have to take over here,” he said, adding that former Attorney General Eric Holder is leading an effort toward this end.

“Too many members of the house come from ‘safe districts,'” he said, adding that citizen referendums are key and that many states, including California, allow them and that can change the way districts are drawn.

Asked about tax reform, Murphy said that both Donald Trump and the Republican majority have advocated tax reform. But, he said, “I have no idea what they mean.”

Murphy said his version of tax reform would be to reduce taxes on corporations by instead taxing carbon.

“We need to promote investment in renewable energy, so why not put a premium or tax on carbon that raises the same amount of money that you cut the corporate tax rate.”

Asked about income disparity in the US, Murphy said the key to reducing the gap is to invest in education, in turn making economic mobility possible. However he said, high education has become an expense out of reach for many.

“I want a radical rethink of the way we incentive people to go to college and how we pay for them to go to college,” he said, adding that today, workers need some form of advanced degree to succeed.

On the topic of foreign policy, Murphy the Trump administration is “dangerously improvisational.”

“You have created absolute and total confusion in the world, especially among our allies,” he said.

Using Syria as an example, Murphy said, “We handed Syria over to Bashar al-Assad. Then we took it back and suggested there was no future of Syria without him, and then we handed it back again and seemed to settle on a policy in which Assad could have Syria, but put him on notice that if he used one particular type of weapon to kill civilians that we would respond with a fairly small pin prick attack.”

“I’d love for him to understand the value of combating Russia, not just with tough talk, but with energy  independence funding for countries on its periphery that don’t want to be forced into Russia’s orbit by relying on their energy and their gas.”

Asked his opinion on minimum wage, Murphy said he advocates steps toward a $15 minimum wage, starting with a $12 hourly wage first.

He gave the example of Seattle where restaurant owners initially balked, but that ultimately when the minimum wage increased, the result was that more people were spending money in restaurants.

Former First Selectman Richard Bergstresser asked about the negative view of the US around the world.

“What has caused the tempest on trade …people see free trade as a threat. There are top line statistics that show  that the balance of trade has benefited the United States, but that is not filtered down to the American workers,” Murphy said. “We haven’t given those people any answer.”

At the same time he said that as jobs have gone overseas, it has  become more expensive to get a degree that leads to a newer king of job.

“We’ve made the pathway to a better life – higher education – less affordable then ever before…People just feel totally abandoned.”

“People understand that the economy is getting more global,” he said. “They understand that we’re not going to make rubber balls in this country any longer, but they want to know that there’s a plan for how they get the jobs in the new economy.”

Murphy received a question about Bill 27 for an independent commission to investigate the Russian manipulation of the US election.

“The Russian regime – they’re not Republicans,” Murphy said. “They’re not in the business of helping the Republican party…. two years of four years from now, don’t assume the Russians wouldn’t weigh in on the other side.”

“There has to be repercussions for the individuals who were involved. If you’re openly conspiring with a government to try to change the result of an American election, that starts to fit the definition of treason,” he said. “There also needs to be ramifications for Russia.”

On the topic of North Korea, Murphy said, “Trump is shooting from the hip on the rhetoric he is using.”

Murphy said President Trump understands that the path to a non-nuclear weaponized North Korea is through China.

But, he said, “The way in which he has thrown around the suggestion of a major military strike, or a US invasion is not terribly helpful.”

Murphy responded to a question about cuts to foreign aid, saying that many Republicans including John McCain, Lindsey Graham, Marco Rubio and a new senator from Indiana, Todd Young, understand the value of foreign aid. He said the budget emerges from Congress will not likely include a massive cut to the State Dept funding, and might even include an increase.

Murphy asked attendees to go to his website to see his policy piece called Rethinking the Battlefield.

“It’s hard stuff fighting propaganda online, trying to convince countries that you shouldn’t sign up with China, that you should sign up with us instead, convincing countries that are starting to spiral out of control, that an economic development deal with the US  that causes you to start to invest building out of democracy and the rule of law is a worthwhile investment. That’s hard power. We’re not going to win the fight internationally if we simply view our capabilities through the military.”

We have more working in military supermarkets than we have diplomats int he state department,” Murphy said, to a round of applause.

John Blankley, a member of the Town’s BET, asked Murphy to comment on infrastructure. “Can you bring home some bacon?” he asked to a chorus of laughs.

Asked about the popular vote versus the electoral college, Murphy said two of the last three presidents won office with a minority of the popular vote. He added that he would support a constitutional amendment toward that end.