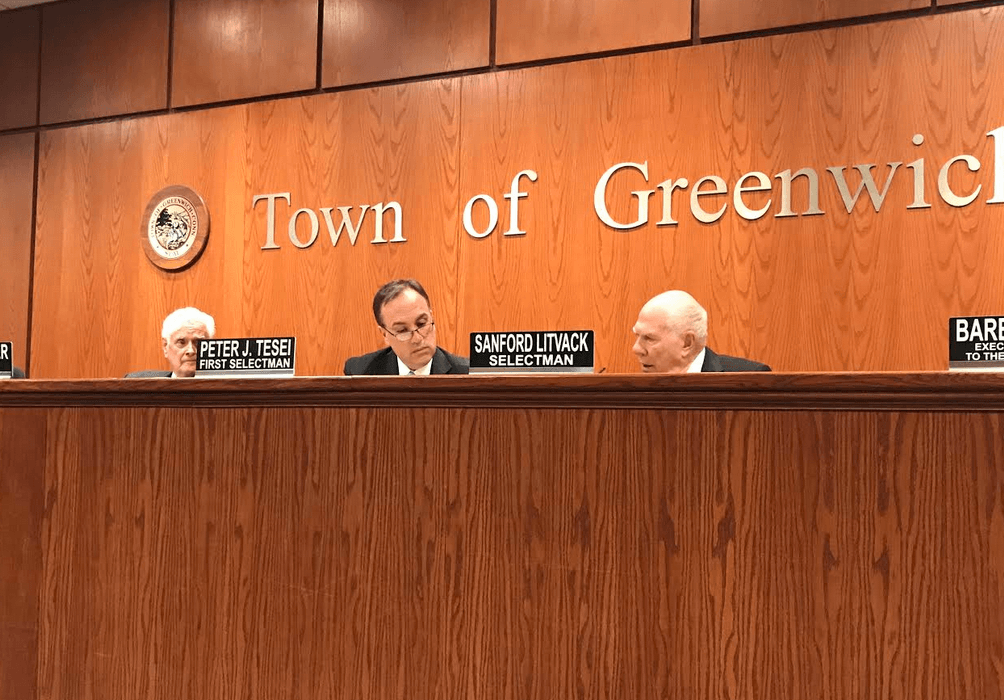 On Thursday during the Board of Selectmen meeting First Selectman Peter Tesei, during his updates, brought up the topic of town audits and recent articles in the media.

“After three different comments, I have to put this into the public,” he said. “There have been comments made about suppressing audits, and not releasing audits.”

Speaking about parking services, he said there had been several audits of that department over the years, and that comments in the media about the Board of Selectmen suppressing audits were unfounded.

“The BET has control over audits, not the Selectmen. They hire internal and external auditors. In that one, (parking services) both were engaged,” he added.

Tesei said after a clerk, Michael Gordon, was arrested for stealing from the parking services department, and a parking services audit was published online, the state’s attorney at the time, Richard Colangelo, wrote to town attorney Wayne Fox asking that the audit be taken down from the town website immediately, and that it was not “suppressed.”

Tesei read aloud from Mr. Colangelo’s request to Mr. Fox, saying the audit was published online “without any thought to the criminal case,” and should not be disclosed, but rather sent to the police.

Tesei said the topic of audits had become politicized by the media.

“If there is any doubt that the audit function has become political, look at a piece by Bob Horton,” he said referring to the Greenwich Time opinion columnist.

In an opinion piece by Mr. Horton on Aug 25, he referred to a 10-page parody written by town internal auditor Melinda Frame, who has since been terminated, about her experience auditing parking services: ‘Totally True Tale Written for the Not Very Industrious and/or Bright: Follow Up Audit Report to Another Audit Report Written Before This Report.’

“I am not making any of this up,” said Tesei, adding that Mr. Horton is a Democrat.

“This came to light recently through issues that the Finance and HR departments had to deal with, and it confirmed what I thought all along – that there was a breach of partiality in the audit function.”

Democratic Selectman Sandy Litvack who is running for a second term, said Colangelo’s letter was sent in 2017, which was when he was running for Selectman.

“I did not talk about suppression of any report. What I said was I couldn’t imagine a situation in which there was an internal audit over several years and none of the steps required to remedy the deficiencies were taken,” Litvack explained, adding that what he had pointed out was that a parking services audit turned up 17 deficiencies and only three had been addressed.

“As a corporate executive I could not conceive that recommendations form an audit had not been implemented. I had seen the report. It was in the public domain. My criticism was over the failure to act. I still don’t know that all those things have been addressed,” Litvack continued, adding, “I said at the time that would not be tolerated by me. It was not tolerated at Disney. That was my criticism. It was not a matter of the state attorney or anything else.”

“If we start to talk about it, it seems we are in a political season, and when you hold a position, you are a target,” Tesei said, adding his integrity had been impugned despite his 32 years in Town government, of which many were as a volunteer.

Tesei went on to talk about Leslie Moriarty without mentioning her by name, saying she had questioned his motives on the Greenwich railroad station redevelopment during a BET workshop on the redevelopment.

“I thought she used to be a very respectful member of government and a former BOE chair. They want to look into the draft agreement of Greenwich Plaza because there was some ‘self-dealing,’” he said. “And wouldn’t you know, it was followed up by a guy named Snyder accusing me of the same thing.”

An October 8 letter to the editor from David Snyder of Old Greenwich who talked about the difference between the role non-profits and philanthropists play in public-private partnerships, versus the “perils” of partnering with a stakeholder motivated by profit. He said often times the municipality is left “holding the bag” for long-term costs.

Snyder suggested that with the railroad station redevelopment, Greenwich would be relinquishing an asset, air rights, without knowing whether what the town gets in return is equivalent in value.

“The current Republican administration negotiated with the developers behind closed doors and presented the project to the public as a fait accompli,” Snyder wrote, adding, “The lack of transparency and a nuanced understanding of the weaker aspects of the deal suggest incompetency or worse.”

“Whatever the motivation behind this Republican administration’s efforts to fast track this proposal behind closed doors, the result is an embarrassing miscalculation that illustrates well the need to have highly qualified and capable officials ensuring that PPPs are being negotiated to protect the interests of tax payers,” Snyder wrote.

Tesei said despite his integrity having been impugned with insinuations of self dealing, he rose above it to defend Litvack from attack when he and his wife Joanna Swomley were targeted by an email accusing them of self-dealing in the quest for a northwest fire station.

“When your integrity was questioned by an anonymous person in a dirty tactic saying you were for the sale of Fairview for a northwest fire station because it would benefit you and your wife, and I was outraged,” Tesei said. “It was despicable and I said so. I’m asking for the same level of courtesy and respect.”

“Washington has come to Greenwich and it’s not a very good day for our town. People have to stop casting aspersions. Let’s pull the scab off the wound. Bob Horton is a registered Democrat who lives in Fairfield. He has a personal animus toward me, perhaps an infatuation. It speaks to who is driving this. It’s our press who don’t get to the bottom of things when they were given them.”

“I happen to like Sandy. We get along fine but politics has a way of infecting relationships,” Tesei added.

“I never thought you had a personal take in it, or that you were being bribed. I think to put a better spin on it, there is criticism and it may be legitimate, based on the fact that the whole transaction was not done as publicly as it should have been,” Litvack said.

“That’s not to say you had a personal reason for doing it the way you did. Suggesting you had a personal stake in it is not fair,” Litvack continued. “As long as we are relating conversations we had, I thank you for standing up for my wife and I.”

Still, Litvack reminded Tesei that during the 2017 election there were attempts to tie him to Harvey Weinstein.

“You had done something similar to me by trying to tie me to Harvey Weinstein. You sunk low and did something inappropriate,” he said.

“We are doing something ‘Trump’ as we blame the press,” Litvack added.

“It was a cathartic experience when I talked to you a couple weeks ago,” Tesei said. “But there is value to this. …It’s not going to stop with us. It’ll go on and on. It’s not the community I grew up in or want to continue to live in.”