The budget includes $5,000 to pay Catalano and Sons, the Town’s vendor on record, to remove moorings of those who have not paid a a mooring permit fee.

Mr. Mazza explained there is no incentive for boaters to pay the fee because there is no enforcement under the harbor master, and that the harbor master refuses to share a comprehensive list of names of boaters who have paid the registration fees for permits, along with the corresponding mooring coordinates.

“As far as we know, he has not permitting a mooring in four years,” Mazza said.

First Selectman Tesei said Mr. MacMillan is not fulfilling his obligations, but that town is unable to force him to do so because the harbor master is a state appointed official. Mr. MacMillan was appointed by Governor Dannel Malloy.

Mazza said that this year, the HMC plans to work around the harbor master and send out applications on their own.

“We will buy stickers and tell everybody this is your mooring registration sticker. Put it on your mooring,” Mazza said, adding that  those who don’t pay risk having their mooring hauled out of the water at the direction of the HMC.

“If we have stickers on the mooring ball, we know what someone has paid. If they don’t, we’ll post it with a notice that within a week or two weeks, we’ll haul it away,” Mazza said. 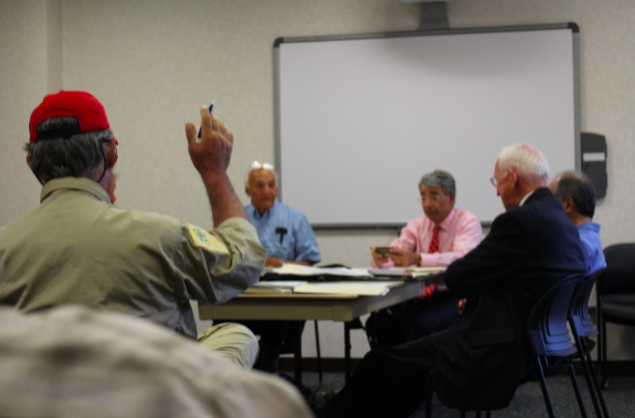 “He said he can’t permit a mooring until the harbor management plan is complete,” Mr. Mazza explained to the Selectmen, referring to the harbor master.

MacMillan’s reluctance to share the list of names of mooring coordinates has been an issue for years.

In June 2014, patience unraveled and there was shouting during a HMC meeting as members repeatedly demanded that MacMillan turn over his list.

In an October 2014 interview with Mr. MacMillan told Greenwich Free Press that without a state approved plan, the Town has no binding effect over his activities.

Furthermore, MacMillan said, “I told the Selectmen three years ago that if you are going to have a mooring fee, it must be associated with a plan for improvements to the harbors, and an appropriate budget.”

MacMillan said that without a Harbor Management Plan and goals related to the harbor, fees collected are effectively going into “a slush fund that shows an improper profit.”

“Of the 2,423 CT state registered vessels in Greenwich, about half are paying into the harbor management fees. People who do not have moorings or town operated dock slips are not required to contribute to enjoy the waters of Greenwich. In other words, the red heads are paying for everybody else,” MacMillan said in the 2014 interview.

Salary for Harbor Master?
On Thursday morning, Mr. Mazza said some members of the HMC were advocating for a town salary for Mr. MacMillan. Currently Mr. MacMillan receives a stipend of about $500. Also, the town pays to maintain a harbor master boat, provide secretarial services and cover the harbor master’s phone bill.

First Selectman Tesei asked why the town would consider creating a salaried position for the state appointed harbor master who is not fulfilling his obligations.

“I will not be supporting providing resources for that reason,” Tesei said, adding that to become a town employee, the harbor master would have to go through background checks and a medical examination, for example. He said the level of scrutiny would be higher than that of a state appointee. 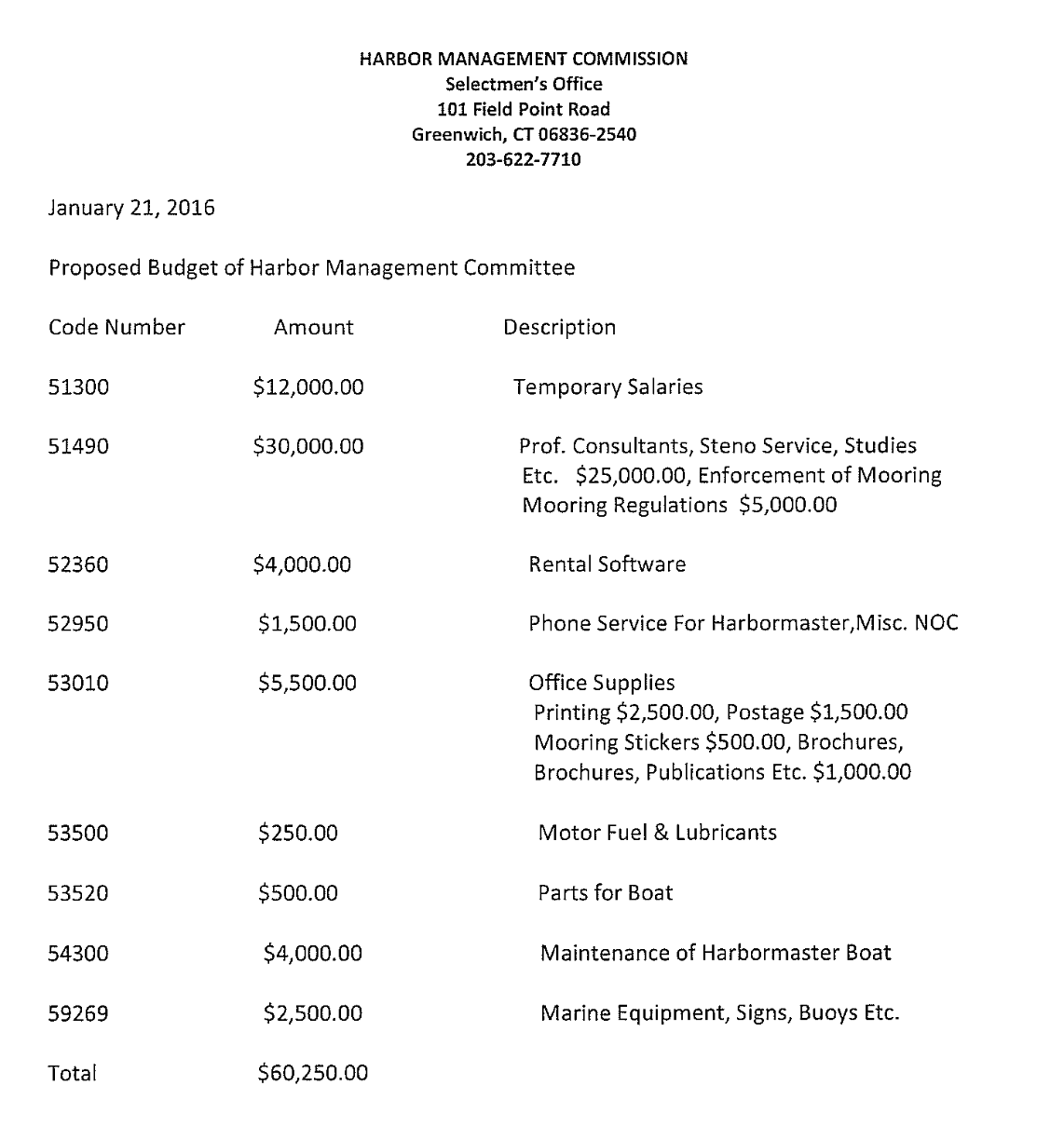 “We thought we were going to make progress last year when the Harbor Master promised to put a sticker on each mooring, but he didn’t,” Mr. Mazza said, agreeing that people aren’t paying for moorings because they have no incentive to do so.

Mr. Mazza said that last summer, when asked for the list of names of mooring holders, Mr. MacMillan had requested to be paid for it.

“That sounds like extortion to me,” Mr. Tesei said. “Arguing with Ian is an embarrassment to the town,” the First Selectman said of repeated efforts to acquire the list. 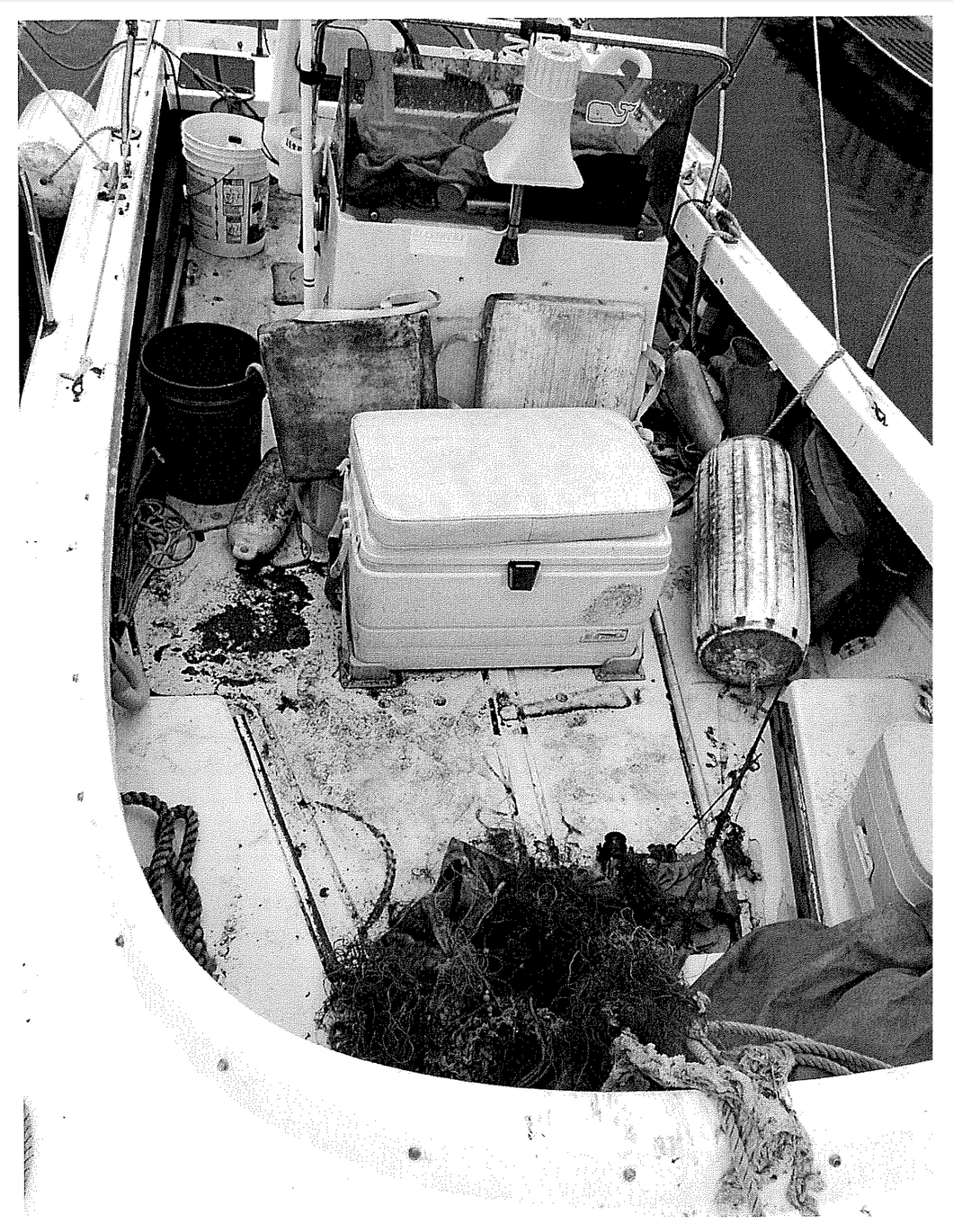 Attached to a letter submitted to the HMC by member Bruce Angiolillo, a photo of the condition of the harbor master boat when it was turned in to the Town for decommissioning and winter storage.

A look at the draft minutes of the Jan 19 HMC meeting suggests that frustration remains high. Minutes reveal HMC member Bruce Angiolillo balked at Mr. Quigley’s suggestion that the harbor master be paid a salary, and that he shared both a photo of a filthy harbor master boat and a letter lambasting MacMillan for refusing to turn over his map of moorings made with GPS technology, which he referred to as unethical and illegal.

The letter goes on to characterize MacMillan’s refusal to work cooperatively with the HMC as insubordinate, counterproductive, and undermining. Mr. Angiolillo’s letter says that the photo of the boat reflects on the harbor master’s professionalism.

The draft minutes report that both Mr. Quigley and the harbor master left the meeting in protest.