On Friday at Greenwich High School about 800 students filled the performing arts center for a debate among the four selectmen candidates.

The forum was co-sponsored by the Greenwich League of Women Voters and We The People, which is coached by social studies teacher Aaron Hull. 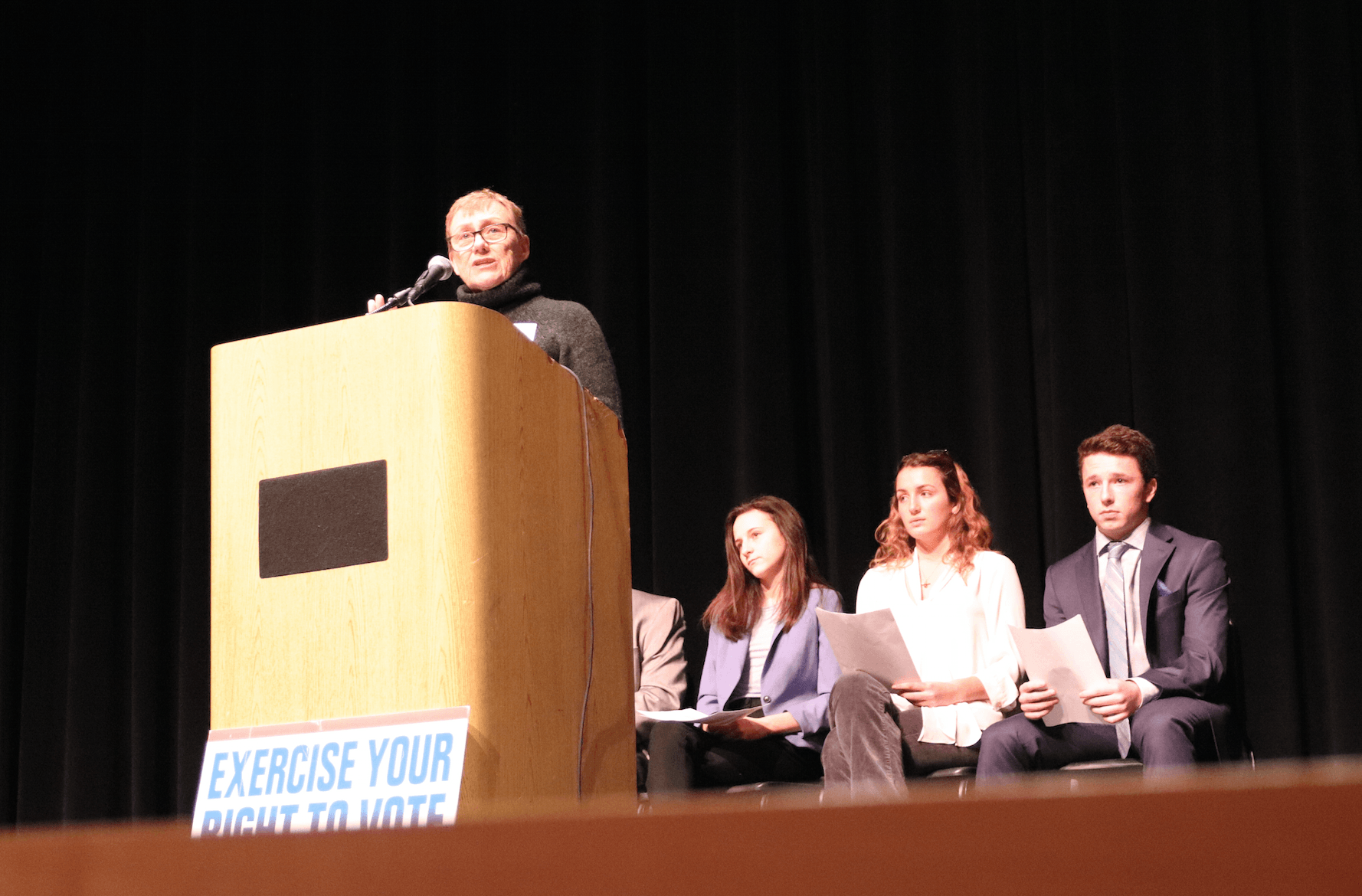 Sandy Waters, the president of the LWV Greenwich, said voters age 18-25 vote in smaller numbers than any age group. “When you turn 18, register to vote. Vote every election, every time,” Waters said. “Whether you are in college or not. Be informed. Know what the candidates and develop opinions on the issues.”

Trump/Camillo “Make Greenwich Great Again” Signs
Mr. Camillo was asked how he felt about President Trump in light of the mysterious signs that went up a week ago that said Trump/Camillo.

Ms. Oberlander, the Democratic candidate for First Selectman was asked whether she thought voters should consider national issues when they vote locally.

“How do you feel about President Trump? If you were elected, how would your leadership be similar or different to his presidency,” Wyatt Razdin asked Mr. Camillo.

“Teddy Roosevelt was my favorite President and I would have objected if it (the signs) said Camillo/Teddy Roosevelt,” he replied. “I did not authorize it. The person who did it hid in the shadows, and was intending to harm someone politically. And he only admitted it when he got caught. It’s misleading. It’s deceptive.”

“I have to take care of Greenwich,” Camillo said. “That’s what people expect me to be focused on.”

Ms. Oberlander said local voters have the right to consider any issue that’s important to them when they go to vote. 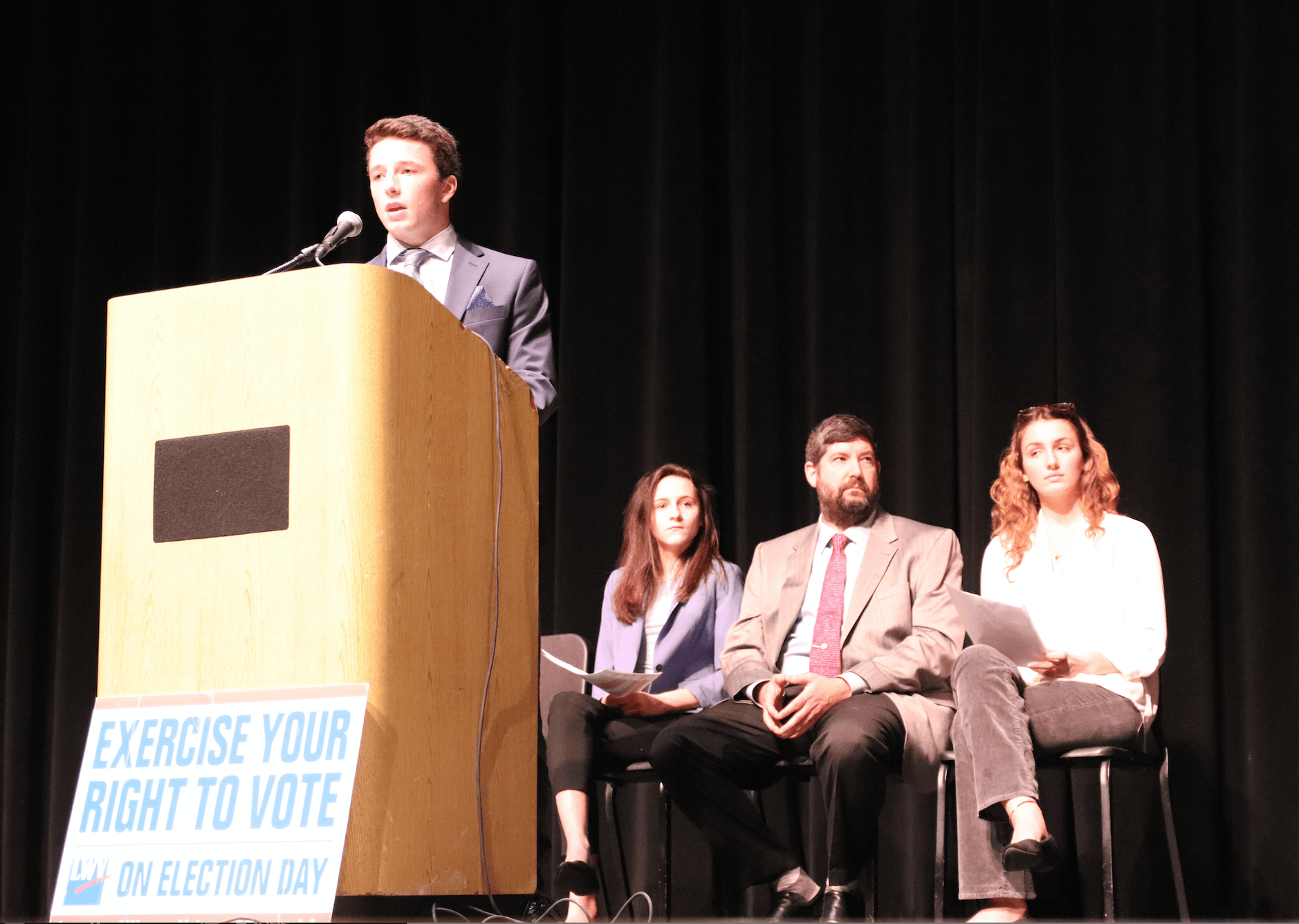 Dylan Maloney a member of We the People directs questions to the candidates. Nov 1, 2019 Photo: Leslie Yager

Dylan Maloney asked Mr. Camillo why residents should trust him to manage a town as economically prosperous as Greenwich?

“Greenwich has a $455 million budget. At the state level I worked on budgets in the tens of billions of dollars. In 2017 I dealt with the estate tax, getting it up to the federal exclusion level. Budgets are something I’m used to. I’ve started small businesses in the past. The town is something I know. I don’t need to do a listening tour of the town. I don’t come at people during election time; I come from them.”

“There are also areas where we can look at doing a little bit more with less because next year we’re going to have a revaluation. You’ll see less money coming into the town’s coffers and you’ll see a shift from back country areas to the middle and center of town. We’ll have to be a little more efficient,” he continued. 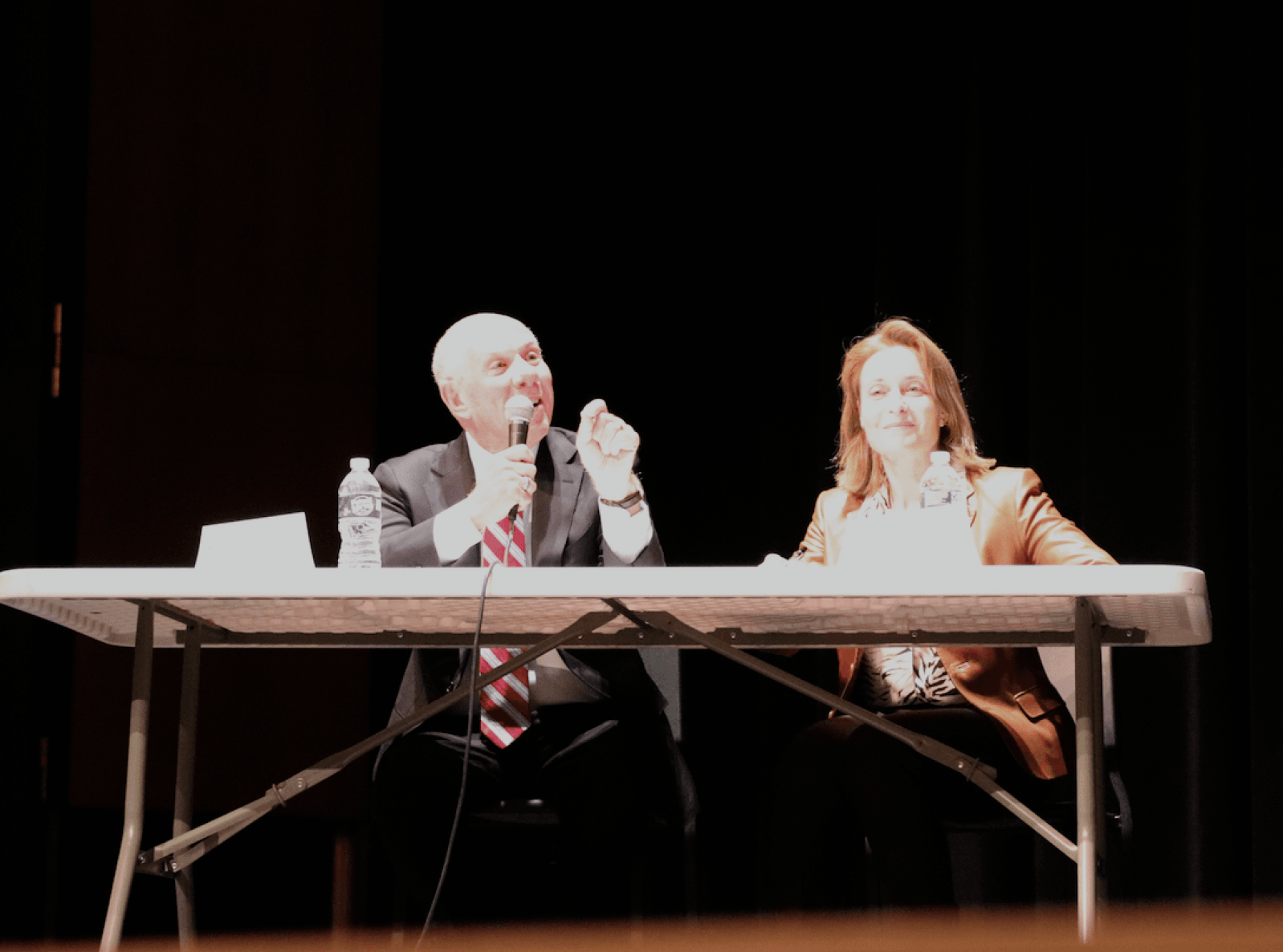 Dylan Maloney then asked Ms. Oberlander why residents should trust her considering her recent SEEC fine?
“Anyone here ever put their trust in a friend or an acquaintance and found out they didn’t tell you the truth?” Oberlander asked, referring to the SEEC’s conclusion that she and four other Democrats had in good faith attempted to comply with campaign laws, but committed an unintentional violation and were thus fined $1,000 each.

“That was the situation I was put in,” Oberlander added. “Yes, it was a mistake to trust a colleague. I have a longstanding career in law and municipal government over 20 years, working for the finest law firms. Transparency, accountability and ethics have been my hallmark. So imagine how upsetting it was to find someone has mislead you intentionally.  I have owned up to my mistake. But it has no bearing on my ability to run the town. It was a technical violation of failing to amend a filing based on someone’s misleading statements. And I do have a lot of experience with the town and the town’s budget, which makes me the most experienced leader in this election.” 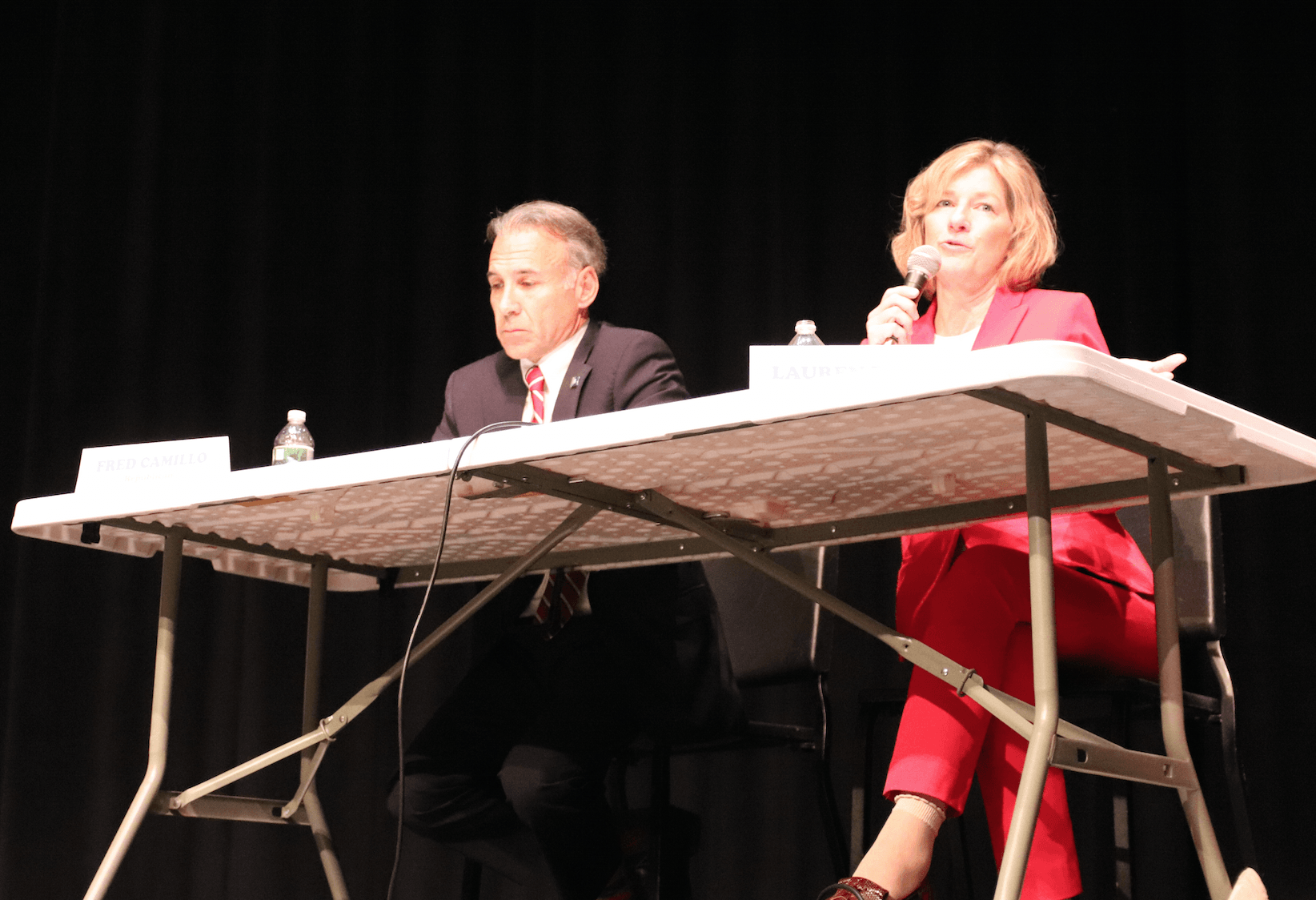 Greenwich Schools Playing Fields
Asked about playing field quality, Ms. Oberlander said under her leadership as chair of the Board of Estimate and Taxation (BET), money had been added to the budget to address field conditions.

“There have been complaints for years about the status of our fields. Nothing has been done about it,” she said. “That is unacceptable, intolerable for you who have to play on the fields. …Under the current leadership, the administration, nothing has been done about the fields at Western Middle School that are closed,” she said, referring to the fenced off fields where contamination was discovered in 2016.

“One of the first things we will work on when we’re elected is getting a plan in place to clean up those fields,” she said. 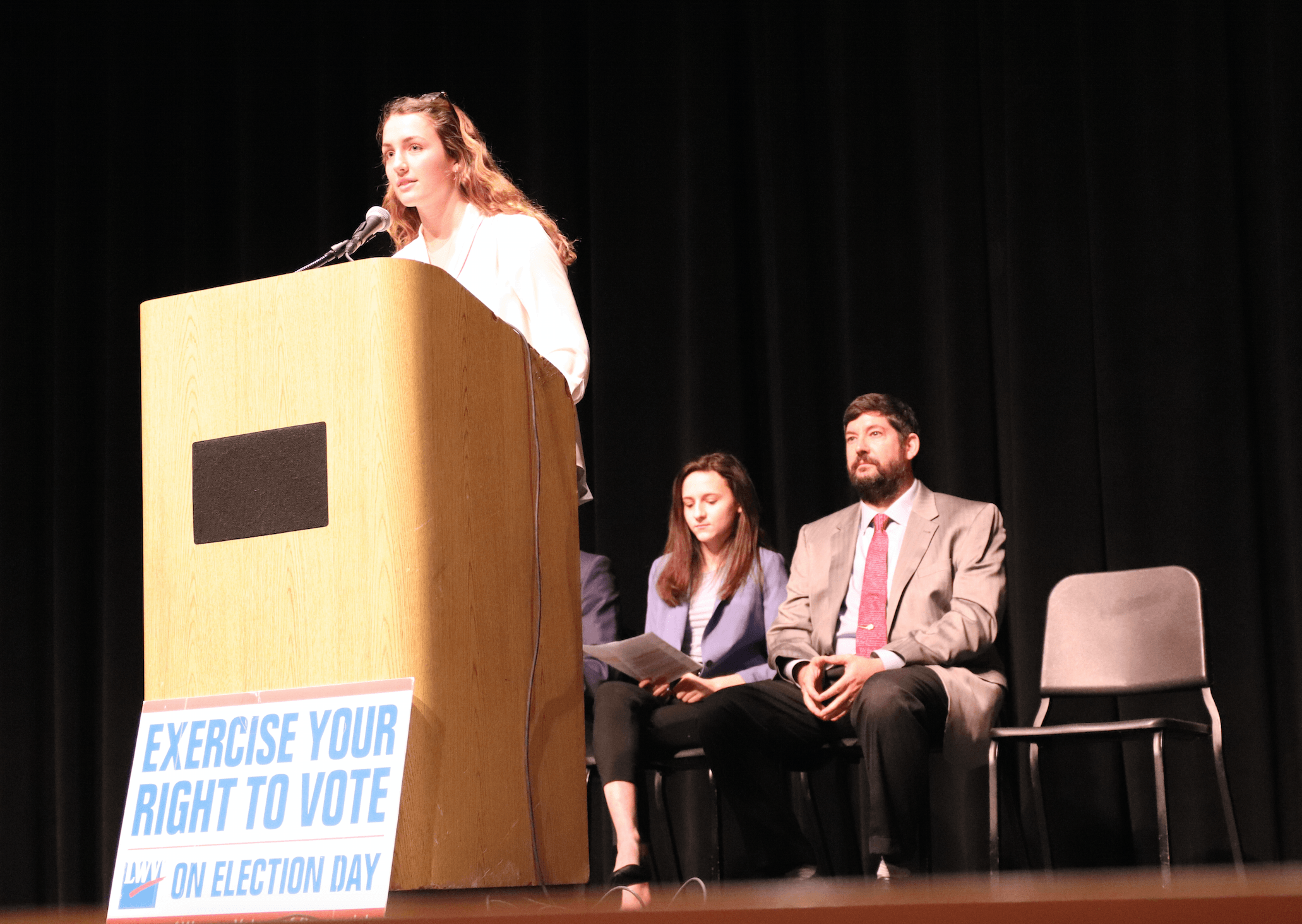 Dylan Mini a junior in Greenwich High School’s We the People asked a question during the Selectmen debates at GHS. Nov 1, 2019 Photo: Leslie Yager

Fred Camillo, who 20 years ago chaired the Parks & Recreation board, said he’d been a coach and an umpire for 35 years and is very familiar with the town’s fields.

Camillo said he’d work with groups including the Greenwich Athletic Foundation on public-private partnerships to renovate fields so the costs don’t fall back on the taxpayer.

“I’d also look to individuals who through philanthropic means would be willing to help us on it,” he said.

Cardinal Stadium Bleachers
We the People’s Dylan Maloney, a junior from We the People, brought up the GAF’s petition for Plan F, an “Under the Bleachers” design that would replace the bleachers, push them forward, make them ADA compliant, and put bathrooms under the bleachers. The bleachers were condemned last April, but put back in use through temporary scaffolding paid for by the GAF.

Ms Rabin, who has been on the Board of Education since 2015, said her board  will be voting on the bleachers designs at their Nov 21 meeting. “The entire BOE supports partnering with the GAF to improve things. You had an opportunity to use the stadium for sports and graduation in the spring.”

“Why do we have bleachers that are falling apart and have to be replaced? Why didn’t we replace them long ago?'” Litvack said. “The answer is planning. The issue to focus on is what are you going to be doing to avoid these things in the future? That’s what Jill and I will focus on.”

Vaping
Dylan Mini, also a GHS junior, said the vaping epidemic has resulted in 1,600 Americans being diagnosed with vaping related diseases. “Would you support a ban on all vaping devices?” she asked.

“Yes, I would,” Camillo said, adding that he attended a forum on vaping at the Boys and Girls Club on Monday night.

“It doesn’t matter if you are a standout athlete or somebody who never played sports before – this issue cuts across the board,” Camillo said. “I would continue as First Selectman to have forums and expose the issue. People are sometimes afraid of the stigma of having an addiction, but this is common and people need our help.”

Oberlander, the parent of three teenagers, also attended the vaping forum at the Boys & Girls Club. She said lately there is more awareness of the dangers of vaping, hazardous products used in vaping devices, and the resulting deaths and illnesses.

“Sometimes you just want to try something and don’t know if addiction will hit you. You also don’t know what’s included in the substance, and there are real harms,” Oberlander said. “As First Selectman I’d be working on a task force that will include public schools, independent schools and community groups around town to do more education and intervention, and to work with schools to put some policies in place – and mostly to educate.”

Teen Mental Health
Selectmen candidates were asked for their ideas to address adolescent mental health issues including depression and anxiety.

“It’s education and making sure there are people available to talk to and services,” Mr. Litvack said, adding that it is important to remove the stigma in order to help teens get help.

Ms. Rabin, who is currently the liaison from the BOE to student government executive committee, said she has two sons who went to GHS and went to GHS herself.

“I know what it’s like to have the stress of being a student at GHS,” she said. “I’ve learned about the stress you’re under and the issues you’re facing. We’ve put forward the Wellness Center at the high school. We partnered with Greenwich Alliance for Education to make that happen.”

“There are people who care about you,” she said. “If you’re struggling with anything, the most important thing to do is to find an adult you can talk to. If you can’t find an adult, come find me and I will talk to you and help you get the help you need.”

Minimum Wage
Wyatt Radzin said Governor Lamont signed a bill that would raise the state’s minimum wage to approximately $15.00 over four years, and asked the candidates to comment.

“I’m a supporter of raising the minimum wage and was glad to see Connecticut did so,” Ms. Oberlander said, adding, “The phase-in is just a dollar a year.

“Just imagine what it would be like to go out and buy a sandwich. When you go out to dinner with your family and see people working in restaurants and know they are making $10 or $11 an hour. It’s not a lot of money. Now imagine you have to support you family on that, and get to work and pay your rent. We need to have a living wage. As First Selectman I’m going to support the programs that support residents – whether it be children or elderly residents.

Oberlander said for families who are struggling, the town should offer breakfast in school.  “Kids should have breakfast so they can study and learn.”

Mr. Camillo said every year as State Rep he does a business tour of the 151st district to get feedback on legislation.

“Most of the small businesses are hurt by things like this,” Camillo said. “They don’t want to lay off people, or lower the hours they work, but that happens sometimes. We have to be careful when we push legislation down on small businesses. These are people who create the most jobs. …We have to make sure we don’t hurt the people we’re trying to help.”

“I think we need stronger laws nationally,”Mr. Litvack said. “Connecticut is a leader n this area. because we don’t have federal laws and one political party that is absolutely opposed to doing anything, we can’t  get the most basic background checks, assault weapons.  Why are these things allowed?”

“As long we we don’t have federal laws, we have people who migrate from another state into Connecticut with weapons they could not otherwise purchase here,” he added “Until we get a federal law, we’re always going to have a problem here. I stand foursquare with people who are opposed to assault weapons and are for favor of background checks. Honoring the second amendment doesn’t mean allowing these kinds of assault, military weapons in people’s hands.”

“We are bordering states that aren’t necessarily as strict as in Connecticut,” she said, adding. “But there other things we can be doing. There are people in their homes with guns that are not locked up, and 90% of children who die by guns are doing it accidentally in their homes.”

The GHS debate was the last of a series of debates among the selectmen that started with an environmental forum at Tod’s Point in September.

That was followed by an evening debate on Oct 10 at GHS, a forum at the Greenwich Water Club, and most recently included a standing room only debate at the Round Hill Association.

Selectmen Candidates Differentiate Themselves at Debate Hosted by LWV

EDITOR’S NOTE: The deadline for letters to the editor for candidates on Nov 5, 2019 election was Tuesday Oct 29 at 5pm. We are still publishing letters that were submitted in time for the deadline.