Tuesday night’s Planning & Zoning public hearing over the Greenwich Housing Authority’s (HATG) upgrades at Armstrong Court set off hours of rancorous debate and impassioned testimony from neighbors in the Booth Court area. Close to 1:00am, after roughly 200 attendees had dispersed — some to watch the remainder live on GCTV ch 79 — the commission decided to require HATG dig two additional test holes in the area of Booth Court in addition to those they will dig and have tested as a condition to upgrades on the other side of the 15 acre property.

Dawn Fortunato, of Booth Court, evoked the memory of Josephine Evaristo and revealed her own battle with cancer. “We didn’t ask for an incinerator. We didn’t ask for a dump,” she said of her Chickahominy neighborhood. 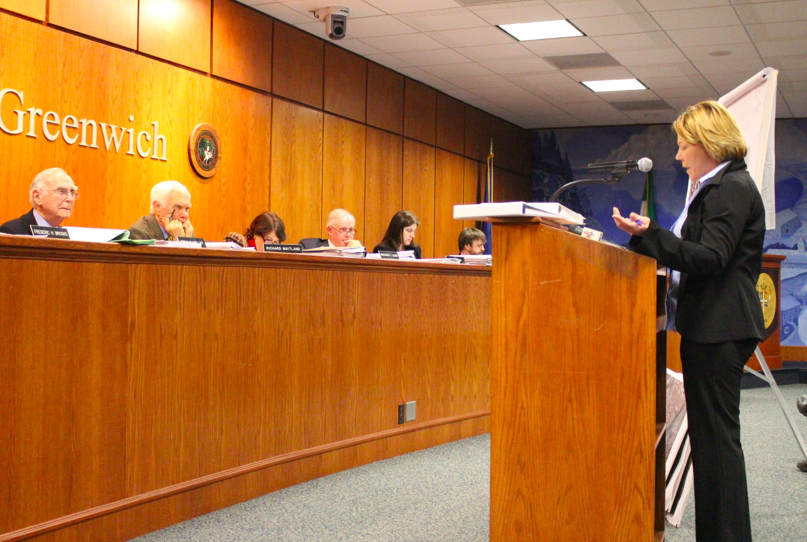 Ms. Fortunato said she was concerned that the testimony of Otto Lauersdorf, a Booth Court resident and former dump incinerator worker in the 1970s, was never mentioned in the March 6 letter from Amy Siebert, head of Dept. of Public Works, stating she was comfortable with the soil test conducted by Melick-Tully and that no further testing was merited.

“There is no requirement to test further in the Booth Court/Place portion of the site, and nothing has been found that requires remediation at this time,” Siebert said in her letter to Planning and Zoning director Katie DeLuca.

Fortunato described being overjoyed to learn she was pregnant at the age of 36 and a few days later learning she had cervical cancer. “On Columbus day 2013 my maternal organs were stripped of me,” she said, adding that after treatment, she is in remission.

“In my heart I don’t believe it’s clean,” she said. “This is not an athletic field for a few hours a week. This is a residential neighborhood,” she said.  Fortunato defended herself against Mr. Romeo’s claim on his radio show that she wanted to block the improvements at Armstrong Court. “That is the last thing I want. I lived in public housing… We all deserve quality of life,” she said.

No residents from Armstrong Court testified at the hearing.

Christine Edwards said that rather than treat the situation as a potential conspiracy, Greenwich should bring in independent testers. “It could be an Erin Brokovich situation or a Love Canal,” Edwards said. “We need to be completely transparent. If this means re-doing test holes and bores and making sure they’re 12 ft deep, we should do that. If it means dredging these ponds and seeing what’s down there, we should do that.”

Sylvester Pecora, chair of the Chickahominy Neighborhood Association said he was upset that people outside Chickahominy pass judgement on his neighborhood. “Especially when they say sickness is only on Booth Place. I know of a lot of cases on Lyon Ave, with cancer,” he said.

Pecora said that while he endorses the need for upgrades to Armstrong Court, the Town should have dredged the pond by the transfer station years ago. “It’s not Amy’s fault. It’s because you don’t give them the money. …That creates, from what I understand, the contaminants. If it’s full it’s got to be spilling all over. You got the whole community upset for what you didn’t do, not what you did do.”

“Damn it, this should be done. You’re holding up money for the transfer station, yet you built fire house, new schools…” Pecora said. 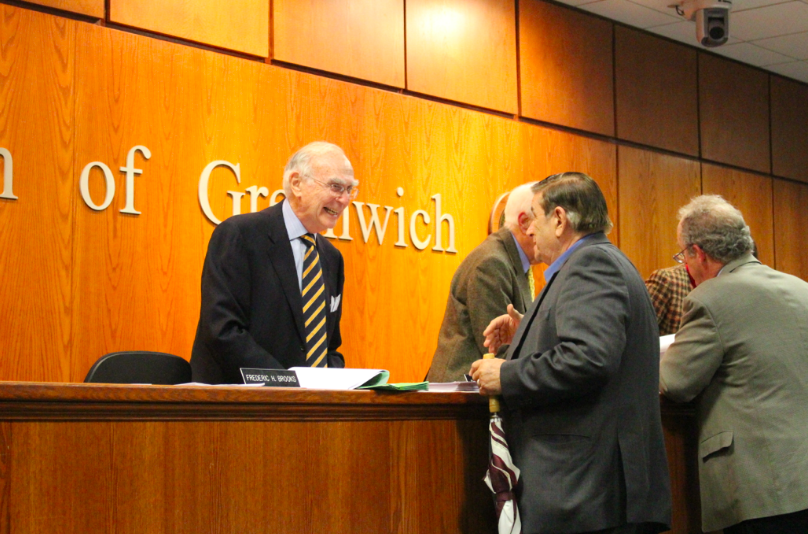 A curious moment came when Mr. Macri held up a copy of the chain-of-custody form that had been missing from the HATG website for months and the subject of an Freedom of Information request from Ms. Fortunato that had escalated to FOI Commission in Hartford. “If they had this, why wouldn’t they want to give it up,” Ms. Fortunato demanded, adding that contributed to her lack of trust.

Otto Lauersdorf described working at the incinerator from 1971 to 1977. He was asked to go through maps and do his best to recollect where he had dumped waste he said came from factories including the former felt mill in Glenville and Electrolux. 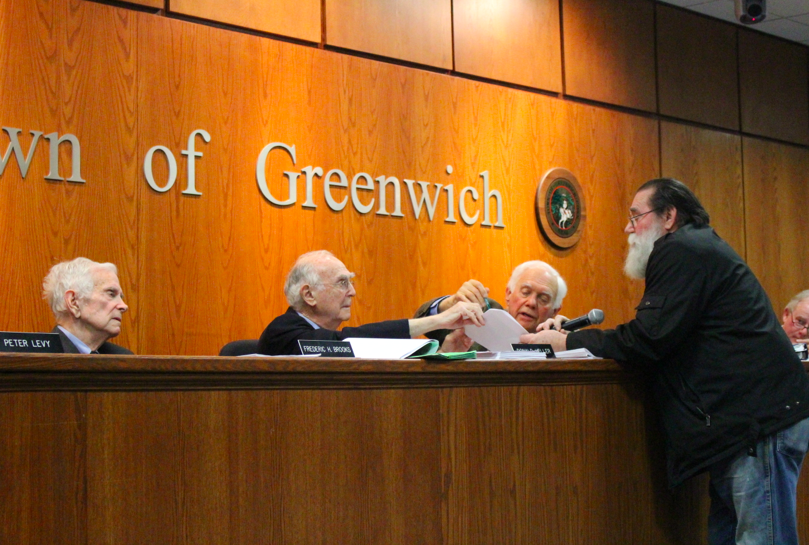 Former incinerator operator Otto Lauersdorf attempted to point out locations where he dumped waste from factories in the 1970s.

Mr. Lauersdorf also insisted there had been a pond on Armstrong Court and that he had chased his kids out of there for years. Though he did not recall dumping specifically on Armstrong Court property 45 years ago, he referenced poisons “leaching into the brook” and water flowing downhill, not up.” He took Mr. Romeo to task for mocking Ms. Fortunato for her contention that contaminated soil made its way to her property. He described dust blowing in a southwesterly direction from the dump. “What happens after weeks of sunny weather? It turns to dust,” he said of how dirt in the dump may have gotten to Booth Court.

Christopher von Keyserling of Representative Town Meeting, District 8, said he was really upset and personally offended at neighbors’ characterization of the Melick-Tully report as “flim-flam” and the characterization that everyone in municipal government is incompetent and conspiring against neighbors. “I don’t find the Housing Authority as a flim-flam organization,” he said.

“In any town you’re going to have troubles because before 1970. They even threw automobiles into ponds. They did all kinds of things people considered normal. We could go out and test everywhere in Greenwich right now and make sure everything is safe. I don’t think that’s an intelligent way to approach it,” von Keyserling said.

Mike Warner of RTM District 3 described the proposed HATG improvements as transformative. “I would hope that after doing the proper science, you could find a way to make this happen.”

After all was said and done, the P&Z commission was still struggling around 1:00am with with the idea of requiring the applicant, HATG, to re-test soil in the corner of Armstrong Court near Booth Court.

“I think there’s unrest in the community. They believe the site is contaminated. I’m convinced what we’ve received is adequate, but I want to give them some reassurance,” Mr. Maitland said. After discussion the commission agreed on a request for two test pits be required in that area near Booth Court. “I suggest we use somebody other than Melick-Tully,” Mr. Maitland said. “Just to have a double-check.”

When Mrs. Deluca, the P&Z director, reminded the commissioners of the need to justify requiring additional test pits that aren’t in the area of disturbance.

“To give comfort to the public,” Mr. Heller said.

“The purpose is there were a number of people who testified that the investigations we did were either incomplete or not correct,” Mr. Maitland said. “When I asked him where he dumped on the site, he pointed to an area with the incinerator used as a reference point, but his finger never crossed into the Armstrong Court site, Mr. Maitland said, referring to Mr. Lauersdorf. “We’re trusting somebody’s memory. This yellow line that’s clear as a bell now was just open land back then. We have his testimony that there was dumping. But he can’t tell us exactly where it was.”

“We heard testimony from people who participated and professionals in the field,” Mrs. Alban said. “The commissioner of public works never addressed the things that Mr. Lauersdorf was saying, and skirted the question of whether there had been these pits.”

“She has a point,” Mr. Heller said. “We’re entitled to a double-check because of the level of discomfort.”

“We represent the town and there’s a lot of people in this town who think that this job has not been thorough enough. If we can bolster that, and then make our decision,” Mr. Brooks said, reminding everyone the project is still at the preliminary stage.

The vote included a whereas clause stating that because the site is not changing zoning to R-MF (multi-family), the project  will be an effective build-out of the site, and only an additional 5 units remain possible in the future.