During a proposal on Tuesday night to convert office space into 69 rental apartments with terraces at The Mill complex along the Byram River in Glenville, a member of one of the four families that own the property, Steven Schacter, addressed the P&Z commission.

Schacter described the project as an adaptive reuse. He said The Mill complex is comprised of five buildings: the 1881 building, the railroad building, the mansion, the central mill building and the 1981 building.

Of those, three will have office space converted into apartments and, a lower parking level under Centro there would become eight apartments with terraces facing the river.

Schacter said the conversion to apartments would be the second iteration of the historic mill. (The American Felt Company closed in the late 1970’s.)

Since 2008, the office vacancy rate in western Greenwich has been between 20% and 30%, a change Schacter described as structural, not cyclical.

Schacter said that starting in 2008, many financial services companies in Greenwich downsized, went out of business, or relocated to newer office stock in the south end of Stamford. 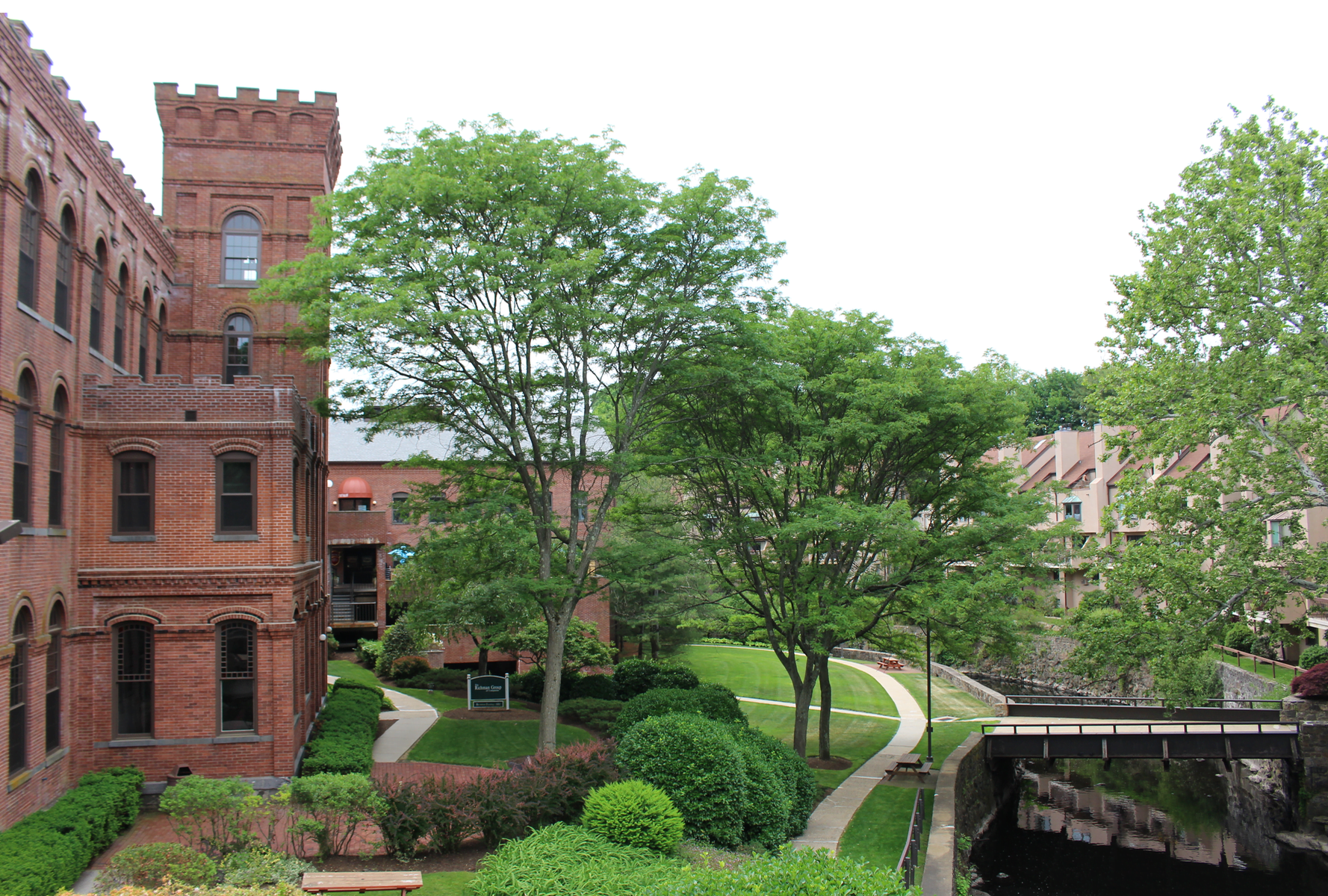 “Our office stock became somewhat antiquated,” he said citing ceiling heights, exposures, and bigger windows available in Stamford. He said there has been a recovery in Greenwich, but not so much on the western side.

“I don’t see it coming to rent levels to justify the expense of putting in a new tenant,” he continued, explaining that typical lease terms have gone from 10 years to 7 year to 5 years.

“The economics of the lease are that you’re rebuilding the space every three to ten years,” he said.

He said baby boomers are aging and millennials are reluctant to own, prefering instead to rent, making the building into rental apartments was the most attractive use of the old office space.

“And it’s happening everywhere,” he said. “We hope we’re not too late to the party.”

Further, he said recent changes in taxation altered the equilibrium between renting and owning. Specifically he cited the lack of deductibility of property taxes and high mortgages as making renting more attractive.

The original site was 30 acres. Today the nucleus of The Mill complex is 8.7 acres containing the five buildings, of which 3 are proposed to be repurposed. 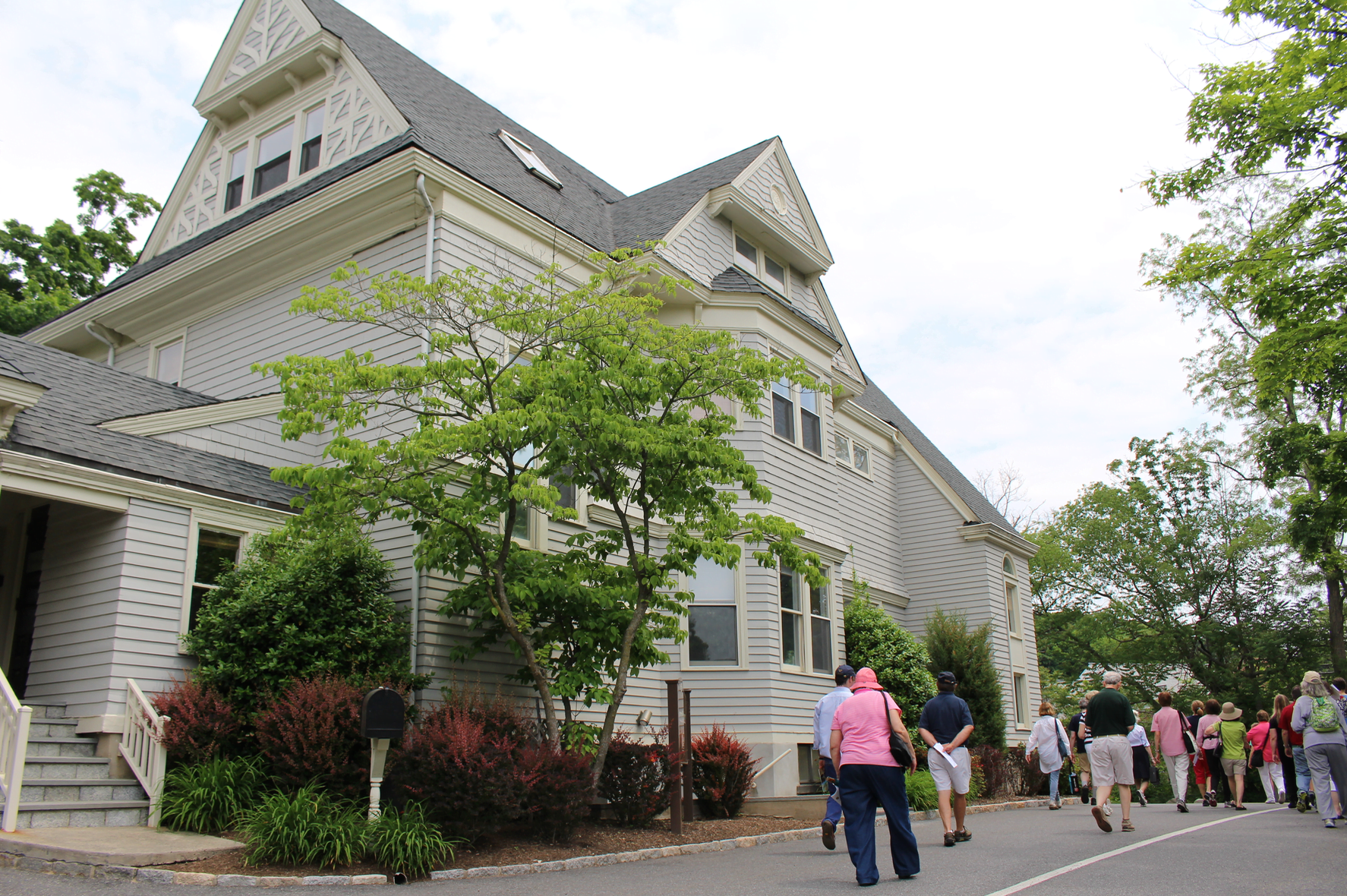 1. The historic mansion will remain an office building.

2. The railroad or “depot” building, which was built for a train spur that never materialized, features ground floor retail and second floor office. The building was built in the 1800s and has 6,331 square feet. This will not change.

1: The 1881 building, opposite the railroad building is a 19th century 25,429 sq ft structure most closely identified with the mill. The applicant proposed to convert in entirely to  25 apartments, ranging 450 sq ft to 1,300 sq ft.

In this building, under Centro, they propose to convert the lowest level of the parking garage into 8 apartments ranging from 900 sq ft to 2200 sq ft.

And, where the 1881 building meets the central mill building, they propose to install an elevator to transport residents, visitors and customers from street level to three stops below.

3. “The 1981 building” at 10 Glenville Street on the west side of the river, is a 62,742 sq ft structure proposed to have 36 apartments ranging between 950 sq ft and 1,950 sq ft. The applicant wants to keep as office space the first floor on which the applicants have their offices, and continue to lease the portion of the floor they do not occupy.

And Schacter said that FAR, building coverage, and lot coverage all remain substantially below permitted percentages. 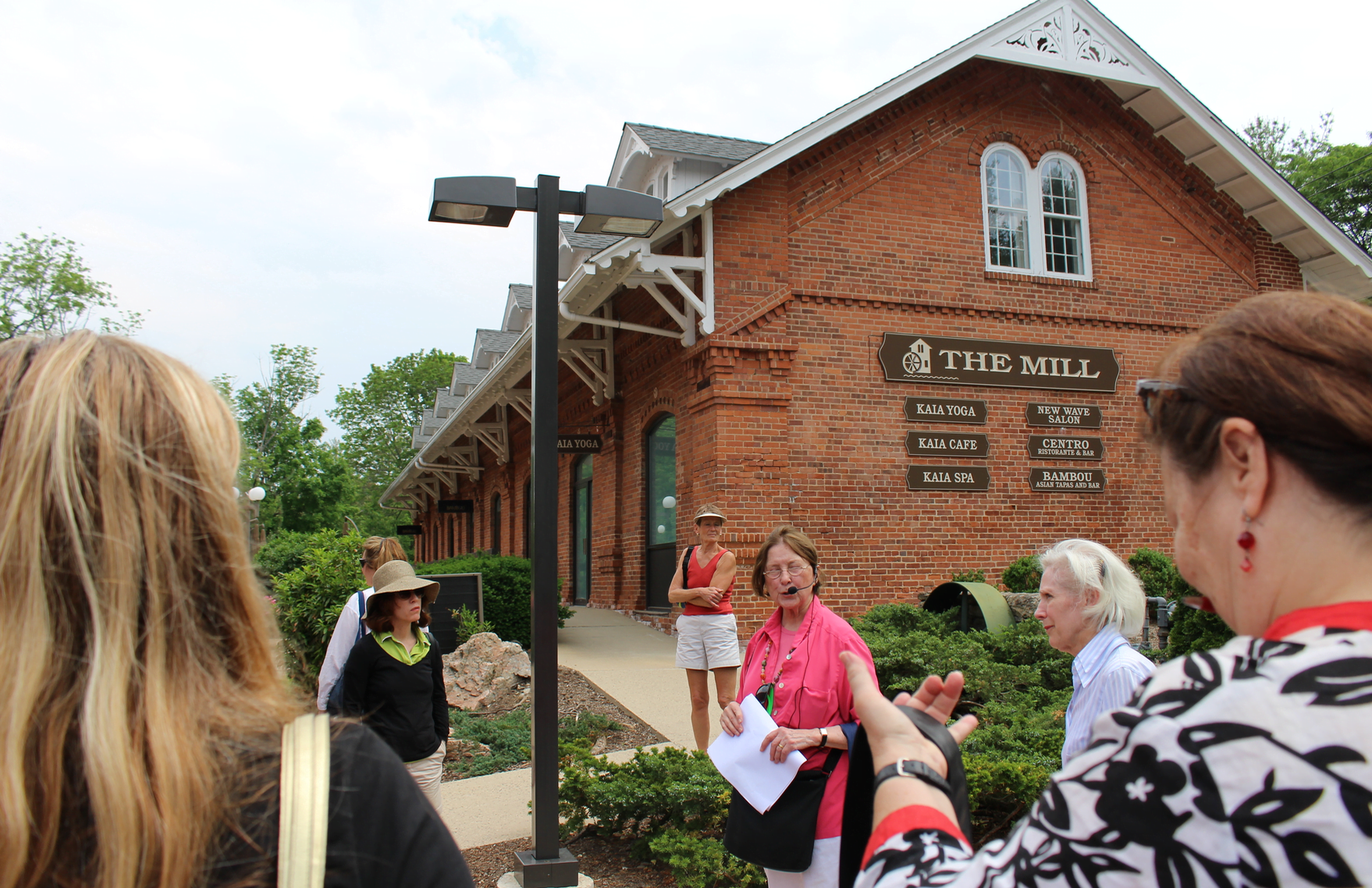 The applicant suggested that changing the office buildings to residential will reduce traffic, though neighbors, mostly from adjacent River Run condos disagreed.

Schacter said the application went through Wetlands and the Historic District  and that he expected smooth sailing with FEMA. Also, the Architectural Review Committee liked the application as it retains its “park like feeling “with improvement that will replace overgrown 40-year-old plantings.

Trees. The applicant said 17 trees are set to be removed. He said 3 are dead. Some are White Pine trees he described as out of scale, and two Oak trees. They said they plan to plant trees and shrubs that are pollinator friendly.

Parking: The site has 185 parking spaces plus 7 ADA compliant spaces on East side of river (RR and central mill)  and 196 plus 3 ADA on the west side of river.

“We hope you will agree that our plan as proposed will result in an iconic Greenwich property being updated, improved and revitalized with vibrancy and dynamism to the benefit of the entire neighborhood,” Schacter said.

There were many questions from the commission about traffic patterns given the proposed change of use. “You have uses that go into the night hours and weekends and others that are daytime only. How are you going to integrate them? asked Ms. Alban. “The parking around Centro gets very crowded.”

“We have excess spaces over and above the spaces needed for Centro,” said attorney John Tesei, explaining there will be almost 2 parking spaces per unit plus an additional 49 spaces for offices that will remain, clearing out in the evening.

He said there are also 23 spaces across the street at Hawthorne condominiums used through an easement by the Mill’s retail employees.

“They haven’t found anybody. It’s the nature of the site,” he said. “It’s been a tough retail site.”

Schacter said he believed that bringing 69 new residents, with one, two or three people per unit will be helpful to retail in The Mill and in the neighborhood, from Glenville Pizza to Stop & Shop.

Back to the parking question, Mr. Macri said the shared parking situation will be compromised.

“With all the apartments, all the people will be home and people coming to the restaurant at the same time,” he said.

Tesei said currently the site is required to have 501 parking spaces but only has 381, which makes it technically non conforming. “We’ll bring the parking into conformity,” he said.

Park-like but not a Public Park
Tesei said historically the owners have allowed the public to walk through the property where there is a beautiful dam and waterfall, but that is not pursuant to a easement.

“The concept now of a permanent public easement is not one they are willing to entertain,” he said, adding that there is no intention of curtailing the ability of neighborhood residents from coming on the property.

But, he said, “This is private property and we’re bringing in 69 new residents. We share a driveway with River Run. You have a situation where we have to be careful and balanced when it comes to third parties on the property.” 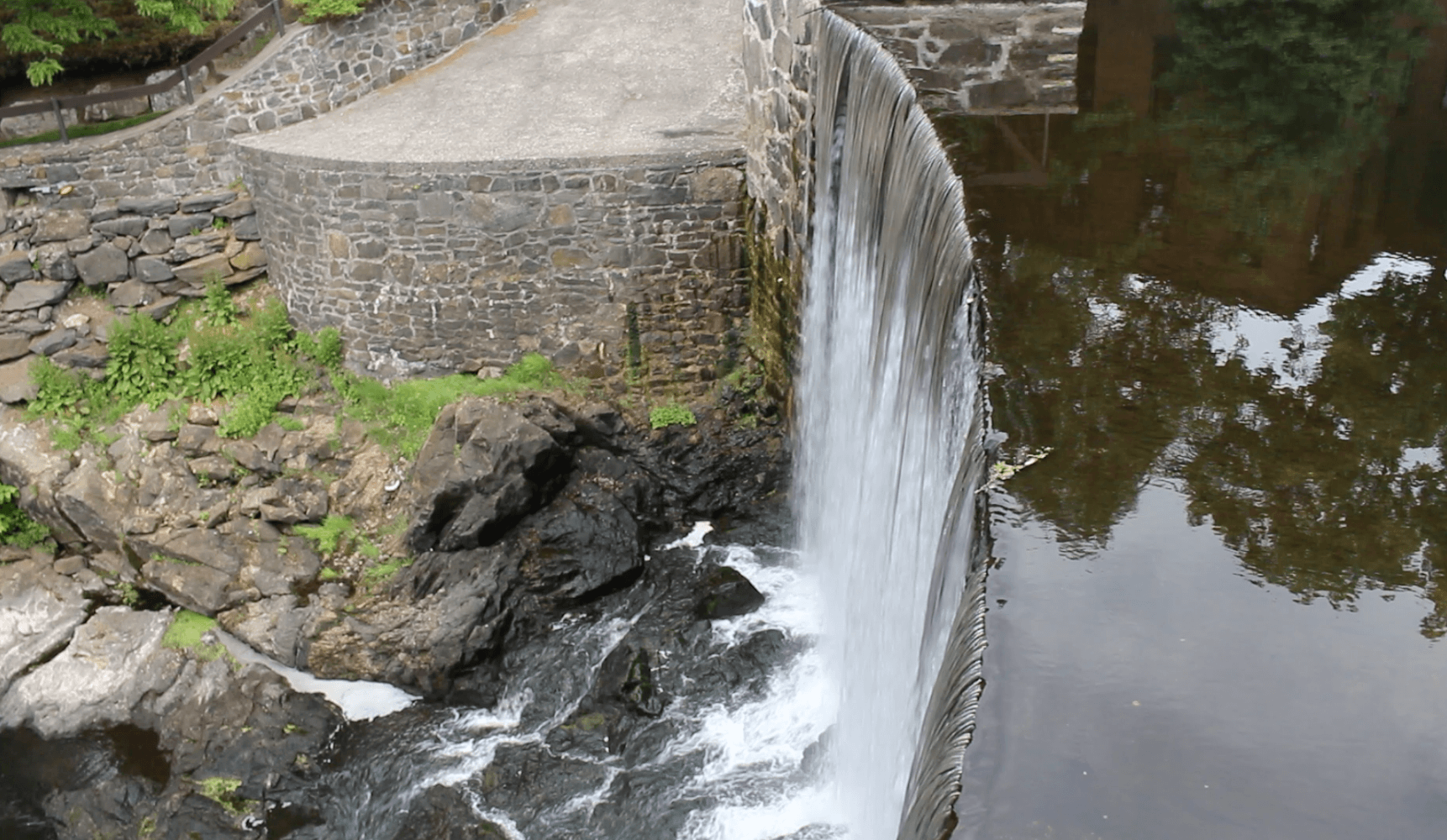 A neighbor at River Run, Lynn Carmichael said she was concerned about traffic and noted traffic backs up Weaver Street from Glenville Road from about 7:45am to 8:45 or 9:00am, and again in the afternoon because people are traveling from New York to Connecticut and vice versa.

She urged the commissioners to recommend striping an X the intersection like the one outside Whole Foods on East Putnam Ave.

“Everyone is driving during the same time frames. It’s always chock-a-block. It’s a nightmare,” she said.

P&Z director Katie DeLuca said the Town, noting the sheer volume of traffic,  got a grant to do a study of the intersection of Pemberwick Rd and Glenville Rd. “There is a study that will be underway,” she said. 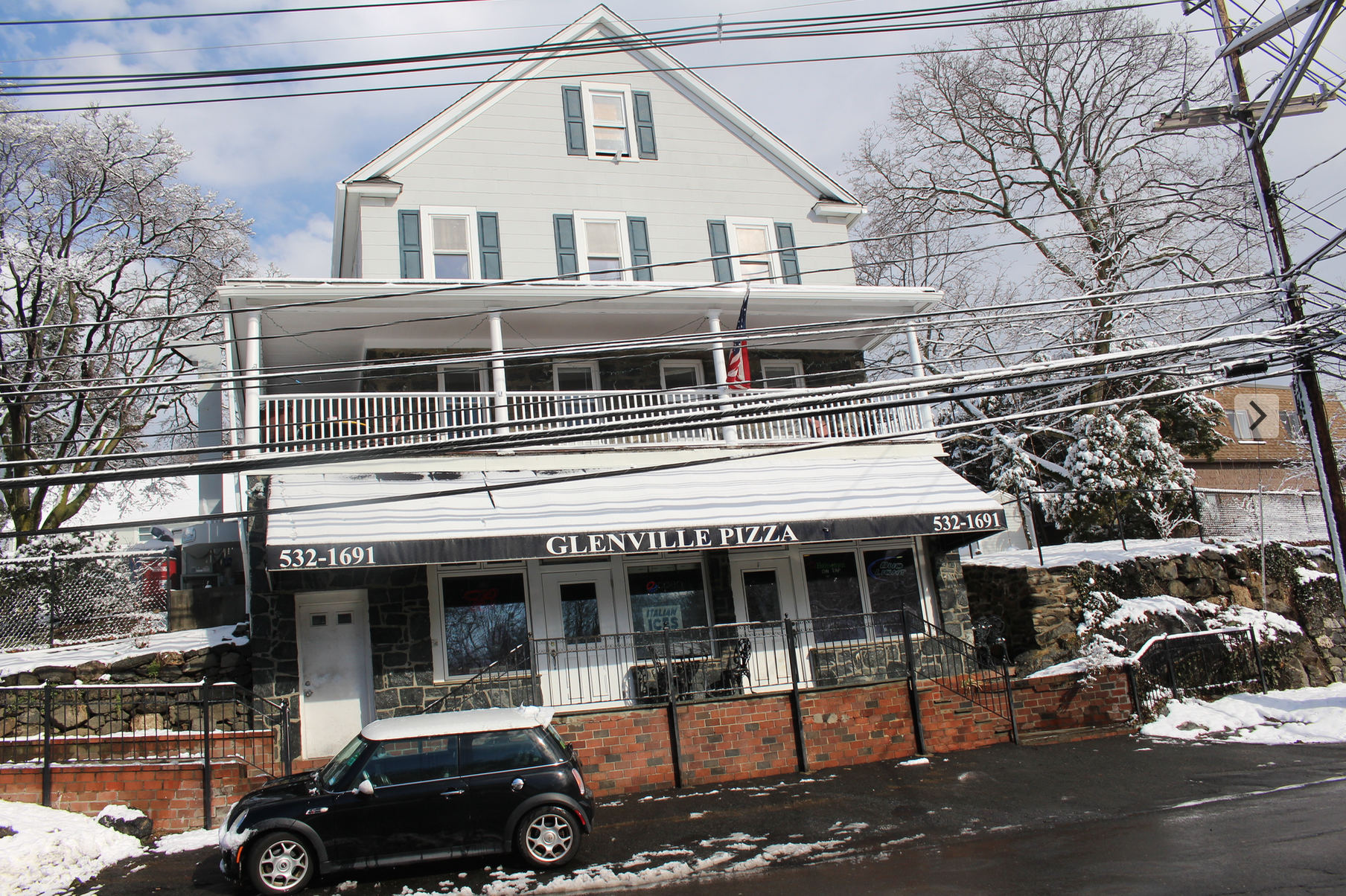 Residents said coming from Pemberwick Rd to Glenville Rd, (across from Glenville Pizza ) it is impossible to turn left, and they noted that the parking situation at the pizza parlor is treacherous.

“Glenville is choking on traffic,” said Steven Schultz, a 20 year resident of River Run. “We liked it when there were office workers there because they are there when we’re not home, and vice versa.”

River Run resident Janice Parker said the applicant’s rendering was inaccurate and that much of the green space is actually a road that that goes through to River Run.

“There’s an enormous amount of density that does not add value to the Town of Greenwich,” she said. “This will increase pressure on the neighborhood, traffic and schools. I don’t see where they will locate things like the dumpsters.”

Ms. Parker said the elephant in the room was the waterfall with its 40 ft drop. “There is no fencing, no protection. If you increase the number of people there – renters with young children – it’s an incredibly dangerous site.”

The application was left open and the applicant will return before the commission at a future meeting.

Acting P&Z Chair is Alban. Who Will Be the Next P&Z Chair Given RTM Vote against Maitland