The Inland Wetlands and Watercourses Agency heard an application from 777 West Putnam Ave LLC, who want to construct a new 120 unit apartment building on an 8.5 acre commercial site in Greenwich, a stone’s throw from the New York state line. 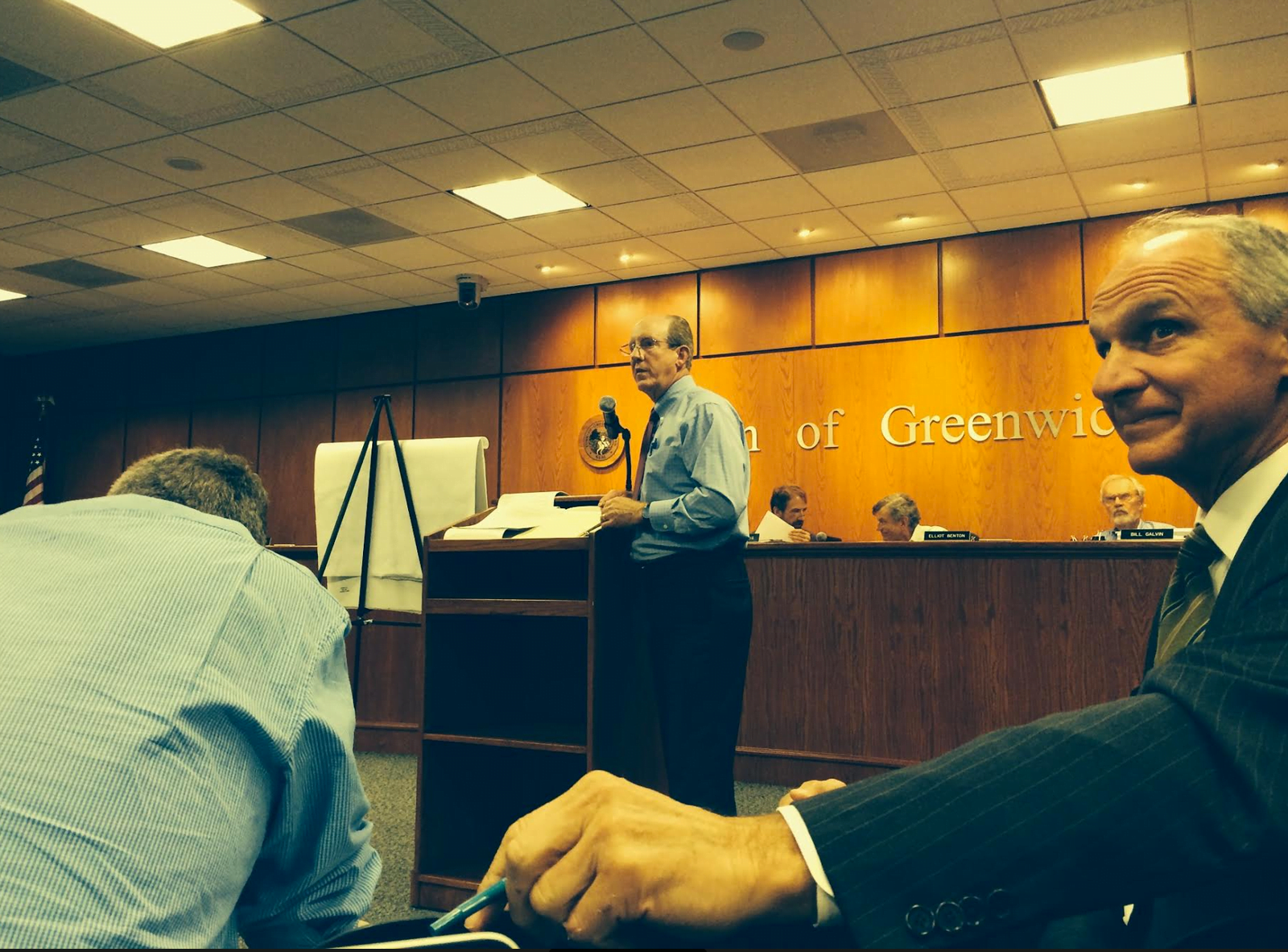 Currently there are 485 parking spaces on the property, but the applicant said it was “over parked” and the proposed number of parking spaces would be roughly 50 fewer than that.

The applicant was represented by attorney, John Tesei of Gilbride, Tusa, Last & Spellane LLC, and environmental consultant Jay Fain. Present at the meeting was Eric Schwartz, the representative of the developer and Rich Granoff, the architect.

The southern third of the site is occupied by an office building and the balance is massive parking lot, which the owner leases to a number of car dealerships. 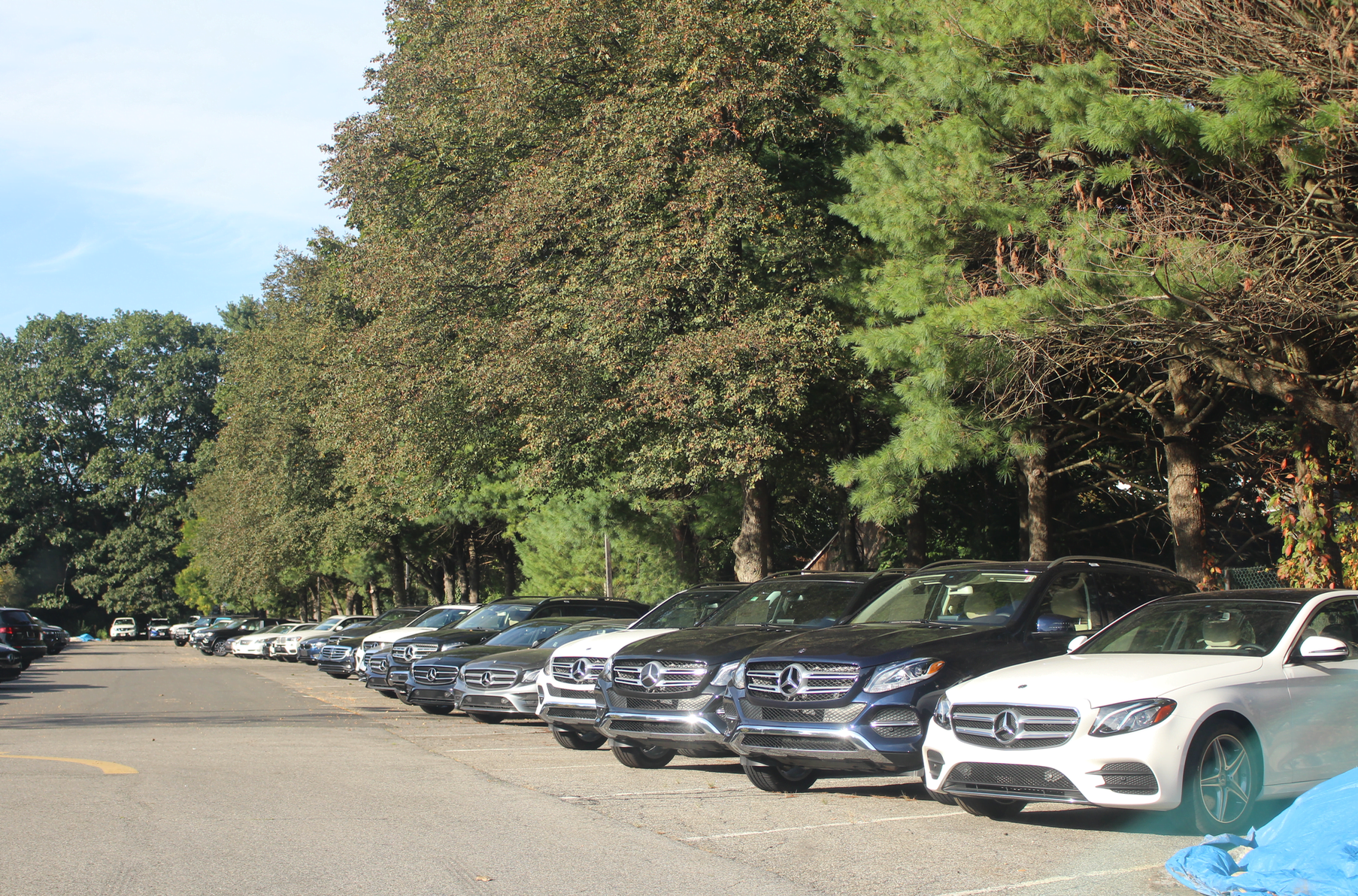 The parking lot behind the office building at 777 West Putnam Ave is leased to multiple car dealers. Photo: Leslie Yager 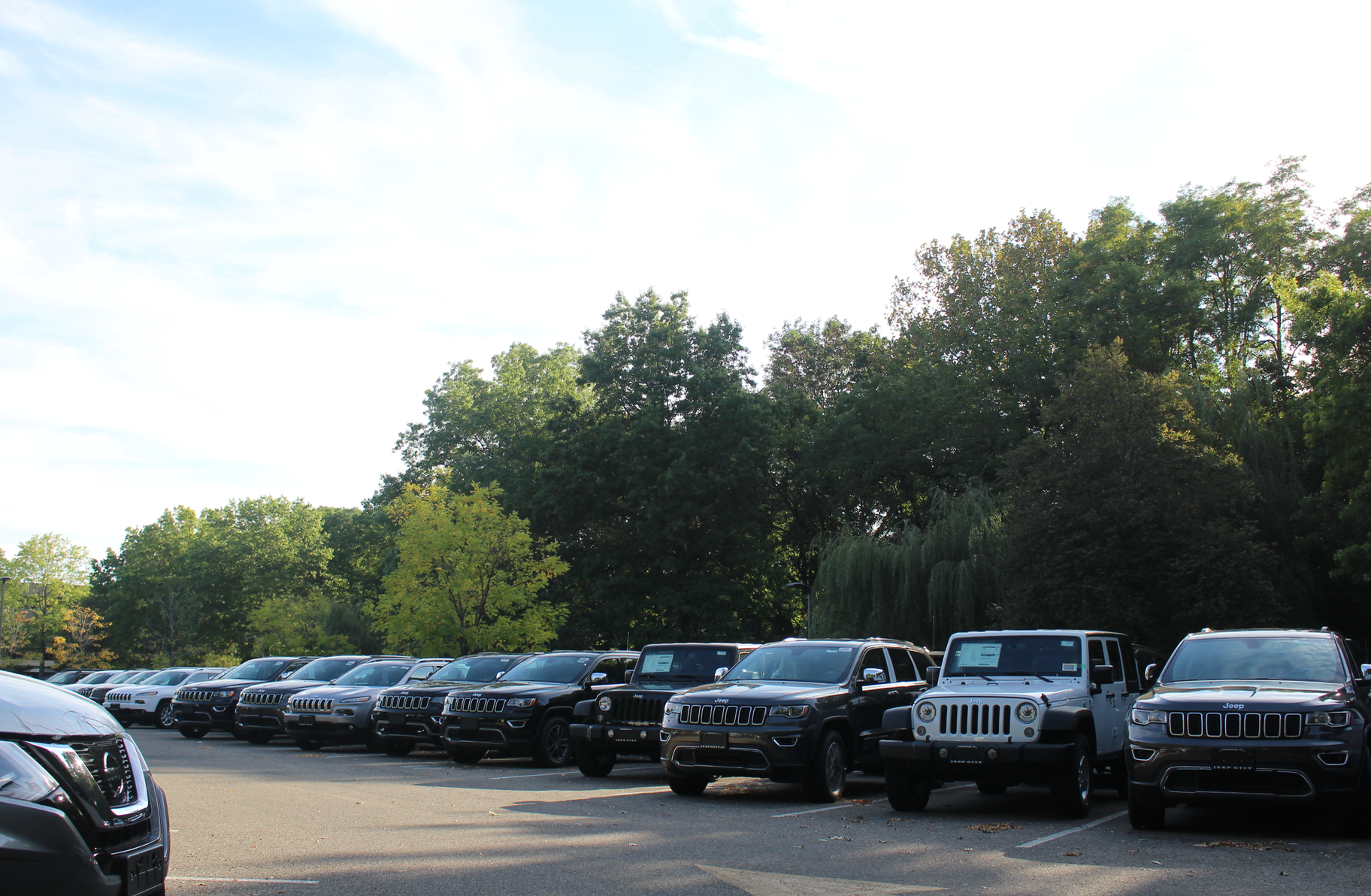 The parking lot behind the office building at 777 West Putnam Ave is leased to multiple car dealers. Photo: Leslie Yager

The distance between the Byram River, which is the jurisdictional resource for the Agency, and the parking lot is 45 feet.

The first floor of the proposed building would be elevated over the parking lot in order to get structure out of the 100 year flood zone.

The proposed apartment building would be built over the northern part of the parking lot, and the edge of the building would not extend further than the existing pavement.

The proposal includes a 6,000 sq ft increase in impervious coverage, and would develop about 66% of the overall FAR for the property.

Senior Wetland Analyst Bob Clausi of the IWWA said there had been a lot of neighbor interest in the proposal and that the Agency had received 8 letters, plus 26 comments, though not all the comments were in jurisdiction of the Agency. 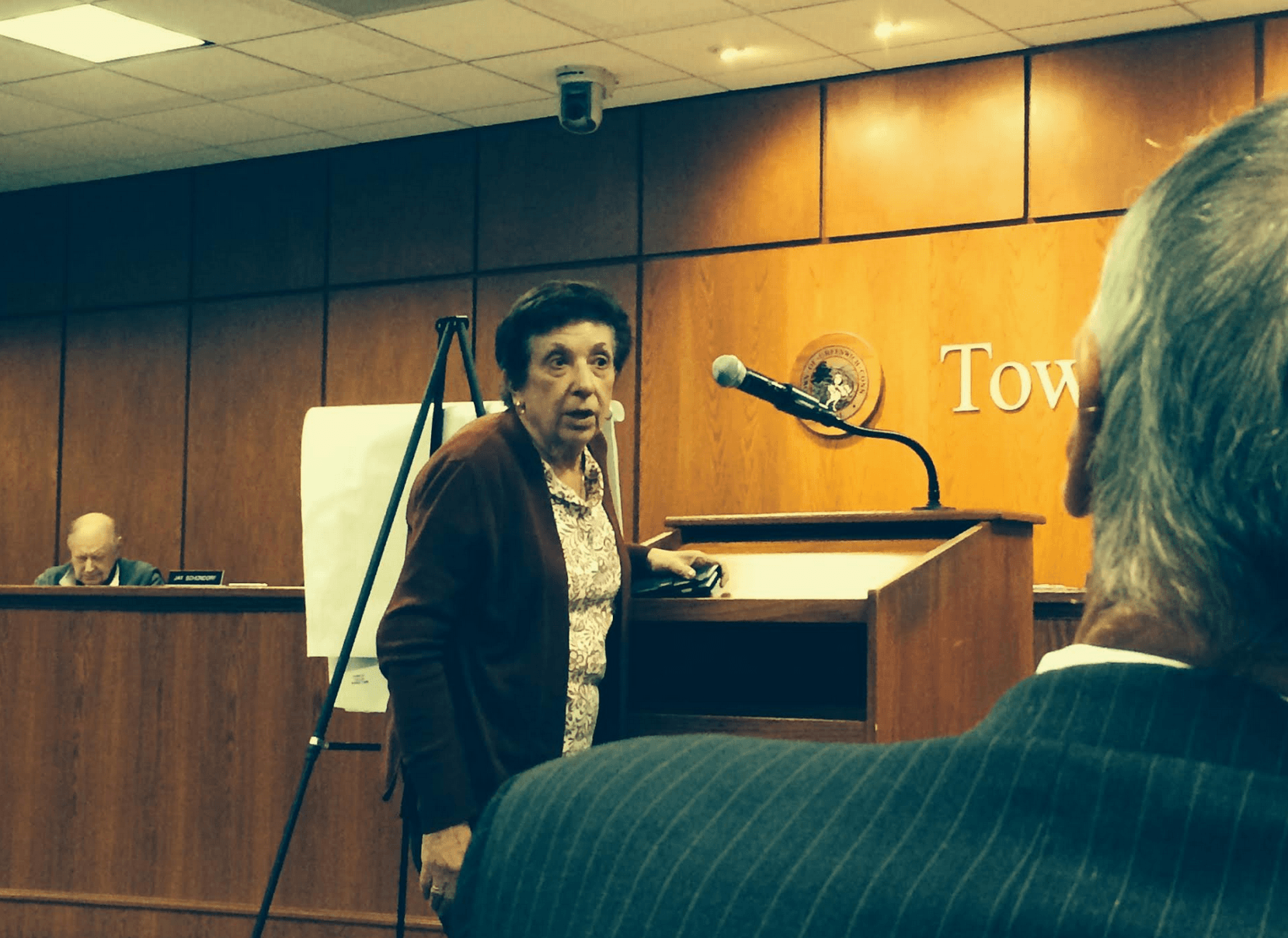 At the Inland Wetlands and Watercourses Agency meeting on Sept 25, Judy Moretti voiced concerns about a proposed development at 777 West Putnam Ave.

“I appreciate the work of the four muskeeters here,” said longtime Glenville resident Judy Moretti, pointing to the applicants. “But this is not a friendly neighborhood project. But there’s too many constraints and different issues here. See you at Planning & Zoning.”

Andrea Blume, the president of the Pemberwick Glenville Association, and resident of Upland Street, said, “Many neighbors have lived in this community for years and are very familiar with the issues of flooding and have followed the Army Corps of Engineers, and are very concerned.”

“We’ve all been evacuated from our homes,” Blume said. “I know 777 quite well and know it has flooded, and know people who have lost their cars.” 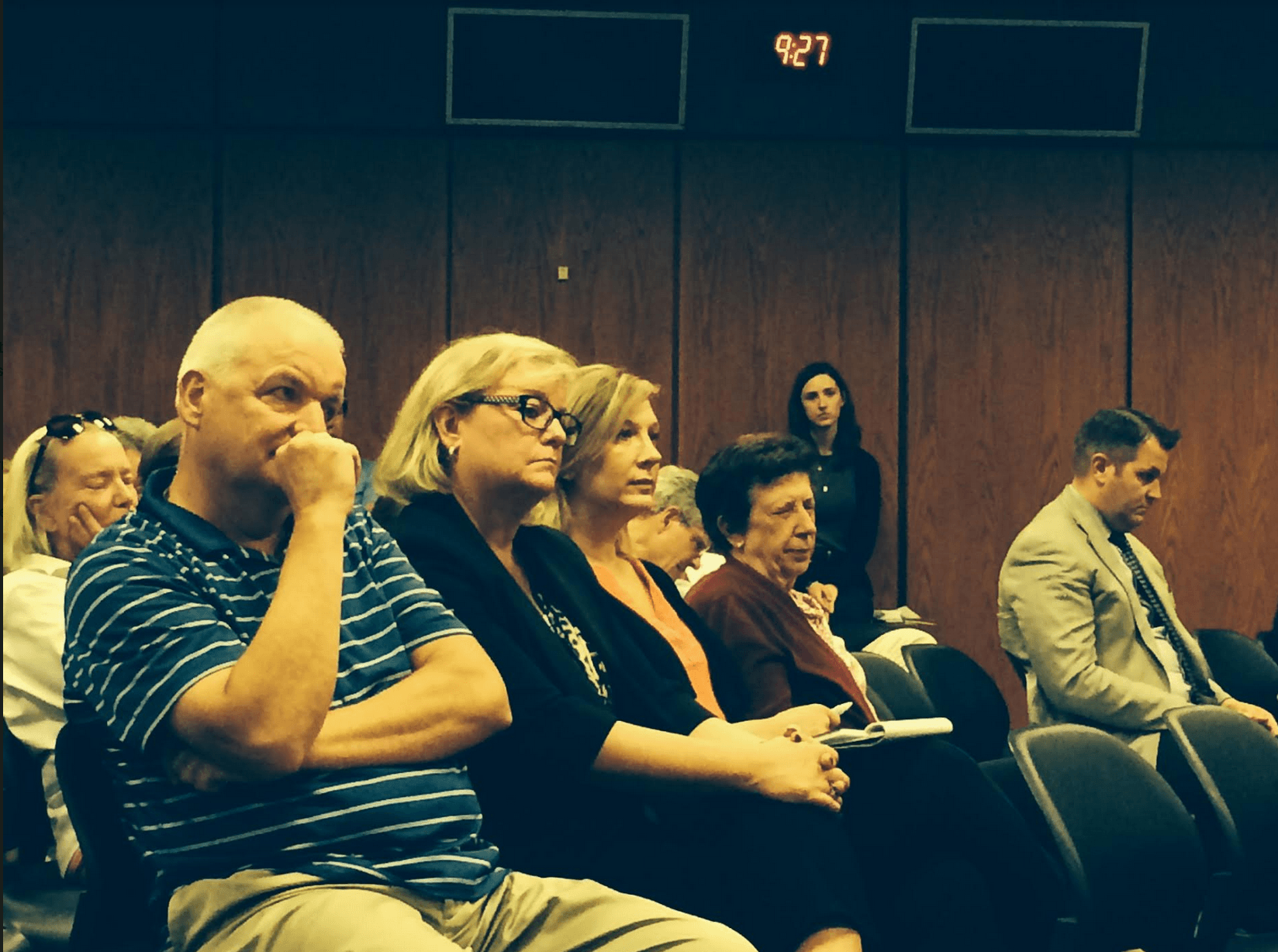 Lisa Stewart of Homestead Lane, said she had seen the area flood and had been evacuated from her home.

“It came right through the parking lot,” she said. “The garbage cans went this and that way. It is a big flood area in heavy rain.”

“You need to understand the states have purview over most of this application because it is tidal,” said Peter Alexander, a landscape architect who is also a Pemberwick resident. “Since this watershed is shared by Connecticut and New York, and is labeled part of reservoir system, regulations now require a 50% increase in modeling for the 100 year storm.”

Alexander said the flood situation needs to be looked at more carefully and there are potentially dramatic effects on the upstream areas.

“Even with this up on stilts,” he said. “Floating debris including trees, is a major player in storms like recent ones. The Sandy effect we experienced was minimal.”

Mr. Alexander went on to say that as far as the septic and sewer systems, “You know the direct abutter is one of the pump stations. The effect on the neighborhood from an emergency point of view is a factor and will effect property values.” 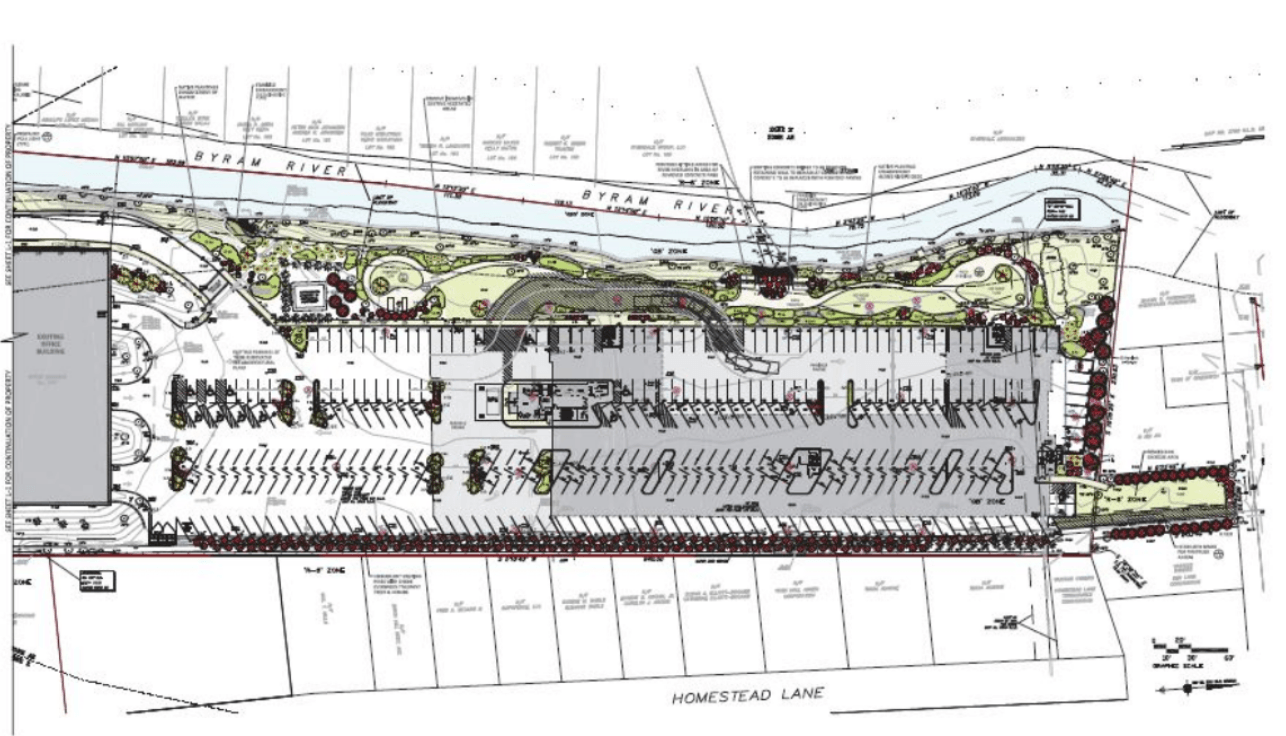 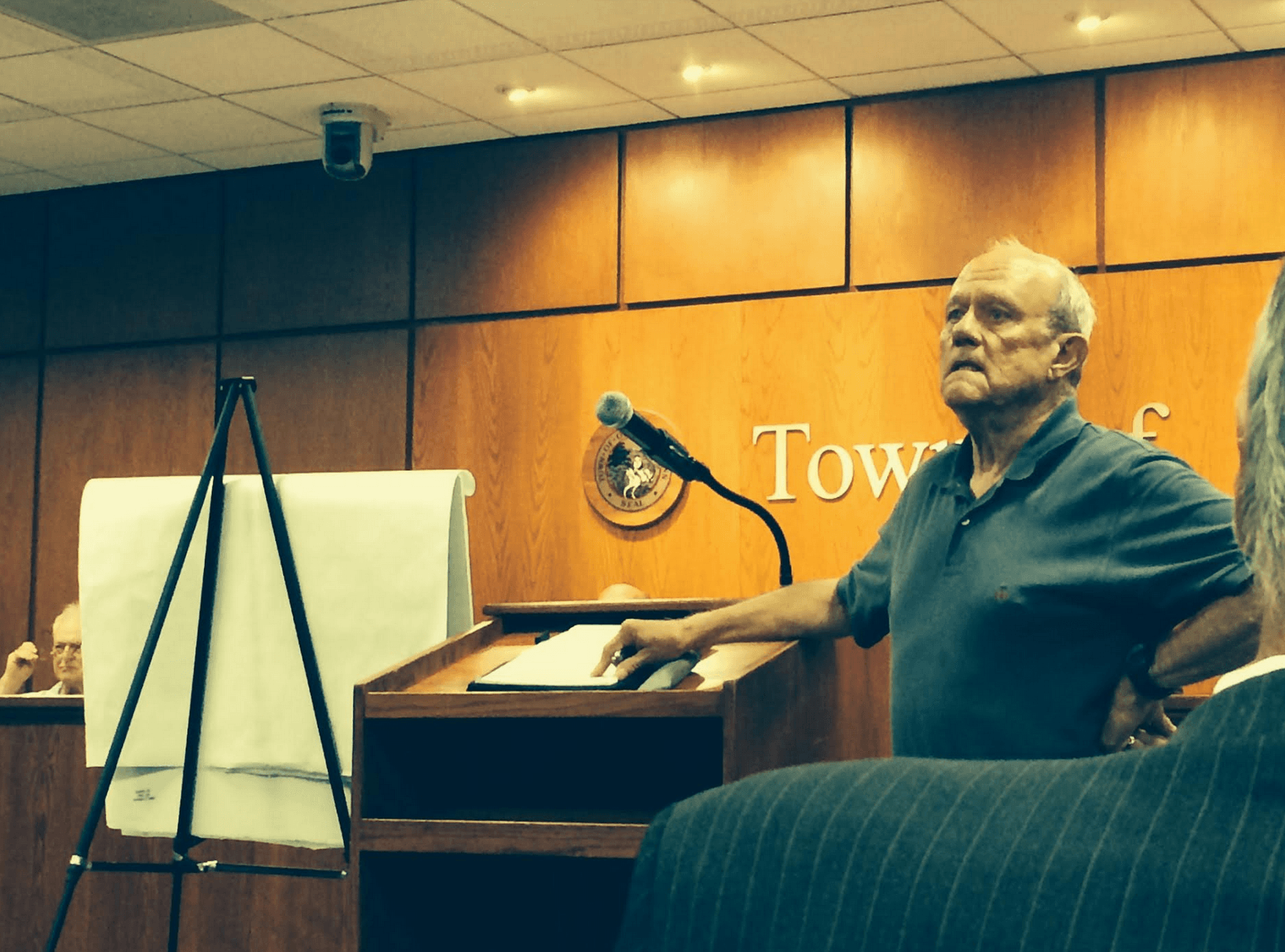 Glenville resident Steve Hall said despite all the reassurances, he had concerns about discharge to Long Island Sound and water quality.

“If we have 100 year flood and he pump station gets flooded, what happens? Do we end up with sewage in the street?” Hall asked.

Attorney John Tesei said there would be a decrease or no change in runoff through a 100 year storm. And better yet, he promised that the pavement system would increase the quality of water discharged off the site.

Bob Clausi from the Wetlands Agency said that along with the impervious pavement, the applicant proposed some green roof. “That’s a bonus to the level of water treatment coming off the site,” Clausi said, adding that the applicant also proposes to enhance the wooded edge of the Byram River with native plantings and a walking path.

The project would include streambank stabilization. Mr. Clausi noted the applicant does not plan to remove the large trees along the river bank because they are vital to the structural integrity of the bank, and that the proposal would stabilize badly eroded segments of the river bank. Also, an existing footbridge would be removed pending consent from the property owner on the west side of the river. 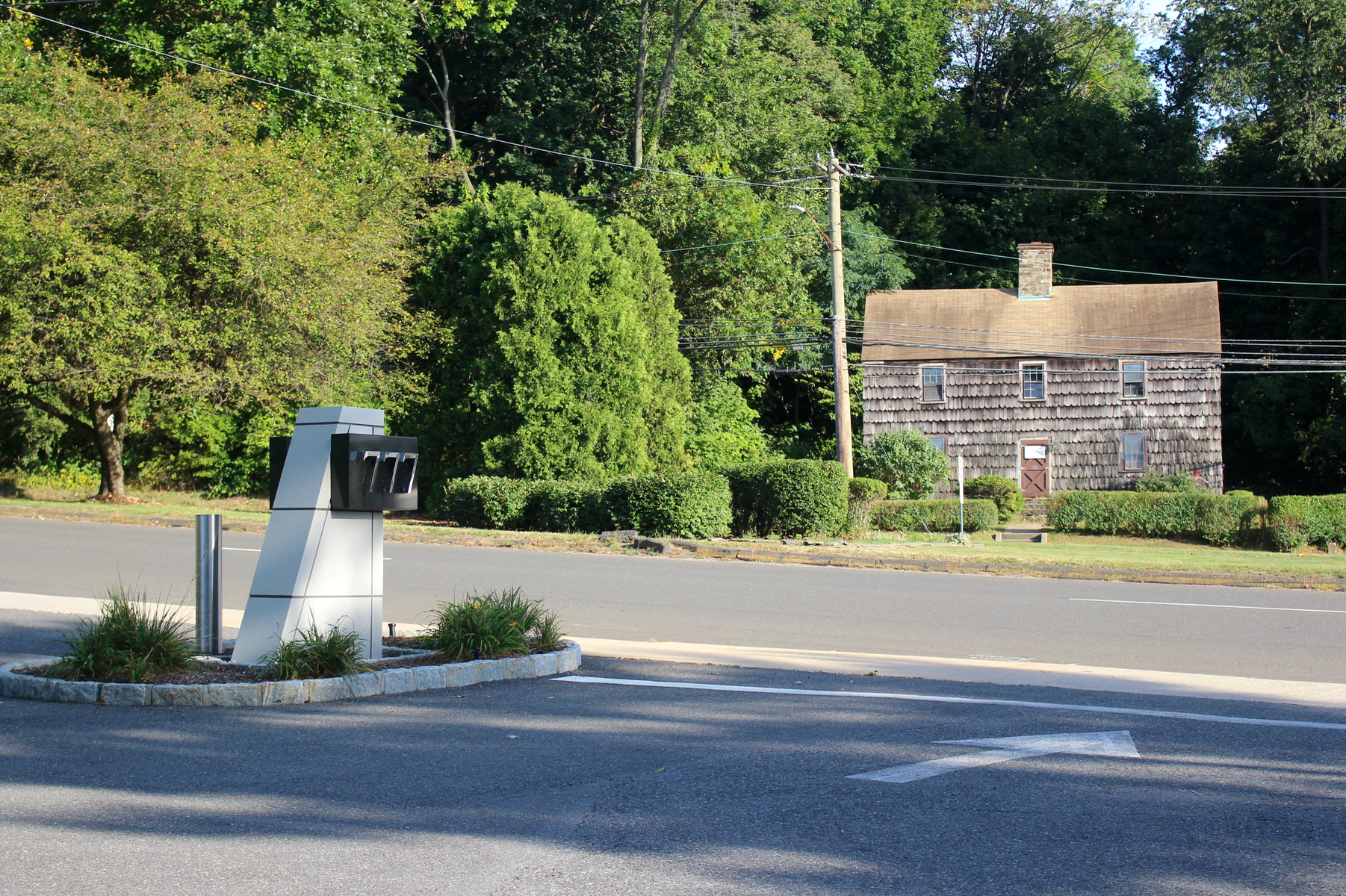 Also, Mr. Clausi said the project entails relatively small amount of excavation, and the applicant’s plan includes a truck washing station so trucks can have their wheels washed out, and a de-watering plan above and beyond what is required.

The applicant said they plan to file with P&Z commission on Thursday or Friday for a special permit and site plan approval for addition of residential building.

Attorney Tesei said the application will be brought under 6-110g of the town zoning regulations and is “fully compliant with the town’s building zone regulations.”

Further, he said under 6-110g, the development will include 20% moderate income units, which would for example, give priority to employees of the hospital, fire department and GEMS.

A letter crafted by environmental consultant Jay Fain, Principal at Jay Fain & Associates and Leonard D’Andrea, engineer with Rocco V. D’Andrea, Inc, was intended to address citizen concerns regarding impact on the watercourse.

Fain said his firm did a field delineation of the Byram River. “It is well defined. There are no wetlands there,” he said.

Asked where the high tide line reaches, Fain said it comes up to just about Route 1, which is West Putnam Ave.

Fain said extensive soil sampling had been completed and they found  no soils other than “urban soils.” Other other parts  of the site, he said, “Native soils have been long gone – we’re talking 50 years or more.”

Leonard D’Andrea said that after reviewing a flood insurance study, and proposal was to elevate the building above the base flood elevation, with a first floor elevation 5 ft above that. He said that if the building has to be evacuated in a flood, the flood preparedness plan would alert residents to designated areas in western Greenwich to remove their cars.

Given the proposed 120 units, Mr. Benton of the Wetlands Agency asked the applicant whether a study been done on the impact on the sewer system.

“We met with Richard Feminella (Wastewater Division Manager in the Greenwich’s Dept of Public Works, Sewer Division). We thought initially we’d have to put in our own pump station. After they thought about it, we decided we’d take this building by gravity to the existing pump station,” Mr. D’Andrea said.

Mr. Benton asked how the site was impacted in Hurricane Sandy and Mr. D’Andrea said that in that event, water reached level 10. “It probably creeped over the banks. The center of the parking lot is about elevation 10.”

“We plan to work closely with staff. I have quite a bit of restoration and enhancement experience,” Fain said. “We’ll enhance and rehabilitate as much as we can. We’ll aim to reconnect the river to people. It’s not a pleasant place right now. That’s how stewardship evolves: to reconnect people to the river.”

Mr. Clausi recommend the Agency issue a permit including with some conditions outlined the Agency’s staff report.

Mr. Benton made a motion to approve the application with conditions recommended by staff. Brian Harris seconded it. The application was unanimously approved.

The application will next go before Planning & Zoning Commission.