Mark your calendars because the League of Women Voters of Greenwich have scheduled three debates, starting right after the Labor Day holiday. 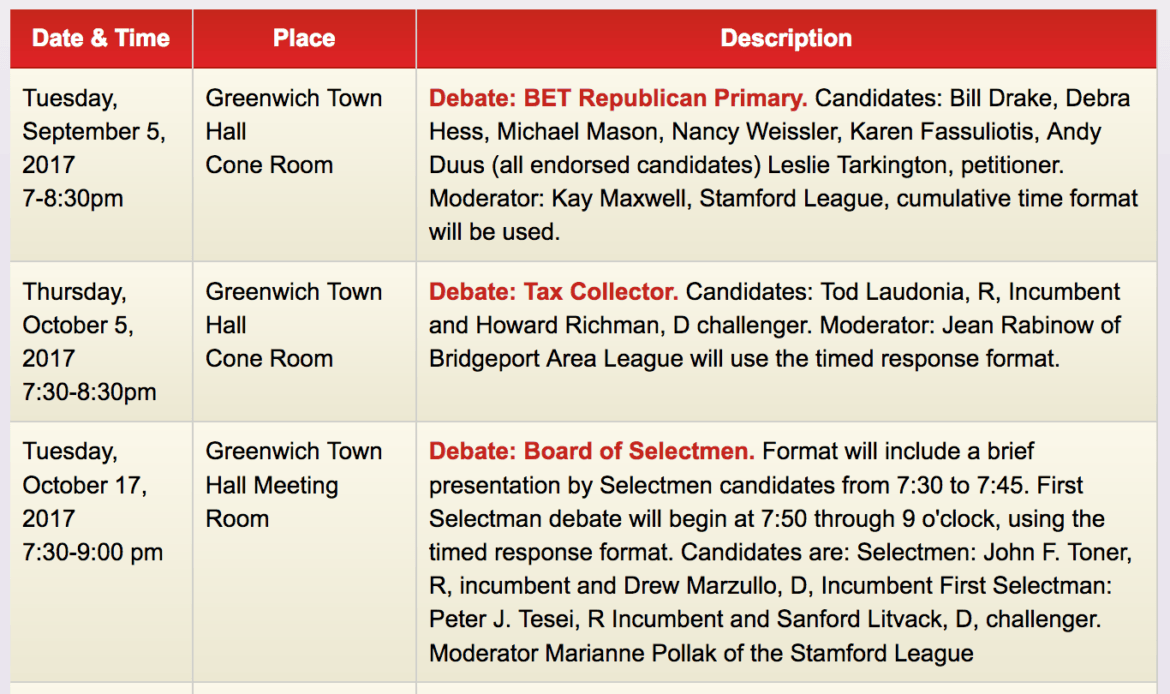 The first debate is in the Cone Room on Sept. 5, from 7:00pm to 8:30 pm. This is the debate for the Republican Board of Estimate and Taxation, with endorsed candidates: Bill Drake, Debra Hess, Michael Mason, Nancy Weissler, Karen Fassuliotis, Andy Duus, plus Leslie Tarkington, who ran a successful petition campaign.

The moderator will be Kay Maxwell of the Stamford League of Women Voters. A cumulative time format will be used.

The second debate is between incumbent Tax Collector Tod Laudonia and challenger Howard Richman (D). This debate will take place on Oct 5 from 7:30 pm to 8:30 pm in the Cone Room at Town Hall. The moderator will be Jean Rabinow of the Bridgeport Area League of Women Voters. A timed response format will be used.

The third debate is for Selectman. It will take place in the Cone Room at Town Hall on Oct 17 from 7:30pm and 9:00pm and include Peter Tesei (R), John Toner (R), Drew Mazullo (D) and the Democratic challenger Sandy Litvack. This debate will be moderated by Marianne Pollak of the Stamford League of WomenVoters.

This debate will begin with a brief presentation by Selectmen candidates, followed by  a First Selectman debate using a timed response format.