Indivisible held its third all member meeting on Sunday night at Eastern Middle School Joanna Swomley welcomed a crowd of several hundred, and told them that as a group they are “quite a force” for change.

“We have a president who asserts that the press is the enemy of the people, promotes violence against CNN and journalists, does not condemn attacks on peaceful protesters or minority groups. We have a president who flouts the rule of law, most recently with the outrageous pardon of Joe Arpaio. His administration is dismantling the EPA, civil rights, and voting protections,  consumer protections. The list continues,” she said. “And he emboldens white supremacists, giving way to the significant rise in hate groups and to the bullying that is going on in our schools.”

Swomley said Indivisible, with 6,000 local chapters across the US, is the most viable means to stop Donald Trump’s extreme agenda.

“We Indivisible groups across the country have played a role in this remarkable accomplishment. Eight months in, despite control in both houses of Congress the president’s legislative agenda has been thwarted,” she added. 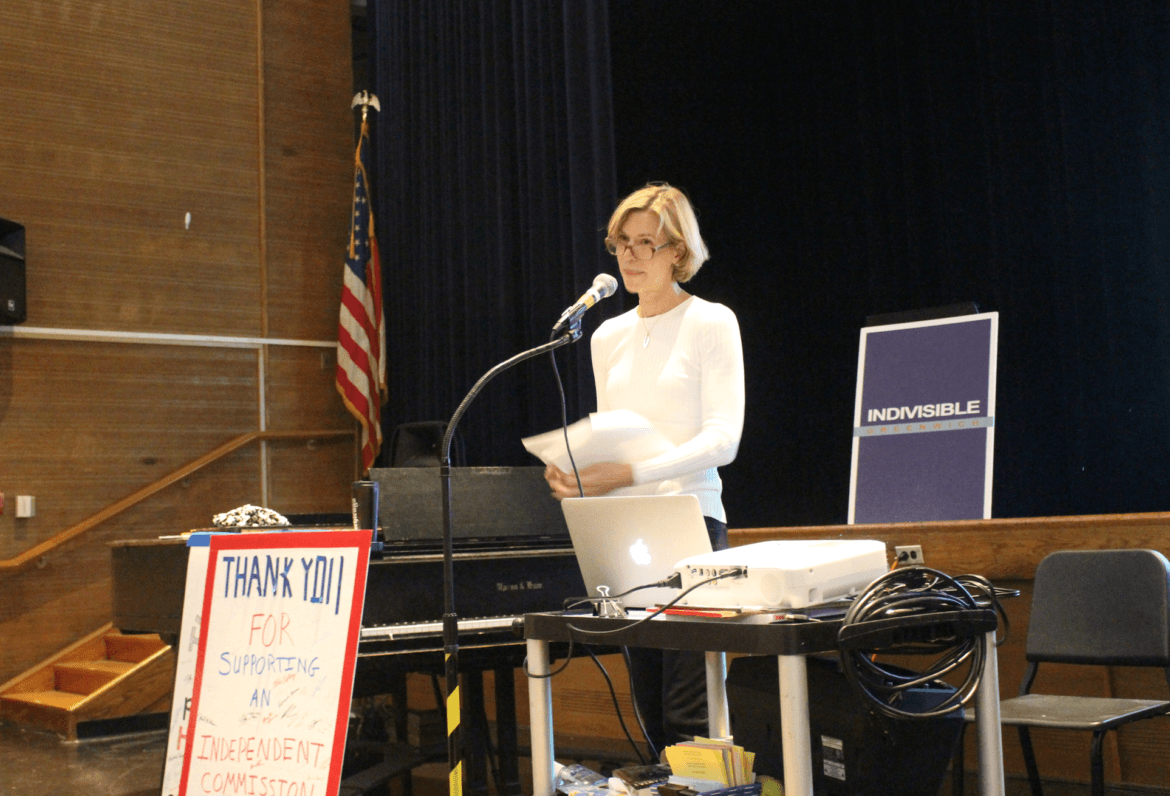 Indivisible Greenwich’s Nerlyn Pierson said that in Greenwich, “A group of hard right Republicans are trying to take over our school board. The report that they put together in support of charter change specifically states that this, a take over of the Board of Education, would drive an examination of the platform of each party,  perhaps even encourage each party to develop a version of their party’s national education platform – something that neither has been able to do to date. That is going on in our town.”

Swomley said 43 members of Indivisible and MarchOn are running for RTM.

Also, she said, Indivisible supports candidates Drew Marzullo and Howard Richman, as well as Republican Peter Bernstein, who, she said, “Stood against the attempted takeover of the Board of Education and paid a price.”

Jim Himes said that after Donald Trump won on election day in November, he questioned whether or not to continue his work in government.

“I never imagined the Oval Office would be occupied by someone so unfit. A person who celebrated bigotry, celebrated racism, who was demeaning to women, who did not understand the beauty of our system of checks and balances – all those things enshrined in our Constitution,” Himes said.

Himes said that during Trump’s first eight months, “Most of what we feared has not transpired. A Muslim ban was not implemented. A wall has not been built. And we have not thrown 20 million Americans off of health insurance. The reason for this is you and people like you across the country.” 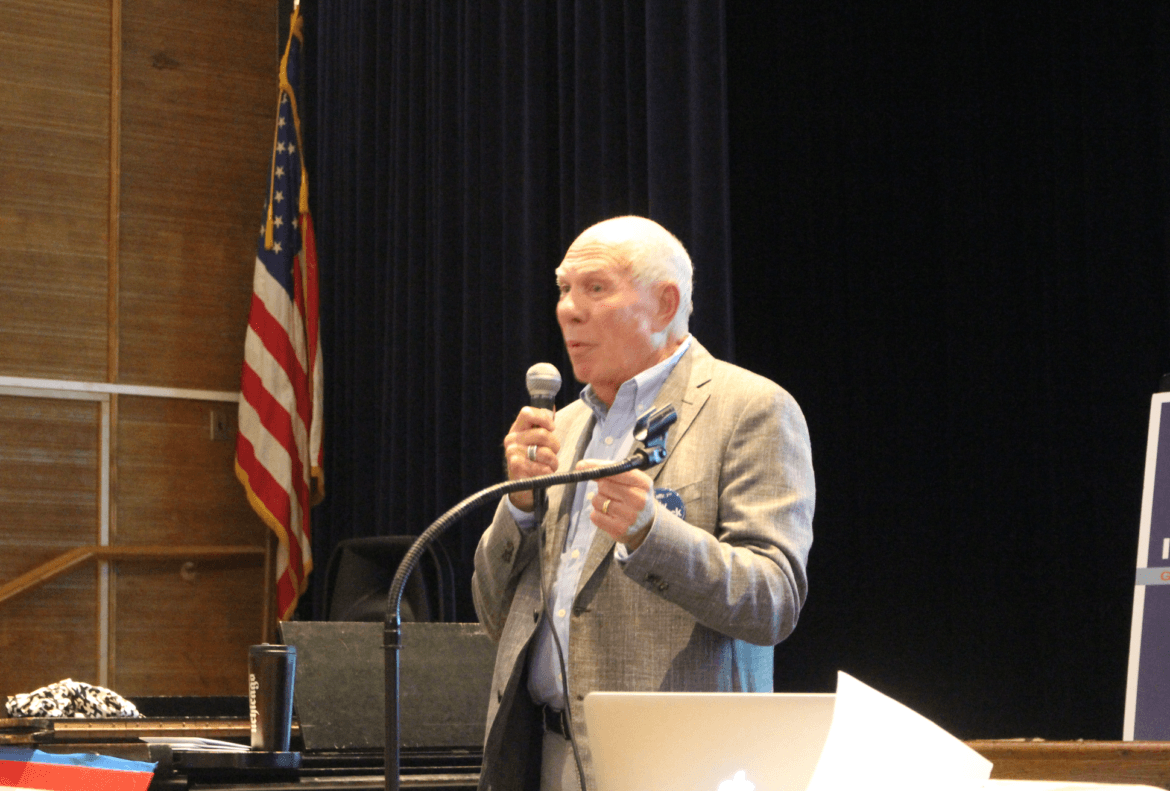 “I knew him when we were together in the US Department of Justice – I was US attorney for Connecticut and he ran the Anti-Trust division,” Blumenthal said of Mr. Litvack. “From there, he went on to run a major law firm and the  was the general counsel for Disney, which he ran with thousands of employees around the world.”

Blumenthal said the fight of the moment is for The Dreamers who otherwise face deportation.

“Deporting them would cost hundreds of billions of dollars, which is why the business community 0pposes it,” he said. “When I think about what Donald Trump says about the Dreamers – ‘They’re incredible people – We love them,’ and now he’s going to deport them? It is the height of hypocrisy and inhumanity. To talk about people that way and force them to go through this terror is cruel and irrational.”

Blumenthal said he believes Dream Act, which he co-sponsored for six years, is achievable.

US Senator Murphy said the country is in a period of retrenchment. “You can look at this as glass half full, or glass half empty,” he said.

Murphy said that last January, Paul Ryan, Mitch McConnell and Donald Trump likely were imagining all the legislation they would pass by September.

US Senator Murphy introduced Sandy Litvack, who is married to Indivisible’s Joanna Swomley.

“Talking about Disney, I have to tell you two things. One is when people talk about difficulties – about dealing with Hartford. I dealt with the French on the restructuring of Euro Disney! That’s tough,” Litvack said to a chorus of laughter.

“Donald Trump is not on the ballot, but who he is, and how you feel about him is on the ballot, and where candidates stand on that issue is important,” Litvack said. “I stand very clearly. Donald Trump has denigrated the office of the  White House. He is a disgrace and he is unfit to hold the office,” he continued.  “Where my opponent stands, we’ll have to find out.”

“The focus on the mill rate – that’s a myopia. We all love Greenwich and the way to do this is through the efficient management of the town. We have candidates running for the RTM and BET. And if we can turn this town blue, we can deal with the entire quality of life.” 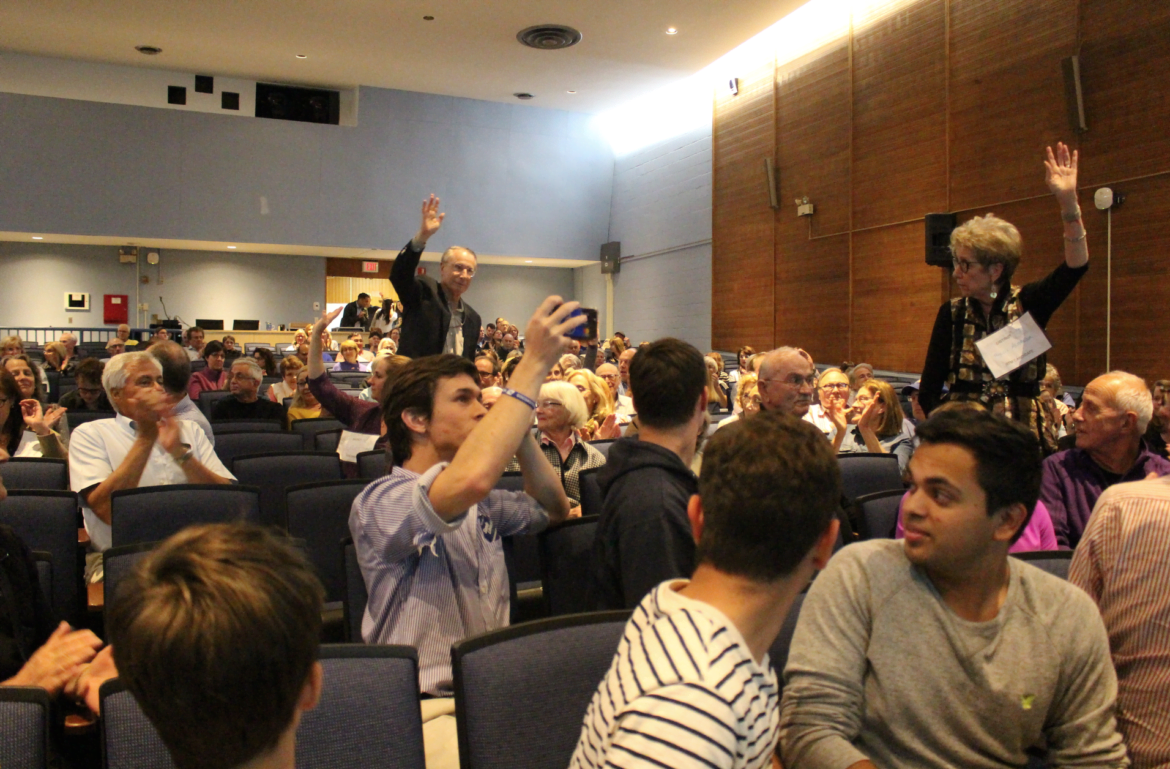 Sandy Litvack asked everyone running for office in November to stand up. Sept 10, 2017 Photo: Leslie Yager