Sergeant Thorme offered a wealth of information, having served in many different capacities over his 23 years on the force.

Thorme, who is now in community policing and is the go-to person for the upcoming Sept 27 Thank-A-Cop Day at Joey B’s, was also a dog handler from 1999-2008, with Shilo in the K9 unit. He has also worked in Narcotics.

Thorme said the average age of new recruits has gone up in recent years because college is now a requirement.

“People had entered the force in their early 20s. Now it’s closer to 27- to 29-years old on average,” he said. “Also, New York and New Jersey have an age limit, but Connecticut does not.”

He said that as a result, retired police from out-of-state can hold on to their pensions and join the Greenwich force, bringing with them a wealth of experience.

“We get frequent New York retirees because they can’t get their pension and still work there. And we’re the first town over the state line,” he added.

And while the average age of a new officer is higher these days, the Greenwich force is somewhat younger because of recent retirements and departures. In fact, on Thursday interviews were being conducted for approximately eight positions. When fully staffed the force has 155 members.

Sergeant Thorme, who serves as an instructor for WMDs, canine instruction, and Personal Protective Equipment (PPE), showed the delegation around the state-of-the-art classroom, which features a SmartBoard and has Surround Sound. Not only does Greenwich Police host training sessions that are a destination for law enforcement from surrounding towns, but, according to Thorme, curriculum for the Citizens Police Academy has been adopted by other forces.

“Other forces took our syllabus and programs, including the Citizens Police Academy and Women’s Self Defense Classes,” he said, adding that other towns have also modeled their community impact officer on that of Greenwich. 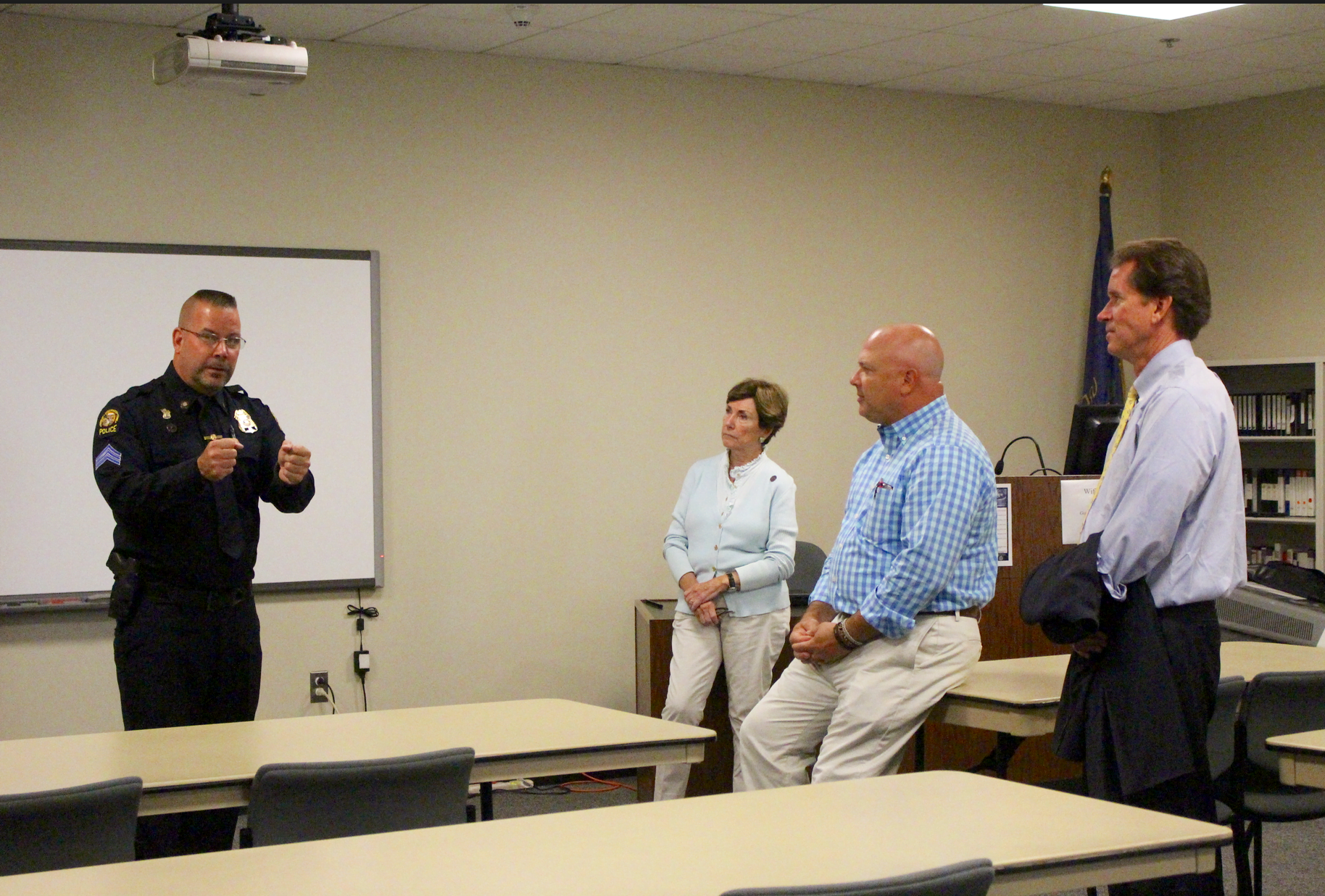 Greenwich Police headquarters has a state of the art classroom, making it a destination for police and other officials from other towns. Sept. 8, 2016 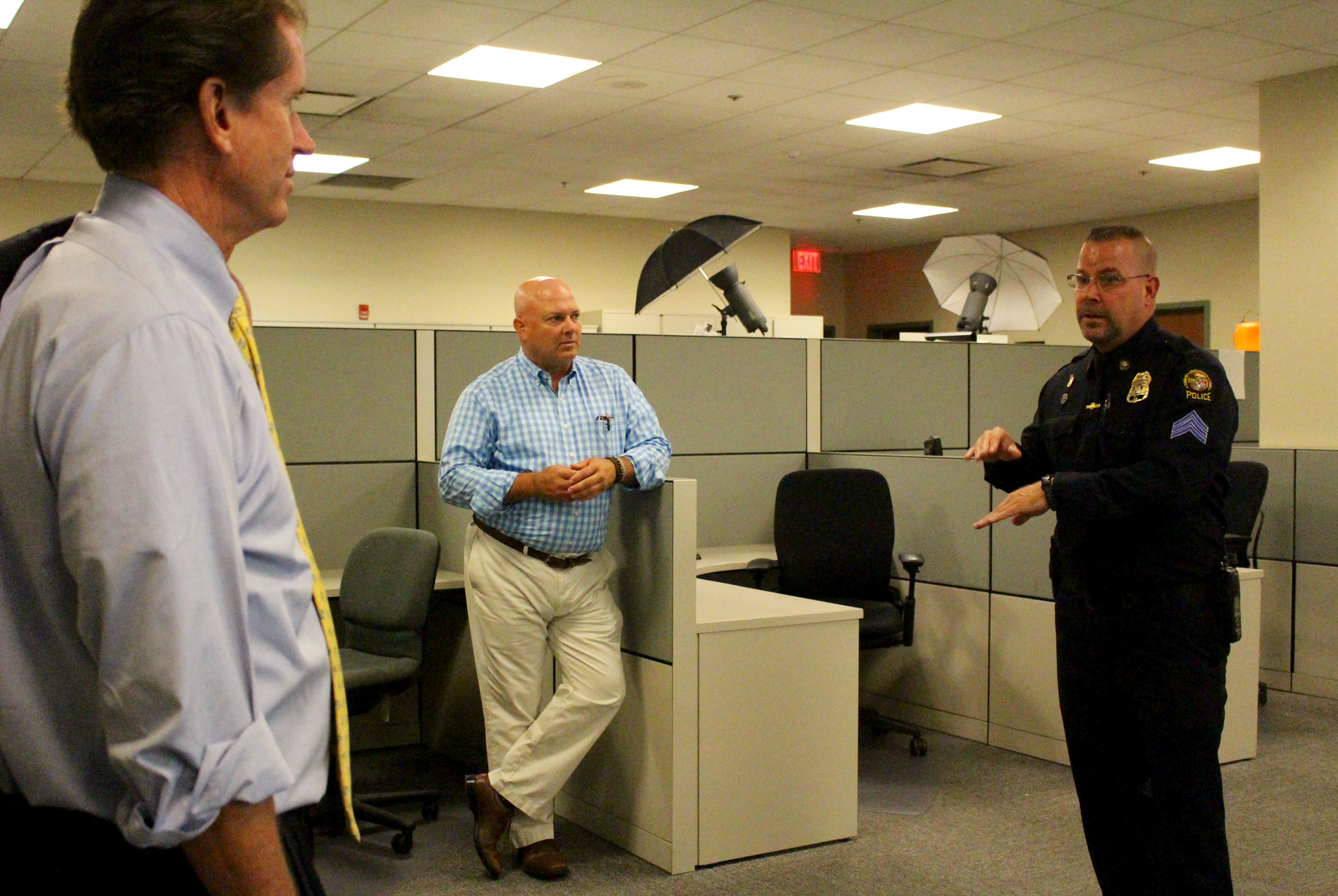 Sergeant Thorme introduced the Greenwich Delegation to Sergeant Mark Zuccerella who works in the Special Victims Unit. “He works to solve crimes involving the elderly and children,” Thorme said.

State Rep Floren asked Sgt Thorme to explain the purpose of a red box marked SAVAGE adjacent to the lockers where officers on Patrol return rifles, radios, tasers and other equipment. “It’s for the safe unloading of a gun. A round will not penetrate it,” Thorme said. 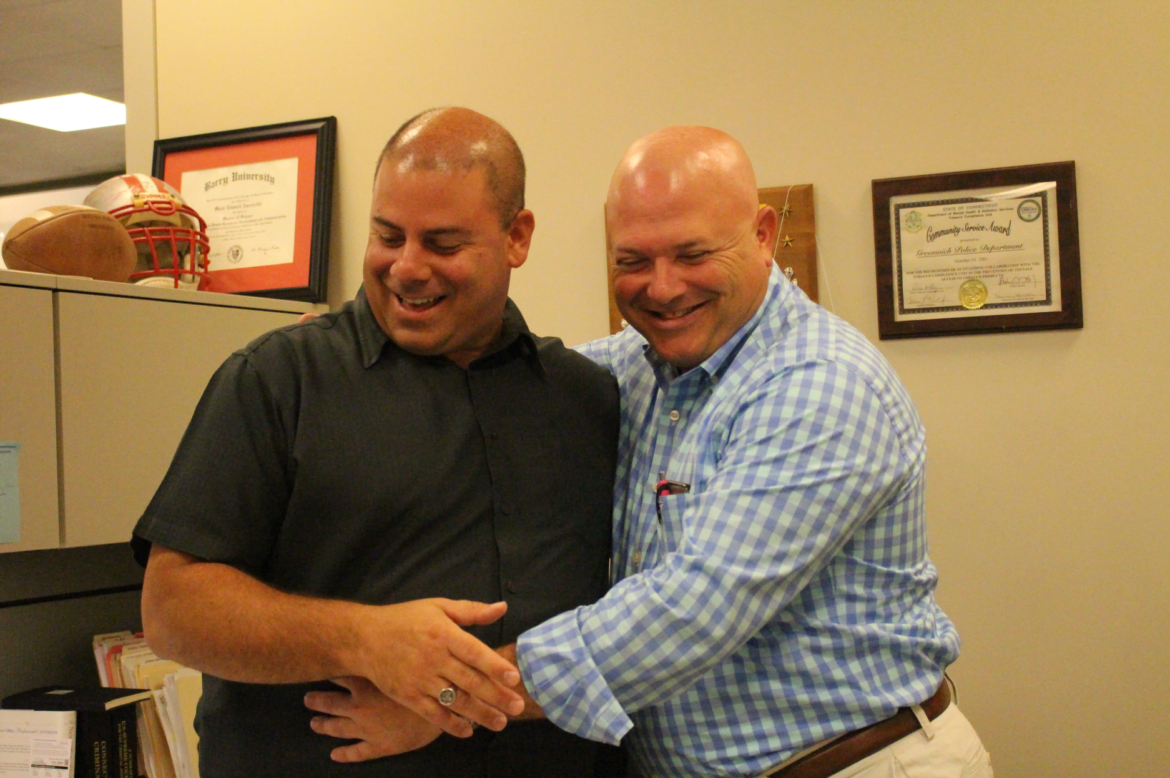 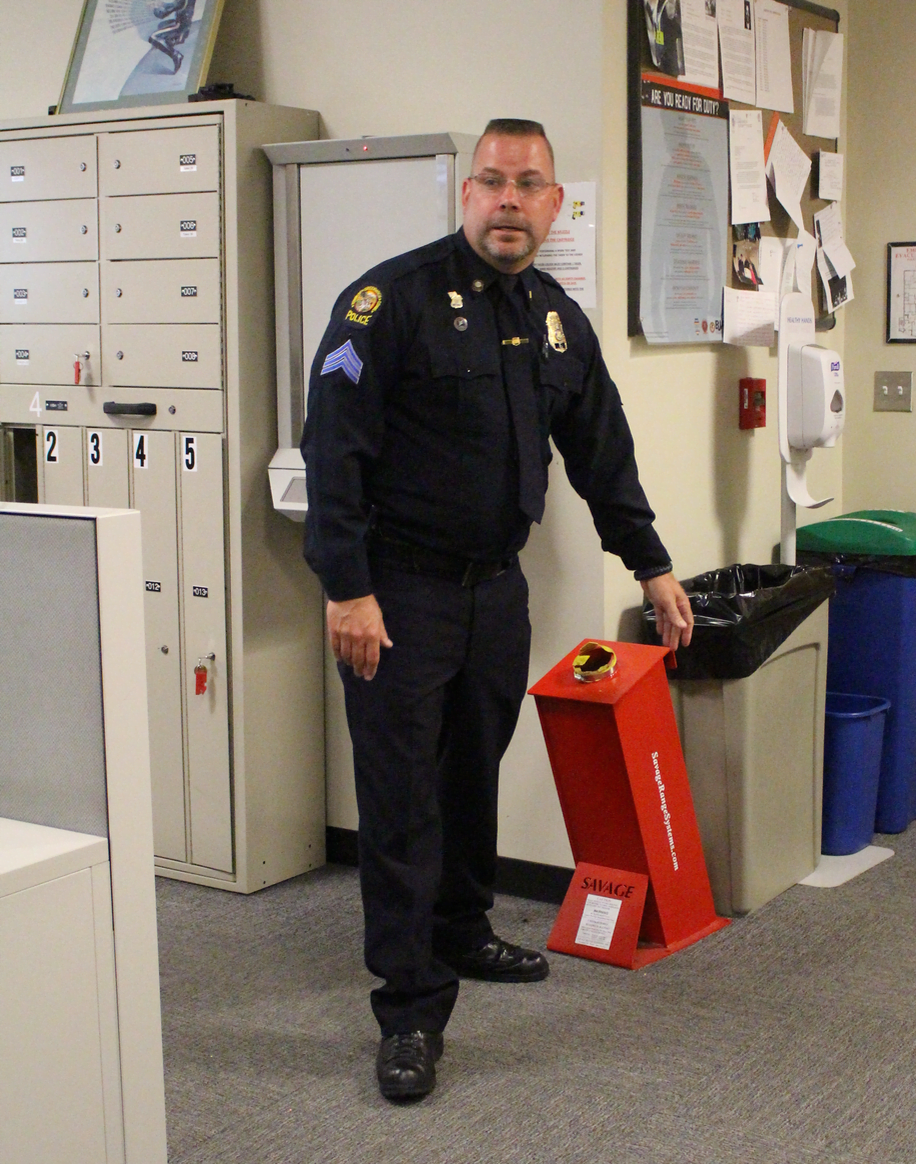 Sgt Thorme said that a red box marked SAVAGE adjacent to the lockers where officers on Patrol return rifles, radios, tasers and other equipment is for the safe unloading of a gun. “A round will not penetrate it,” Thorme said.

Other stops on the tour included the detectives’ work area, forensics, a small cafeteria with vending machines and television, and bunk rooms. “There are male and female dorms,” Thorme said, adding that during storms when officers are on 16-hour tours, rather than commute home to towns as far as Trumbull or Monroe, it is vital to have the bunk rooms. With the cost of living in Greenwich so high, Thorme said only about 15 to 20 officers live here in Town.

Adjacent to the detectives’ work stations are those of court technicians, formerly called court officers, who are liaisons between Greenwich Police and Stamford Superior Court. Thorme explained that bond is set either by court of by a shift commander and that a relative can provide bond for someone arrested, but often a bail bondsman is used.

“The bondsman’s fee is 10-20% of the bond,” he explained, adding that a bond might be particularly high in the case of a person who has failed to appear in court more than once. “The high bond assures the court that you’ll show up,” he said. 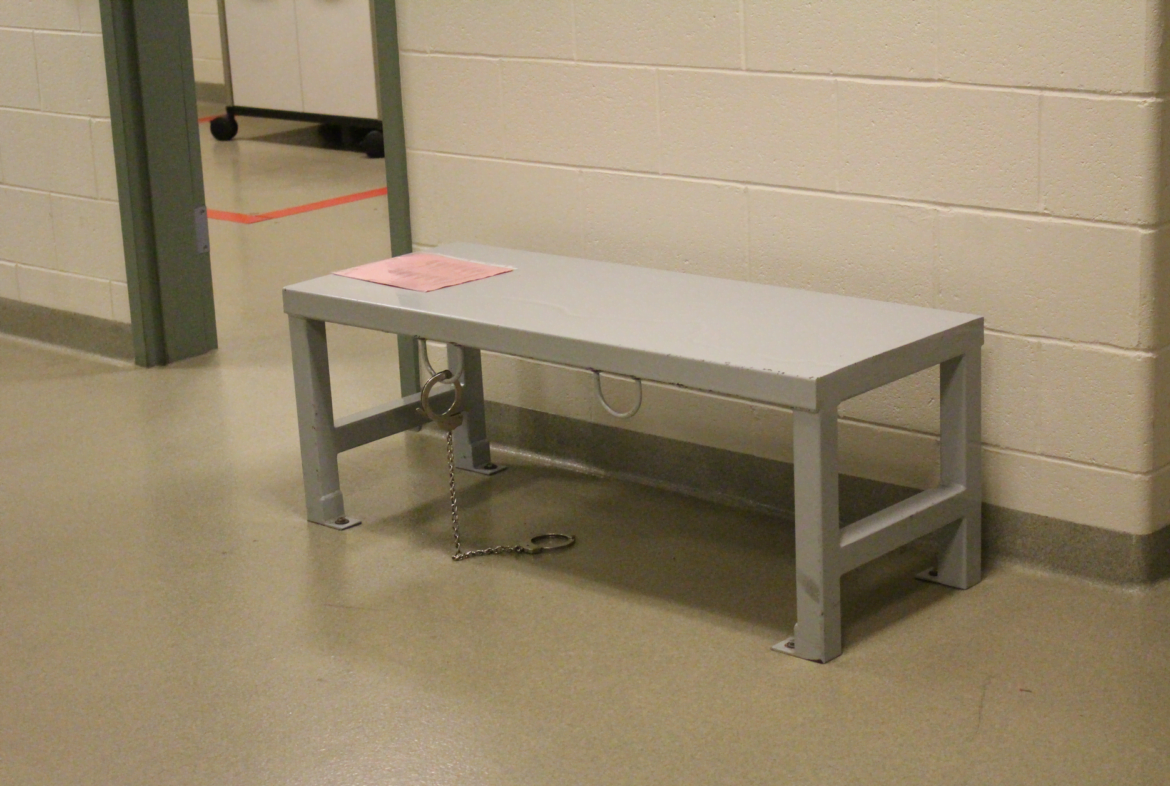 In the processing area at Greenwich Police headquarters, a bench fit with handcuffs had a laminated list of bail bondsmen. Sept. 8, 2016 Credit: Leslie Yager 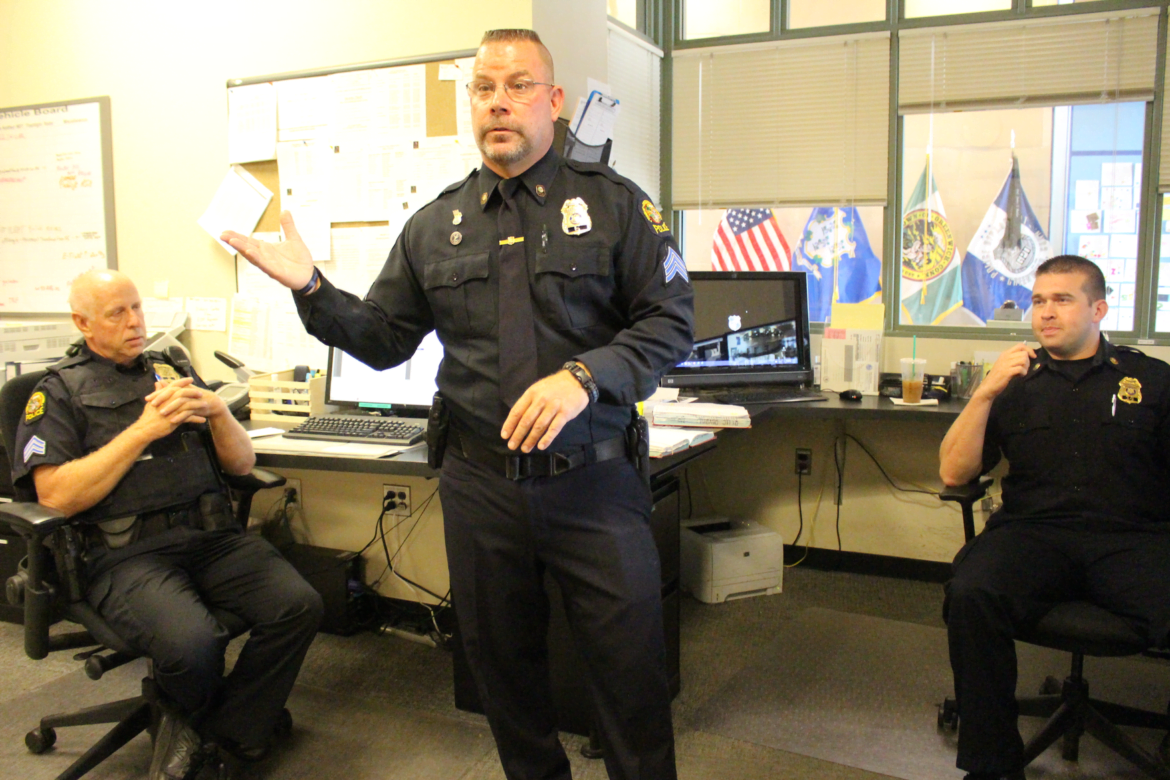 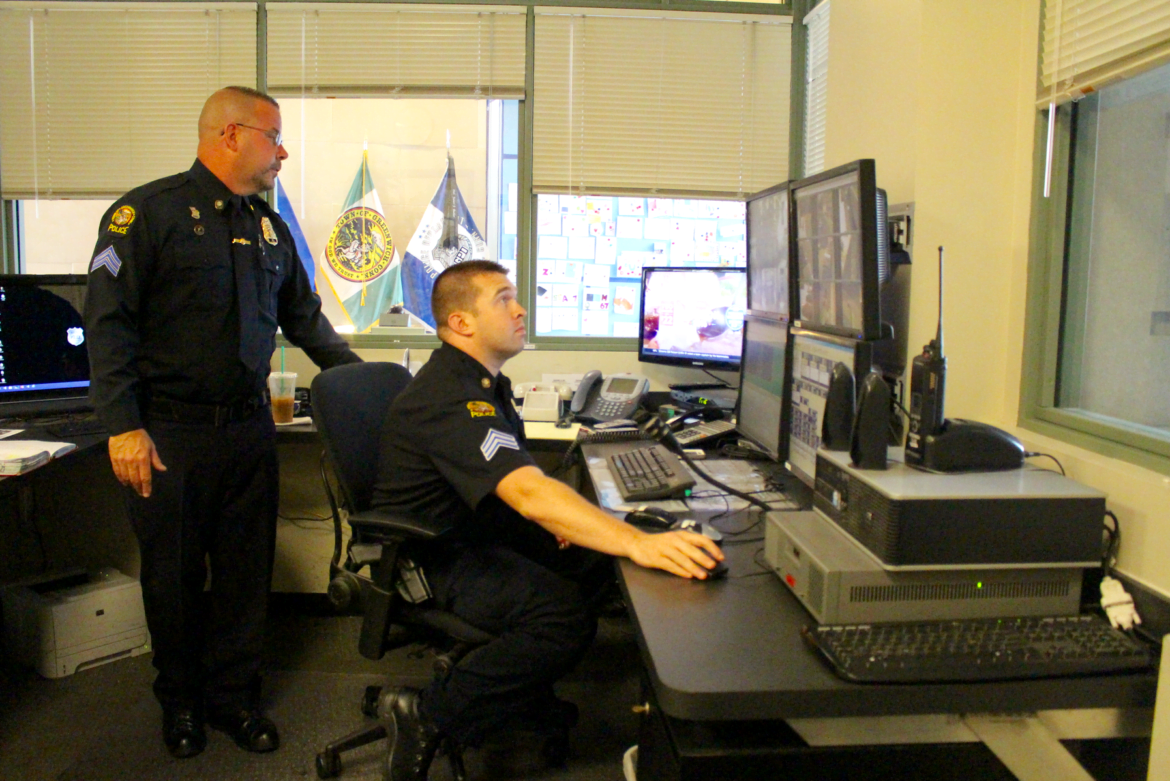 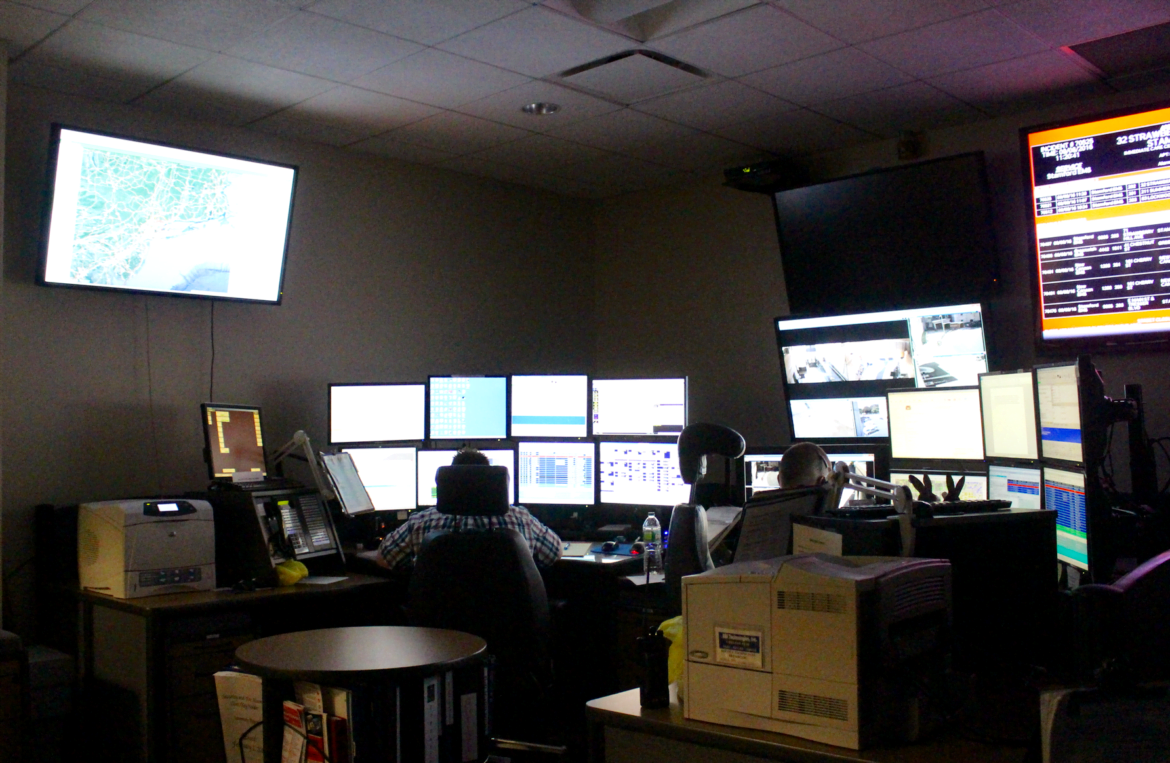 In the dispatch center, the 16-strong civilian force work in 8-hour shifts around the clock, three or four people at a time. The windowless call center features walls of giant monitors and an array of phone lines. Computer screens feature weather maps and Greenwich street maps that reveal locations of fire hydrants, as well as active ambulances, police cars and fire trucks. Sept. 8, 2016 Credit: Leslie Yager 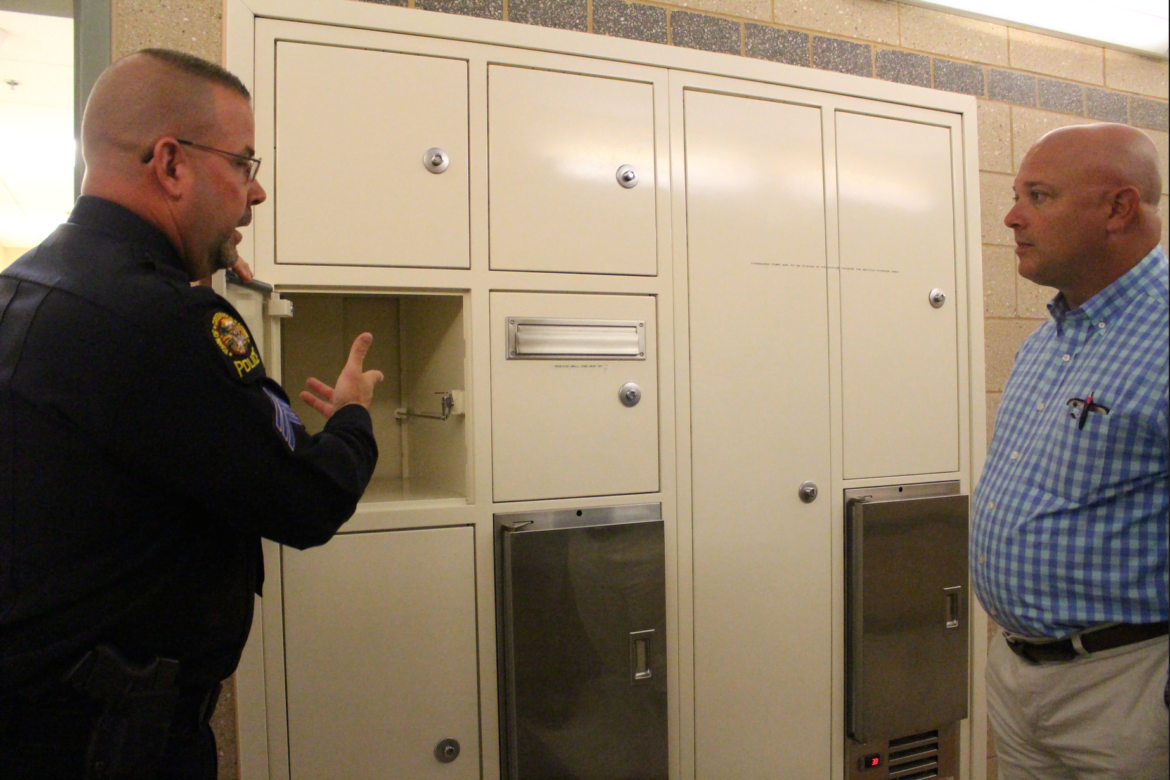 Sergeant Thorme led the tour of the processing area, where police arrive with a person under arrest via the sally port, a secure area that ensure a suspect cannot escape when they emerge from the police car for processing. The processing area includes a room fingerprinting station, breathalyzer and area for mug shots. Sept 8, 2016 Credit: Leslie Yager 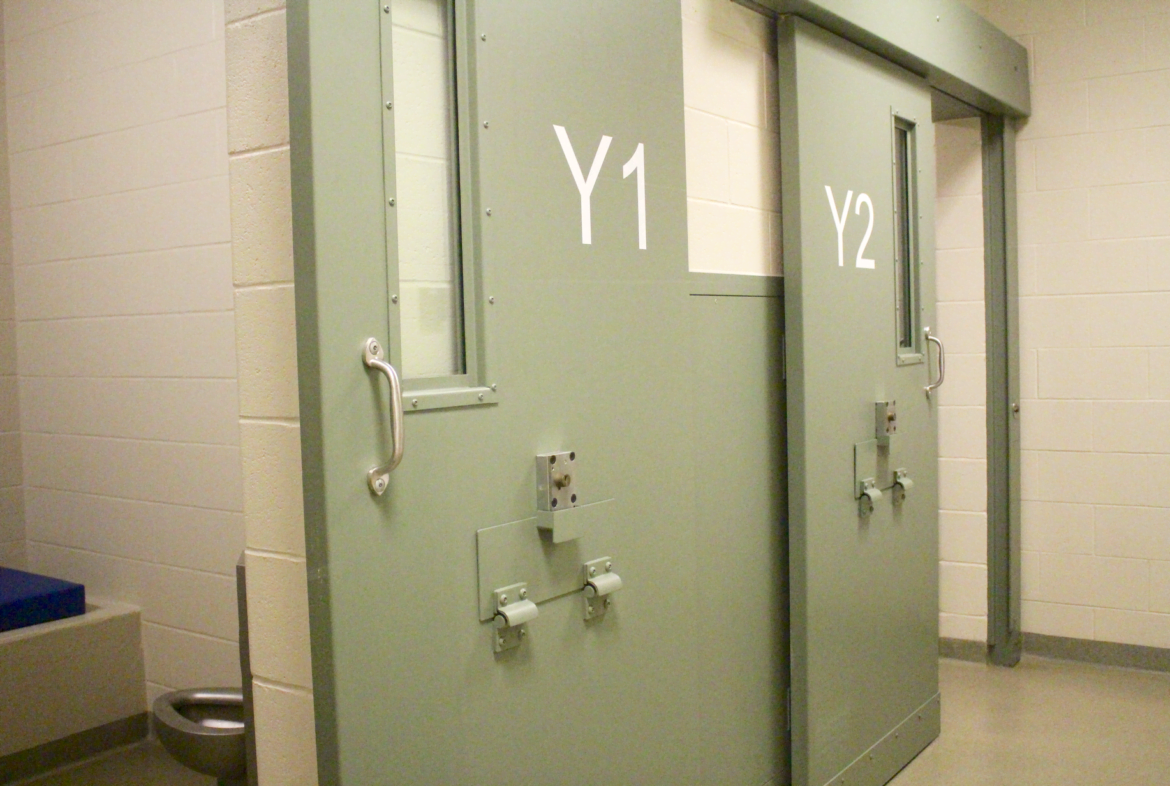 The Youth cells at Greenwich Police Headquarters. Sgt Thorme said by law they are not allowed to hold a minor 17 or under for more than 12 hours. Credit: Leslie Yager 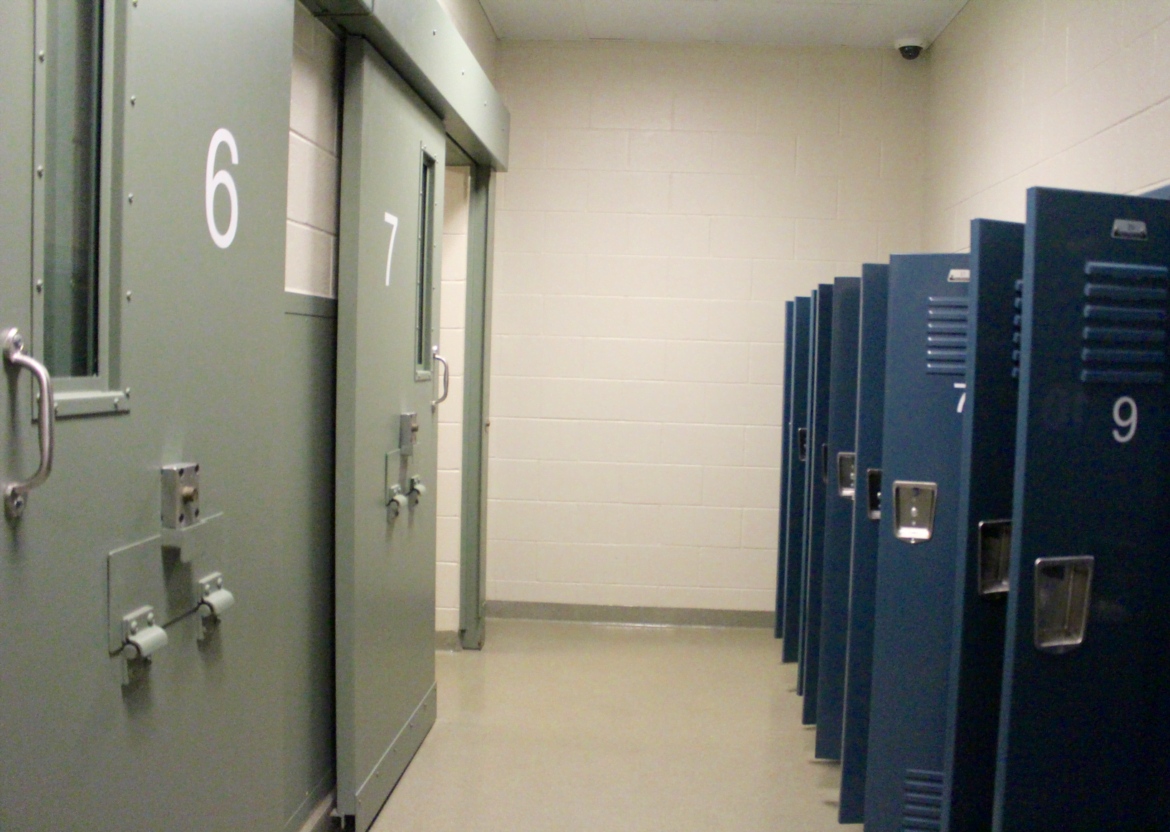 In the cell block area Greenwich Police have 23 cells. Sgt Thorme said that in the old police station there could only hold five prisoners. Credit: Leslie Yager 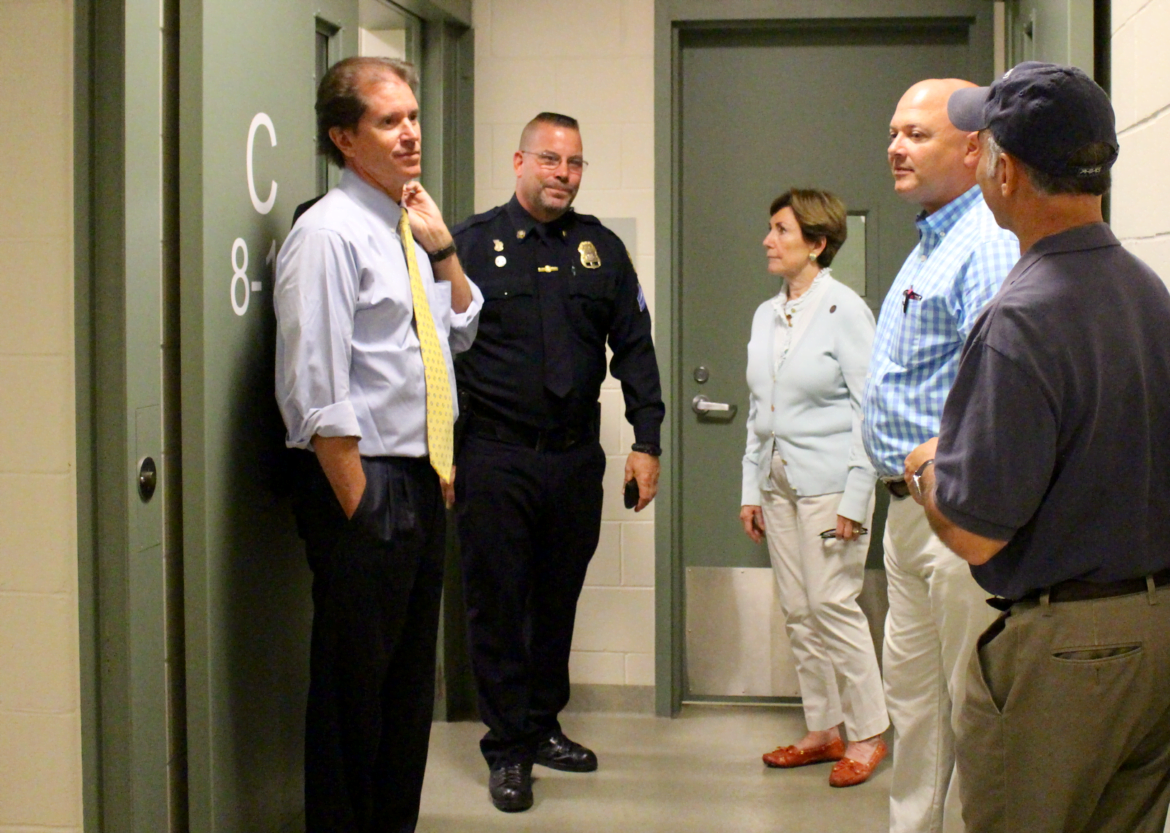 In the cell block area Greenwich Police have 23 cells. Sgt Thorme said that in the old police station there could only hold five prisoners. Those being held in the cell block get standard meals brought in from the local diner: Bacon, egg and cheese for breakfast, a ham and cheese sandwich for lunch and dinner of spaghetti and meatballs. Credit: Leslie Yager 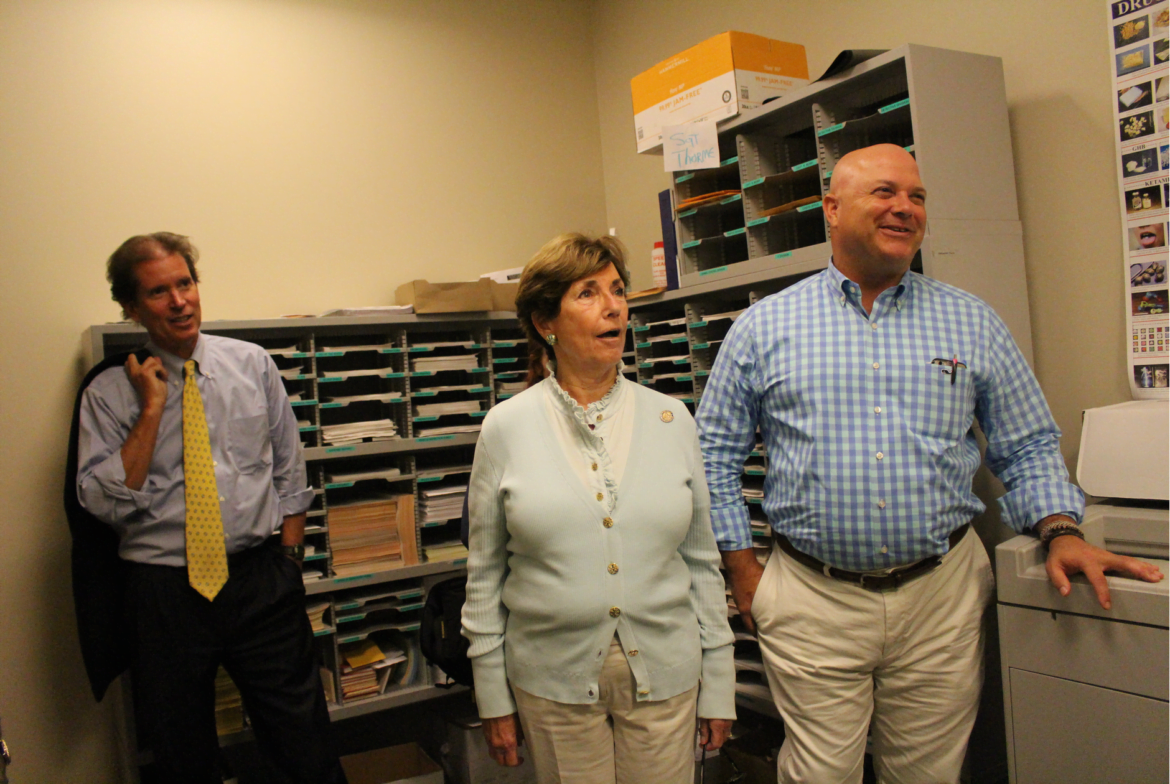 During their tour with Sgt Thorme, the Greenwich delegation stop in an area where officers can fill out paperwork. Sept 8, 2016 Credit: Leslie Yager

“Thank A Cop Day” at Joey B’s is a Chance to Say Thanks to Police, First Responders