Greenwich Police continued their series of Coffee-with-a-Cop events, designed to reach out to the community for conversations not necessarily about law enforcement, and reinforcing the fact that cops are people too. On Saturday morning, a couple dozen members of the force descended on McDonald’s on West Putnam Ave. 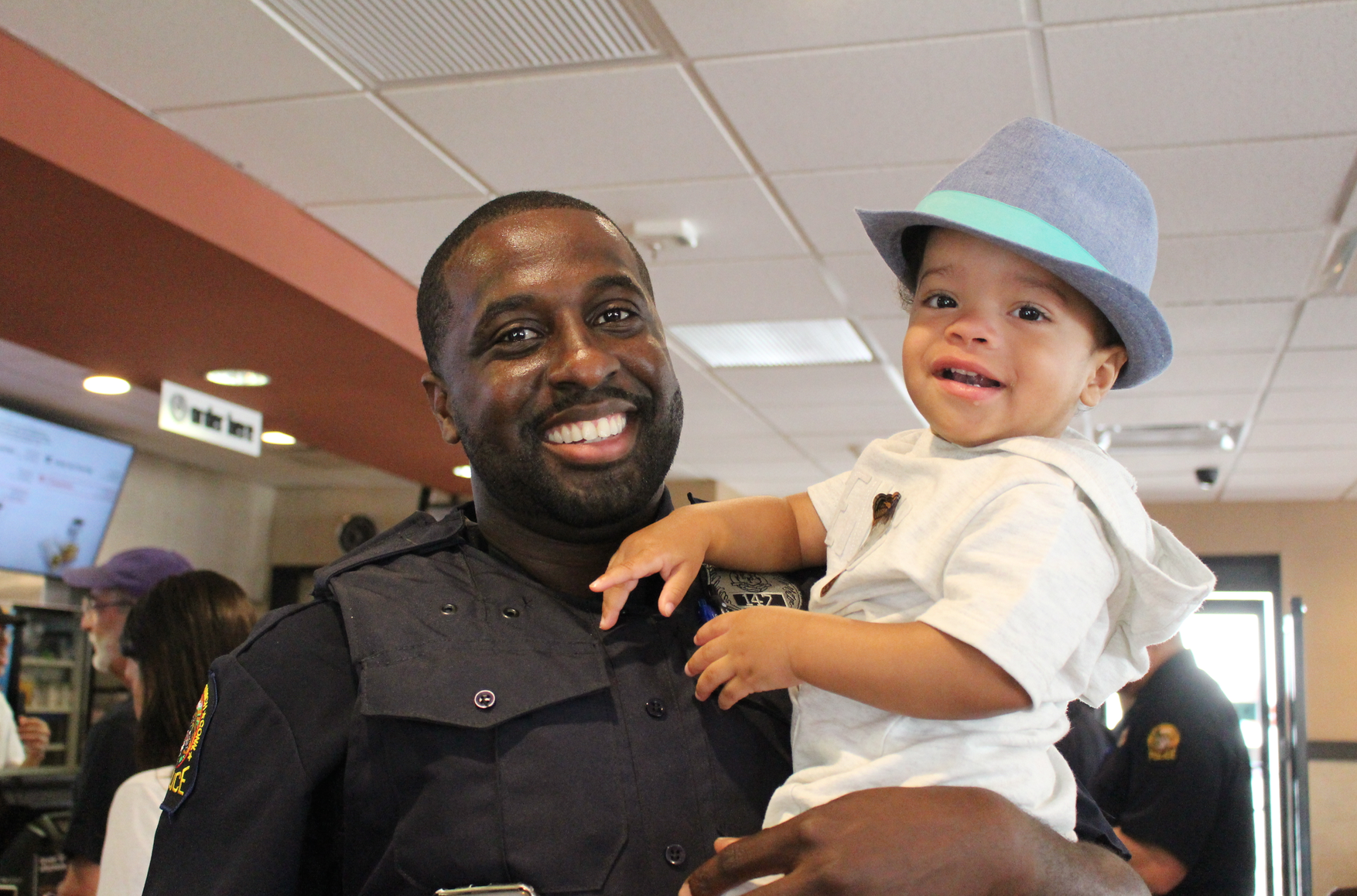 Officer Michael Hall and his baby boy at Coffee with a Cop at McDonald’s on West Putnam Ave Saturday, June 4, 2016 Credit: Leslie Yager

Officer Thomas Huestis was the designated ice breaker. Each time a customer walked through the double doors to the fast-food eatery, he got all the police to applaud and offering free hugs. Yes, it felt a bit more like Friday night than Saturday morning, and everyone loved it!

Lieutenant Gray described Coffee-with-a-Cop as a community outreach program, and attributed its success to the willingness of both the officers and Greenwich residents to break down barriers in an effort to engage and connect in a meaningful way.

Coffee-with-a-Cop began in Hawthorne, California in 2011. Today, the movement has reached over 3,000 communities throughout the United States. It offers an opportunity for candid conversation, community building, and, of course, delicious coffee.

Officer Alex Testani commented that he hopes this event will eliminate the stigma that surrounds police in Greenwich. “Cops don’t always have to be associated with bad stuff,” he noted. “People can count on us in good times and in bad.”

Officer Michael Hall and his baby boy at Coffee with a Cop at McDonald’s on West Putnam Ave Saturday, June 4, 2016 Credit: Leslie Yager 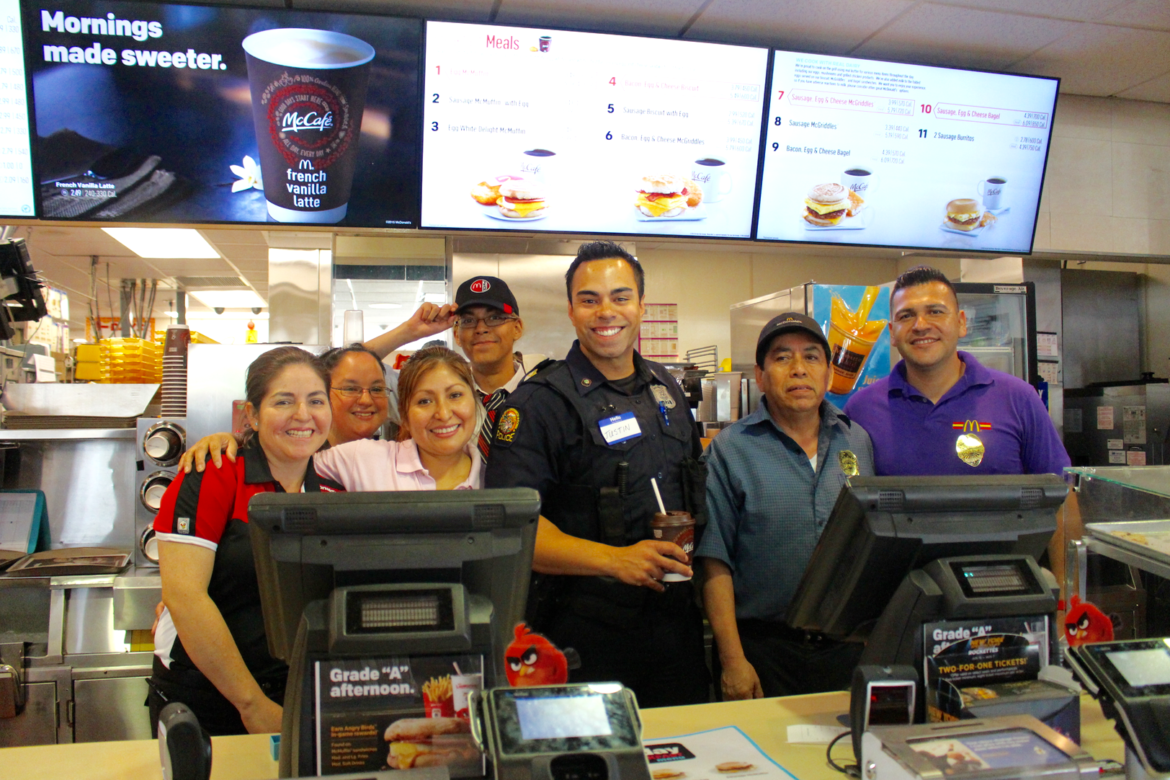 Greenwich Police Officer Justin Rivera behind the counter with the crew from McDonald’s at the Coffee with a Cop event, June 4, 2016 Credit: Leslie Yager 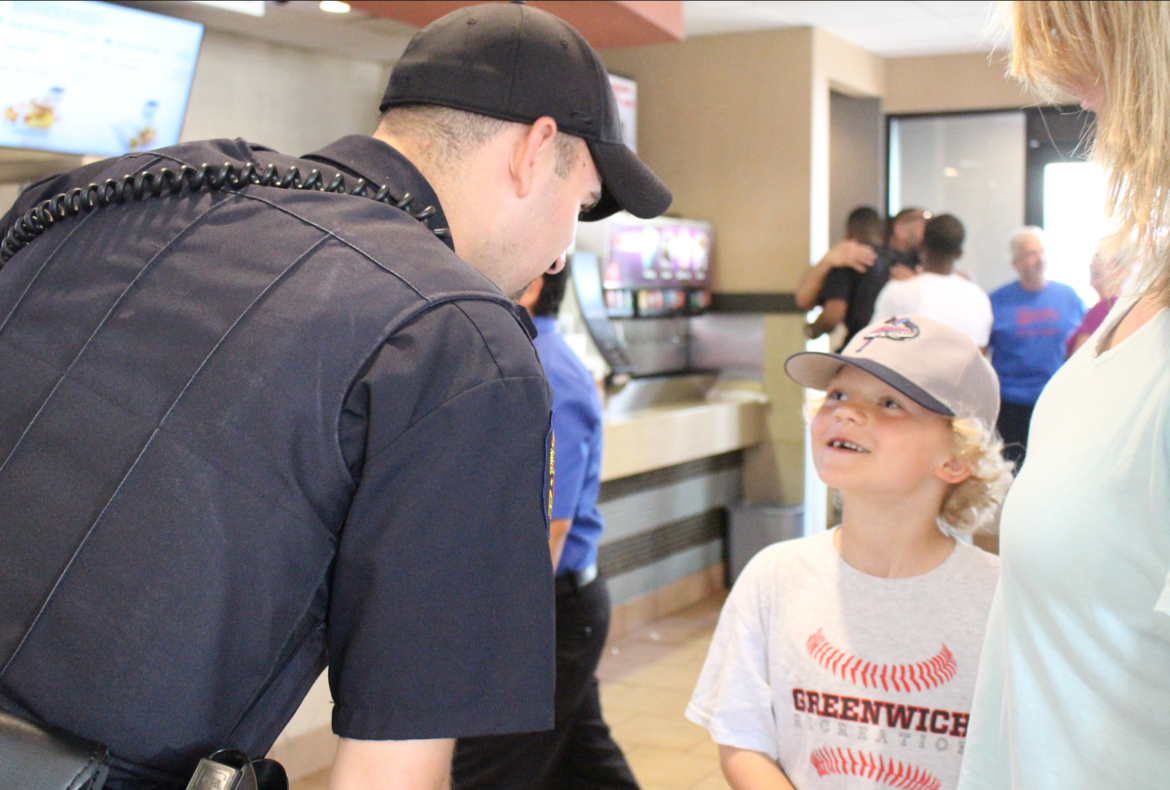 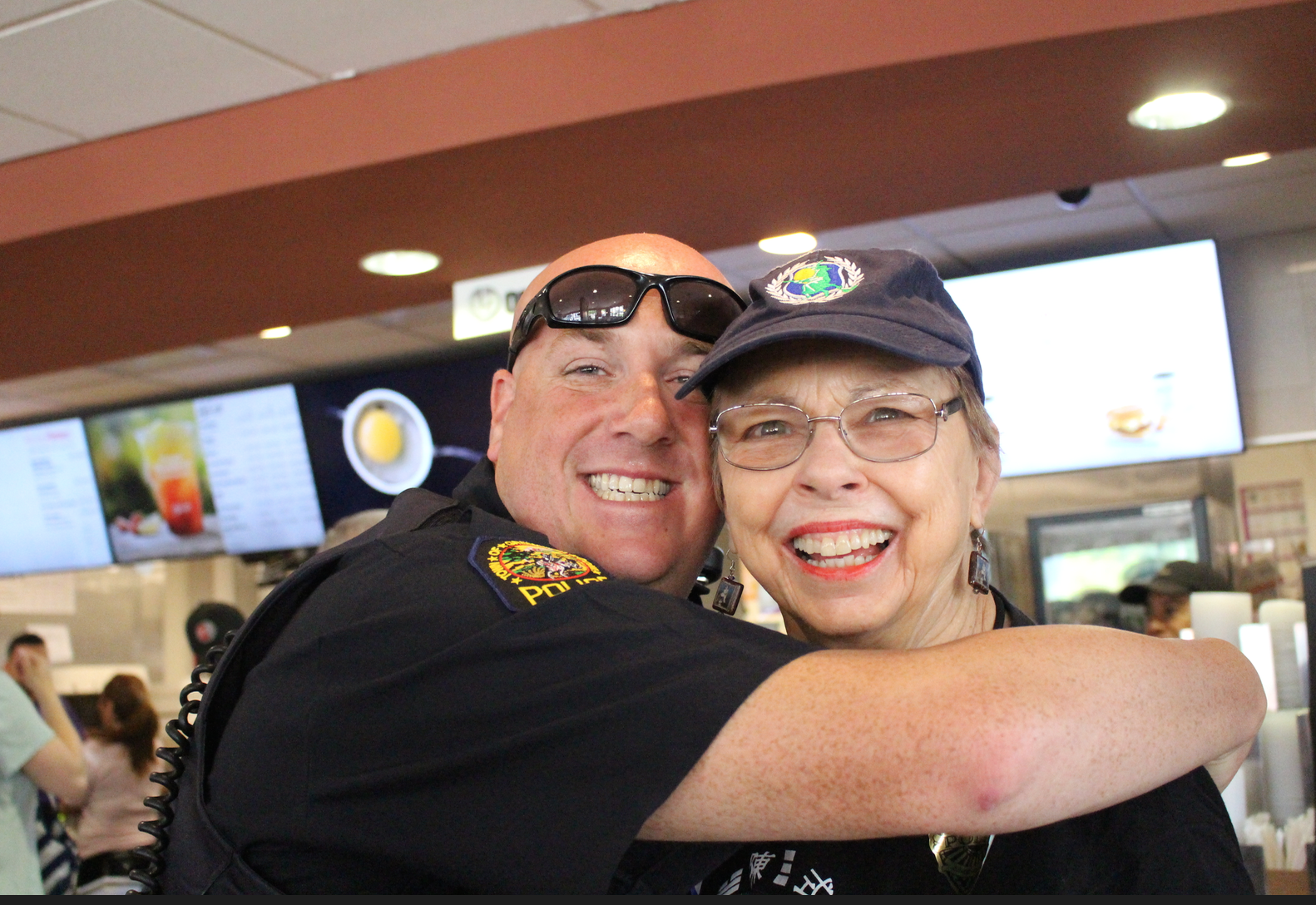 Officer Tom Heustis and Sue McClenachan share a hug at the Coffee with a Cop event at McDonald’s. Credit: Leslie Yager

Officer Shane Geary said he’d had several conversations with young people interested in pursuing careers in law enforcement, and asking what courses to take in college. “We talked about the field of criminal justice,” Officer Geary said. “And I reminded them how important it is to stay out of trouble. One little mistake can end the career,” he continued, acknowledging that these days arrests are online and stay online.

One little boy asked Officer Geary how many police are on the force. “About 155 or 160,” he replied.

Geary explained to the little boy that Greenwich is made up of 67.5 square miles, and there are 14 different patrol sections. He also explained that the first stop for new officers, directing traffic on Greenwich Ave, is something of a rite of passage.

Officer Ryan Carino said he’d had several conversations with residents that were unrelated to policing. “They were asking me what my plans were for the weekend and where we’re from,” he said.

Officer Matt Swift said a number of residents were simply grateful. “The locals were thanking us for what we do,” he said. “It’s encouraging.”

Officers Brian Andronaco and Officer Hayes Sgaglio said there are three officers about to graduate from the academy, bolstering the Police force to its full capacity. Of the coffee with a cop event Andronaco said, “It  breaks down the barriers and shows people we’re normal people. It makes us approachable.”

“You’re not going to call us to invite us to your back yard barbecue but people see we can have a good time too,” Andronaco said. 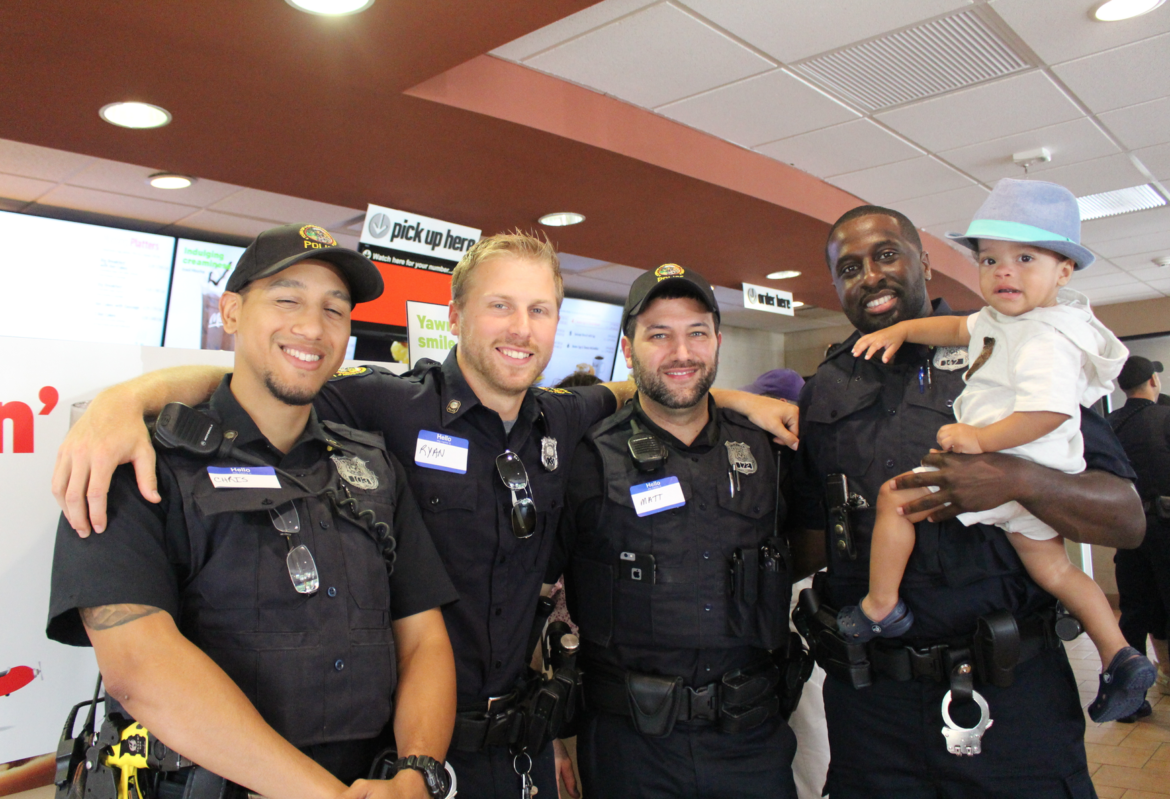 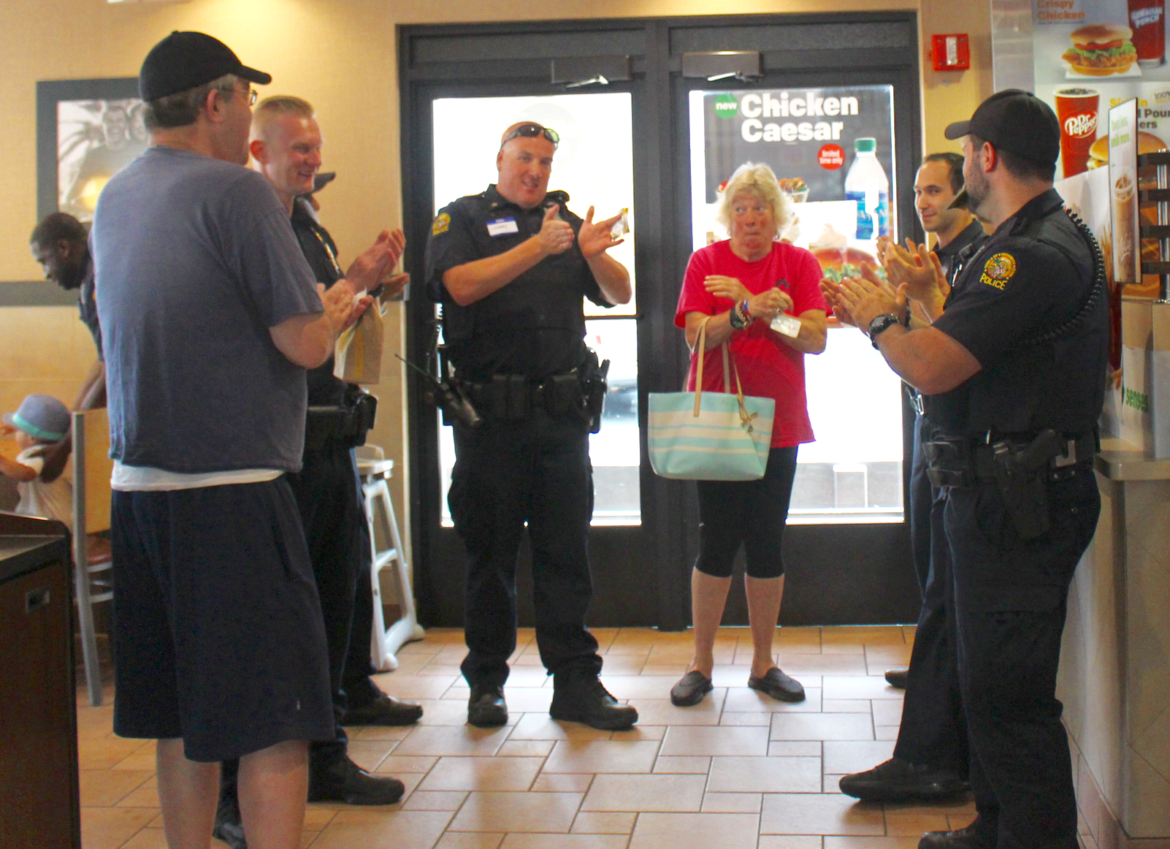 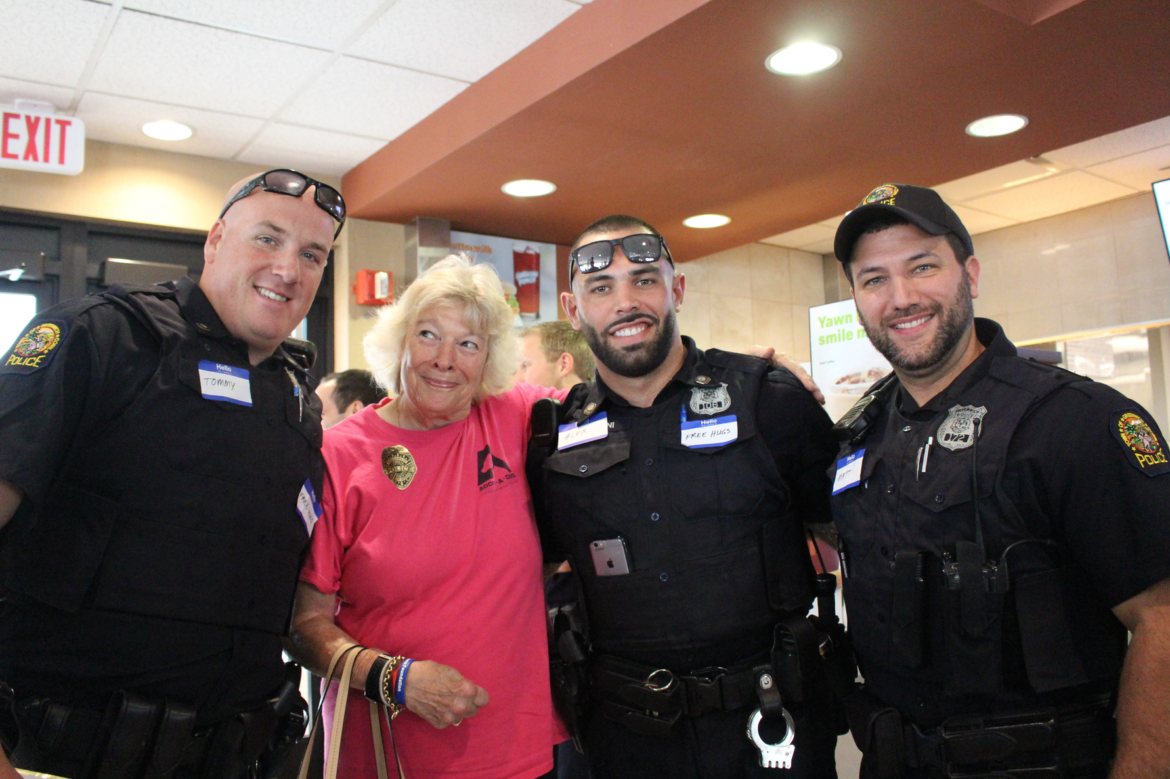 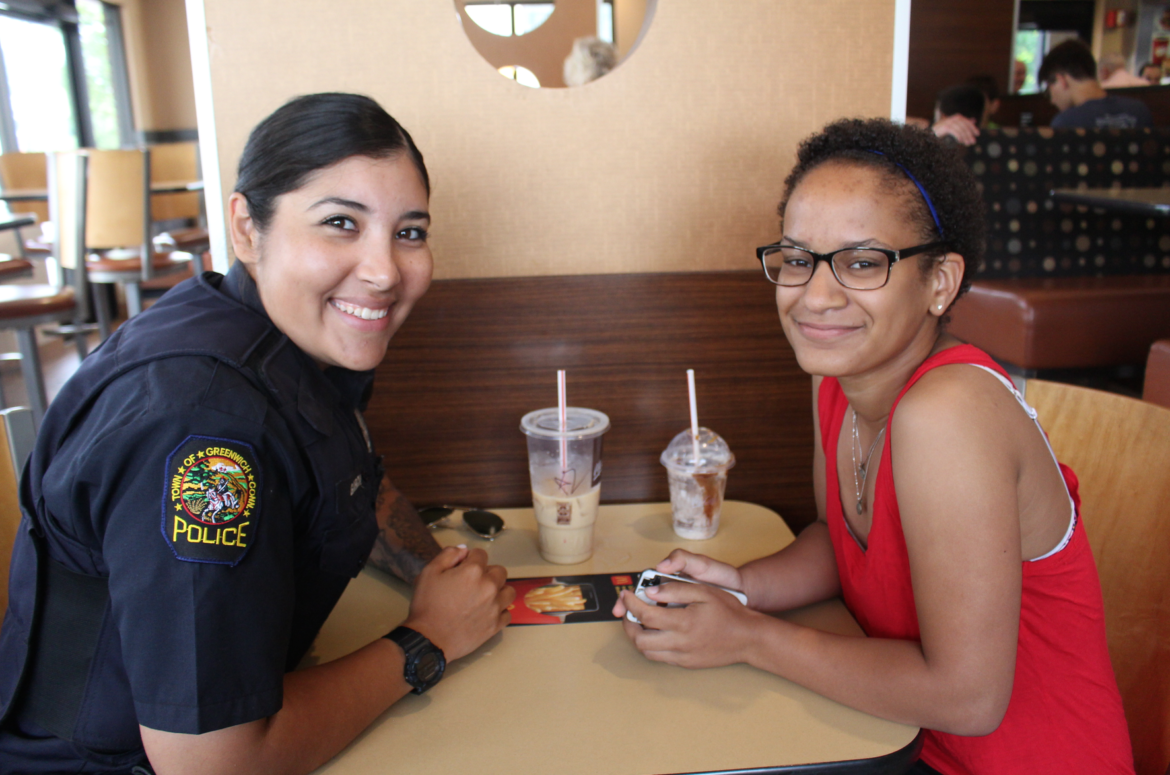 Officer Ericka Garcia chats with a resident at McDonald’s during the June 4 Coffee with a Cop event. Credit: Leslie Yager The manager from McDonald’s take a photo of a friend getting a big hug from Officer Heustis during the Coffee with a Cop event on June 4, 2016 Credit: Leslie Yager 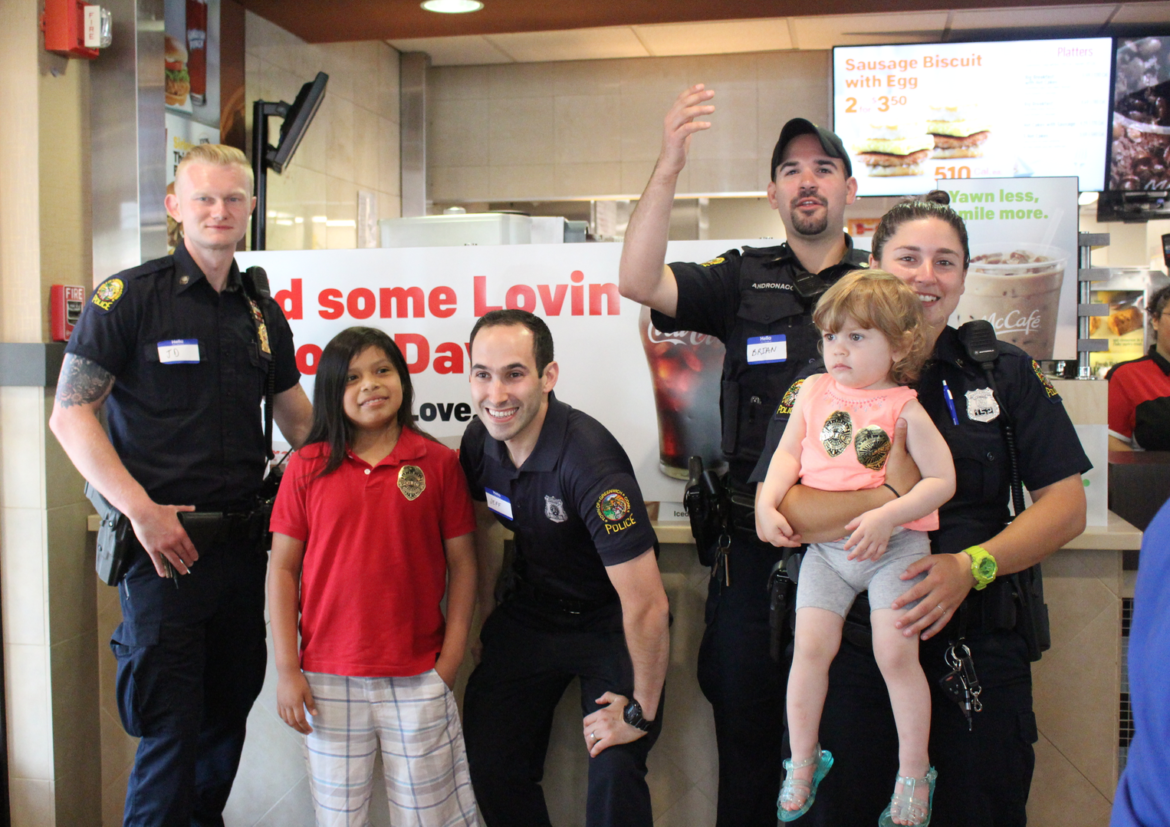 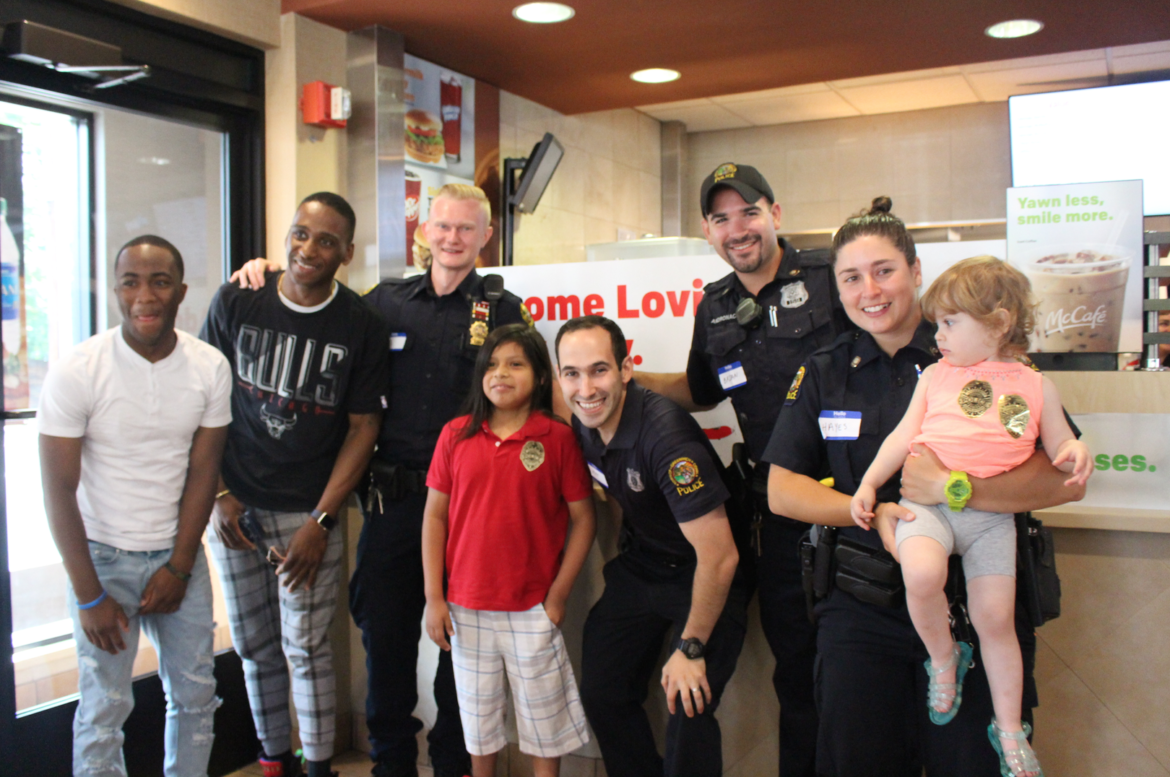 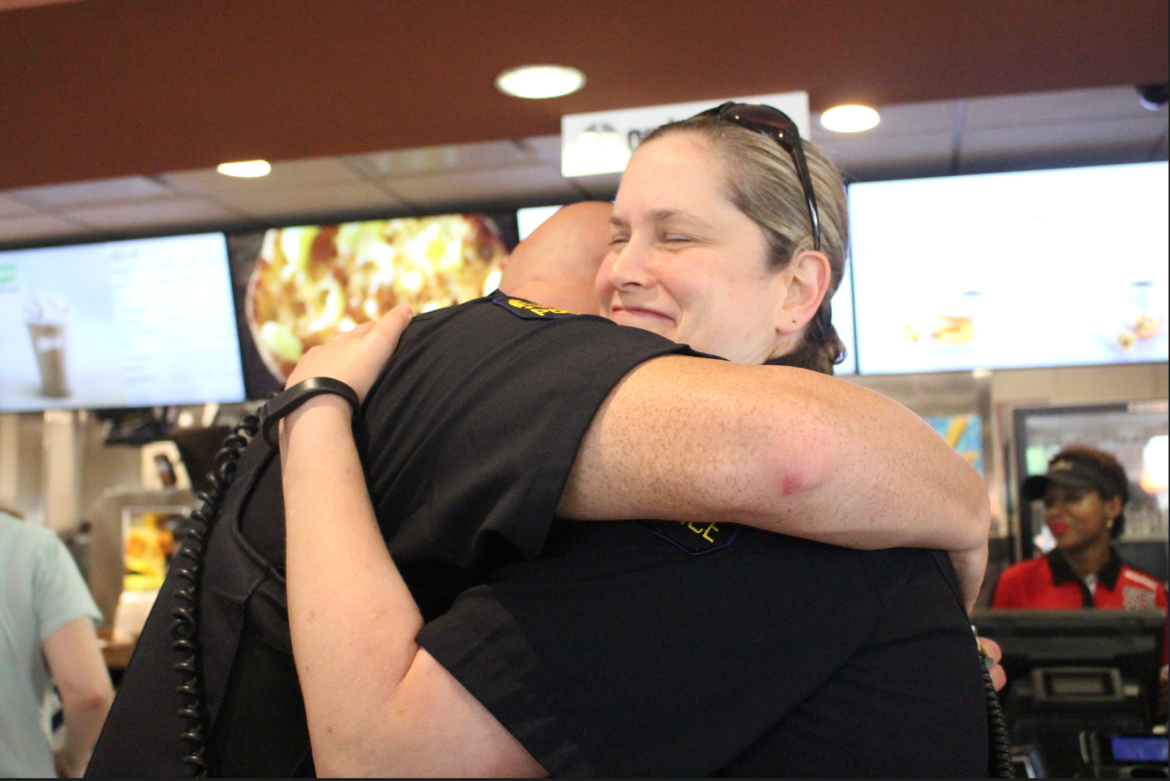 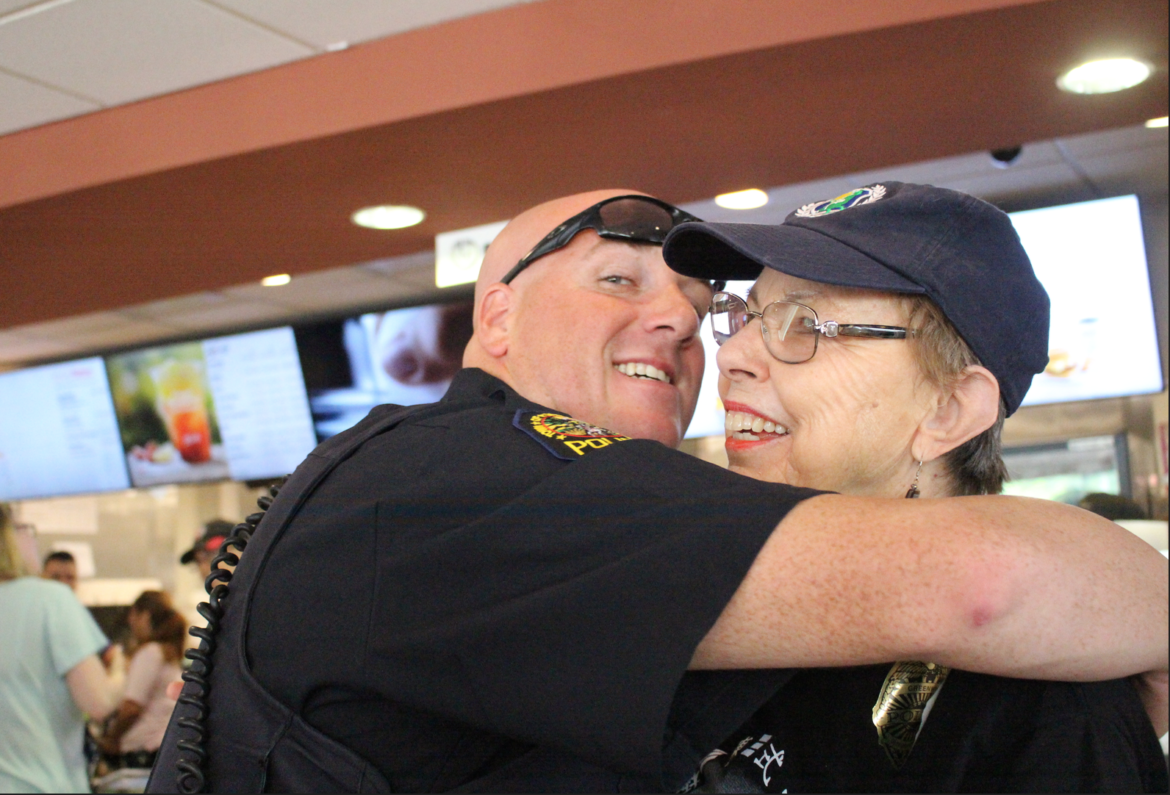 PHOTOS: Dodge for a Cause Tourney at Boys & Girls Club is Great Fun, and a New Tradition!