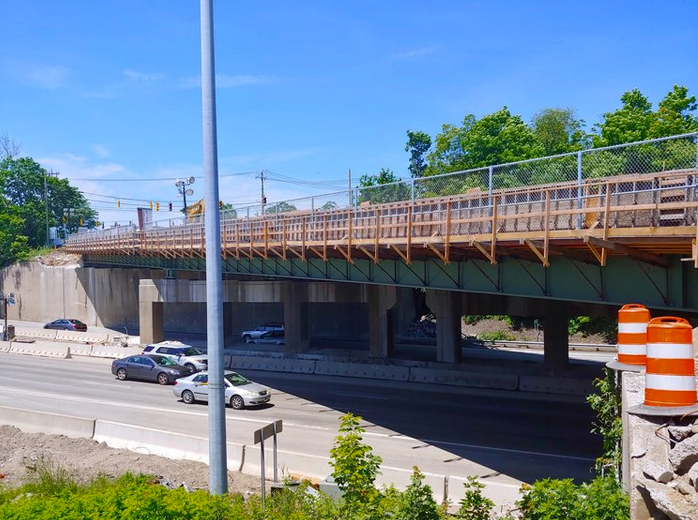 The Connecticut Department of Transportation’s bridge replacement project at Exit 9 on I-95 is done. In fact, it was completed early, finishing early Sunday morning instead of Monday morning.

The project was completed using a technique called “accelerated bridge construction.” Should the project have been executed otherwise it might have taken two years to complete.

The project team collaborated with CT State Police and local Police (Stamford and Darien) to manage traffic while roads were closed as vehicles were detoured around the construction.

Governor Ned Lamont applauded the work, calling it an example of “efficiency and innovation.”

During the two weekends the bridge was replaced all traffic was diverted off the highway.

Lamont said due to “flawless efforts” of those involved in the project there were no significant traffic delays in what is typically a heavily congested part of the state.

“We really must give applause to the DOT staff, construction crews and state and local law enforcement who were involved in this complex and innovative project,” Lamont said in the release. “Over the last two weekends, we saw the complete demolition of two bridge spans and the sliding in of new ones in what felt like the blink of an eye – and this all happened on the heaviest traveled section highway in our state, on a weekend in the summer. A project of this magnitude could have resulted in a nightmare on the highway, but everyone involved did an excellent job of communicating to drivers that they should avoid the area, and they were able to complete their work expeditiously. For that, I want to thank them.”

Greenwich Police Lt John Slusarz said, “The messaging worked.  People did what we asked them to do and everyone got to where they were going.”

Slusarz said that on the first Friday night of the project, there was a bit of a back up. Then, he said, “It was much lighter than on a normal Saturday. I’m sure it’s due to the messaging in advance. People took alternate routes and did everything we asked them to so they put the bridge in without difficulties and it was opened up earlier than expected.”