On Tuesday night’s Planning and Zoning meeting, the commissioners discussed at great length what to do about the application from Catterton for changes to the property at 599 West Putnam Avenue that the private equity company purchased for $21,930,000 in August, after renting it for 15 years. 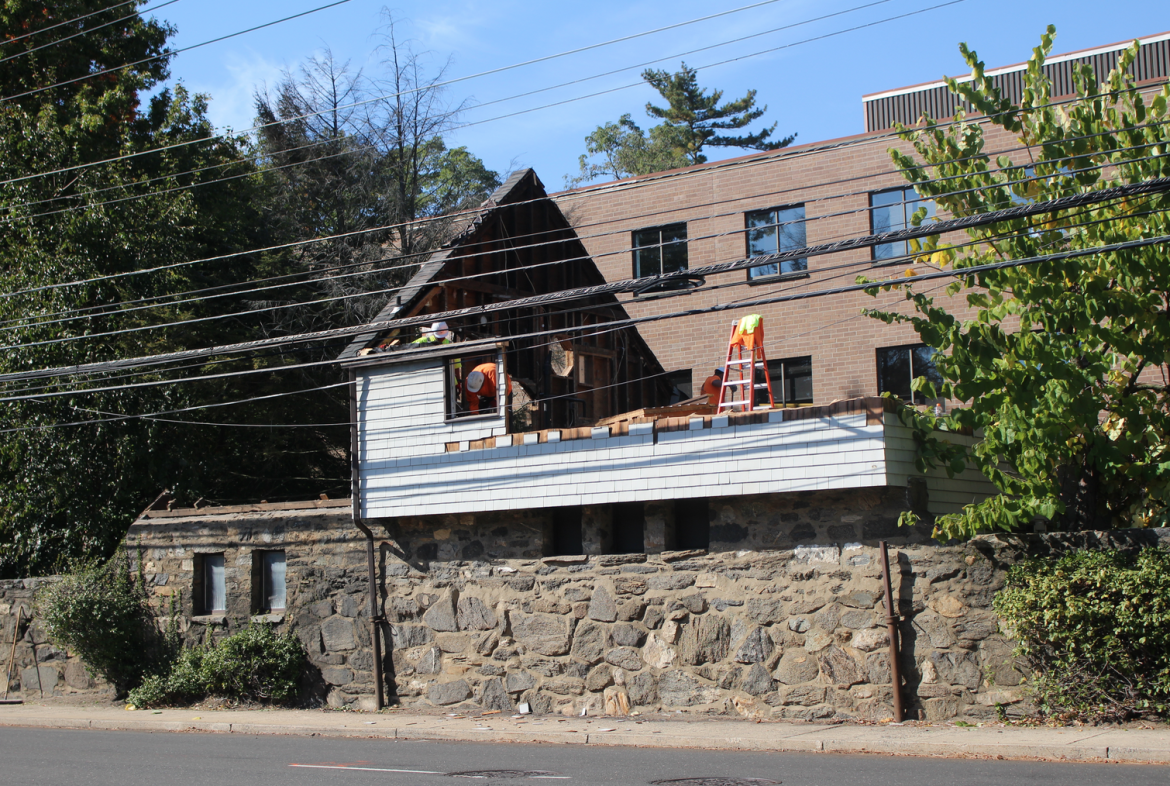 Most of the historic cottage was demolished just hours from a Planning and Zoning meeting at Town Hall where the application was on the agenda, 1:30pm, Oct. 20, 2015

What was at issues wasn’t so much the updates to the office building, which was built in the 1970s and looking dated in 2015, but how to respond to their insistence that the cottage built into the stone wall along West Putnam Ave was not historic or worthy of preservation.

In fact, the applicant repeatedly referred to it as an eyesore and pushed to remove both, citing safety concerns resulting from a narrow sidewalk and a desire to show off the soon-to-be-renovated office building to passers-by. 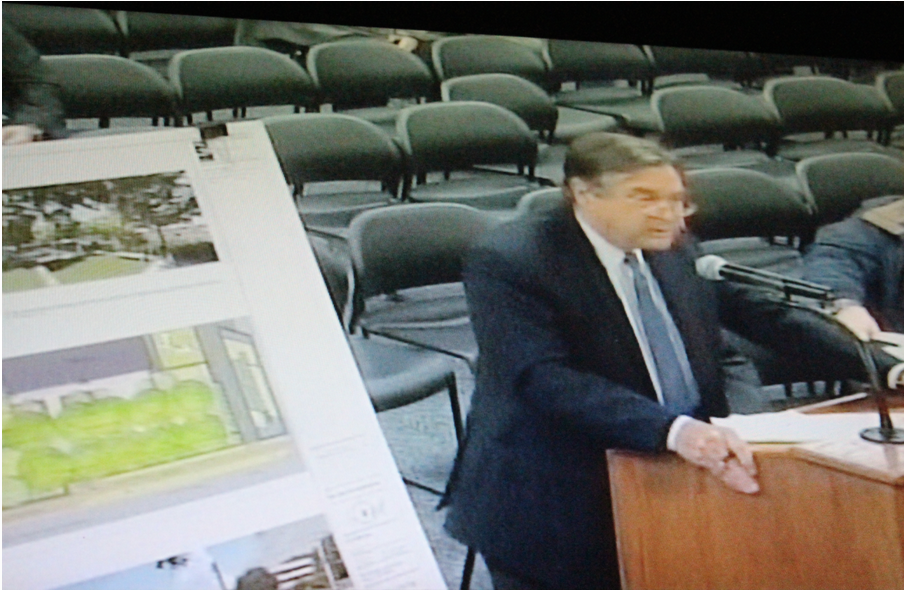 Stephen Bishop of HDC spoke during the public comment portion of the Nov. 10 P&Z meeting. “We were extremely disappointed to see that the building was demolished. Everybody loved this building. I can’t tell you how many people I talk to who say we love it.” Also, on Nov. 10, Davidde Strackbein, the chair of the board of the Historic Society, said the decision on 599 West Putnam Ave will provide an important example of how Planning & Zoning resolves tension between private property objectives and preservation goals for the long term benefit of the town. And, she said, “The nascent Preservation Network is both concerned with property rights and preservation policy in Greenwich.”

On Nov. 10 Catterton’s attorney, Ted O’Hanlon, from Robinson & Cole, and Sarah Vitek from Granoff grew increasingly testy with the commission, and voices were raised. It didn’t help their case that Catterton had gone ahead and demolished the cottage that dates back a century, despite having promised not to do so until a compromise was made. 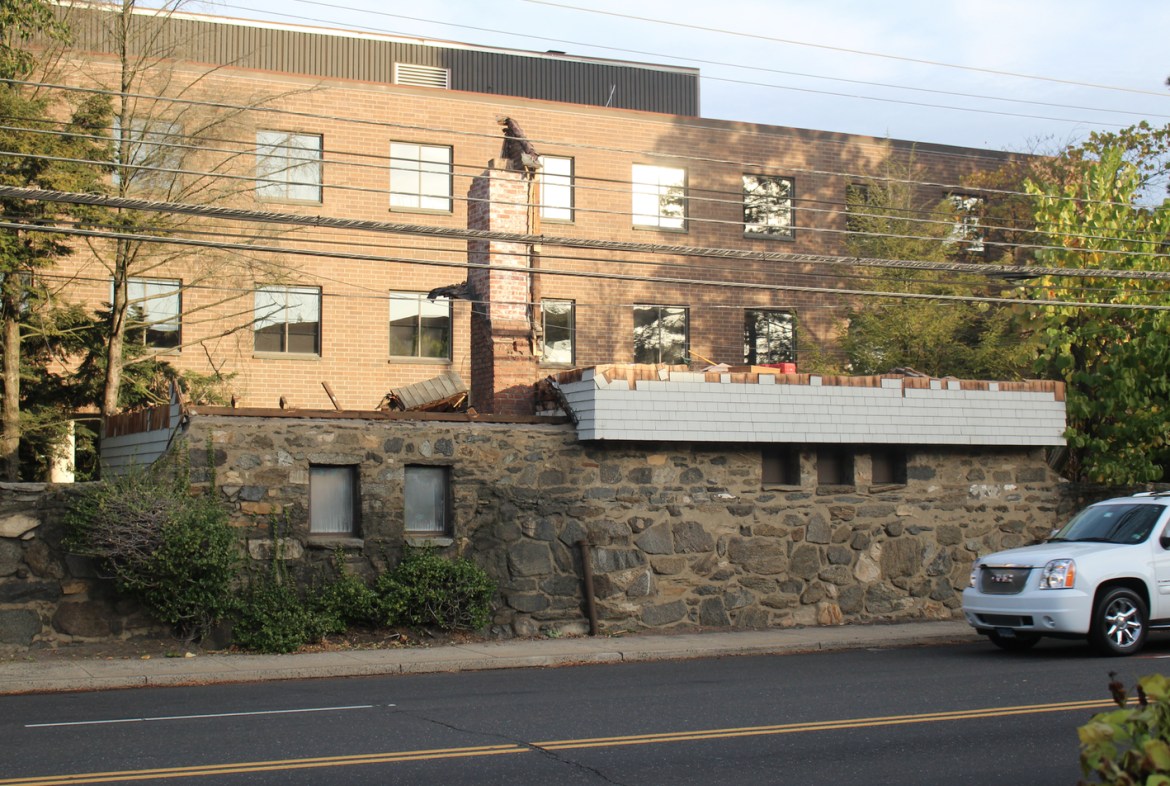 Mr. O’Hanlon acknowledged that the  demolition of the cottage was a mistake, but that his client did not value it or want to keep it.

The cottage was 3/4 demolished before the town stopped the work.

What ended up happening after the lengthy discussion on Nov. 24 was the commission did approve the application, but not before working through major disagreements among the commissioners. At one point it was suggested they put off the decision for a future date. The application was finally approved, but with quite major modifications.

Catterton will be required to maintain the majority of the stone wall along West Putnam Avenue and, in particular, the entire area of the cottage and archway.

The commission decided that the wall itself is significant and has both architectural and historic value, in addition to contributing to the streetscape.

The P&Z also weighed the historic value of the stone wall with public safety, considering the narrowness of the sidewalk along the busy stretch of West Putnam Ave, where cars whiz by and through the green light at high speeds. As a result, the approval includes moving some sections of the wall back in order to have a much wider sidewalk.

The commission is requiring Catterton to construct a “ghost structure,” a concept that had also been referred to as a “folly.”

The idea is to construct a frame of the structure that previously existed as a nod to history, and in the case of 599West Putnam Ave, the folly will give context to the stone wall, which had served as the front of the cottage and has openings which served as the cottage’s windows. 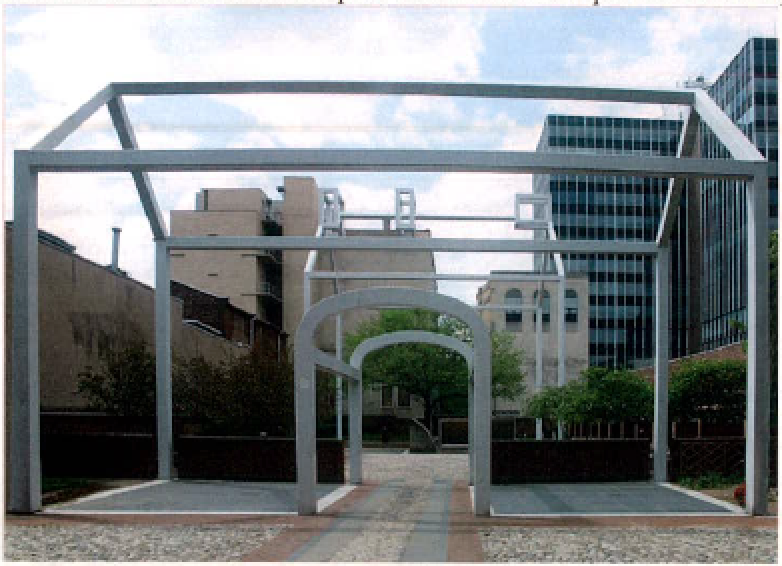 The commission decided to only require a ghost that mimics a portion of what was demolished. Specifically, the ghost will replicate the section of the garage, which was the smaller wing of the original structure.

The reasoning, according to the commission, was that the cottage, circa 1914, was deemed historically significant back in 1977, but subsequently underwent major improvements in 1979, leaving little of the cottage’s original composition.

After exhaustive discussion on Nov. 24, the commission agreed around 10:30pm that what was remained of the cottage before the premature demolition was not original. Hence, they deemed it was less significant than when the HDC opined in the 1970s.

P&Z to Catterton: Do Some More Homework on Stone Wall and Cottage at 599 West Putnam Ave (Aug, 2015)